…hmm? Oh hey, what are you guys doing back so soon? I appreciate the enthusiasm, but I generally only post on Mondays. So unless you were really banking on me having unexpected inspiration, showing up on Wednesday or whatever day it is right now seems uncharacteristically optimistic.

What do you mean, ‘it’s Monday again already’? That doesn’t make sense. I posted the previous review like, yesterday. And then I decided to boot up Stardew Valley again, for the first time in like a year. But just to check out my old farm. And maybe look at some of the new possible farm layouts. That’s it!

What do you mean, ‘you played like thirty hours of Stardew Valley last week’?

What do you mean, ‘you were well aware of the effect this game had on you last time, and could have known in advance that it would drain all your time and energy, leaving you stranded on the couch in a drawn-out attempt to synchronize crop cycles and give jars of mayonnaise to everyone in town’?

What do you mean, ‘this particular framing device loses power through repeated over-use’? 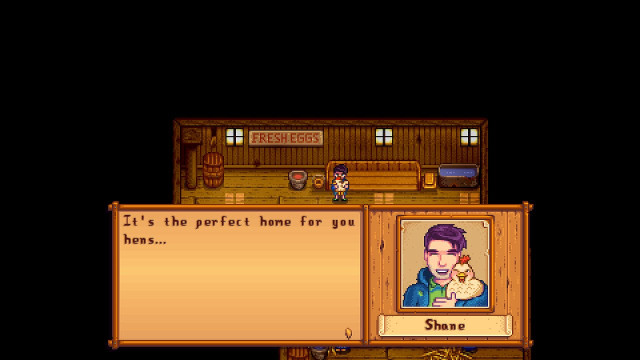 What do you mean, ‘chickens are great and Shane should hug them mo’ — no, actually, I totally get what you’re saying here.

Okay, okay, for real though: I got sucked into Stardew Valley, meaning I don’t have anything to review this week, and I apologize. This might mean I needed some time away from playing games through a critical lens, but I still try to be more up-front about these things. Springing it at the last minute isn’t cool.

In lieu of a new review this week, a fun thing you can do is re-read my old Stardew Valley review, which still pretty much stands — up to and including the part where it attempts to claim all my free time, everywhere, forever. Given that this review was written on launch, though, you’ll have to mentally append the following new features:

“Jarenth, you should play Stardew Valley!”

One-man-wonderteam ConcernedApe‘s Stardew Valley was by far the most requested review game of the last few weeks. Mostly by virtue of the fact that it was requested at all. And all the articles and thinkpieces I saw coming out about it certainly didn’t harm my interest either.

I was hit with two thoughts in quick succession while doing my bare preliminary research on what Stardew Valley was and what I should expect. The first, based on screenshots and a handful of half-skimmed gameplay overview and diaries, was something that I have to assume is a common refrain in reviews for this game: “Wow, this game looks a lot like a carbon copy of Harvest Moon.”

And the second, right after that: “Sweet. I love Harvest Moon. Been ages since I played some. Let’s roll!”