Heya, readers. It’s been about a week and a half now since the last Jarenth Plays Beyond Earth episode hit monitors world-wide, which means it’s about on-schedule for me to write about the whole thing. Yes, I’m not very expedient in these things sometimes. To compensate, I’ve also updated the Beyond Earth Let’s Play page to completion. So if you’ve ever wanted to jump to your favourite episode without all that clicking-through-the-archives-hassle, now’s your chance.

END_OF_DOCUMENT_TOKEN_TO_BE_REPLACED

In the last episode of Jarenth Plays Beyond Earth, I stopped Vadim Kozlov’s plans for world domination and advanced my own plans to operational status all in one fell swoop. Yeah, that’s efficiency for ‘ya. I hadn’t really been keeping up on the narrative direction the Supremacy victory path was going, but it turns out my self-identified villain role in this narrative was amazingly serendipitous: the last step of Operation Emancipation is to send a sizable army of battle robots to conquer Old Earth, and to forcibly convert everyone there to the Supremacy Affinity. To upgrade them, if you will, to a new kickass robotic standard of living. Under my command, yes, but hey: what’s a little thing like free will and bodily autonomy when compared to the end of all death and disease, superior intellect and the destruction of language barriers, the incomparable sense of unity that can only come from being networked to every mind on the planet at once, and built-in jet boots? Old Earth’s humanity may be putting up a fight right now, but they’ll thank me once I complete my conquest.

If I complete my conquest. Remember: Vadim Kozlov may be down for the count, but I’m still not the only one playing for all the marbles.

END_OF_DOCUMENT_TOKEN_TO_BE_REPLACED

In the last episode of Jarenth Plays Beyond Earth, I brought the fight to Vadim Kozlov. I spent turn after turn blasting away at the walls of Konechno, desperately trying to break through to Vadim’s domain so I could stop him from… bringing settlers over to Earth, I guess? I’m still not 100% on the details of this master plan, but as far as I can tell, Vadim is trying to fulfill the promise of finding new homes for the people on Old Earth that we started the Seeding with… and I’m trying to stop him from doing that. Which means that, yeah, it’s a good thing I already had my ‘I am 100% the villain’ realization a little while back. Rescuing the stragglers of a broken world, huh, Vadim? Not on my watch.

Oh, your Earthling Settlers already have a small town on the surface of Terra Atlantea? We’ll just see what my giant death spider has to say about that. 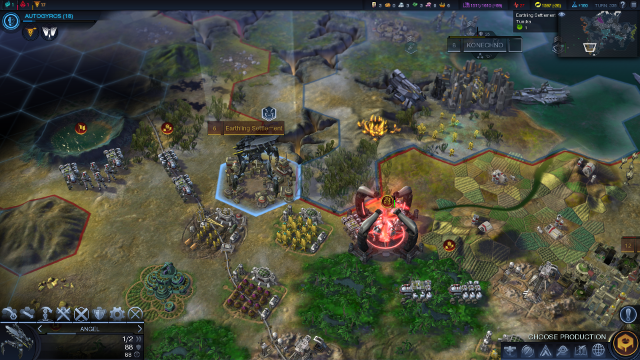 Because if I’m gonna go the ‘horrible monster’ route, I might as well go all the way.

END_OF_DOCUMENT_TOKEN_TO_BE_REPLACED

In the last episode of Jarenth Plays Beyond Earth, General Vadim Kozlov made his move for the end game. Like I always knew he would. He timed it perfectly, too, waiting until I was just about to launch my final attack on Hutama. Did he think I’d be too consumed by bloodlust to even pay attention to him, perhaps? “I’ll let the world burn if Hutama burns with it”, that sort of thing? It wouldn’t be entirely unexpected of me, I’ll be the first to grant that… but no. Under absolutely no circumstances will I just sit back and let Vadim Kozlov snatch up the victory. Not after everything that happened. Not now, not ever.

Last episode was, to put it bluntly, a mad dash to get my forces to Slavic Federation lands before Vadim achieved his final victory. I contracted Suzanne to run early interference, but knowing Beyond Earth’s AI, I have absolutely no illusions that she’ll actually fight this war to its necessary conclusion. No, thwarting Vadim will be entirely up to me. And now that, after about a dozen turns, my warships have finally made landfall, it’s probably no exaggeration to say that this conflict will be nothing less than the final battle ever to be fought over the future of Terra Atlantea.

END_OF_DOCUMENT_TOKEN_TO_BE_REPLACED

In the last episode of Jarenth Plays Beyond Earth, I daresay I kicked Hutama’s Polystralian ass from here to breakfast. Even though his impressive rise through the technological ranks allowed him to keep pace with me on a quality level, the combination of his failed assault on Gran Éxito — come for the sunk Polystralian warships, stay because we still haven’t figured out a way past the aliens — and a lack of focus in his movement and unit choices meant I was easily able to sweep past his defensive army. I took the city of Maeva back and made it mine forevermore, and I set the city of Rahi on fire as a signal that you do not mess with Franco-Iberia.

Now, my armies are stationed in the ocean strait and on the coast just outside Freeland, Hutama’s capital. Poised to slag Hutama’s final defenses, conquer and burn his capital city, and end any possible threat that the Commonwealth of the Pacific could ever pose to me in the near to far future. And man, am I looking forward to this. This should be good.

END_OF_DOCUMENT_TOKEN_TO_BE_REPLACED

In the last episode of Jarenth Plays Beyond Earth, I survived Hutama’s dastardly and unprovoked attack on colonies that are entirely mine, have always been mine, and history books will show were never initially his to begin with. Sure, Hutama took one of those mine-not-his colonies for himself… but between me repelling a secondary attack on Gran Éxito, Samatar and Suzanne going to war on my behest, and me spending Energy like a drunken sailor on shore leave to rapidly build a sizable army — so nothing like a sailor on shore leave at all, then — I don’t really see this unlawful occupation lasting longer than a handful of turns. At best.

I mean, I don’t see Hutama’s entire civilization lasting more than a handful of turns at best, at this point. But let’s not get ahead of ourselves re: the terrible vengeance I intend to wreak. Take back colony first, stomp Hutama into dirt and cinders second.

END_OF_DOCUMENT_TOKEN_TO_BE_REPLACED

In the last episode of Jarenth Plays Beyond Earth, my long-standing alliance with Suzanne Fielding of the American Reclamation Cooperation very swiftly and unexpectedly crumpled to dust over the course of a handful of turns. It was a frankly upsetting experience, and it took me a little while to adjust to what from my perspective was the fastest face-heel turn in recorded history. Well, Terra Atlantean history, anyway. And then, just as I was getting ready to consolidate my armies back in my home territory and mope… I discovered that Hutama had been massing a fleet and a small army right outside the city of Maeva. The city, you’ll remember, he originally ‘gave’ me to end our earlier war. And while I don’t want to be overly skeptical, right now, I can only assume he’s experiencing some serious gifter’s remorse.

Basically, what I’m trying to say is that last episode was not a good day. And prospects for today are… not particularly rose-coloured either.

END_OF_DOCUMENT_TOKEN_TO_BE_REPLACED

In the last episode of Jarenth Plays Beyond Earth, I scared Vadim Kozlov into submission. And by ‘submission’ I mean ‘paying me a large stipend of Energy and resources to stave off an unnecessary war that neither of us were really looking forward to in the first place’. Honestly, I probably wouldn’t have engaged in any actual fighting anyway… but it was good to see that, as much as I’ve been fretting over Vadim, he’s apparently at least as afraid of me as I am of him.

Now, with Vadim’s… I’m tempted to call it ‘surrender’, I’m now officially the toughest guy around. Big man on campus, as I said last episode. It’s a good feeling! I can basically strut around and do whatever the hell I want without anyone interfering. I mean, who would dare? So I’m pretty sure this development means that nothing bad will ever happen to me again, ever, until the end of recorded time.

END_OF_DOCUMENT_TOKEN_TO_BE_REPLACED

In the last episode of Jarenth Plays Beyond Earth, everyone on Terra Atlantea up and decided to start wearing new clothes. Everyone! Even Hutama, sneak-mongering bastard that he is, seems to have taken my advice re: getting a better tailor to heart. Let’s hope he’s equally receptive to my other advice, which involves never ever messing with my civilization again under penalty of obliteration. 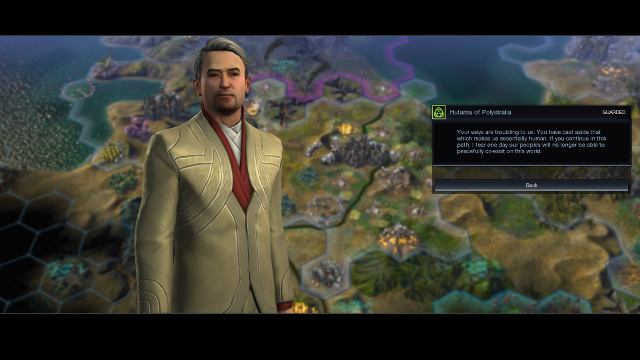 Seriously though, that suit looks *much* better on him.

Oh yeah! And Vadim Kozlov decided that it’d be a good idea to start colonizing my shores. In the very last paragraph of the previous episode, I’d just discovered a very recent Slavic Federation Outpost fouling up the place. And I’m… I’m not actually as angry about this as I figured I would be? In a way, I can respect Vadim proactively trying to keep tabs on me. As if he doesn’t have his best operative in my capital anyway, but I digress. Settling an Outpost on my shores is a perfectly valid move from a tactical perspective, and I’m not about to throw a hissy fit over it.

I will probably burn it to the ground, though.

END_OF_DOCUMENT_TOKEN_TO_BE_REPLACED

In the last episode of Jarenth Plays Beyond Earth, I discovered incontrovertible proof of alien life and the possibility of time travel. I then proceeded to blithely ignore all of that… where by ‘I’, I mean ‘Beyond Earth’. Man, I’d have loved for this whole political squabble over land and ideologies to just like that fall by the wayside as a result of this! Who were these past aliens? Why did they bring one human being back in time? How does their time travel work? Can we replicate it? Should we replicate it? What do these discoveries mean for literally every truth we human beings hold self-evident? Who cares about that? Let’s go back to fighting wars over shiny minerals and floating rocks, am I right?