CrossCode wears its aesthetic influences on its sleeve from the word go: Every thing about this title screen, from the colour palette to the font choice to the button style to the soothing piano tunes, evokes an air of late PS1-era, maybe early PS2-era RPGs. 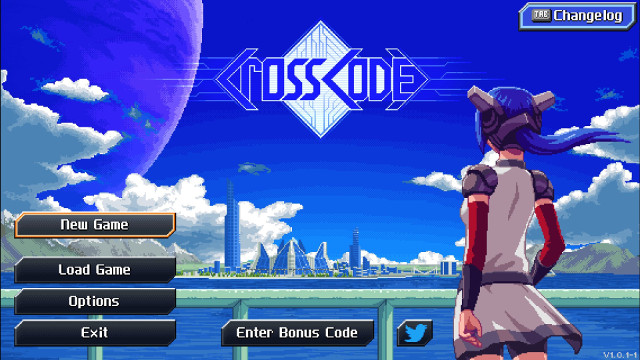 If you think you can imagine what that piano track sounds like, you’re probably right. But feel free to go to the official CrossCode site to check — scroll down and you’ll find the entire soundtrack, free to stream.

For real though, look at these menus! I am genuinely surprised that this game is PC-focused, and in fact PC-exclusive (at time of writing). If Radical Fish Games was intentionally going for this console-RPG style affectation, they pretty much nailed it. 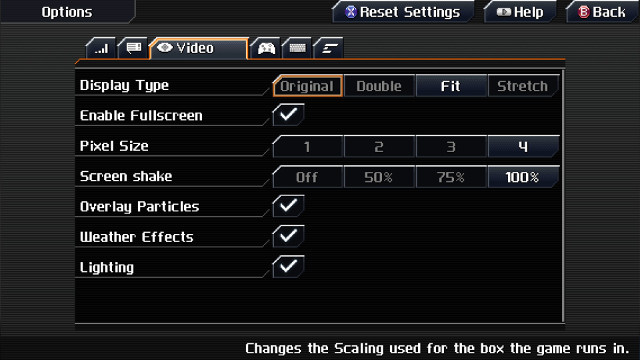 Don’t worry, though — while the video effects are as limited as you’d expect, the controls are fully rebindable for mouse/keyboard and partially flexible for gamepad controls. 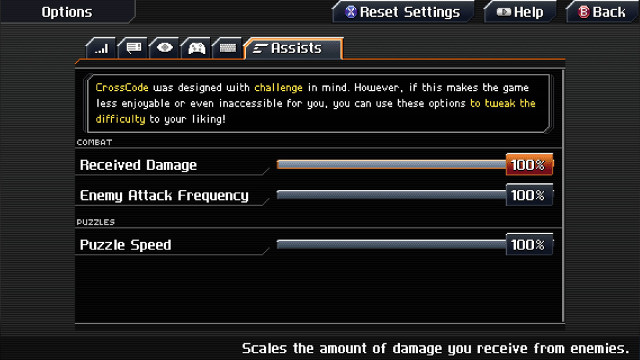 Radical Fish Games has got you covered.

Much as I appreciate the style, it does mean this main menu doesn’t have a whole lot to talk about. Unless you’re really interested to hear about ‘bonus codes’, and I can tell you: I’m writing this in the future and I still don’t know what those are. So without further ado: 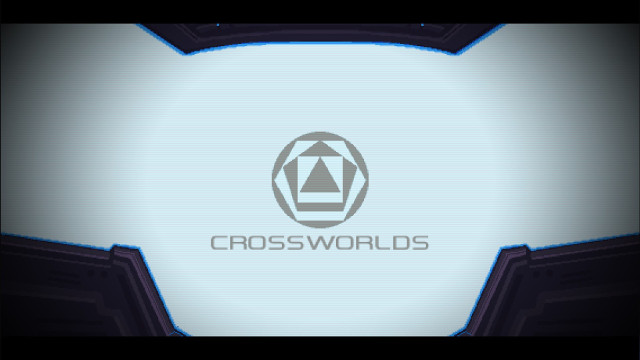 Then, more detailed things are happening. 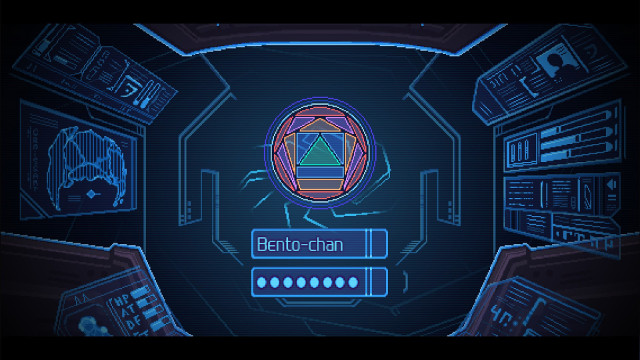 Seems like someone named ‘Bento-Chan’ is logging onto something. 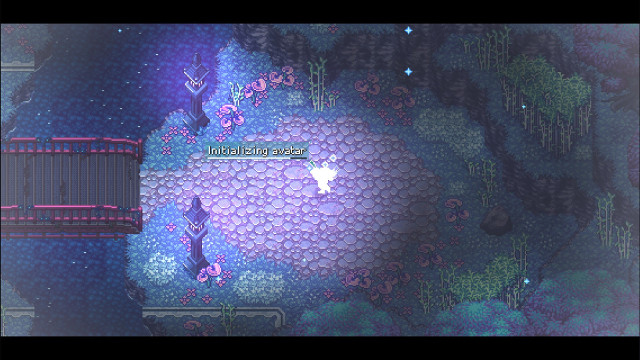 I stress again that, at this point, I don’t know anything more about what’s happening than you do.

The human figures initializes into a black-and-red-clad woman with a funky headset. She runs onto a nearby bridge and scowls at nobody in particular. 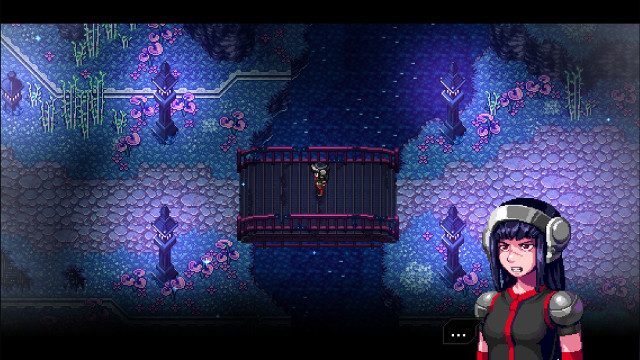 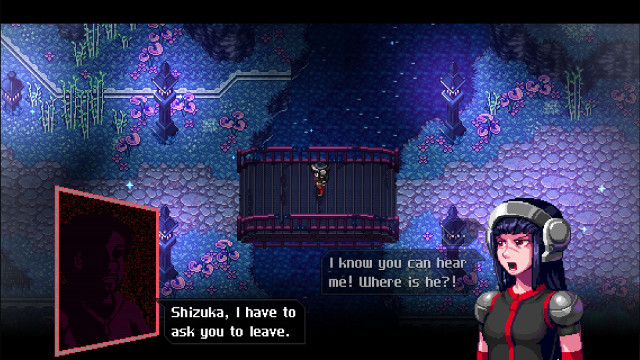 As if on cue, the universe provides her with someone to scowl at.

The woman and the unclear figure in the red window exchange some words. She’s looking for ‘him’, believing ‘they’ are keeping him here. They tell her, Shizuka, that time is running short, and she needs to leave. She accuses them of abducting a sick person and working him to death, which if I’m being honest sounds pretty bad. They respond by disappearing.

This is my cue to start learning the game. 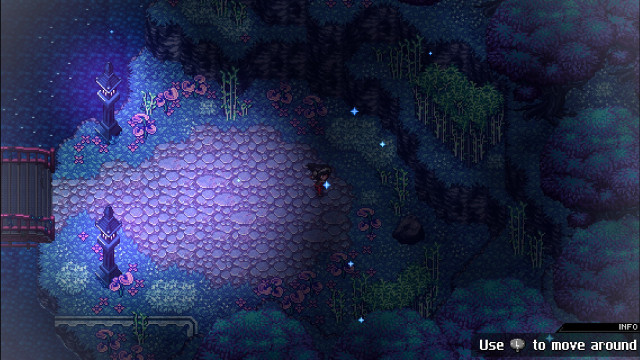 CrossCode supports gamepad and mouse/keyboard controls; I’ve chosen the former, but from quick experimentation the latter seems to work just as well.

I run Shizuka around the area a little, then over the bridge and up the one path available to me. The mystery figure pleads with me to stop going further, as if that’ll work. Eventually, they resort to harsher measures: Summoning a trio of floating warrior robots! 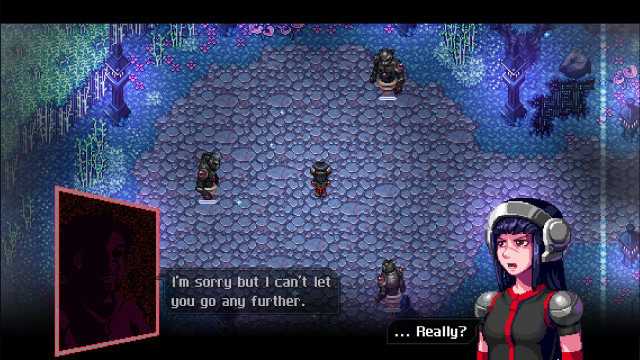 From Shizuka’s reaction, she seems *unimpressed*.

One takes a swing at me! 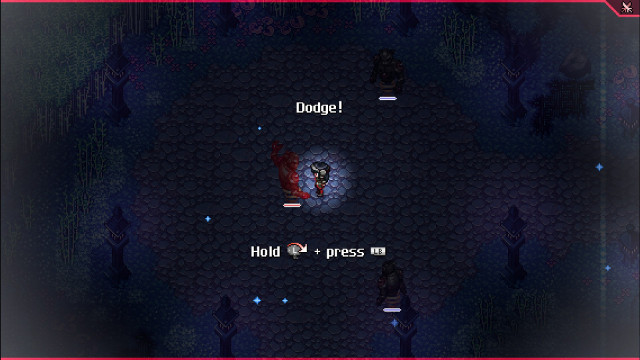 Left button makes Shizuka leap out of the way. Right button makes Shizuka retaliate, in the form of punches. Or maybe sword swings; I’m not too clear on what exactly is happening. What I do is that damage numbers start appearing over the robots I hit, while little red bars beneath their selves go down; the universal game shorthand for ‘you are beating the crap out of this enemy’. 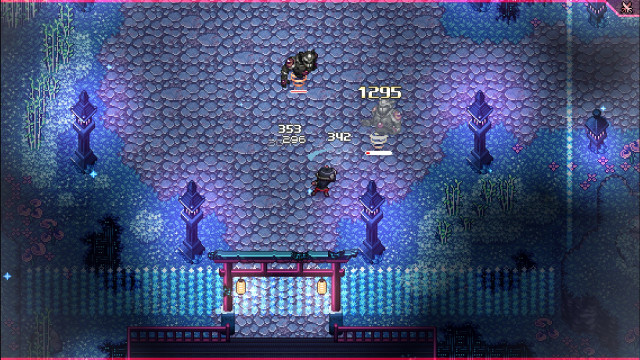 Ooh, bigger numbers — the universal shorthand for ‘you just beat that guy even harder than you normally do’.

Robots thus defeated, we move to the next area — where more robots are summoned. These ones have icicles on their shoulders, though, which Shizuka identifies as them being Cold-aligned. 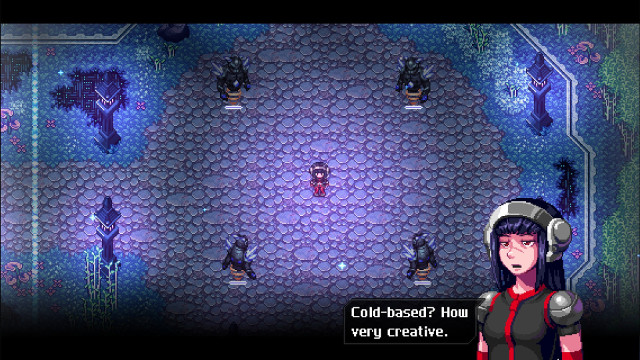 She retorts by shifting into Fire elemental mode and going to town. 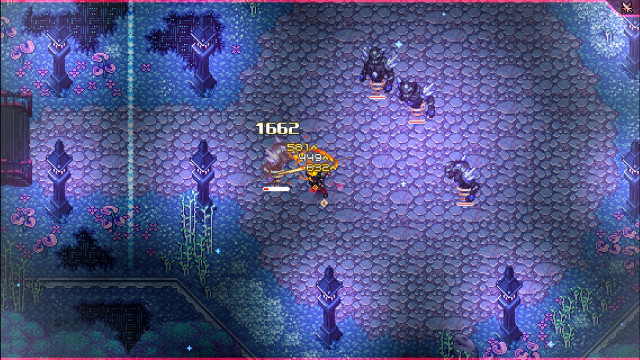 I say ‘she’ does this, because — while I’m technically taking the actions — I’m still very much in the passenger’s seat.

The shadowy figure tries one last trick: In the courtyard before the house we’re apparently trying to reach, he surrounds Shizuka with no less than eight Cold-aligned robots. A close circle, locking her in.

I’ll give you one guess as to how that ends. 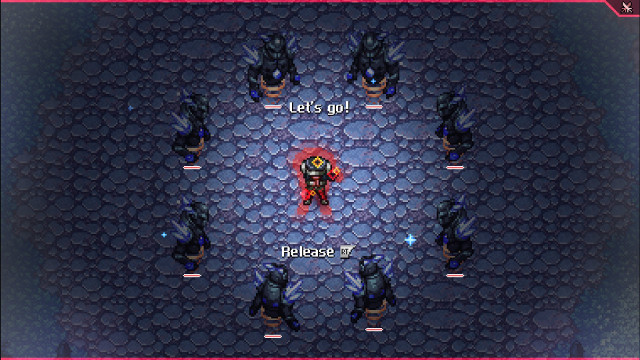 This goes the way you think it goes.

Shizuka enters the house, and…

And, er… some things happen. 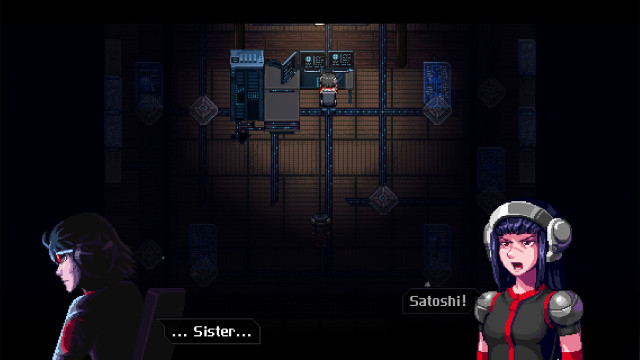 Now, normally, I wouldn’t shy away from going into detail about these things. Unless it’s really spoiler-sensitive, the first few minutes of a game are pretty much fair play, as far as I’m concerned. I’m avoiding that here for two reasons, though: One, what happens is a long text exchange between two characters I barely know, involving opaque references to something I don’t understand, which has all the appearance of heavy-handed foreshadowing. And two, once the scene plays out and the short following cutscene ends, I’m suddenly someone else completely. 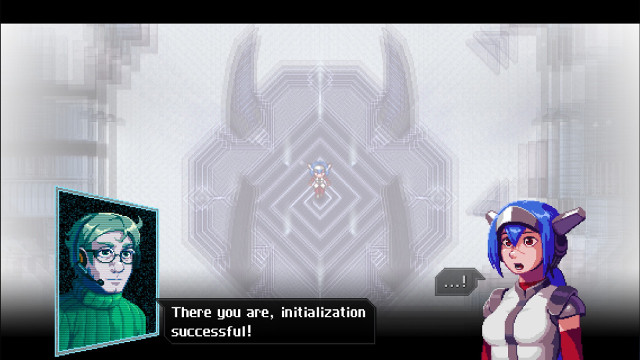 No, not turtleneck guy.

I’m suddenly this woman, whose hair is much more blue and whose headphones are much more horn-like. And I’m talking to a decidedly non-shadowy window figure, one with a more defined sense of style than the previous one. Except he’s doing all the talking, as my character can’t — a ‘speech synchronization malfunction’ renders her incapable of saying anything.

Instead of introducing himself, or me, or contextualizing literally any part of anything that’s happened so far, Turtleneck Man decides to teach me about throwing balls. 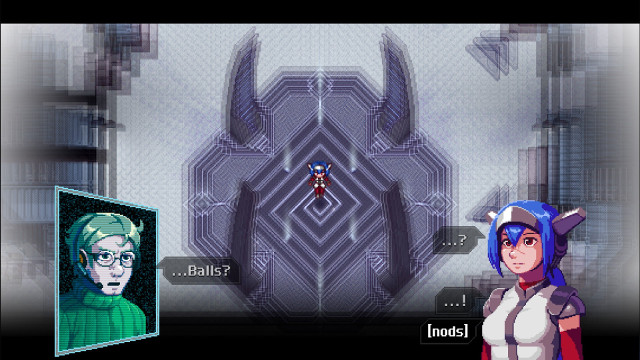 It goes like this: I can throw balls by aiming with the right click and clicking/holding RB. Initially, balls are thrown in a wide cone, but the longer I aim, the tighter that cone becomes, until finally it’s a line. If I hold off on throwing for a few seconds while the aiming area is a line, the next shot will be ‘charged’, doing extra damage and bouncing off walls a few times. 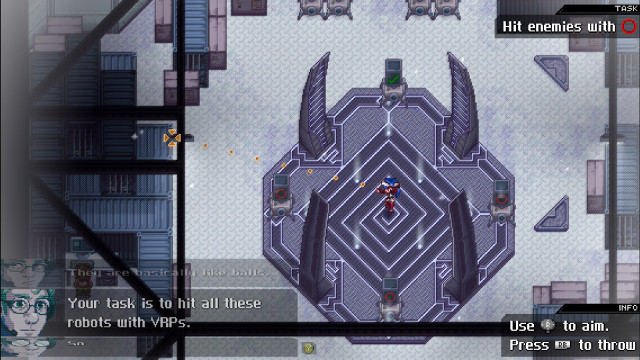 It’s surprisingly hard to get a shot of the balls in-flight.

I am then told to practice my new skills in a fancy multi-level obstacle course, under the guidance of Carla — the first actual person I’ve seen so far! 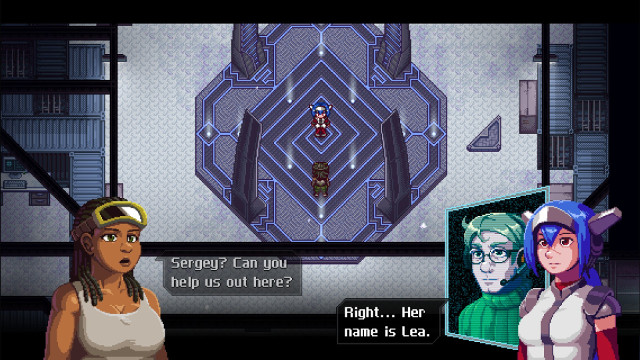 As if on cue, everyone gets a name!

The fancy obstacle course serves as a more freeform tutorial area. The goal in each area is to get to the exit, but the levels are laid out such that I organically learn some cool tricks — with Carla standing by to give me hints, if I need them. For instance: A big thing is that unlike many other isometric RPG protagonists, Lea can jump! She can jump up small elevation changes by walking into them, and jump down any edge, no problem. Through example, CrossCode quickly makes clear that this is going to be a major gameplay element. Almost every obstacle course involves jumping puzzles and obstacle hallways, and when I start needing to hit target switches, the crates that make up the level are nearly always an aspect; sometimes I need to bounce balls off the container walls to get around other containers or hard-light barriers, while other times the switch is on a higher elevation level and I need to figure out how to get up high myself. 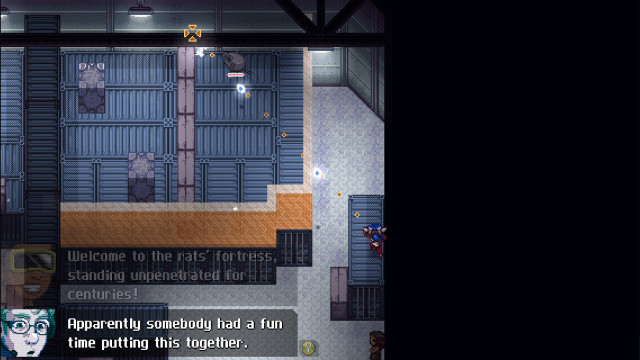 See how quickly I strung together a bunch of new gameplay elements? That’s what CrossCode does, too.

Other things I get acquainted with include: Two different types of hard-light wall, neither of which I can move through — but one of which my balls can ignore. Enemy counters on the floor, a prelude to a choreographed fight — I’ll need to defeat X enemies to move on. Destructible boxes. Indestructible boxes! And, of course, sword-fighting and dashing, two things I’d already learned before. 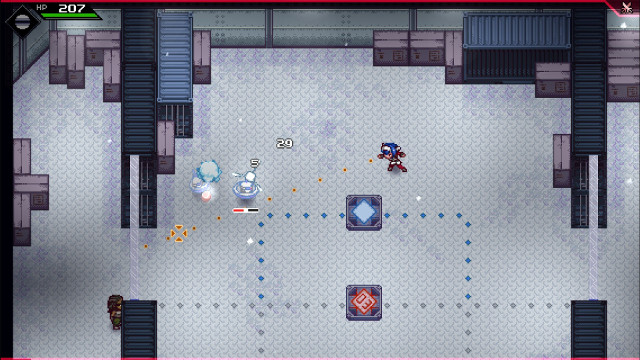 Pictured: Lea, fucking up some robots.

I finally make it out of the cargo hold and onto the… ship? I’m on a container ship, okay, this is fine. The captain, Jet, is a grumpy-looking man with a jetpack. 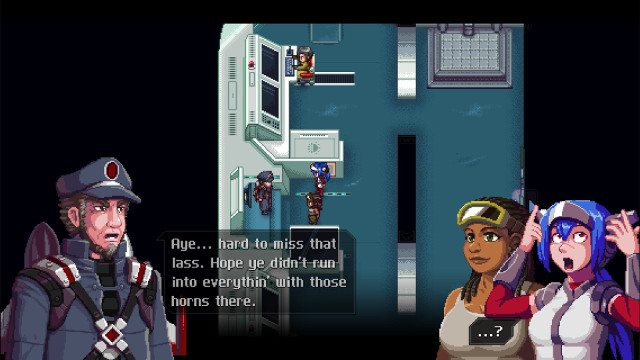 Lea learns she has horns.

And finally, finally, CrossCode decides to start telling me shit. The Cliff’s Notes is this: The ship I’m on is headed towards CrossWorlds, which is basically a real-world MMO. Meaning, the space is real, but the people are fake. People play CrossWorlds through ‘avatars’, fake bodies created from instant matter, and yes, this is starting to sound like Avatar meets Westworld a little bit. At any rate, Lea herself is such an avatar — or maybe it’s more accurate to say that there exists a player called Lea who controls this avatar, also called Lea. Which means that Lea is… me? Listen, it’s complicated.

And it gets more complicated still!

It turns out that Lea has amnesia, the convenient plot kind, where she doesn’t remember even a single thing from before game start but she did immediately remember how to throw balls. That’s actually a thing that exists, I don’t know why I’m dissing the idea. Sergey and the rest of the crew believe that by playing CrossWorlds, Lea’s memory might be restored. They offer almost no support for this hypothesis. 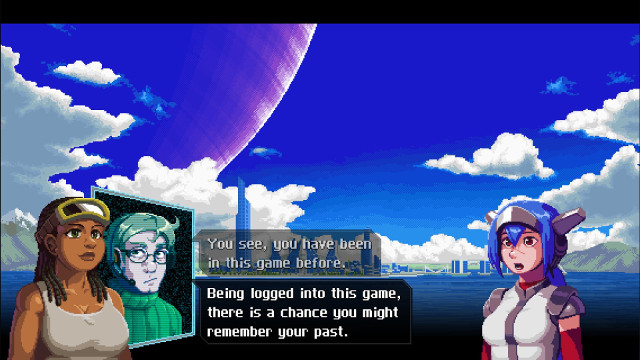 The ‘fuck it, we’re out of ideas’ approach to science.

It’s also not quite explained why I need to take a ship to get to the Playground instead of just logging as most people do, but fine, fine, it’s fine. One mystery at a time.

Immediate curiosity thus satisfied, Lea spends some time running around the ship. It’s difficult to get to know people when you can’t talk, but Sergey helpfully hard-codes one word into my speech module — ‘Hi’. This goes about as well as you’d expect. 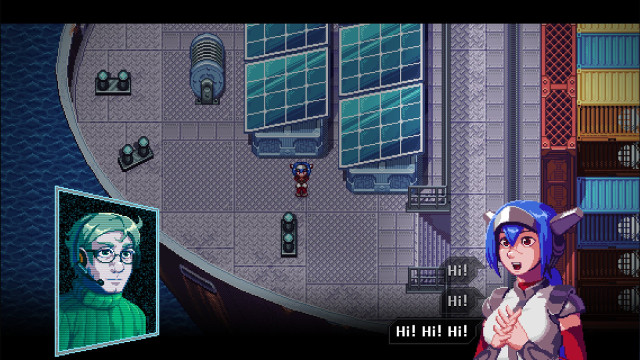 When all you have is a hammer…

Lea meets some people! Lea helps some crew clean up boxes, using her amazing ball-throwing skills! Lea gets a combat lesson from captain Jet! Lea is almost abducted by a mysterious blue figure, who flies in from the ocean and summons a giant monster crab! 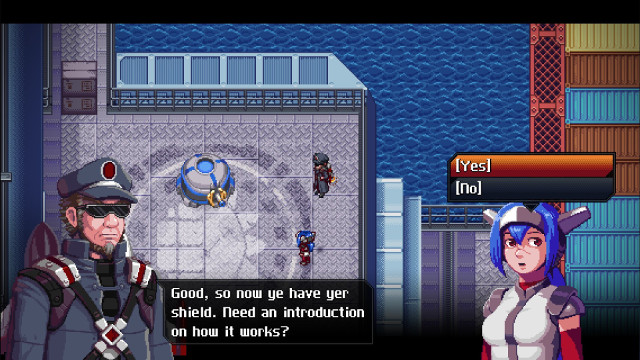 Lea learns how to use a shield! 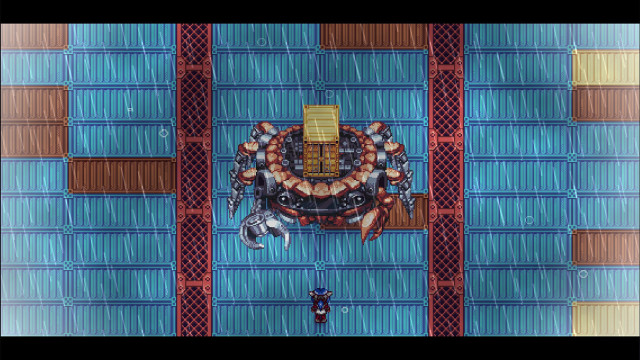 Go on, say the line. I know you want to.

I defeat the giant crab, but that doesn’t mollify the floating blue entity; they seem more determined than ever to abduct me. Captain Jet and his instant matter-disrupting bazooka provide respite, but whoever this character is, they’re strong. The ship is forced to take a strong countermeasure: Activate a pulse bomb that destroys all instant matter in a wide radius.

And since Lea is made of instant matter… 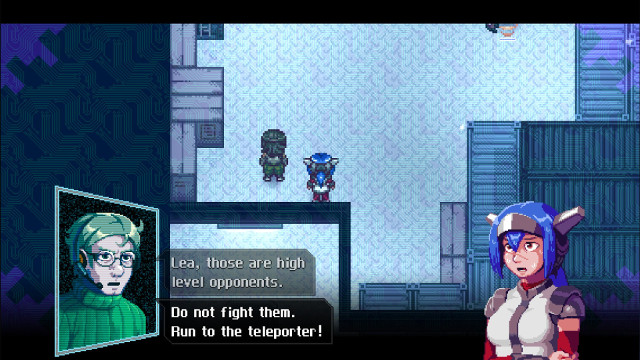 I’ll spare you the details, since we’re already two thousand words and thirty images in. All you need to know is this: When the dust clears and the blast subsides, Lea and I find ourselves in a giant open-air MMO arena. A full-immersion playground for the gamers of tomorrow. 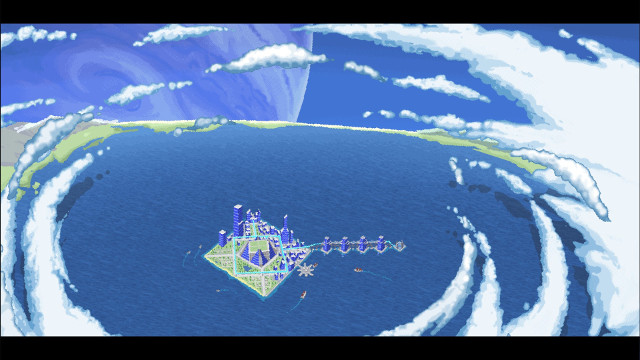 Oh yeah, it’s also on the moon of a distant planet, or something. Listen: This game has a lot going on. How about I check back in after I have a better handle, any kind of handle, on the CrossCode experience? Surely this game can’t stay this intentionally obtuse all the time.