So an interesting thing happened last weekend. I’d gotten my hands on Ben Esposito‘s Donut County, acquired off the strength of a bunch of people talking and sharing screenshots about it. Earmarked as a review game, I figured I’d play it a little to close out my Sunday night, and then plan how much I’d have to play more to get a good enough idea of it and where that would fit in my schedule. You know, the usual stuff.

And then I blinked and it was two hours later and I had completed the whole game. Even got a few of the secret achievements to boot.

I’ve thought about doing a full Donut County review, since obviously I liked it enough to play the whole dang thing in a single sitting. There’s just… not that much to talk about? A full analytic deep-dive would pretty much turn into me describing the whole game blow-by-blow, and I don’t want to inflict that on anyone. Least of all you.

I still want to give Donut County the added publicity it deserves, though. And if that’s not what the Indie Shortieland formula was ad-hoc-created for, I don’t know what is.

Donut County, Or: A Whole Bunch Of Mischief 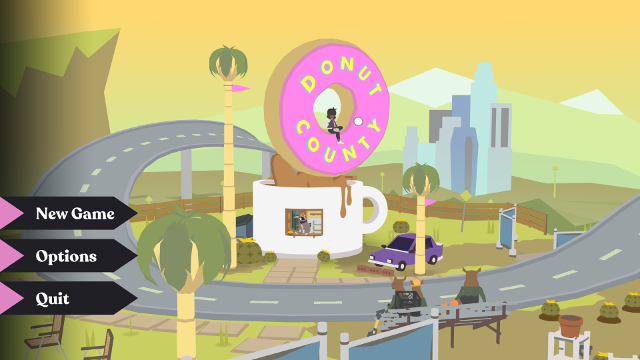 I fell in love with the art style pretty much immediately.

There are two ways I can talk about Donut County. Mechanically, ‘Donut County as a game’ is a Katamari Damacy-esque puzzle about moving around a landscape, absorbing objects into yourself and growing bigger and bigger. Except you’re a hole. 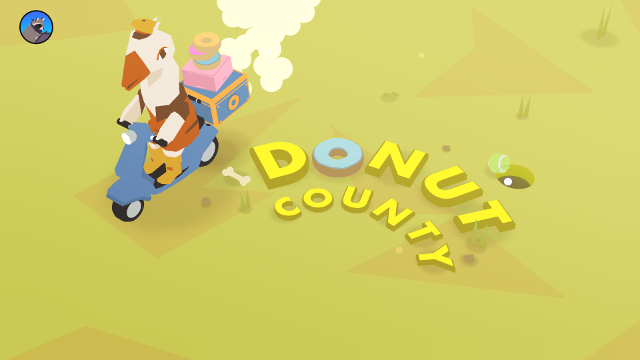 Your role in Donut County is that of a hole. Technically, you play a raccoon called BK who controls the hole (through means best summarily ignored), but practically you play a hole.

Donut County is comprised of a series of levels, and each level starts with your small hole opening somewhere in an almost Richard Scarry-esque tableau of items and objects and animal people. Like so: 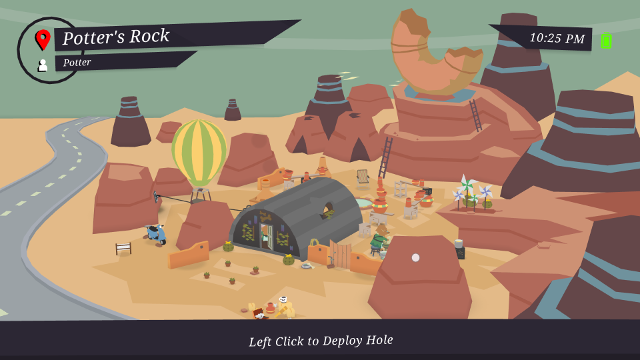 I don’t know if Richard Scarry is the *best* deep cut I could make here, but it keeps popping in my mind for some reason. 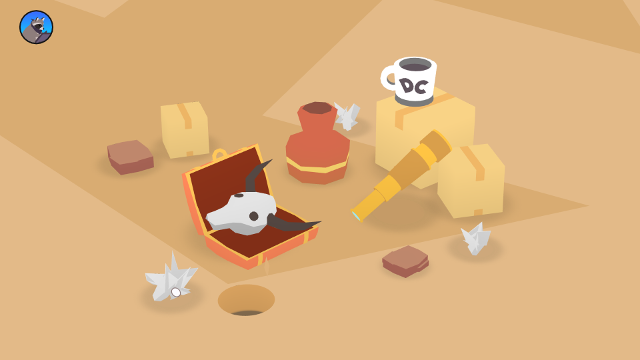 And if you do left-click, the hole appears — at a level-determined location, so don’t get any ideas.

You use your mouse or controller to move your hole around the section of the level you’re allowed to see. Your goal is (generally) to swallow everything in sight. Initially your hole is small, so you can only eat grasses and rocks and tennis balls and whatnot. But with every item (or person) swallowed, you grow a little bigger. So now you can swallow some more stuff. And grow bigger. And swallow more stuff. And so on, and so forth — you probably figured it’d work like this when I said ‘Katamari Damacy-esque’. Levels are divided into several sections, with you automatically moving to the next section once you’ve either swallowed everything you can, or in rarer cases, once you’ve solved a particular puzzle. 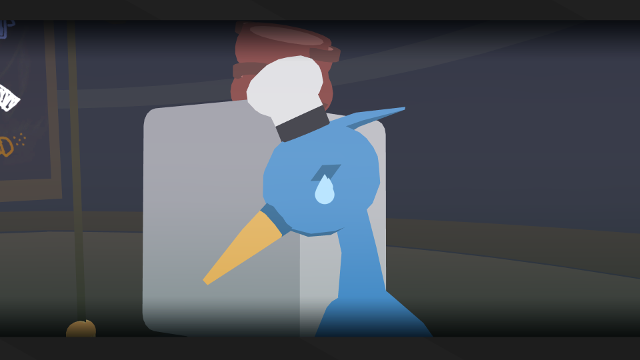 We will speak no more of this.

Complete all level sections and swallow all items, and you win the level. Complete all twenty-odd levels, and you win the game. The individual levels are fairly short, sweet, and to the point; none of them took me more than ten minutes to complete. They do get pretty clever and inventive with the whole ‘hole’ routine, so don’t think this is ‘just’ about comparing object circumferences. I won’t spoil anything here, but the later levels use and re-use particular mechanical conceits that elevate the gameplay and provide fun brain-teasers. The multi-layered last level in particular feels like a masterclass on everything you’ve learned so far, which is honestly one of the best achievements any puzzle game should hope for.

A significant part of Donut County‘s two-hour-and-change runtime instead comes from two narrative elements: The story, and the Trashopedia. The story is… The first half comes off as a cute little weird Rashomon-esque story about the series of events that lead to the town being in its current condition. Expect to see a lot of BK The Raccoon retroactively justifying his actions, is all I’m saying. 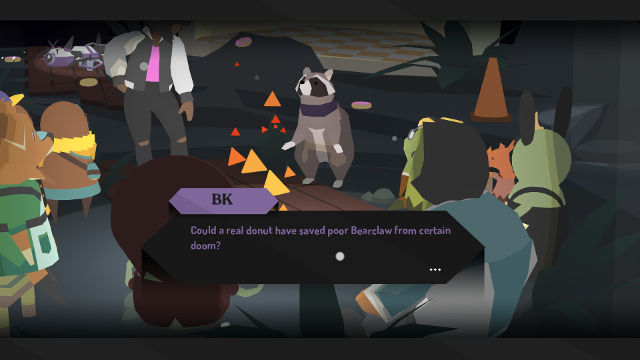 And a lot of references to ‘donuts’, whatever those are.

The second half, while still primarily ‘silly’, dips into slightly more serious storytelling. Don’t expect to have your world shook or your emotions shattered, but Donut County does ask some interesting questions about the nature of responsibility and shared guilt. When is it okay to close your eyes to the external effects of your actions, if those actions are important to you? How far do you go to get a friend to realize they’re on a wrong path? And to what degree does personal responsibility cross interpersonal or demographic lines? 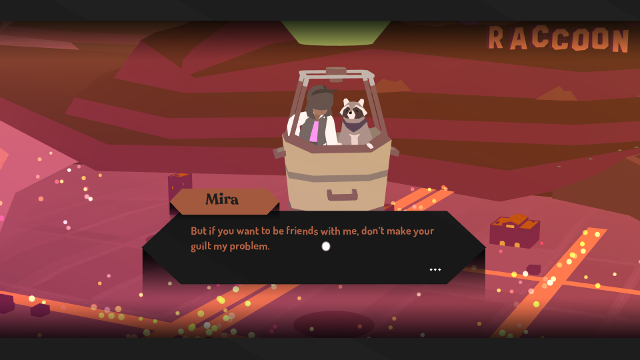 I’m probably making it sound more involved than it actually is, but there are a few really good lines. 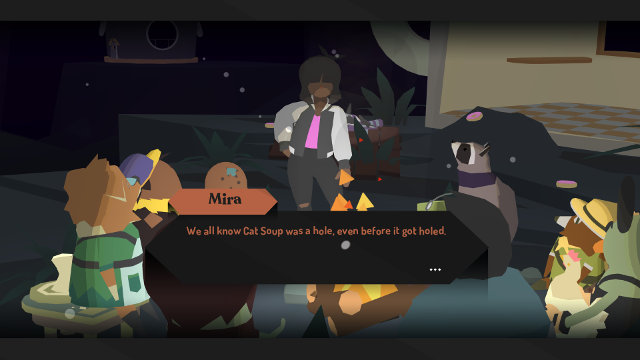 So let’s also reiterate that it’s a game where the common aim of writing is this level of great joke.

And then there’s the Trashopedia, which — if you’ve seen anyone post any Donut County content online, it’s probably either the ‘0415/bonkeyk0ng’ goof, or something from the Trashopedia. 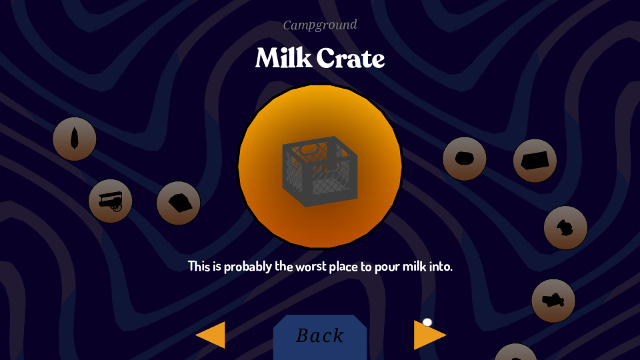 Ever wanted to see a raccoon give his opinion on every possible piece of trash? 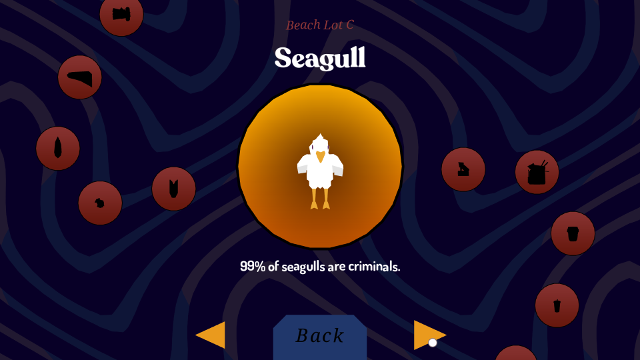 For variable interpretations of ‘trash’? 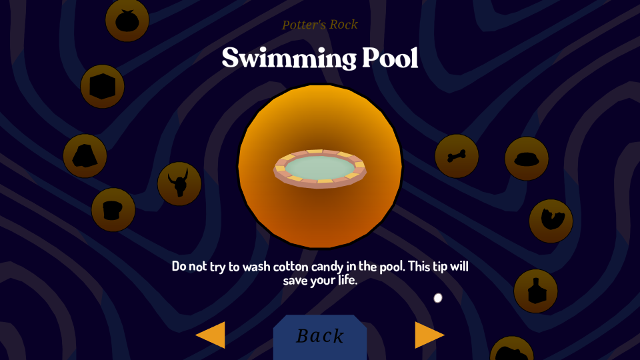 A good third of my Donut Country screenshots are just this.

And that really summarizes it, honestly! There’s more I could say about Donut County, like: The puzzles have an interesting physics nature to them, meaning it’s not just a matter of being big enough for all objects, but also making sure they fit. Framing the first half of the game as a gamified job is super clever, since it almost literally puts the player in BK’s shoes — despite knowing how it all works out, which works on a narrative level as well. The aesthetic is really good, nice and cool and calming. You occasionally chat with other characters in the game through a small Twitter-esque app, and the fact that you can send them honking emojis and they’ll send them back is the most Online Millennial thing any developer has ever managed to include in any game. Hollow Earth is real. And so on, and so forth.

But really, it all boils down to this: Donut County is cool and nice and fun, and if reading about it here made you at all interested, you don’t need to hear more specifics about the mechanics — you should probably just get it for yourself. It costs about thirteen bucks on a variety of platforms, takes a few hours to play, and leaves you with — well, hopefully not with a hole in your heart. Or else I might have been playing it wrong.

Jarenth had to focus like an eagle to write ‘hole’ instead of ‘whole’ every time. To celebrate his success, follow him on Twitter or hang out with him on Steam. And if you dig Indie Wonderland and Ninja Blues in general, why not consider supporting our Patreon campaign?