At this point in our long and storied history I’ve played about an hour and a half of Molecats. If you were to ask me for a gut-level description, it would be this: It’s an neat enough game with an interesting core puzzle conceit that does a lot of work over time to stay fresh… but also I never wanted to play it for more than fifteen minutes at a time. That doesn’t sound like it’s fun at all, is it? Also, it makes for difficult review writing when your core experience can be summarized as ‘eh’.

I had a realization, though: I’m not good for Molecats. That’s not to say I’m not good at Molecats, though that’s probably also not inaccurate. It’s just a game that does very little for me. It’s not bad, it just doesn’t really hit my buttons. Which, again, makes for tough review writing. In a professional context, I’d probably recuse myself from playing this and pass it off to someone else. But this is Indie Wonderland, the least professional possible environment, so instead I’ll try to describe Molecats as best I can and highlight why it didn’t work for me.. Maybe that’ll give you some useful insight into whether or not you will like it.

Like I said, the basic puzzle conceit of Molecats is okay. It’s simply this: Get one molecat to the exit. You do this by rotating tiles, using a small stable of action commands, and guiding your molecat(s) past or through an evolving set of obstacles. There’s more you can do, but the absolute minimum is always to get one cat through the door. There are at least fifty levels of this (I still haven’t counted), in a branching-linear structure with a small number of progress gates: I don’t think you can make a pure beeline to the last level, but you don’t need to do all levels to proceed either. 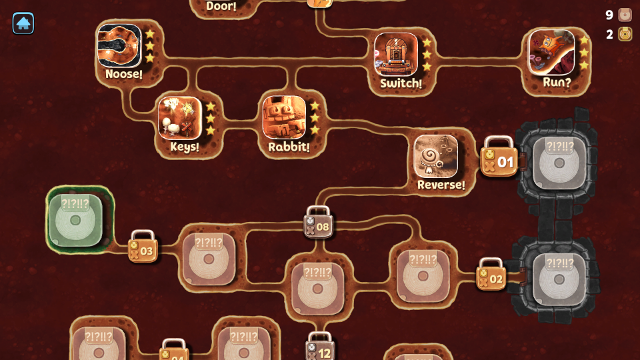 The grey doors are progress doors, indicating how many previous levels you need to beat to see their incomprehensible cutscenes. The gold doors are bonus levels, opened only if you collect enough gold tiles during play.

Even this basic puzzle structure has a lot of moving parts, obvious joke probably not intended. The core element is the tile rotating, as demonstrated on the previous page: Grab tiles by the corners and pull (or click the assorted buttons) to make new paths and swing your molecats around the level. It’s simple enough to grasp and master in smaller-scale environments, but then Molecats‘ levels have a tendency to get a lot bigger a lot quicker than you’d hope. And if your skill at spatial visualization and prediction is as good as mine, moment-to-moment gameplay will be a lot less ‘careful planning’ and a lot more ‘trial and error’. 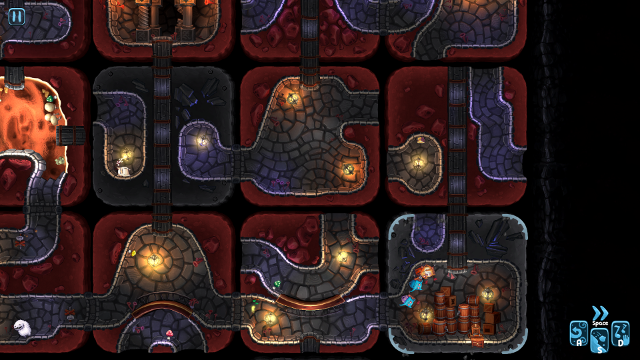 Molecats is actually pretty nice about its own difficulty. There are no timers, nor directly-timed elements, as far as I can tell. And you can always exit and reset a level. It’s possible to get horribly frustrated at your cavalcade of navigationally-challenged cat-beasts, but you’ll never get stuck.

But then again, it’s also pretty mean about it, given that it throws many many many tricks at you. Various types of patrolling enemies scare off your molecats — Orange can ignore some, but all the other ones run at the first sight of trouble. Flesh-eating plants trap your buddies. A selection of buttons and switches control a selection of gates and doors, have fun figuring out which is which. Often you’ll need several items to proceed, and every molecat can only carry one item at a time, so you’ll pretty much need to keep multiple molecats together. Which isn’t quite as fun as it sounds. There are holes in the fabric of time and space. Secret tunnels you weren’t watching out for. Later levels even include lever-rotated tiles, or tiles that flip back and forth in the third dimension, requiring you to keep track of two tunnel layouts per space. And I didn’t even get very far into the game! 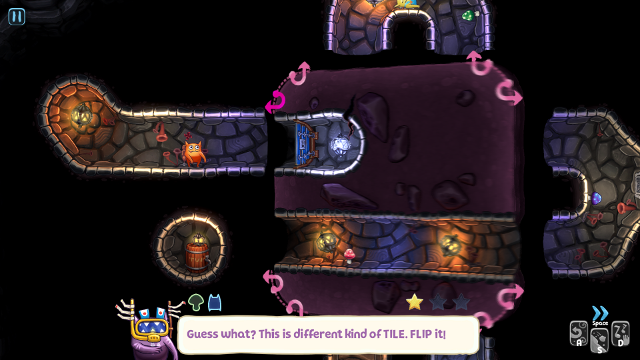 That said, ‘getting to the end’ was never the real problem in Molecats. It can be tricky, but it’s not the real challenge. The real challenge is doing well. As you’ve seen, Molecats grades your level performance on one to three gold stars, based on the number of possible molecats you got to the exit (so you’ll want to find and rescue all of them per level), the number of doodads you collect (so you’ll want to lug those around), and the number of mushrooms you pick up. Those tiny, widespread, easy-to-see but easy-to-miss mushrooms that grow all over every level. 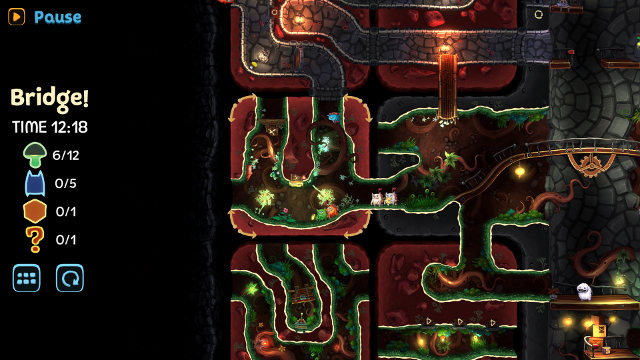 There are so many mushrooms, you guys.

Getting to the exit means understanding the level layout. Getting three stars means going everywhere, every corner and every (molecat) twist. It means working out the relations between all buttons and switches and all doors, and working out how to navigate your molecats such that they walk upside down here, and then go through that gate, at which point you press this button while avoiding that enemy… It means keeping an eye out for suspicious blank spots on the larger map, because you’ll learn to know there’s a secret there. You just have to work out how to get there. Link up a path? You’ll see it if that works. Throw a secret switch first? Fall through the space-time cracks you’ve been taught to avoid? 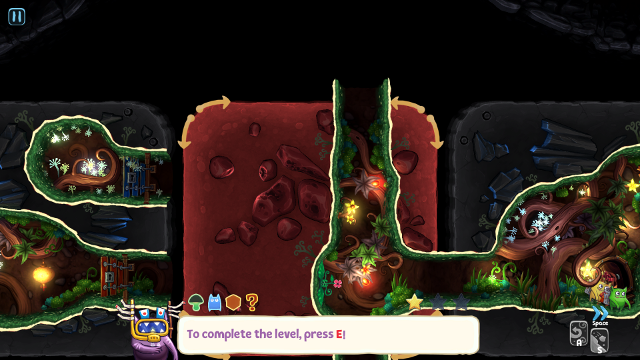 Huh. How weird, that that path continues on in the dark distance instead of ending. That probably doesn’t mean anything, right?

Getting all of that stuff, hunting for the secrets and the hard-to-get doodads, is what elevates Molecats beyond its historical counterpart. Getting the golden seals has the additional bonus of unlocking the golden-seal levels, and the boxes you find contain trophies which slowly unlock the ability to dress up your molecats in silly outfits. Getting three stars in each level is only a goal for its own sake, if you care about that sort of thing. 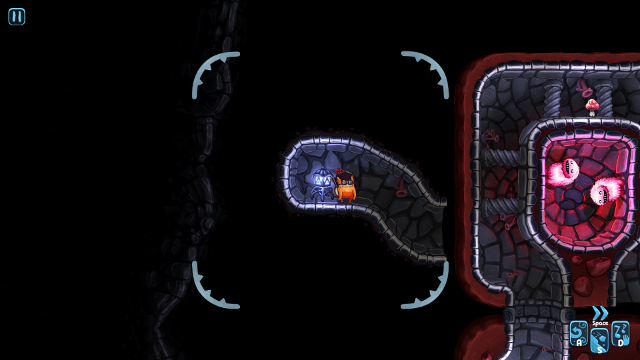 On the upside, this is pretty funny. On the downside, you need specific sets of four trophies, without any idea where any of those trophies are hidden.

Getting all of that stuff is also very tiring — and here we get to why I personally am not a good fit for Molecats. It just exhausts me. Even shorter levels task you with keeping track of and mentally manipulating a lot of variable information. I wasn’t kidding when I said I just trial-and-error most of it. Which is something you can do, especially after you get the pausing power; before that, there’s no way of manipulating the level without having your molecats move. And I’m very grateful to Molecats for not having ‘level completion time’ as a star rating determinant (though it does track it as a regular metric). Similarly, I appreciate that getting a cat to the door doesn’t immediately end the level, and that you can always opt to have your cats quake-run past it even when the end-of-level prompt has already appeared.

Still, there’s a lot to take in. And that’s in the smaller levels! In the larger levels, I dang near started having panic responses. The game just starts when you enter a level, so there’s this immediate sense of having to go for it. So despite Molecats being approachable and pause- and replay-friendly, it just sets off alarm bells in my mind. 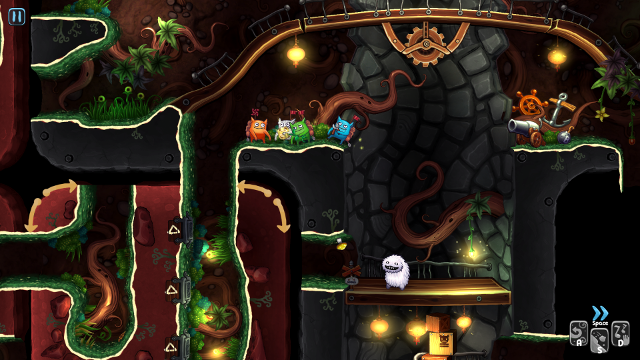 This is the last level I made it to.

The stress level does drop over time as I get to ‘know’ a level. Many larger levels have an interesting internal arc that moves from ‘incomprehensible doom maze’ to ‘some sort of semi-comprehensible doom maze’. Especially ‘clearing’ certain tiles of mushrooms and treasures and knowing I won’t have to come back there feels very good. As long as that works, anyway. I’ve quit out of several levels because I just couldn’t get the overview, I couldn’t deal, only to come back later when my subconscious mind picked the puzzle apart a little better.

And maybe that’s the kind of game that Molecats is: Something to play in short bursts, one or two levels at a time, throwing your mind at an unconventional problem. That’s probably how I would recommend it, if I were to recommend it. And honestly, I kinda do: Molecats is clever and neat and colourful and challenging. It’s also just mentally draining, at least for me.

It’s also not quite perfect. For one, selecting particular tiles to activate your special powers can be a little wonky, ,and it’s never very clear what parts of the background count as being on or off a particular tile — I’ve accidentally turned around half my column, or stopped all but one cat, more times than I care to admit. And the moving enemies are more annoying to deal with than they scary or intimidating opponents in any sense. Since they move around all the time (albeit in limited ways), they can be hard to predict. Some only move between clearly-marked spots, but others can move around willy-nilly, including following your rotated tunnels. Sometimes the game even uses this for cool puzzle purposes, which is equal parts very interesting and terribly frustrating. 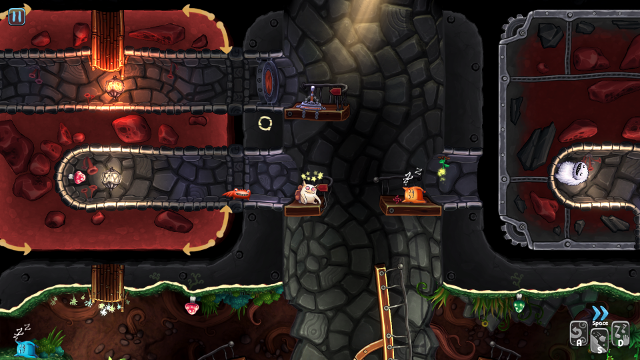 It’s usually more ‘interesting’ at the start, and then more ‘frustrating’ as you keep having to deal with the enemies.

It’s very clever! This theme reverberates through the level and puzzle designs: Molecats is a very clever game that understands what it’s doing and the experience it is aiming to provide. And I’m genuinely curious to see what sorts of ideas it carries into later levels.

I just don’t think I’ll ever actually get there.

Let’s recap my personal barriers here. Molecats doesn’t really work for me for two reasons: The aforementioned mental energy drain, especially in larger levels, and my psychological need to get all the optional doodads. That’s just a quirk of mine: I’m terrible at ignoring the ‘optional’, especially when a grade is attached. Ask me how far I got into Bayonetta. But while Molecats is all about providing that kind of intense graded challenge, it’d be remiss of me to not mention that it’s also kind of slow and monotonous at times, especially when all you have left to do is ‘collect the final level tidbit’. You can speed things up, but not that much. And of course, if you can’t figure out how to get to that tidbit…

Maybe all of this sounds super good to you! Maybe you’ve been looking for a fairly meaty spatial puzzler about cats that are also moles, something that grades you on systems understanding and spatial awareness and doesn’t penalize you for taking your time. Something that you can play in bursts, maybe during lunch breaks or commutes — it does seem well-optimized for mobile devices. If that’s the sort of thing you’ve been looking for, Molecats sounds like a pretty decent thirteen dollar investment, especially for the amount of levels it seems to offer.

Not that I know how many there actually are.

Jarenth prefers moles that are also cats over cats that are also moles. Discuss the topic on Twitter or hang out with him on Steam. And if you dig Indie Wonderland and Ninja Blues in general, why not consider supporting our Patreon campaign?