Well, this is certainly. This is an opening, I’ll tell you that much.

In part because I have nothing else to say about it.

Molecats has an average offering in the options department. Language, resolution, sound sliders some advanced graphics, rebindeable keys… all four of them. There’s also a Trophy cabinet, which impressively is not just a link to a Steam Achievements page but an actual collection of collectible trophies. Collecting ‘boxes’ will ‘unlock special outfits’, whatever the hell that means. 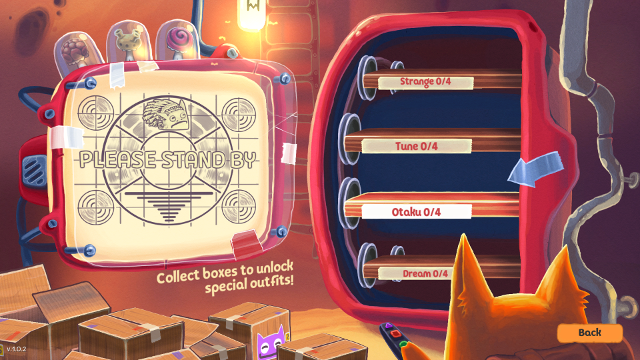 Something to look forward to, I guess. 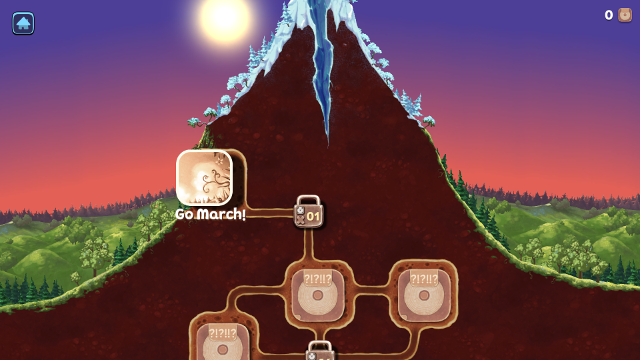 Just like, immediately. No introduction or anything to speak of. 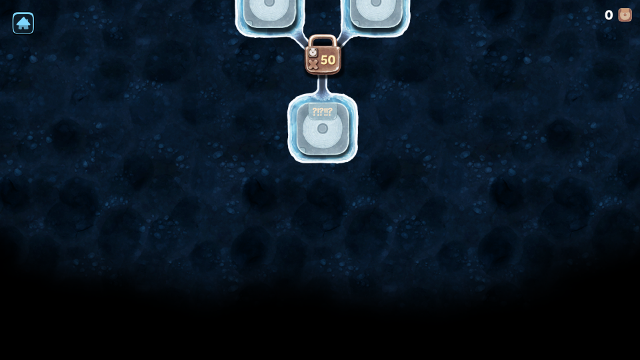 But right now, only one is open. I double-click it, and one loading screen later I am deposited straight into the action. 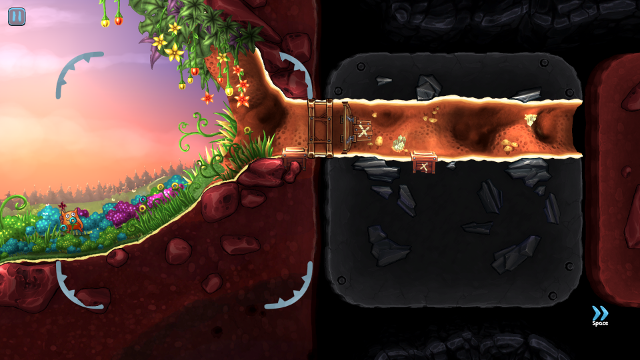 Setting: The side of the aforementioned mountain.

Alright, what am I looking at? To the left, half-hidden in the tall grass, stands a bipedal orange cat. Or walks a bipedal orange cat: They immediately start sauntering rightward, towards a cave entrance. Which appears to be closed off by way of wooden door. Am I about to witness a practical physics tutorial?…

Aha! The orange cat walks over a button on the ground, which opens up the door. They then walk forward further, hitting another button, which closes the door again. At the same time, the horrendous-stereotype-looking masked purple cat from the title screen pops up in the bottom the screen, yelling about how they’re Bowie and they’re here to help Orange and me. So close after locking ourselves into this cave, I can’t help perceiving this as some kind of threat. 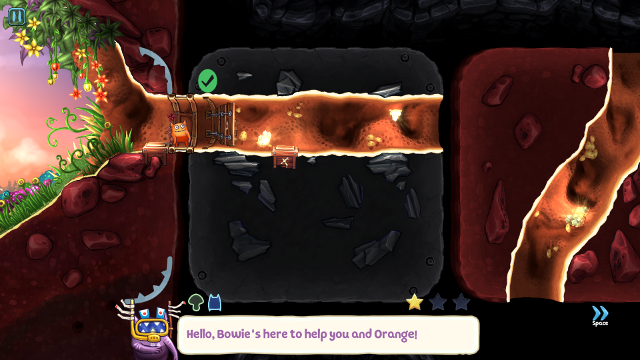 Okay, they technically appear right as we enter the cave. But I don’t know if I could have stopped Orange if I wanted to.

Actually, what kind of control do I have? I can’t steer Orange directly. Bowie provides helpful advice: The entire world (under the mountain) is made of TILES. Some of those tiles are GREY, which means I can’t do anything with them. But other tiles are BROWN, which means I can grab them by the corners and rotate them. 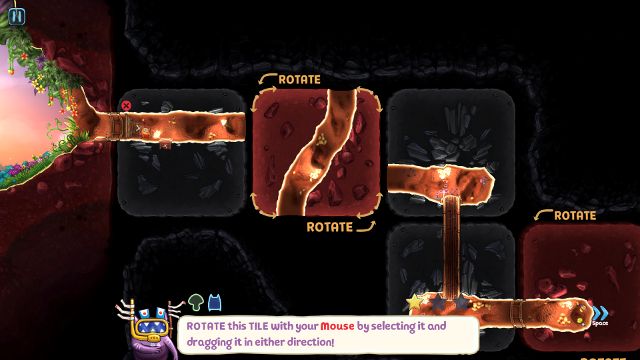 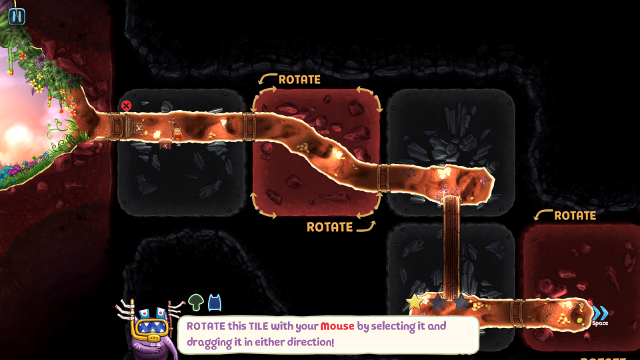 What a novel and unexpected control mechanic! This definitely wasn’t the sole thing I remember from Molecat Twist, nor was it heavily emphasized in Molecats‘ promotional materials!

A new tunnel now in place, Orange walks forward and through the rotated brown tile. In the grey tile that follows, they jump into a long vertical shaft without hesitation. 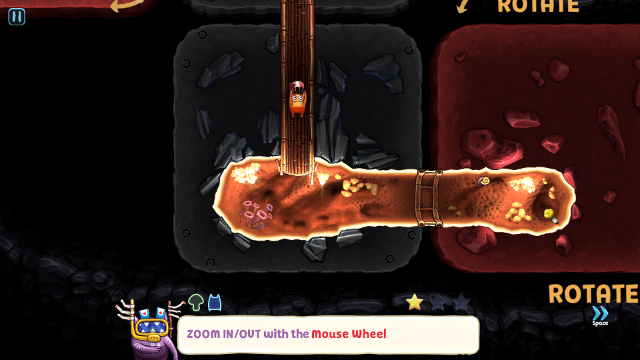 A smile on their face and NO REGRETS

The brown tile beyond the drop is a little stranger, as it doesn’t have any sort of path — just one dead-end cave. But here Molecats‘ does some clever work to pre-emptively break off misapprehensions. See, it’s easy to just assume you can only rotate brown tiles that Orange isn’t actually in; you wouldn’t bat an eye if I told you that that’s how things worked, would you? 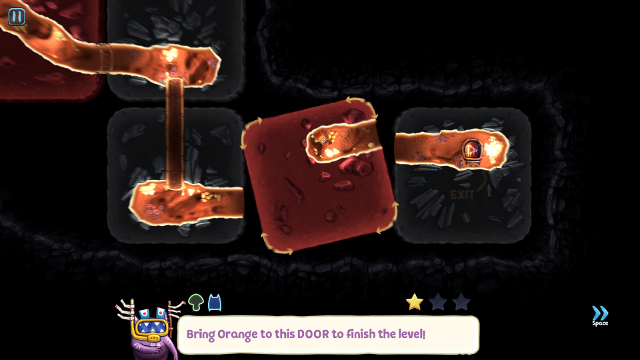 It turns out things don’t work out that way at all!

Orange is upside-down now and they don’t even care. They just keep walking on the ceiling, down the wall incline and onto the floor, and then all the way to a door at the end of the hall. Surprisingly, that door is the end of the level. 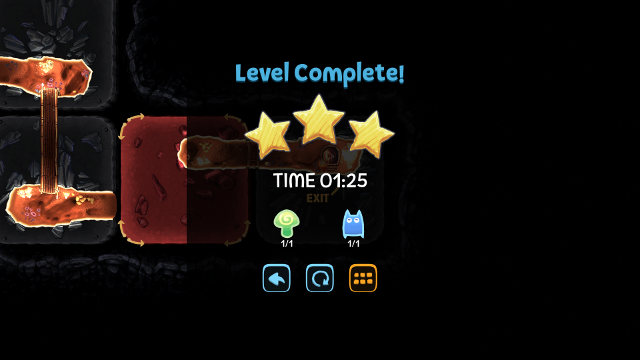 Three stars for reaching the end!

Beyond the first level, the path to the second level is blocked by… some sort of grey lock. It requires one grumpy eyeball to open, and as luck would have it, I have exactly one grumpy eyeball! I’m going to choose to suspect that this symbol means ‘levels completed’ and move on.

Unlocking the level path also unveils a cutscene! Of sorts. It’s… That is to say, the cutscene is… it shows… 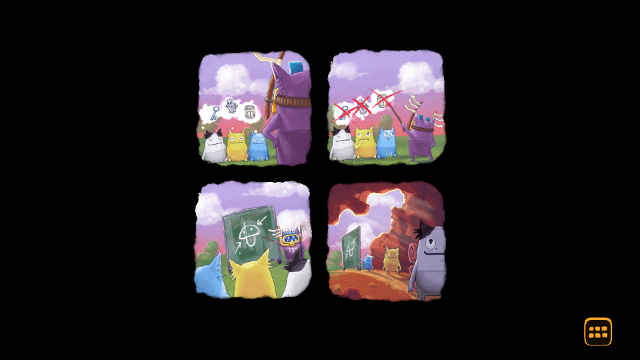 Listen, I legitimately don’t understand what I’m looking at.

The second level plays with the tile twisting mechanic a little more, and also introduces a different kind of twist: A mushroom, as shown in the cutscene! Bowie suggests that I’ll want to collect all mushrooms. Can you see where they are? 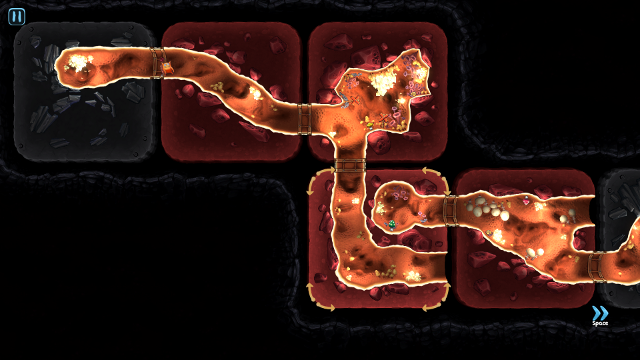 Ah, but why would I actually want to collect all mushrooms, you ask? 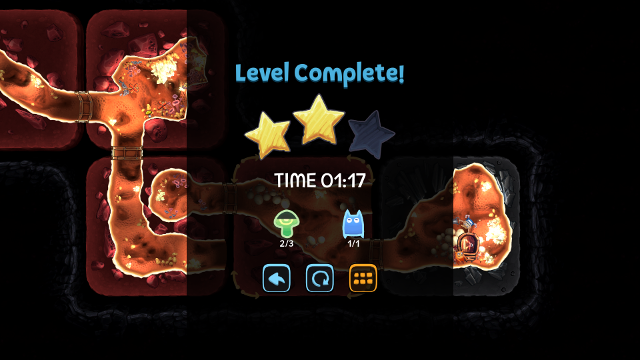 I suddenly and sharply realize how dangerous this game may end up being for me.

The third level twists the formula again: By eating a special Quakeshroom, I gain the special power of EARTHQUAKES. Which is to say, I-the-player gain that power, even though Orange was the one who ate the… listen, it doesn’t matter. What matters is that I can now select any tile and press and hold S to cause an earthquake. If I do this to a tile Orange is in, they start running in panic, and will keep running as long as I keep the button pressed. While running, they ignore any terrain element that requires them to interact: Levers, pits, doors… not buttons, though, since those will get pressed whether or not your mind’s on the case. 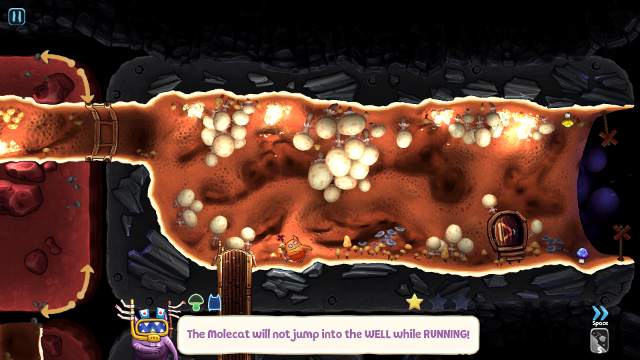 Again, I have to give Molecats credit for pretty good tutorial design. This level is literally unbeatable unless you understand the earthquake powerup, and yet by design encourages the player to organically discover how that works. 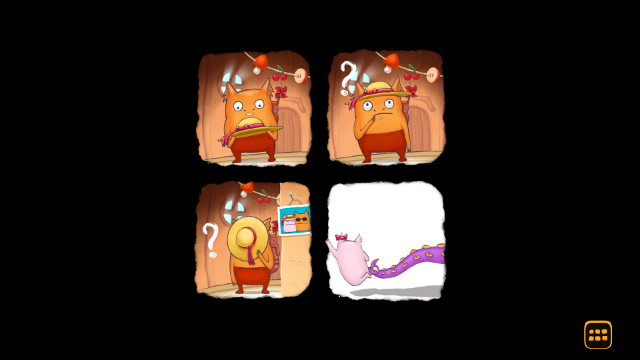 Seriously, I don’t have even the slightest idea of what’s supposed to be happening here. Even less so than the previous one. 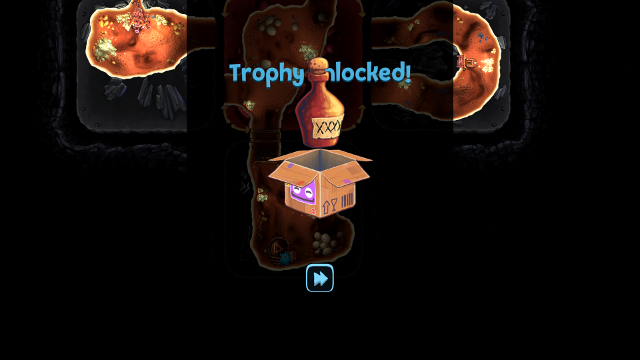 I think I might need some of this trophy.

Before I know it, I’m nine levels in and on the cusp of starting my first ‘golden key’ bonus level. Except I did also take several lengthy pauses between levels; this game gets a little tiring on the brain. But I’m having a decent-enough time with it so far! We’ll see if it manages to translate this New Game Energy of learning about interesting mechanics every other level into a form that overcomes me turning it off every other level to take a mental break. Because that doesn’t sound like it’d be fun at all, would it?