Mothergunship. The word is evocative. What is it? Is it a mothership that’s also a gunship? That seems like the obvious choice, but what if it isn’t? What if it’s a mothership in the shape of a gun? Or a gunship that holds smaller gunships inside itself, like a sort of mother-gunship? Or maybe it’s a… I can’t think of a joke for ‘mothergun’. Or rather, I can, but I don’t want to tell it and you don’t want to read it.

At any rate, Mothergunship is also a new shooty bang game by Terrible Posture Games and Grip Digital. Maybe… maybe the only way to find out what a ‘mothergunship’ is is to play that game? Wouldn’t that be a strange world we lived in?

Hey, fun factoid: Did you know that the name of the Mothergunship executable file is ‘TowerOfGuns2.exe’? You can learn some magical things by using Fraps to encode images. 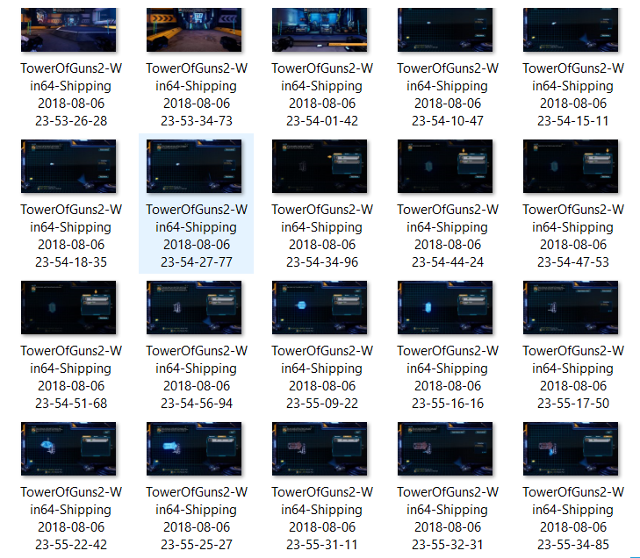 See, because Fraps auto-names images for the executable it detects running at the time of capture.

At any rate, the title screen wastes very little time making me anxious. 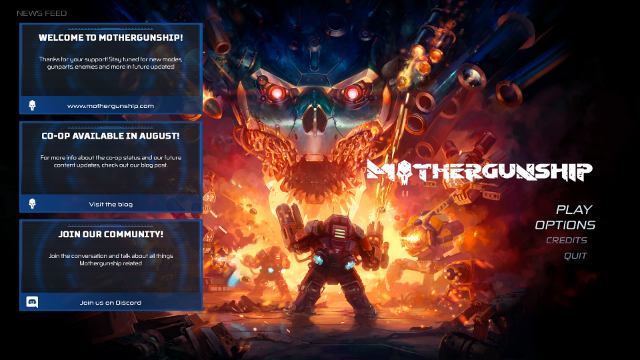 Because of how busy it is, not because of the giant skull. God, there’s just… so much *going on* here. Where do I start?

I root around in the options for a little bit, trying to grab onto any sense of normalcy. It doesn’t super work, as the title screen blur-bleeds through in the background anyway. On the other hand, I do really appreciate the framing this effect achieves. 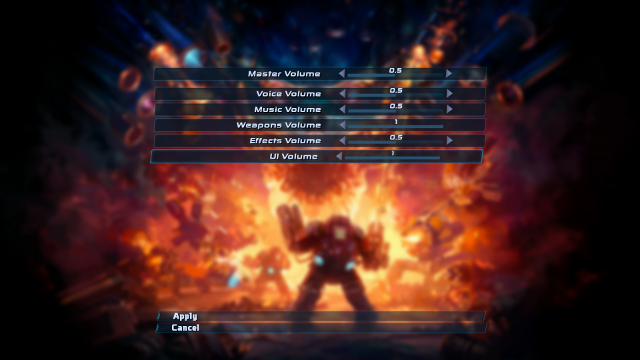 Oh, and the options are alright. Nothing to write home about, no major exclusions or spectacular innovations.

No, there’s only one way I get out of this blue-and-orange up-tempo stress zone, and that’s straight into the belly of the beast. It’s time for me to crash… the Mothergunship!

I think. I’m still not actually sure what that word means. 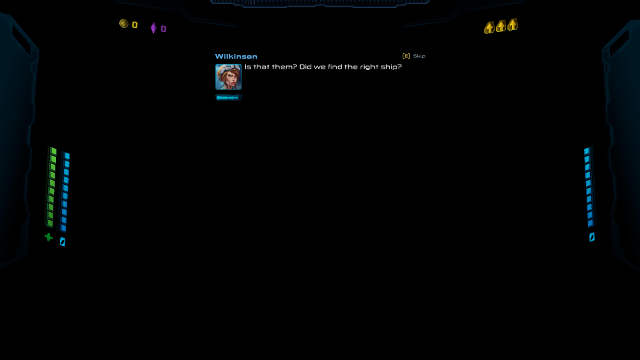 “Is that them? Did we find the right ship?” a woman by the name of Wilkinson voice-acts. “It’s someone, Wilkinson,” replies the Colonel, with a smooth mild-baritone voice that makes me believe everything will be alright. “That’s good enough for me. They’ll do. Give them the armor.”

Then reality fades into view. 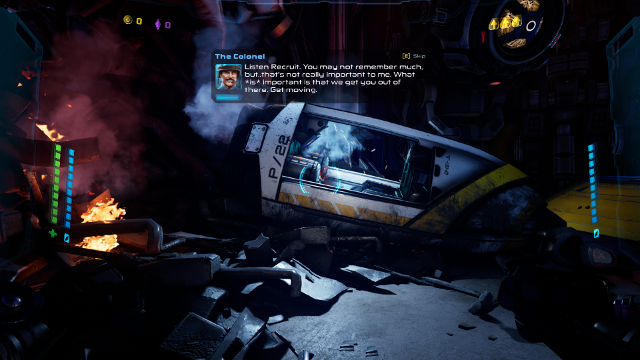 Everything is very much not alright.

Mothergunship adheres to the in medias res style of tutorial, as well as the ‘we hope you already know how this works’ style of tutorial. Case in point: The first and so far only thing the Colonel tells me is that I have triple-jump boots, and that I should get out of here. And when I turn around to find the only exit out of the room, I find a series of signs — a single jump pictogram on the first barrier, a double jump one on the second, and a triple jump one on the third. This is pretty interesting, and good visual design!

Slightly less good is the fact that I was never told to use WASD to walk and mouse movements to look around. ‘You know that stuff already, right?’ 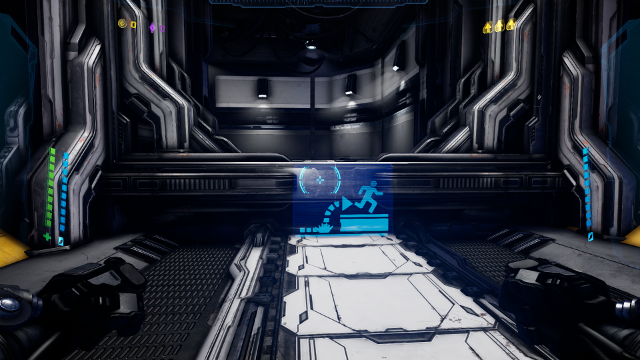 In other words, Mothergunship teaches at a level appropriate for novices — but not absolute beginners, who will be left staring at their crashed space pod.

I walk through some empty hallways in various stages of deconstruction. One of them has some fires. One of them has a cool view of the outside, which is space! And the Earth, which looks to be only a little bit on fire itself.

Then I find a door. It opens as I approach, and closes as I pass, leaving me in a small space with another door. Except this one has a number on it. And there’s a sign off the side marking all sorts of stats: How many enemies I’ve killed, how many shots I’ve fired, how many times I’ve… jumped? Why is that a stat to track? 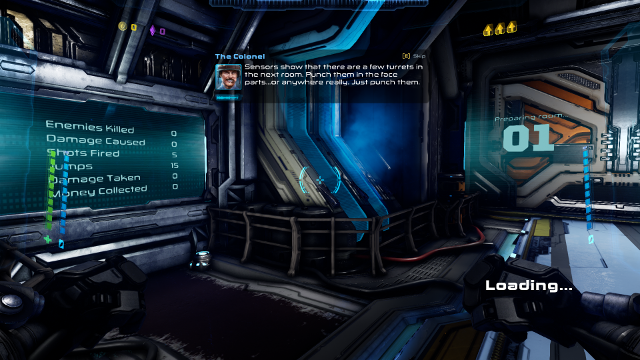 The shots counter is at 5 because I tried left and right mouse clicking a few times, both of which resolves to ‘punching’. I don’t know why that counts as a shot, but there you go, I guess.

The door to the next room opens, and I enter. Several turrets materialize out of nowhere! 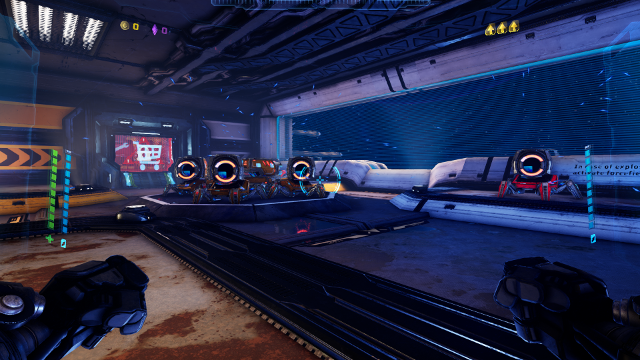 The turrets start shooting slow, oversized Bullet Bill-looking projectiles at me. So, taking the Colonel’s advice, I avoid the bullets, get up close, and punch the turrets to pieces with my apparently pneumatic robo-fists. 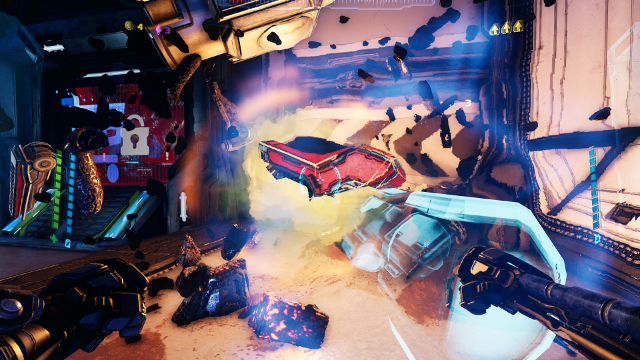 The broken turrets drop small purple diamonds and large yellow circles, both of which I hoover up. Unfortunately, I do take a few licks in the process — turns out it’s really difficult to keep track of a dozen enemies shooting at you from all directions. Colonel suggests that while my armor can hold for a while, I should probably try getting a gun somewhere.

Luckily there’s a shop just nearby! 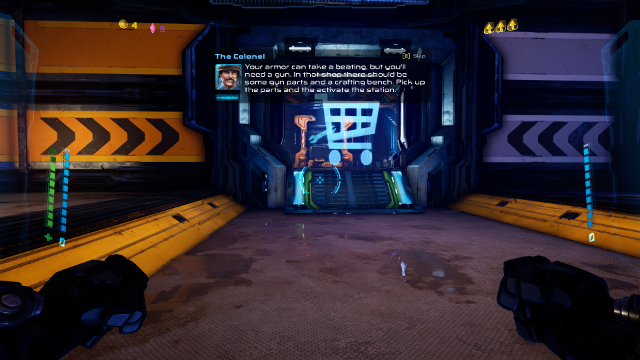 I’m not told why there is any kind of shop on this spaceship. Or why it was guarded by turrets. Or why I would be able to use it. 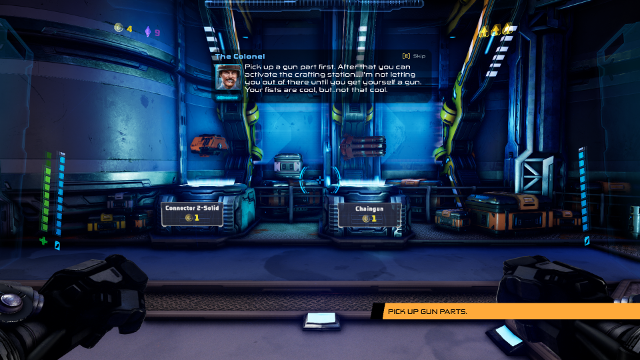 At the end of the store I find a convenient crafting bench, where I can combine my aforementioned parts. The two ‘connector’ parts are just that, connectors: I add them to a small starting point in order to open up more slots. Those slots might be pointing anywhere: Up, down, left, right, forward, backward. The chaingun part is a ‘barrel’, i.e. an actual gun: I can add it to any forward-facing slot to add gun functionality to the gun I’m supposed to be crafting. Finally, the ricochet mod is a ‘cap’, a special item I can add anywhere in order to give my gun special powers.

Here, a more visual explanation: Let’s say I start with my 2-Oval. 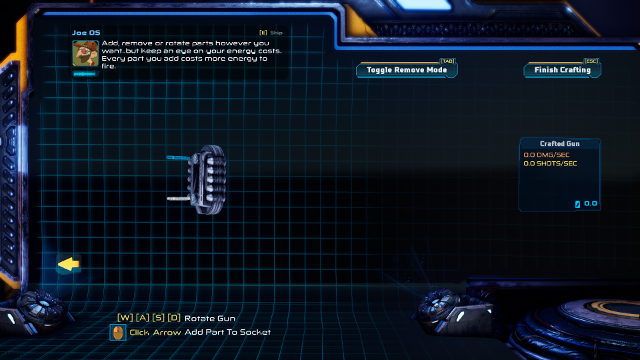 I can rotate it in 90-degree intervals with the right mouse, or place it by double-clicking left.

Using only this part, the scientific name for the contraption I just made is ‘nothing’. But if I select one of the two forward-facing sockets, I can add my chaingun barrel. Now I actually have a gun! 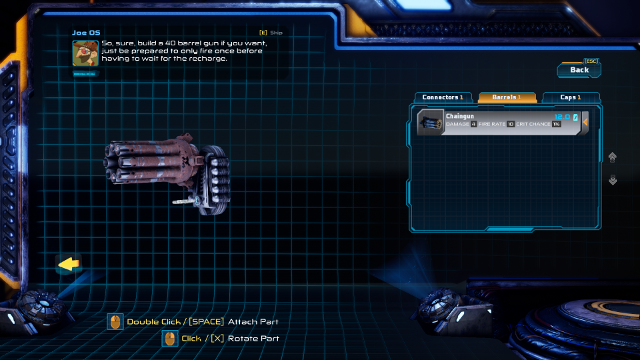 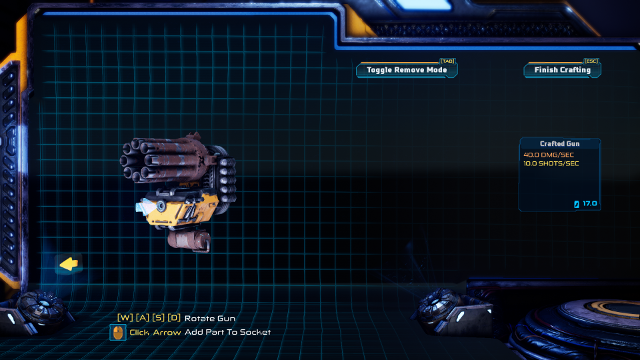 Hypothetically, I could do this.

And just like that, my right arm is a gun.

Which is good too, because the very next room I enter spawns a whole bunch of enemies: A giant rocket turret, and a pack of small angry robot dogs. I would have hated to have to punch all those to death! I mean, I can still punch them: My left arm is still Situation: Melee Only. But having bullets handy certainly improves the whole experience. 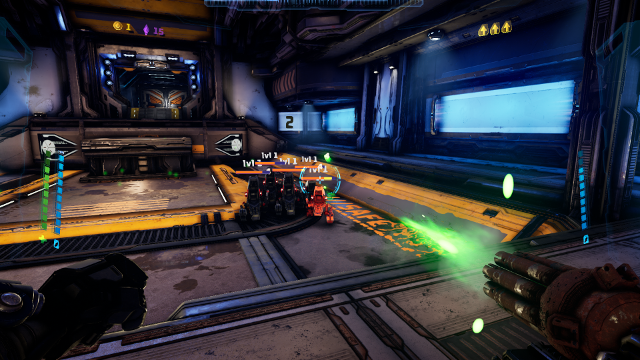 Hah! Can you imagine being melee-only? What a bunch of doofuses. 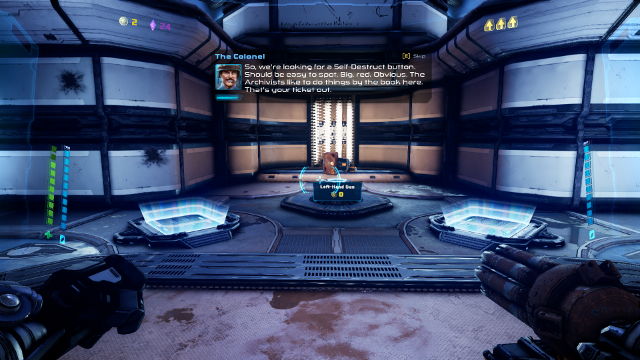 And hey, look what I find at the end of *that* room!

I fight my way through several more rooms, each throwing increasing numbers of enemies at me. This results in increasing amounts of money for me. And hey, two rooms later, another shop shows up! I have significantly more leeway in what to buy here, but still buy most of the stuff I can get my hands on. Like this rocket launcher barrel!

Now, I know what you’re thinking: Surely Mothergunship wouldn’t let me add a ‘rocket launcher’ to a gun that’s already very clearly a ‘chaingun’? That just doesn’t sound like it makes any sort of logical sense. 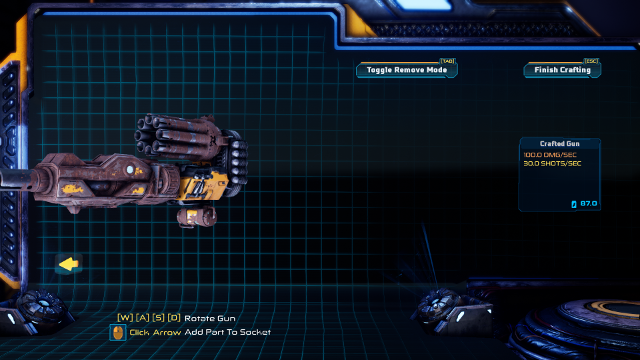 It turns out that rules are fake and expectations exist to be shattered. 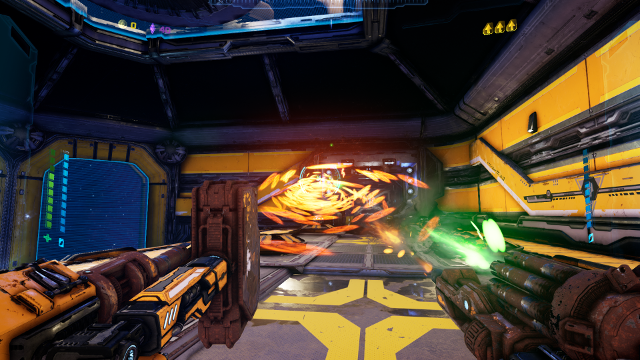 With the power of four simultaneous barrels, no turret or robot dog can stand before me. I sweep through one room, then another, then another. Nothing challenges me. I am like unto a god. 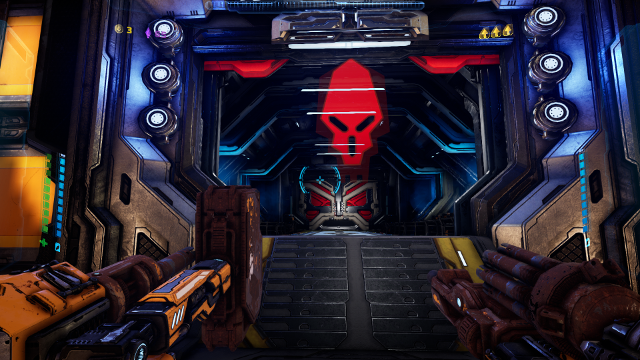 Then this door shows up.

You know how they say pride goeth before the fall? 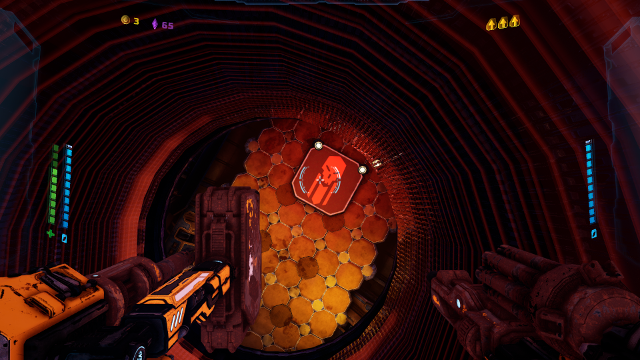 Applied rather literally, in this case. 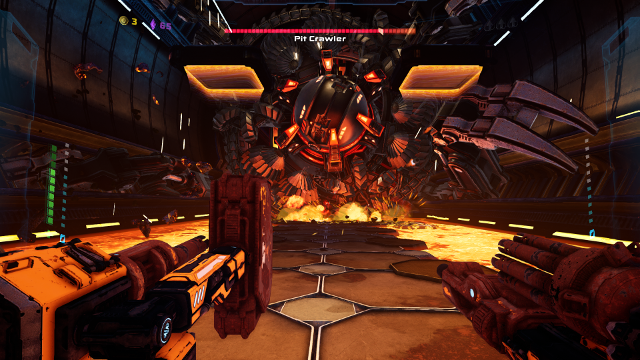 What follows is a hectic few minutes of running, gunning, jumping, more jumping, and avoiding lava. The pit crawler only occasionally opens its weak spot, to fire an enormous laser beam. But when it does, it cracks open a door behind us, then starts slowly moving forward — forcing me to run and platform for my life. And that’s not even mentioning the dozen other robots and turrets that seem to show up out of nowhere. To call it madness is putting it kindly.

Upside: I never run out of ammo, since these guns don’t do ‘running out’: Ammo is displayed in the blue bars on the side, and slowly regenerates over time. Downside: I do eventually run out of health and die. Except I don’t, because this is a ‘supposed-to-win’ fight, so the Colonel’s inspiring voice magicks me back to life. 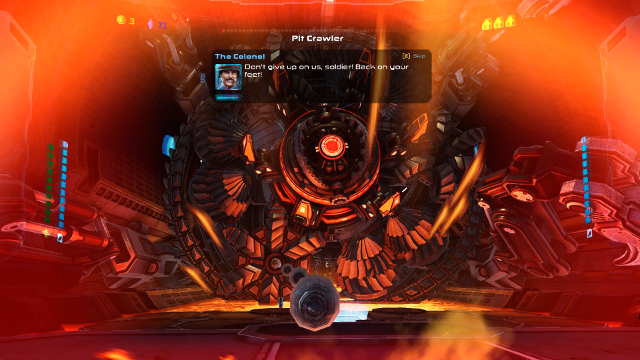 ‘Sorry, you lost! Do the tutorial over, you dingus.’

With the Colonel’s magic help I eventually destroy the giant boss, and cross through a green door with a victory flag on it. The last step is to find the ship’s self-destruct button, press it, and bail. 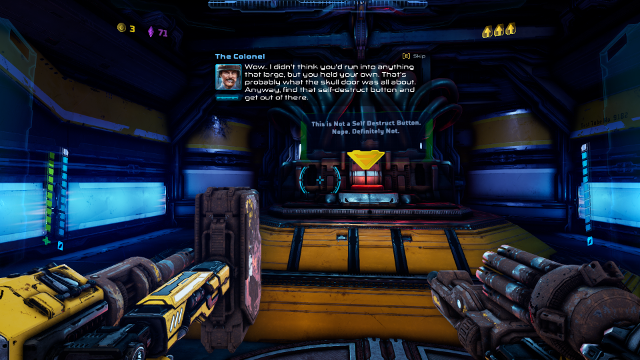 I climb into the conveniently-located escape pod, and for my efforts am treated to a short cutscene of me jetting out of the ship as it explodes. Then I get to see Earth again, more up-close this time. She looks good. Though there is an armada of alien vessels hanging around, that seems less than optional.

The Colonel explains: Earth is under attack. Each of the ships I see before me is an alien ship like the one I just destroyed slash escaped from, and each of them will have to be tackled the way this one was: By sending in a lone soldier to infiltrate, craft their own weapons, and destroy them from the inside out. It’ll be long and grueling, but it’s the only way to finally get to the Resistance’s ultimate, war-ending objective… 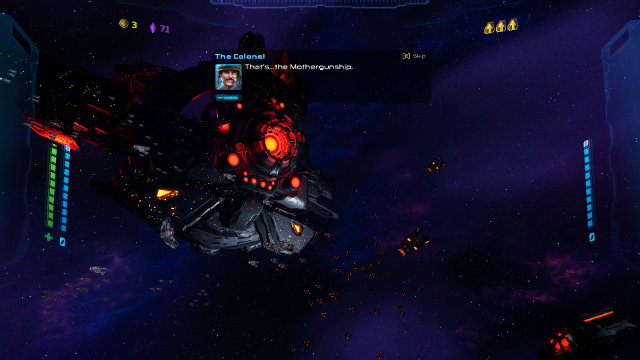 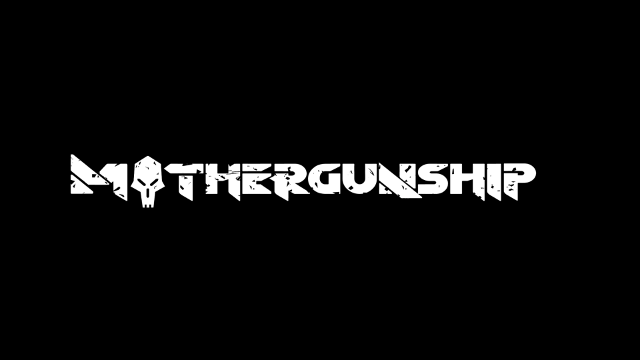 Followed by an actual title drop.

I won’t lie: I’m actually pretty psyched at this point. A one-man war against an autonomous alien armada? Using nothing but my wits, my reflexes, and an endless array of interlocking weapon parts to take down the ultimate threat to Earth itself? Hell yeah, sign me up. I’m ready to take the fight to the Mothergunship!

Maybe, on the next page… I’ll have already destroyed it?