Having a memory as bad as mine comes with a lot of downsides. I require external measures and software to keep track of birthdays up to and including those of my immediate family; I’ve developed a habit of patting down my pockets ‘to check I still have everything’ as a security measure; I really need to get my jackets dry-cleaned soon; I genuinely can’t remember if I’ve done this bit for an intro before or not. It is, all in all, not an experience I would recommend.

The one upside of excessive forgetfulness, though, is that it’s really relatively easy to be surprised. For instance, take Hollow Tree Games‘ Shape of the World. I backed this game on Kickstarter back in 2015, and subsequently between then and last week proceeded to forget every single detail about this game and why I chose to support it, up to and including forgetting that it even existed in the first place. No, really. You might think that should be impossible, especially given that Kickstarter update emails are still a thing. But, what can I say? I take my absentmindedness seriously. And 2015 is at this point several decades ago.

You’ll notice from the title that this Indie Wonderland is of the shorter variety again. I’d intended to play Shape of the World sight-unseen this week, but part of what I forgot is that it’s the sort of game that doesn’t gel with the full Indie Wonderland formula well. For reasons of critical accuracy, this time, not for reasons of experience-spoiling. How do you write a full review about a game that can accurately be summed up in four sentences?

“You walk around mysterious trichromatic worlds. Strange plants and animals bloom into existence around you. Triangle gates suggest your path, change your colours, and unfold floating staircases and pathways. Eventually, you’ll move on.” 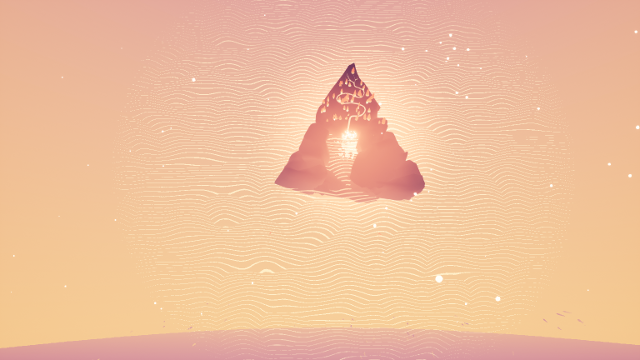 Shape of the World is a game of the genre that I keep trying to get caught on as ‘Narrative Exploration Adventure’, but that most of you will think of as ‘walking simulator’. Honestly, this time that’s not even a bad term: Shape of the World is heavier on the walking and lighter on the everything else than the afore-referenced Tacoma, or other games of that ilk. In fact, the game it reminded me of most sharply and directly is Proteus, another game about walking around a brightly-coloured, vaguely-shaped island of indeterminate anything (and a cut so deep I can’t actually find my old review anymore). Both games involve a lot of walking and a lot of not understanding what exactly is going on, as well as sudden colour changes and the occasional bout of flight. 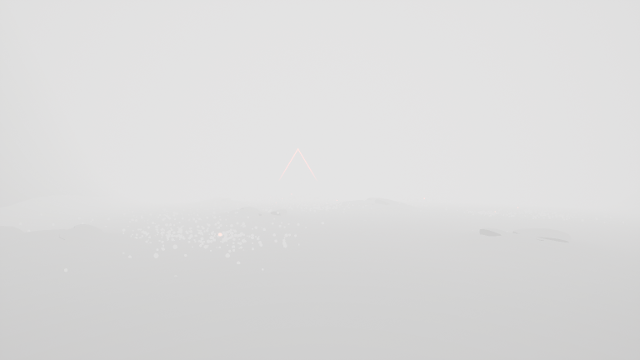 A fun world of grey nothing.

There’ll be nothing around you but grey clouds and silence. Not a living soul in sight. You’ll wonder if you accidentally launched Great Britain Simulator by mistake. You’ll try exploring here and there, only to find that most directions end in ‘invisible’ walls, a different grey to contrast the original.

Far in the distance, you’ll see the one thing that’s different: A vague floating red triangle. Since this is the only thing that is anything, and the only path that isn’t immediately blocked, you’ll follow it.

As you move, the world starts coming to life by degrees. Plant stalks unfold into existence as you draw close, disappear when you move too far. You’ll see strange animals that dart away as soon as you get close, up to and including climbing sheer rock faces. Actual terrain textures will start appearing, and sound with them. 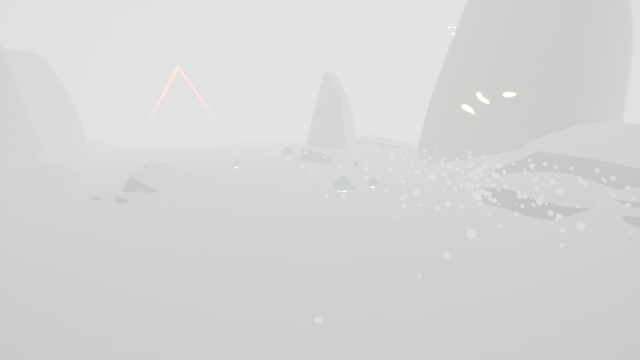 Look at all this almost-stuff.

You’ll find glowing white rocks, pillar-parts, and be told to click them — your first guidance since forever. If you do, they’ll glow red-ish and rise up — and if you click all of them, a mysterious stairwell unfolds itself into the sky, every step making a rhythmic click-clack sound that slowly veers away from you. 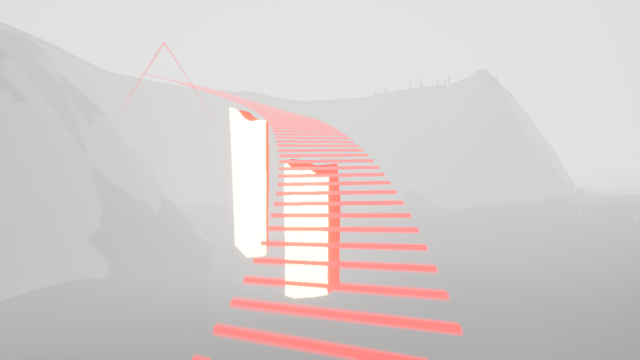 All towards the distant triangle, which has been growing bigger.

You’ll finally reach the triangle, and its smaller triangle child. They seem to form a gate of sorts, flanked by insurmountable rock faces, and they rotate to face you as you move. 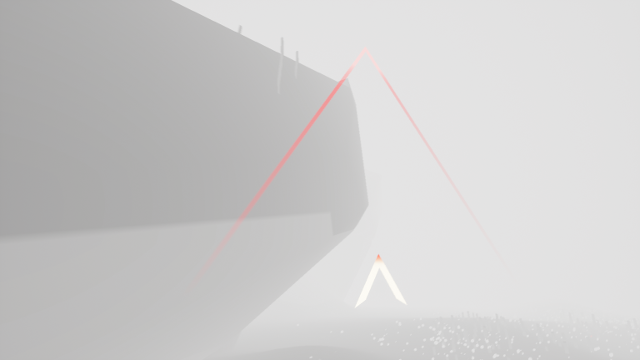 Yeah, this looks totally on the level. Nothing odd about any of this.

So you’ll step through their gate. 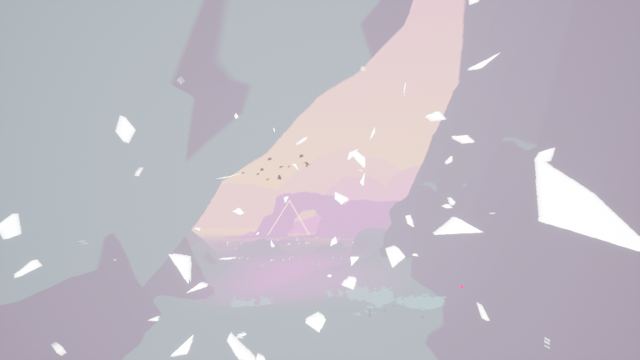 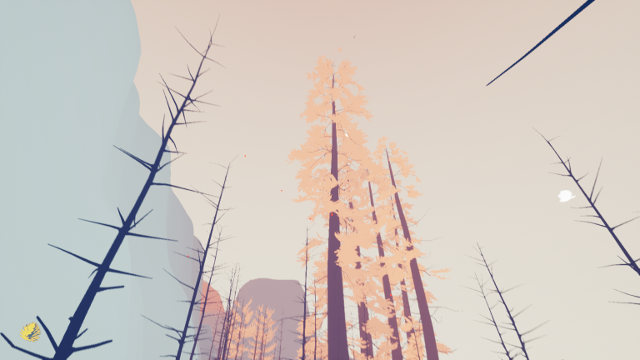 And things start getting pretty.

Without going into too much more detail, this is the general shape of Shape of the World. You follow triangle gates in the sky on a road trip through an increasingly gorgeous mysterious island. The opening scenes paint a bit of a drab picture, so let me reiterate: This game is really pretty. 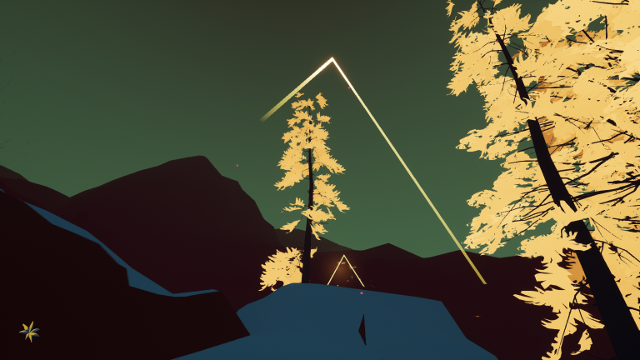 It never uses more than a small set of colours, but those colours do *work*.

Playing Shape of the World is an audiovisually immersive mystery journey. Colours shift wildly as you move through gates, painting the landscape in a different mood every time. The ambient sound is calm enough to lose yourself in, but every action you take and every gate you pass has distinct audio cues that get you into the experience of making progress. It’s not a static experience, either: Shape of the World is constantly in motion. Trees constantly fold up around you. Animals float or crawl into view from the corner of your eye, doing whatever it is they do: Floating around, eating trees, bumping into you, generally being mysterious. Even the land itself warps and weaves as you move to and fro. 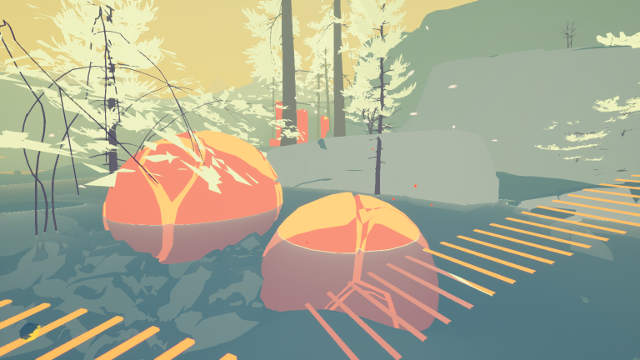 I got close to this rock and it rose up to greet me. 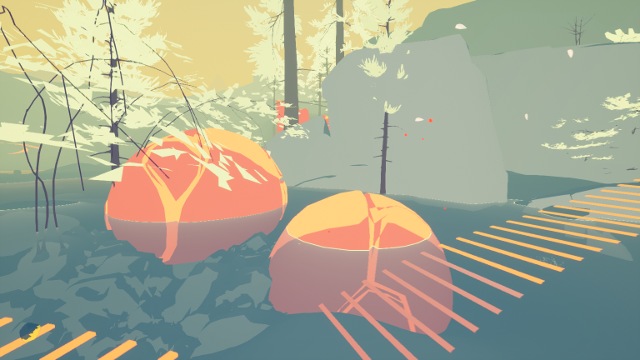 This journey-into-mystery is Shape of the World‘s main appeal. It’s a game about wandering through a strange land. Maybe you like the sensory immersion, and you just want to be somewhere else for a while. Maybe you want to poke at every nook and cranny, see every animal, hug every tree. Maybe you’re just looking to give your hands something to do while your mind is elsewhere. All of it works.

This even extends gameplay-wise. Shape of the World has two core gameplay loops, and only one of those makes concession to you having a ‘goal’ to achieve. That mechanic is this: Almost any time you move through a triangle gate, new glowing rocks appear somewhere in the world — generally close to you. Clicking all those rocks spawns new floating stairs into existence. Generally, those stairs take you to cool places that you otherwise couldn’t reach. Sometimes those places are the places you need to go to progress the adventure. Sometimes they’re just cool vantage points. 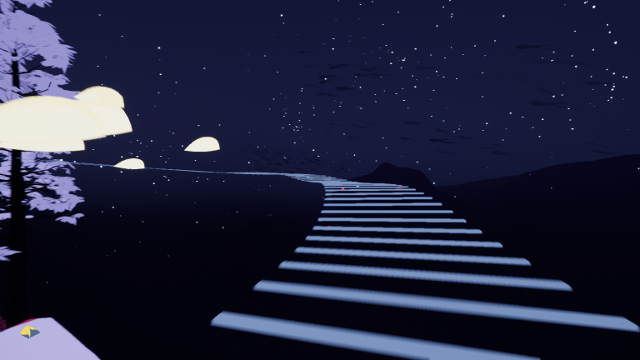 Sometimes they just take you to the stars.

It’s not just floating stairs. Sometimes there’s jumping, or water, or the landscape shifting in unpredictable ways. But whatever the outcome, the shape is the same: To progress on your road trip, you’ll need to move through triangle gates, solve glowing-rock puzzles, and see what pops up. 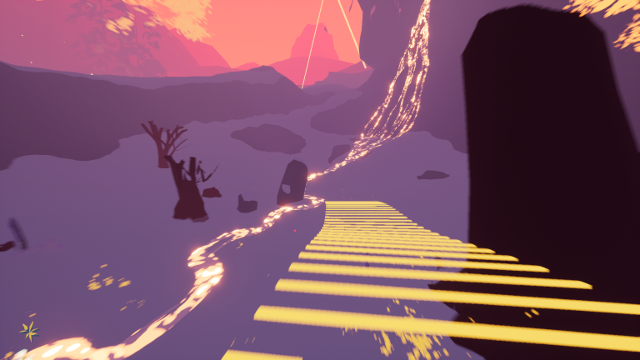 Shape of the World‘s other gameplay loop is about planting trees. 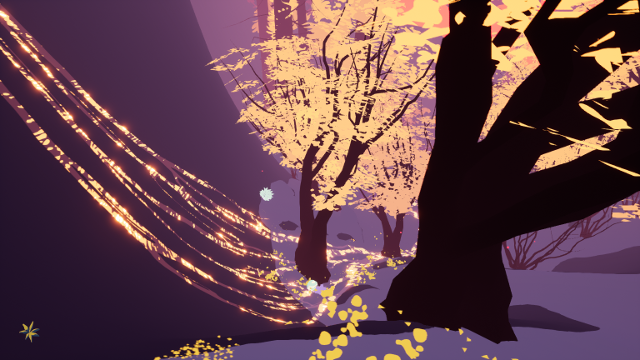 That wasn’t there before.

Sure, trees spawn into existence around you as a matter of course. That’s just a thing that happens, it’s not even weird. But you can also learn to plant them manually. You’ll occasionally find sets of fives floating ‘seeds’, in a line or a circle or what have you. Grab all five, and you gain the ability to fire off smaller seeds, that blossom into flowers in a span of seconds if they hit fertile ground. 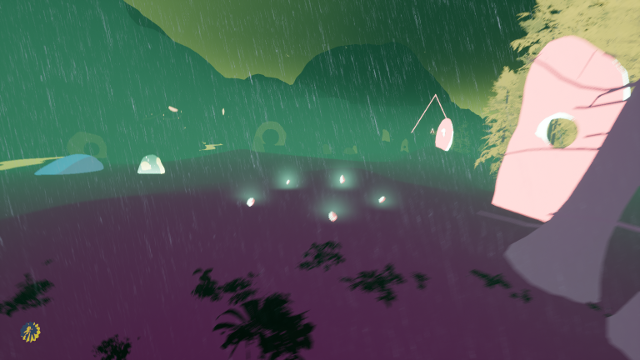 Ooh, I don’t think I have these yet.

I want to emphasize that growing trees has no functional gameplay impact. I mean, I guess it could have: Just as you can plant trees, you can also delete them with a click, and doing so generally bumps you forward towards the erstwhile tree a little bit. Maybe speedrunners could use that. I’m not too proud to admit I planted some distant trees just to zip through some terrain, or to climb a slope I maybe wasn’t ‘intended’ to climb.

But that’s not the core reason for this system to exist. The core reason that Shape of the World lets you plant trees wherever you want is that maybe you thought there weren’t enough trees around. Maybe you just wanted more trees. 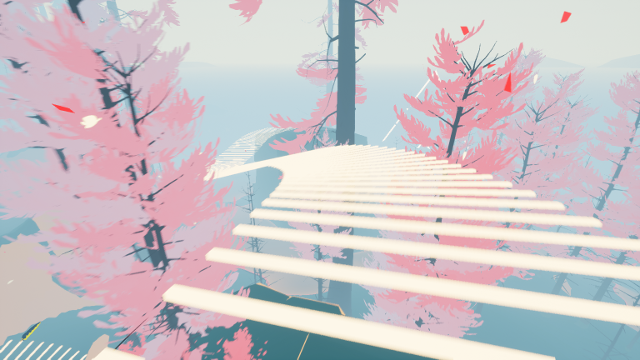 I see no problem with this. We could use more trees.

Shape of the World is an… interesting game. It’s maybe the purest expression I’ve seen in a while of a game that doesn’t care about what games are ‘supposed’ to be. It barely has rules, it hardly has a goal, and only some of its systems make any concession at all to the idea of progress and completion. More than anything, it seems content to just be a space, somewhere you can exist for a while. Hang out with the floating squids and the turtles that grow mushrooms on their back. Watch the rain fall. Swim through the caves. There are hidden seed packets that grow different trees, and achievements for getting all of those and for finding all the optional rock puzzles, so it does provide the collectionist and the achiever with things to do. And there is an ending, and I enjoyed getting there and watching it — if for no other reason than that I enjoy innovative credits. 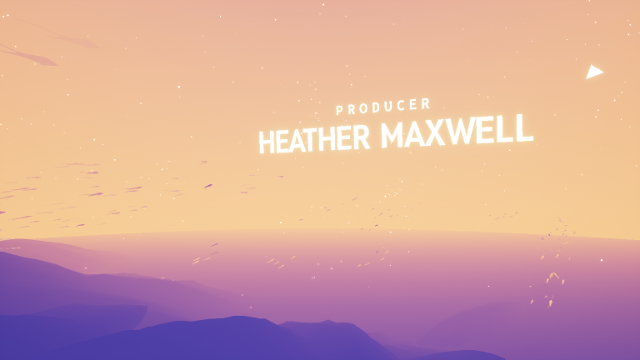 The credits appear in the sky wherever you are watching, but as soon as they start appearing their position becomes fixed, making them in-world objects for a while.

But if I were to recommend Shape of the World to anyone, it would be on the strength of what it does best: Being a cool space to hang out in for a little while.

Shape of the World currently runs about thirteen dollars on Steam, or the current-generation console of your choice. Not too bad a price for a one-way ticket.

Jarenth has done serious systems thinking for his day job all week, so he appreciates this chance to wax a little more poetic. Suggest a return to form on Twitter or prevent him from falling into a black farming hole on Steam. And if you dig Indie Wonderland and Ninja Blues in general, why not consider supporting our Patreon campaign?