Regular readers of this column will know that I generally only review two types of games: Games that I’ve been carefully and anxiously awaiting for many years, and games that I didn’t know anything about until I bought them ten minutes ago. Digital Sun‘s Moonlighter is, surprisingly, the former: I’ve had some form of reminder tab floating around my Chrome hellzone ever since the first announcements and teaser trailers starting surfacing back in 2016. I try not to get prematurely hyped, but Moonlighter purported to fill an item-shop-shaped hole in my heart, left there by perennial darling Recettear and only somewhat tided over by the likes of Pixel Shopkeeper [reviewed here] and Holy Potatoes! A Weapon Shop?! [reviewed here].

Yeah, so I have a type. What can I say? Most video games are some form of power fantasy, and item shop games are a type of power fantasy I crave right now more than anything else: The ability to engage in ethical consumption under capitalism. Or, well, ‘ethical’ — I know times are tough right now, grandma, but if you can’t afford the ridiculous price tag I put on this stack of apples you’d better get the hell out of my store.

Moonlighter‘s title involves just a bit more green lava lamp slime than I would have expected. 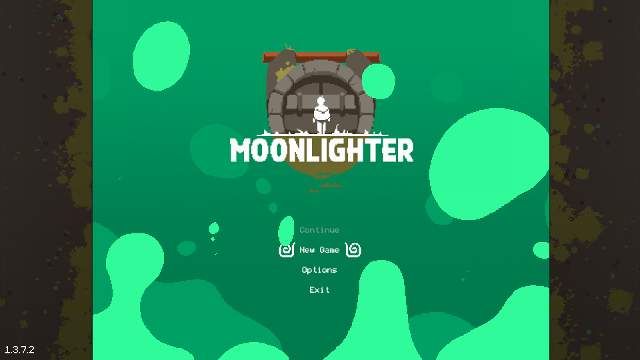 Like, I generally don’t have high expectations for this sort of stuff, but…

Moonlighter‘s menus aren’t super anything to write home about. They’re in the same audiovisual style, which I always appreciate. Beyond that, they’re just… there. Small set of graphics options, audio options, ‘game’ options — including a recommended difficulty of ‘hard’. And a control scheme that includes both keyboard controls and a ‘generic gamepad’ that automatically maps to my Xbox 1 controller, which a recommendation to use the latter (controllers) over the former (keyboard). Which I’m fine with, I assume the game knows itself better than I do.

“Among the stars of the night, there is a land as old as imagination.” 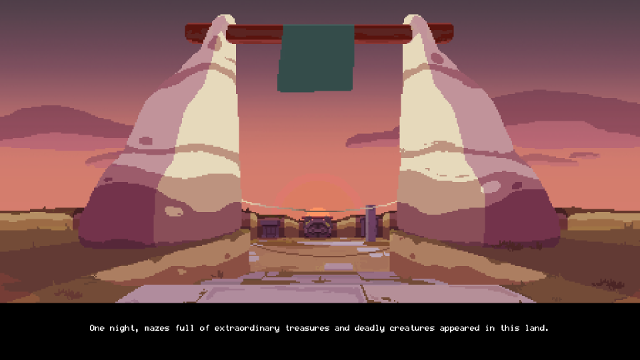 No, even *older* than the United States Supreme Court, but thanks for asking.

Over the course of several gorgeous pixel-drawn still art slides, a scene is set. In a weird distant land, there are Dungeons, capital-D: ‘strange, ever-changing ruins of unknown lands’. People delved these dungeons: Heroes, who intended to uncover the Dungeons’ secrets, and Merchants, who hoped to find valuable artifacts. A town called Rynoka was set up nearby for twin reasons of curiosity and capitalism. 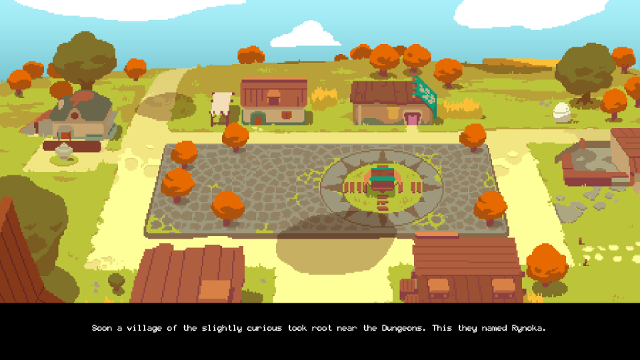 Then people started dying in the Dungeons, and the whole thing was sort of shuttered. This was hard for everyone, especially for Will, ‘the young owner of the oldest shop, Moonlighter’. Will has designs on ‘opening the mysterious fifth door of the Dungeons’, and guess what? 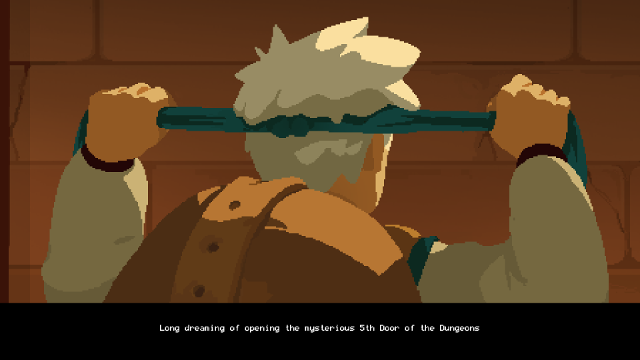 Will is *ready for action*. 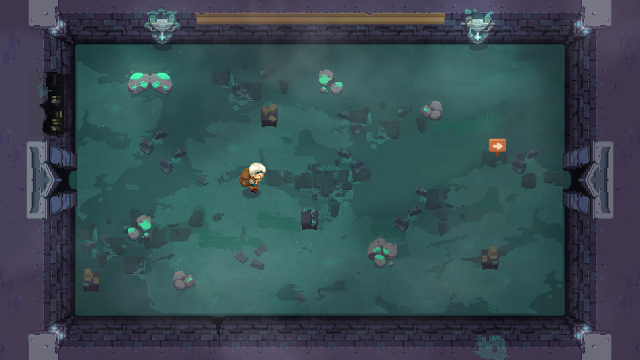 Will is still ready for action, just in a smaller, more pixelated format.

The scene opens on the eponymous Will, doubled over and panting. Can’t be easy carrying a backpack the size of your own torso everywhere. But Will quickly recovers, turns upright, and looks forward, to the open door on the right side of the screen. A tempting arrow sign points that way. I guess that’s where we should be going.

Will walks to the center of the screen. Then, up top, a scroll unfolds. It is a Scroll Of Tutorial Visualization. 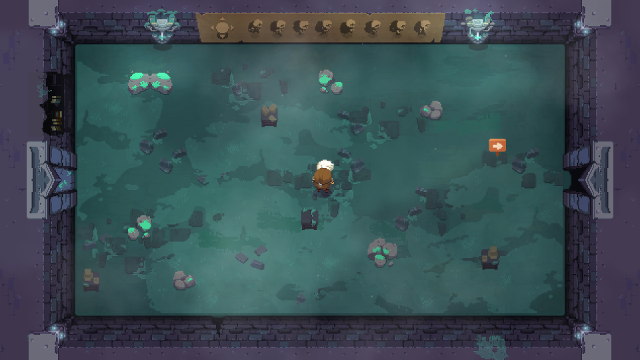 The ancient sun-like symbol on the right has long been thought to symbolize the left analogue stick on a gamepad controller.

I’m Will, now. Call me Will. I tilt the stick, and Will walks — I walk — around the dirty dungeon floor. There are some moldy tables and stacks of paper, but Will just juggernauts through them, leaving even more messy devastation in his wake.

Then he falls on his face. 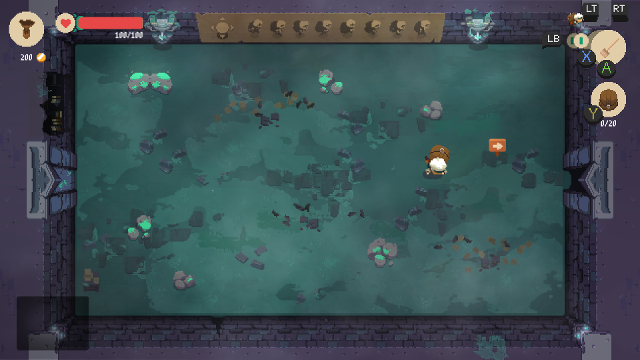 Okay, okay: What actually happens is that I start experimenting with the other buttons. As I’ll officially learn in the very next room, the left trigger lets Will do a leaping roll. Yes, still with the giant backpack. It’s more impressive than that: Will can easily clear massive chasms with this leap-roll. There’s about four reasons why this should be impossible, but Will laughs in the face of each of them — capitalism beats physics nine out of ten times.

The dodge-roll is also valuable for getting past the ancient floating golem guard, forever blocking the one bridge passageway through the next room. It might have a stone shield as tall as I am and twice as heavy, but listen: dodge roll, and we’re gone. Similarly, the two walking cauldrons in the room beyond fire a constant stream of blue energy bullets, which would be a pain to get past for anyone less agile than Will. But- 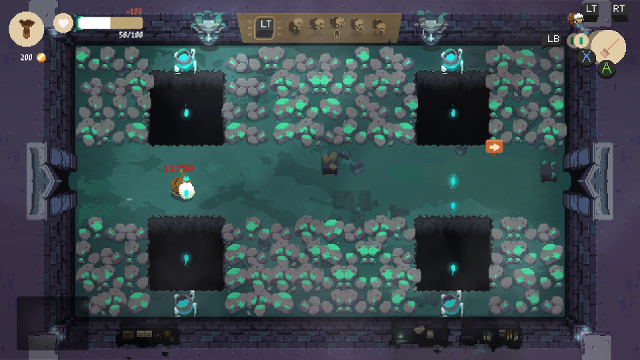 That one didn’t count.

The room afterwards teaches me to fight! With a broom. Listen: Dustforce taught me to never underestimate brooms. You can use them for cool platforming and aerial acrobatics, or in the case of Moonlighter, for breaking pots by twos and threes and killing little one-eyed slime globlets. The pots handily also contain healing potions, which I can use with the right trigger in case things get hairy — but not so hairy that I die instantly. 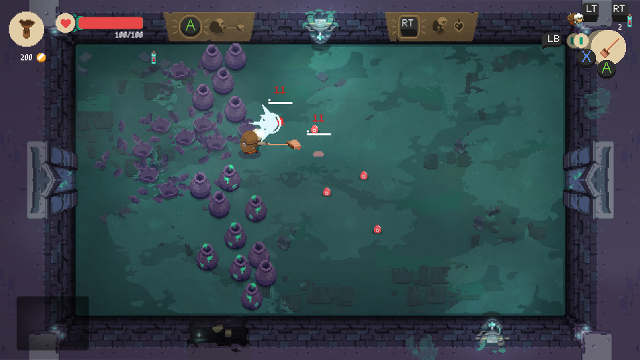 Killing tiny slime monsters is what all the real heroes do!

The next room — yeah, I get that this part of the review has a strong theme — teaches me three things. One, I can do normal attacks with my broom, but also a special charged attack, where I gather energy and then run straight through pots and enemies. Two, the animations in this game are honestly pretty impressively crisp. Look at this: 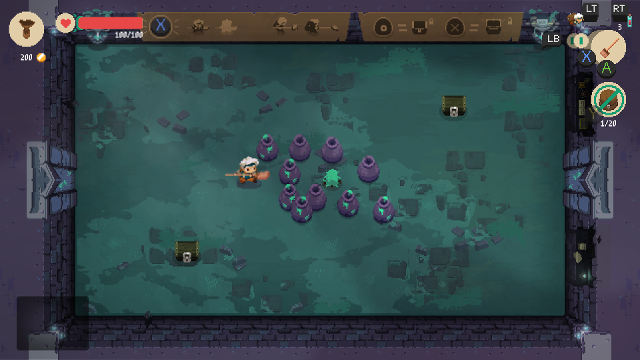 Particularly given the limitations imposed by the palette and the aesthetic, everything in this room looks really dang good.

And three, there are treasure chests in this dungeon! I can loot them after defeating the one enemy, at which point the locks on the chests mysteriously pop off. They’re filled with… broken swords and ancient pots, which I guess is nice? Could be nice? It’s not like it super matters right now: My backpack seemingly has an incredible amount of space, so I just load up whatever I can get my hands on. 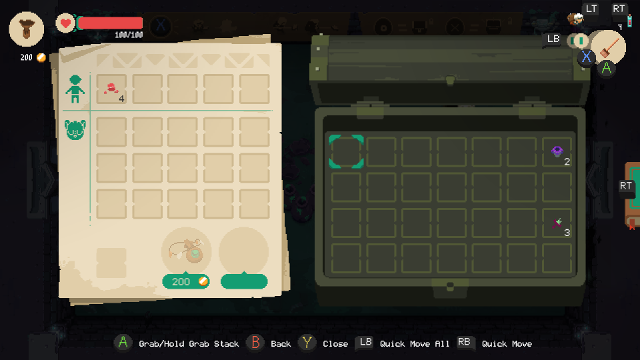 That red stuff I have in there already is the calcified remains of the slimelets I killed. Listen, someone might pay me for it.

It actually turns out Will holds a detailed record of everything he’s ever found in one of these Dungeons. Right now that’s literally only the things I found in the last five minutes, but you gotta start somewhere. Each of them has a description, an image, and four smileys with question marks that I’m sure I’ll learn to appreciate later. The book is actually already divided into five chapters: One corresponding to four different Dungeons, and a fifth one for ‘merchant stuff’. Hey, my broom is in there. Will is thorough. 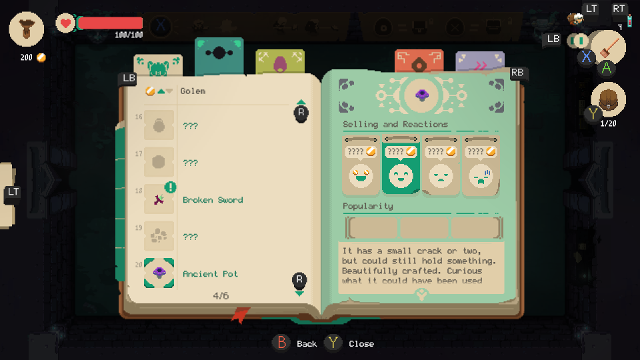 But since I didn’t think to screenshot that page, here’s what Will have to say about ancient pots instead.

Anyway, then I walk into the next room, the final room, and get swarmed by an endless horde of aggressive golems. 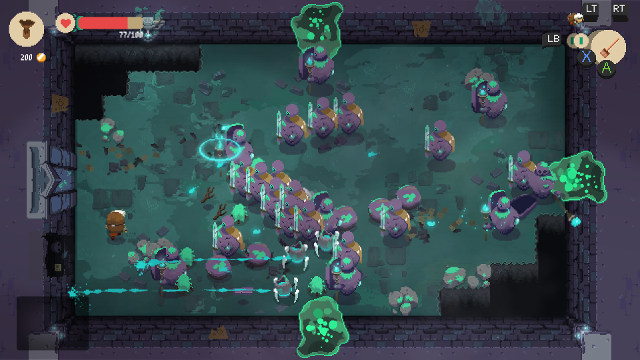 Guess the tutorial is over.

I get spit out through the green slime of the dungeon floor, and dragged back to town by an old man named Zenon. While I sleep, he backstory’s absentmindedly: Will is obsessed with cracking the mystery of the dungeons, as was ol’ Pete, who left Will his theories and drawings before disappearing in the aforementioned Dungeons. Then Will wakes up and Zenon monologues some more: I’m a Merchant, not a Hero, guldangit, and I should focus on running the Moonlighter, since I’m the last member of the family that owns it. I shouldn’t be delving the Dungeons to defeat them and crack their mysteries: I should be looting them for items to sell. 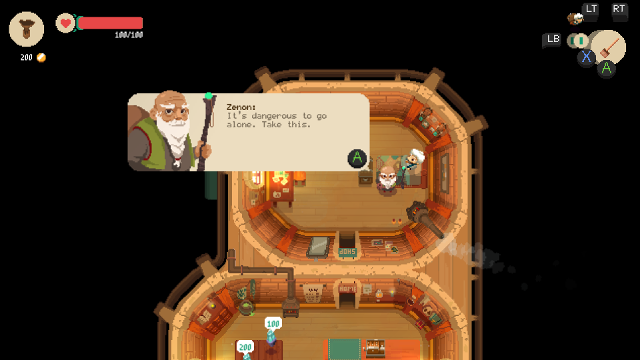 ‘And for the love of god, use an actual sword instead of a broom!’

Zenon takes it on himself to refamiliarize Will with the basics of shopkeeping, which I appreciate. It goes like this: The room below my bedroom is the shop floor, in which I have four tables for stalling items. Two of them are currently occupied with floating crystals: One priced at 100, the other at 200. They seem identical, but I assume this is a lesson: Zenon says that to sell an item, I must know its Value as well as its Demand.

Step one: I need to open the dang store so people can actually come in! Which I do, and they do. 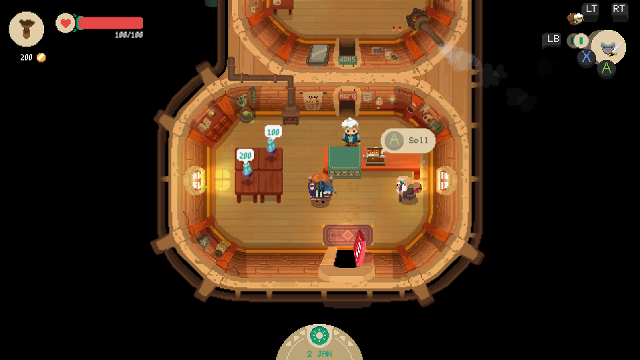 Welcome, welcome! First customer! Buy something or get out, why don’t you?

People walk in and mill about the store. One walks up to the 100-crystal, picks it up, looks at it. Don’t ask me how the low-fi graphic style conveys all that, it just does. They broadly emote a contended smile, then take the item to the cash register. I press A to Sell, and now my meagre purse is one hundred coins richer!

A second person checks out the second crystal. They don’t emote a contended smile, but instead, an almost disgusted frown. They put the item back and leave. 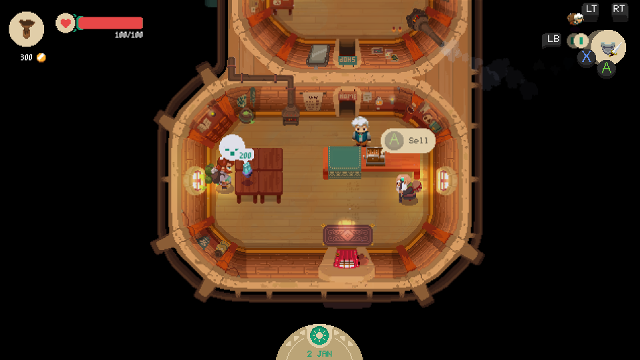 Zenon quickly explains the basis of economic supply and demand theory to me. Wow, thanks, old man. Sell popular things for more money and unpopular things for less? Price items what you think people will pay for them? My mind, she is blown. Then he checks his watch and tells me it’s night now, shopkeeping hours are closed, and I should probably go check out the dungeon again. With my real sword, this time.

I walk outside to find that, hey, it is night. There’s a few dozen people walking around, so I talk to each of them, three times. That’s how much they have to say. Maury here is a purveyor of Dungeon Artifacts. Tomo is an overly excited scholar. This person… is nameless, and faceless, but they can’t stop talking about how cool it would be to have a blacksmith in Rynoka again. Then we could buy new weapons and armor! If only someone would check the town board and pay the settlement fee. If only someone had that kind of money. 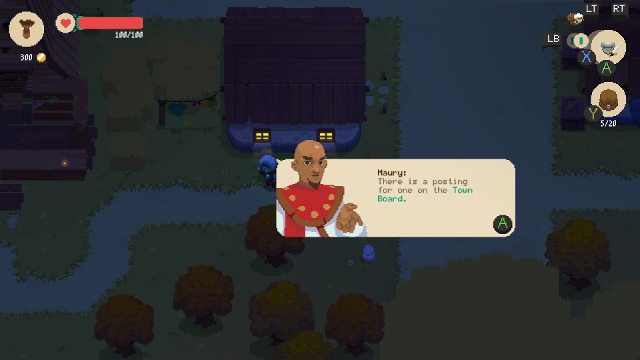 I’m starting to think this game doesn’t do subtlety all that well.

Through talking to the townspeople — and Zenon, who didn’t leave so much as went to stand right outside — I get a rough idea of what’s expected of me. Rynoka’s in bad shape ever since the Dungeon economy dried up. Only the Golem Dungeon, the easiest dungeon, is open to the general public. What this town needs is an infusion of life and resources. If some brave Merchant were to enter the dungeons at night, and sell the wares he found during the day, that would attract travelers and adventurers back to Rynoka. And then maybe that money could be invested into town infrastructure. And maybe that Merchant could get more powerful weapons and armor, and magical enchantments, which would allow him to delve the dungeons even further, and find more expensive artifacts. And maybe even disco-

Okay, I see Zenon waving that stick of his at me. No mythical discoveries about the intrinsic nature of the Dungeons, got it. Just good old-fashioned plunder-based capitalism. I can do that, I’m pretty sure. How much do you want to bet I’ll be rich and powerful by the time you turn over this page?