One of the neatest aspects of doing this repeated indie game reviewing gig over the years is that it’s exposed me to tons of games I wouldn’t otherwise have seen or played. It’s part of the reason I started the whole thing, really. And this has only gotten better as I got onto a few indie game review mailing lists, meaning I semi-regularly get announcements in my inbox about dates and review opportunities for games that, from my perspective, just sprung into being fully-formed.

The funny thing about a vaguely pre-2000s spy game like Safe House is that I don’t have to tell you what the menu sounds like. You already know. Think of old spy settings and close your eyes, and you’ll hear this menu screen. 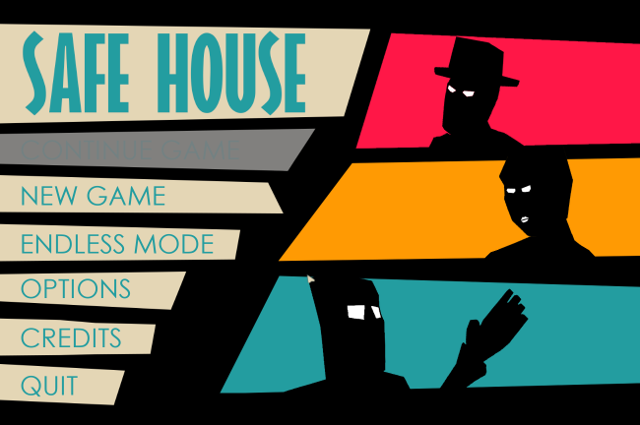 I’m not quite sure what the time frame is like, but I worry that if I said ’60s’ or ’70s’ your mind’s ears would go a *completely* different direction.

Safe House‘s first impression is relatively good: Nice use of colour, good music, simple menu structure. I always appreciate it when menus use the same general style and colour scheme as the rest of the game, and Safe House delivers there. The credits additionally teach me that ‘Labs Games’ is a one-person outfit, though it doesn’t tell me who that person is. But that’s spy games for you, I guess. And apart from two game-starting options, that’s it as far as the title goes: A fairly minimalist but essentially feature-complete approach. I give it one curt nod of appreciation out of three. 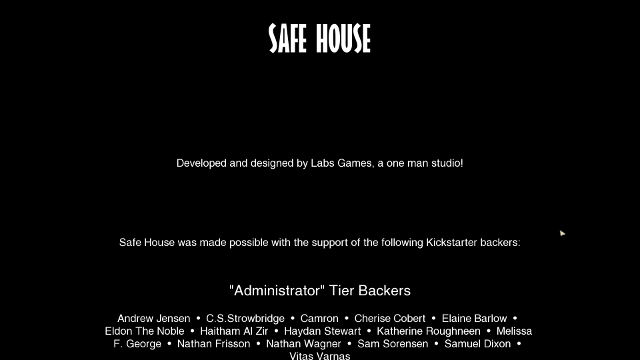 For real though, the creator’s name is an eternal mystery.

‘Endless Mode’ sounds a little dramatic as far as first play experiences go, so I go with New Game. Yes, I accept the fact that starting a new game ‘may overwrite any previous save data’. I have some good news re: The possibility of that existing in the first place.

Safe House‘s opening cutscene is… interesting. For one, it’s in-engine. For two, it’s not an engine that really supports in-engine cutscenes. I watch a camera pan down a night sky, and pass over several empty rooms that were clearly never intended to be seen this up-close. 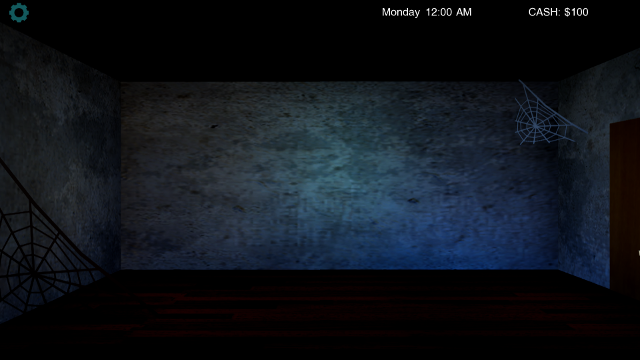 As far as first impressions go, I’m not *exactly* wowed.

The camera eventually lands on… GAH! 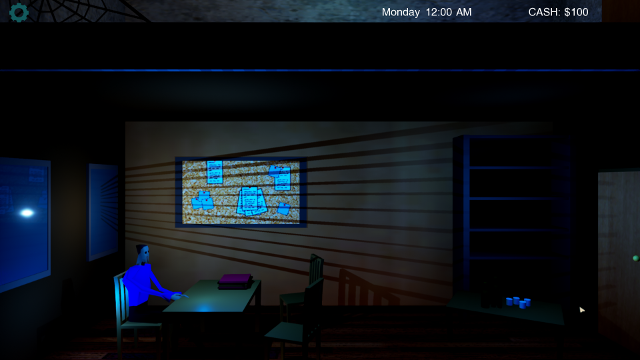 SCOURGE IT FROM THE EARTH

Before I can enact the very human response of flinging my laptop across the room, the camera mercifully zooms out. Then a talking head pops into view. I guess it’s maybe the ‘human’ figure I saw? The man I’m looking at has more-or-less the same haircut, but a different colour scheme. Plus it seems like he’s addressing me, all while the camera still meaningfully lingers over the distant figure. I play with the idea that this figure is supposed to represent me, in-game, and find that I don’t love it. 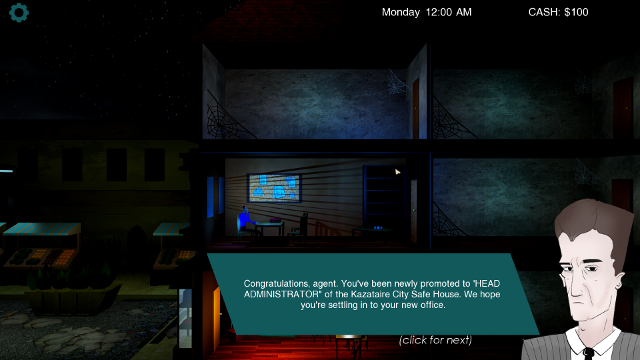 Anyway, I’m apparently the head administrator for this safe house. Listen, though: I’m still not over that figure.

The man introduces himself as Lewis, and explains that I’m the safe house manager here in scenic Kazataire City, which I’m sure is a real place and in no way the result of a name generator gone haywire. I’m to manage agents and operations here.

Then ‘I’ start talking back. Except I’m a shadowy silhouette, and not a blue-garbed disasterpiece. So now I don’t know what to believe. 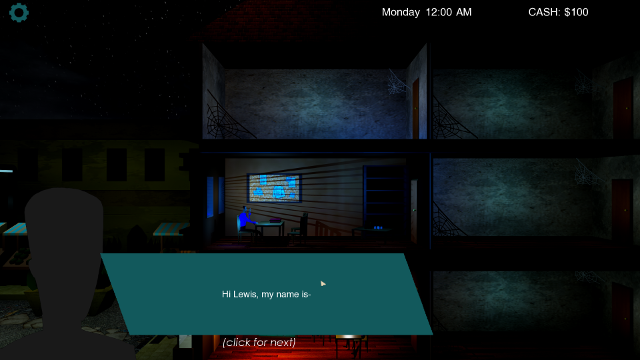 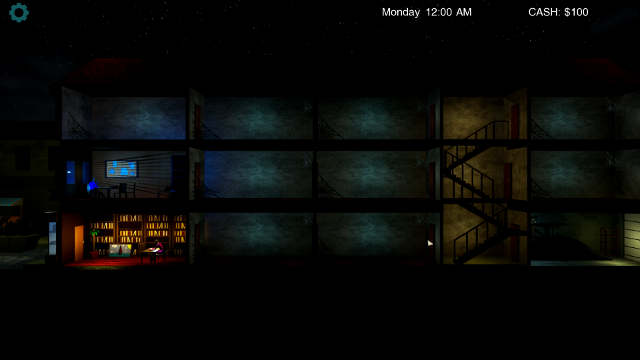 On the downside, the panning is torturously slow and the farthest zoom doesn’t even capture the whole building. On the upside, I now have an ugly and mostly-empty building to look at.

There are currently two rooms in this building: A mostly-empty loading dock to the right, and a room full of books to the left — it looks like an ordinary bookstore, because it is an ordinary bookstore. But it’s also the front for this spy safe house. Which otherwise contains no spies, or anything related to intel gathering. But then, what do I even know? Only as much as I need to.

This first night, Lewis explains, we’re going to be focusing on this book store. All throughout the night, I can expect ‘spies and agents’ to enter. They’ll say a codeword, and I have a list of accepted codewords. If they say a right one, I have to say a particular one back. To which they then have to say a second codeword. Do all that right, and I’m to let them in; a failure in any step of the process means I should kick them out, which is probably not a euphemism for anything. Even though I’ll get some cash for each successful acceptance or rejection. Don’t worry about it too much.

Lewis disappears, and the previously-frozen clock on the top of the screen starts counting. Almost immediately, a shady-looking figure walks up from the street and enters the building, ringing the entrance bell as he does. A turquoise border around the book store room invites me to click on it, which automatically zooms the camera into the scene.

“How far past midnight is it?” the figure asks, and I click on the dossier button and pull up the list of code words. Hey, this is actually pretty cool so far. 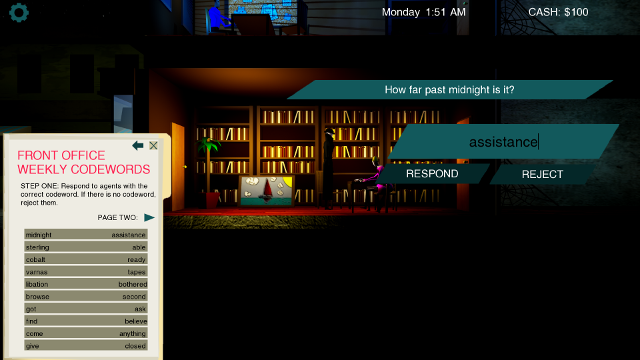 And a little stressful, since I can immediately tell the clock doesn’t stop counting — this is *real-time* code cracking, babies.

Hmm. Let’s see, let’s see… I was expecting singular words, but — there! The agent said ‘midnight’. The reply word for that is ‘assistance’, which… I guess I actually have to type that into the box directly? Do I have to work it into a sentence? Or… 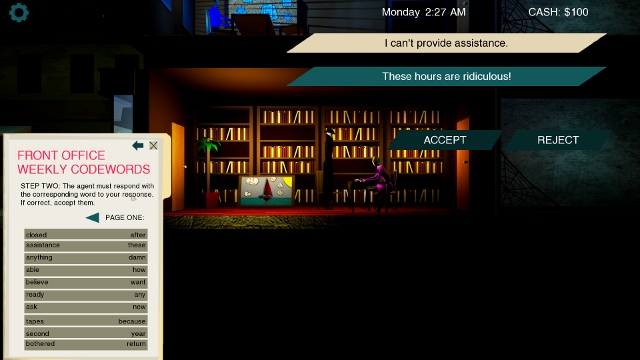 Ah, okay. My book store character automatically makes a sentence out of it. That works out!

The agent replies again, so I flip over to page 2 of the dossier. My word was ‘assistance’, so they should use ‘these’… Yeah, that’s in there. Code accepted! I hit the accept button, and the sound of a cash register suggests I made the right call. And the large floating green letters ‘+$480’. The Safe House now has 580 dollars.

The agent leaves. A few seconds pass, translating to about forty minutes of in-game time. Then a second agent walks in, looking for all the world like a carbon copy of the previous one. That’s some good spy disguising — I’d never be able to tell!

“We’re in for a cold winter.” I check my code book once, then twice… No, I don’t see any of those codes in there. That means I hit the Reject button, right?… 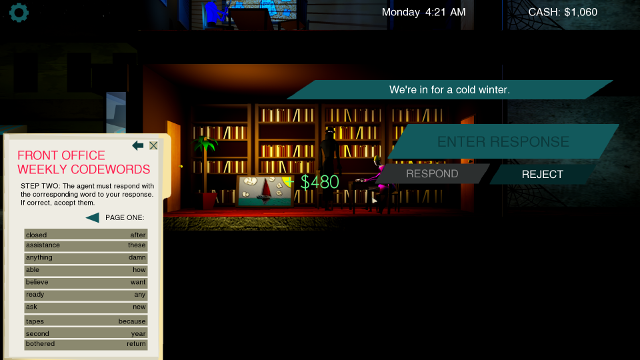 The rest of the night proceeds apace. Six agents show up in total, and I correctly accept or reject all of them. I end up with almost three thousand dollars in cash, and — importantly — zero dollars in lost cash. Which is a thing, apparently? All the money I’d lose from incorrect decisions go to ‘our enemies’, whoever those are. 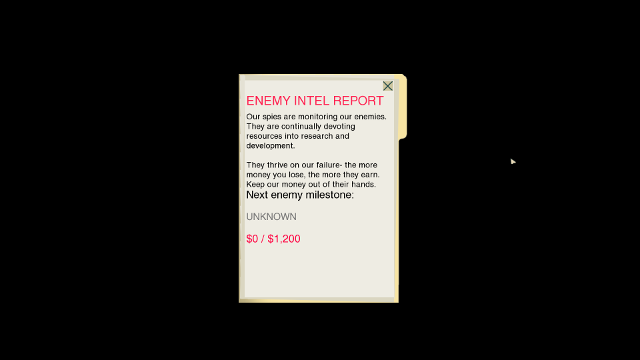 They chose the *wrong* person to failure-bet on!

The second night, I’m introduced to Marcel, Kazataire local, who proceeds to tell me about Kazataire’s bloody history as a former French colony. There are tribes, there’s class inequality, civil war and violence, and the whole thing is told in a way that puts it on the exact border of ‘I don’t care about this’ and ‘I worry that this might be super racist’. Luckily, Lewis swoops in to save the day, by introducing a new gameplay mechanic: This second night, I have to run two rooms! Packages will be delivered to the shipping bay on the right, and I have to compare their codes to the list of allowed codes to accept or reject them.

You may worry that this sounds mind-numbingly easy. 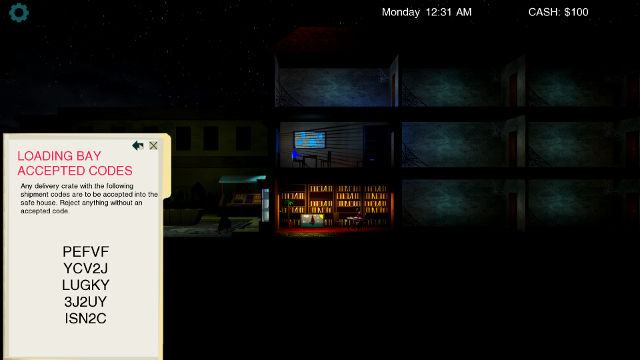 The second night basically goes off without a hitch. Moving between the rooms is a bit of a hassle, on account of the aforementioned slow panning and insufficient zoom. But I find a camera position where I can see the edges of both rooms well enough to spot the tell-tale turquoise border… while still keeping my dossier open. Equally mildly-annoying is the fact that I have to swap pages every time a new room comes up: It’s not a whole hassle, but clicking the tiny slightly-unresponsive arrow buttons isn’t super engaging gameplay either. All the same, I end the night with another two point five thousand dollars gained, and none lost.

Night three, Lewis finally loosens the reigns a little. A little. From now on, he explains, each night will have three phases. In the first ‘Construction’ phase, I get to add rooms to the Safe House! For now I can only build one room, a cryptology office, and incidentally my mission for today is to build a cryptology office. But more rooms are promised later. In the second phase, ‘Assignment’, I can assign my own agents to missions… just as soon as I get agents, and missions, which I’m sure will happen any moment now. And then there’s the third phase, which I forgot the name of, but let’s call that the ‘the stuff you’ve already been doing’ phase. It’s the phase where I make money, instead of spend it. 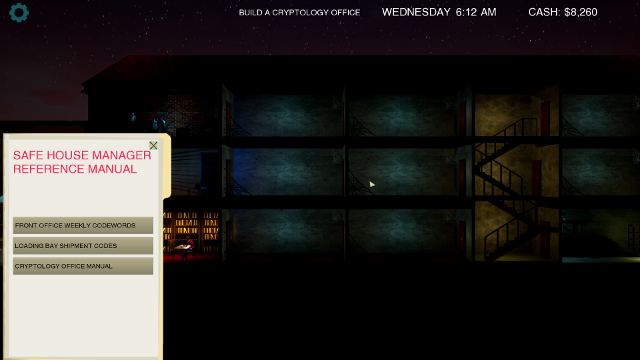 Look at my fancy cryptology office to be, though! If you can find it.

It’s not until after the cryptology office is finished that Safe House really starts opening up. For one, I get immediate access to some more construction projects, like the infirmary. 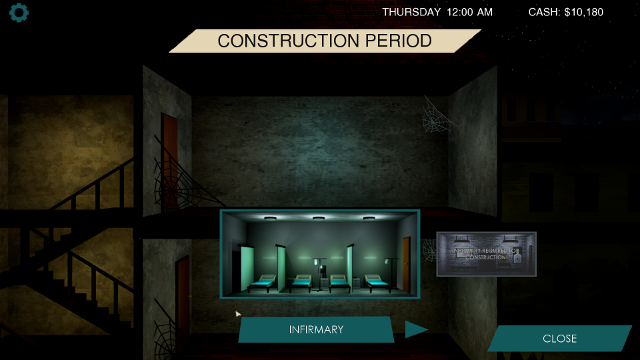 Because spies that get hurt in the line of duty can’t just roll up to a local GP.

But more importantly, for two, I learn that (some?) new rooms add new activities to the Management Phase repertoire. Now that my cryptology office is finished, I’m not just answering spy codes and checking package labels, but also solving cryptography ciphers! Which looks like… 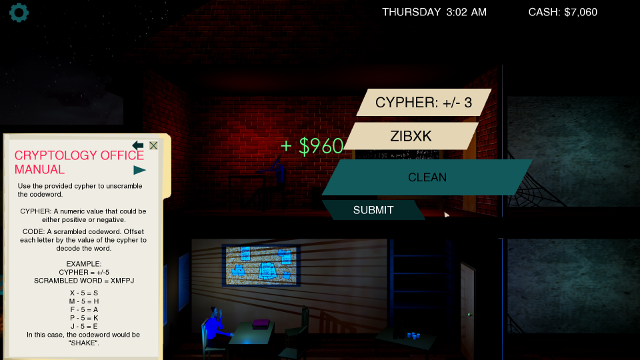 At any rate, I think I see the emerging shape of Safe House. Build a safe house, manage agents (at some point), do activities to earn money and don’t fail too often. Should be easy enough.

I’m going to end this review page now, before any of you notice that I’m been staring at a backwards alphabet cipher task in rising panic for about thirty seconds now. It’s easy, things are easy, and I’m definitely not planning to cheat in any traceable way. What kind of spy master can’t say his ABCs backwards?

Not this spy master, that’s for sure. 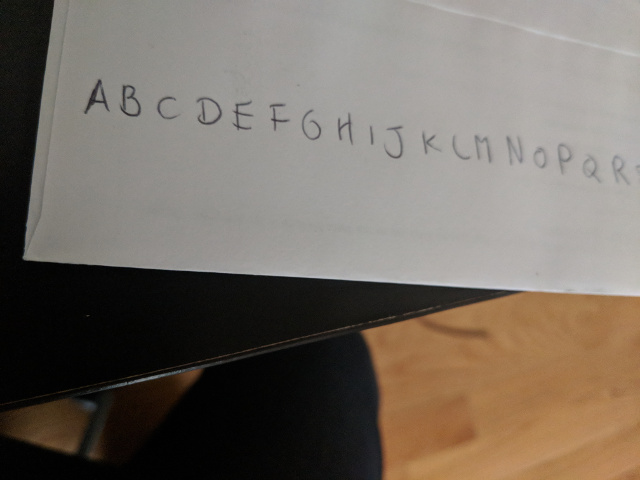 The mere *accusation* that I would need tools like this to help me do my job is preposterous.