Glass Bottom Games is one of the few development teams whose work I actually follow. Mostly due to serendipity, though the cat-heavy focus of their games probably weighs more than I care to admit. Jones On Fire: Kitties Are Cute And Should Be Saved was the first-ever game that I bought to play on my tablet — man, remember tablets? And I wrote about Hot Tin Roof: The Cat That Wore A Fedora in the early days of 2015, back when things were calmer and we hadn’t lived through 2016 yet (review here).

And now we’ve got Spartan Fist. Which doesn’t have a lengthy side-title like its older siblings, but if it did, it would be ‘Punch Dudes So Hard They Explode’. Because that’s what you’ll be doing in this game.

I don’t need to explain why this review exists any further, do I?

Spartan Fist sort of kicks right off. Where other games would start with a splash screen, or maybe a fancy title, Spartan Fist opens on a busy menu screen and a rapid energetic soundtrack. Most of the screen is made up of a blurry vision of… is that an arena? Where two or three people sway left to right. One of them is wearing a weird-shaped hat. Or is that a cat? 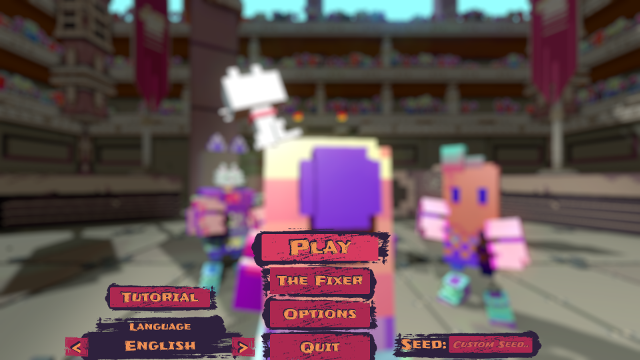 Listen: There’s a lot going on here and we’re only twelve seconds in.

If you’re hoping that the options menus might bring some more stability, you are, as I once was, a naive fool. For one, all menus are overlaid on the arena background, meaning everything you do is in service of trying to ignore that blurry sway. For two… So the main ‘Options’ button gets you into Graphical Options, which is pretty much what it says on the tin: Resolution, quality, FOV, motion blur, the works. If you want to do anything not related to graphics, you have to press the ‘Gameplay Options’ button nested inside Graphical Options. Which, as you’d expect, takes you to the place where audio settings and controls are stored. 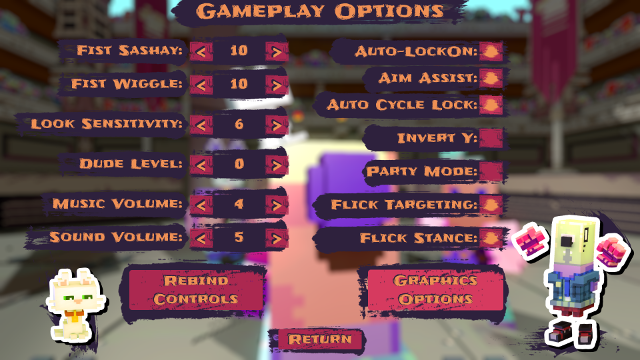 Listen: I know that yammering about options in games has gotten a bad rap over the last few years, and deservedly so. But all the same, I’m trained (among other things) as a user experience designer/researcher. And this logic flow is just… *not done*.

There’s also an option called ‘The Fixer’, which seems to hide some sort of meta-game upgrade system. Which is fine and good, and normally I’d just ignore this until I get the necessary context… Except it kind of looks and feels like parts of this have already been filled in? Why do I have an SS-rank in Max HP? And why do I start out with 709 ‘GUT$’? Did I trip an incorrect wire during install by mistake? 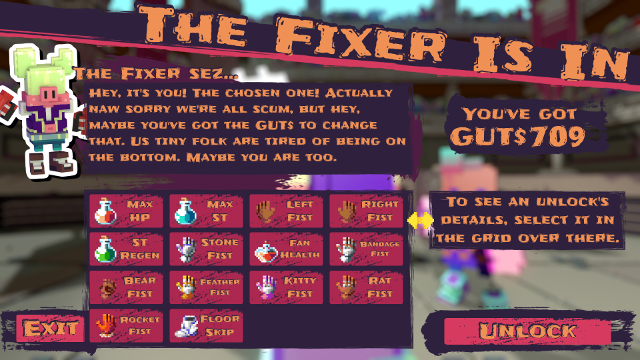 Also, you know, literally what is going on with any part of this — but for most of it, I can accept that I’ll learn that over time.

But hey, you know what I think? I think there’s a big Tutorial button just off the center there, and if I click that button, all my questions should probably get answers. That’s what I think, and you cannot persuade me otherwise. 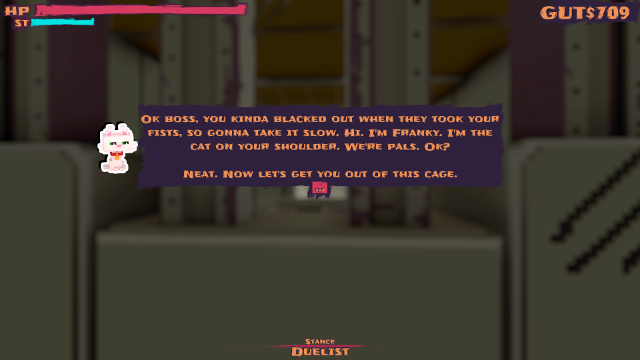 Hey, it’s Franky! From Hot Tin Roof! Hey Franky, how ya been?

Alright, so: I’m in a cage. There’s a cat on my shoulder. I used to have fists, but those were taken, which caused me to black out. Understandably. It’s apparently time to get out of here.

Step one: Look up and down! 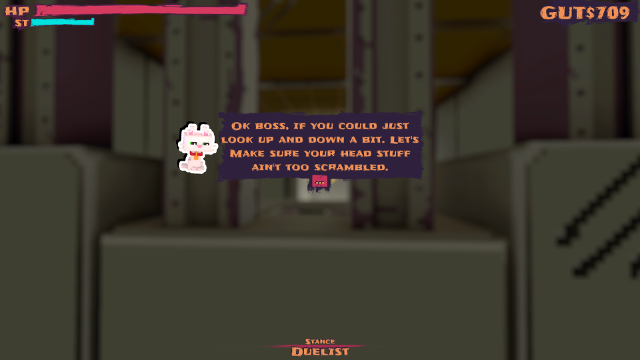 It’s easy to forget sometimes that good tutorials should cover *all* the basics. Even the stuff that more experienced players take for granted.//Also, the floor and the ceiling here are both great. You should see them.

I look up and down a few times. Two, three, four. Finally, Franky asks if I want to keep my mouse settings as-is, or invert them. Which is actually a pretty neat way of gauging control preferences through play!

Step two: Use WASD to move! This level of training is actually a little more in-depth: Instead of guiding me by hand through all different possibilities, Spartan Fist gives me a small number of training objectives. Move around, jump, fall down the hole, stick the landing. Wait, what hole? What landing? 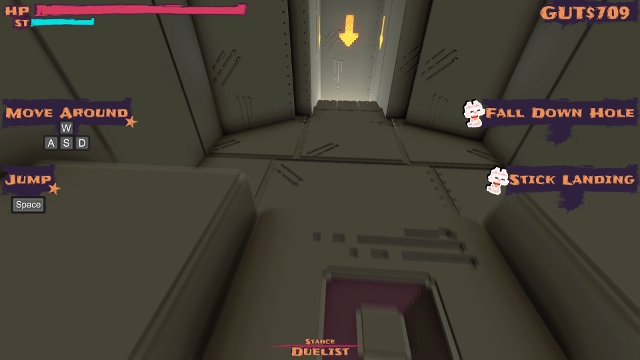 Oh. That doesn’t look ominous at all.

I jump into the hole, and fall into a fighting arena from twenty feet or so high. Franky comments how impressive it is that my knees haven’t buckled into my spleen, and I don’t have the heart to shatter her illusions re: My internal health. So let’s just keep moving before the laws of physics catch on.

Tutorial step 3 involves dodging through a number of statues — because dodging and short-range teleportation are functionally the same thing — and picking up a floating fist from a mystical pedestal. A Boxing Fist, it’s called, and it glows with the power of a hundred disappearing voxels. 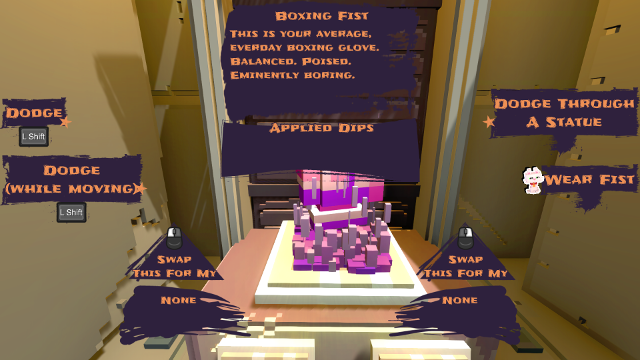 Yeah, I could see myself punch with this fist.

I left-click on the fist. It disappears, and in its place, my left hand appears at the bottom of the screen. Appropriately gloved-up. 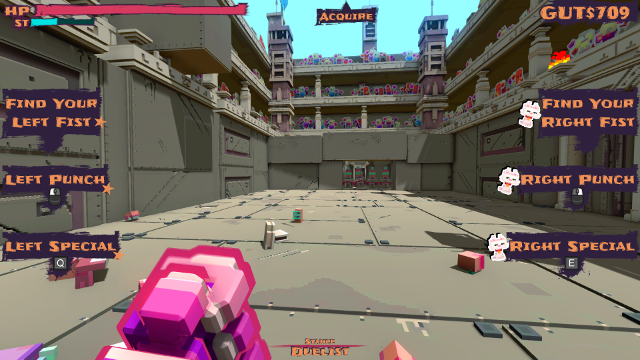 Finally, I can high-five people again!

Twenty seconds and a repeat performance on the other side later, I’m packing two full fists — and the arena is scattered with the remnants of broken statues that I no longer cared to dodge through. That, and dudes: All of a sudden, the place is packed with other people! And to hear Franky tell it, one of them insulted my mom!

There’s a few layers to fighting in Spartan Fist. First off, I control both of my fists separately: Left click for left fist, right click for right fist. Which isn’t as hectic as it sounds: When either fist is in some sort of attack animation, I can’t also punch with the other one. Rather, clicking several times seems to fire off some rudimentary punch-combos, which sometimes involve both fists at the same time. As it stands, there doesn’t even seem to be much of a reason to favor the left or right fists, though that’ll probably change later on.

There’s a little more to punching than just punching: Punches are thrown from one of three different stances. The pink-hued Duelist stance is good for dealing damage up-close and personal. The purple Brawler stance is supposedly better for fighting larger groups, and I do notice that the fighting animations change as I switch into this stance: Where Duelist had a lost of straightforward and vertical motion, Brawler mixes some sweeping horizontal motion into the mix. Finally, Updraft is the orange style for people who prefer their enemies flying, as a quick uppercut will attest. Stance-switching is as easy as scrolling the mouse wheel, and there doesn’t seem to be any cooldown or drawback associated with it. Because a real punch-master needs to adapt on the fly. 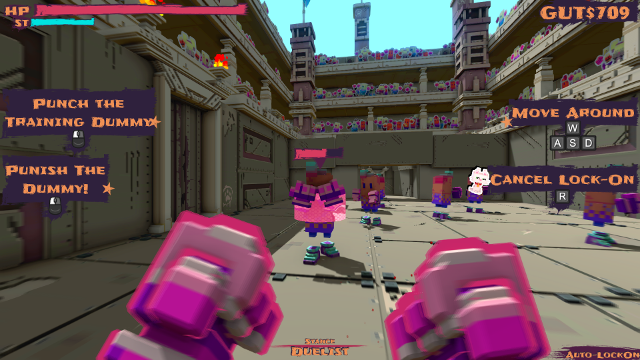 In this scene, my opponent is blocking in a Duelist stance, rendering all attacks from that stance ineffective. But if I were to switch to a *different* stance…

Finally, Q and E activate ‘special punches’ for respectively the left and right fist. These currently don’t seem any more impressive than just winding up a big hit, but again, that seems like it’ll change. Power-punches do bite into the energy reserve that also powers my rapid dodging, though, so there’s an actual trade-off here.

I punch one training dummy into voxel giblets — Franky asks really quickly if I wouldn’t prefer rainbow ‘blood’ instead — and the rest of them vanish into thin air. Behind me, a door opens, and in the hallway beyond I see a massive golden portal. Feed it a fist, the game says, either one, and it’ll open. So, with heavy heart, I give up my left hand. The golden door opens, and beyond, I find… 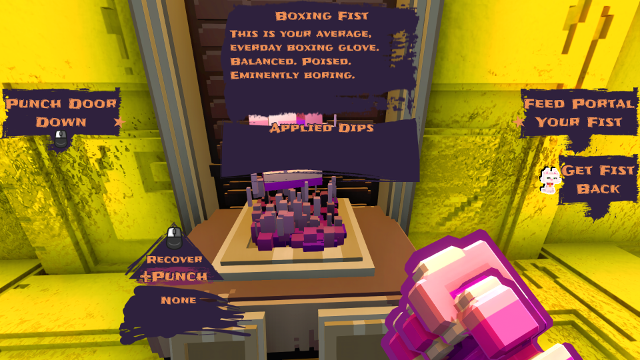 …my left hand, seemingly unscathed. A little more powerful than it was before, actually.

Anyway, some things happen in quick succession: Franky warns me that I’m up against a terrible boss monster that’ll more than likely kill me, because that’s how tutorials work. Then the boss monster kills me. Then Franky appears again, to reiterate that, no, that totally was intended to happen. Don’t feel bad about it! This is one of those games where you’re going to die a lot, but grow stronger as you do… ideally.

Twenty seconds later, I’m back in action. Spartan Fist suggests that I could go back to a menu and futz around with upgrades, but listen: Put me back in. I’m ready, coach. 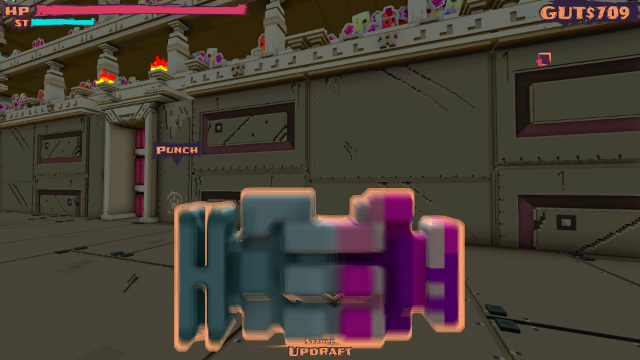 Ready to *rock*. Except for *real* this time.

Some things are slightly different. For one, one of my fists is made of rock this time, resulting in a whole new set of attacks and abilities for that fist — while the other boxing fist is still as I remember it. For two, I’m no longer in the tutorial area, but in a giant, ever-changing labyrinth filled with other fighters and terrible fire-based death traps. 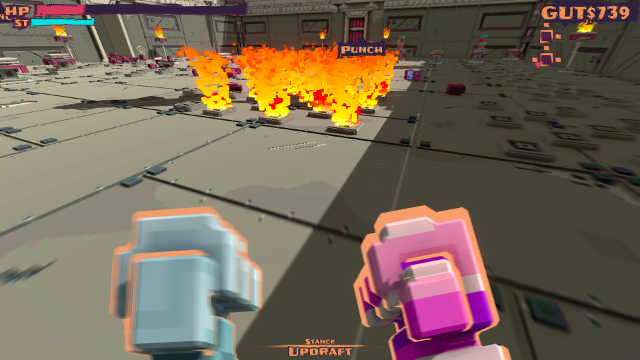 This seems like a bad place to hold a punching contest.

Through trial and error, I figure out how some things work around here. The arena I’m fighting in is made of interconnected square rooms, each their own interesting death zone. One might have a floor full of flamethrowers; the next, rotating flamethrower walls; a third still, giant metal box-sculptures that I can jump on and around. With some flamethrowers built in. As well as enemies, enemy fighters everywhere, all with naught better to do than try and punch me. Whenever I enter a room, the doors lock, and they won’t open again until I punch everyone inside into giblets. Once I do, I’m free to punch open any of the doors to different rooms, so as to repeat the process.

Rooms aren’t actually connected directly to each other. Between each two rooms is a small liminal space, sometimes containing nothing — but sometimes containing new and interesting fists, to be taken in trade for one of my existing ones. Other shrines hold ‘dips’, which I think are fist upgrades? I think the fiction here is that you literally dip the fist into this, and it powers it up somehow? 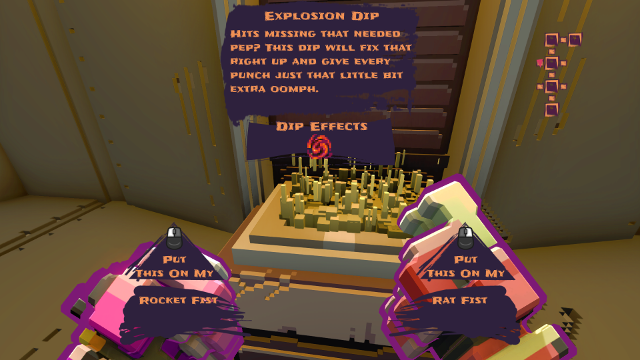 Anyway. I guess if I were more skilled, and I managed to stay alive long enough, I’d eventually be able to find the fist-eating golden door again. It’s harder than it sounds, since it’s hard to avoid taking damage: Enemies do punch back this time, and between that and the ever-present flamethrowers, my health bar jumps down by degrees room after room. There are health powerups, but they’re few and far between and seem to rain from the sky at random.

But if I did find the golden door again, I could go through it, and find the same boss from the tutorial area. And then maybe they’d kill me in a single hit again. 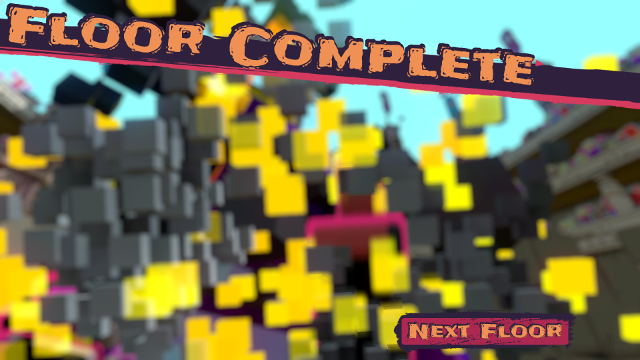 And hypothetically, if I managed to beat the first boss — maybe on my second try or so, still not really sure what the hell I was doing — I’d then be allowed to move to a second level of sorts. Maybe that could be themed as some sort of strange London Underground fighting arena? 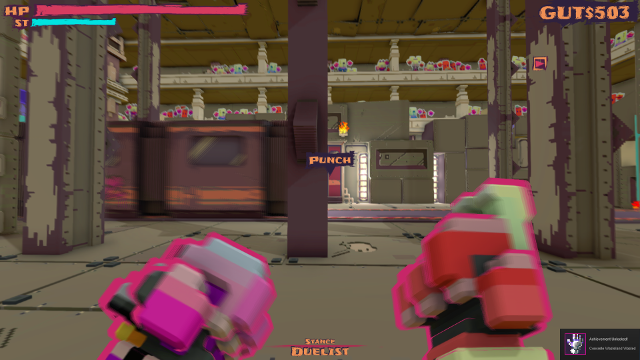 Wouldn’t it be interesting if that were the case?

I can’t wait to find out how far off the mark I am with this. It might take a while, since my first run ended two rooms in just now, with me failing to dodge out of a floor flamethrower trap after dodging into and burning all my stamina. You know, the sort of thing that an experienced fighter would totally do. But hey, practice makes perfect.