Much as the Steam store front page is slowly devolving into a Newgrounds-esque burning trash heap, it’s still occasionally possible to find cool games just by browsing. For instance, two weeks ago I found Mandragora Games‘s Freaky Awesome, a game that impressed itself on me (via trailers and screenshots) as ‘what if The Binding Of Isaac, but about weird ooze mutations instead of dead babies and poop’. Which… I dunno, that seems like a kind of game I could see myself enjoying, if I gave it a shot.

And here we are!

Freaky Awesome‘s title screen is a monster. Like, literally, a pustulating green monster with the red O of ‘awesome’ for an eye. It roars a welcome, and the menu options are contained between its ooze-dripping teeth. 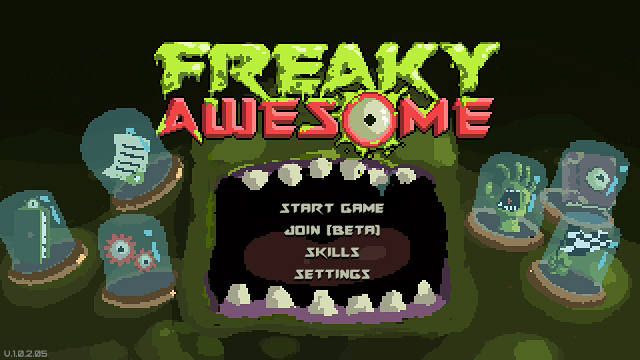 If you assume this scene would be accompanied by shredding electro-punk beats, you’re *entirely correct*.

I browse the possibilities. Options are as options do for a game like this: Not too much in the way of fancy graphics, but it’s got all the audio settings and rebindable control profiles you’ll need. More, even, I think there’s like four or five of those. I can look at several mostly-hidden skill trees, and a ‘library’ of ‘items’ and ‘mutations’ that I’m sure is going to raise more questions than it answers. And Freaky Awesome even proudly announces a beta version of its multiplayer functionality — which I’m not gonna get into at all, but hey, be proud of your accomplishments, game. Live your best life. 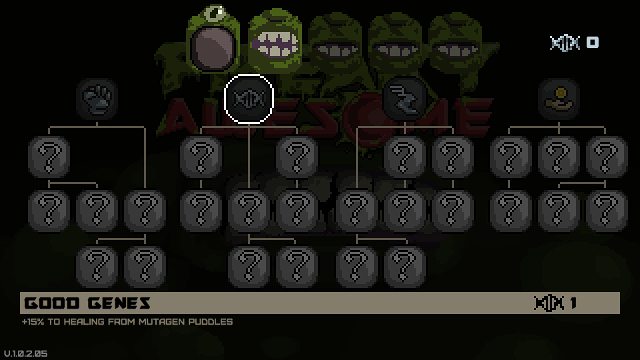 This looks like it might be fun to get into! Once I understand what any of it means.

In fact, Freaky Awesome is so proud of having multiplayer, if you hit the ‘Start Game’ option it hits you with the possibility again. ‘Do you want to Host Online? It’s just in Beta, but you can if you want to. Or you can Play Offline, I guess.’ It will do this every single time I start a new run, which seems like a bad UI approach. But right now I don’t know about that yet. All I know right now is that I can select Normal, Hard, or Insane difficulties, and then… 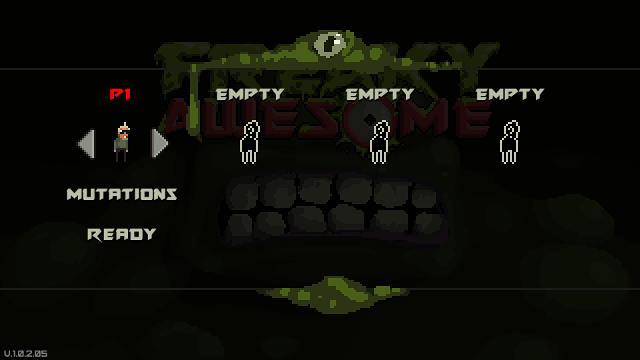 Christ’s sake, I get it. You want me to play with friends! Get off my case, DAD!

I can select my player character here, but in a surprise twist, they’re all the same Cool Dude that was plastered all over the trailers. Just in different colour schemes. Clicking ‘Mutations’ shows me three weird monsters, with arrows suggesting I can browse between things — except nothing happens when I do, right now. Might be one of those later-game options I keep hearing about. 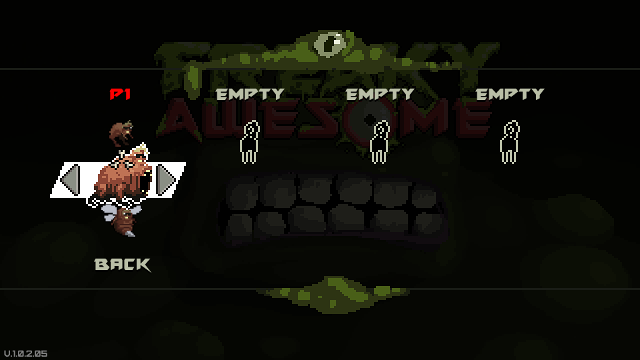 Probably a coincidence that all these monsters kind of look like my Cool Dude character a little bit.

Alright then, let’s get started. I watch a brief confusing cutscene that involves some goop and an eye, and then… 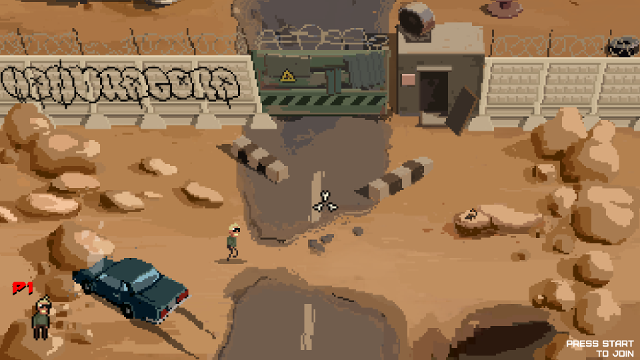 Scene: A dilapidated military base. Mood: I think I just crashed my car. Understanding of the setting: Zero point nil.

Now, I know what you’re wondering. “Jarenth, can I learn how to control Freaky Awesome before having even a literal second to take in its start?” Reader, I’ve got you covered. 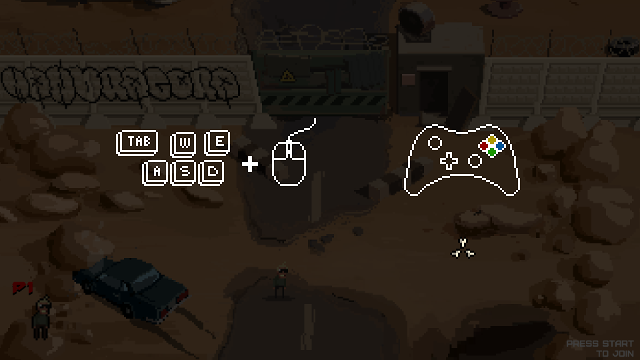 Those images should honestly be in the reverse order, because it actually immediately starts like this.

I’m going to break Indie Wonderland character for a moment here and do a little time skip. See, the first time you play Freaky Awesome, it starts off like this — presenting itself as a sort of isometric 2D adventure game. You walk around, find some passages, drive a car, things happen. But the actual real game doesn’t start until you jump into a sewer drain, and end up here: 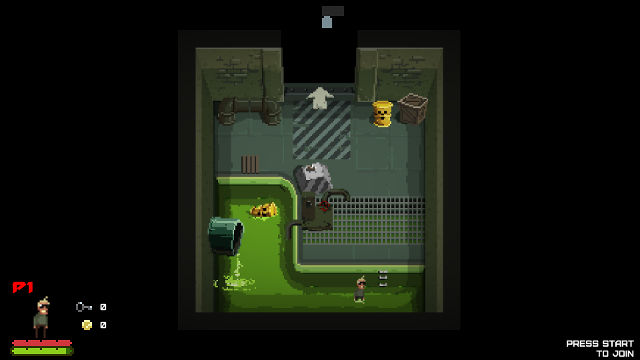 The game will actually start from here directly on future runs. But I don’t know about that yet. In that light, I do actually enjoy this little vignette, which does a decent enough job of setting ‘the scene’ without overplaying itself by being repeated forever.

I walk around the ooze pool I landed in and climb out quickly, wary of the effects. But it’s too late: No sooner do I step out than my character horribly mutates! For a few seconds all I see is a swirling mess of flesh, and limbs being formed and reformed. And also… 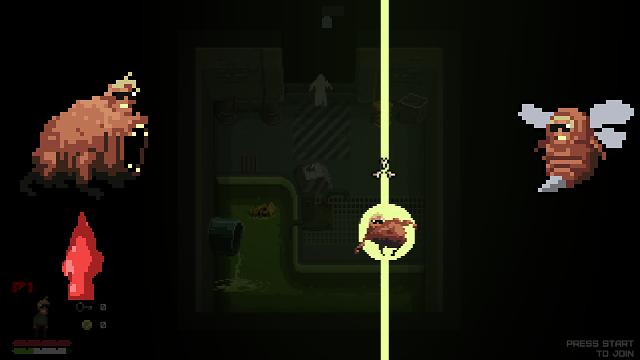 This screen suggests action, yeah? But when I move my mouse around and click in places, nothing happens. I will learn later that Freaky Awesome‘s mouse controls are, let’s say less than stellar, and I should actually have used A and D to pick one of these two options. As it stands, I have three seconds of confused exploration before the game chooses for me. It chooses the weird four-legged form on the left.

And now I am that thing. 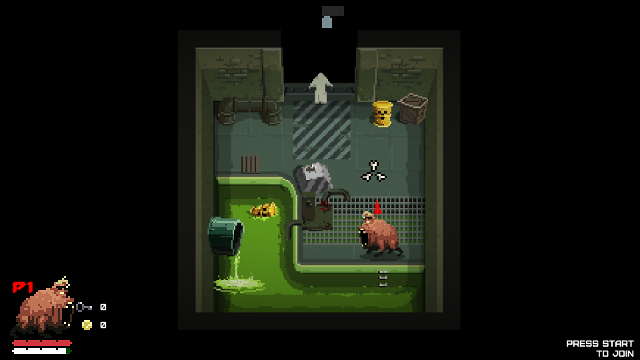 I mess around with the afore-explained controls. WASD walks around, same as the earlier Factory Adventure. Then I press the left mouse button, and my walking mouth monster shoots its tiny head forward on a thin string of flesh, before snapping it back with a wet plop. It’s… more unsettling than it sounds. 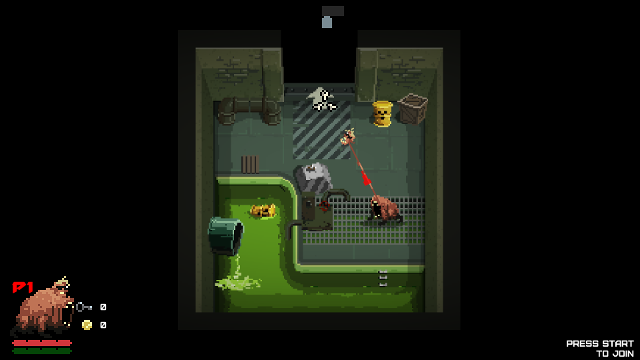 Then I press the right mouse button, and my monster lays an egg. It hatches in a few seconds, and spawns a tiny worm with a tiny version of my action mullet, which does nothing for a fraction of a second and then immediately dies. I don’t know how to parse any of this, so I choose not to.

There’s one exit in this horrible nuclear garbage room, so I walk up north. The room beyond it is larger, and much more filled with nuclear garbage. As well as concrete blocks, red and brown crates, and spikes that pop up and down from the floor regularly. What the hell kind of facility is this?

Suddenly, a horrible green ooze beast falls from the ceiling and undulates towards me. I start hitting it with my own extended head, hoping to kill it before it gets any closer. 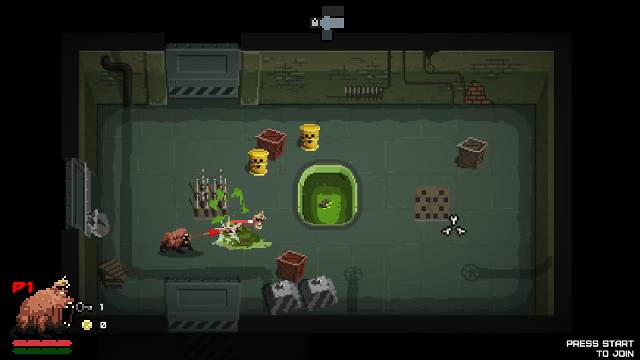 You’d be surprised how effective this is.

As the ooze monster splatters into bit, a second ooze monster appears, as well as rotund brown creature. As I wail on the former, the latter waddles down until it’s on my horizontal axis, then barfs forth a long stream of brown goop. I retaliate with frantic head-shooting, which hits both the monster and one of the red crates — popping it open to reveal a stack of dynamite bars, all with lit fuses! The whole situation explodes almost immediately, hurting me significantly but hurting the monster enough to kill it. Which causes it to explode as well, because that’s just what we’re doing now, I guess. 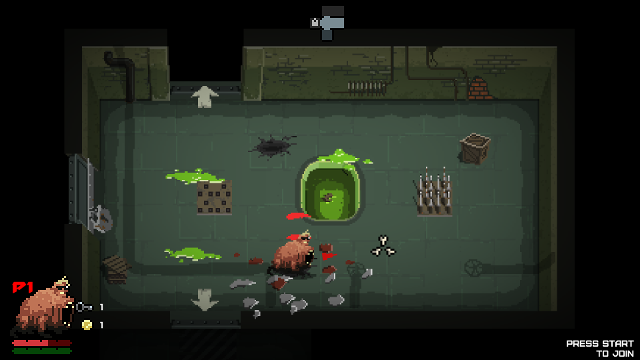 This is going to be one *hell* of a diary entry.

Bad news: I’m pretty badly hurt. Good news: I find out that I absorb the piles of green goo the monsters left behind by walking over them, healing myself in the process. Ambiguous news: Absorbing goo also fills the green bar underneath my red health bar. I… don’t know what this does? Probably nothing sinister.

Another bit of probably-good news is that the monsters I killed and the boxes and concrete blocks I blew up dropped items: One coin and two keys. And hey, one of the two doors exiting this room (not counting the one I came in through) is locked! Let me just rub myself up against that door and… Yup, there we go. Wonder what’s behind locked door number one. 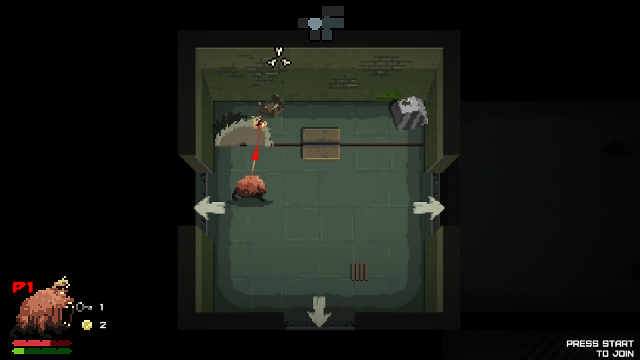 Not quite the *reward* I expected, I’ll be frank. 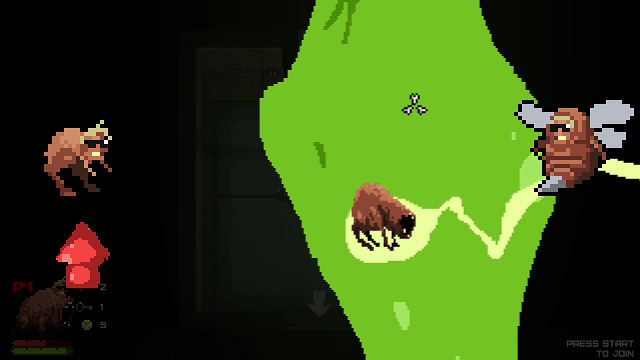 Suddenly and WITHOUT WARNING

I am now a giant wasp.

Ah, okay, I see how this is going. Pick up enough goo, mutate into a different form. I don’t think this one’s specifically better than the previous one, though — I’m pretty sure I could have picked this form from the start. But hey, whatever. In giant wasp form I can shoot out my stinger, for a true ranged attack. I can also plunge my stinger into the ground, and fly around defenseless for a few seconds, after which I… die. And respawn where the stinger was. 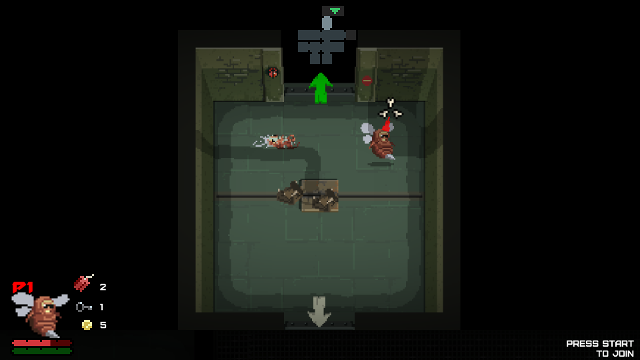 And then I get to look at my own dead body for a while.

As a wasp, I explore the rest of the level. I expect a boss fight at the end, but instead what I find is a giant cargo elevator. Which is one way to travel, I guess. Less of a level climax, but you do you.

Between levels, the elevator ‘loading screen’ quickly shows me all the items I missed on this floor. It then tallies some sort of score, which is visualized by a ton of green goo pouring over my character in a test tube. After which…

Okay, so what happens is I’m prompted to pick one of three forms. I pick the chicken-shaped one, because I’m curious. I’m then prompted to select one of four upgrades for that form. Better rolls, longer rolls, spikes here, spines there. I’d like to undo my chicken selection and pick a different option, but clicking the back button doesn’t do anything — I’ll learn later that, again, I should have used the WASD keys to navigate here, but right now I don’t know about that yet. So I pick the option that promises spikes, a second animation plays out, and then I’m back in the game. Second floor, same as before.

New and interesting things happen on this floor. I morph into a third form, the aforementioned chicken, which I think didn’t have giant spikes before but sure does have them now. I find a store, where I can use my coins to buy one-shot items, health refills, and ‘DNA’, which I think I’ve seen on the Skills menu earlier. And at one point, I discover that Freaky Awesome doesn’t have a boss fight on the first floor, but there’s definitely one on the second floor. 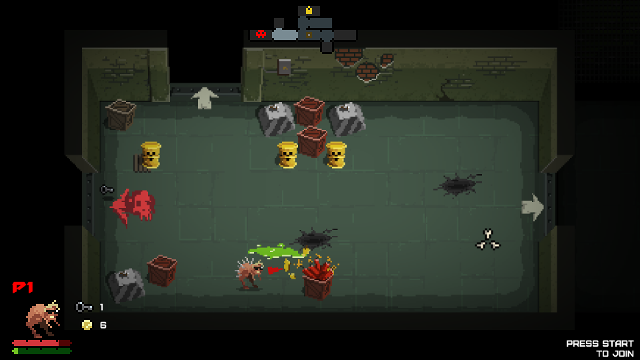 Ask me how I know this.

Now, do I immediately win this boss fight? No. It turns out that giant stinger-firing monster mutant wasps can be challenging to defeat. 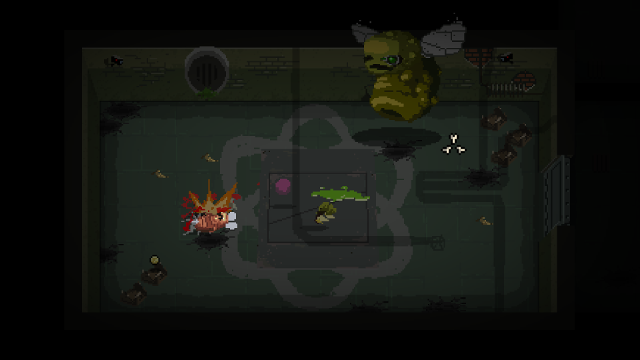 Particularly when it summons backup, and hits like a truck, and also I don’t quite know what I’m doing.

And just like that, run’s over. Back to the main menu with ye. Thanks for playing.

Do I gain anything from this run? I don’t think so. I may have ‘unlocked’ some items, but can’t parse if the messages I got were of the ‘this new thing now exists’ variety or the ‘you encountered this existing thing for the first time ever’ variety. I definitely didn’t get the money to buy any DNA from the store, so no upgrades there either. I gained some knowledge, I guess? And valuable life experience?

Am I going to try again? Definitely yes. Starter-level giant wasps will not be the death of me. And this game seems pretty interesting to me, and I want to see where it goes, but I’ll be frank: A good 80% of my drive right now is revenge.

Check back in after I dug two graves!