Monomi Park‘s Slime Rancher has been in the periphery of my awareness for a while now. I remember it being announced. I remember several of my friends jumping on the first Early Access opportunity, talking about wrangling slimes there was to do back in those times. I remember thinking it looked cute, and possibly fun, and as such I would probably want to wait with actually playing it until post-Early Access. And, me being me, I remember buying it only a few weeks back, way after the full release had gone out, and then immediately forgetting to actually launch it for way too long — the one thing I didn’t remember.

I a priori expect only two things from Slime Rancher: A nice colourful atmosphere, and cute bouncing slimes with dopey little smiley faces. The title screen immediately and completely delivers on those expectations. 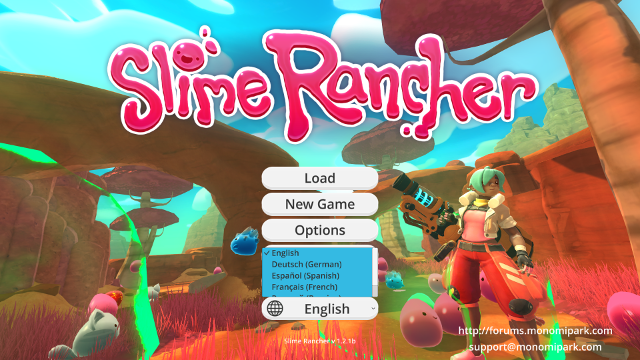 Having the language select option be outside of the Options is a good design stroke — takes the responsibility of finding that option off the shoulders of players that might not be skilled enough in English to do so.

I poke around in the Options, as I do, finding them to have a fair range of settings: The most important graphical modifiers, standard audio settings, rebindable keys, and a second language setting for people who did immediately dive into the options. As a bonus, all of this is presented in a visually oddly pleasing menu, using pastel blues and pinks and yellows to set Slime Rancher‘s tone even as you might literally be setting its tone. Which is not actually a thing I think you can do in the menus, but, listen. 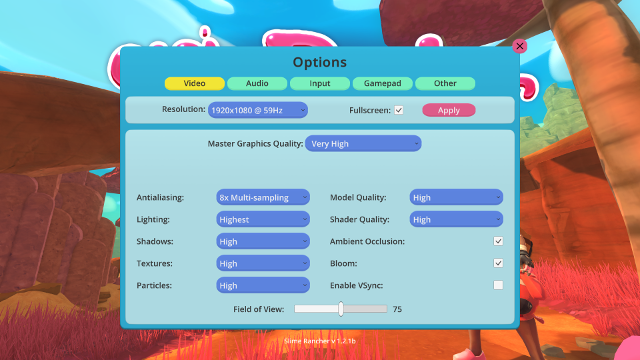 It’s not that these options by themselves are all that interesting, but I enjoy talking about them in reviews to give you an indication of what sort of level of care to expect. If a game goes this deep on accessible customization early on, I allow myself to be optimistic about the amount of care and design put into the later game proper as well.

Some worrying is done about which icon should represent my savegame. Should I be the pink slime, or the grey cat slime, or the chicken?… I eventually settle on a rocky blue slime with an unimpressed expression, for reasons that probably don’t suggest anything. And then we’re off! 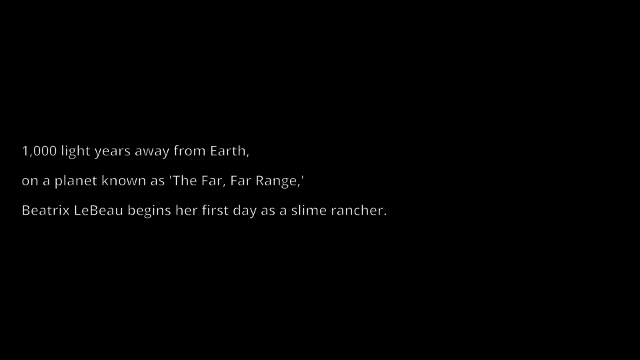 The black of the introduction fades, and I, Beatrix LeBeau, find myself staring at a western-style plot of land. I’m on a crickety-looking wooden porch, overseeing swirls of sand, rocks, some trees, and what appears to be a distant supercomputer. Also, I may or may not be holding some sort of future plasma cannon. Can’t wait to figure out what that’s all about. 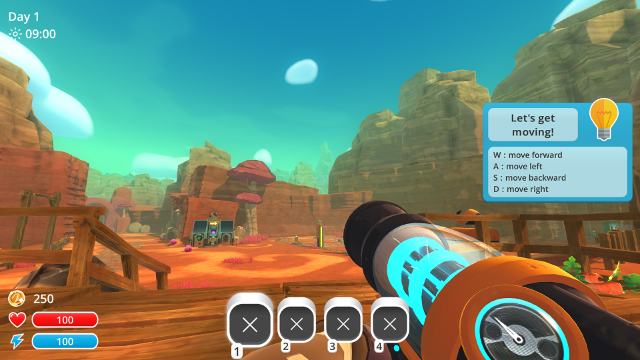 ‘I’m Beatrix, but my friends call me Samus.’

“Let’s get moving!” a tutorial prompt tells me, so I use WASD to move around, as first-person do. So far, so good. “Hop to it!” it yells, and I learn about using Spacebar to jump and Shift to run. “How to vac like a rancher” it offers, and after some parsing I learn that this means that my backpack is basically a portable vacuum. I can use the right mouse button to vac up some objects around the ranch, like (let’s say) these tasty carrots. And with the left mouse button I can fire them some distance away. 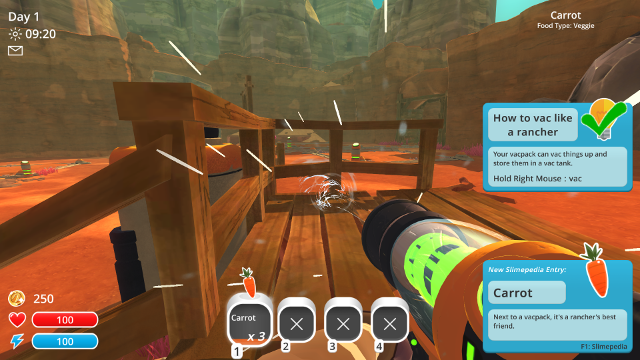 I can’t wait to read the Slimepedia and learn more about these… ‘carrots’.

Alright, what do I do next? The tutorial prompt disappears, and I stand around for five seconds. Which turn into ten, which turn into twenty. Is that… Was that it? Was that the tutorial? Slime Rancher, do you really feel you’ve taught me everything I need to know to play right now? 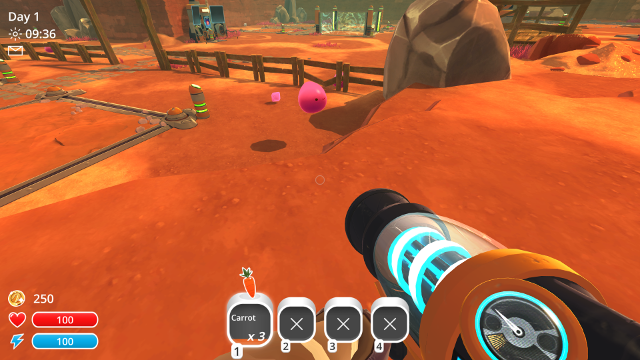 Naturally, I immediately vac it up. 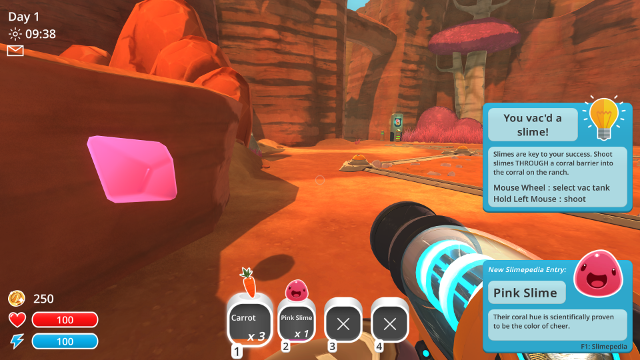 The tutorial pops back into view, informing me that the first step towards actually ranching slimes is to deposit them into the corral that’s currently on the ranch. Looks a little bit like a featureless box with glowing forcefield walls to me, but whatever: I can shoot the slime through on one side, and it bounces off the other side, before landing and resuming its happy hopping like nothing traumatic just happened. 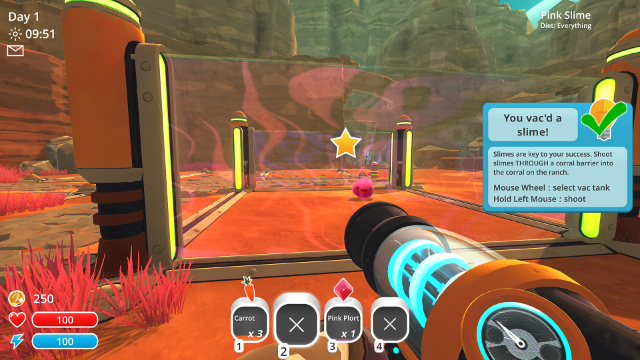 Except that its range of motion is a little more *limited* than before.

This slime is my responsibility now, I guess. Should I feed it? The earlier prompt did suggest that’s what carrots are for… I fire a carrot at the slime, and after recovering from being conked on the head by a high-speed carrot projectile — sorry! — it promptly gobbles it up. And then deposits… some sort of pink crystal. I vac it up, because you clean up after your pets, and Slime Rancher informs me this is a ‘slime plort’: Slimes produce these after being fed, and I can sell them at the ‘plort market’ to make money. 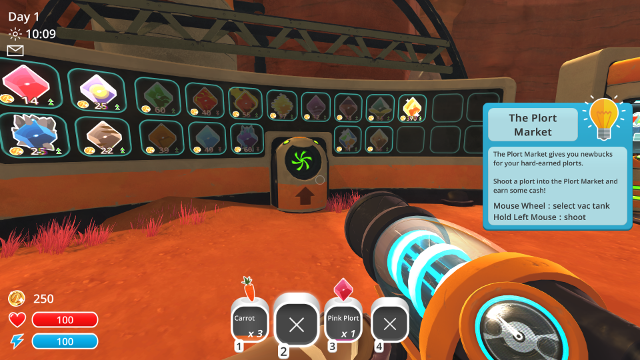 “That about covers the basics!” the tutorial happily tells me, and I still don’t really think it does. “Go out there and explore! The best way to become a pro rancher is to experiment!” What is there to experiment with?

I walk around the ranch, vacuuming up some other stray pink slimes and plopping them into the corral. There are several square plots of land close to the corral, bordered in featureless metal and adorned with a single-button stick. By interacting with these, I learn I can add new buildings to my ranch: More corrals, gardens, coops, and maybe an incinerator or two. If I want. A different console close to my house lets me upgrade my vacpac, with extra health, energy, and new abilities like ‘vacuum water’ and ‘fly’. And inside my house, I can read interstellar email. Or sleep. 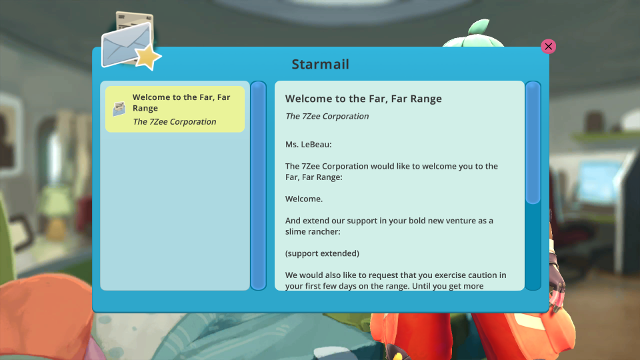 My first email is spam that doubles as worldbuilding. Efficient, that.

I have no idea what I’m doing, but, I do have some money to my name, and I know that I can make more money by selling slime ‘plorts’, which are generated by feeding them. So… I use most of my remaining money to build a garden plot, which I keep mentally referring to as a ‘farm’. This turns the bordered-off ground dirty and brown, and adds a new, open-mouth-looking pillar to the side. At the urging of the tutorial I shoot a carrot into the mouth, and now I’ve got a carrot farm! Eventually. It’ll take some time to grow.

I use my new free time to explore more of the ranch. To the west of my house is a passageway between mountainous rocks, blocked off by a red forcefield. I could buy access to this ‘Overgrowth’ for about 1800 bucks, which seems like an inconceivably large amount of money right now. To the east, a path down into a grotto called The Grotto is similarly priced. To the south, there’s a big ocean, which…

I decide to experiment by jumping into the ocean. This knocks me the hell out, before depositing me back at my house… 6 AM the next day. All the items in my inventory are gone.

Worse, my pink slimes are running amok! They’re bouncing and squeaking and jumping over the corral wall. If it were up to Slime Rancher‘s explanations, I’d have no idea what was happening. But I do remember reading about this from other friends that played: Slimes that get hungry — from, say, not getting any food for twelve hours since the rancher nearly drowned — don’t get hurt or die or anything, but they get increasingly agitated. The little guys are just looking for food! Which explains why two of them are currently bouncing towards my carrot farm, which has bloomed in my absence. 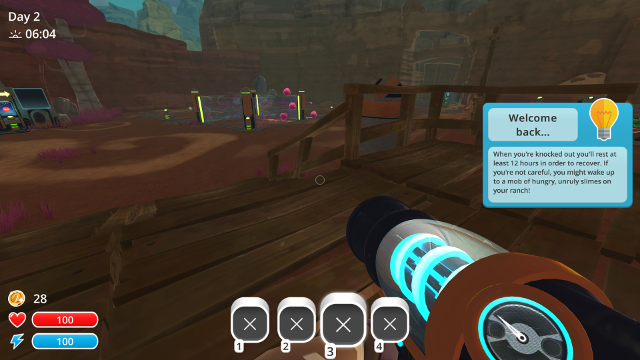 Thanks for the tip, tutorial. Would’ve been even better if you’d connected this to feeding in any overt way, but, whatever.

After recapturing the escaped slimes and dropping most of my carrots in their bin, I go the only remaining direction, north. This looks to be an actual paved path out of the ranch, and probably what I was expected to do right off the bat. But then that’s not how experimenting works, is it?

The area right outside my ranch is called the Dry Reef. It’s got carrots galore! And bright red pogo fruits! And pink slimes, so many of them! I vac up everything I can find; we’ll see if I can actually afford to keep these slimes around or not later.

I also spot a strange… glowing yellow H, is really the only way to describe it. Jumping up and interacting with it reveals it to be a note from ‘Hobson Twillgers’, the previous owner of this ranch. Supposedly the person who built the house and the two supercomputers and nothing else. They reveal that they’ve left several of these glowing-H notes around the land, ‘to guide me on one last tour of the land they love’. 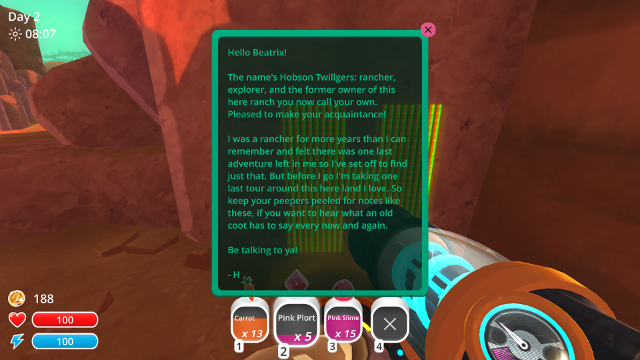 I return with my slimes, deposit them with their brethren, and feed them the carrots and almost all the fruit I found. I sell the resultant plorts, and use the money to plant a second garden, wherein I plant my last pogo fruit into a big tree. That’s planning ahead for ya! I then return to the Dry Reef, and walk even farther than I did before — which is to say, easily ten seconds away from my ranch instead of five…

Gasp and surprise! A different slime! My save icon slime! 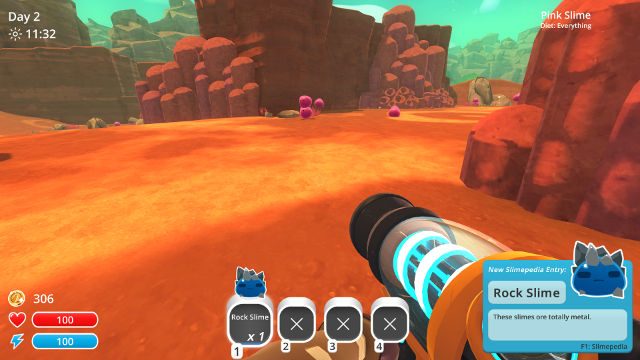 Look at this unimpressed little buddy!

I hurry and bring the rock slime back to my ranch, to put it with its pink slime friends. The corral starts feeling full at this point, so I build a second one, and drop rockie and a few pinkies in there. Then I feed them — while the pink slimes eat everything, rock slimes apparently only eat vegetables, but then I do have a big carrot farm right nearby.

The rock slime eats a carrot and plops out a spiky blue plort. I move to get it, but before I can, one of the pink slimes gobbles it up. And… 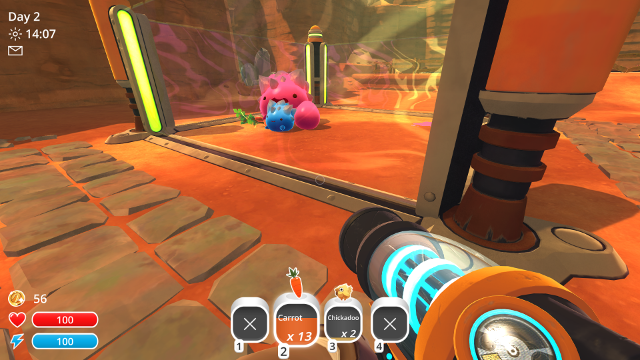 Alright, I take back some of my earlier criticism. I’m actually pretty okay with finding out… whatever this is through self-driven experimentation.

A quick study of the Slimepedia learns that these large slimes are called ‘largos’. They’re made when slimes eat plorts of other slimes, and the resultant Big Lad has all the properties and preferences of both — and produces plorts of both types when fed. Score! They are more difficult to transport, since they can’t be vac’d completely and instead have to be carried one at a time. And there’s something about largos transforming into ‘horrible, all-consuming tarr monsters’ if you feed them after midnight or whatever — I didn’t super read that part, it didn’t seem important.

What does seem important right now is that I explore Slime Rancher more! It’s starting to look more and more like there’s a lot of cool stuff to explore here. Slime types, new foods, whole new worlds, upgrades, buildings, story notes… I might be okay with this for a while, I think.

Check back in with you once I beat the entire game! Or whenever I feel I have something to say, either way works.