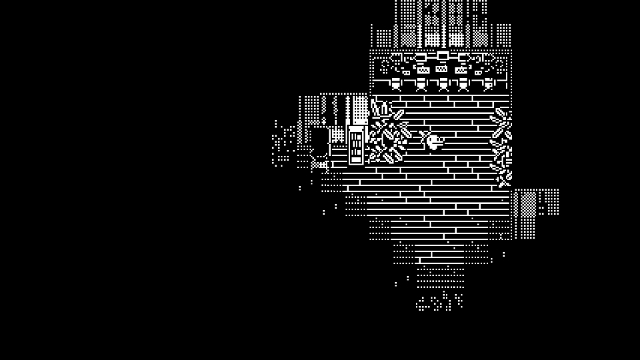 As I’m sure you can tell from this screen, I did it.

Well, that was interesting, all in all. I laughed, I cried, I lived my life a quarter mile at a time. I also fought an evil cooperation of sorts, I guess? I was none too clear on all that. But I definitely enacted some meaningful outcomes, and it only took… a few minutes. 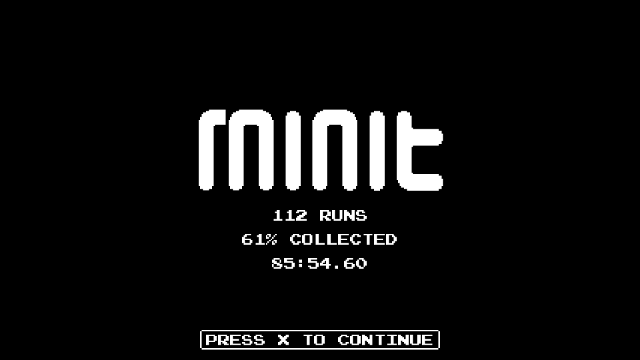 This many minutes, to be exact.

So let’s talk about Minit.

As the start, I’ll offer a caveat: There will be people who look at Minit and find themselves immediately turned off by the pervasive time limit. I personally know people who hate this sort of restriction, and just the presence of a clock can be enough to make them not want to play. I’m opening this Minit review by saying: This is valid. Despite my own feelings on the game, it’s not my place or intent to convince you otherwise here. If you think in your heart of hearts that the presence of a constant time limit will in whatever way stop you from enjoying Minit, be it functionally or emotionally or any other reason whatsoever, it probably will.

I also personally think Minit‘s time limit is one of the smartest examples of using hard play constraints to inform and shape design that I’ve seen in a while.

On an initial look, Minit will probably come across as your Zelda-style top-down combat adventure. You basically explore the world, find new tools and hidden secrets, and expand your play possibilities over the course of several lives, or ‘runs’, which can last up to sixty seconds before killing you dead and respawning you at your house. You do this with the intent of… achieving something or other. Despite finishing the game, I’m still not sure what I actually did: Minit is a game with very little explicit player guidance, both narratively and mechanically. I’m not playing anything up when I say that I generally had no clear idea why I was doing anything, or if there was anything I was ‘supposed’ to be doing. In combination with the strict time limit, it’s easy to worry that this could get pretty frustrating pretty fast.

But here’s the thing: This time limit isn’t ‘just’ a limit. It serves as a functional delimiter of your play possibility space. While you might not always know what you’re supposed to be doing or where you’re supposed to be going, especially early on, you do always know one thing: Whatever you’re trying to figure out has to be reachable and actionable within one minute of your spawning spot. Whatever you have to do can’t be too far and too complicated at the same time. It can’t involve actions that don’t immediately pay off in some visually clear way. And by and large the world state returns to the same original when you die and respawn: There’s almost no case of ‘oh, this time around, this part of the map is suddenly different in some way’ — the one time I can remember this happening, it was clearly signposted by a nearly unmissable NPC. 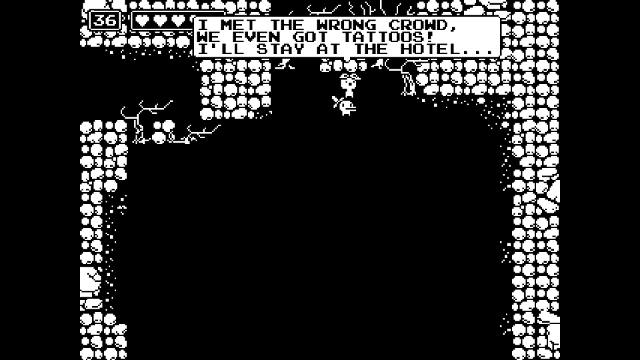 Don’t worry too much about this tattoo guy.

What Minit demands of you is not quick reflexes, or perfect racing lines (mostly), but careful environmental exploration. Your sixty seconds of life spell out a play space within you are by definition able to reliably explore and solve puzzles — given that you actually understand your moment-to-moment goal, which you can do by working out which aspects of the world are puzzles and parsing them, and by talking to NPCs, who often either hint at subsequent objectives or outright give you quests. The rewards of that exploration come in the form of new tools that open yet new play options, as well as new hearts (that let you survive more damage and play more dangerously) and coins (which are their whole own thing). Bit by bit, puzzle by puzzle and challenge by challenge, you master the space available to you. 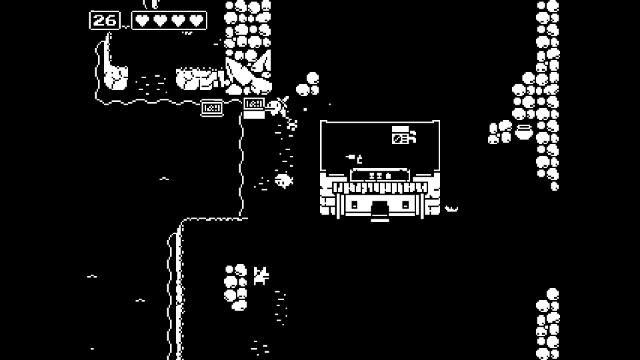 COFFEE OPENS THE WAY TO GLORY

And then, just as you think you’ve seen it all, you find a new house. Suddenly you can change your spawn point. 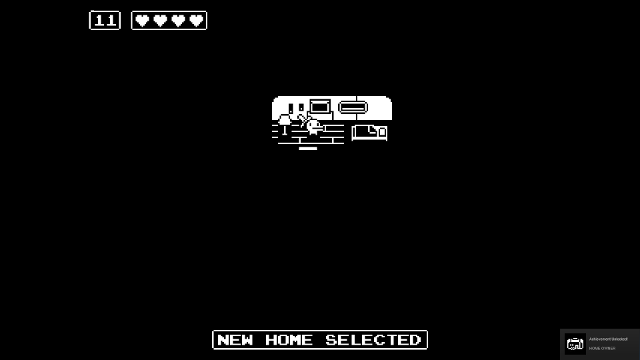 There are… five houses in total you can use, I think, of which three are ‘core’ houses that you can’t really miss if you want to beat the game. And each of them significantly increases the practical size of the world. I’m tempted to link the three core houses to three ‘areas’ of the map, since each has its own visual theme and, more importantly, its own rad electro-soundtrack, immediately setting (say) the forest audiovisually apart from the desert. But more than different areas, the environments in Minit feel like they’re all part of one single interconnected world that increasingly gets larger for you. To me, the houses were really nothing more than clock-reset spots — I’d run into one, and on the audiovisual ‘house selected’ cue immediately hammer the respawn button, regardless of how much time I had left. Blarf, I die, then live again, saving me like twenty seconds of waiting for the inevitable. 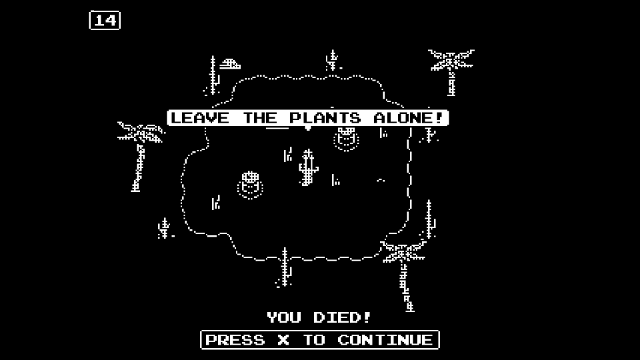 I don’t have TIME to WAIT to DIE! I’m a busy specter! 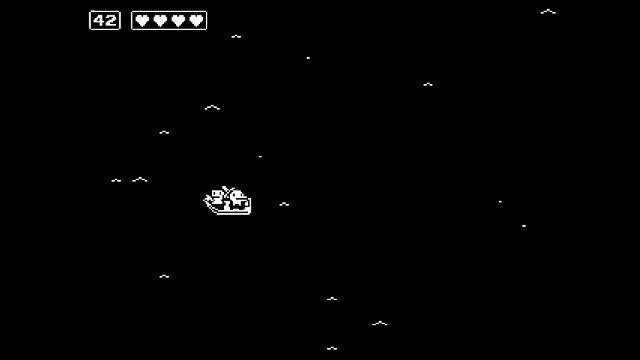 Like, five squiggles is all it takes to get across what type of terrain this is.

But then, ‘a masterclass in minimalist design’ is a pretty succinct summary of Minit as a whole. It does so much with so little. The mechanics are limited, the palette is limited, the possibility space is sharply limited. And then of course there’s your time. And yet, there’s so much to it.

The game does become a little more unwieldy as more spawn places become available, just as a consequence of its design — the functional space delimited by time now overlaps with the starting space delimited by your houses. Combined with the still very much limited player guidance, later gameplay can become a bit of a ‘rub your face into everything’ hunt. Especially since there are secrets, tons of ’em, and some of the secrets are of the ‘this identical-looking wall actually isn’t variety. Clearing the game proper is still generally a matter of exploring all the spaces you haven’t fully explored yet, and doing the things the NPCs tell you to do until they stop telling you to do things. Yes, even that one NPC. I know they can get annoying. 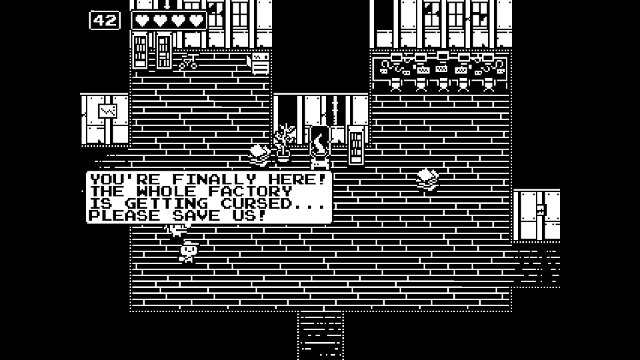 Listen: I’m trying very hard. But it would help a lot if you could tell me WHAT THIS ACTUALLY MEANS.

But confusion and uncertainty still persist. This isn’t just me talking theory: I had a handful of runs in my first playthrough where I just had no idea what I was supposed to be doing, leading to a lot of backtracking for no reason and walking across functionally cleared screens while my interest slowly sapped. Letting players flounder without guidance is probably Minit‘s largest design flaw — though I hasten to add it’s still not a major flaw. I think I’ve seen the mailman show up in one or two areas where players are liable to get ‘stuck’, to help them get back on track? That’s what it looked like. It’s still a flaw worth mentioning. But all the same, it’s in no way an experience-defining feature: When I think of Minit, I think of discovering cool secrets, working my way through wastelands and factories and endless deserts, stabbing crabs and snakes while listening to great music, and finding glorious hearts — all before dying ignominiously and waking up again. Over and over and over, until such a point that I didn’t. 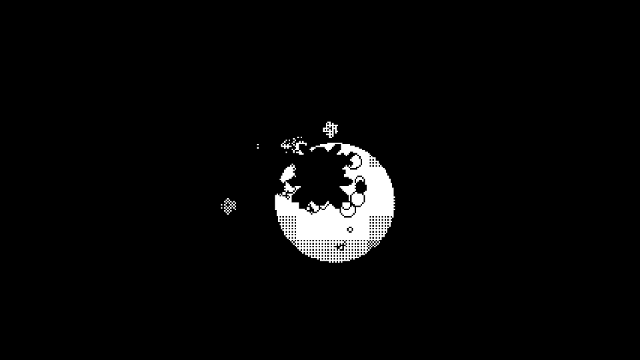 But we don’t talk about that part.

Minit is a particular experience that isn’t for everyone. But it is for a lot of us, and it definitely was for me. I’d play more of it if I could. Hell, I think I actually can. Hold on… 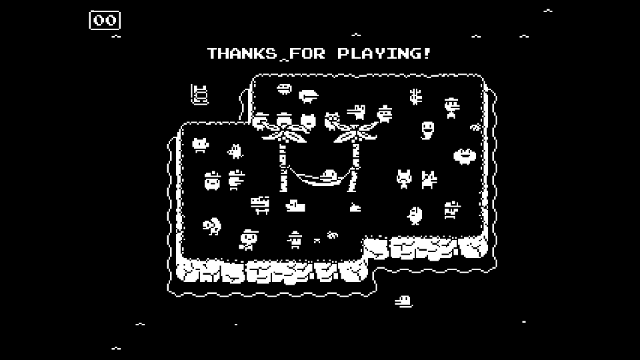 There’s really nothing about Minit that I haven’t already said. It’s well-designer, it’s clever, it’s audiovisually super interesting, and it works with its constraints instead of against them in a way that many AAA games ought to learn from. Again, I’ll say: If time limits aren’t your cup of tea, for whatever reason, it’s totally fair to decide to skip Minit on that basis alone. You know yourself better than I do. That said, if you’re on any kind of fence, maybe… take a quick look at some gameplay videos. Read additional reviews. And if you have a spare ten dollars, maybe consider supporting this super cool small-team game on Itch, GoG, or Steam?

Jarenth considered ending this review on a ‘it’ll only take a minute’ joke, but then decided against it. Celebrate his resolve him on Twitter or hang out with him on Steam. And if you dig Indie Wonderland and Ninja Blues in general, why not consider supporting our Patreon campaign?