You know how the equation of playing video games changes as you get older? I’m sure you’re familiar with the idea that there’s always a gap in the trinity of time, skill, and money: When you’re young, you’ve got time and you’ve got skill, but money limits your access to games. Get a little older, and money stops being an issue while skill still remains decent, but now all your time goes into — jobs, taxes, home ownership, whatever it is adults do. And get older still, into that mythical ‘retirement age’ that my generation will see, and you’re supposed to have time and money for days — but with your body’s upper skill limit slowly declining. I can’t really comment on the accuracy of all it, but as a man in his thirties, I can tell you that the number of hours in a day, and days in a week, and weeks in a month, no longer feels as daunting or as plentiful as it once did. I just don’t have the time into every new 40-hour release, alright! Sometimes I just want some games I can play between work, dinner, and whatever other plans I might have. Sometimes… all I have is a minute.

Now, I’m not saying that ‘JW, Kitty, Jukio, and Dom‘ had these exact constraints in mind when they made Minit, a game where progress is ostensibly measured in minute-long intervals. All I’m saying is that, for me? This might work out just fine.

Minit opens with a blast of triumphant audio and no colour at all. 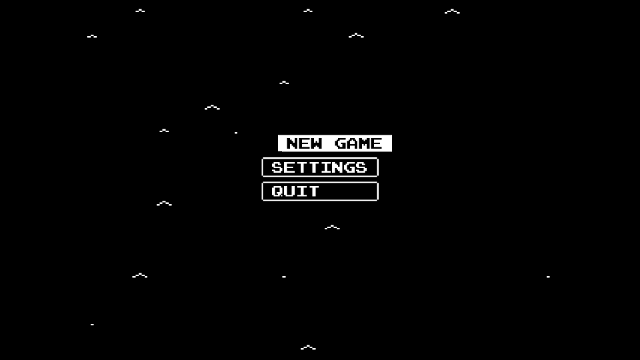 This, I will learn in a moment, is pretty indicative of Minit as a whole: Cool sound design, black-and-white aesthetic galore. But right now I don’t know about that yet. Right now I’m looking into Minit‘s settings menu, which is honestly reflective of that same design aesthetic: Options for sound, options for ‘light’ and ‘darkness’, and an optional vegan mode, apparently? 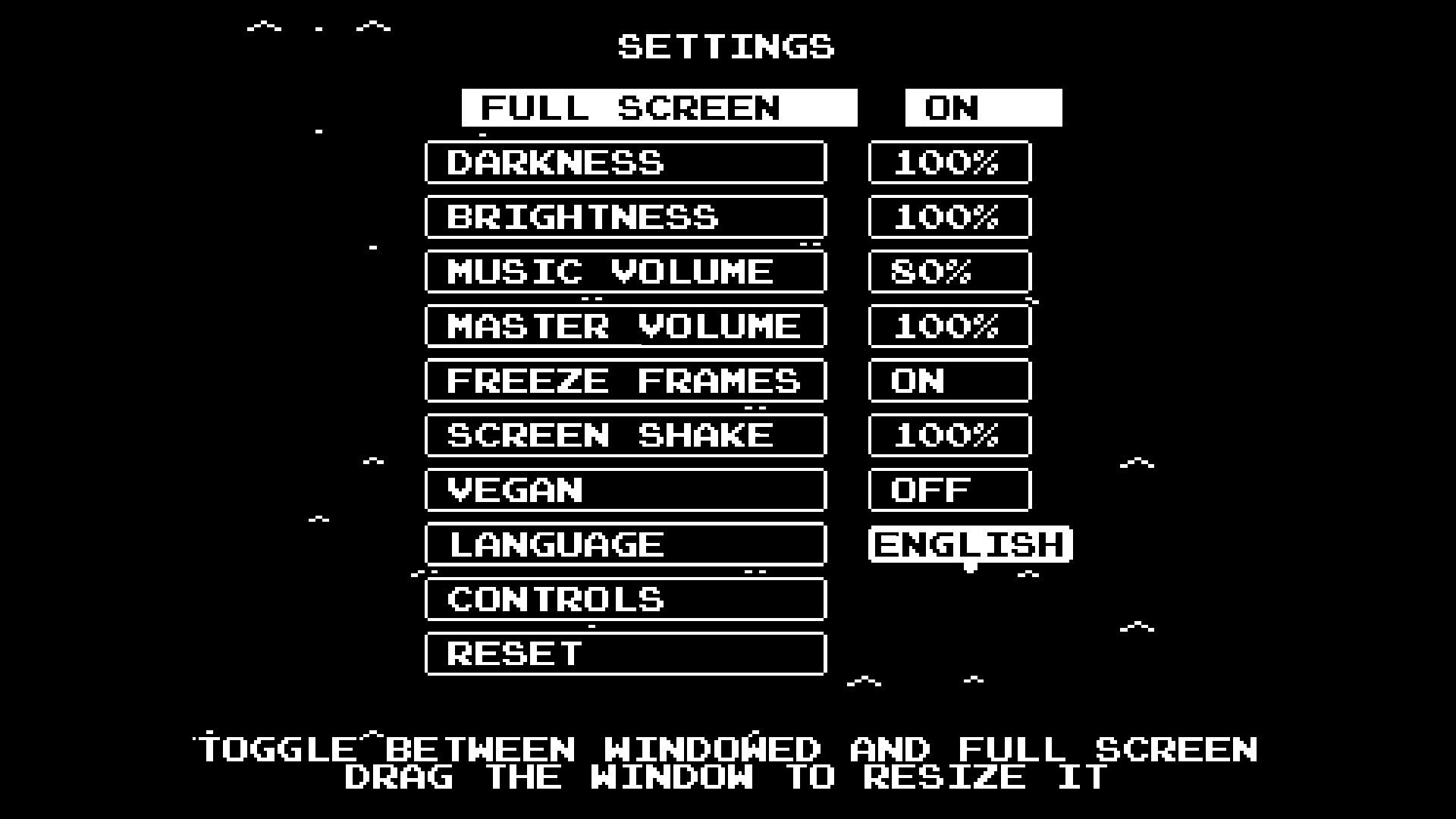 I’m giving it like… 80/20 odds on being a harmless joke setting versus it being some mean-spirited burn on vegans.

Up is up, down is down, left and right are left and right, and I need to remember that X, C, and P do various things. And… that’s it! It’s fitting, I suppose, that working through Minit‘s title menu took me all of forty seconds: The clock barely strikes the full sixty as I hit the start button, and my Minit adventure is thrown off immediately.

Right after I wake up. 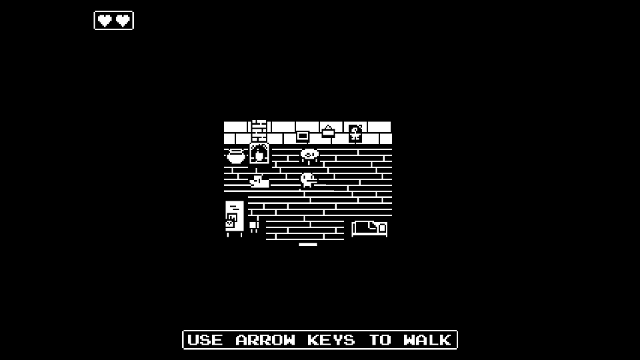 Alright, this is… what do we got? Cozy little house, nice black-and-white aesthetic. I’ve got a bed, a desk, a fireplace, and a dog. And in the center, some sort of… duck beak with legs? That responds when I hit the arrow keys? Ah, that’s, that’s me, then.

I walk around my little house. Cool, sure, but nothing’s… happening? I hit the buttons I was told should do things, but again, no dice. Maybe there’s something outside? 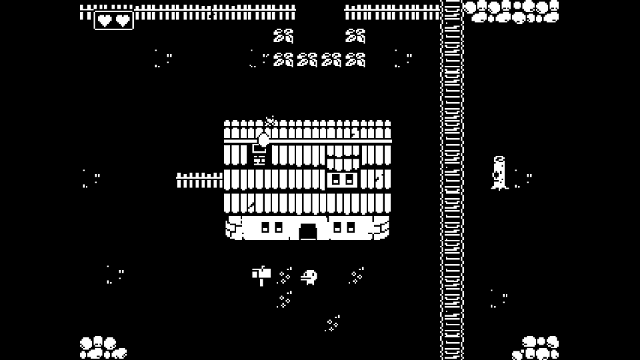 There’s *something* outside, that’s for sure.

I walk around outside my house for a bit. That ladder-looking shape to the right is actually easier to see as flowing water in motion: Probably a river, and not something I can cross. The leaves up top are impassible too. I can cross the edge of the screen to the left, into a little farm garden — except the only exit from that has leaves too. And down…

There are crabs on the beach! 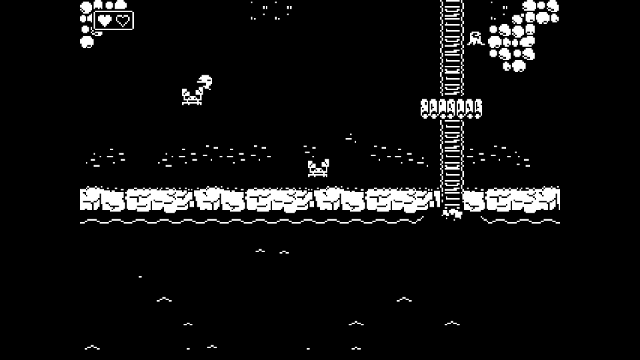 I touch one, and am subsequently hurt.

There are also two exits from the beach, so I go left. And — ooh, what’s this? 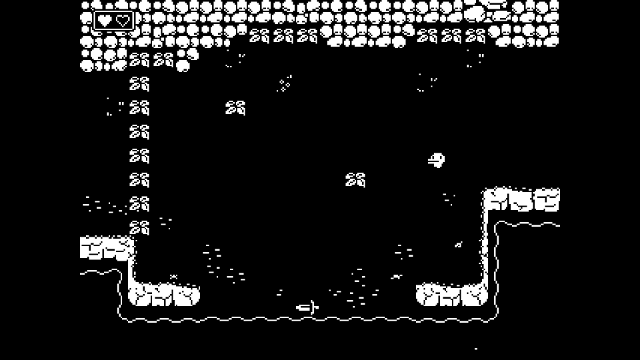 Don’t mind if I grab that sword indeed. 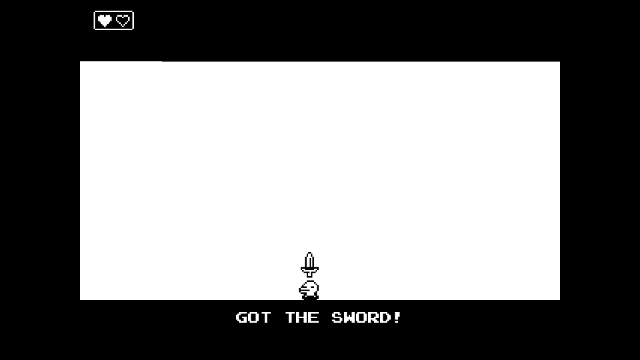 I pick up the sword. In the top left, next to my hearts — in the spot where my hearts were, actually, knocking them to the side – – a timer appears. Sixty seconds, then fifty-nine, fifty-eight, fifty-seven… Wait, what is this? What happened? What did I do? What do I do?

In panicked confusion, I run to the plants on the left and hit the X button, slashing them with the sword. Fifty-one. The area to the left has more beaches, included a beached rowboat. Forty-nine. I run up to the rowboat and stab it with my sword, breaking it in half. Forty-two. 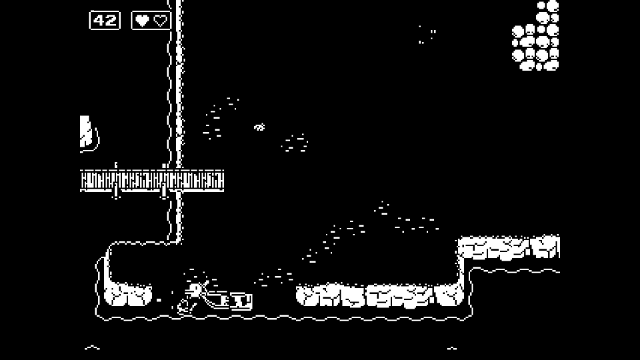 I run across the pier to an island with a lighthouse, where also stands an old person — I assume they’re supposed to be old because of the hunched, relaxed posture. And also, because they T A L K S L O W L Y. It takes them four actual seconds to say hello, thirty-eight. C’mon, c’mon, c’mon. Don’t my buttons do anything? I probably shouldn’t stab this guy with my sword. And P just pauses the world, that doesn’t help. Maybe C wi-

I hit the C button and die, instantly. 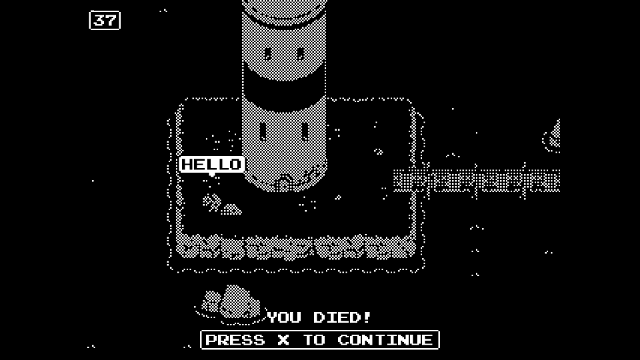 It’s like this ‘do this thing to die instantly’ posts, except actually in the game.

I wake up in bed, again. Except this time I have the sword immediately, as well as its assorted timer. No sooner do I open my eyes than its starts up again: Sixty, fifty-nine, fifty-eight, fifty-seven…

I try to retrace my steps. Maybe I can put the sword back?… No such luck, but I do meet a handy postal worker, who tells me that a) this sword is cursed, no shit, and b) I should drop it off at ‘the factory’ ASAP. Whatever ‘the factory’ is, or where I might find it, they’re suspiciously quiet about.

Going north from the beach, or west from my house (now that I can clear the plant blocking the way) brings me to a little cafe. The cat person inside complains about bad music, while the crocodile person behind the bar complains about crabs. I don’t know if I can help with the former, but I can help with the latter: I’ve got this sword, after all. All I have to do is hunt down five crabs on this beach, an- Oh, my time ran out, and I died where I stood. 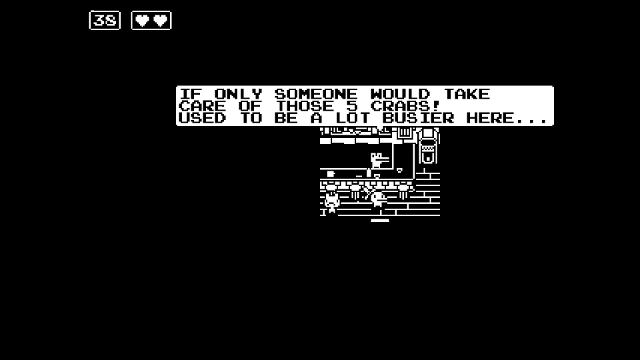 Just point me to the damn crabs already! I’m in a rush!

I’ve got a minute to live and no time to waste.

It takes me most of the next life to work out where all the crabs are, and another one to plot a good way to get to all of them inside a minute. But manage it I do, and on life number… I think we’re at five right now, I slay all five crabs. Then die before I get to the bar. Life six is spent learning that this did not count, and subsequently life eight is spent in service of a second crab-o-cide. But when I finally do get there and back again in the same minute… 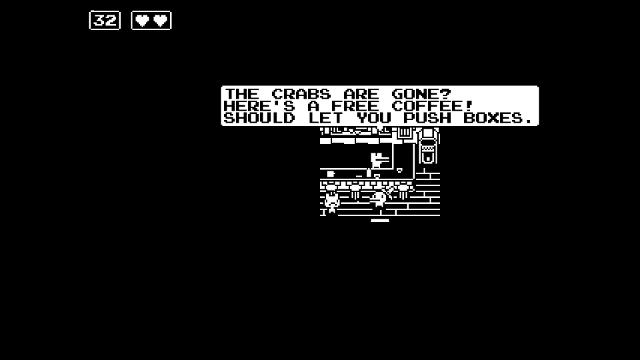 A cup of coffee is achieved!

Good news! This incredible cup of coffee will let me push boxes, and I’m almost entirely convinced I know what ‘boxes’ are in the context of this game. Bad news! I’m already halfway through my current life, and in the time it’s taken me to type this sentence without remembering to hit the pause butto- Yeah, see, there I go.

But then, the best news of all: When I wake up again in my cat’s-final-life, the coffee is still there. 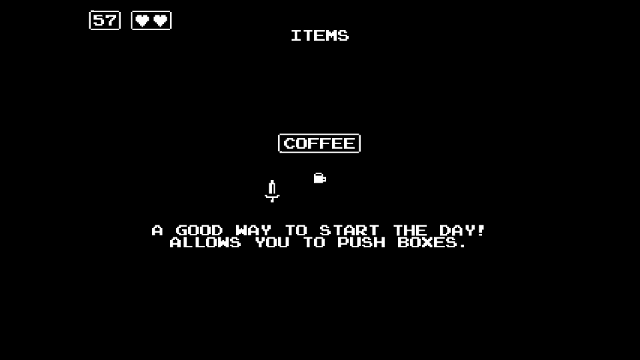 *Finally*, I can start my day right.

And just like that, the shape of Minit becomes clear. I only have a minute for every life, sure. But not every life starts equally. I couldn’t go anywhere without the sword, I could go some places with the sword, and now with this coffee, I can go other places still. My world is limited by what I can reach within one minute, but what I can reach within one minute is going to grow more and more expansive.

Assuming I can figure out where to go next, that is. What does pushing boxes allow me to access? 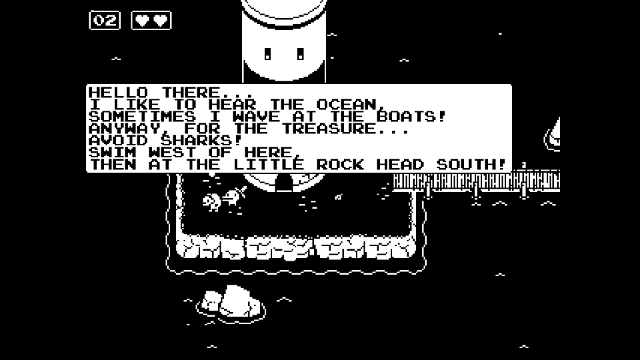 It’s not ‘finally be able to listen to the old man in full — turns out I had *that* power all along. All I needed was to hoof it a little faster.

Let’s make figuring that out my challenge for the next minute. See you in sixty seconds!