Now we have tackled the core channel performance, let’s look at some of the questions YouTube Analytics is most geared to answer.

What were the most watched videos on my channel in 2017?

Fully half of this list are not videos from 2017, those videos are intended to be very short, meaning that they hopefully have a much higher view count relative to the watch time. Even so we still see the impact of Torment: Tides of Numenera; especially the early access play through I was doing. Let’s see how it looks when sorted by views instead…

The list reshuffles a bit, but is still largely the same. What I find particularly interesting is the difference between Torment Thursdays 3-1 and Torment Thursdays 3-2. Less than half the views, but almost twice the average view duration. I suspect significantly more people who finished the first video also watched and finished the second, meaning that the first acted as a kind of filter.

What does the typical Ranneko Plays viewer look like? 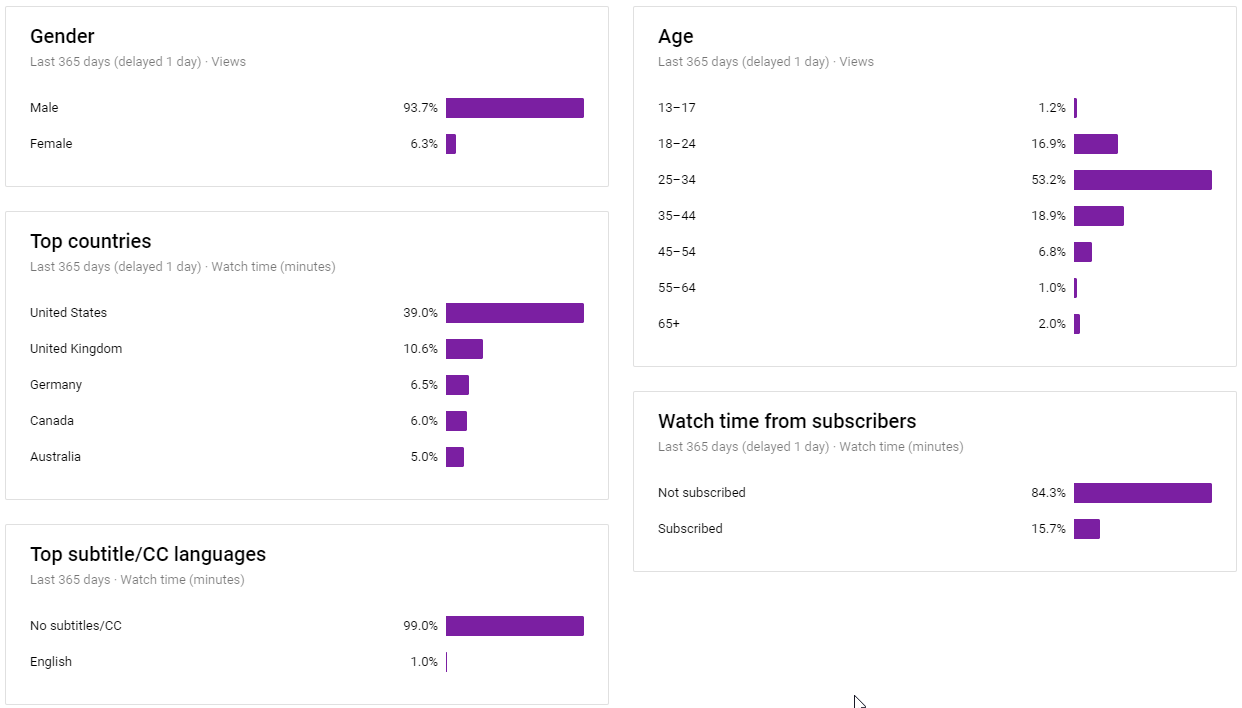 They are remarkably like me. English Speaker, male, late 20s/early 30s, and not subscribed to my channel. I would prefer a more diverse audience, but I do not know what actions to take. I’m honestly not sure how to even get started on that front, beyond maybe trying to get other people involved?

How did people find my videos?

It looks like traffic sources are evenly mixed between algorithmic suggested videos and playlists.  Unfortunately, these are opaque traffic sources. It doesn’t tell me how people found those playlists for example, and while there is a breakdown of top videos suggesting my content, the top source is literally Unknown, and the rest are my own videos. This implies that most of the 27% ultimately should be split among the other traffic source types, but at what ratio? Also, what does Browse Features even mean?

The YouTube search terms seem to bear out our previous assumptions regarding the source of most traffic for the year, people were interested in Torment: Tides of Numenera, and at least a 5th of the search traffic that found my videos were explicitly after content about that game.

The external traffic sources also fit, unfortunately YouTube no longer reveals information about the Google searches that lead to my channel, making that stat somewhat useless, but the reddit and doublefine.com sources would come from the relatively infrequent times I have posted my videos on there. The few times I have actively posted my videos have resulted in positive responses, but I remain cautious. The last thing I want is to be branded a spammer after all.

How much money did you make?

How much did this negligible amount of traffic pull in during 2017?

As far as things go, not too bad, I actually reached the $100 AU threshold in my adsense account for a payment. Which means that for the first time since I started my YouTube channel I actually earned something from YouTube. Unfortunately, since then, YouTube have decided that it is too risky to allow tiny channels to monetise, which means I need to get roughly 8x my current number of subscribers and 4x the watch time before ads can run on my videos again. Good thing there is that Ninja Blues Patreon I guess.

Was it worth it?

In terms of views and engagement? Hell no. This post has been pretty uncomfortable to write, which is probably why it has released in mid-March rather than the early January post I intended.

As was obvious from one of the first charts in this post, my channel is actually worse off now than it was at the beginning of the 2017. I know things aren’t working, but I don’t know what isn’t working for my current audience. Analytics tell me that people do not want to watch my Let’s Plays, but not why. So I ask you dear reader, why don’t you watch my Let’s Plays?