You know how culture and history are fun? When I first read the name of Bifrost Entertainment‘s latest work, Iconoclasts, it put into my mind the very specific image of a period of Dutch history called the beeldenstorm, or ‘statue storm’. This was part of the larger Protestant Reformation uprising against Catholic excesses, but in the Netherlands specifically took on the shape of a wave of vandalistic attacks against church buildings and relics, targeted at destroying Catholic art and iconography — like statues. In Dutch, ‘iconoclast’ still literally translate to ‘statue stormer’: Not someone who attacks religious institutions in general, but very specifically someone who busts up statues.

Anyway, I’m not saying I expect Iconoclasts to have ‘breaking religious statues’ as a major gameplay mechanic. But a man can daydream, can’t he?

Iconoclasts opens calmly. A shot of a blue-and-green world, a starlit night, a broken moon, a person whose most highlighted features seem to be their butt and their strange hair style. 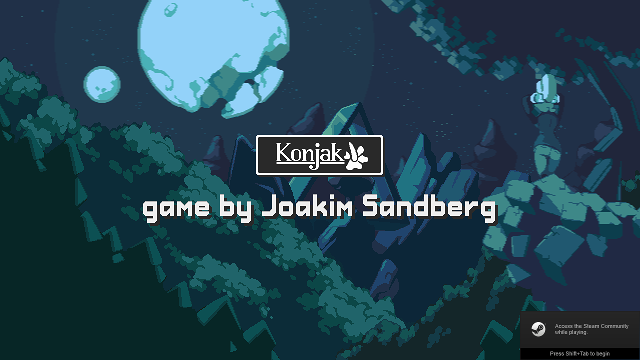 That’s not just me, right?

Then suddenly the title screen burst into view). 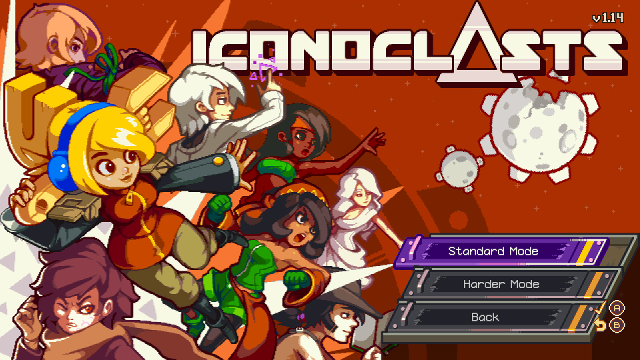 Loud sound is happening! More than two colours appear! There are characters everywhere! Strange-hair girl is here also! The moon is ticking like a gear! No butts are highlighted or in view!

There is a brief Options Time, but it is brief, because a) there’s honestly not that much to do in them, it’s sound and music sliders and keyboard/gamepad controls and a ‘fullscreen’ toggle that doesn’t even reference resolutions, and b) I’m pretty psyched by that sudden energy level switch, honestly. Let’s disrespect some religious institutions, yeah! 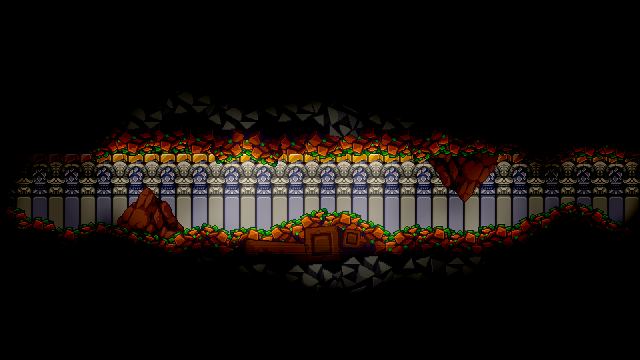 An opening cutscene briefly pans past a row of warbling underground pillars. I watch a few seconds of confusing oscillations, and then just as I start to ask questions the scene shifts again. 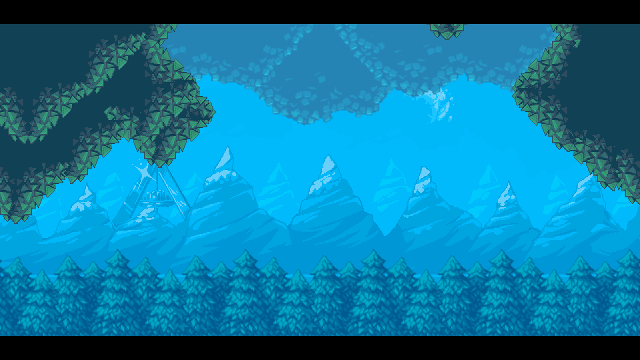 This is different, though more culturally familiar.

A high camera pans down from the sky, past some trees, and onto a small blocky house. Then the view shifts to inside the house. There are chairs, books, a window, a TV, and a bed; on that bed rests a butt that I recognize. 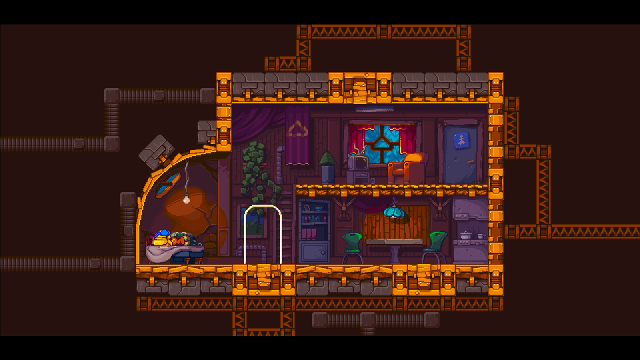 Ah, *now* I get the importance of that establishing shot.

There’s a sound outside the house. My character shoots up, emotes a big question mark, gets out of bed, and the appearance of a UI signifies I’m in control now. 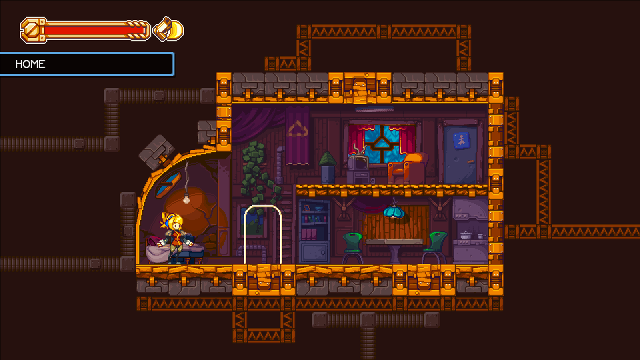 Now *I* am the master of my destiny.

What can I do inside this house? This analog stick makes me run, so far, so expected. This button makes me jump. This button lets me pull out my gun and fire at the walls. 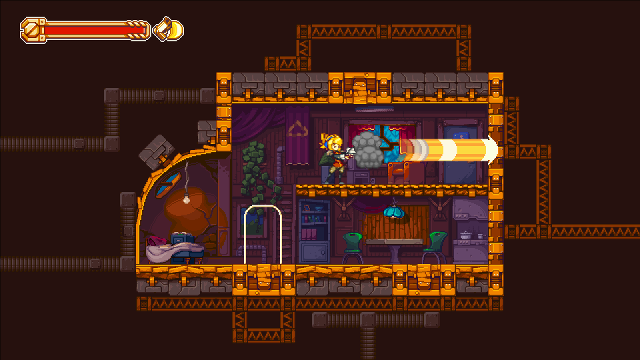 And then of course there’s the large door outline on the ground floor. Walking past it, a giant DOWN arrow appears overhead, and it turns out that’s the way to leave the house and go outside. 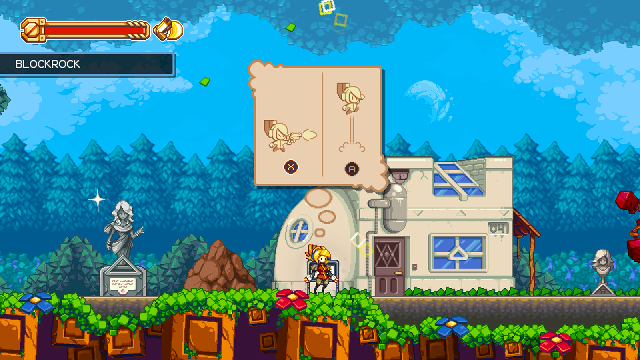 A sign outside teaches me what I already figured out myself.

Oh hey, a big statue. Fancy that. I learn through experimentation that at this ‘Icon of Prayer’ I can save my game — as well as perform a second mystery activity, perhaps later on. Saving presents me with five save slots, each showing a different tiny pixelated face; I opt the one that actually has my face on it, lest I accidentally transform my character or run a New Game+ or nonsense like that. 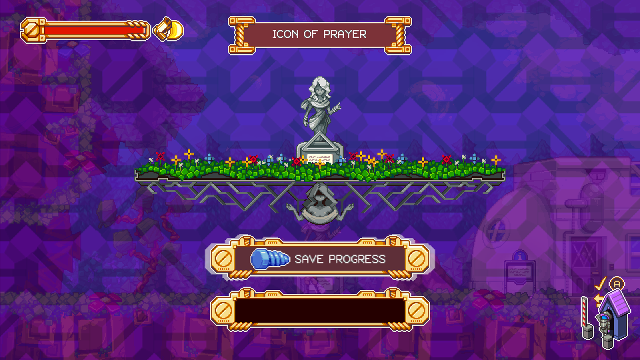 Woooooo! The second thing is a ~mysteryyyyyyy!

Alright, I’m outside, but now what? There was that noise… I can go left on this screen, or right. Since I’m experienced game player I expect right to be the progress-generating direction, so I pick left first, just for exploration’s/completionism’s sake…

…but then the left path reveals a wide, open area, with ledges, bridges, and a variety of enemies to shoot. 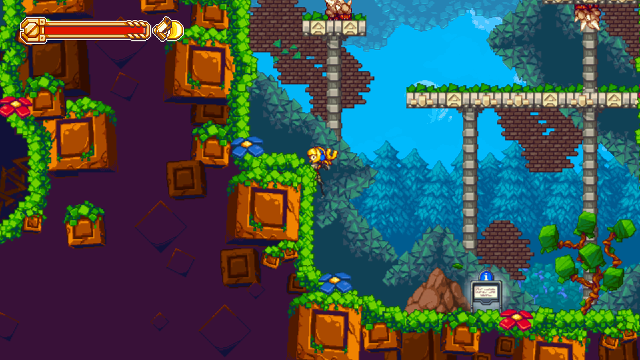 There’s even a sign teaching me how to vault these ledges.

Hmm. That’s… Maybe I’m just skipping ahead for no reason? I don’t want to sequence-break this early in the game. I backtrack, and try the right path instead. 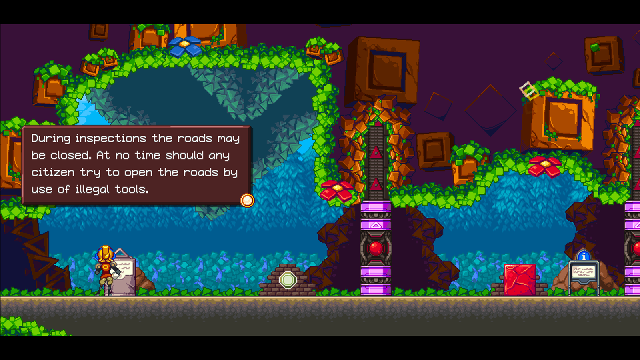 Well, that was a giant waste of time. A quick check of the start-button menu reveals that, yes, my objective does explicitly mention the sound coming from the left side of the house.

Running back, sourly, I notice some smaller statues similar to the Icon of Prayer dotting the path I just took. They’re staring at me. Judging my failure. Well guess what, statues! I have agency and you don’t! 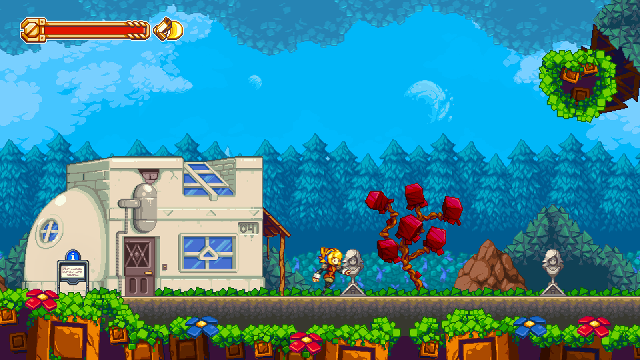 And in that moment, my anger relief impulse and my handgun team up to reveal something immensely beautiful: 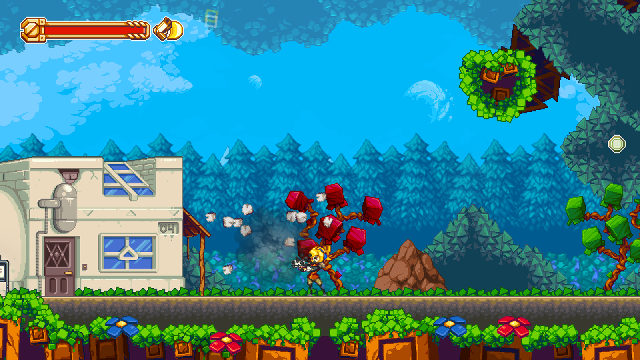 My whole nonsense talk in the intro about the Dutch Statue Storm was *actually relevant*!

I stand around for a minute, grinning.

Back on the left side of the field, I traverse the only path I can: Up the ledges, over the bridges, dodging the big glowing rocks that I can’t hurt. Opening the occasional giant blue treasure chest. 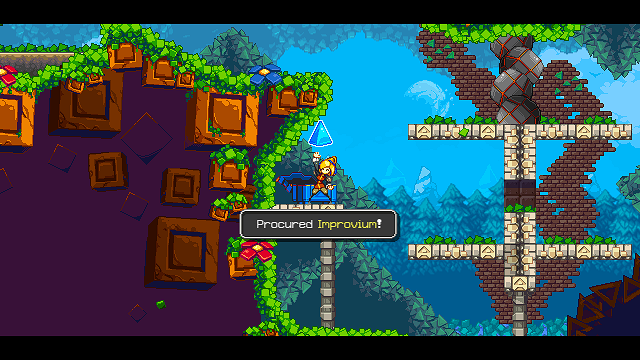 Seems weird that this stuff would just *be* here, but then again, what do I know?

I learn my fighting through doing, and some examples. Most enemies can be killed by repeated shots from my ‘stun gun’, which seems to have limited tracking — the shots auto-curve to about 20, 30 degrees if enemies are close-by but off-angle. Some enemies and some environmental obstacles, like the yellow-veined rocks blocking my path — distinct from the earlier red-veined rocks — require a charged shot, which is stronger and wider but requires a few seconds of charging and a few seconds of cooldown. Other enemies still are resistant to my shots, but I can upset them with a Power Ground Slam — that surprisingly involves less butt and more using my tiny legs to heel-stomp. 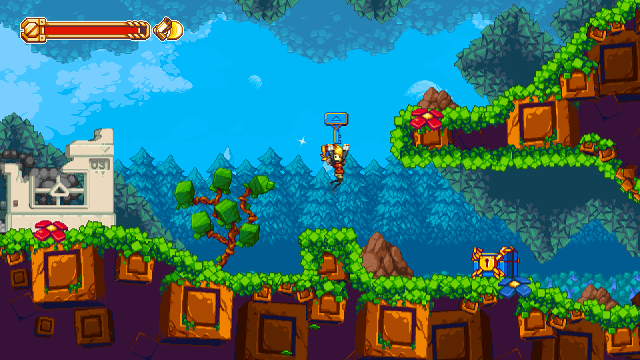 There’s also a bit where I carry a giant key to a giant chest to get to the Improvium inside.

I run and jump and crawl for several minutes until I finally find the source of the noise: A broken-down house, almost identical to mine but for the fact that it’s a ruin. I decide to investigate…

…I fall through the floor, into a small cave lined with the same rumbling pillars from the intro. They rumble and warble some more, and before I really know what’s going on, some sort of monstrous one-eyed shuriken machine bursts through the ground. 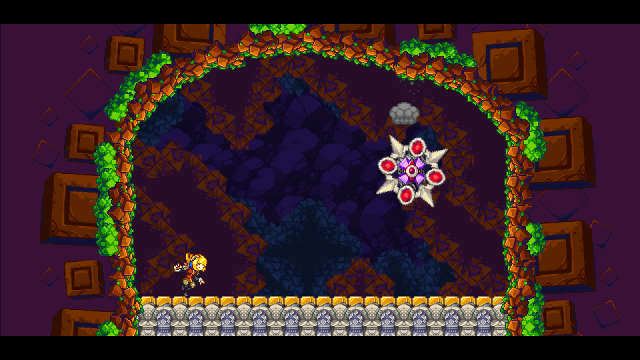 Sure, sure — as far as I know, this is a totally normal thing to happen in this world.

And then it’s boss fight time. I know because the shuriken monster starts lunging at me in predictable patterns, using the floor pillars to hide its presence and rush at me from unexpected angles. And also because a boss health bar just appeared on-screen.

Of course, we’re still talking tutorial boss fight, so I take the weird thing down with too much hassle. Tracking shots and jumping and pattern recognition, that’s what little protagonists are made of. With the monster dead, the whole pillar situation breaks down and drops me four stories underground, which is honestly less of a setback than it sounds — I just platform through some more caves and emerge more-or-less unharmed.

The weird noise thusly taken care of, I return home, to find… 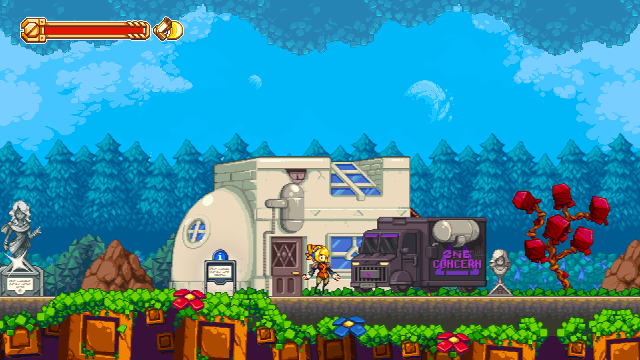 There are two strangers in my house. They identify themselves as ‘Agents’ Black and White, and me as 17-year-old Robin, daughter of the late Polro. And then… 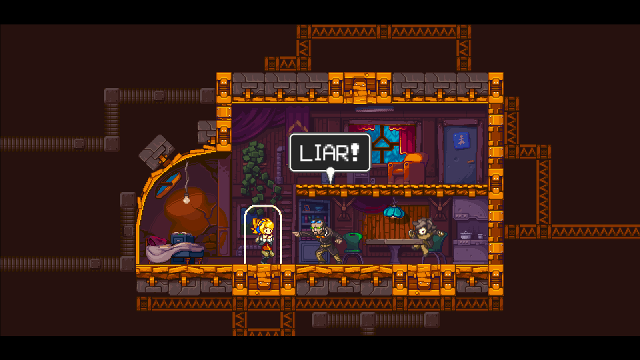 I sit through what’s essentially an inquisition, with Agent Black accusing me of all sorts of things. Apparently my dad was a mechanic for ‘the Concern’, and since he died, they’re worried I might be looking to ‘pick up the wrench’, so to speak. The nearby Settlement 17’s had a lot less incident reports and calls for officially sanctioned mechanics these days, after all… But obviously, obviously, Robin just ‘deciding’ to ‘be a mechanic’ is an absolute no-go. Private practice is a sin, after all. And there’s been a lot of Penance in Settlement 17 already… might be someone in there is sinning in secret? Or someone who lives close-by? With a heart of gold and dad’s handy wrench? 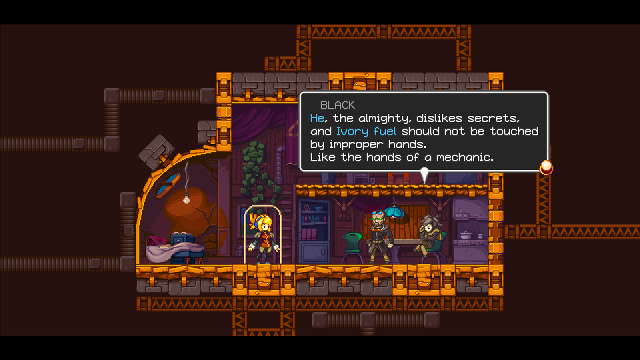 I’m trying to not just transcribe this conversation beat-by-beat, but there’s a *lot* going on here.

Then, just as the interrogation comes to a crescendo, the Agents get a call. He’s been spotted. They leave, but not before suggesting I should be a good girl and stay home for the hour, keep to my own devices, and not do any unlicensed mechanic-ing.

Ten seconds after the Agents are out the door, Robin hops up, heads down her secret workshop basement, and picks up dad’s old gold wrench. 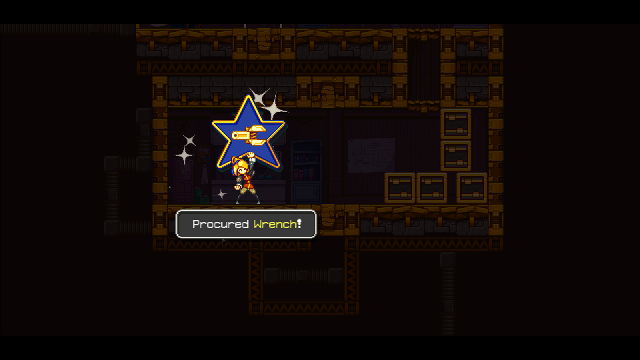 Because nobody tells Robin what to do, that’s why.

Wrench in hand, I can now make my way to Settlement 17 — closed doors are no object to those as handy as I. Settlement 17 beckons not just because I’m trying to avoid these Agents, but also because they offered some helpful breadcrumbs: If that place does need repairs a lot, and if their current ‘Concern mechanic’ is gone and no official replacement has been sent yet, then who better to do it than the only woman available? Sure, it’s a ‘sin’. But what good would a game called Iconoclasts be without a strong theme of opposing religious authority? 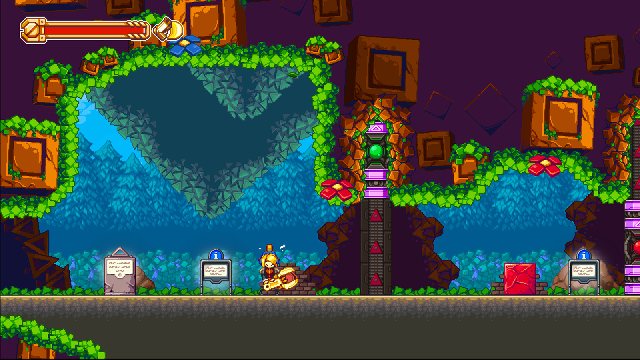 Now, is there a risk that this is a trick, and that the Agents will be waiting in Settlement 17 to catch me in the act? Oh yeah, a very high one. Is that going to stop me? Not a chance in hell. Will there be consequences more severe than ‘and then I fought the Agents in a boss fight, and I won, and everything was good for everyone forever’?

…Let’s see how that shakes out, huh?