Take a moment to imagine: What’s the most self-indulgent thing I could possibly do on this website? Apart from letting it all burn down, or using the site’s database as my personal torrented game storage. The best answer I came up with is: Write about a video game about writing. It’s the perfect overlap of the real and the imagined! No, wait, I actually have an even better one: Imagine if I wrote about a video that was about a middle-aged white man struggling to write! His most important work!. Oh god, can you imagine, it’s like I’d be staring into a mirror. I can’t say for sure that the whole piece would be introspective navel-gazing, but one can only imagine.

Anyway, in unrelated news, I played Orthogonal Games‘ The Novelist this week. ‘A game about life, family, and the choices we make’. And also pointedly about a struggling middle-aged white dude writer. You’ll understand why I figured I should keep this review short. Unless you want to hear all about my own troubled upbringing, possibly in tortured metaphor form.

The Novelist, Or: The Human Whisperer

The Novelist is, in brief, a game about the Kaplan family, your typical mid-nineties American family unit. Father Dan is an aspiring writer struggling to finish his current book, feeling himself bent under the pressure of his advance and the expectations and pulled in separate directions by his career and his family. Mother Linda, an aspiring painter herself who put her career on hold to care for their son, is increasingly dissatisfied with Dan’s distance in the marriage, particularly as his writing stress increases, and she’s starting to wonder if she made the right choices in the past and if she’s making the right choices now. And young son Tommy, a quiet kid, takes after his parents with promise at drawing and storytelling, but struggles with math, reading, and making social connections at school. His parents could probably help him develop into a healthy, capable adult, but do they even have time to notice?… In an attempt to work all this out, the Kaplans decide to spend a summer at a forest/mountain/beach house: Nine weeks of relative isolation in which Dan can write, Linda can paint, Tommy can relax, and the family can work through their issues together.

You, of course, play as the ghost. 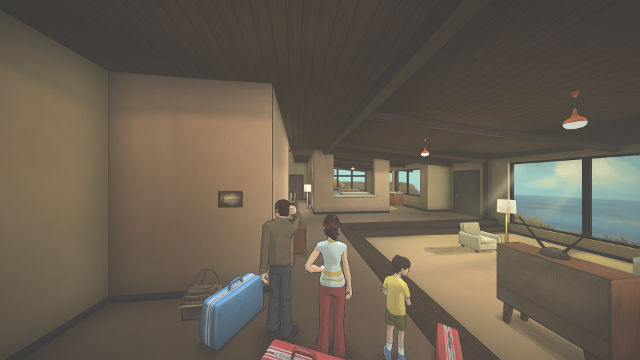 Try telling me an isolated forest/mountain/beach house like this *wouldn’t* be haunted.

As the ghost, you are deposited into the Kaplan’s vacation house at the start of every week. Your goal is to find out what thing the family is working through this week, and there is always a thing: Maybe Linda’s grandmother died, or Dan developed a drinking habit, or maybe the family just doesn’t know what to do with themselves this week. You move through the place either by walking, like some sort of ghost amateur, or by possessing light fixtures. The former allows you to interact with the environment, but also puts you at risk of being noticed by the Kaplans; the latter makes you stealthy, and can also let you zip across the place more quickly. 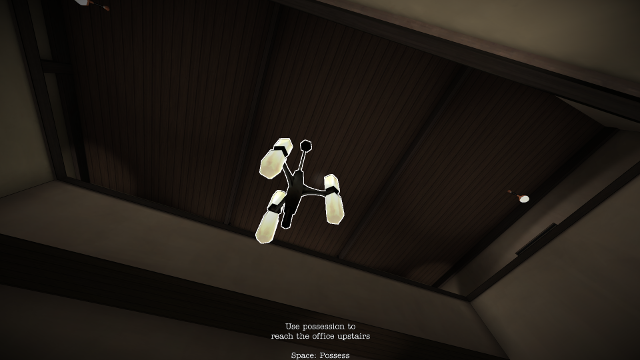 Like, sure, you *could* walk the stairs. If you want the other ghosts to laugh behind your spectral back.

‘Interacting with the environment’ means three things. It means reading the letters, book, and drawings that the Kaplans leave lying around the house. It means reading the Kaplans’ minds, from a distance, to find out what they’re thinking. And it even means sneaking up close and personal behind the Kaplan of your choice and diving into their memories, entering a shadow version of the house populated by still images and repeated thoughts. 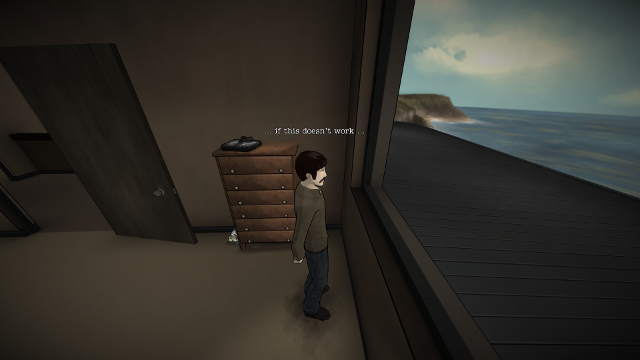 This is me reading Dan’s mind from the outside. 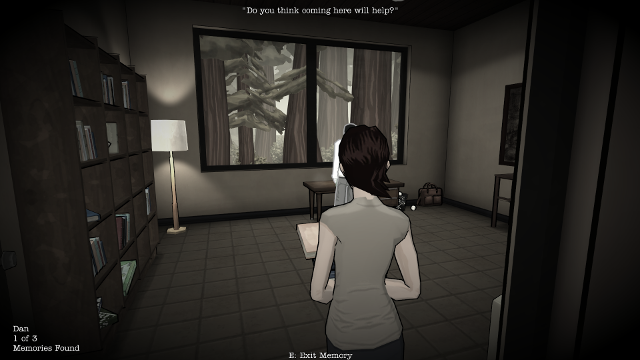 This is me reading Dan’s mind from the inside.

Generally speaking, things develop like this: Every week is characterized by A Dilemma. For instance, the first week is all about which activities should set the tone of the family being here now: Dan wants to focus on his writing, Linda wants her and Dan to spend quality time together, and Tommy really wants to play board games with dad. By reading the clues, exploring characters’ memories, and then reading their mind, you can find out which object in the environment represents that character’s chosen solution. You get to pick one of these, and that’ll be ‘what happens’. 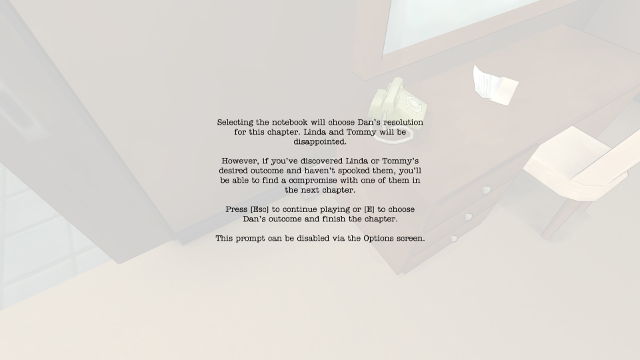 It could be this.

Now, here’s the trick: Picking any one character’s option will make the other two characters unhappy. So pick the notebook, Dan focuses on writing, but Linda feels neglected and Tommy feels alone. But, if you’ve ‘played carefully’ and avoided getting spotted by the Kaplans, and if you discovered the desires of more than one character, you can select one additional ‘compromise’ option in the shadow house. So maybe Dan spends some time with Linda, or maybe he plays a quick game with Tommy. It all depends on how good a ghost you are.

Oh yeah, the shadow house: Once you select a main option, you’re transported to a nighttime version of the house filled with ghostly notebooks about the house’s haunted history. Don’t worry about it too much. 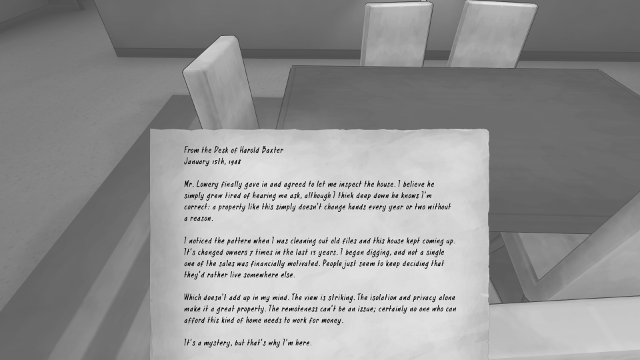 These all describe characters talking about the ghostly presence in the house… which is you. You’re reading fanfic about yourself.

Then you move up to Dan, and whisper your solution into his sleeping ear, which takes the form of an actual audio clip going “What you should do is [whispering]“. And then that thing happens.

So, for instance, what I did was… 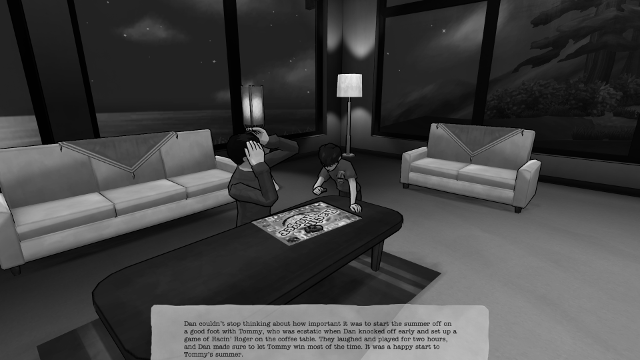 Obviously you don’t take your kid into a solitary house for the summer and then *ignore him*. I’d seen the drawings, I know Tommy was feeling neglected. One early evening of play sets up so much good memories. 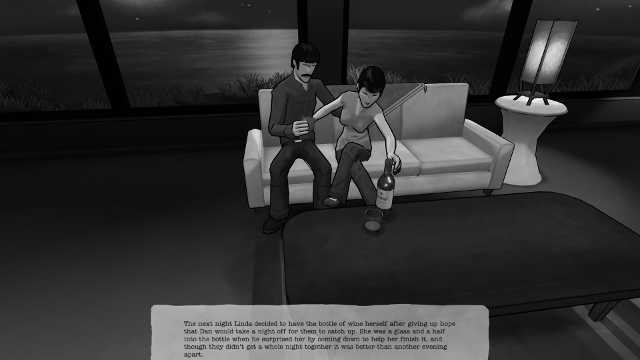 And I wasn’t going to let Linda feel left out either. The compromise meant I couldn’t make Dan spent *much* time with her, but the spirit was there. 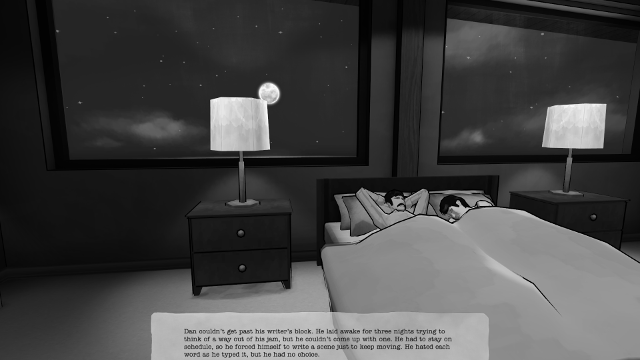 Now, did that mean Dan’s writing was off to a rough start? Yeah, it did. You can’t please everyone.

And then you do that eight more times and that’s the game.

There are two things I really liked about The Novelist. First, and actually foremost, it’s impressive how many of the dilemmas actually feel like dilemmas. Not all of them are equally strong, but the ones that were did give me some pause. I can’t imagine not going with Linda when her grandmother died, but on the other hand, the book signing was also really important to Dan. And even silly stuff like the vacation destination: All three vacations sound good to one particular character, which means you’re always going to upset at least one person. Does Dan not get to camp, or Linda not get to hike, or Tommy not get to fly? So many dilemmas had me sigh and wish for the time and money to ‘just do everything’, which is the sign of a good dilemma.

Related, I really appreciate how clearly the writing posits a compromise solution as a compromise. There’s always such a clear tonal difference between a character’s chosen solution, the compromise solution, and the non-option. ‘It wasn’t as good as they would have wanted, but it was better than nothing’ is a hard grey area to reach, and The Novelist nails it over and over. 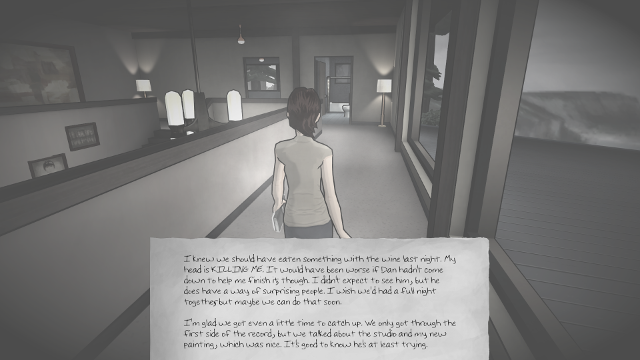 Characters’ memories the week after will often reference the state of their option. Here you can see that Linda was *happy* with coming second, but obviously still would have preferred coming first, in a way that I could see myself think in that situation.

Second, I found I actually kind of enjoy the stealth gameplay? I mean, don’t get me wrong, it’s silly and wonky and often feels more than a little out of place. Why is my ghost hiding from people again?… But from a ludic perspective, I understand the need to have something engaging and interactive here. If The Novelist had just been floating from place to place to find letters and read thoughts, it might as well have been a visual novel — which would have been a valid choice, sure enough. But the inclusion of the house as a physical space, and the light fixtures as hiding/travel points, only has meaning because of the threat of detection. It’s almost never difficult or threatening, but all the same it is present, which makes it a gameplay consideration. It means you have to be aware of travel paths, and sight lines, and listen to the background noises of the Kaplans moving across the space and talking to each other. And occasionally, it means hearing ‘what’s that’, and whipping around as fast as you can to leap into the nearest lamp. There’s a whole gameplay system that revolves around flickering the lights to draw characters away, and it can only exist because secrecy is a gameplay concern — and actually sort of works as a mechanism because of it. 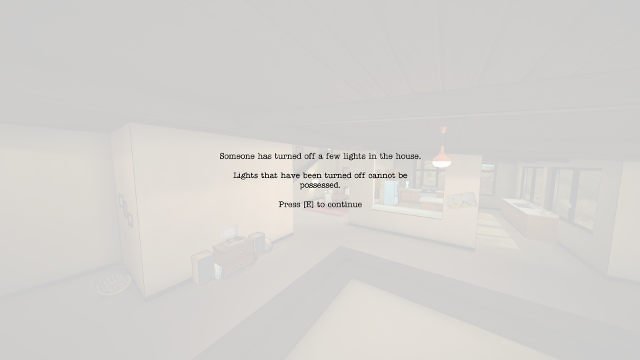 And then after a while the Kaplans become energy-conscious, and suddenly you’ll need to redraw your entire mental map of the house.

It’s hopefully clear at this point that The Novelist is pretty much a cool niche game. It’s not complicated, and it’s not long: I played through it in two hours and I read as much as I could find. There is some replay value here in taking different actions and finding different end states, as long as you understand that the actual play structure isn’t changing: Linda’s grandma is always dying and Dan is always breaking out the bourbon. Nevertheless, if you want to see what it’s like if Dan does neglect his family, that’s another hour or two, I guess.

For me, The Novelist was valuable mostly as an experiment in seeing how narrative design and spatial design overlap. My favorite part of it wasn’t so much the writing itself, as it was the way the house space changes based on your decision. If you play board games with Tommy the first night, he’ll draw that, and store the drawing and the game in his room forever. If you let Linda set a family dinner schedule, there’ll be a new schedule up in the kitchen every week. If Dan sticks with his drinking (almost bizarrely a choice coded as being good for Dan), you can bet there’s gonna be a bourbon bottle in his writer’s room. Like so many Telltale-style games, The Novelist is primarily a game about… not so much the choices themselves as it is about the question of ‘what do these choices say about you, the player’. What story do you want to tell? What vacation house are you building over these nine weeks? Are we seeing a budding artist’s commune, a child’s play-place, a somber remnant of a marriage in decline? It’s not really anything more than that, but neither is it anything less. It’s an interesting experiment in virtual environment storytelling, and while it likely won’t leave a great lasting impact on me, I’m glad The Novelist exists and I’m glad I got to play it.

And for the indie-appropriate price of only fifteen Steam dollars, you could too.

Jarenth isn’t a novel-writer himself, but let him assure you that science writing totally deserves its own game in this vein. Share stories of ‘Reviewer 2’ with on Twitter or hang out with him on Steam. And if you dig Indie Wonderland and Ninja Blues in general, why not consider supporting our Patreon campaign?