Eagled-eyed viewers may have noticed that I referenced ‘looking for a mountain to climb’ last week as a metaphor for a challenging game that inspires you to keep trying. For once in my writing career, that actually wasn’t a random segue: I’d started playing Celeste, the mountain-climbing themed challenge platformer by Matt Thorson and Noel Berry. I hadn’t seem much of Celeste in the days following launch, except that a) it was getting rave reviews from outlets I generally care about, and b) it looked in some particular artistic ways to be entirely my jam. Hence, here we are. If you subscribe to the Indie Wonderland world-fiction that I write these reviews as I play, this review actually originates from a week and a half ago. Welcome from Friday January 25th, everyone. I can’t wait to see the Patriots win.

Celeste starts off quietly. Snowfall, calm music. A quick screen reminds me that the icon of two hills and a floppy means autosave, which I’ve already forgotten. And then, there’s the mountain. 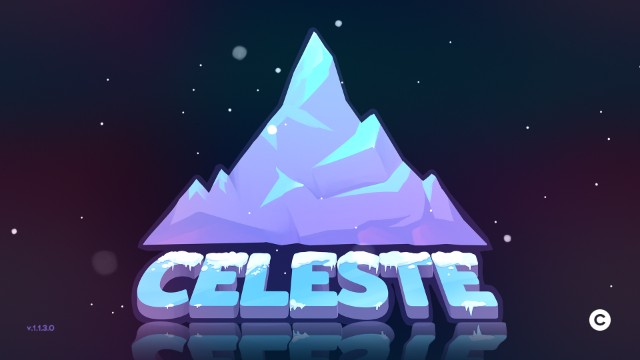 In all its monochrome glory.

And then, there’s the mountain again. 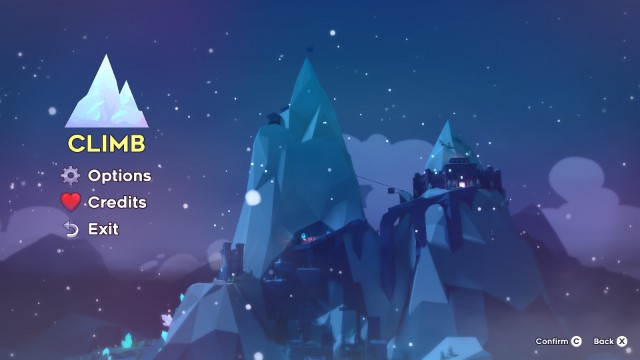 In scenic 3-D this time!

This is actually kind of cool: Celeste‘s opening menu is a rotating pan around a single mountain peak, the highest one around. It’s full of construction and activity, and I can’t help but think that I’ll be traversing that activity later. As far as setup goes, it’s effective.

I traipse around in the options for a bit, but there’s nothing terribly eye-catching to spot here. Resolution, audio categories, language, the works. The only two things of note are a) the native inclusion of a ‘speedrun clock’, which suggests a particular type of long-lived market Celeste might be aiming for, and b) the fact that the standard ‘English’ language setting is adorned with a Canadian flag instead of an American or British one. I bite back the urge to make one of a number of tired, stereotypical jokes, because it’s 2018, for Steve’s sake.

Starting a new game brings up… a selection of ticket stubs, acting as save slots. Here, again, two things are noteworthy. One, Celeste offers something called ‘Assist Mode’. I’ve actually read about this: Assist Mode is intended as a more granular difficulty manipulation than the standard Easy-Medium-Hard triptych. Selecting the option gives a brief tutorial, explaining a few of the ways Assist Mode can be used to affect the Celeste gameplay experience. I don’t actually know the impact of any of these yet, and I won’t be using Assist Mode right now, but it’s super cool that this option is here, clearly and easily provided, and worded in a welcoming and inclusive way. 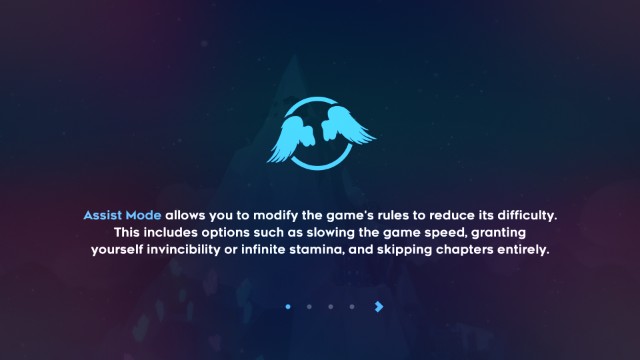 More games need to get over their obsession with singular difficult as a metric of worth, in my opinion.

And two, the ticket stub I selected is now adorned with the picture of a red-haired, red-cheeked person. Their default name is ‘Madeline’, and while I have the option to rename that, I hesitate. Madeline seems like a fine name here. Wouldn’t it be fun to play the developer-intended experience for once, instead of compulsively pressing my stamp onto everything? 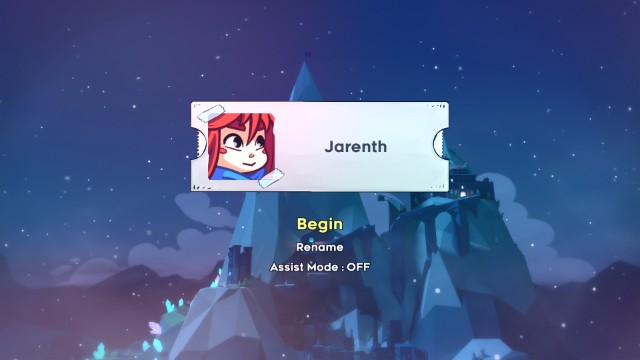 The rotating mountain camera zooms in on a small house. This is it, Jarenth. Time to get going. Just breathe. 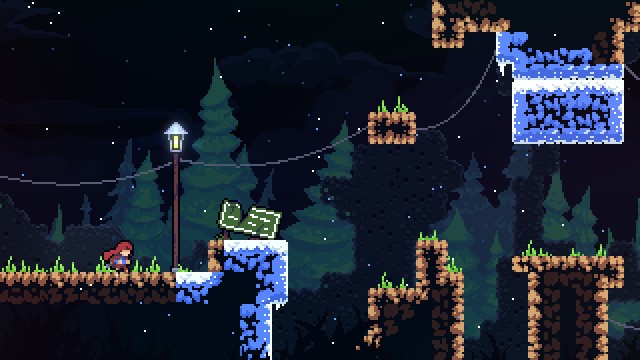 And then, there we are.

I’m quickly interrupting this stream-of-consciousness narration to point out that this game is gorgeous. Holy smokes, look at this art style. I know I’m a sucker for pixel art, but listen: That should make me more critical, if anything. The background, the motion, the level of detail — I feel like I’m looking at a masterclass here. And this is only the first board.

I try the controls. Left analogue stick moves, as expected. A button jumps. The other buttons… don’t seem to do much of anything? But who needs ’em, anyway. I try moving to the left, and find to my surprise I can make it back to the parking lot where my car is. I can jump on the car, if I want, but that doesn’t seem to do much of anything. And there’s nothing even left. 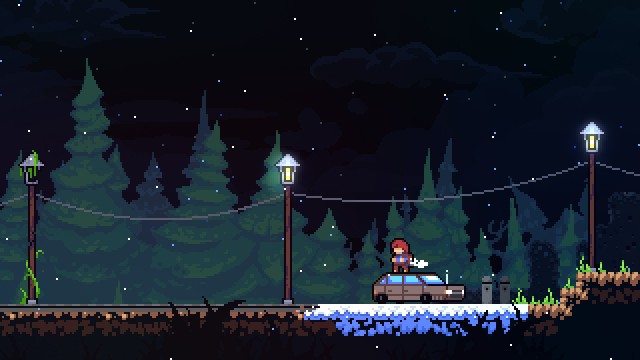 I’m also pretty sure this is terrible for the suspension.

So I move to the right instead. I jump onto the outcropping with a broken sign, which surprisingly I can’t read. I jump past the gap, and onto the first outcropping. Then past the second gap, under the frozen blue block… 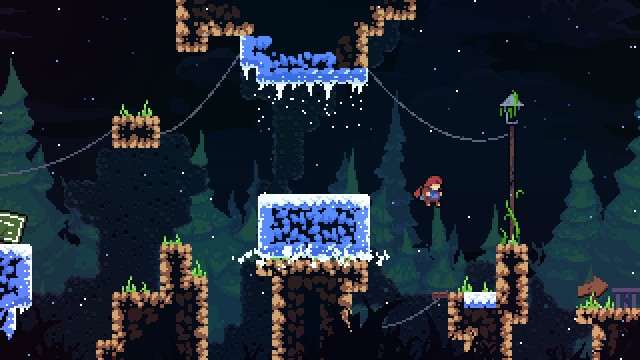 Well, that was close. I think I might be stuck here now, though. I hope I locked the car.

One screen to the right, I encounter a block I don’t think I can jump. It’s like… three times my vertical jump height. Luckily, a friendly nearby bird teaches me that I can hold Right Trigger to climb up vertical cliff faces. 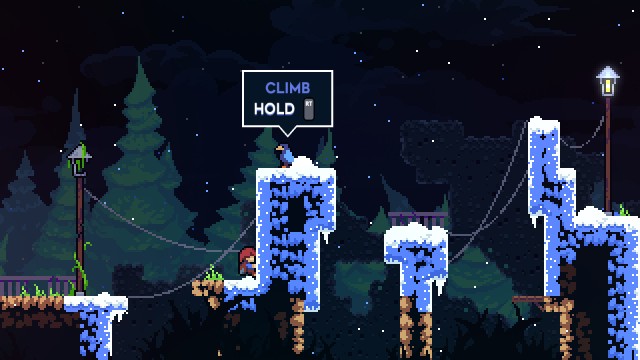 You know, these sorts of things happen commonly when mountain-climbing. 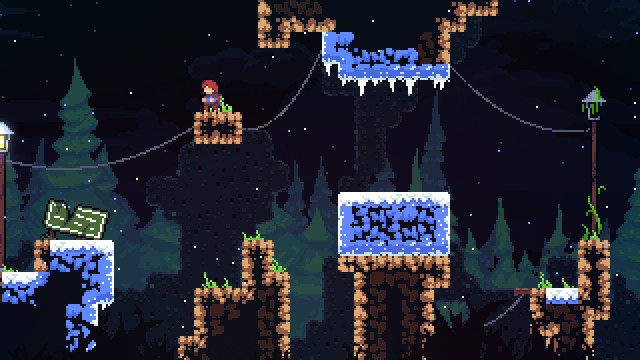 NO GODS NO MASTERS, ICE BLOCK

I move a little further, to the right and also up. The forest is pretty, in a frozen solitude kind of way. The only living things I encounter (apart from the trees) are a few birds, and some butterflies. It’s also not very challenging, but hey, we just got here.

Suddenly, I meet another living thing! It’s an old woman, living in a log cabin! She is a massive jerk. 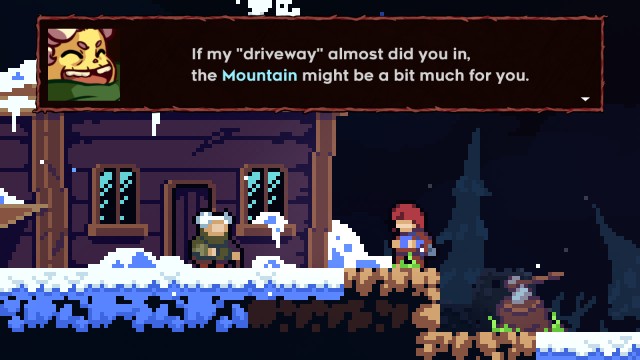 I almost died out there, lady!

The old woman chats with the main character, who I’m increasingly regretting calling ‘Jarenth’. Some wisdom is dispensed, re: The Mountain, its strange nature, and things I might not be ready to see. Some laughs are shared, from here to me. And then I leave. I’ve got better things to do, okay.

I cross a rickety stone bridge, the old woman’s laughter still audible (and visible) in the distance. I’ll show her who’s not ready fo-

The bridge starts collapsing behind me. This is suboptimal. I keep running right. Oh god, there are holes in this bridge too! But nothing I can’t leap. One jump goes well, I keep running. The second jump…

I leap. As I fly, the stone section I’m aiming to land on crumbles into dust, and for a moment, it looks like I’m doomed to plummet.

And then time freezes, and the bird from before casually flies in. And teaches me how to do a mid-air dash. 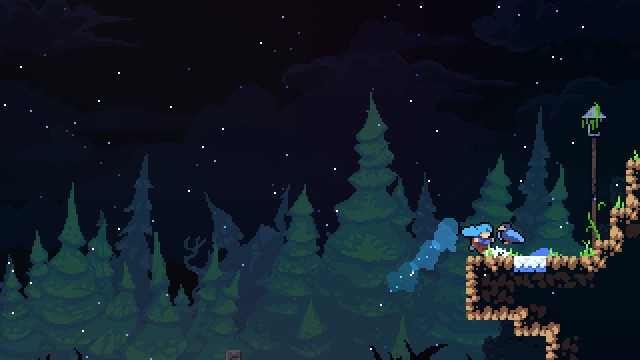 Ah, okay. I see how this is going to go.

Madeline/Jarenth takes a moment to catch their breath. We can do this. We can do this. And then the camera zooms back out to the 3D mountain, and the first actual level pops into view. The Forsaken City. Sounds like a lovely place, I’m sure. 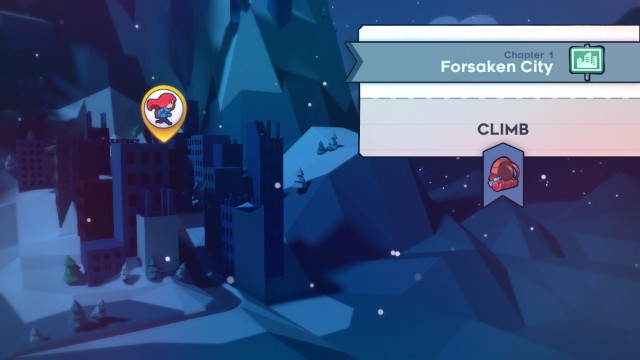 They forsook it because it was *too lovely*.

I think what I should do here is take some time, and dive deeper into Celeste before making any more bad jokes slash judgment calls. I think this game might be interesting. I also think I probably don’t want to show too much point-to-point gameplay; call me paranoid, but I feel there’s a good chance of me accidentally spoiling more interesting set pieces like that collapsing bridge bit.

So instead, I’ll just climb the whole dang mountain. And I’ll see you on the other side of it.