In the closing weeks of 2017, which at time of writing are about fourteen years ago, I made the mistake of not remembering the name of Kitfox Games‘ The Shrouded Isle. I found it by Googling the phrase ‘that green game about sacrificing cultists’, and then made the mistake of tweeting about it.

Which Kitfox Games then saw.

That I was going to review The Shrouded Isle to make up for this terrible oversight was obviously a given. The only question remains: Am I going to repair my reputation by praising in gameplay what I couldn’t remember in the name? Or am I going to pile-drive my remaining Kitfox Games Reputation straight into the depths of the earth?

(Game source: Bought it myself, for penitence reasons.)

Honestly, though: You can’t tell me my visual memory isn’t apt. 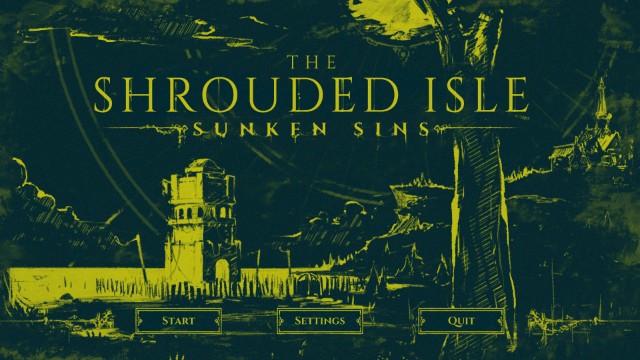 Green and yellow, if we want to be *particularly* accurate.

Ah, but here’s the immediate plot twist of the year: Things don’t have to be green! They can be purple, or orange, or teal, or sickly pink. Such wonders The Shrouded Isle has to show you! 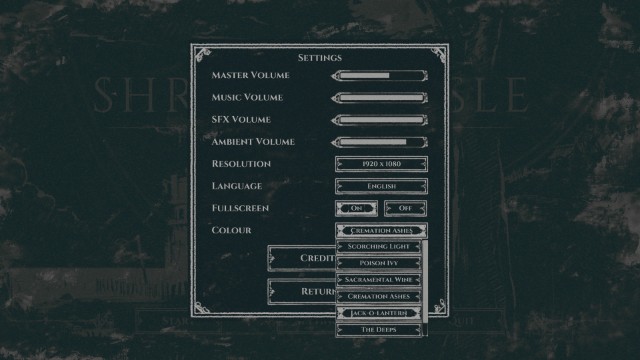 You could even opt for *no colours*, if you want your cult murder simulator served with an extra side of dreary dread.

All in all, this opening is screen is pretty much doing it for me. The music is on-point, the colours are what I was hoping for, and let’s all take a moment to appreciate this superb two-tone drawing and art style. I’m definitely in the mood to make some terrible decisions about the livelihood of others, that’s for certain.

I select Start, and the game kicks into a cutscene. Rain, lightning, a single tree. “495 years ago, our Founders saw that humanity would perish, except the worthy.” 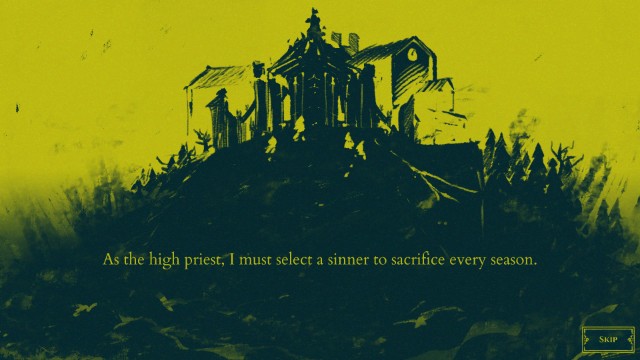 See! I *was* right about this.

Five years until judgment day. If ‘we’ are ‘free of sin’ at that point, ‘He’ will save us from suffering. That sounds eminently achievable. Let’s get some salvation going. 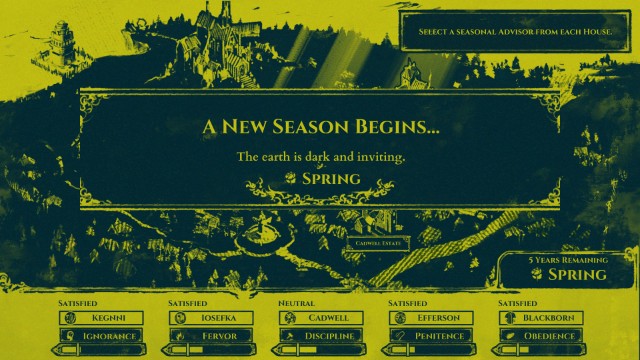 The Shrouded Isle starts, and I find myself looking at, well, a shrouded isle. A bunch of houses, including five large named houses and one Cathedral. A fountain in the center, a river to the side, and a mysterious tower off by the coast. The bottom is decorated with five names, five nouns, and five inscrutable bars, and in the top right, I see a single mysterious command: “SELECT A SEASONAL ADVISOR FROM EACH HOUSE”. I wait with baited breath for The Shrouded Isle to tell me what all of this means.

I wait a little longer. 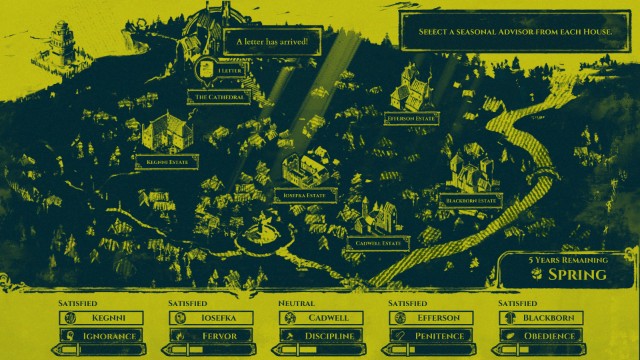 I hope waiting isn’t a sin.

Ah, okay. So that’s how it’s going to be, huh. Sure, I don’t need any help interpreting the actual will of actual God. I’ll just mess around, that definitely won’t backfire.

Okay, step one: I’ve got a letter in the Cathedral. Clicking on it reveals that… Ah, apparently one of the members of House Blackborn is turning in her own mother, for general uncool behaviour. I can either seize the accused mother, which is good for Ignorance, or publicly reward the child for her loyalty, which house Blackborn will like.

I take a detour to try and find out what any of this means. Mousing over the stuff in the bottom gives some info, but not a great deal. There are five houses, each with an assorted level of satisfaction: Two at +25, two at +50, one at 0. Each house is related to one of five what-I’ll-call virtues: Ignorance, fervor, discipline, penitence, and obedience. Each of those has a level between 0 and 100, with ignorance lowest at 25 and discipline highest at 50. Each virtue is associated with a list of traits: Ignorance is ‘improved’ by Childlike and Dull and Haunted, but hindered by Artist and Curious and Imaginative. I don’t know why some of them are bolded like that. 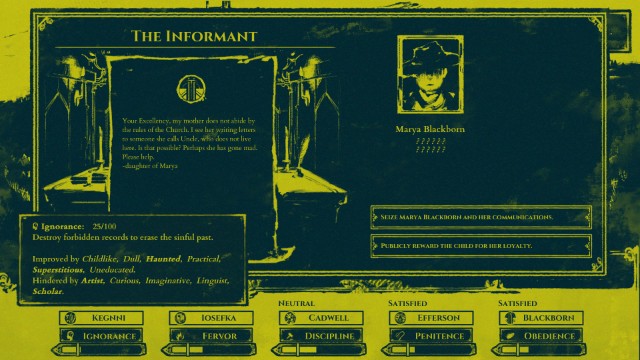 You’ll also see that each virtue has a little vertical bar through the horizontal bar. I have no idea what this means and I can’t seem to find anything about.

I’m none the wiser. Okay, I’m a little the wiser. Ignorance is my lowest virtue, and publicly accusing the Blackborn woman raises ignorance, so let’s go with that. It turns out there’s a hidden cost of house Blackborn getting grumpy, but listen, I can’t please everyone. 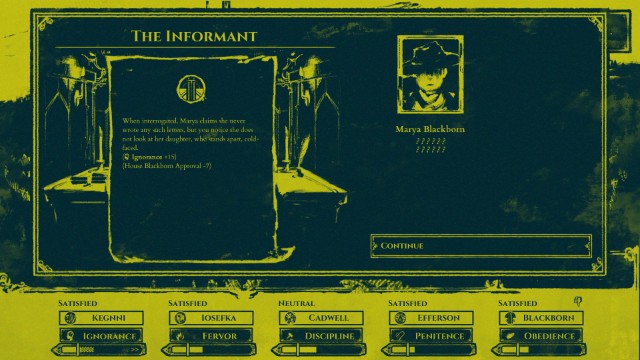 Can’t make an omelet without sacrificing a few eggs.

Back at the main screen, I decide to try clicking on one of the houses. Let’s say… house Blackborn, keeping with the theme. Doing so teaches me the internal structure of house Blackborn: Andrei Blackborn and Kasmira Blackborn as the oldest married generation, with Lazlo and Marya Blackborn their children. There’s also an ‘Inquisitor Blackborn’, who seems to stand outside the family tree. 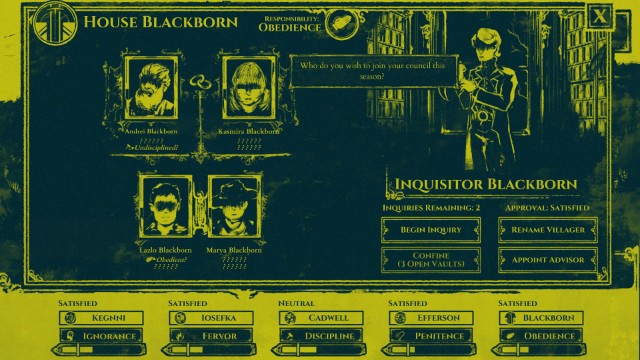 In a quite literal sense.

Now, I know a few things. I know Andrei Blackborn is rumored to be ‘undisciplined’, and that Lazlo Blackborn is rumored to be ‘obedient’. I have no idea what this means, but I do know how I can find out more: By launching Inquiries into their behaviour. I’ve got two Inquiries, and by clicking that button and then selecting a person, I can ask about either their Virtue or their Vice. The former is free, but the latter makes the house in question like me a little less. And the second inquiry has a heavier cost than the first: 0 and -3 versus -3 and -6. 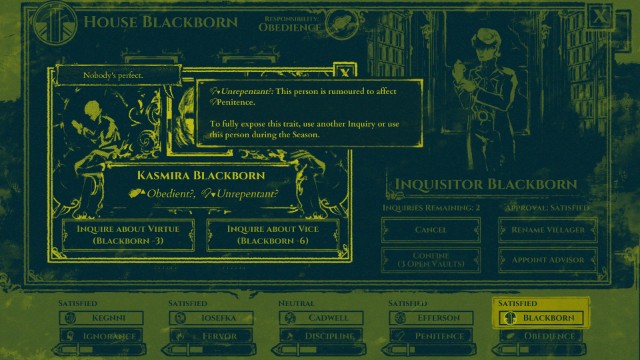 By accident I discover something interesting: It’s possible to ask about the same virtue or vice again, moving from a general ‘rumored to be this’ level to a very specific one. For instance, Vasin Iosefka is ‘rumored to be full of fervor’. But if I dig deeper, I find out they’re a Singer, which carries a bonus of +10. 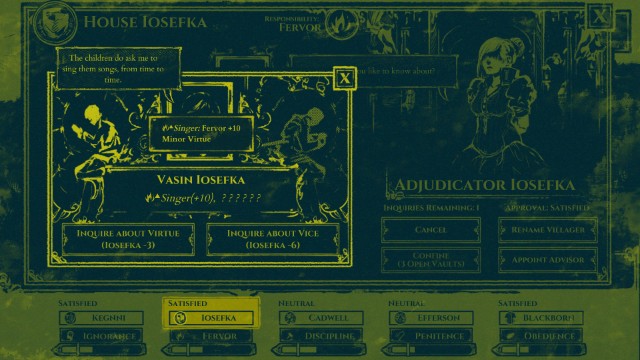 Again, and I don’t mean to harp on this too much, I don’t actually know what this *means*. But it’s cool to have the systems down, I guess.

I can rename individual villagers, which I guess they’re okay with. There’s a button for ‘confining’ villagers, except that option’s greyed out. But what the game actually wants me to do is appoint one ‘advisor’ from each house, for the Spring season. I don’t know what effect this has yet, so I just pick five people that look cool. At my fifth pick, the ‘select an advisor from each house’ prompt turns into a large button reading ‘BEGIN SEASON’. So I click, and begin the season. 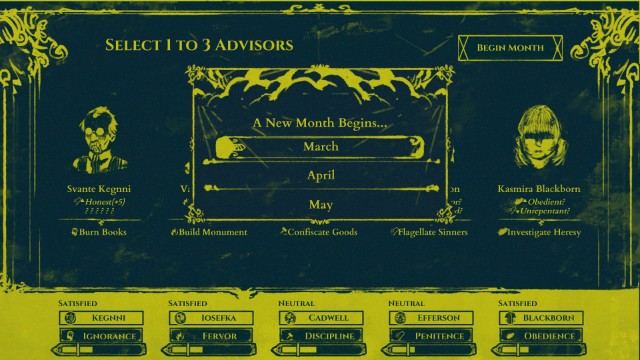 The Shrouded Isle surprises me by actually giving me some directions on this screen. ‘Select 1 to 3 advisors’, it tells me, so I click around the portraits a bit. Each advisor selected gives me a little quote, but more importantly, I can see under their portrait the expected effects of selecting them. Vasin Iosefka, the singer, will raise fervor, which is the responsibility of house Iosefka, and then raise fervor again, because they’re a singer. There’s also a third effect that I don’t know about, presumably related to their vice (and presumably bad). On the very bottom of the screen, the fervor bar gains a shaded part, presumably showing the effect of my choice if I make it this one. 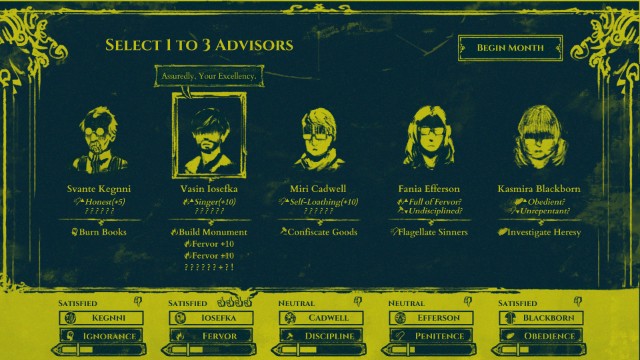 This is how that works. I think.

I select the advisors for house Kegnni, Iosefka, and Cadwell, each of which I know the virtue for. Interestingly, when I add advisors after Vasin, the shaded part of the fervor bar actually goes down — not because the other advisors hate fervor, I think, but just because I picked more than one? Interesting.

Alright, let’s roll this month. First up: Svante Kegnni, showing that advisors go from left to right, not in the order they were selected. Svante manages to increase ignorance an average amount, which in this case means +3 points. Svante also adds one point to penitence. And finally, Svante reveals the category of his vice to be ignorance — this goes down, but I can’t tell by how much. 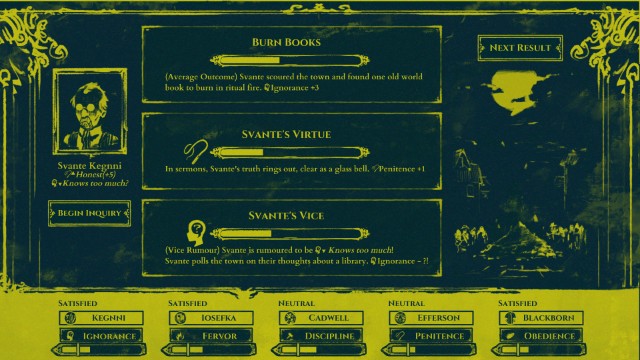 Vasim Iosefka and Miri Cadwell go next, both doing small things for their respective virtues — and each reducing ignorance, a fair bit in total, since it turns out they’re all knowledge-hoarders. Well, that’s a thing. That bar’s in the red now, which I hope doesn’t kill me immediately — and hey, it doesn’t. So I survived one month.

The month ends with showing me how the reputations of each house change by my decisions. Each of the houses that I chose an advisor for goes up a little bit, while the two houses I didn’t pick go down. I guess advisorship is a hot commodity on the island, very prestigious, good career path. 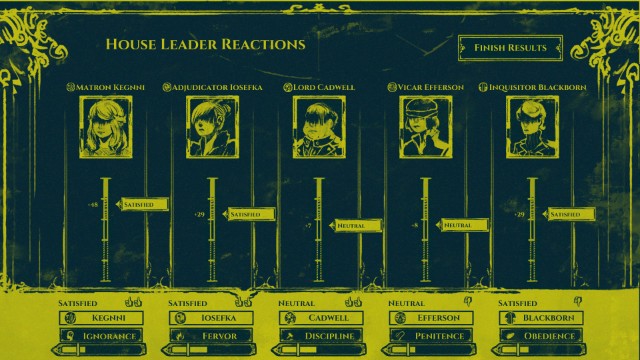 So get the Cadwell kid some more work, that’s what I’m getting here.

April and May go by similarly. I quickly learn that I was right: Picking less advisors does increase the effectiveness of each, as well as raising the prestige of their associated house by more. I also learn that I picked a real bad batch of advisors when it comes to ignorance, but still nothing seems to happen with that red bar. The months go by, the values go up and down, I learn some things about my villagers…

And then it’s time to sacrifice someone. 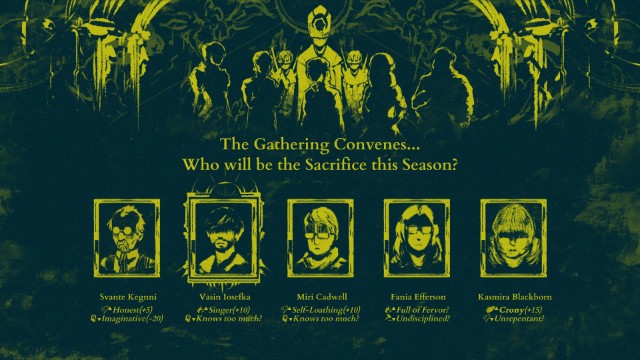 See! I *did* remember that right.

Hmm, okay. So the advisor position has some downsides. I scope out the possible sacrifices, and learn three things: a) Picking a sacrifice will increase the global virtue associated with their vice, since it puts villagers on alert with respect to: Not Doing That, b) The global virtue associated with the sacrifice virtue will go down, as villagers are confused: Why were they picked if they were virtuous, and c) The house associated with the sacrifice will very much not like me anymore. This seems to depend on the vice as well: Picking Svante Kegnni makes house Kegnni angry because ‘his transgressions are minor’, while picking the Blackborn kid enrages house Blackborn because ‘I lack evidence of any transgressions’.

Sorry, Svante! You were a good guy to work with, but also, not. My hands are tied. Not as much as your hands, on account of the whole… you know what, nevermind. 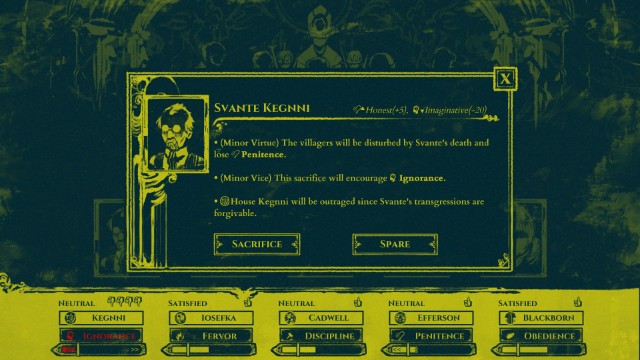 Better you than me?

The sacrifice is chosen. The convent gathers. And in one fell slash, I learn why none of the colour schemes at the start included the colour red as a base. 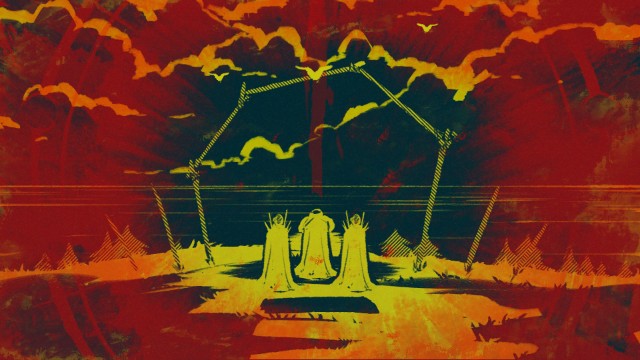 Anyway, then god talks to me. 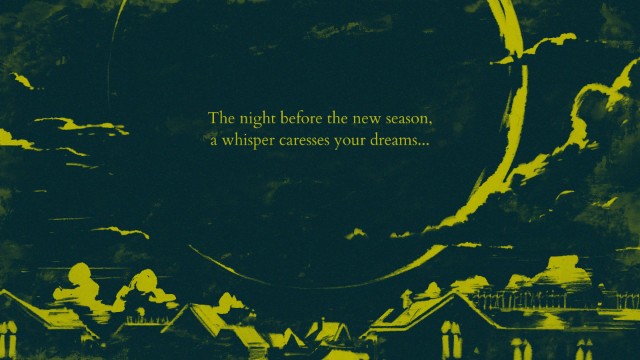 God, or ‘Chernobog’ to friends, has two tasks for me this season. One, I should ‘encourage Discipline’. And two, they request ‘the Artist one… give her to me!’

It’s the early days of summer. The village’s ignorance is terribly low, and I’m warned to raise it by the end of summer… or else. The village’s discipline is also in the red, but that’s less a factor of the value being low and more a factor of the vertical bar suddenly having jumped forward — I don’t know why, but I feel I have Chernobog to thank for that. I’m not put on blast for that one, but all the same, I can feel the disapproving eyes.

House Kegnni glares at me in the streets. Knowledge runs rampant, and discipline is faltering. I need to put together a team of advisors to raise both values, increase house Kegnni’s approval of me, and keep everyone else happy as well, and if possible I should root out ‘the artist’, and bring her on the team — and under the sacrificial knife. It’s a daunting task. And this is only the second season of the first year of five. Will I make it to the end?

Only one way to find out.