Yeah, I didn’t think so either. 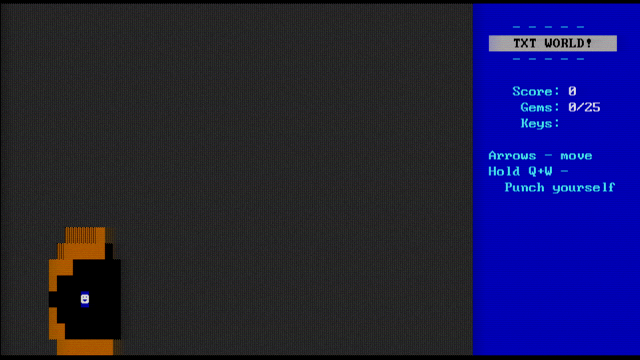 It was worth a shot.

Real quick check: We’re all on board with this joke, right? Everyone knew what I was going for at the start? If, er… if for some reason you didn’t, then I’m going to have to apologize: This must be the weirdest possible way to discover that Glittermitten Grove is actually the shell game that houses Frog Fractions 2, the long-awaited and highly-storied sequel to 2012’s internet darling Frog Fractions. Early in the development process, Frog Fractions developer Jim Crawford announced that Frog Fractions 2 wouldn’t be ‘released’ as normal, but would instead be hiding in some other, unannounced game, until such time as that ‘the jig was up’. What followed was an immense ARG, a hunt for a game that might or might not exist yet that spanned years, media, and dozens of other involved games. It was quite the thing, even to watch from a distance; You really should have been there. 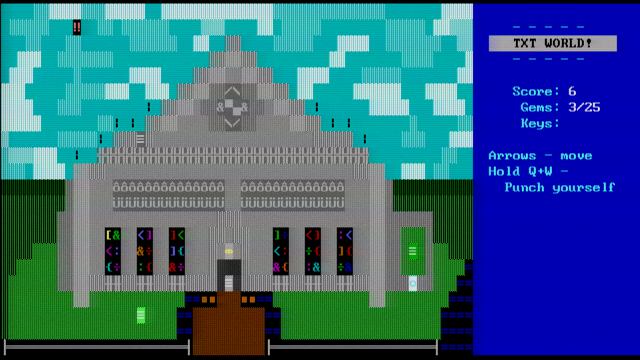 You have no idea how much I’d prefer to not have to write that line.

I actually played Frog Fractions 2 fairly quickly on release: My screenshots are dated between January 2nd and 4th. But while I was partially planning to review Frog Fractions 2 shortly after, playing through it left me… I don’t know, ambivalent, mostly. Just unenthused. I made an early attempt at reviewing, but that didn’t really go anywhere. I didn’t know what I wanted to say yet. Yes, that’s my story and I’m sticking to it: It took me almost eleven months to coherently compose my thoughts on Frog Fractions 2.

Here’s the thing: Of course Frog Fractions 2 had an incredibly difficult legacy to live up to. Frog Fractions 1 landed the way it did in part because nobody saw it coming, spreading by word of mouth in messages saying ‘dude, you should totally play this, just trust me’. Frog Fractions 2 never had that playing field: In 2016/2017, not only does Frog Fractions 1 already exist, but the whole idea of ‘simple-looking games that reveal hidden complexity in mechanics and story’ has been explored in a lot of other ways, such as the recent success of Universal Paperclips. To really stand out, Frog Fractions 2 would have to be something different: It had the unenviable task of subverting the expectation that it was going to subvert expectations.

It didn’t do this very well. 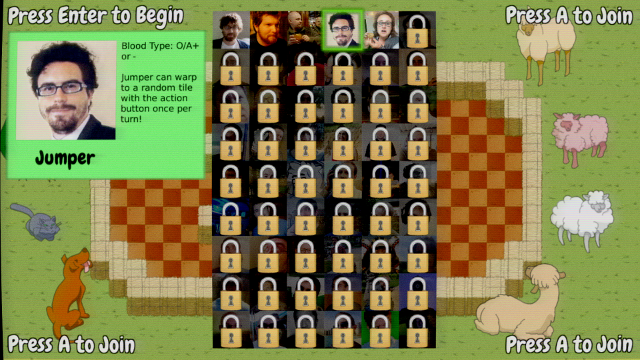 I’ll be the first to admit that a large part of me disliking Frog Fractions 2 is on me. After getting ‘past’ Glittermitten Grove, Frog Fractions 2 puts you in what I assumed would be ‘the second part’: An ASCII-style top-down adventure that’s mechanically Legend of Zelda-inspired and visually Nethack on LSD. ‘TXT World’, that’s what it’s called. I initially didn’t like this at all, but then I have a viscerally negative reaction to ASCII-art games, which I can’t see as anything but cargo cult game design desperate to recapture the experience of older genre-defining games without understanding the technological and social contexts that those games existed in and the ways those contexts are different now. But that aside. If TXT World had been a short bit, I probably wouldn’t have minded much. 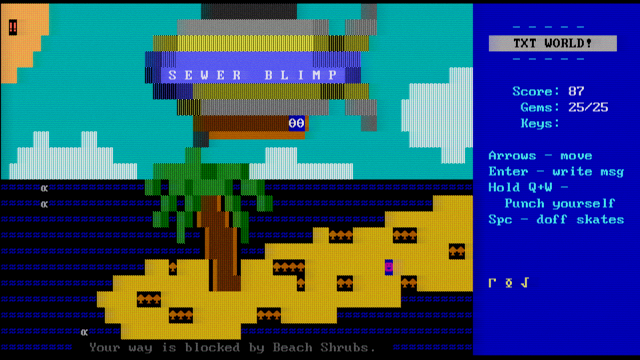 And, in fairness, it does some *really* neat things with ASCII art.

But two problems emerge. One immediate, and one longer-lasting.

The immediate problem is that TXT World isn’t a short bit, and it doesn’t end quickly, or at all. Instead, TXT World serves as something of a ‘hub’ for what will be the rest of the Frog Fractions 2 experience. Hidden around this rainbow ASCII hellzone are about a dozen other games, which you travel around trying to find. As you do, and play and beat those games, things happen: Maybe the world changes around you, or maybe you gain access to new tools that let you get into new areas. Maybe you get a sword, useful for cutting brushes and fending off gorillas. Maybe you find a portable bridge, which you can use to move past walls and impassable barriers and escape what you thought were the boundaries of the map. 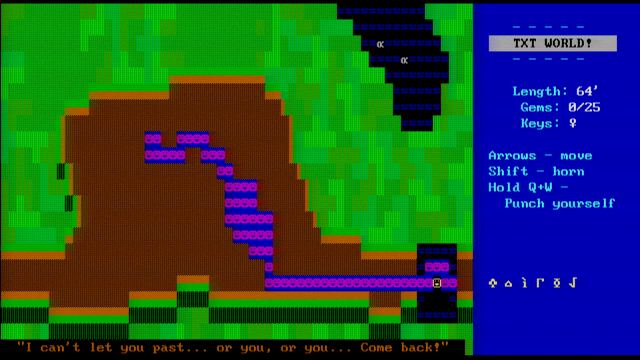 You know, as can happen.

The side games themselves are… fine, generally. Tending towards the weird in a way that feels a little too reminiscent of Frog Fractions 1, but then that might be complaining about details. And some of the ideas on display are generally interesting. Like a Flappy Bird clone that’s also a clicker game, so the height of your toaster — you’re controlling a toaster here, try to keep up — is determined by the amount of money you have. Or a Sierra-style text adventure about pestering out your roommates, the Xenomorph from Alien and the Slenderman. Or Dante’s Inferno, the crime noir text adventure. 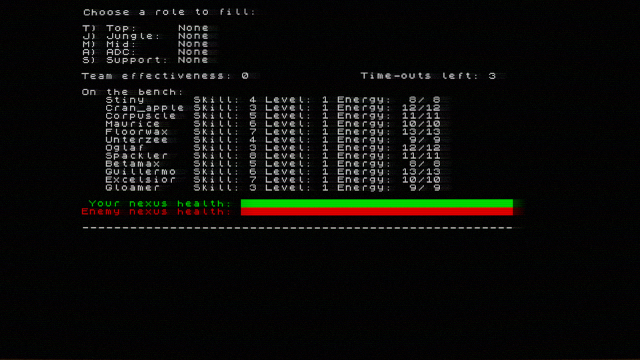 ‘League of Legends Manager’ was definitely An Idea.

But every time you beat one of these, you’re kicked out of an interesting new gameplay idea exploration and into TXT World. Boring, ugly, overly familiar TXT World, where all you do is desperately hunt for the next actually fun thing to do. Even in the cases where the overall world metaphor is shook up, so that you’re playing Snake now or there are cops now or the world itself is shaking apart, it’s hard to escape the notice that you’re still playing the same ASCII adventure and it hasn’t gotten any better since last time.

But okay, fine, again: I get that not everyone has to fight the urge to wear triple-stacked sunglasses when confronted with ASCII art. The fact that TXT World is the beating continual heart of Frog Fractions 2 is the immediate problem, and one that I can see better-adjusted people overcome with time. The more long-lasting problem is that none of it makes intrinsic sense.

Here’s another The Thing, distinct from the first time I said ‘here’s the thing’: While Frog Fractions 1 has sort-of entered the public consciousness as ‘that weird game with all the random stuff’, it’s actually surprisingly coherent on a replay. The things that happen it in are unexpected, and definitely genre-defying, but there is a clear internal logic at play. You collect fruit, which lets you buy a warp drive, which lets you go to Bug Mars, where you go to Bug Mars court, where you hunt for an ancient space ship… It’s not hard to explain in hindsight why a player takes the actions they’re taking, and in every segment it’s generally fairly obvious what you’re trying to achieve and what you should strive for. Get Fruit, Fight Bugs, Get Elected President, and so on.

Frog Fractions 2 lacks this internal logic. Playing Frog Fractions 2 is an endless sequence of traveling around TXT World, not to reach any particular goal, but to find the next part of the world where you can activate a Mind Stone and play a new minigame. Whereupon you find… something, another inscrutable ASCII symbol that may or may not have a different colour from the others. There’s no overall goal here: Remember that the players gets to TXT World by clicking on a random door in Glittermitten Grove. An overall objective is never established: You’re not ‘trying to get home’ or ‘finding the hidden treasure’ or ‘slaying the dragon’ or ‘overthrowing the fairy queen’ or ‘modernizing Fairy World’s obsolete sewer system’, or any of the dozen things I could make up. You’re just going. The only goal in playing Frog Fractions 2 is to play more Frog Fractions 2, until such point as the game tells you that there is no more Frog Fractions 2 to play. 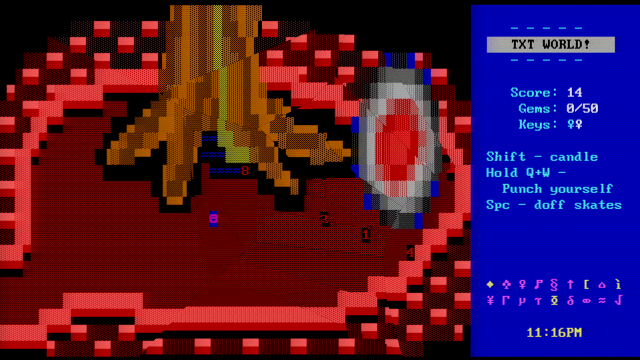 You’ll… you’ll know it when it happens.

My strongest recurring memory of playing Frog Fractions 2 is one of frustration, of muttering ‘okay, now what do I do?‘. It’s hard to overstate just how much the overall experience is hurt by having the heart, the connecting tissue of the entirety of Frog Fractions 2, be this ugly, unintuitive, unengaging ASCII hellzone. It’s not that there’s nothing about Frog Fractions 2 that is in and by itself good and fun, because there is. It’s just that that never gets a chance to shine, buried as it is in TXT World’s endless muck.

For instance: Near the end of the game, you run into what’s essentially the final TXT World puzzle. The final key that you ‘need’ — i.e. the only one you haven’t found yet — is across a stream of water, next to a frog. The only frog in the entire game. It’s at this point that the game reveals why you’ve been collecting obscure symbols the entire time: Each symbol you found represents one noun or verb, and you can combine these to talk to the frog, convincing it (in an elaborate series of steps) to throw the key to you. 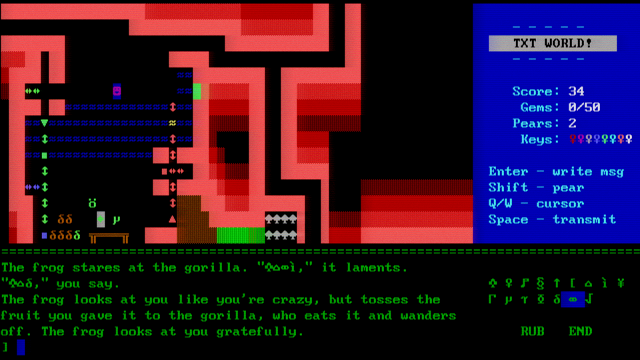 This is a cool idea! I like it a lot, in principle: It’s clever, unique, and it tests in a direct way how much you’ve been paying attention to everything that came before. If this puzzle stood alone, I’d praise it. But it doesn’t stand alone: Your ability to do this puzzle depends not only on whether or not you can read the symbols, but also on whether or not you’ve found them. Which means this puzzle tests very directly if you’ve scoured TXT World, far beyond the limits of what the game even seems to suggest is necessary, and if you’ve completed every minigame in the particular way it wants you to complete it — which isn’t always as straightforward as getting to the finish. Not, of course, that it tells you this explicitly: If you’re like me, and you miss an absolutely critical verb, it might take you a while before you realize that the fact you’re allowed to do this puzzle doesn’t necessarily mean you’re capable of doing this puzzle. It might take a long, increasingly frustrating while. And then you start looking for guides already. Wait, I was supposed to do what with that bridge? And the gorilla? How in the…

It’s hard to appreciate the good bits when the game itself tries to hard to bury them, is what I guess I’m trying to say.

Once more, for the final time: Frog Fractions 2 isn’t necessarily a bad game, or unworthy of your time. It has some interesting ideas, it does a few neat things with ASCII art, and I can’t say it didn’t defy my expectations. It just isn’t a game on the same level as Frog Fractions 1: The pacing is poor, the player guidance is lacking, and more than its predecessor it seems to believe that ‘random things happening’ is intrinsically funny, instead of being funny because specific expectations are defied.

All in all, I think I preferred Glittermitten Grove better. 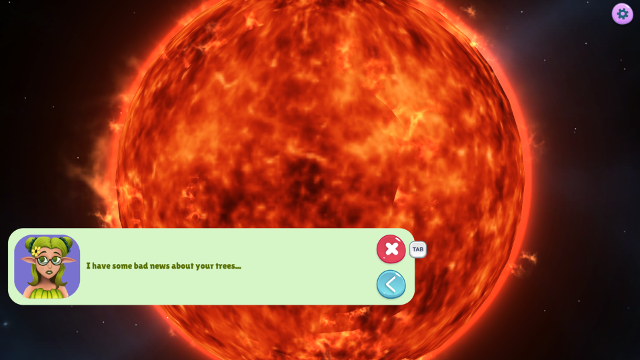 But then they do say you can never go back home.

If you’re willing to see for yourself whether or not I’m full of shit — who knows, maybe I’m just trying to keep this good good game all to myself — Glittermitten Grove runs about twenty dollars on Steam. Frog Fractions 2 is in there; keep digging, literally. Just don’t come to me when your eyes ASCII over and you can’t find the last golden delta.

Jarenth needed eleven months to get over his disappointed grump. Mock him on Twitter or hang out with him on Steam, because you know you want to. And if you dig Indie Wonderland and Ninja Blues in general, why not consider supporting our Patreon campaign?