I’m not afraid to jump back in time sometimes. Sure, Mostly Tigerproof‘s Glittermitten Grove came out veritable ages ago, in the heady closing days of the Horror Year 2016. And sure, the Hell Year 2017 has had so many incredible and hotly-anticipated game releases that I’d run out of my word count trying to list them all. But listen: Sometimes you just have to play a weird-looking game about building fairy villages.

I’m gonna be honest: I don’t really know what I was expecting when I launched Glittermitten Grove, but this is pretty much it. Happy music, bright colours, buttons that look like they’re made of plastic and that may or may not be straight from a Unity Asset store. 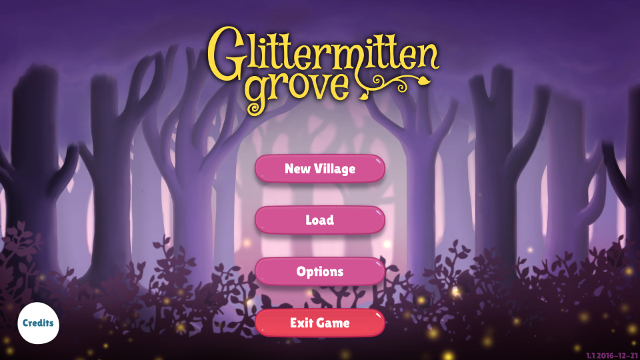 We’re off to a strong start.

See, the key to any gaming experience is managing your expectations. If I’d been expecting anything like a deep simulation out of Glittermitten Grove, I might have been disappointed at the absolute bare-bones options menu. But I didn’t, so I’m not! Instead, I’ll say that these cool sliders look like they’d work very well in a mobile game for children, probably something designed primarily for tablets. 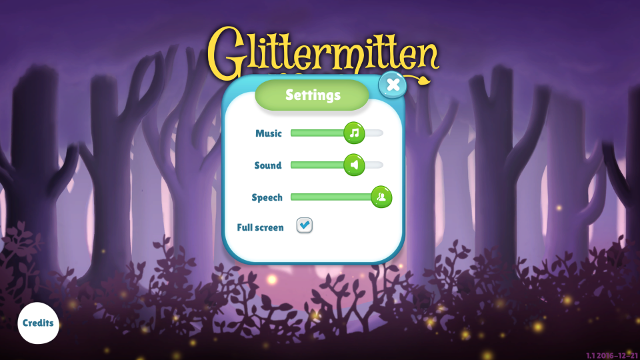 Perfect for manipulating with your fingers when you can’t find the stylus, *again*.

And so, instead of doing that, I make the daring choice — to start this game as quickly as I can. Let’s make a town for fairies already! 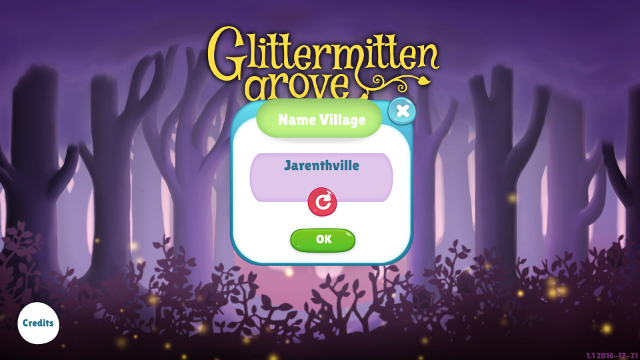 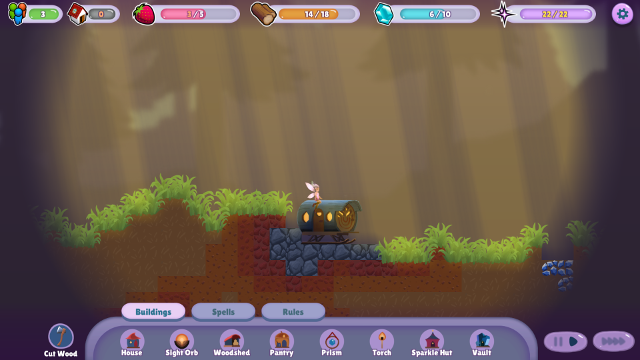 Well, this is certainly a start. I was promised fairies, and fairies I did receive. And I guess this wooden-log-on-sleds trailer house can sort of pass for a town…

I have about three seconds to try and take everything in, and then suddenly and without warning some sticks from the ground. They rapidly grow up, and then grow leaves and flowers, leading me to conclude that these might be plants, or trees. Also, I can click on them and see that they are. 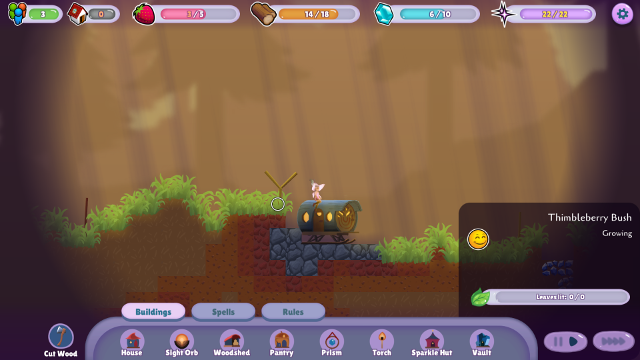 I have no idea if this is supposed to be a weed joke or not.

As the plants grow and the light changes, I muck around in the world somewhat. The interface on top of the screen seems to show how many resources I have. I have three fairies, but zero houses, three out of five strawberries (or ‘food’), fourteen out of eighteen wood, six out of ten crystals, and a full complement of 22 ‘sparkles’ which apparently power magic. The UI at the bottom seems to suggest actions I can take. I can build things like houses, woodsheds, and pantries, I can cast certain spells, and apparently I can muck with the rules of what resources fairies are and aren’t allowed to pick up. It’s a little under-documented, but I’ve got enough background in games like these to make heads and tails of it — I won’t be controlling the fairies directly, but instead providing conditions and setting objectives. The presence of a notable ‘Cut Wood’ button in the bottom left suggests this as well.

But what should I be doing? 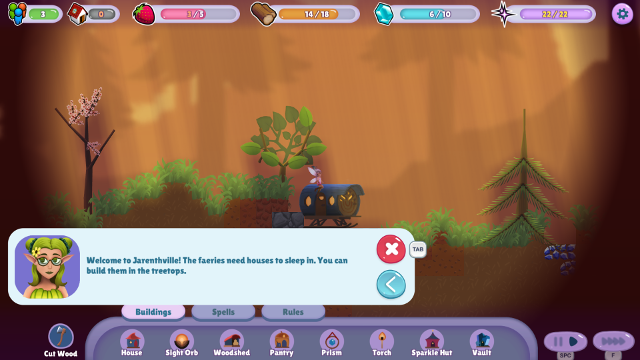 Suddenly, and seemingly as if to answer my questions, a tutorial activates!

Houses, huh? Those cost six wood apiece, meaning I can build two right now. I try placing one on the ground at first, but nothing happens; I learn through trial and error that the house outlines only show up on particular parts of the plant and tree branches. The branching parts, specifically. I guess that makes sense: What self-respecting fairy would want to live on the ground?

I place one house, then another, then a third. Wait, I didn’t have enough wood for three! But my fairies don’t care: They simply start working on all three houses at once. Pretty soon, two are done, and two of my three fairies can take a nap for the night. The third one is shit out of luck, so I quickly designate some tree branches they can cut off — using the same branch-selecting logic as the building. 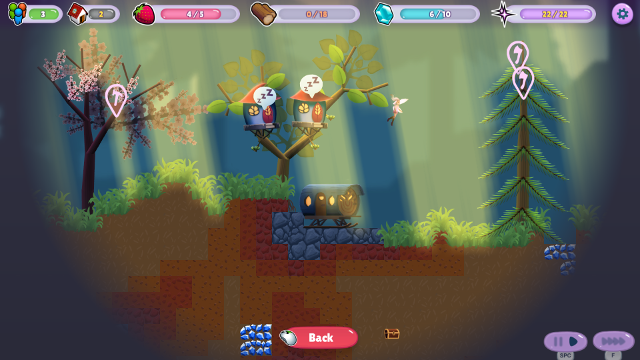 Pretty soon, all fairies have a place to sleep. And while I briefly worry about food, it turns out that the plant most of my housing is built on is actually a fruit-bearing tree! How convenient. So, what next?

‘Try building a Sight Orb,’ Tutorial Fairy helpfully suggests. That should let me see around the camp farther, potentially identifying… more cool things? I don’t know. But at any rate, I happily select the option, then place the orb on one of the highest branches of my fruit tree home. Equally happily, the fairies drag the last of my cut wood towards the build site, quickly materializing the orb in the form of a glowing acorn. The orb springs to life and briefly highlights the surrounding area, and then the branch it’s on breaks off with a snap and my precious orb tumbles to the ground. 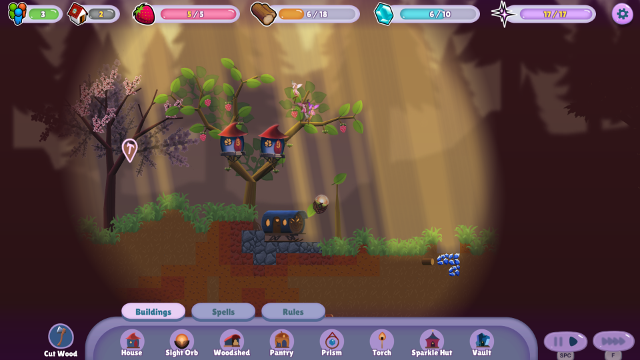 It turns out that not even fairies are immune to *physics*.

Good, this is disappointing, but no worries. I order the fairies to cut down the whole third tree, just all of it, and use part of that wood to build a new sight orb to the left — preferably somewhere sturdy-looking. Then, using my mighty magic and also some tree seeds I found, I plant a new tree where once the old one was. I make sure to put it directly in a beam of sunlight: An earlier wild tree that tried growing underneath Fruit Home died quickly after receiving no nourishment. 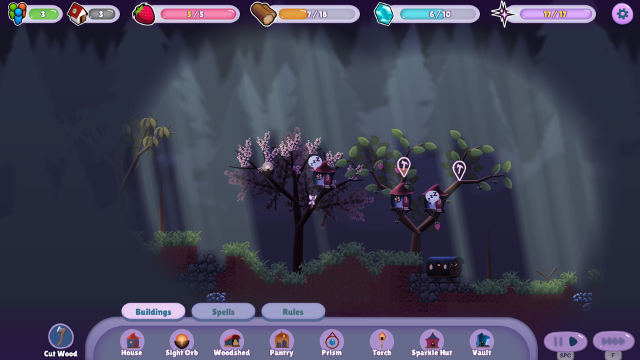 A hard day’s work, all fairies relax for a nap.

Pretty soon, two new fairies show up. They’ll need new houses, which means I need more wood. And since my wood storage is so limited, I should also consider building a woodshed. And since I’ve used Fertilizer magic on my seed, quickly growing it into a second fruit-bearing tree, I’ll need to replenish my Sparkles. I can do that by building Prisms, which convert sunlight into Sparkles, but building those takes Crystals. And I should also keep expanding my sight radius, for new sources of wood and places to build… 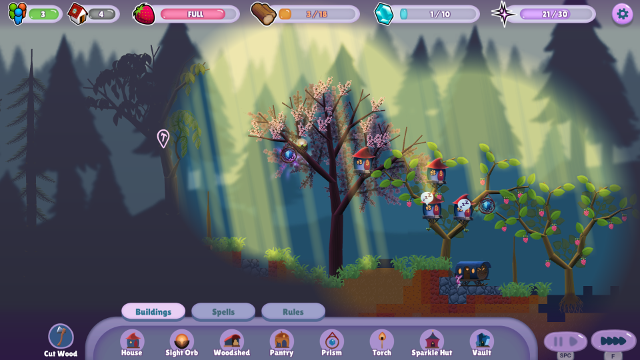 Yeah, I can see how this game’s initial engagement loop works.

It turns out that to get Crystal, I need to blast into the ground with fireworks. Which for some reason is the wildest thing this game has thrown at me? Look at this: 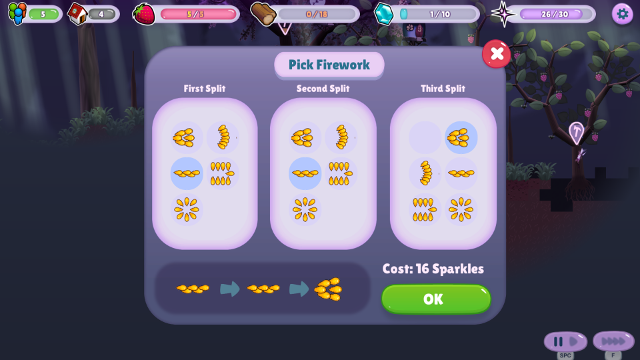 What the hell kind of fireworks are these? 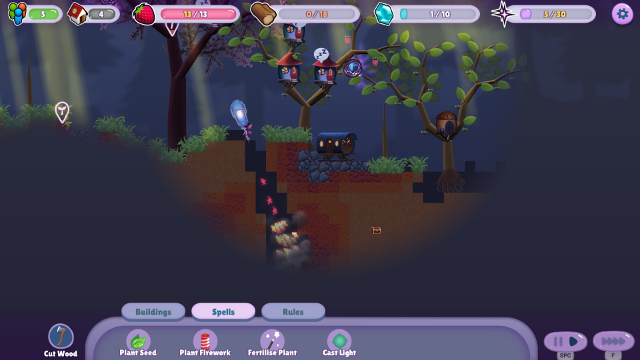 The underground is a source of not just crystal, but also treasure chests, holding wood, food, and… more seeds? Hey, I’m not saying no to more seeds. I actually find new seeds, too, not just the same Thimbleberries. This Jelly Vine seed apparently grows down instead of up? That could be cool, although I don’t see why I’d… 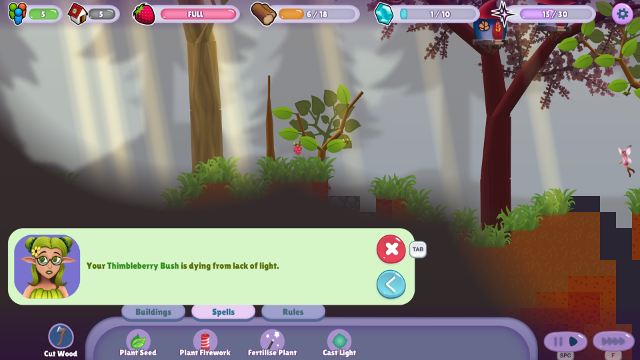 Ah. I planted my precious third Thimbleberry bush between two high trees, and now they’re blocking all the sunlight and chocking the life out of it. That’s, that’s good.

Man, this game is secretly a lot more complicated than it lets on. The resource management in and by itself is quite the thing, but the much trickier aspect is managing your trees. They grow in real time, in whatever direction they want, and you don’t have any control over that. When I put down this berry bush, the area I chose was still pretty much covered in sunlight. And the Prism I hung up used to be straight in a sunbeam, but the tree it’s on has grown so far to the right that it’s actually leaning over, dragging the prism out of position — and potentially putting two houses and three woodsheds in danger of collapsing. I start to question the wisdom of building everything tree-side. 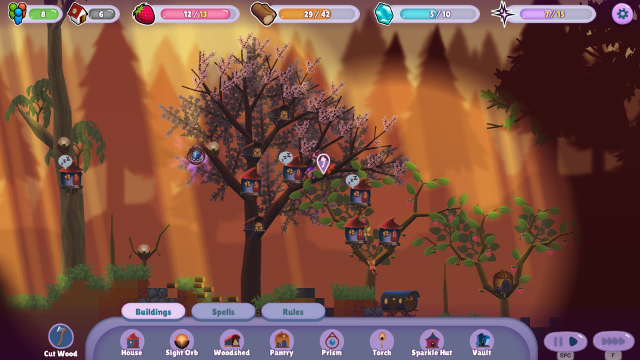 Though I guess I have *some* control over this process. 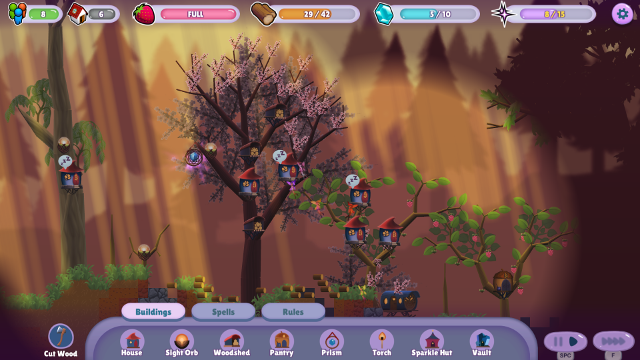 I’m gaining a new respect for the work of gardeners.

In general, though, all goes well in Jarenthville. Expansion proceeds at a steady pace, with eight fairies already calling the town home. The construction of a lavish fairy palace might up that number even more. We’ve got a decent supply of food and sparkles, sight on a number of tree branches we can cut for wood, and more than enough crystal deposits underground to fuel our magical economy. 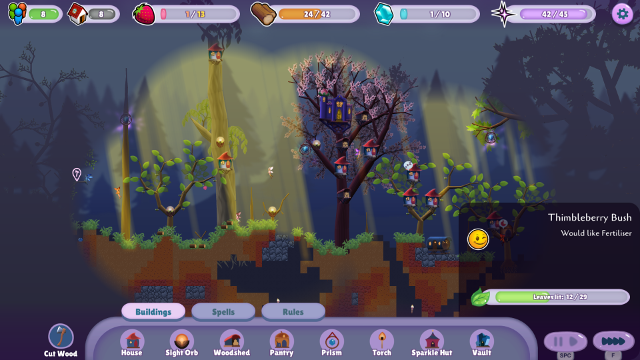 As far as fairy towns go, I’d call this one ‘pretty booming’.

I don’t see how anything here could go drastically wro-

Suddenly and without warning, winter sets in. 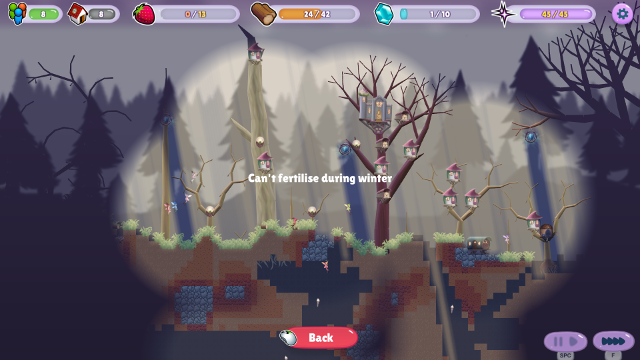 Yes, okay. This is suboptimal. Because it’s winter, my food-bearing plants are currently not bearing any food. And since we don’t have any stockpiles… what happens next?

What happens is that my fairies start leaving. Ungrateful hungry pests. One by one they fly off in search of better-nourished pastures. I go from eight, to seven, to six, to five… There’s a brief resurgence when fairy #2 comes back with a small handful of extra food, but that doesn’t even last us that long. Pretty soon I’m down to my last fairy. Is this the end of Jarenthville? 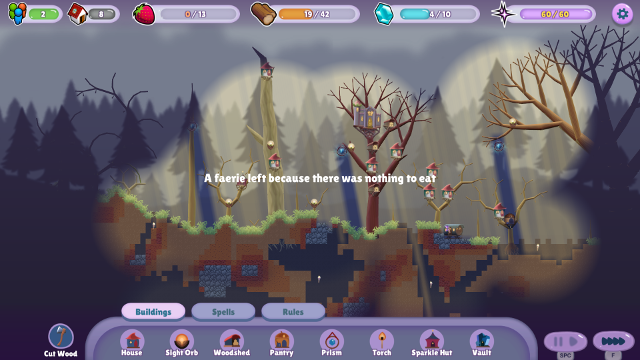 It’s not looking good, I’ll tell you that much. 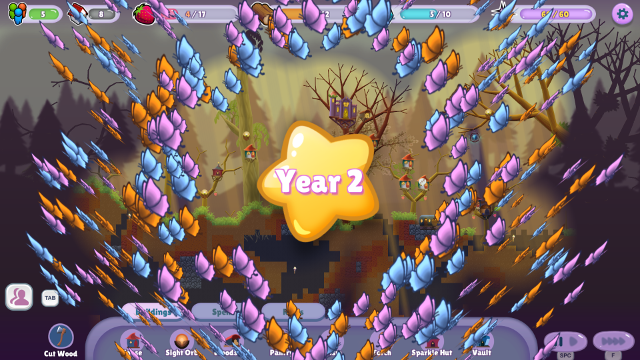 Could have gone better, could have gone worse. But I’ve got the hang of this game now. In no time, Jarenthville is back to being a bustling fairy metropolis. Soon I’m up to 10 fairies, then 20… my fairy palace grows steadily, the new plants I find underground provide new sources of food, and with production rising higher than consumption, my newly-built granaries are stuffed to the brim when the next winter hits. 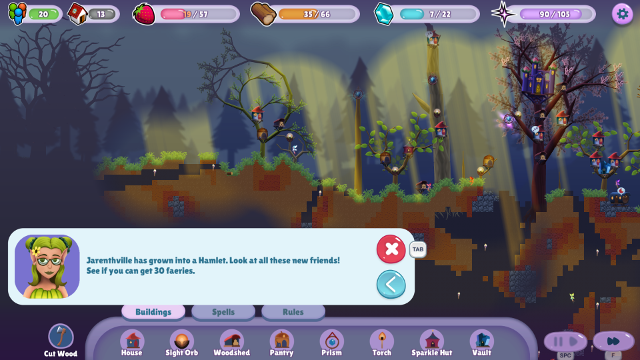 Pictured: Year 3. The elements have nothing on me anymore.

Yup. Got this game’s number now. I’m gonna play a little bit more just to be sure, see if I can’t get up to 30 fairies or so, but I’m convinced beyond reason that what I’ve shown you here is genuinely the full and total content of Glittermitten Grove. Which means you can stop reading the review, honestly: It’s highly likely there just won’t be anything on the second page. 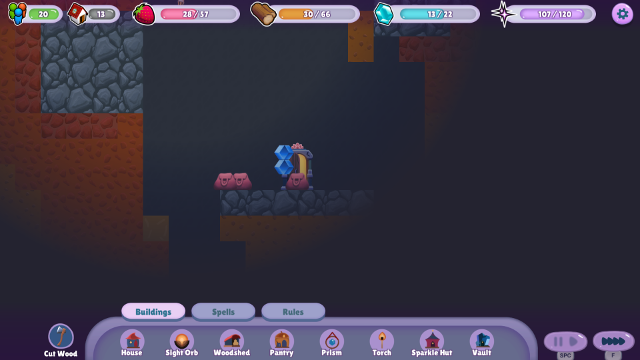 Whatever this weird door is, it’s probably nothing.

So, see everyone next week then? Everyone agrees that’s how we’re doing it?