Tequila Works‘ The Sexy Brutale has received tons of critical praise since its release in April of this year. I’ve watched and read a small number of non-spoiler reviews, all of which impressed on me how good this game supposedly is and that I should play it as soon as possible right away. It’s been on my games-I-intend-to-play-and-review list for a while now. I’ve owned it since June. I just didn’t get around to it. 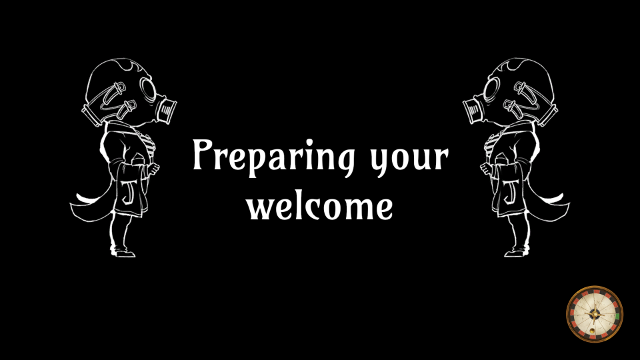 Well, this doesn’t look ominous at all.

The Sexy Brutale is… welcoming? At the start? On the one hand, the cheerful music and good use of colour in the title exudes a sense of cheerful welcome. On the other hand, the characters on the title radiate less that and more ‘distorted nightmare horror’. 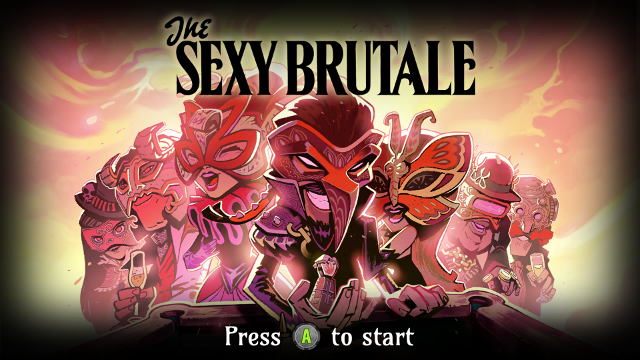 ‘Welcome to the Sexy Brutale! Which is apparently a gateway into *the Horrorzone*.’

Now, I know what you’re thinking. I’ve let this game sit fallow for an unconscionable number of months: Am I really going to spend any more time than strictly necessary babbling about menu options? In one sense, yes, that is exactly what I will be doing. But in another, more accurate sense, no, because there’s really nothing to talk about. Apart from a very default set of graphics and audio options, and a hardcoded set of controls that seems to strongly suggest I grab my 360 controller, The Sexy Brutale doesn’t really have anything to play with. The single most significant choice is which of the five save slots I put my game in, as they all have different background images. 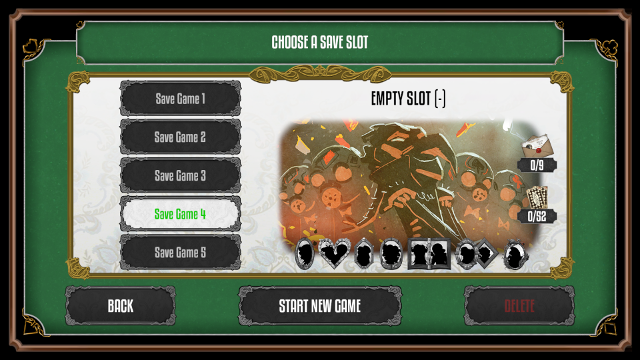 So yeah. You guys want me to get started quickly? Is that what you want? Well then, let’s get started! 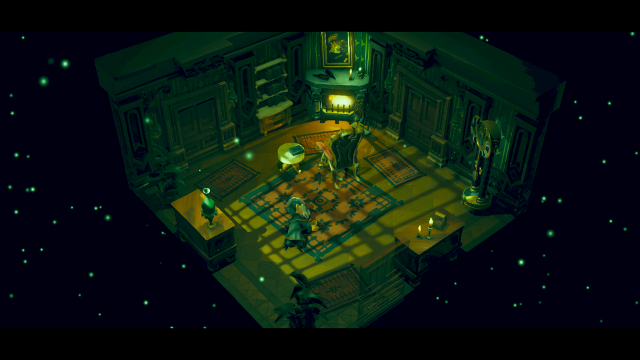 This is what I learn before opening up on a sleeping man a small green room. The titular Sexy Brutale is a casino, owned by the enigmatic ‘Marquis’, who throws extravagant masked balls every year. But something’s different this year. And I, Lafcadio Boone, should probably find out what that is and why.

And then, the room. I assume the sleeping man in there is the aforementioned Boone. He’s… not doing much. I try wiggling my analogue stick a little, but noth-

The screen goes black for a second. When the room comes back into view, standing with me in the small room is a horrible-looking woman, seemingly lacking skin and with viscera for hair. 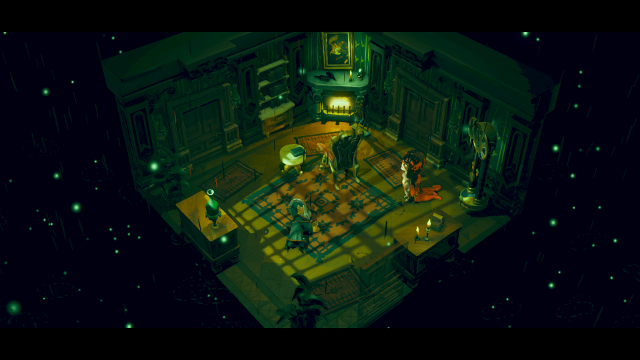 The woman walks towards me and touches my face, which catches fire. Or maybe I’m wearing a mask, and that’s what’s catching fire right now. While still attached to my face. 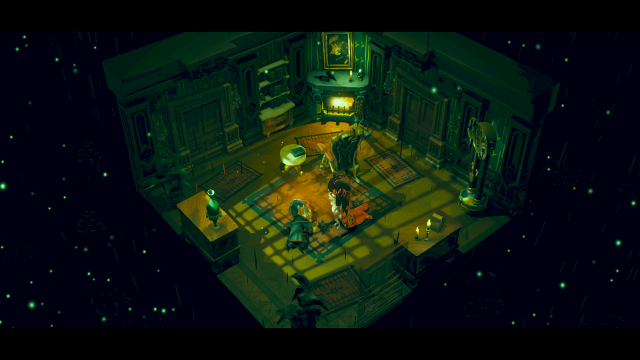 Not my situation of choice either way.

The woman tells me a disjointed story. What she’s just done will “give me a chance. Just a chance.” And she’ll “help me”, as I am “not weak”. But “he’s strong, so strong”. Then she melts into a puddle of blood. 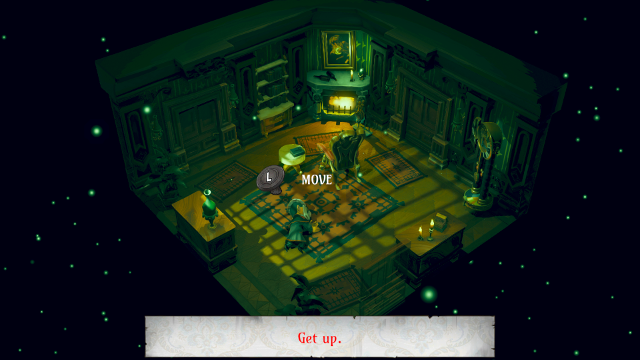 Credit where credit’s due: I really sympathize with Lafcadio’s waking-up animation. He doesn’t just ‘get up’: He slowly crawls up, as if waking up from a terrible dream and/or an incredible hangover. He stumbles to his feet, uncertainly, and feels at his face — is that a mask on there? With a bloody handprint? Call me old-fashioned, but I appreciate it when my player character is expressly just as much in the dark about all the weird shit they’re going through as I am.

What follows is a mostly linear tutorial about snooping. First, The Sexy Brutale directs me to go through a door, so I walk up to it and press A, as instructed. The scene shifts to a hallway, and the game tells me to walk up to another door — but to press X this time, spying through it instead of walking in. Doing so reveals a second hallway, where a stressed-out man with a weird clock mask is pacing anxiously and muttering to himself. 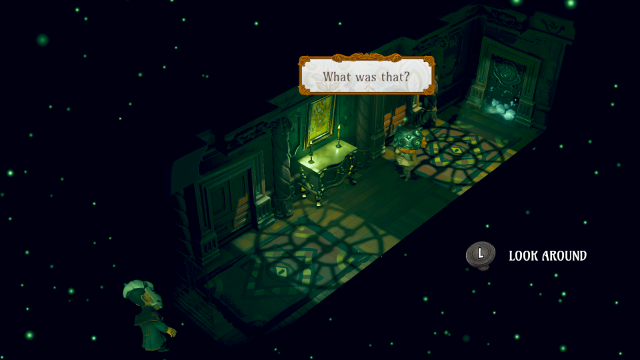 Two things. One: I learn through osmosis here that important characters have speech bubbles with different-coloured borders, as the scary blood-woman’s text borders were red. And two: This character is *incredibly* relatable and I wish I was him instead.

Instead of peeking, I can also use the right trigger to ‘listen’. This reveals that Lafcadio is apparently part bat. 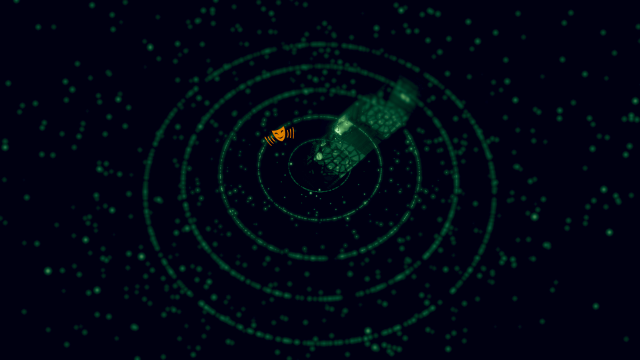 It reveals nothing much else.

The anxious clock man runs into a different room, so I enter the hallway he was in and spy on him as he rummages through a safe. He then leaves through a different exit, so I spy once more through a door at the end of my hallway, which apparently opens on some opulent chapel.

Events go in quick succession. The clock man loudly curses out some man called Lucas. Dramatic organ music plays. Then, from the right, an unseen character with grey borders interrupts. Some banter is exchanged, some threats are made, and then a shot rings out — and clock man slams backwards into the stained glass window, dead. 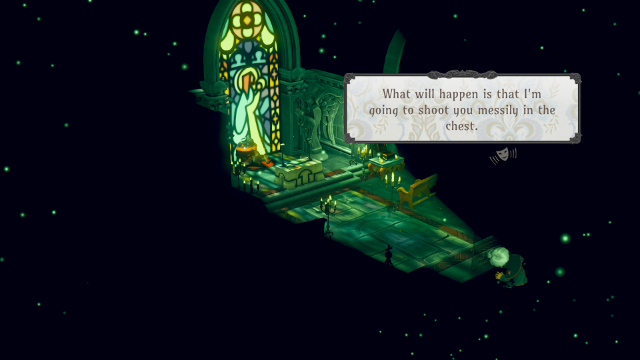 At which point his unseen assailant quips about killing him, to the benefit of nobody in particular.

Then the world resets, and I wake up in a different room. 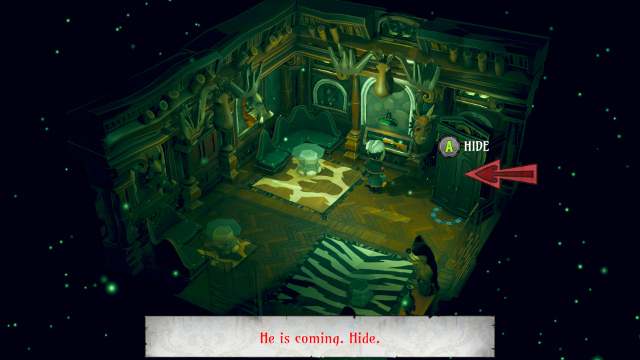 I have a fraction of a second to parse what just happened before *danger strikes*.

The same events play out from a different perspective: I watch as a man in a grey skull mask walks into the room, grabs the gun on display — still loaded! — and walks towards the chapel. Spying from a different door, I now clearly see that two-of-diamonds here shoots and kills the clock-mask man. He then walks back in the room I’m in… 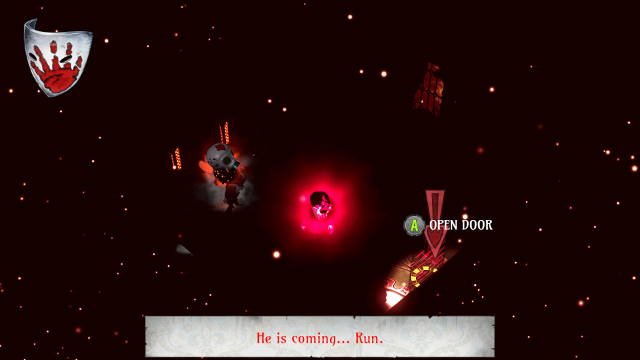 Don’t panic! Nobody panic. Sure, the room goes black, ominous music starts playing, and two-of-diamonds’ mask floats up from his blackened ethereal head and slowly hovers towards my face, which is now wreathed in red fire. But, er… I can flee!

Once safely out of the room, the scary woman informs me that yeah, that’s the way things are going to be around here. I can’t be in any room with anyone wearing a mask, be they guests or creepy staff. But, upside: None of them will see me if I do get ‘caught’, and once I leave, they’ll just resume their business.

Furthermore, she informs me, the man I just saw murdered is called Sixpence. All the guests in the Sexy Brutale are victims, with all the staff the murderers. It’s up to me to stop those murders from happening, starting with ol’ Sixpence back there. Which seems difficult, given that he’s already been murdered. But then we did see that event twice in a row already. And, sure enough… 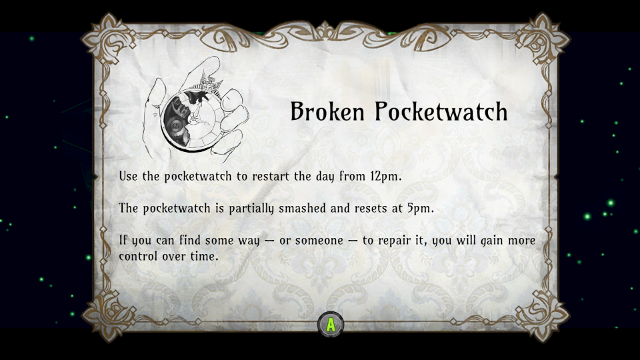 Ah, time travel. Solution to AND/OR cause of all of man’s ills.

My first attempt goes… poorly. Not in that I mess anything up, but really that I don’t. I have a limited map, so I spend my initial hours mapping out the hallways of this slice of casino. But time flies, and before I know it, the clock strikes four — handily marked on the watch as the exact time the bullet strikes Sixpence. 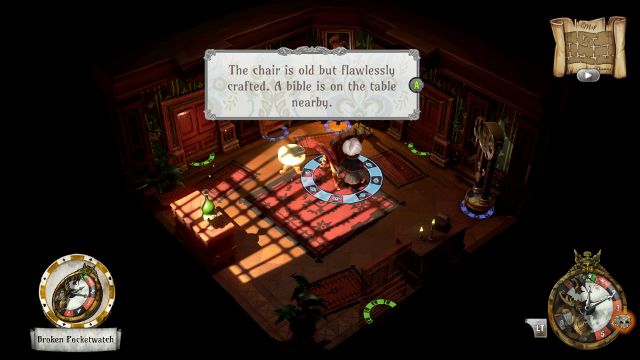 I spent so much time looking at random knick-knacks, you have no idea.

So the second time, I decide to stick with what I know. Sixpence! He’s obviously trying to achieve something. In fact, doesn’t he start off the day by rummaging through a safe in the room right next to time? I peek, and peek, and peek…

Aha, jackpot! One of the things Sixpence carelessly throws out of the safe is a blank bullet! Yes, I know what to do! I run to the room with the gun… Where was it, where was it… 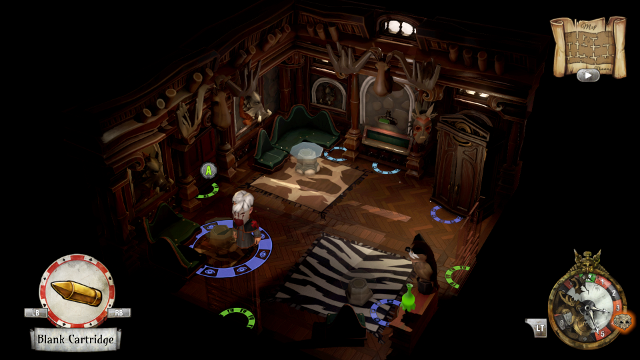 Alright. In take three, I take the blank as soon as I can, and then make a beeline towards the gun room, which currently still has the gun it it. I approach the gun, use the left and right bumpers to select the blank cartridge, and press Y to ‘use’ it. Lafcadio slides the blank into the gun. Success! Now to quickly hide…

No need, even. As soon as I solve the gun puzzle, The Sexy Brutale switches to cutscene mode. I watch the assassination attempt from before, in full view this time. Things play out as before, except when the fatal shot is fired, it instead isn’t. And as the staff member confidently babbles to himself about ‘Plan B’, Sixpence grabs a nearby candlestick and chucks it, with remarkable accuracy, right at their dumb mask. There is a crack, and a thud, and the future is officially different.

Sixpence takes off his mask, which is officially my cue to come in — he’s no longer haunted by whatever bound him. We chat a little, he leaves, and — well, long story short, I eat his mask. At the behest of the bloody woman. It gives me new powers over time, which is to say, a greater affinity with the grandfather clocks that dot the casino. 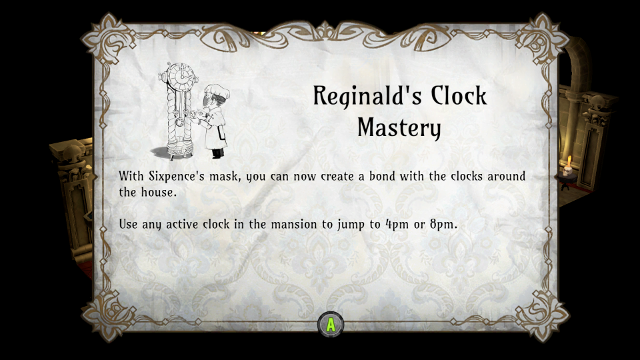 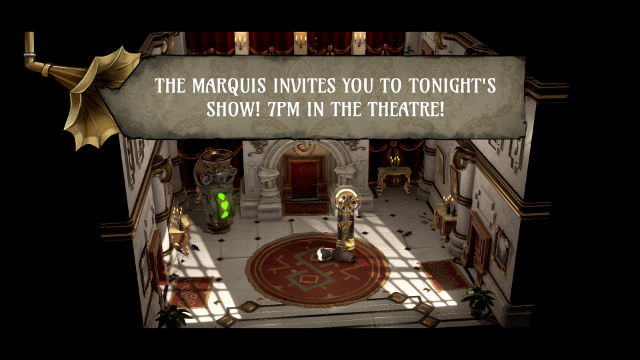 If it feels like I’m deliberately jumping over details here, that’s because I am: It’s obvious already that this will be a spoiler-sensitive game, and I don’t want to give away more than I strictly already have. Here’s the gist: It’s up to me to save a number of guests in this casino, one at a time. They won’t stay saved: Win or lose, time resets at the end of every day, putting me back at the last clock I interacted with. But by saving guests and obtaining their haunted masks, I should slowly be able to work myself towards my ultimate goal: Understanding just what is driving this cycle of death, the darkness at the heart of the Sexy Brutale, and putting a permanent stop to it.