Yeah, I didn’t really think so either.

Y’know, I don’t remember which game first taught me to expect the Simple-Seeming Platform Game Twist. I keep going back to Eversion, which is a fair answer even it if doesn’t so much have a ‘sudden twist’ as a ‘slow creeping realization’. And obviously there’s Frog Fractions, which I already mentioned. I’m sure there are others too, maybe the Flash games of old I don’t remember playing. Whatever the case, it’s an established trope in my mind that ‘if you’re playing a cutesy and simple-looking platform game, there’s about a 75% chance that it’s going to turn complicated or viscerally horrifying about halfway in’.

And Omegaland… There’s not really a way to talk about Omegaland in-depth without spoiling that there is something to spoil, and then, spoiling that thing. If you want to play this game and take things as they come, really, just pretend my review only had one page. The safety tape comes off after the next screenshot! 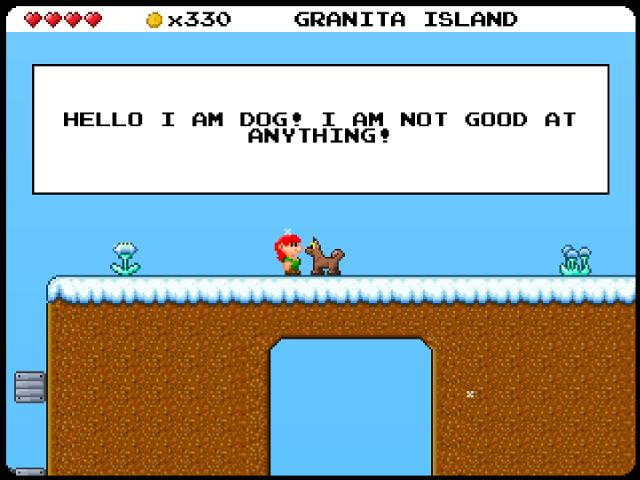 This dog is not good at lying, as you can tell. 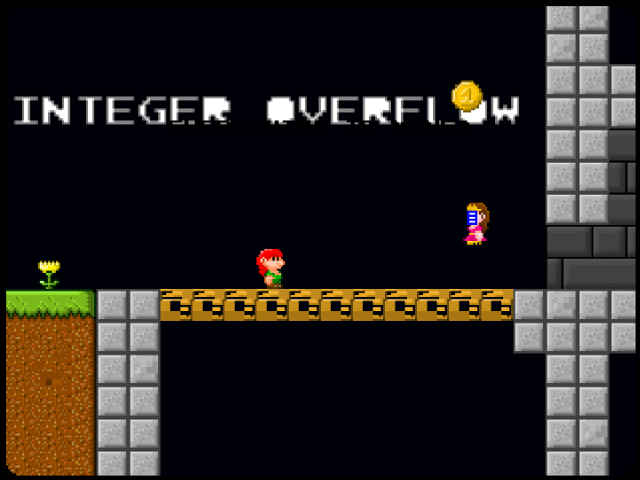 Time to get weird.

For its twist, Omegaland goes meta in the second half: Just when you think it’s probably about over, the world falls apart, in a literal sense as well as a figurative one. Systems are changed, new mechanics are introduced, enemies get warped, old assumptions are overthrown, and everything gets painted with a lovely shade of Glitched-Out Terror Zone. Say whatever else you want about it (and I will), but it’s audiovisually striking — even the once-cheerful menu doesn’t escape. 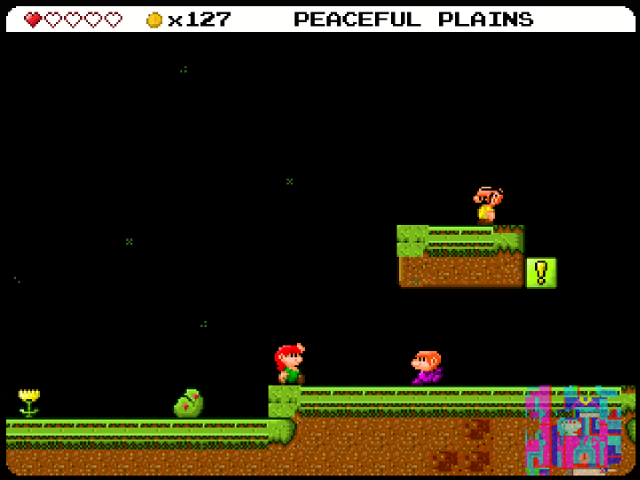 If this game had a higher level of visual fidelity, this scene would basically be Dead Space.

Now, an interesting thing that happens here is that Omegaland goes through a sort of Goldilocks effect. The initial game, pre-twist, is honestly just too easy. There’s quite a lot of it to get through, and some upgrades you’ll want to grind out gold for (if you’re any type of completionist), but it pretty much never gets challenging. In fact, let’s not beat around the bush: Clearing the last couple of Flower Kingdom levels felt like a chore. I did it because I ‘had to’, the sunk effect in full swing. You can bet I had a podcast running in the background.

Then, straight after the twist, Omegaland is really hard. This has a twofold reason. One, a bunch of new mechanics are abruptly introduced. The map is free-roaming now, with the old familiar paths covered in glitch walls. There’s an upgrade system in Castle Alpha, dependent on gold and the new ‘cherry’ resource, as well as on the number of people in the castle that you’ve rescued — that’s something you’re gonna have to do. And while the game is explicit that your new goal is a retread of the old one — ‘go find the five golden keys again, they’re basically in the same place as before’, it’s initially a lot less clear how you’re supposed to go about doing this. 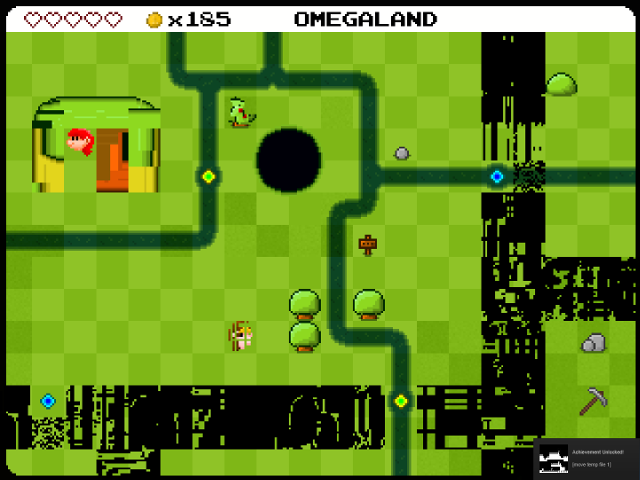 And two, somewhat more pertinently, Omegaland gets pretty unforgiving. While you have a total of five hearts in your meter (and that’s assuming you bought all of those in the Before Time), you start the Glitch Times with only one heart filled out. Meaning you can take only two hits. And, crucially, your hearts don’t automatically replenish, new hearts are rare, and heart status is tracked between levels. If you die in a level, you restart from the beginning with the hearts you had at the start… But if you, say, start with two hearts, lose one, and then finish, your heart total in the overworld (and in the next level) is now one (1) heart. It’s possible, and pretty likely, to have to start levels with zero hearts, meaning one hit from any enemy or environmental obstacle will kill you.

Which in and of itself wouldn’t even be that much of an issue, but Omegaland‘s second set of levels is hard. They’re longer, more lethal, and filled with new enemies and new environmental obstacles — get ready for some I Wanna Be The Guy-level of leering at ‘harmless’ environment bits. Hearts are scarce, enemies have strange movement patterns, and the new unkillable ‘bugs’ will chase you down for as long as they see you. Worst of all, at seemingly random moments (indicated by fun motherboard-speaker-sounding beeps) an ‘Omegaflow’ will start, inverting all colours and causing small damaging glitches to rain down from the sky onto any part of the map that’s not covered by something. You can imagine how much fun it is to be caught in one of those near the end of an open map, no hearts left. 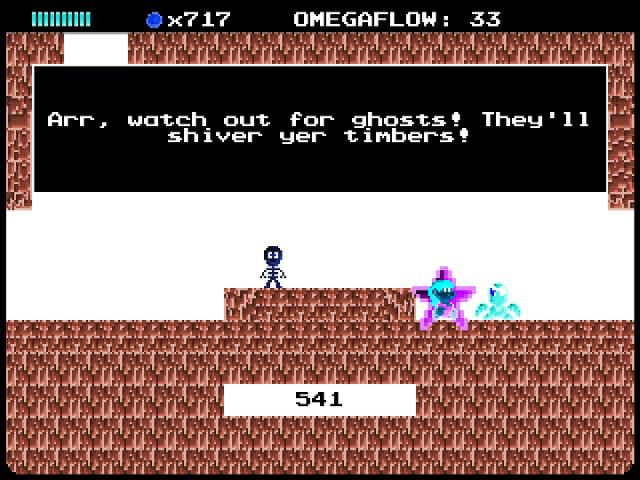 Even when you’re safe, Omegaflows are about a minute of utter wasted time. And that’s assuming there are no bugs around…

Add everything together, and a picture emerges of a frustrating, challenging, uncertain experience. That’s certainly how I saw it. If early Omegaland is too cold, in this Goldilocks metaphor I hope you didn’t forget about, nu-Omegaland is definitely too hot.

But while I was all ready to grumble about the dangers of overcorrecting and then call it a day, the further I got into the second half, the more I had the idea that… maybe this was intentional? 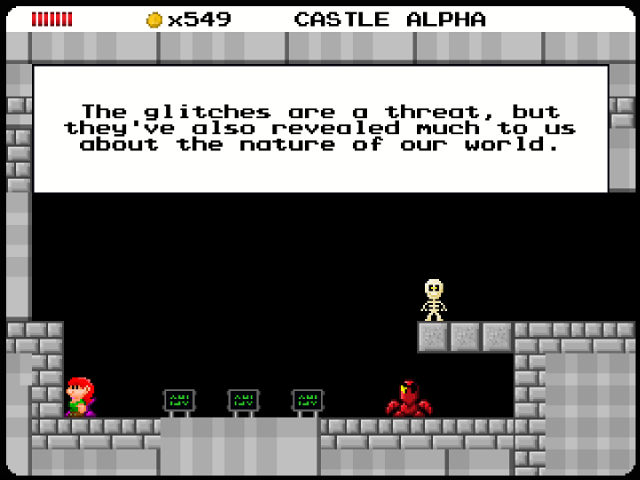 It’s definitely smarter than it first appears — more communist, too.

Thing is, one of the elements nu-Omegaland introduces is an upgrade system. Or rather, several concurrent upgrade systems, all located in Castle Alpha and unlocked once you hit the appropriate milestone. Which are never made explicit, obviously, so it’s easy to miss a lot of these if you don’t constantly explore the whole castle every time you come back. But if you do find them…

It’s tricky to make an upgrade system that doesn’t just feel like ‘+1% to some stat or whatever’ a hundred times over. But Omegaland manages, to a certain degree. The upgrades in this game almost all manage to make the game feel easier, or rather, more manageable. Even the ‘+1 health’ upgrades give you more staying power. But the more expensive ones really put power back in your hands: This one gives a small shield that blocks a few of the roving glitches, this one stocks the castle with hearts, allowing you to regain life whenever you want, this one turns certain items on the world map into health, this one lets you walk through grey glitch blocks to unlock new paths and secrets. It leads all the way up to life regeneration, incredible shielding, and removing most enemies off the overworld, at which point you’re actually in a stronger position than you left the original game from.

And this only works because everything was so difficult to begin with. There wouldn’t be a slow sense of relief and regaining power if Omegaland hadn’t dipped into hellzone territory to begin with. I had the most fun with Omegaland with about a third of the good upgrades unlocked — the ‘just right’ territory, where the game was interesting and challenging without being murderously cruel. It doesn’t quite last: I managed to get my hands on most upgrades with still quite a bit of game left, meaning the final stretch was a little easier again than I would have liked. But between the clever difficulty scaling and some of the interesting things the game does with respect to glitch-art and asset repurposing, I can’t say I wasn’t somewhat impressed. 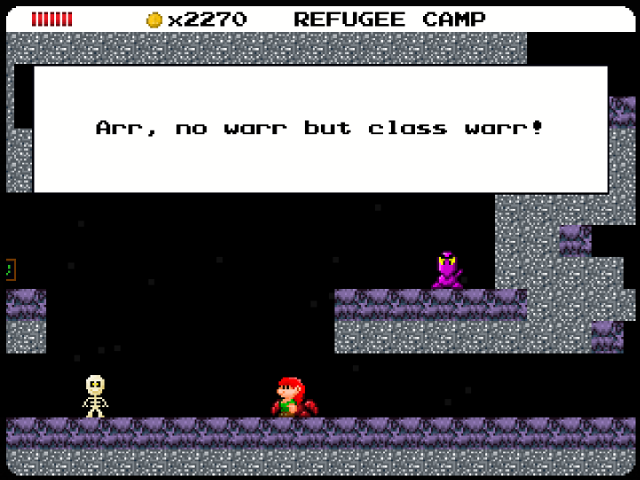 And then there’s all the communism, as I mentioned earlier.

And confused, in equal measure. 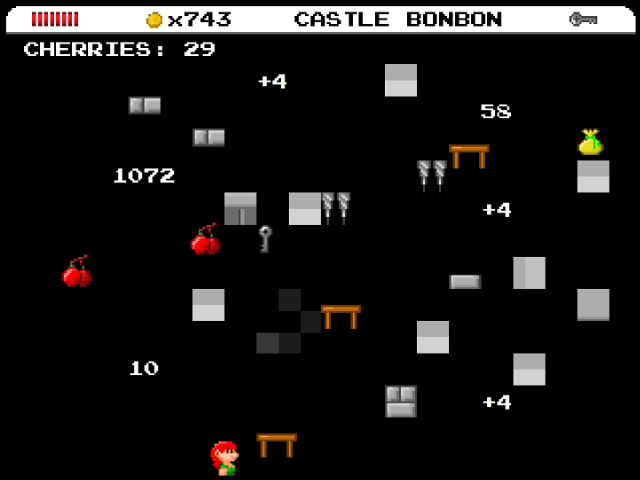 This game isn’t afraid to be strange. I can respect that.

Omegaland is… I don’t want to blanket-call it a good game. The opening is cutesy fun, but slow and dragging. The twist is cool, but the initial levels right after are very hard, to the point of almost driving me off a few times. It’s after the game finds its second footing that it’s at its best. And even that doesn’t last very long, but all the same, it probably shouldn’t. It doesn’t outstay its welcome for too long, and when it ends, the ending is both cathartic and unexpected. Like it’s something I could have expected, might have predicted as a joke, but then it actually happens and you’re the one who has to make it happen? I’m not spoiling this part, but let’s just say it’s very 2017. 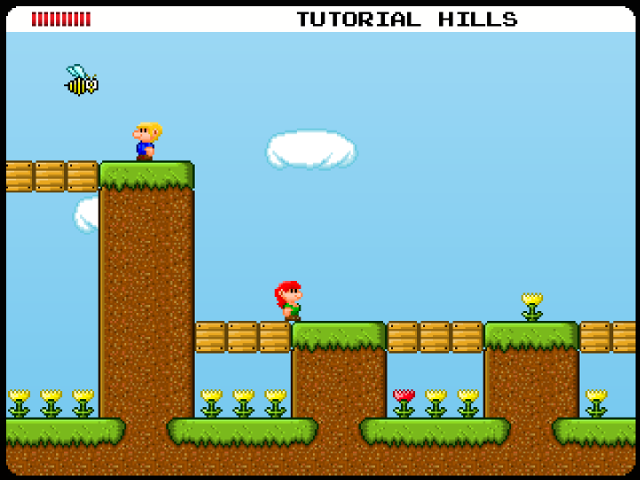 Afterwards, you can revisit all the old levels, which are all reconstructed into danger-free fun zones.

Should you buy Omegaland? Here we hit the Paradox of In-Depth Review: If you’ve read this far, you already pretty much know what the deal is, meaning the game’s twist and change hold less of a punch. All the same, Omegaland runs only three Steam euros. For a game with this much love and care, as well as obvious attention to mechanical detail, that’s an investment that teeters on the corner of ‘fair’ and ‘probably too low, honestly’. If you’ve got a few hours to burn, you like platformers, and you don’t mind getting angry at unfair levels of challenge, consider giving it a try.

Who knows. There might be a whole extra hidden layer to this — who’s to say the ‘end’ I found is the actual end? Only one way to find out, am I right?

Jarenth got every Omegaland achievement, so he’s pretty certain he actually reached the end. >/i>Pretty certain. To celebrate, follow him on Twitter or hang out with him on Steam. And if you dig Indie Wonderland and Ninja Blues in general, why not consider supporting our Patreon campaign?