Sometimes you have to take a chance on a game you know nothing about. Or so I tell myself; the drive to only ever play the RPG adventures and metroidvanias and interesting experimental games (and visual novels) that I know I’ll enjoy (or loathe deeply) is ever-present. But without boundary pushing, how could I expect any sort of critical growth? Stagnation is death when it comes to writing.

Anyway, this unexpectedly wordy paragraph only serves to explain why I picked up Jonas Kyratzes‘s Omegaland. It looks for all the world like baby’s first platforming game, which isn’t generally a genre I’m wild about. But I know looks can be deceiving in projects like this; I have played Frog Fractions. So maybe there’s more to this game than meets the eye? The Steam page‘s “be prepared for few surprises along the way” (sic) does suggest that…

Then again, it might not be. Should I be judging this book by its cover? Only one way to find out.

So far, so ‘pretty much what I expect’. The colours are bright, the music is fairytale-esque, and there are no options to speak of. The background is one colour, the ground layer is repeating in chunks about ten pixels wide, there are four keys that only serve a single function, and while I’m eternally optimistic, I also wouldn’t be surprised if the four background elements on the ground will eventually serve as the majority of the game’s visual filler. 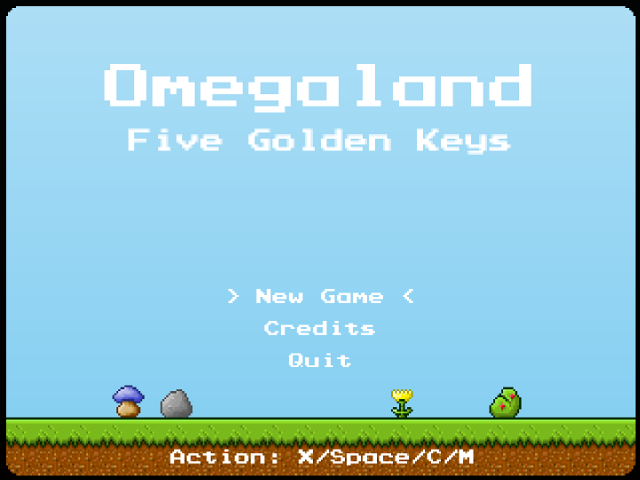 In short, I love it. This is not an irony joke, I’m genuinely on board now.

I am now entirely ready to get into Omegaland, or Omegaland: Five Golden Keys, as it’s secretly rebranded itself as. It could also consider going for Omegaland: Luck Of The Irish, if the follow-up character select screen is something to go on. 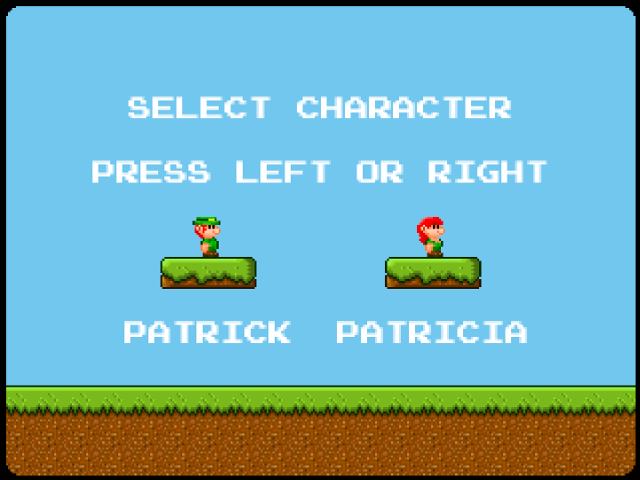 This is, er. Definitely a look you could have used.

I then sit through Omegaland‘s majestic backstory, which goes like this: Princess Omega lost the five golden keys to her castle! Can I go find all of them? 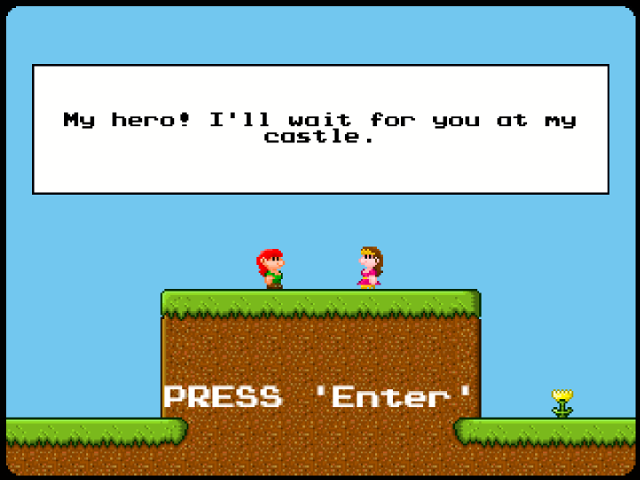 I do not, of course, get a chance to say ‘no’. But then that’s probably accurate.

What can I say, it’s short, sweet, and to the point. And with that quest firmly established, I enter… 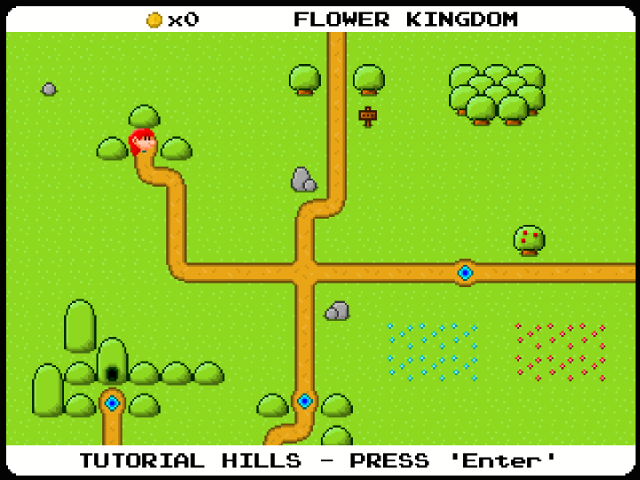 Possibly adjacent to that other flora kingdom of note. Though that one should probably be a little darker.

So, what to do? How does one go about collecting five golden keys? I have no idea, but then luckily I am standing on scenic Tutorial Hills. ‘PRESS ‘Enter”, Omegaland instructs, so I do, and now I’m platforming again. 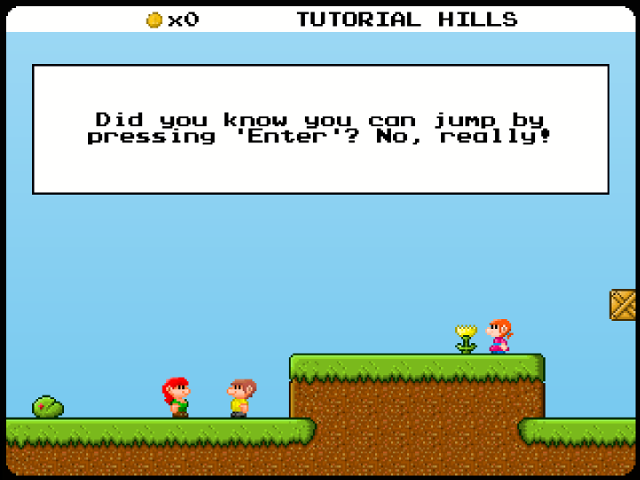 Whoa, buddy, slow your roll. I just flew in!

I am quickly enrolled into Platforming 101, including such classics as: I can jump by pressing the Enter button. Except that’s a terrible button, so Space, X, and C all also work. I can smash into blocks from below to break them, revealing coins and invincibility stars. There are bounce pads, that I can jump on for extra height. There are monsters, which I can knock out by jumping on their heads. There are spikes, which I can’t knock out by jumping on. 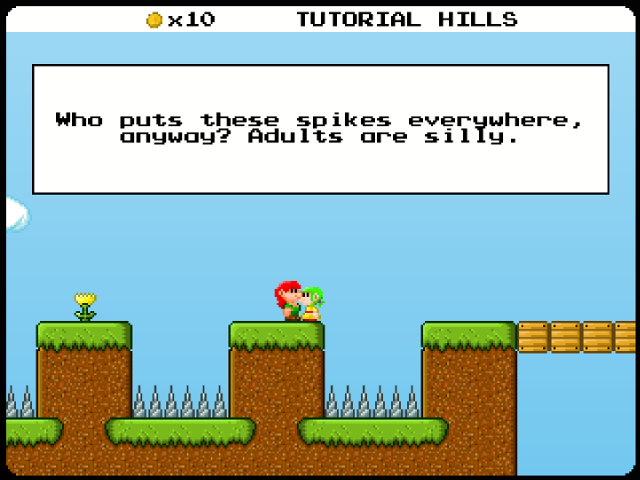 You said it, kid.

I can even buy a magical heart for only 30 of the free-floating coins I’ve been picking up. 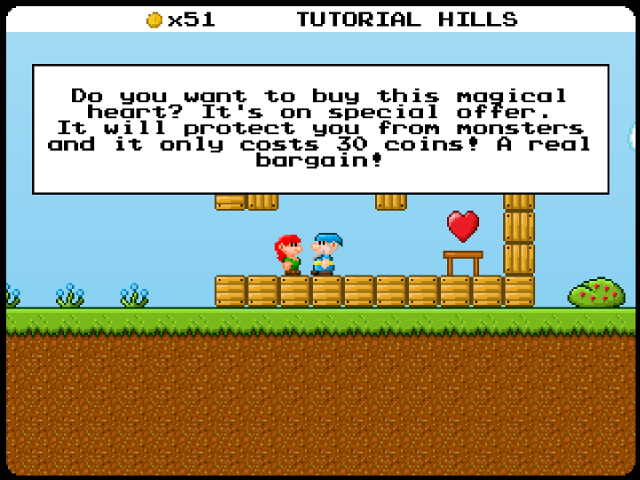 Don’t ask where it came from.

Y’see, without the heart, I touch a monster in any way that’s not jumping on its head, and I fall of the stage, ready to start again from the beginning. With the heart, I only lose one heart. From the heart meter that just now was added to my UI. You know how this goes. I wonder if there will be more wizards later, to buy more hearts from with more coins? This seems like a distinct possibility.

Finally, there are tiny free-floating keys. These unlock grate-style doors, like the one blocking the exit to the current level. 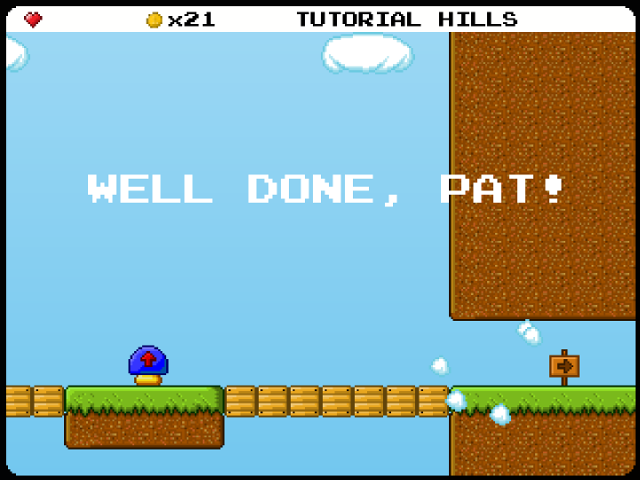 Of course, this ingenious puzzle cannot stop me for long.

And that’s it! Level complete.

Back on the world map, I learn that I can now move around with the same arrow-or-WASD keys as in-level. Except I’m confined to the beaten paths. The glowing blue and green circles are levels: Green levels are completed, and I can pass through them, but blue levels are not, and I cannot. Pass through them without defeating them, you get where I’m going with this. There are three paths branching off from scenic Tutorial Hills; which one do I pick? I opt to move south, which brings me through Happy Hill Homes and — hopefully — will curve back up to that mysterious cave in the lower left. 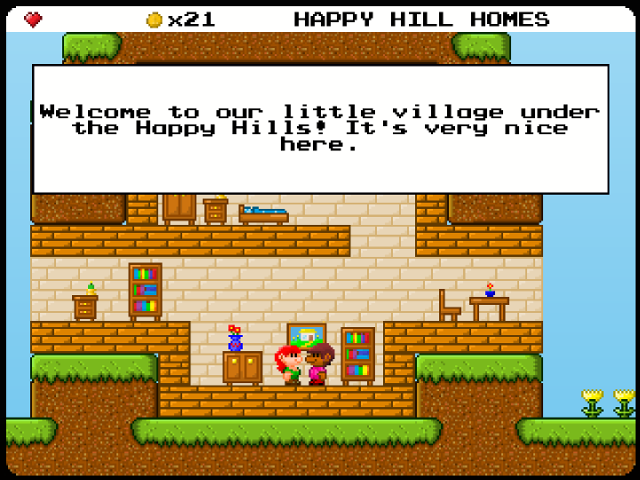 I don’t know what I was expecting from ‘Happy Hill Homes’, but this was pretty much it.

And, er… That’s pretty much it.

I mean, obviously there is more to Omegaland. Environments aren’t just happy green fields, but range from caves to desert walks to snowy mountains, each with their own colour and background theming and musical accompaniment. I meet not only several different colours of Imp Or Something, but also floating heads, snakes, falling stalactites, and angry angry bees. There are invisible blocks, and timed blocks, and secret passageways, and layered doors requiring several keys at once — which the UI doesn’t very clearly register. I can buy not just extra hearts, up to five, but also a neat double-jump ability. There are treasure chests, laden with coins, which help pay for the exorbitant heart upgrades. 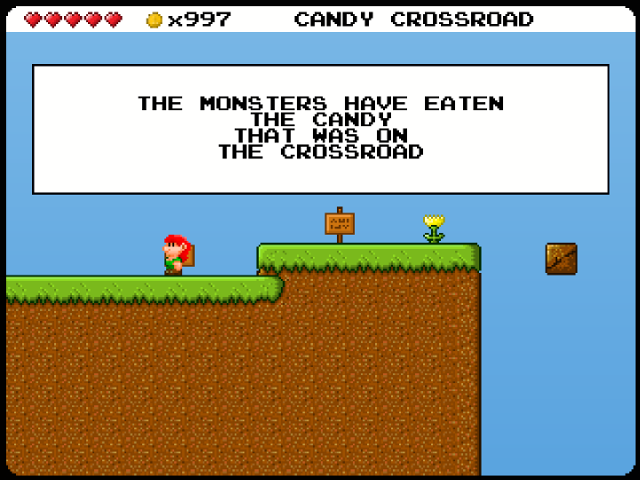 Perhaps most interesting is a hidden series of fetch quests: In almost every level, I find I can grab some sort of food item, like the ‘Hyperborean Herring’ or the ‘Limoncello of Ludology’. These don’t seem to do anything, but I do get an achievement every time I pick one up. Maybe it’s just that? Or maybe…

Well, whatever the case. My point is that gameplay-wise, Omegaland doesn’t really seem to change. I started off grabbing coins and jumping on monster heads, and I’m pretty sure I’m near the end already, grabbing coins and jumping on monster heads. I figured out where the five golden keys are, and unless I’m mistaken I’m pretty on-track for getting the fourth one, right after I finish this sentence. 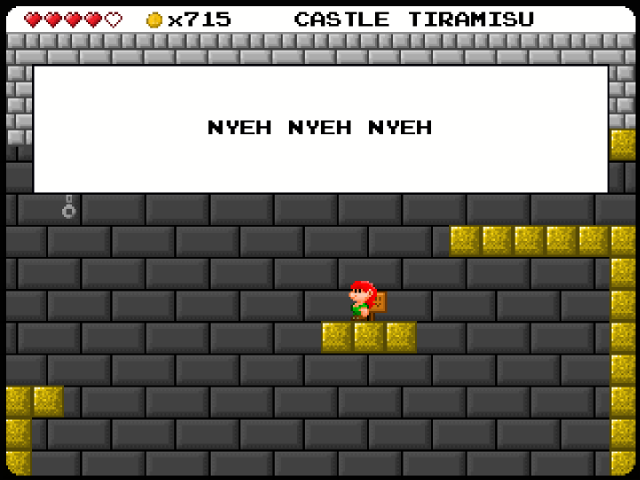 Huh, I guess you sometimes can judge a book by its cover, huh? I’m gonna get that final golden key, and then I’m gonna give ’em all to Princess Omega, and then that’s going to be the end of that. I guess that means this review’s gonna be a little shorter than usual, for which I’m sorry, but what can you do? We play the die as it falls. So here’s my final verdict: Omegaland, it’s exactly what it says on the tin and absolutely nothing else. End of review, thank you for reading.

I technically need to have a second-page link here, because that’s part of my format. But there’s really no need to click this. There’s not gonna be anything interesting on the second page, probably. Just ignore this. >>