I first heard of Wizard Fu Games‘s Songbringer in that most me way of hearing about new games: An online acquaintance hyped it on Twitter. I otherwise have very little idea what to expect from Songbringer. It bills itself as a ‘procedural action RPG’, which, what exactly does that mean? What do those words in that order tell us about what this game is? Nothing, that’s what. Which means there’s only one way I’m going to find out…

‘Wizard-Fu Presents’… Dubby electronic music and colourful pixel-faded nebulae herald the opening of Songbringer. I’m pretty down with the immediate audiovisual aesthetic of this opening. Then I try to screenshot it, and the whole thing immediately disappears, and I learn later my screenshot shows nothing but a black rectangle. 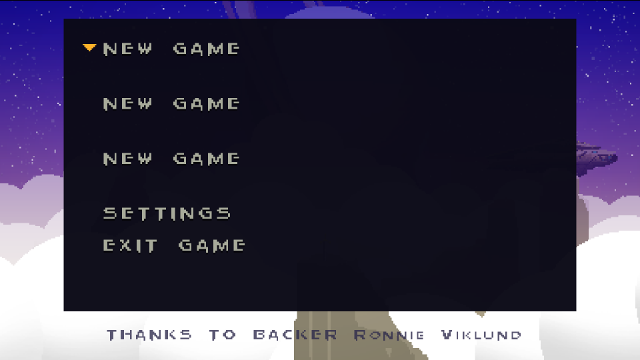 Options-wise there’s not a whole lot here, but then I’ve come to expect that from this pixel-type art style. There’s not a lot of room to work with: What would anti-aliasing even do to a game with visible pixel edges? So we get our resolutions, we get our VSync, and then there’s the all-purpose ‘quality’ setting, currently set to < AWESOME >. Two audio percentages, input options for players 1 and 2, suggesting this game might have a local coop I probably won’t get to in this review. All in all, it’s a perfectly cromulent menu. The main purpose it seems to serve is as thin justification for a continually-running ticker of thanks for all people who make this game possible. 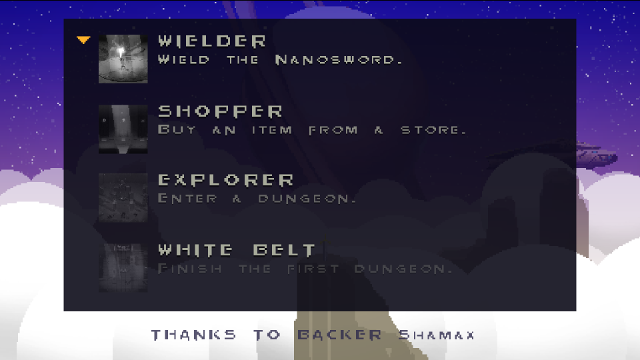 When I start a new game — Normal, not Permadeath, thank you very much — Songbringer asks me for text input. Not for any sort of character name, but for the ‘world seed’. Which… Huh, I didn’t quite get this at first, but breaking the temporal illusion of this review being written in medias res for a bit, I guess this game is billed as being procedurally generated. Neat that it lets you seed this on your own terms. This also explains why, looking at leaderboards earlier, every player had both a Steam name and a smaller nonsense-seeming word in their rankings, like ‘wizard’ or ‘london’ or ‘sarpnn’ or ‘fanny’. 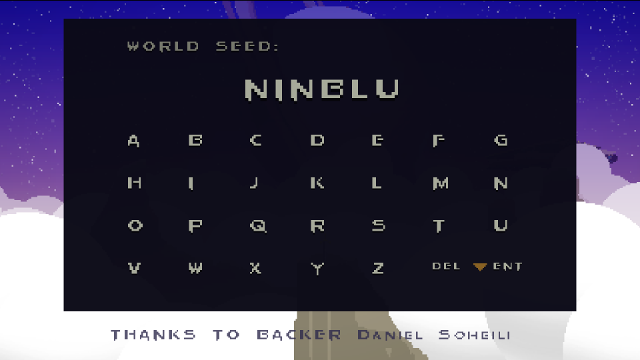 At any rate, I obviously have to go with this world. I wouldn’t name the world after *myself*, because I’m not a megalomaniac, but the site at large? Fair game.

Then… I guess the actual seeding process is visualized. Weirdly so, by way of colour-shifting squares. It’s… interesting to look at, in an early-Windows-screensaver sort of way. 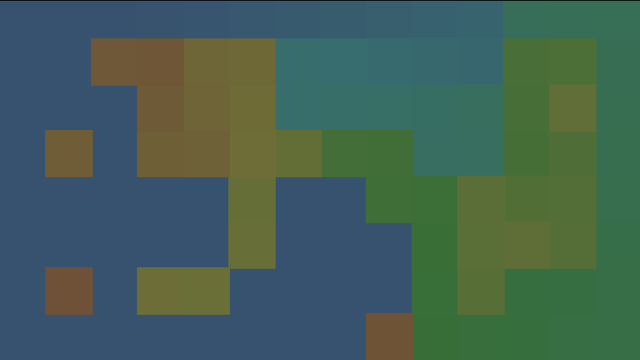 This is what results, I suppose. Welcome to NINBLU! 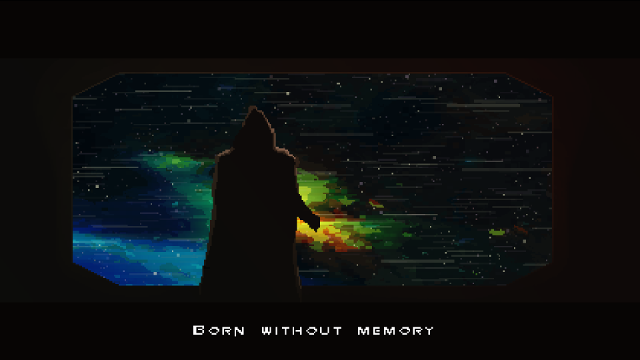 I’ll spare you the long, confusing doozy. It comes down to this: There’s a circus ship called Songbringer, near a star called Bellatrix, stopping over on an abandoned planet called Ekzera for ‘medicine’ and party times. But while flying down on some sort of space hoverbike, a bolt of lightning from a tall tower hits the outline of a man, the bike, and what appears to be some sort of speared apple. They plummet to the ground. 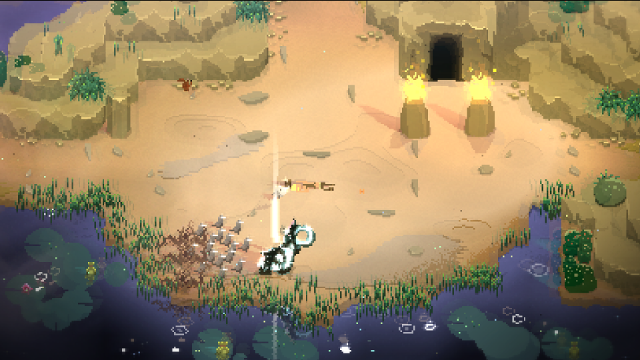 And that is where we open.

Our hero, Shirtless Man With Yellow Hair, textbox-groans in pain. “I smell plasma”, says he. Next to him, a small white orb of some indistinct feature and function uprights itself, them floats in the air and starts talking. So it’s a robot, then. The text quickly establishes that the man is called ‘Roq’, the robot is called ‘Jib’, and that Roq doesn’t seem to be remembering much of what just happened. 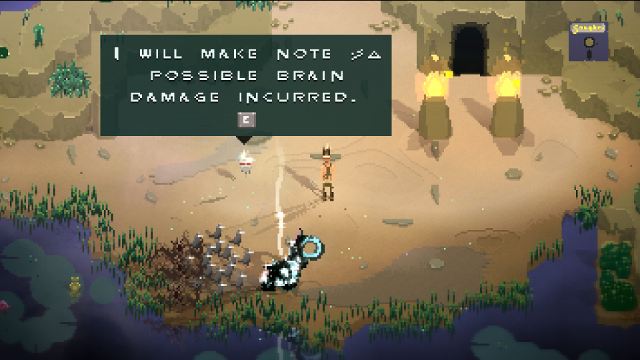 It’s too early in the game to call if this is played for comedic purposes or straight.

The dialogue ends on that cheerful note. I wait for a few more moments for any sort of… explanation, or guidance, or semblance of direction for what I should be doing. None is forthcoming. 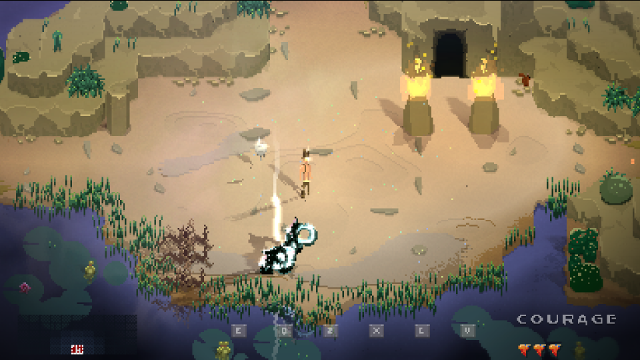 Anything? Not even a controls suggestion?

Ah, but okay. I’m an experienced game player, I can figure these things out. I nudge the analog sticks on my nearby controller, and sure enough, that gets Roq moving. And who needs direction, anyway? Look, there’s totally a cave nearby. If The Legend Of Zelda taught me anything, it’s that caves near starting locations always hold cryptic old men willing to dispense rad magical swords.

I enter the cave. Inside is a statue of a cryptic old man, and what appears to be a rad magical sword. 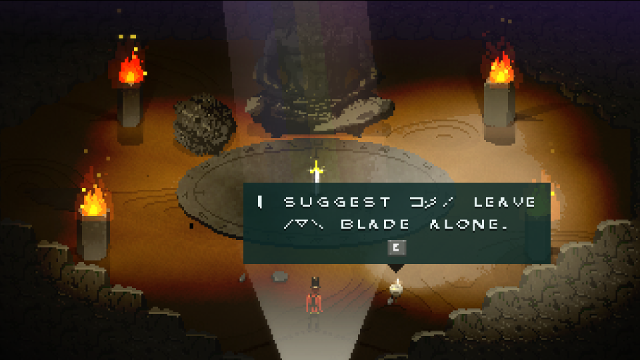 Jib gets an early start on ‘worst suggestion any character in the game is ever going to give’, I see.

Oh, okay. This is how we’re going to play things, huh.

I grab the sword. A cool cutscene plays, complete with lens flares and a heroic pose, demonstrating that this action was Definitely Smart And Good. And then I own the Nanosword! It… hums.

Then a nearby rock paints me with a targeting laser. Or scans me, either/or. Whatever the case, a floating black monster blob enters the room. 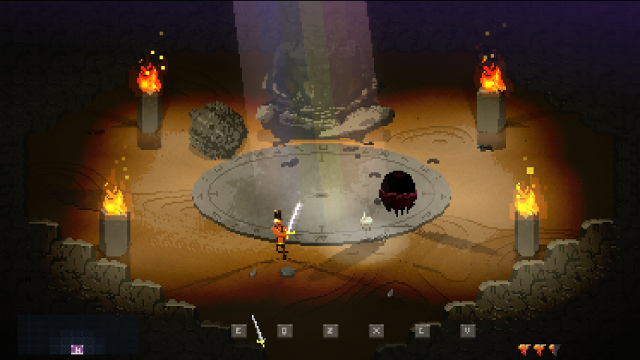 AAAH THIS DOES NOT CONFORM TO STANDARD HEROIC FANTASY EXPECTATIONS

Time for an impromptu combat tutorial! Which is to say, there’s no tutorial, but I can see button prompts at the bottom of the screen. By pressing certain buttons — controller-A, or keyboard-E — I can swing the Nanosword sort of vaguely in the direction Roq is pointing. It works the way you’d expect, but only if the way you’d expect involved either soap shoes or ice skating.

I wail on the blob. The blob runs into me, depleting my supply of courageous monster teeth. Eventually, with half a tooth left, I land the final hit, and the blob explodes into light, black particles, more monster teeth, and diamonds. 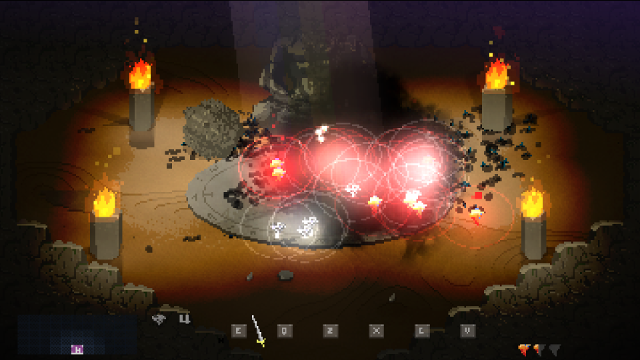 This has definitely been an eventful eight minutes. 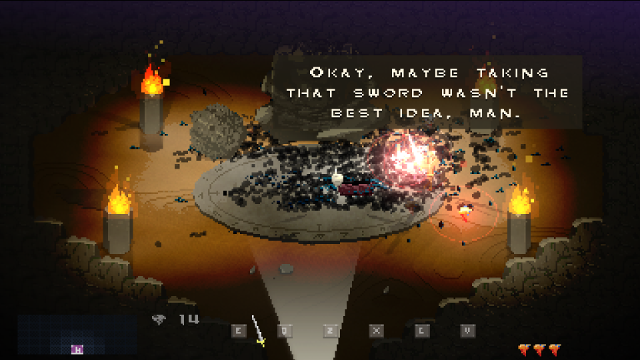 So this is how it’s going to be. 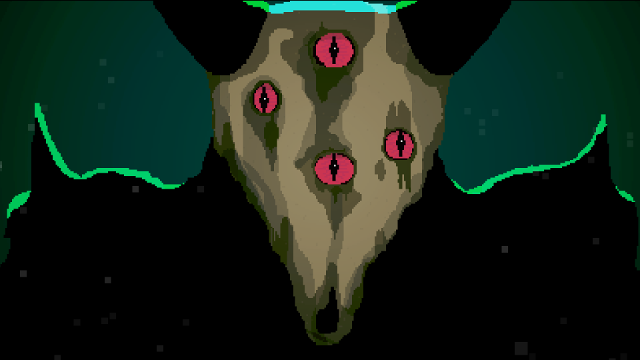 As if to reinforce the lesson, the scene very quickly cuts away to this lovingly detailed horrible four-eyed goat monster, waking up in a test tube somewhere.

Anyway. Outside of the cave… I’m still no closer to having any idea of what I’m supposed to be doing. But at least the sword allows me to cut down some path-blocking thorny plants! They grow back in seconds, but still.

I decide to walk off-screen. To… the left. There are statues here, and more thorn thickets, blocking the path further left. I could go back right, or up… but then I do have this sword. Further left still are shrubs, and ponds, and more of the large body of water I’ve been flanking. Further left still is a herd of what look like adorable tiny mammoths. They advance on me in a completely non-threatening manner, so I take the only action video games have taught me to take in these situations: I relentlessly attack them until the very last one explodes into black bits and vapor. For doing so, I find a Quarter Demon’s Tooth, which promises to eventually make me more powerful. 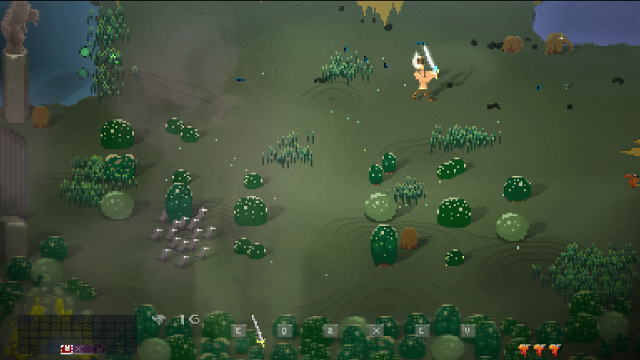 Face of a hero, folks.

Further left still is a cave, with inside an automated store. Had I more of the diamonds that litter this planet, I could have bought a ‘Matter Bomb Container’, or a ‘Bio Detector’, or ‘Magnetic Top Hat Drones’. But alas. Instead I go outside, hack around the grass in anger, and find a Bio Detector just sitting there, apparently. 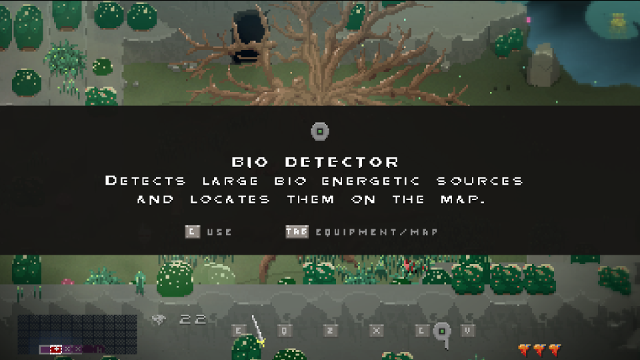 Nobody tell the shopkeeper.

Using the inventory menu, I assign the Bio Detector to one of my six action buttons: A, B, X, Y, Lb, and Rb. Then I press the button, and watch as a few green dots circle outward. And then… nothing, immediately. It takes me a few seconds to spot that one of the squares on the map, in the lower-left corner, is now blinking green. I guess… I guess this is where I’m going to go?

One square before reaching my destination, I find the aforementioned four-eyed goat monster. 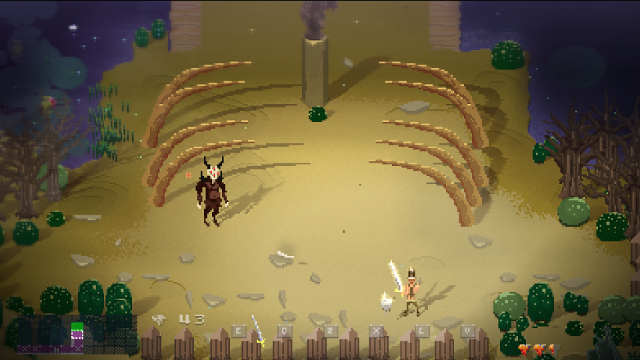 The area is immediately walled off, as if to reinforce the lesson ‘best put that sword to use, space-man’.

Anyway. I murder the goat monster, because of course I do, and for my efforts I receive a top hat drone that I can throw like a boomerang. I test it out as the goat monster corpse dissolves into black worms behind me, and while Jib idly comments that ‘it is getting late’, I wonder for perhaps the first time how much of this game is real and how much I’m hallucinating. 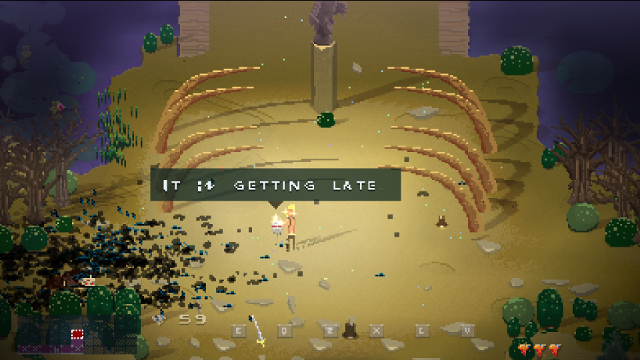 It’s certainly had all the rhyme, reason, and internal logic of a bad daydream, so far.

On the square marked on my map, I find old stone ruins with in the center an apparently functional hover elevator. I step on, and it brings me down into a flashback, 6 years ago, when first met Roq and Jib. For some reason. Then I’m back in the present again, where the area I entered is a dungeon. With monsters, and keycards, and doors, and items. 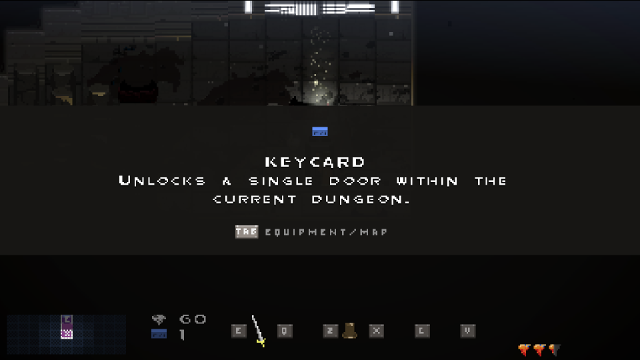 Sure, this probably makes sense. 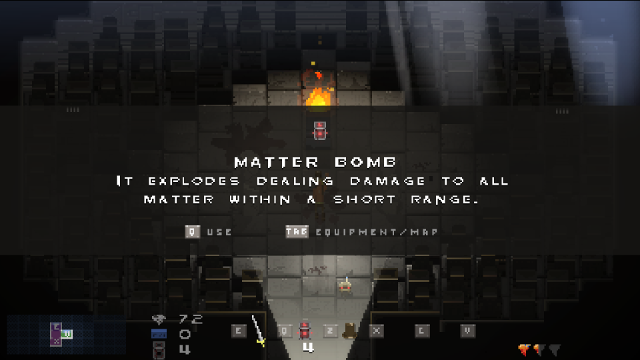 And of course I’d find futuristic bombs in the cellar of a stone dungeon, hidden behind spiderwebs. How else was I going to blow up those cracked pillars? 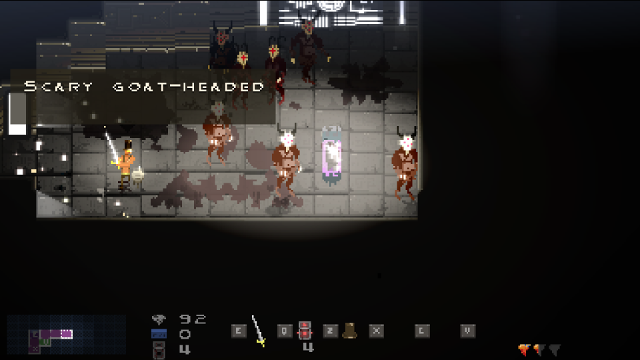 Multiple variations of horrible goat monster, which I have to fight in a much larger group than I’m accustomed to? Yeah, no, that seems on the level. 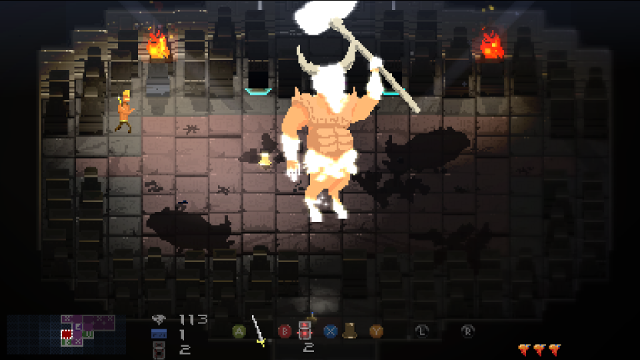 Of course one of them is a giant boss monster. I mean otherwise why even build a dungeon to begin with? 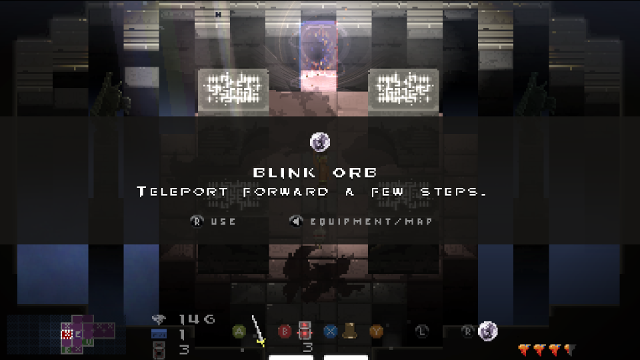 And when I kill the boss monster, what do I find? That’s right: An orb of teleportation, to go with my new Demon’s Tooth of Courage.

I step outside into the rain and darkness, and blink my eyes in spite of that. How long has it been? Can’t have been more than fifteen minutes, start to finish.

What did I just do? Entered a dungeon, killed everything inside, found some cool bombs and a teleportation orb, and upgraded my max health.

And what purposes did that serve? Why did I go into that dungeon, or fight those monsters, or use that Bio Detector, or grab that sword? Why has anything that has happened so far, happened, and how is it informing the things I’m going to be doing next?…

I’ll have to get back to you on that.