Sharp-eyed inspectors of my Twitter timeline the last two weeks may have guessed the review that would show up this week. Like many of my friends, peers, and distant relations, I fell hard for Opus Magnum, Zachtronics‘ latest… opus, I guess, in their preferred systems optimization genre. It took an international board games convention and a glut of incredible game releases to knock me out of an Opus Magnum fugue, and even now, I’m thinking about going back. I didn’t even get that far into the story. And I could probably optimize that one puzzle a little better. Maybe by…

So it might surprise you that, as the headline suggests, this is going to be a relatively short review. Turns out I just don’t have that much to say about Opus Magnum! In fact, I could do the whole review in two lines: “If you liked the other Zachtronics games, get this one too. And if you’ve never played any, but you were thinking about checking the genre out, start with this one.”

Alright, let’s call this my time-optimized review. Check that off the list. For my next solution attempt, I’ll try to write one that actually hits all the relevant content marks…

(Spoiler levels: Narrative, none. Mechanical, some degree, but nothing serious.)

Opus Magnum is probably the single best Zachtronics game to date. It might even be the ultimate one, that would fit the title, though I do have dreams for where this franchise could grow. But in its own hyper-genre, it is unquestionably a masterpiece.

I can’t help it if Zachtronics has a theme. Not wishing to discredit their pioneering work on Infiniminer, the game that mined a thousand crafts, when I think of Zachtronics, I think of Spacechem. I think of Infinifactory, TIS-1000, and Shenzhen I/O, which I reviewed earlier. I pointedly do not think about Ironclad Tactics, because I’ve never been exposed to it and I keep forgetting that it’s theirs and what it is, but I’m given to understand even that game fits the genre to some degree. Consider this my perfunctory mention. Sorry, mechs. 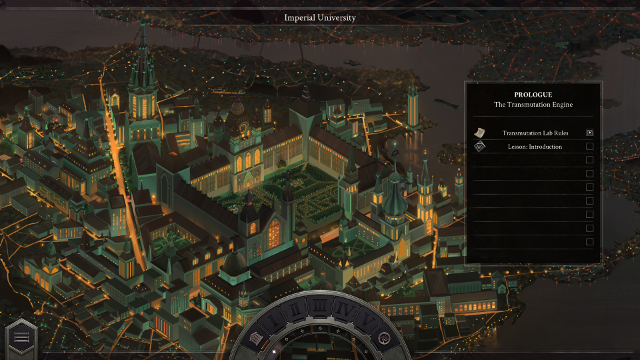 If it makes you feel any better, I don’t miss you.

It’s a remarkable series to study for its evolution, the parts that stuck and the parts that went. Spacechem gave us the idea that sticking atoms on a circuit board and simulating chemical engineering might be fun. It brought in much of what stuck around in later entries, like the focus on community metrics (that you compare your own results to), optimization along different, often mutually exclusive tracks, and a style of story writing that I remember as ‘baffling, but in a good way’. But it was also highly ambitious: How many of you remember Spacechem‘s factory-building levels, where you connected multiple reactors together to create giant supply chains, or its actual boss fights like shooting a floating pyramid monster with chemical lasers? Infinifactory took the idea of spatial building 3D, no doubt influenced maybe just a little by Infiniminer‘s legacy. TIS-100 brought basically-real assembly programming into the series, and Shenzhen I/O took this one step farther, combining real programming skills with real circuit board design skills in a game that should honestly be a case study for serious games design. And Opus Magnum, well…

(I realize on re-reading that I haven’t actually talked about what Opus Magnum is. So: Opus Magnum is a game in which you build machines to create alchemical compounds. It’s a puzzle game, which each puzzle containing one or more inputs, which spawn certain alchemical atoms, and one or more outputs, which dictate what type and shape of alchemical atoms you must create. You build arms to grab, move, and release atoms, bond stations to bind atoms together, tracks to move arms laterally, and special alchemical equipment like calcifiers and transmuters. You then code actions for each arm by moving icons corresponding to a small set of actions in a track at the bottom of the screen: Turn left/right, grab, release, rotate, that sort of thing. Each puzzle requires you to deliver six of each product, and each solution is rated on the number of action cycles you used, the number of hexes your machine occupies, and the cost of all your components.) 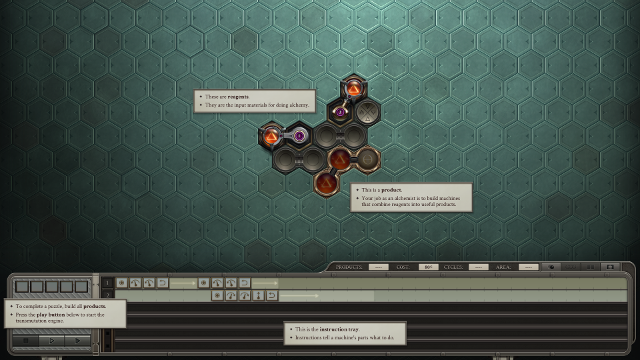 “This is exactly what it is, but what is it.”

It feels like Opus Magnum has tried to bring together most everything good from the other games. From Spacechem it takes the visual approach of placing marbles and machinery on a field, with puzzles that focus on the spatial manipulation and interplay of those elements. It’s one of the things I loved most about Spacechem; I always felt that the assembly programming of TIS-100 and Shenzhen I/O was really cool, but also off-putting, in a way. Programming is scary! I know this series’ target audience has always been super nerds, but there’s no denying that to many, ‘programming’ has an air equal parts ‘the worst math assignments from high school’ and ‘dark magic’. But everyone can understand moving different colours of science ball around. 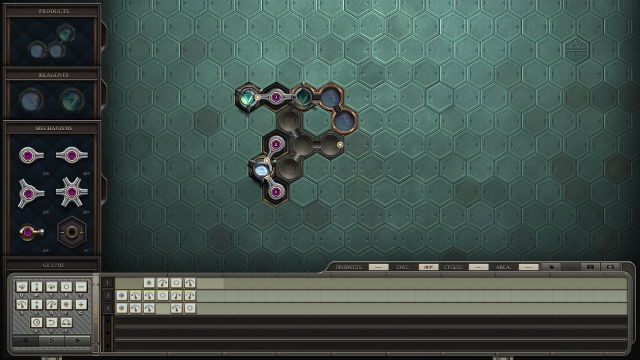 Look at how easy this looks — Everyone can get their head around *this*!

But where Spacechem was all spatial, Opus Magnum also incorporates the coding approach from TIS-100 and 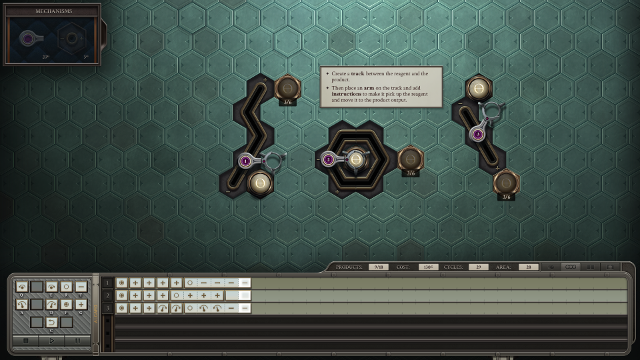 It’s just a bunch of naughts and crosses, how hard can this be?

One of the two things I love most about Opus Magnum is how it brings these elements together in this way, creating a game that feels at once both unique, and uniquely Zachtronic. It hides an ocean of possibility and fiendish complexity behind bright marbles and robot arms and series of pictograms. And with every puzzle having three tracked metrics, it ensures there’s something to strive for for every player. I tend to focus on cycle efficiency myself, since to my mind that feels like the most interesting puzzle to solve. But I equally have friends who build the smallest possible machines, or the cheapest machines, or machines that combine all three as low as they can get. It’s still a game aimed squarely at optimization experts, but there’s enough optimization space to play in for everyone.

The other reason I love Opus Magnum is the GIF maker.

You had to know this was coming.

It cannot be overstated how clever this feature is. It’s so clever, I honestly can no longer remember if it was in previous games or not — Surely it must have been? Making cool solutions and being proud of your weird contraptions has always been part of Zachtronics’ games, and people love comparing and sharing their works. The leaderboards are great to engender competition, but those don’t convey the cool. And static images are nice and all, particularly for games like TIS-100 and Shenzhen I/O… But Opus Magnum is physical, it’s spatial. It’s coding and machine design. If I want to share my solutions with other players, it doesn’t mean I want static screenshots filled with UI and code. I want to show them the motion.

Some of these are genuinely mesmerizing.

To add praise to pleasure, the generated GIFs don’t just show the looping machine, but also the relevant leaderboard stats. It’s at once a way to wow, brag, and share, with the added benefit of somewhat showing what you’ve made but not actually showing the nitty-gritty.

No, but this is actually important. By only showing the motion and the scoring elements, and foregoing the core, Opus Magnum makes its GIFs an integral part of learning from other players. What got me (and many like me) into Opus Magnum wasn’t any targeted advertisement, but people uploading mysterious puzzle GIFs. And once I played, I got great enjoyment out of looking at my friends’ solutions. But I only did this because looking at an Opus Magnum solution GIF isn’t the same as getting the solution. You can see the spatial layout of the components, but not the underlying code, which is at least equally important.

Basically what I’m saying is: You can look at Opus Magnum solution GIFs for puzzles you haven’t played, and not be spoiled. Every puzzle has so many different solutions, and without the code, copying given answers is tedious at best and impossible at worst. Because of this, looking at other players’ GIFs stops being an exercise in spoiler avoidance and starts being a great learning tool — for the mechanical aspect, at least. There are so many tricks, configurations, just ideas I got from other players, stuff I’d never have thought of on my own. And once I started taking those ideas into my own puzzles… Well, let’s say Opus Magnum GIFs are pretty fun to keep around as a log of your personal progress as well.

The net effect of all this, on the type of person who enjoys these kinds of puzzles, is staggeringly addictive. I can’t overstate to what degree this game colonized my conscious thought the first three or four days I played it. I would spell out envisioned solutions to myself on the walk to the grocery store: “Okay, so this one goes grab, move, release, back… and then release, back, grab, move… and then the other two arms can go grab, expand, shift, release, shift… and then this one rotates…”

There are two groups of people in the world: The people that look at that rambling text and then this image and go ‘what the hell is he on about?’, and…

Even now I’m thinking about it, a little. I never got beyond the first set of puzzles, because those are so much fun to optimize. And then my friends kept showing me up… But there are so many more puzzles I could bite into. Maybe I will after I finish this. Or maybe I’ll try upstaging.

You get the idea. Opus Magnum is an incredible example of the system optimization game genre, feeling like the exemplar that all other games have built towards. And, in return, feeling like a staging ground from which other, even greater games could launch off. Imagine an Opus Magnum follow-up that reincorporated Spacechem‘s factory building, syncing multiple puzzle reactors into a coherent whole. Or something like an RTS, where the trade-off between speed, size, and cost has actual long-term gameplay ramifications! The possibilities are staggering. But even in the here and now, Opus Magnum is a great game for its niche audience. Well worth the €20 asking price, and more too; I suspect I’ll be launching and relaunching this game for a long time to come.

Jarenth invites all of you to join his Steam List ‘O Fools and show off your solutions, which are probably better than his. Wait, that’s not what I meant to saw. Follow him on Twitter or hang out with him on Steam for easy mockery. And if you dig Indie Wonderland and Ninja Blues in general, why not consider supporting our Patreon campaign?