Hey readers. November’s fast approaching; Long-time readers will know this as the time I generally indulge in the theme of visual novels and dating sims. However, following reader feedback at the end of the last excursion, I’ve decided to tweak the formula a bit this year. By not indulging in the formula at all. November 2017’s gonna be Just Normal Indie Wonderland Reviews month, or: There Are So Many Good Games I Haven’t Gotten Around To Reviewing Yet, You Guys Have No Idea.

As some contrition to those who like to see me suffer in a serialized manner, I offer this: Earlier this month, I was mailed by a PR representative of Daylight Studios with an unprompted review key for their latest work, Holy Potatoes! What The Hell!?!. Yeah, it’s this series again, of earlier weapon shop and space adventure fame. I was mailed because the studio thought that my earlier experience with pop culture potato games would make this a good fit for my writing; And if you think that dramatic arc sounds similar to the last time they mailed me, that’s because it is.

Still. I’m not one to turn down well-intentioned potato gifts.

Yup, this looks like a Holy Potatoes game alright. 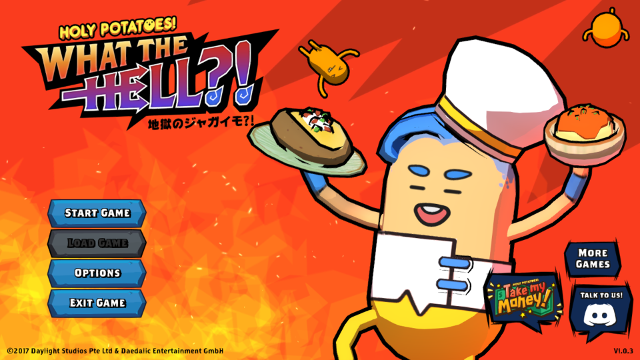 Is that potato holding a baked potato? That seems incorrect.

Definitely has the depth of options and settings I’d expected. 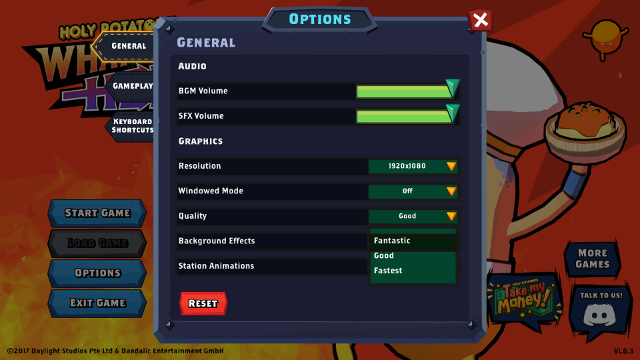 That sounds meaner than intended. These games generally haven’t had a lot of reason to include expansive options palettes, I suppose, so I wouldn’t expect this one to break tradition. 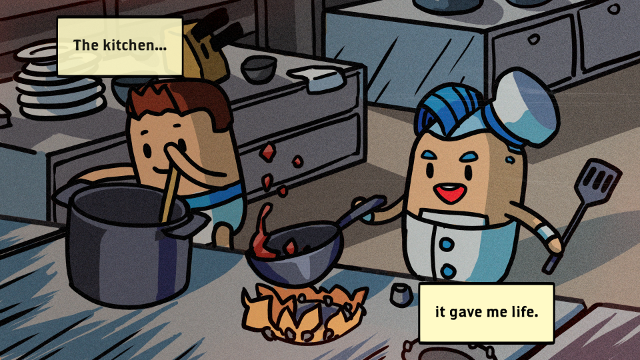 This looks… good? This art style looks good! I can’t wait to find out the whole game is like this.

“The kitchen… It gave me life. But it also took my life. And everything I ever had.” At the conclusion of these menacing text boxes, the camera zooms in on a disconcerted-looking spud, before a hole opens up beneath them and they fall into what looks like hell. Which would have been a bigger twist if I hadn’t seen the game’s title.

The cutscene ends with a hearty THUD (and change), and a shift in style and perspective seems to suggest I’m in the game proper now. 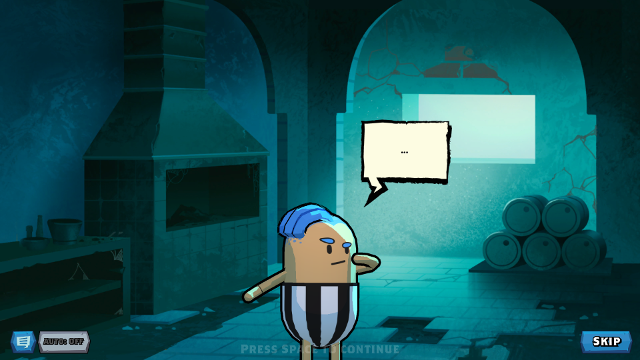 Except I’m not! This is still intro, *baby*, except with text that I have to click to move forward. Odd, it’s almost like a visua…

“Where am I?” reads the blue-haired spud in jail clothes, presumably my stand-in for this event, as they stare around what looks like some sort of dilapidated blue kitchen.

Then, someone else yells at them. 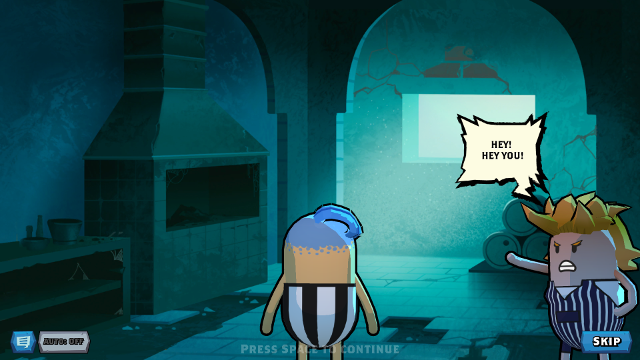 What stands out in contrast with the previous Holy Potatoes games, and it’s probably peak 2017 that this is a sentence I actually get to write, is… I want to say ‘the smoothness of the animation’, but honestly it’s just the fact that there is animation. The on-screen potato people (have you noticed I call them ‘spuds’ without even thinking about it?) walk around, move their arms and legs expressively, use their gaze direction, and actually emote… by changing their entire facial expression in a flash, Lego-head style, but still. Whatever else I end up saying about these games, let it be said they’re willing to evolve visually and technically, at the very least.

As far as the writing goes: This lady spud (see if you can figure out how I can tell this) has just yelled at me for my name, then implied that I have some sort of memory loss. As far as an excuse to have me enter a name, it works, I guess.

What flips the situation into unfamiliar territory is that next to my own name, I’m also asked to name a restaurant? And… design a flag? As in, use an actual in-depth logo editor to pick colours and shapes for my flag, which can be combined in surprisingly permissive ways? 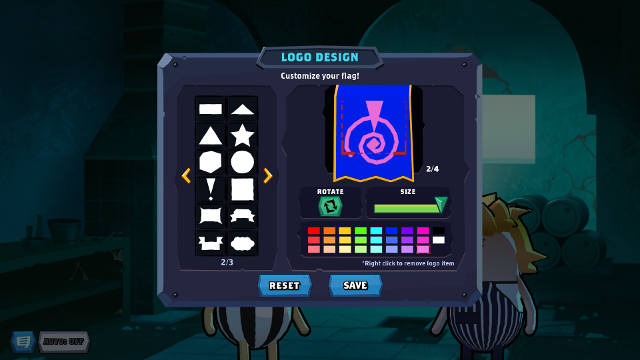 Here, I’ve combined a rotated swirl graphic with a small exclamation point. Since they’re both pink, the shapes blend together, creating… whatever this is.

I have no idea what’s going on. But when has that ever stopped me? 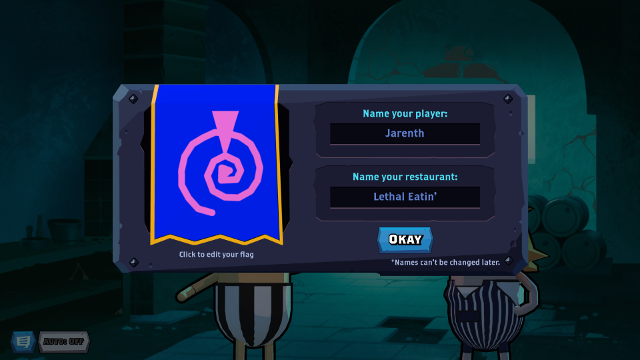 Restaurant named for the fact that I’m very obviously in hell.

No sooner do I choose my name than two other spuds walk onto the stage, seemingly just as confused as me. The rightmost yelling spud introduces herself as ‘Tamie Broccoliver’, which there we go. Time to pop culture reference: Measured in seconds. Anyway, Tamie has an important revelation for us: 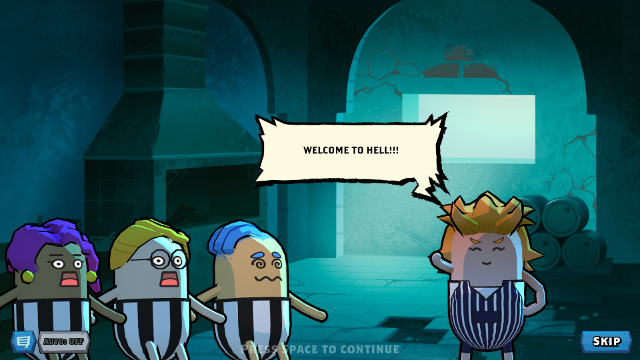 Again, this would have had more punch if it wasn’t so excessively, blatantly obvious. 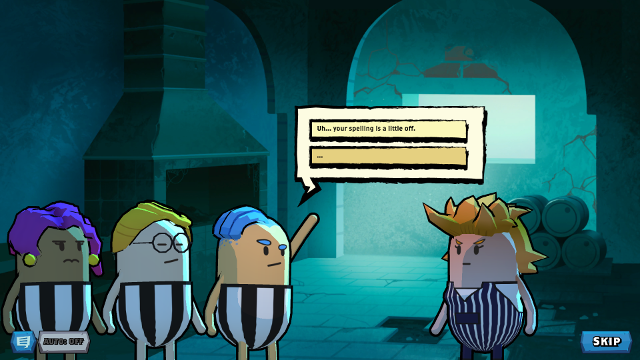 So, the three of us are in hell. Tough break. And we conveniently don’t remember why. But not all is as bad as it seems. We’re not here to be eternally tortured, but to become… chefs? ‘Gate Keeper Chefs, the unholy protectors of Hell’, to be exact. Me, and Dantee, and Veggil, overseeing guess-how-many circles of hell. I guess it’s not even the most absurd videogame adaptation of the Divine Comedy. But where Dante-May-Cry mostly comboed demons to death in search of his topless lady love, our duties in Holy Potatoes! What The Hell!?! consist of… 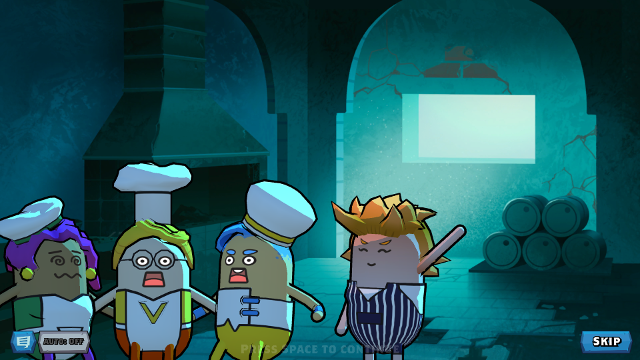 I have to re-read the next section a few times to make sure I get everything right. As gatekeepers of hell, our work consists of ‘processing’ the various sinners that enter hell, sending them to some variant of eternal torture. Tortures include frying, mashing, boiling, baking… Which, you know, I guess that wouldn’t be pleasant for a potato. So far, so (gruesomely) expected. Applicable tortures for each sinner spud are determined by four vices, handily colour-coded for eternal convenience. 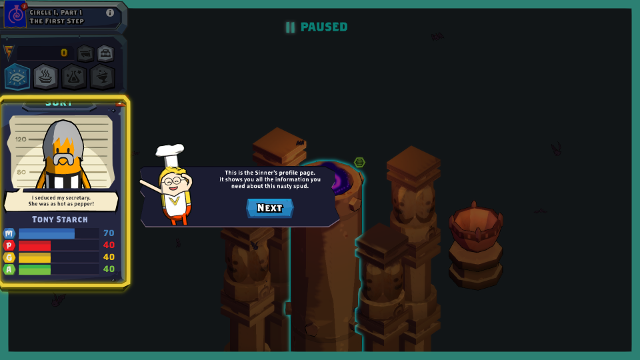 Malice, Pride, Greed, and Apathy. No category for Terrible-Yet-Clever-Puns, sadly.

I assign four sinners to their respective stations, then un-pause the apparently-paused games. The sinners yell as they fly, and then I only hear the content burbling sound of working appliances…

…And then four dings. Because the appliances are done turning these immortal potato souls into cooking ingredients: Fried, boiled, mashed, and baked potatoes. I’m then told to take these ingredients — which, I stress again, are made from the immortal souls of such sinners as the single guy who seduced his secretary — and use these to cook fancy potato dishes, which I then feed to visiting gods. Such as Loki. 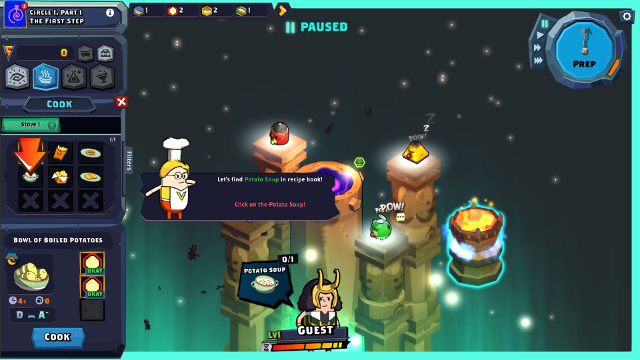 Loki, seen here in their Avengers-inspired getup, desires a soup made from the soul of the spud named after one of their movie nemeses.

If it sounds like I’m being facetious in my presentation here, let me promise you that’s not the case at all. This is genuinely how the introduction went: Here are some sinners. Here are some torture stations. By the way, lunch time is coming up: Better use the converted remains of the immortal dead to feed Loki some potato soup. I blink my eyes once, then twice. Just… what?

So, I do these things. I select the giant infernal oven, and from that, the potato soup that Loki desires. I wait the eight seconds it takes to convert two immortal essences into a godlike bowl of soup, and then present it to them. In return, they — the game informs me this Loki goes by ‘he’ — he visits my kitchen to take selfies and inflict more terrible puns. 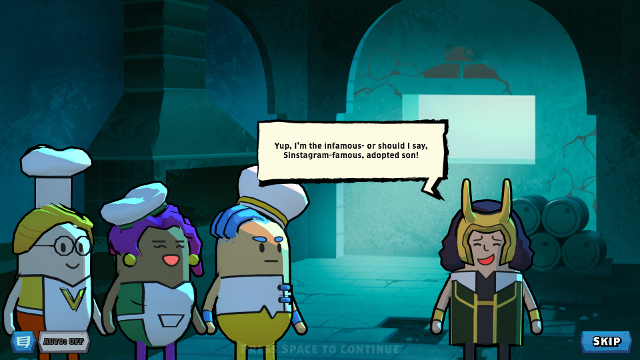 And just like that, we move out of the tutorial and into the game proper, which is really just the same loop writ large. Loki desires food, which means I have to keep processing sinners to stock up Hell’s larder. Each of the machines takes a while to work, and I can only feed certain sinners to certain machines, so there is some weighing involved. But otherwise, since I can pause the game both to assign sinners and to cook and deliver dishes, the whole thing is a fairly relaxed experience. My goal is to ‘earn and keep 50 Favor’; I discover soon enough that Favor is Loki’s reward for feeding him what he wants. One dish, 22 Favor. Another dish, 23 Favor. At the ring of the final bell, I’ve made Loki six dishes (twelve immortal souls in total), earning me almost triple the stated goal. 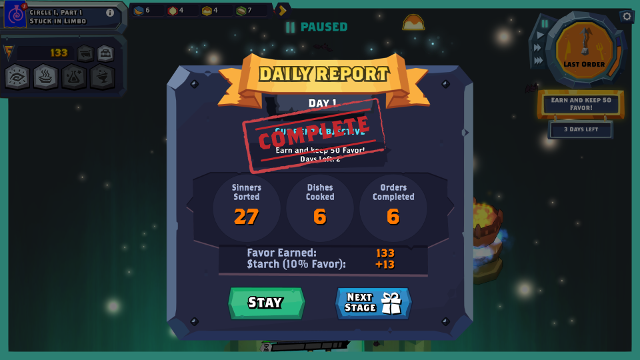 As well as other things.

Then I catch a bat-pig, to keep for a pet. 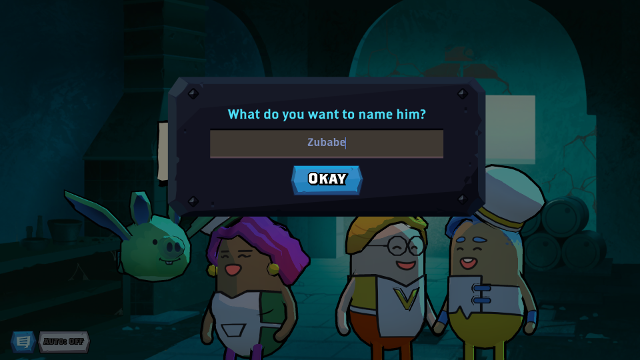 It was either this or Babat.

I… have to give it to Daylight Studios, they definitely know how to swivel. From a game about crafting fantasy weapons, to a game about space exploration and high-tech adventures, to a game about feeding the damned to the divine. If there were prizes for outlandish game concepts… That said, with the benefit of two potato games worth of hindsight, I opt to retain cautious. Both Weapon Shop and We’re In Space had interesting setups, but gameplay designs that fairly quickly devolved into repetition and grind. It’s possible Daylight’s potato-heads took the previous lessons to heart, though; Like I said, they’re nothing if not innovative. Only one way to find out if that’s the case! 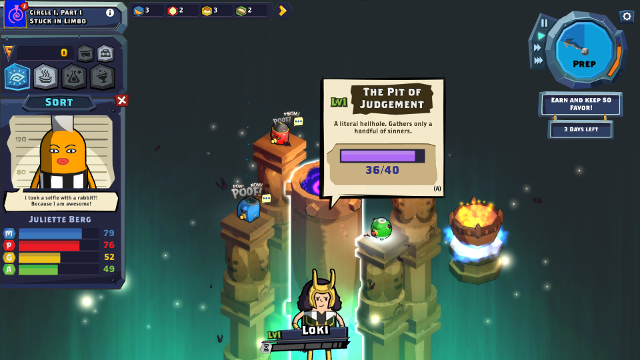 This… does not seem like the kind of sin worthy of being damned to hell for.