Heya readers. Shorter Indie Wonderland this week, for reasons not of poor planning but of content. I was emailed by game designer Robert Wahler, who expressed an interest in seeing me review their latest work, the abstract puzzle game SiNKR. And, you know me, hilariously vulnerable to peer pressure and all that. Plus, SiNKR seemed like it’d appeal to me. I like puzzle games for two reasons: One, I’m good them, which makes me feel clever and competent. Yes, that’s totally a valid reason. And two, puzzle games tend to have a clearly defined end point, making it easy to judge how far off the end I am and how much of the game I’ve seen so far. I wouldn’t recommend that for every game, but as far as planning goes, ‘I can see I have X puzzles left until the end’ is much easier to deal with than ‘I think I might be at the final boss, maybe, unless this is a fake-out ending’.

I beat all of SiNKR‘s (current) 60 puzzles in about an hour and a half. That could either mean it’s too short and easy, which would be bad, or that it’s engaging enough to push through a challenging level of difficulty, which would be good. But which option is the correct one? Well…

SiNKR, Or: Whatever Happened To H00K and LiN? 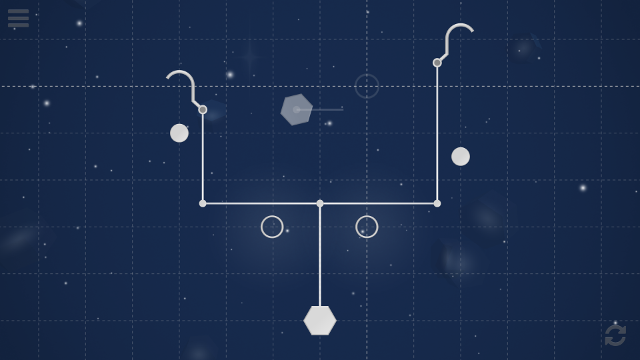 Haha, psych! Turns out hooks and lines were part of SiNKR *all along*.

It turns out that it’s the latter! Mostly. I had a pretty good time with SiNKR‘s simple-but-escalating puzzle mechanics and its abstract audiovisual aesthetic, four-tone visuals and calming piano tones. I felt there was generally a good rising line in the puzzle difficulty, and every set of 6 or so puzzles (let’s call that a ‘level’) tries something new and interesting to keep proceedings fresh. There are some complaints to make with regard to player guidance (more importantly, lack thereof) and affordances for lack of progression, but all in all I had an okay one-point-five hours of reeling in lines and getting round pegs to round holes. And square pegs to square holes. And sometimes round pegs to square holes, because anything goes in search of a solution. 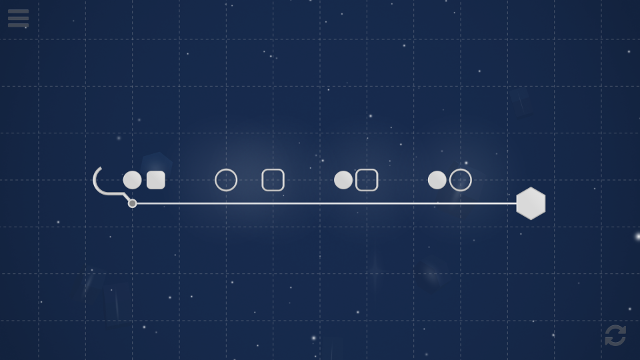 The basic gist of SiNKR is this: Every level has a number of moveable pegs (or orbs, or meeples, or whatever you want to call them) and a number of stationary targets. Pegs and targets cancel each other out, and each level is won if you get all pegs to all targets without having leftovers, and without shooting pegs off the side of the screen. Your primary method of moving pegs around is hooks, attached to lines, attached to reels. Activating a reel (by clicking and holding on it, or by using SiNKR‘s unexpectedly well-developed controller architecture) slowly brings in the line and its attached hook(s), as well as anything caught them. Actions are punctuated by bright piano pings, set to a soothing soundtrack. Clear all the pegs and all the targets, and a happy piano tone sends you off to the next level. Get it wrong to the point of obvious failure, and a somber, disappointed tone bids you try again. 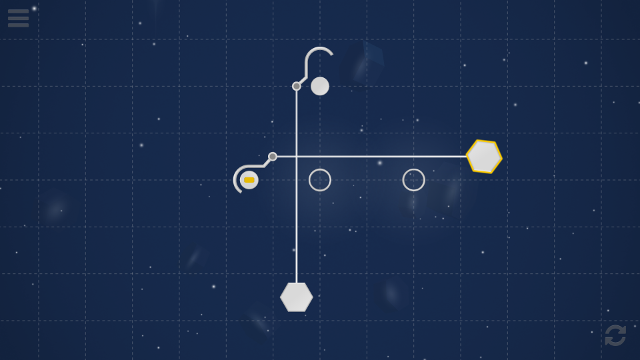 Pictured: A two-reel, two-peg/target puzzle. The peg with the yellow mark has been hooked, the unmarked peg hasn’t yet. Pegs and targets aren’t picky, so I’ll have to drag the top peg over the leftmost target before moving the left peg onto the rightmost one — trying to do things the other way around is impossible.

SiNKR starts off light with this relatively easy base mechanic, and actually gives you some decent time to get used to. But interesting (and complicating) variety is introduced before long, which is to say, from the first level onward and constantly building. The second level introduces the idea of using different hooks in concert, transferring pegs between hooks with tricky positioning. The third level gives you hooks that can be flipped between two positions, introducing the visual notation that ‘items marked in grey are static, items marked in black are dynamic’. Level four introduces the square pegs. Level five introduces grey arrow blocks, which launch your pegs in a static direction, and level six ups the ante with black dynamic arrow boxes. Level seven introduces static teleporters… 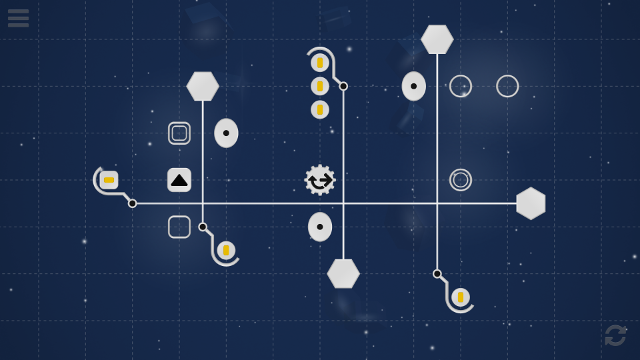 Well, I’m sure you can see where this is going.

I’m pretty happy with the careful on-boarding SiNKR does in each new level. New concepts are carefully introduced in early puzzles, then ‘gradually’ built up in complexity and difficulty. I say ‘gradually’ because unexpected challenge spikes do exist, but in general, later puzzles in a level feel like they build on older puzzles in a logical way. This concludes at the end of each level, with the hardest puzzle for this element in the set: Clear this, and SiNKR is satisfied you understand this particular challenge, and moves on to something else. 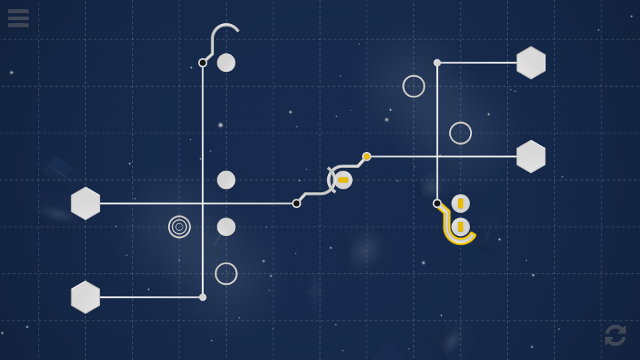 “Alright, you got this crossing hooks things.” — SiNKR.

The difficulty progression isn’t always super direct: The abovementioned hook crossing mechanic, for instance, pretty much disappears after its level is complete. But by and large, SiNKR does a good job of incorporating everything you (should have) learned into raising the difficulty of later levels. The last set in particular was… challenging, sometimes. 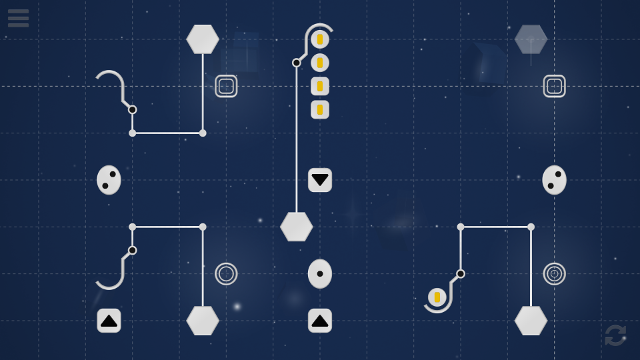 It’s a good sense of progression. If you can keep up with it. If not…

I’m going to say something here that’ll sound like bluster, but since there’s no way to sugarcoat it I might as well: I’m good at puzzle games because I’m intelligent. ‘Intelligent’ in the puzzle-solving and connection-seeking sense: My brain is wired to tackle challenges like these. Accordingly, from my perspective, I saw SiNKR as a series of interesting, escalating, tough-but-ultimately fair puzzles, which I tackled in a few hours to the happiness and improvement of all. I can’t judge if this game is actually difficult or not. Most of the time it didn’t feel particularly hard… though there were a few moments where I found the right answer in some part by just clicking on everything, seeing what works. I think a lot of people could have fun with this game? Particularly if you’re good with visual-spatial thinking, or if you don’t mind working through the options a bunch.

What I can tell you is that if you do get stuck, SiNKR seems to have very little in the way of help. If there is a hint functionality in this game, or some affordance for helping stuck players proceed that isn’t just ‘go look up the answer on YouTube’, I haven’t found it yet. And SiNKR‘s UI is minimalist enough that I’m pretty sure I’ve explored everything. I know how to change the resolution, mute audio and music, and visit the developer’s website, Facebook page, and email. I don’t know what to do if I want a Watsonian answer to ‘what the hell do I do here’.

Similarly, I thought — I thought — that the new mechanics were introduced in simple and clever ways, with puzzles that teach through actions instead of heavy-handed tutorials (this is something Robert Wahler mentioned as trying to avoid in a follow-up email). I liked the subtle colour cues and the shaking of the relevant element, suggesting that hey, something’s going on here, maybe you should click! Honestly, I still think that, and I don’t suspect many people will get stuck on this — as opposed to the later, harder puzzles. No affordance seems to be made for people who do get stuck, though. I’ve left one of these introduction puzzles open for ten minutes now, and all the new element does is shake vigorously. 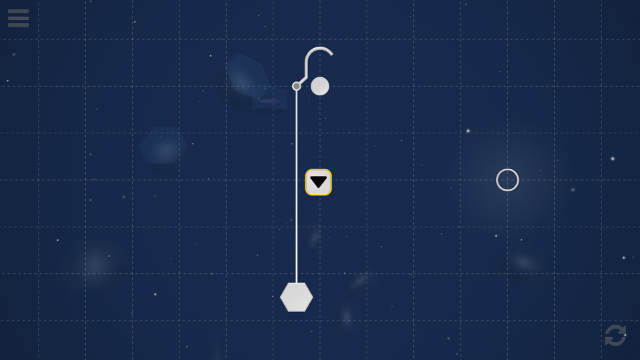 I really hope this comes off the way I intend it, instead of as me going LOOK AT HOW SMART I AM. SiNKR is a neat game, pretty and original and interesting, and the only real mark I would argue against it is that it doesn’t help players that can’t clear it alone. You could counter-argue that learning to manage and apply the mechanics is core part of the challenge in puzzles games, particularly short and abstract puzzle games like these, and I wouldn’t fully disagree. But my counter-counter-argument is that there has to be a difference between challenge and accessibility. A puzzle game that requires me to think for an hour, ponder all options, and finally reach for the hint button to understand the solution is challenging, and it makes me want to get better. A puzzle game that folds its arms over that hint button and denies me progress is inaccessible, and it makes me want to go play something else — either that, or look up the solution online, if I’m trying to get achievements out of spite. But I’m sure a counter-counter-counter-argument exists to this; Ultimately, it might all be a matter of taste.

At any rate, I’ll reaffirm here that I don’t think SiNKR is that kind of game. I definitely had fun with it, and I suspect most puzzle-enjoying players will. And, I mean, it costs a dollar. Less than that if you get it this week. Let’s make that the final line for this SiNKR review: The fun abstract puzzle game about hooks and lines, with great onboarding and audiovisual design and questionable player guidance, that costs you less than a dollar to purchase.

Jarenth didn’t even notice the price until writing the end of this review; Part of the ‘danger’ of receiving review keys, particularly since pricing is an entirely valid aspect of a purchasing decision. Debate the merits of this approach with him on Twitter or hang out with him on Steam. And if you dig Indie Wonderland and Ninja Blues in general, why not consider supporting our Patreon campaign?