Ah! My readers, my children. Come around, come around, it’s been a long time, I know, I know. But as the hour grows late and the fire grows dim, I find I have it in me to tell you on more story. A story about a robot… named fight.

What’s that you say? “Jarenth, ‘A Robot Named Fight is a silly name for a story or a video game, it doesn’t make any sense”? Well, first of all, I can tell nobody ever taught you any manners. It’s terrible rude to interrupt a storyteller, is what it is. Second, you’ll have to take that up with Matt Bitner, from Matt Bitner Games. They named the robot Fight, not I. And third… Did you want to hear my story, or not?

That’s what I thought. Now, where was I? Ah, yes: A Robot Named Fight. I remember it well, readers, children. It’s like I played it only last week…

(Spoiler levels: Narrative, high-ish. Mechanical, medium or high, depending on your reading pattern.)

“Millennia of peace have passed since the mechanical gods ascended, leaving the lower order robots to cultivate the world.” A Robot Named Fight kicks of in medias res, or in medias robots, by setting the scene vis-a-vis robot gods, robot non-gods, and the state of the world. Which is to say, robots rule the world, and all is well.

Or is it? Because something forgotten terrible now stirs amidst the stars… 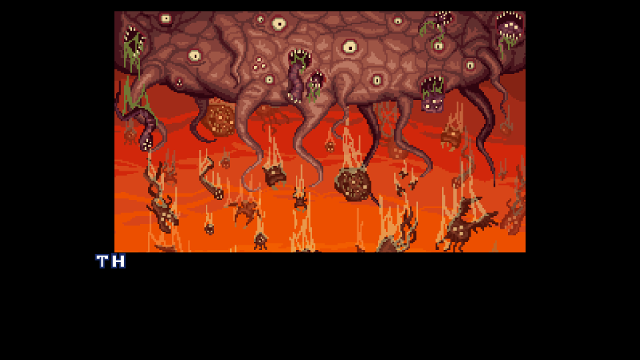 The Megabeast! “A pulsating, moon-sized orb of flesh and countless eyes, mouths, and reproductive organs” — I swear this is actual in-game dialogue, read by a monotone female robot voice — “penetrates the atmosphere and spills its children unto the world.” That’s… I really didn’t need the mental image, nor the visual image that goes along with it. Someone channeled their inner H.R. Giger in this, or maybe Hieronymus Bosch. Whatever the case, there’s a lot of these meat monsters on the world now, and the robots are apparently ill-equipped to deal with the scenario. All but one: A lone robot, who may or may not be named ‘fight’, has to delve deep beneath the earth to uncover the lost war artifacts of the ascended robot gods. In order to fight the Megabeast. 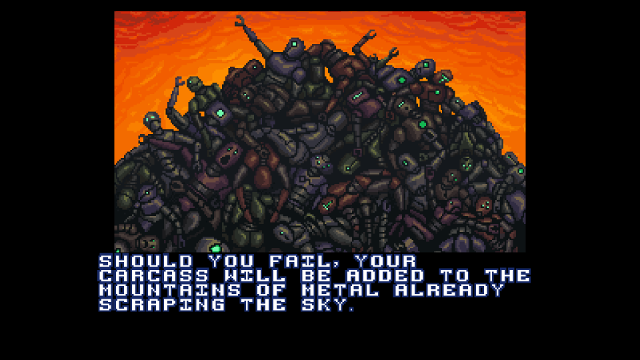 As far as narrative setups go, I’ve seen worse. I’ve not seen many as viscerally disturbing, but that’s a whole other can of monkeys. 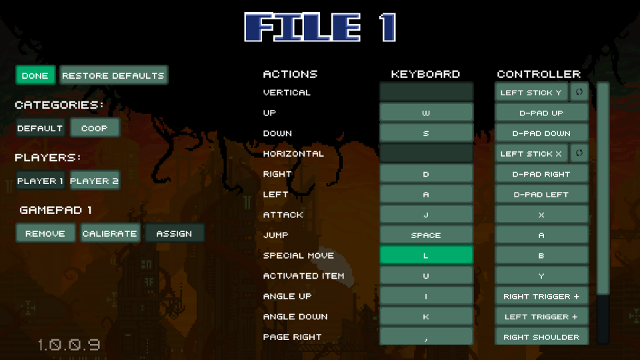 Buttons! You can rebind them and everything!

Just as A Robot Named Fight wastes no time getting us in the mindset of ‘shit’s happening, go battle meat monsters’, it wastes no time in getting us there — There are controls options, and a few empty ‘collection/achievement’ screens, but nothing that I would spend ten minutes describing in detail. We don’t have that kind of time, anyway! The pulsating silhouette of the Megabeast is always visible in the background. Bobbing, moving. Drawing… closer? We have to go now! 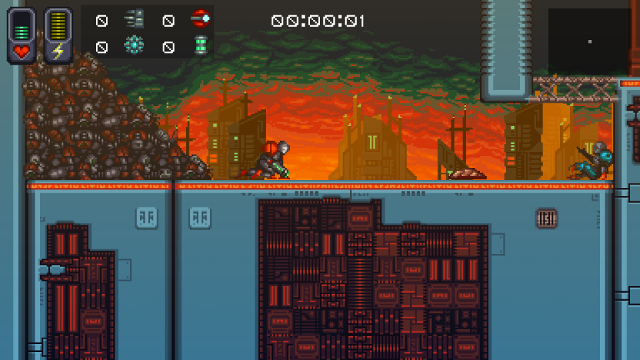 This slow crouch isn’t a hustle at all!

I hit buttons on my controller, any button, and slowly but surely my robot starts getting up. Shifts from a full crouch, into a half-crouch, into nearly standing… And then I’m up! Blaster arm extended. I fire at the grub.

The shot flies way over it, smacking into the wall behind us. 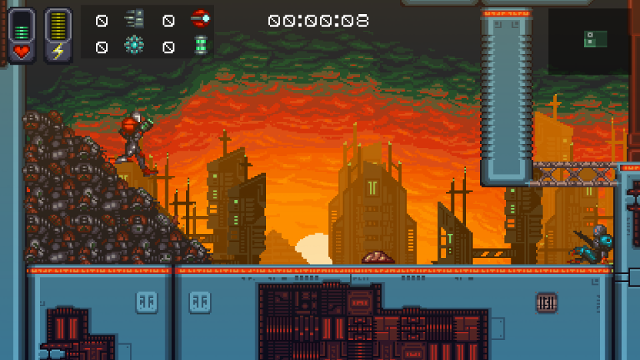 Time for plan B, then.

It takes a little messing around to figure out that I can control the angle of my shot, in 45°, using the right analog stick. It’s easier to do when jumping, which leads to some great shots of my robot aiming down between their legs while flailing over the grub. But eventually I figure out that the left and right triggers also work to aim half-up and half-down, and I finally get my shot. 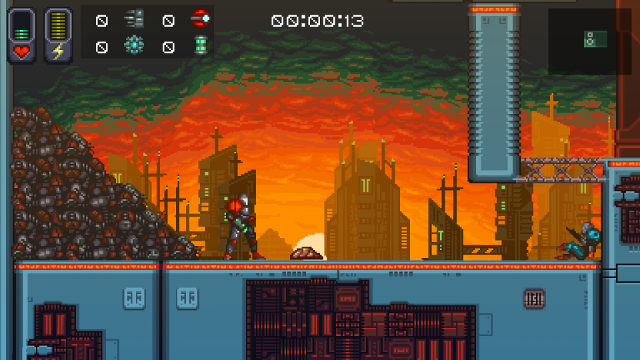 Time to finally talk to that disheveled-looking robot over there! I’m sure they’ll have a lot to teach me. Maybe even how to play the dang game? Or is this whole thing going to be a school of hard knocks? 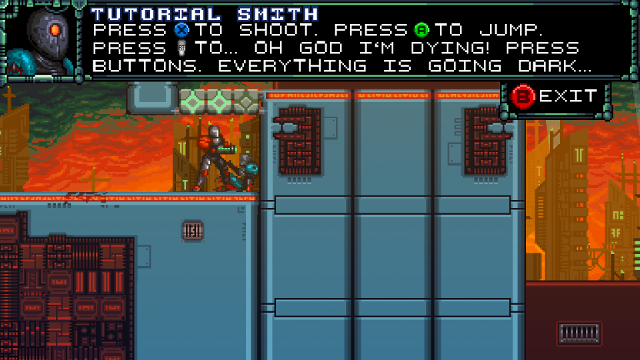 Well. I was half correct, I guess.

I shoot the weak-looking girders over my head, jump past them, and watch them rematerialize in the form of glowing green blocks. Useful to know. Then I proceed rightward. Some actually-sturdy girders block my the way, but every chain has its weak point, if you know what I mean.

See if you can figure out what I should do here.

Then I reach a Metroid door. I shoot it, and it opens, and I pass, and it closes. You know how this goes. A Robot Named Fight‘s early inspirations seem obvious; I wonder if I’ll turn into some sort of ball before long. But first, let’s hop some spikes, cross some paths, shoot some stationary meat eggs, and generally fail to find any sort of threatening opposition.

You think I’m joking, but I’m not. All I’ve seen in the rooms I’ve passed so far are environmental obstacles, the aforementioned meat eggs, and I think I saw some sort of beastie float in from off-screen… from the exact point I was shooting at, so I didn’t see much. The meat eggs actually rewarded me with floating green hearts, refilling the health I was missing — not all of it due to the grub. In fact, the toughest opponents I’ve faced so far are two doors that I can’t shoot open with my green plasma bolt: One covered in red lights and metal plates, the other in pulsating grey meat. 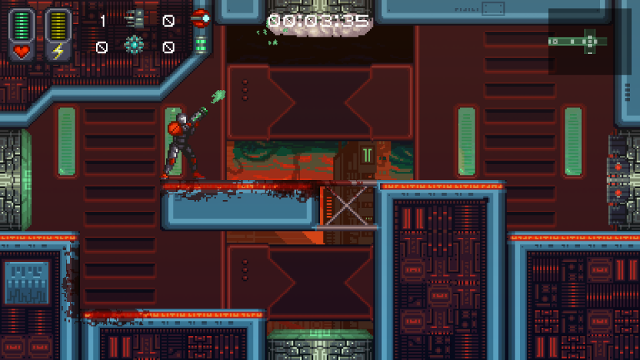 So, you know. I can probably expect some powerups or new moves later down the line.

I can only go down, so down I go. Two doors down, I find a powerup. 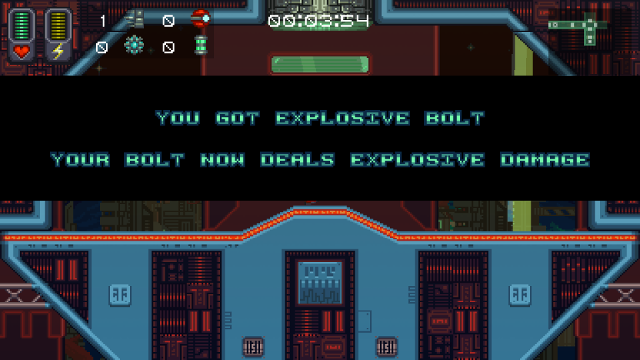 Hey, red lights and metal door! Eat rocket. That’s right, all my shots are rockets now. I feel emboldened with this powerup, ready to take on anything; this weird ceiling passage that I found by accident can’t hope to slow me down!

I guess the markings on those ‘walls’ suggest I can shoot them open? Should pay more attention to that in the future.

And I’m not afraid of you either, empty room with mysterious gloomy music! I’m sure that the vaguely red-tinted room I can see on the minimap right past you is nothing to be worried about. 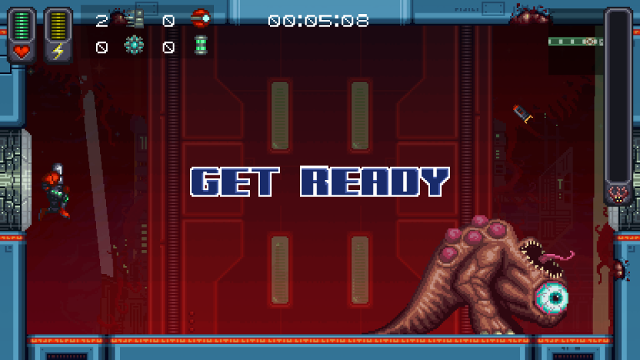 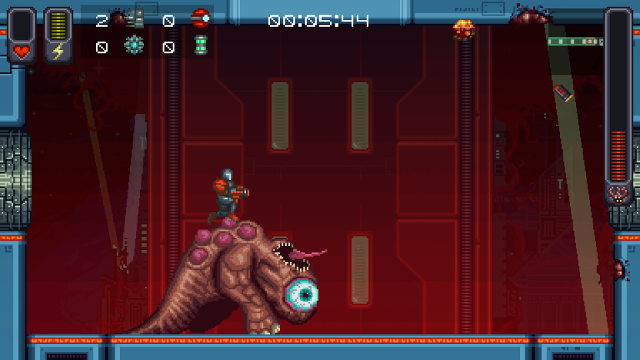 It didn’t go well for me.

Ah, well. Everyone messes up the first time around, right? Let’s see how far this sets me back. What do you think, starting room? Room right before the boss? That one did look appropriately ominous.

But what actually happens when I start my game anew is that I arrive somewhere completely different. 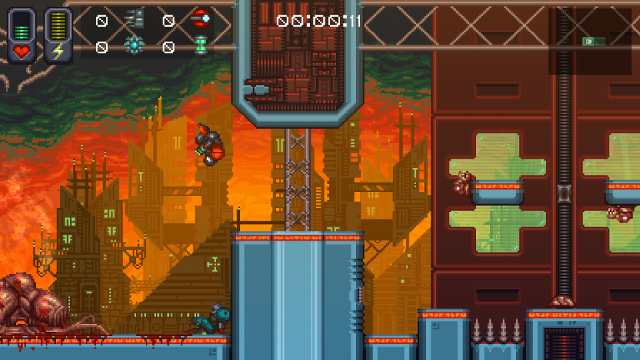 I can tell this is supposed to be a starting location, because Tutorial Smith is there. But otherwise… It’s nothing like where I was before?

Well, this is interesting. What’s happening here? It could be that A Robot Named Fight has alternate starting locations, but that doesn’t really scan with the whole Metroidvania idea. Unless… Some of the later rooms I enter this time around are basically identical to rooms I saw earlier. Like the hidden ceiling passage one, which is actually identical. Except it starts from and ends in a different room. Is this… a Metroidvania roguelike? Now that would be a mean feat.

If I hadn’t played this game once before, I wouldn’t even have known anything was up. The level layout is different, but it scans all the same. The monsters are different — there actually are monsters now, dozens of them — and the doors are different, which is reflected in the fact that I don’t find the Explosive Shot this time, but a ‘Phase Shot’ that goes through walls. 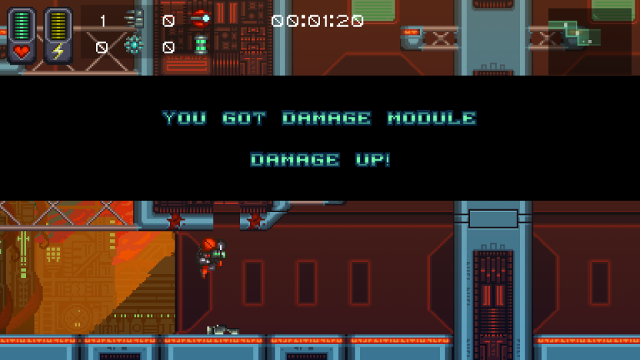 As well as a ‘damage module’, that was apparently hidden in this one random destructible wall bit. I only found it because I was shooting everywhere.

I do eventually get to the same boss. But even here things are different, because I beat it instead of the other way around. For my efforts, I get… Some hearts, which are nice, because I was pretty low. But more importantly, I learn that from this moment onward ‘the Auto Turret has been unearthed and will appear in future playthroughs’.

That clinches it then, huh? A Robot Named Fight is a Metroidvania roguelike, with unlockable gear elements. That’s… very interesting. 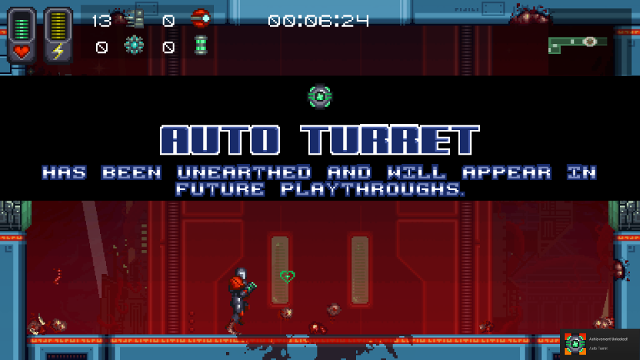 That’s not even sarcasm, I’m genuinely interested how this plays out.

I survive my current run for another twenty minutes, during which I collect a slide ability, a speed module, and ‘Shield Orb, the Orb That Shields’. I also beat a second boss, a giant fly, which unleashes the Bright Shell upgrade into existence. I finally bite it in an underground factory complex, battling off giant meat worms and incorrectly relying on Shield Orb to actually Shield Me. I don’t know why I made that mistake. 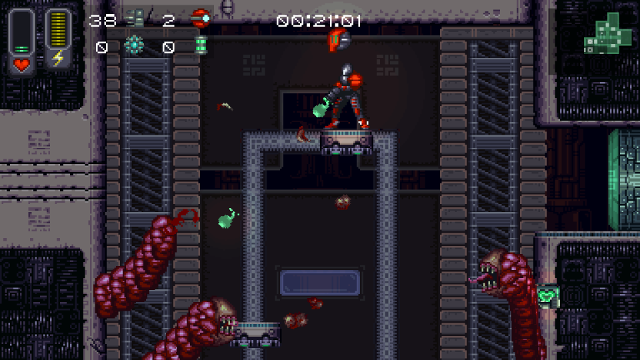 But yeah, now that I understand this game’s design… I’m into it. I want to see how well the seemingly incompatible design drivers of roguelikes and Metroidvanias work out together in the long run. I’m hoping to find some cool new gear. The level and enemy designs have been pretty dope so far. And… Dare I actually try and kill the Megabeast? Only time will tell, I suppose.