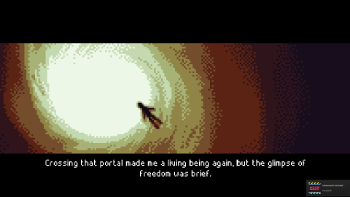 Well then. That was certainly an enjoyable two hours of running, jumping, and dying over and over. It felt longer than that, honestly! But not in a bad way; it feels weird that I got everything I got out of Necrosphere in only two hours. Good things and small packages, you know what they say.

In case this second-page segue wasn’t clear enough, let me explicitly say that I enjoyed my time with Necrosphere. I have a soft spot in my heart for games that don’t try to be more than they are, which sounds like an odd qualifier if you’ve never seen a AAA game overload itself with systems and features. Necrosphere is an incredibly compact experience, like I said, a let’s say 2-to-3-hour party of jumping and dying and flipping switching and maybe, cursing. It’s precise puzzle platforming brought back to its roots, focused only on making tight jumps and getting timings right, with only the barest nods to things like combat and optional collectibles. All its polish has gone into making puzzles that are usually just this side of challenging-but-fair… into that, and into the soundtrack, which provides a variety of great atmospheric accompaniment in the hub zone and all levels but one. All levels but one. You’ll know which level’s the outlier if you play it yourself, but here’s a small teaser: Did you guys that literature occupies the same relationship to life… that life occupies to death? 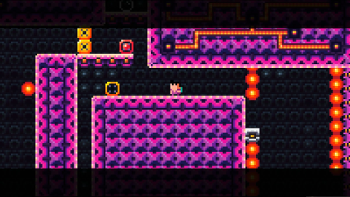 No, you don’t know what this means yet. Don’t fret about it.

The most impressive mechanical aspect of Necrosphere is how much mileage it manages to get out of just two buttons. That’s right: Everything you’ll ever do in Necrosphere is done using the two directional buttons, A and D / Left and Right. You probably saw coming that the whole game wouldn’t literally be ‘move left and right and fall down pits’, even though Necrosphere still manages to craft a lot of puzzles around that basic idea. But the movement powerups you find are still tied to those same controls. Like the ballet suit, which grants you a leaping dash by double-tapping either button. Or the jetpack, which propels you straight up if you hold both buttons down. Or… But let’s not spoil everything yet.

There’s no dedicated jumping. Just de nada. I guess that’s Necrosphere‘s second most impressive mechanical aspect. There is jumping, mostly tied to the gravity air bubbles and moving platforms, and later on to your jetpack. But your character in and by himself doesn’t have jumping capability, not in the way you’d expect in a puzzle platformer. This is something that took a little getting used to; I kept thinking that surely the next powerup would be ‘gravity boots’ or something. But no. I’ve since come around to liking this choice, as it gives Necrosphere a pretty unique mechanical flavor. This game’s puzzles require a skill set that, while fairly close to traditional platforming mores, requires its own grace period of training and getting used to. As someone who enjoys learning new stuff in games, that’s something that appeals to me.

And as someone who enjoys seeing minimalist choices be used for design effect, I really appreciate what Necrosphere does. Again, it’s its own beast. Especially in the beginning, you never feel quite in control of the situation, not in the way you would if you could jump. Since vertical movement is tied to environmental objects and obstacles, it never stops feeling dangerous, burst-y and unpredictable. And while Necrosphere uses a small set of obstacles as action verbs, it combines those verbs into really interesting and innovative effect — It does things with jumping bubbles and spikes and timed gates that I don’t remember seeing any recent game do. Inversely, once you obtain the jetpack, an incredible new perspective opens up on the world: Puzzles that were once tricky and weird can be now be minimized or skipped outright.

Of course, that’s when Necrosphere hits you with the really difficult puzzles. Anyone who thinks that ‘simple set of controls’ equals ‘simple challenges’ has never used controlled jetpack bursts to recharge midair dashes so they could reach a gravity bubble before a sentient fireball caught up, that’s all I’m saying. 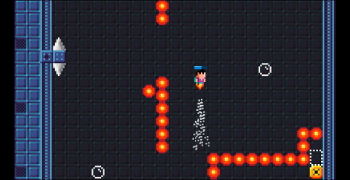 It’s not as hectic as it sounds. It’s worse.

While Necrosphere makes some light explorable-world overtures, it’s primarily a linear experience, which is fine and honestly what I’d expect. There is a hub, from where you branch out into three of the four levels and in which you are deposited, unceremoniously, after each one — for narrative effect, of course. As you unlock new powers, some small exploration options open up in hub and levels: These primarily let you collect the 20 ‘DVDs’, the game’s only nod to optional collectibles. As far as giving the player a sense of exploration goes, it’s basically fine. The hub is usually laid out well enough to funnel movement into the requisite places every time you return with a new power. And I actually dig that returning to old levels with new powers lets you see to what degree Necrosphere does and does not ‘cheat’ in its level layout. There are parts of the earlier levels that you can’t see because the camera just doesn’t scroll up there. But once you return with the jetpack… 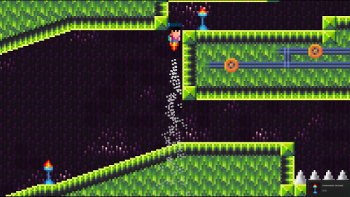 Hey, this was here all along! That’s neato *and* burrito.

There’s one big exception, and this is one of my only three serious complaints about Necrosphere. The hub funnels you really neatly into three levels, but there are four levels. The fourth level… Let’s just say it took me a lot of hub-trawling to figure out where to go. Because it’s not there. This is technically a major mechanical spoiler, but I guarantee you won’t mind: The entrance to the last level is hidden in one of the earlier levels. It’s shown to you rather overtly, but at a time where you don’t have the knowledge yet to really understand what the game is telling you. It’s entirely likely that you’ll have forgotten all about it when the time comes to actually go there — I certainly did. Necrosphere really makes no affordances to this: My guess it that it assumes you’ll just ‘redo everything’. I’ll be honest: I might have given up before actually reaching the fourth level, if I didn’t have access to my obsessive screenshot-taking as a giant archive of everything that came before.

Which would’ve been a shame, because the last level rules. The last puzzle in particular is amazing. You know how so many platforming games include combat and boss fights to have a ‘suitable’ final showdown, instead of just relying on everything they’ve built before? Prince of Persia: The Sands of Time was rightfully praised for having a platforming segment as the real final challenge of the game, with the ensuing ‘boss’ intentionally being a pushover. Necrosphere skips even that, and hides game completion behind some of the most intense twitch platforming I’ve ever played. 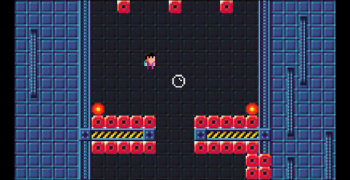 I know this doesn’t look every hard, but…

Necrosphere really makes no affordances for lost players in general, which is complaint number two. There’s nothing to guide you, in a locational sense; there’s no map. This is super frustrating when trying to comb the levels, particularly when revisiting the levels you’ve done before to try and find DVDs. It seems like such a strange this to leave out. I’m sure it was intentional, to tie into the game’s minimalist design and ‘increase challenge’, but unlike the tight puzzle challenges that make the game fun, ‘working your way around boring familiar terrain’ is something Necrosphere could’ve used less of. Doubly so because you can’t actually ‘save and quit’ a level you’re in, even if you’ve completed it before: Once you enter a zone, you have to make your way to the end.

And if at this point you’re asking, ‘why not just save on beforehand’… Well, funny story about that. Two days ago, I would’ve told you that Necrosphere only does checkpoint-based auto-saving. It definitely does do checkpoint-based auto-saving. But I discovered in the poorest way possible that the ‘Save and Quit’ menu option functions like a state-based manual save. Which I discovered, because…

Well, picture this. I was at the end of the game, past the final puzzle, in front of the final door. On the other side of the door was one more DVD, and I knew I’d unlocked some alternate path to (probably) another DVD that I could get to by avoiding the door — and then coming back later. I tried to dash past the door to get the DVD, but got too close, triggering the screen fade that leads to the end. I hit Save and Quit to start over…

…And now, whenever I select Continue on the main menu, it returns me to that exact point. Milliseconds away from the game ending. 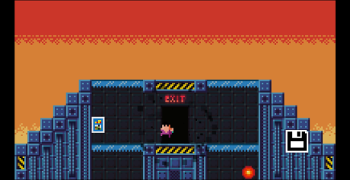 Imagine Groundhog Day, except the day only lasts three eyeblinks.

I didn’t actually have any desire to collect all the DVDs. And ‘getting stuck into seeing the ending’ is benign, as far as weird bugs go. It’s definitely not enough to subtract from the overall positive, challenging puzzle platforming experiences I’d had just before, often curse-inducingly frustrating but never quite straying into bullshit unfair. And I guess it wouldn’t even take that long to replay the whole thing, if I were that to the idea of seeing that last alternate path.

Still, though. Be careful where you save, I guess.

If this seems like a short review, that’s because Necrosphere is a short game to describe. Not necessarily short to play, depending on your own platforming skill curve and resistance to spike death and sentient fireballs. But it really is what it is: A difficult puzzle platformer controlled with only two buttons, combining a decent pixel aesthetic with a cool soundtrack and using interesting powerups and obstacles to avoid genre cruft and expectations. For only five bucks, you could do a whole lot worse. And I haven’t even probably looked into the unlockable bonus mode, which (from what little I’ve seen) seems like a set of master challenge puzzles themed around a bad dream. Who knows, there might be even more puzzles after that. I’m avoiding this part of the game for now because playing Necrosphere for as long as I did has already overloaded my left arm’s RSI risk. But if your body is still wear-resistant, and if you’re looking for a cool take on challenging platforming in a weird, unspecified afterlife, Necrosphere definitely delivers.

Final update: Regular readers might wonder why the thumbnails in this piece are about half the size they normally are. The answer to that is… I honestly have no idea. I was trying to get them to fit better. Didn’t work out. What does everyone think? More readable this way? Less?

Jarenth still wants to play zombieball, though, God’s honest. Brainstorm game ideas with him on Twitter or hang out with him on Steam. And if you dig Indie Wonderland and Ninja Blues in general, why not consider supporting our Patreon campaign?