If you had me guess from the title alone what sort of game Necrosphere, my first shot would be — and I admit there’s some degree of wishful thinking in this — a ball sports-type game played exclusively by the undead. I know I can already get something like that in Bloodbowl, but listen: I just want to see teams of shuffling try to do fancy football tricks. ‘Necrosphere‘ sounds much more dignified than ‘Deadball‘.

My second guess would be ‘probably some sort of 2D indie platformer’, because that’s just a safe bet in this day and age and gaming environment. Which means I’m up for the silver medal in ‘reading Cat Nigiri‘s mind, so. That’s still pretty good.

Well, this is immediately interesting: I can’t actually take screenshots of Necrosphere. Well, not any easy way: Nor Fraps, nor Steam, nor GeForce experience will let me. A quick chat with the person handing out the Steam keys suggested that Necrosphere basically runs in a modified Google Chrome window, which none of these programs are inclined to catch. We hashed out a solution though: I’ve used OBS to take video recordings of my play sessions instead, and I’m grabbing screenshots from those. Yeah, I know. This also puts me in the unique position of being able to upload the video itself, so if you want to play along at home with the first page of this review, then here you go!

With that out of the way: 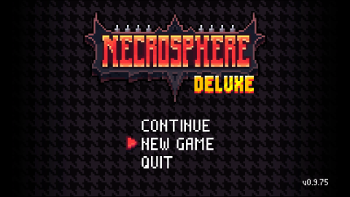 Necrosphere! It’s grim, it’s moving, it’s got pumping electronic support music. What else do you need!

No options, huh? That’s just not how Necrosphere rolls? That’s fine, that’s fine, I can handle it. Who knows, I’m playing version 0.9.75; maybe options are added in the gold release. Should already have happened by the time this comes out, but for us here in the distant past: No way to go but forward. 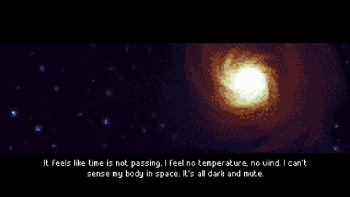 In brief stills, I get the whole backstory to Necrosphere. It goes like this: I’m a police officer of some stripe. I’m probably dead! There was a shootout with me, and my main dudes Tara and Markus… 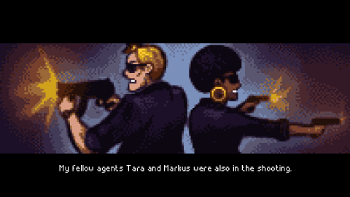 …and then I got shot. And rushed to the ambulance. It didn’t look good.

And now I’m dropping down some weird dungeon. 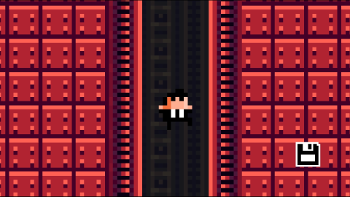 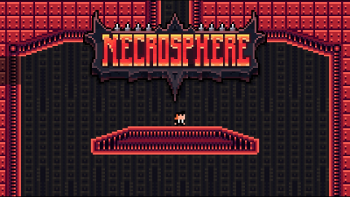 As my little bespoke pixel dude hits the ominous red blocks, the electronic music kicks into high gear. The title fades into view: Necrosphere. I have no idea what I’m doing.

I’m hitting buttons! Both left and right arrow and A and D do what you’d expect, which is move my character left and right. Other buttons… don’t do anything. As far as I can tell there’s no jump, or duck, or slide, or shoot. Just… moving left and right. Good thing there’s no no chest-high walls in this landing zone.

So left and right I go, which in practice means down. There’s a whole pathway leading down, in fact, in drops and angles and openings in the floor. I can see some openings in the walls, too, adorned with fancy… I learn that these are torches, or light sconces, when I pass one and it catches fire. Would love to get the other one too, for symmetry’s sake, but unless I missed a button earlier this little gap will be forever out of reach. 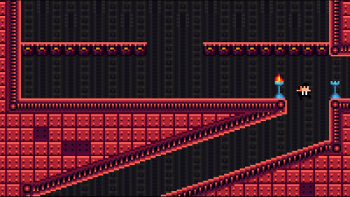 Down I go, and down I go, and… Ooh, a message. I find a floating piece of paper, also man-sized, containing a message from Tara. You’ll remember Tara as one of my main dudes. Tara tells me to ‘not fret too much about being dead’. 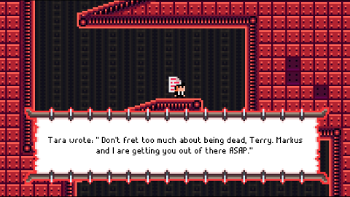 I think I *will* actually fret about this, thank you very much.

One area down, I do actually find some chest-high walls. Or walls three times the size of an adult man, if you want to be pedantic. For a moment, all progress seems lost. But wait! The wall made of weird blue squares is actually a door! And it opens when I slam myself into it! How convenient. 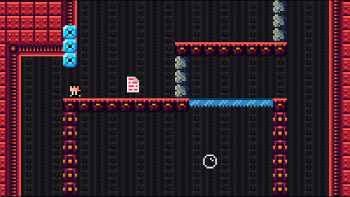 This would have been a short game otherwise.

Down even further, I run into some giant bubbles. And what do these bubbles do when I run into them? You guessed it: They launch me upward, in a mechanically-assisted simulacrum of jumping. 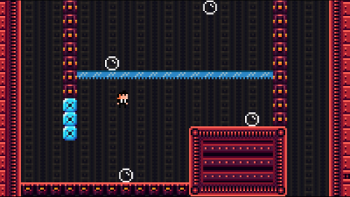 I’m starting to see the shape of this a little. I can’t jump, but there are bubbles that make me jump. Sometimes the bubbles move on their own accord. I can’t interact with walls, but some doors automatically open. These blue floors are permeable from underneath. These fire orbs are… You know what, I’m gonna go ahead and guess that these fire orbs are to be avoided. I didn’t watch a gameplay trailer for this game or anything. Same thing with the giant spikes littering the floor. In any such case, there’s a lot of carefully-timed jumping and obstacle avoidance going on in here, and so far I’m digging it.

I don’t really know what I’m doing yet, though. What’s my goal? Where do I go? 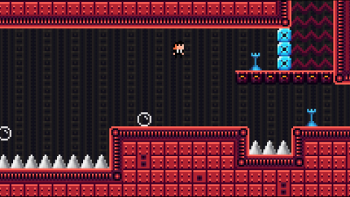 ‘Two roads diverged in Hell, and I//I took the one less spiky, guy’

In the distance, a floating piece of paper glares disapprovingly. 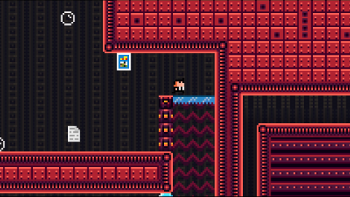 I slowly piece together some backstory as I traverse the area. I’m dead, yeah, for certain. Happens. Dead people go to the Necrosphere, which is basically an eternal limbo of solitary awareness. And rad jumping puzzles. My mission, should I choose to accept it: Find a portal out of the Necrosphere, back to the Normalsphere.

I refocus from thinking about the story to find that, in the process of exhausting all possible paths, I’ve found something interesting. 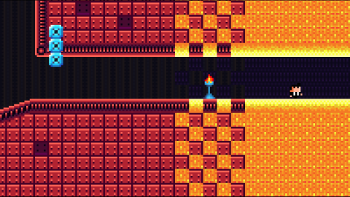 Is this the portal home?

A new zone in the Necrosphere.

In this new yellow zone, the music changes to a more subdued industrial beat, as I fall down once more. I don’t know why, but I get the feeling this is sort of a ‘first level’. Maybe it’s the new puzzle elements, like switch-activated red gates and more involved bubble jumps. Maybe it’s the scene transition. Maybe I’m just savvy like that. 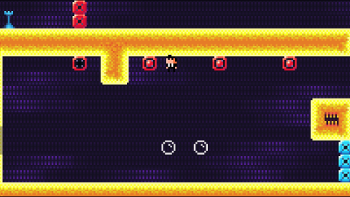 You hit the red button and then the gate stays open forever. I’m sure all gates will work that way, forever.

I play in the yellow industrial sand zone for all of eight minutes. That’s how long it takes me to beat it. Breaking with my own protocol, I’m not gonna detail everything here (though watch the aforementioned video if you do want to see it): It feels like a fool’s exercise to describe an escalating series of jumping puzzles in text. ‘And then I jumped, and I fell. And I jumped again, and I fell again. I jumped and I jumped; I fell both times.’

I will show you, however, the moment that Necrosphere really clicked for me, and went from ‘cute series of weird puzzles’ to ‘okay, this has potential to get pretty good’: 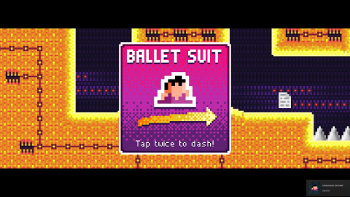 With the ballet suit equipped (actually equipped), my guy now has the new power to dash-jump. Ballet-style. Tapping either left or right twice dashes me a significant horizontal distance, and a little vertical bit too. Necrosphere wastes no time in teaching me that this is useful for overcoming fire balls and spike pits, yes it canwill use it in the air if you’re wanting to get out of this place. 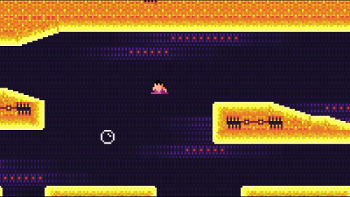 And you know what? I’m committed to finding that exit now. Or at least, I’ll remain committed, as long as the puzzles remain challenging-but-fair, and the upgrades silly-but-useful. I know games like this: I’ll be shooting endless walls of spikes with my Grim Blood Gun before long. But Necrosphere has a strong presence so far, so you know what, again? I’m willing to see if it can bring it home.