Has there been any game about RPG shopkeeping since 2007 that landed quite as well as Recettear? I’m wondering. I know more games do exist in that particular hyper-specific niche: I remember playing Holy Potatoes! A Weapon Shop?! (review here), and I’m waiting for Moonlighter with pretty baited breath. But has anything so far made a similar splash?

I find myself thinking these things as I watch the Steam download bar for Pixel Prototype‘s Pixel Shopkeeper, the genre of which I think you can probably intuit now. I want another RPG shopkeeping game to make the same splash as Recettear, because Recettear ruled. Maybe Pixel Shopkeeper will be the one?

Only one way to find out.

Well, this is definitely… a title screen. I don’t know what I like better: The splash of unsorted colour on a mostly grey background, the hyper-cheerful music, or the pink creature running across the title bar, quipping bad quips when I click on it but never ever stopping. 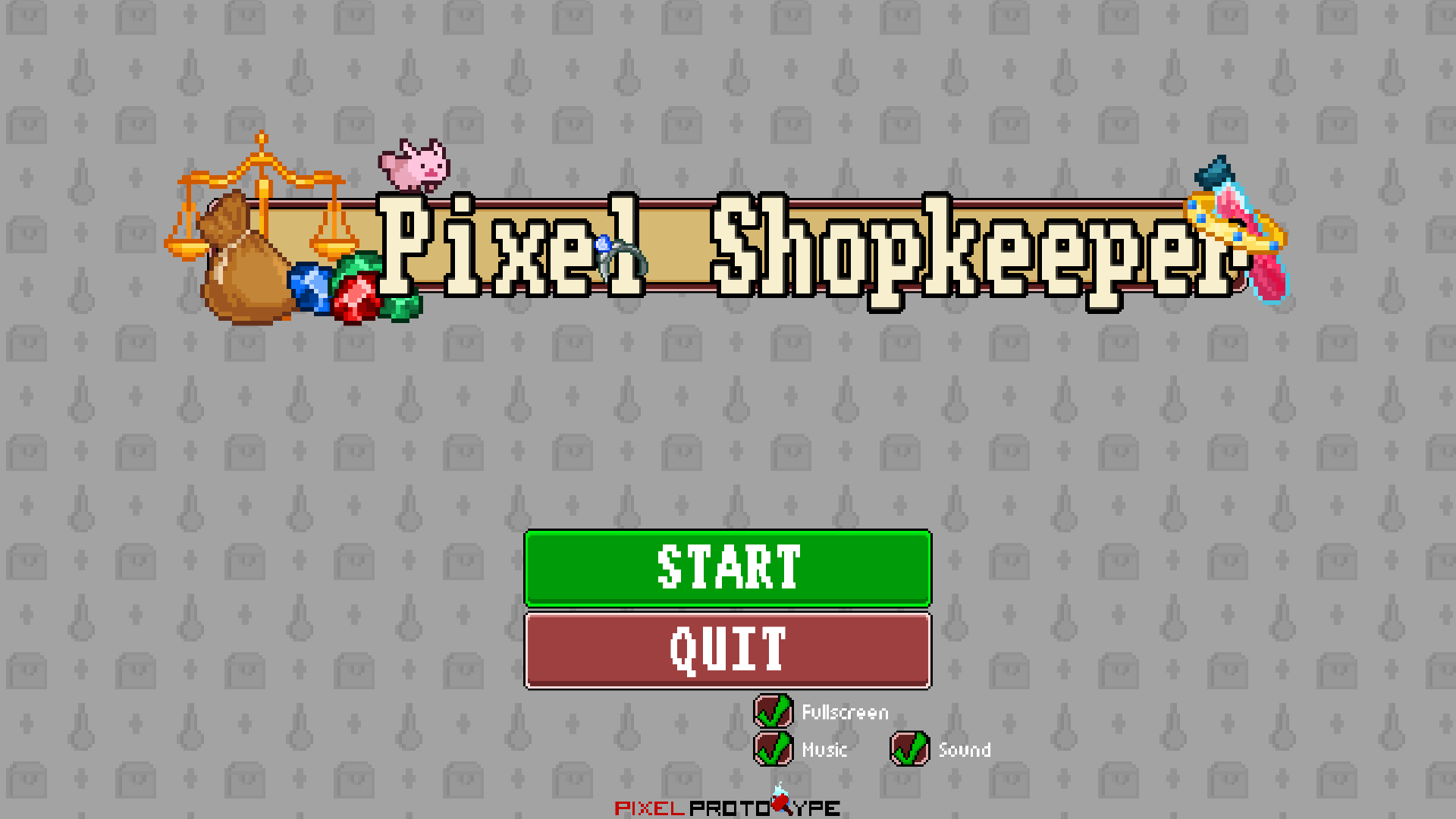 All of this could have worked, *except* for that grey background. It’s such a weird eye sore.

There’s, er, not a whole lot for me to click around here. I can turn the music off from the title screen, so thank god for small mercies, and I guess the fullscreen toggle is the extent of this game’s graphics settings. Big green button for START, big red button for QUIT — at least the onboarding is okay.

I select a save file and am prompted to make a character, which is actually more involved than I would’ve suspected. First off, there’s a pretty decent range of hairstyles, outfits, and colours to make the pixel shopkeeper of my choice — I end up making a pretty decent Jarenth simulacrum. There are difficulty settings on this screen as well, which suggests that difficulty is character-specific, not game-wide. 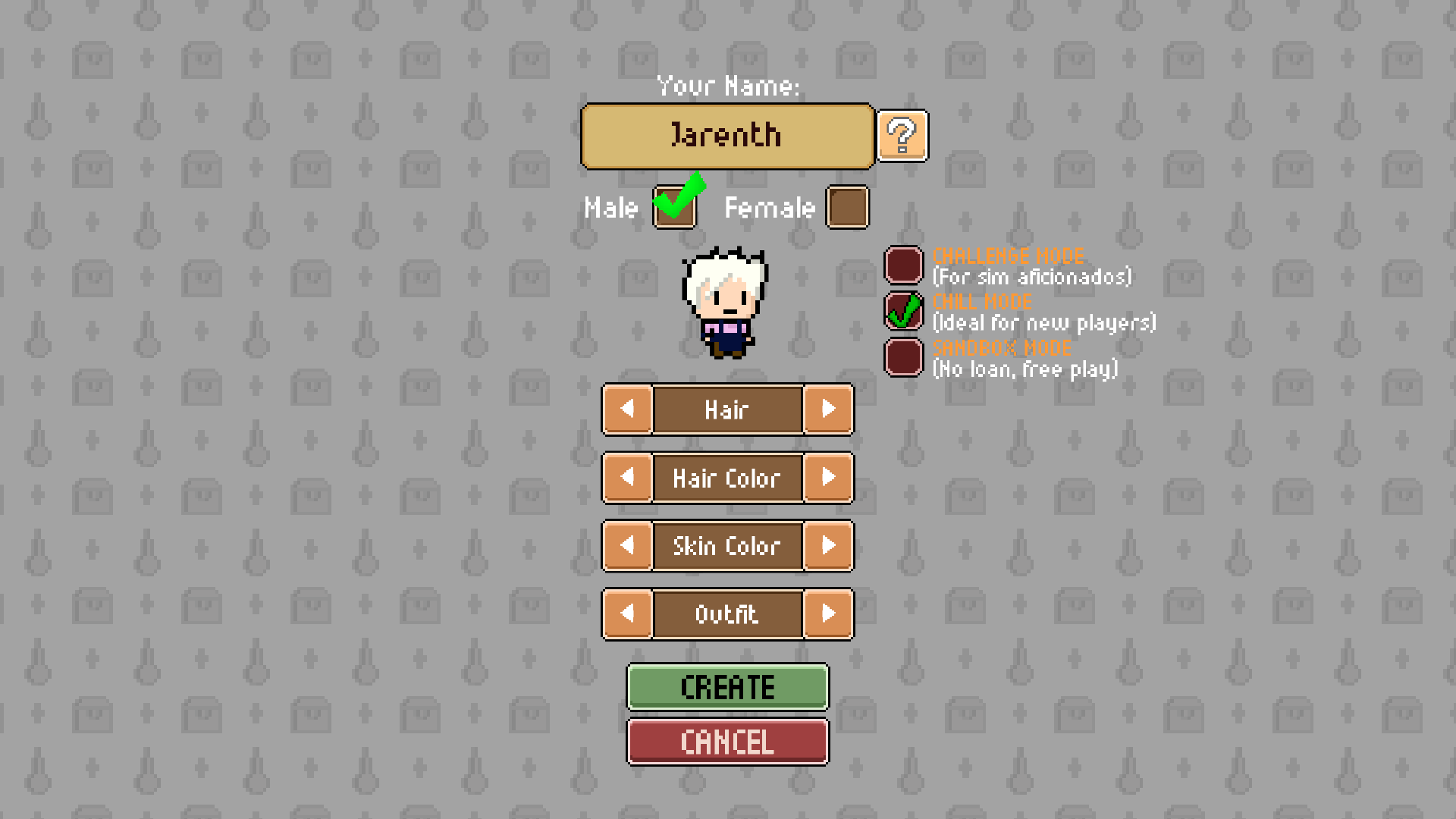 I *will* play in Chill Mode, thank you very much.

Second, I get to pick-and-mix my shopkeeper a backstory. Such as it is. What is my dream, what do I value most, and what kind of pet would I prefer? These are pretty tough questions, Pixel Shopkeeper. What is my dream? 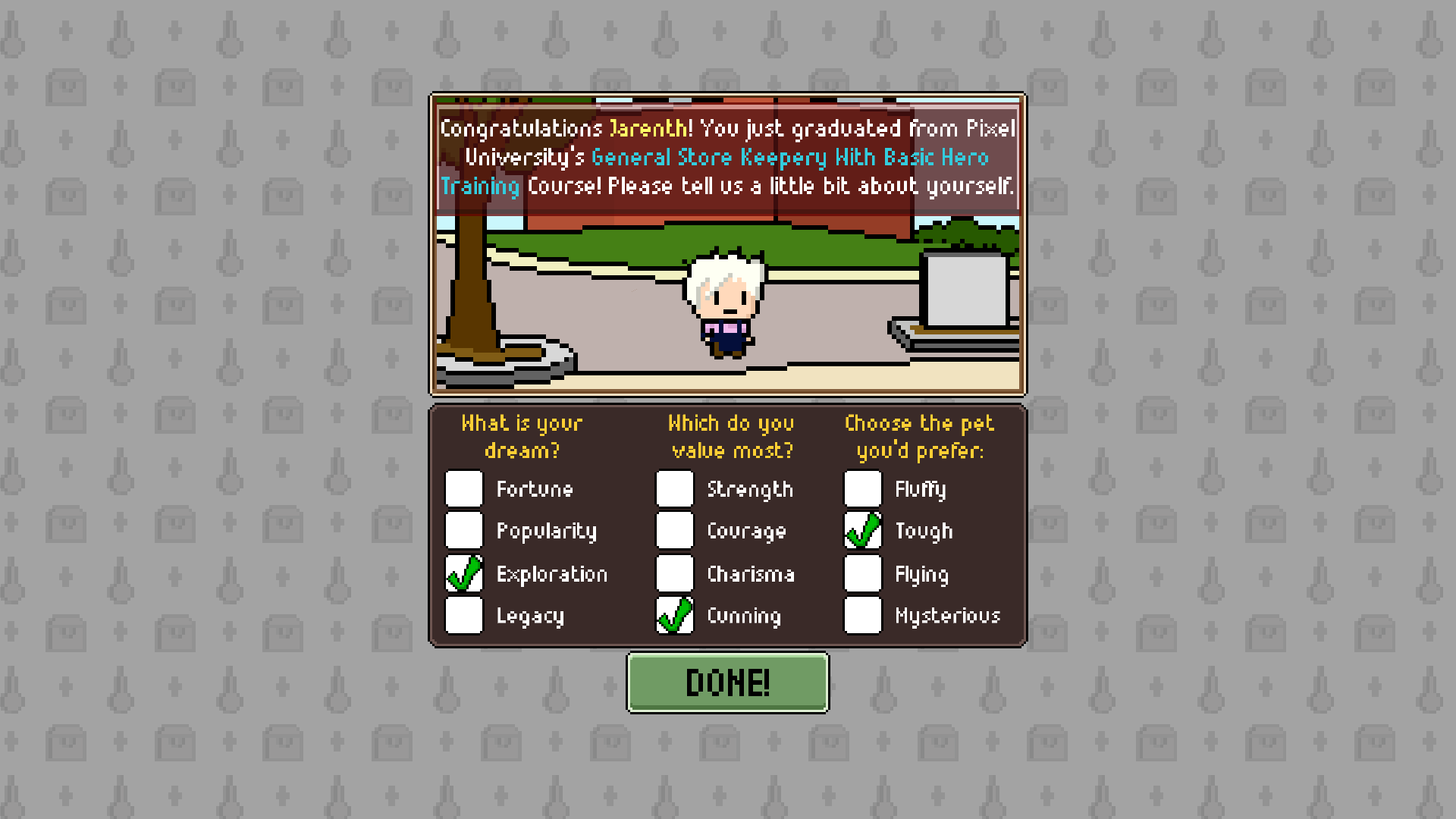 None of these *particularly* appeal to me, but I’m making the best with what I have.

Can’t wait to see how these choices influence the unique and meaningful path my characters takes from ‘Pixel University’ to owning his own shop! 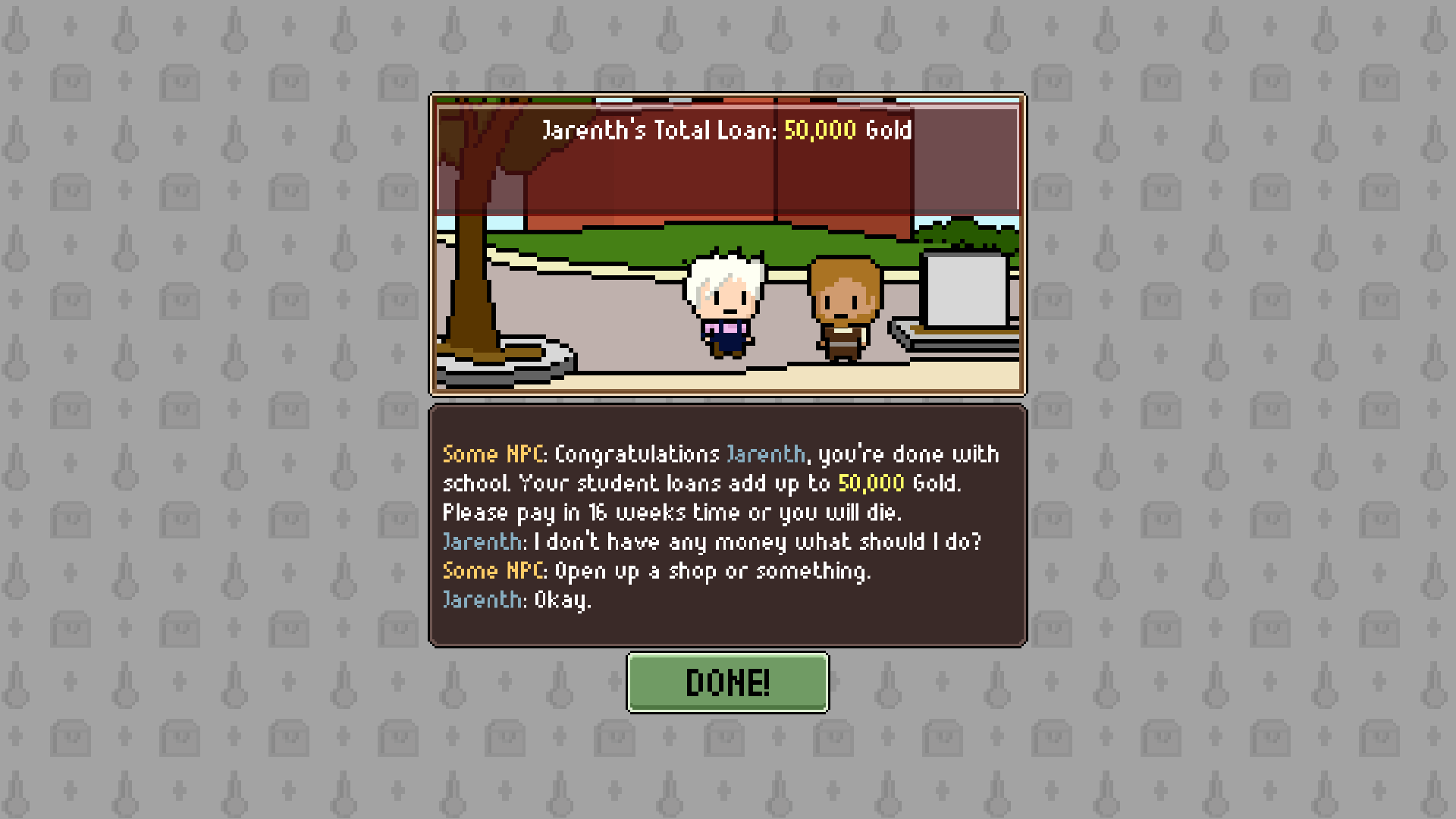 I hope on a bus with money I don’t have and travel to World Map. Time to see what kind of adventure I committed myself to here. 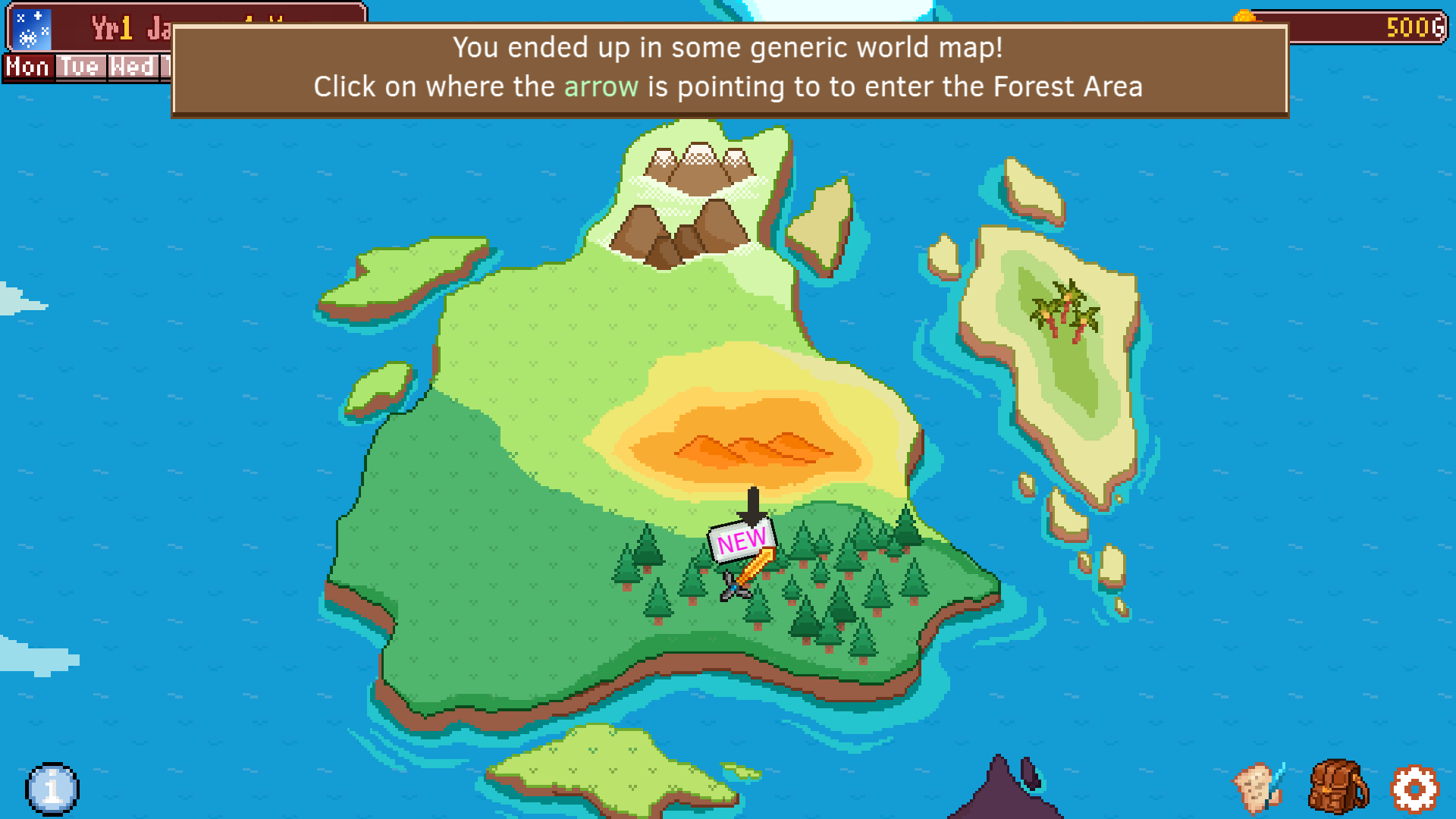 Well, okay. Welcome to Generic World Map, I guess. It has no cities, or any centers of population where one might expect a shop to flourish, but… at least it has an ice island? Close to a desert?

“Click on where the arrow is pointing to to enter the Forest area,” the game tells me, and I choose to overlook the ambiguous could-be-error and just do it. This brings me to the Dungeon Selection screen. 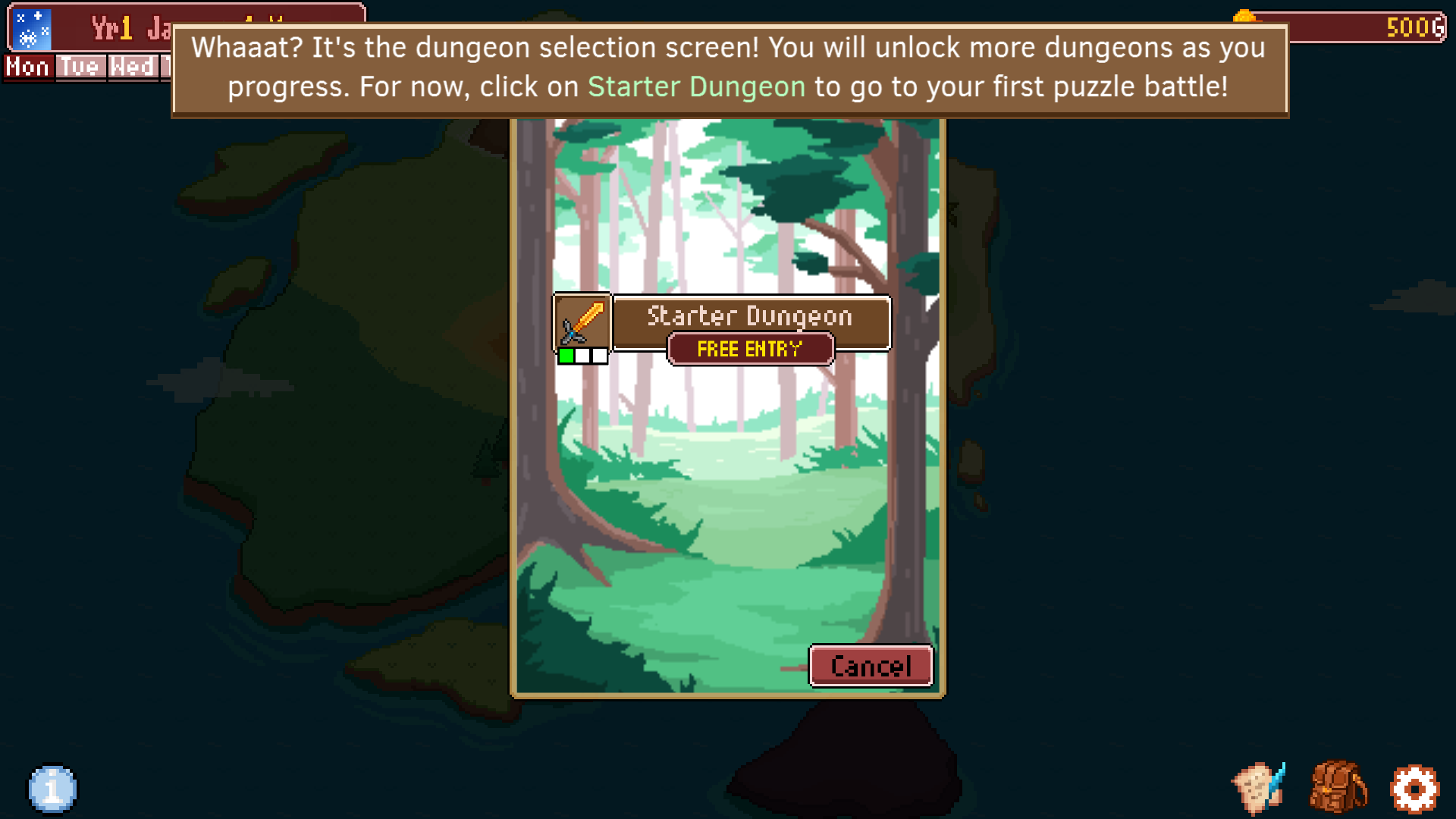 Which the game is inordinately excited about, for some reason.

There’s a particular style of tutorial that I’m less fond of, and that’s the style that involves dragging players through a rollercoaster of barely-involved choices. A lot of ‘do this because I tell you to’, without the assorted ‘here is why that works’. Pixel Shopkeeper is impressing on me a love of this style, as it tells me to ‘just click this button, there’ll be more later but listen don’t worry about it‘.

And what can I do but obey? 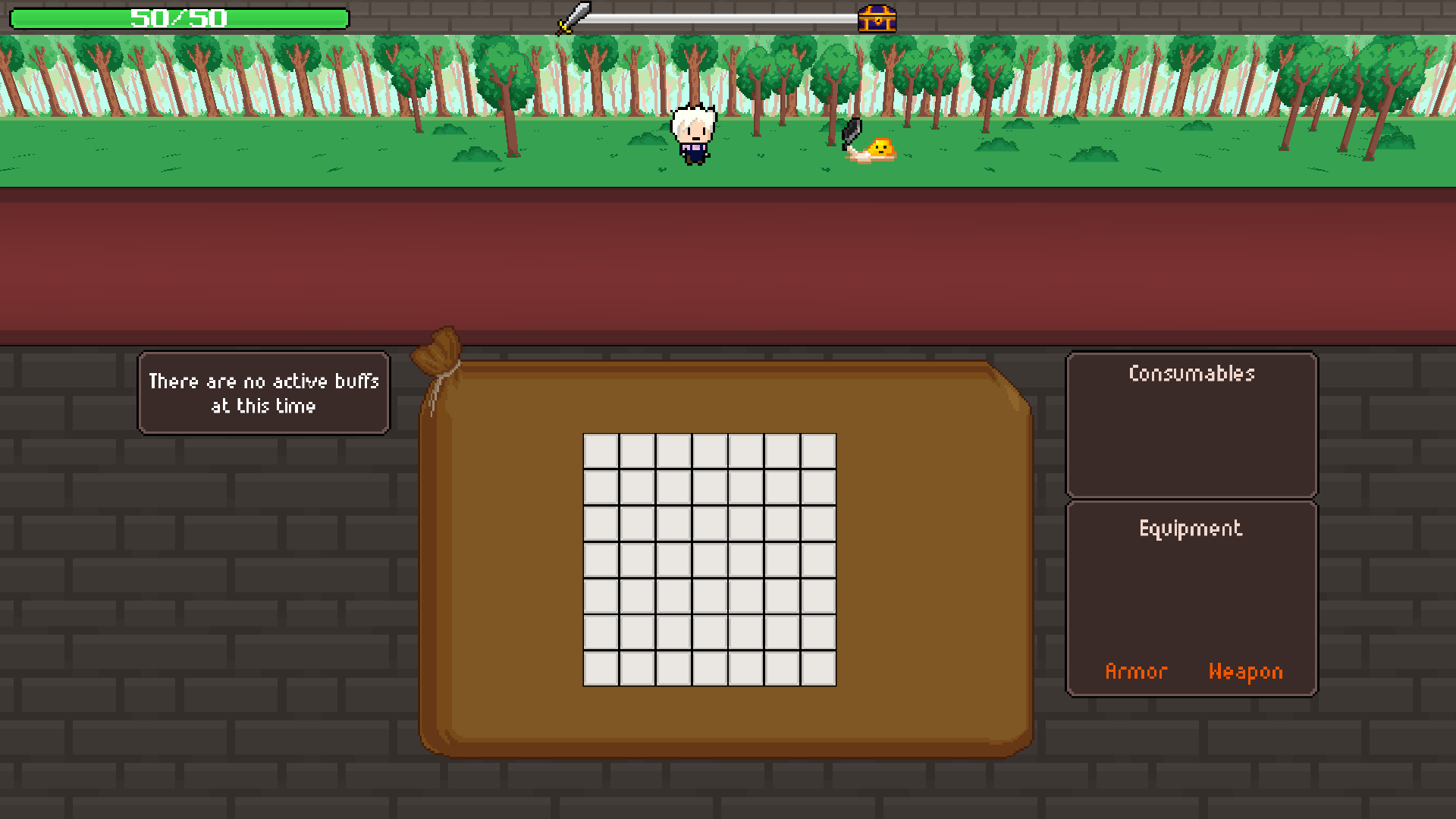 In a big pre-action text box, Pixel Shopkeeper explains how this is going to go. That’s me, on the top of the screen: I’m going to be running through the Forest Dungeon, which so far mostly looks like a normal forest. And when I say ‘I’ will be running, what I mean is that ‘my character’ will be doing so. Lil’ Jarenth is carrying all the responsibility of navigating this 2D forest, and fighting enemies with a giant sword that I don’t remember selecting. Enemies like… an over-easy egg wielding a frying pan, I guess. Lil’ Jarenth apparently has some stats, like Strength to determine hit power and HP to determine hardiness, but none of this is so far under my control. He’s just… going. He’s running right now, as we speak!

So then what do I do? Every time Lil’ Jarenth beats an egg monster — there are a lot of sentient fried eggs in this forest — they drop a handful of items. The first egg drops two batches of herbs, and a patchy wizard hat. My job is to take those items, and then, fit them in my bag. Our bag. Listen, I’m not sure what the relationship between me and Lil’ Jarenth is supposed to be; far as I can tell, I’m currently playing some sort of ethereal helper pixie. 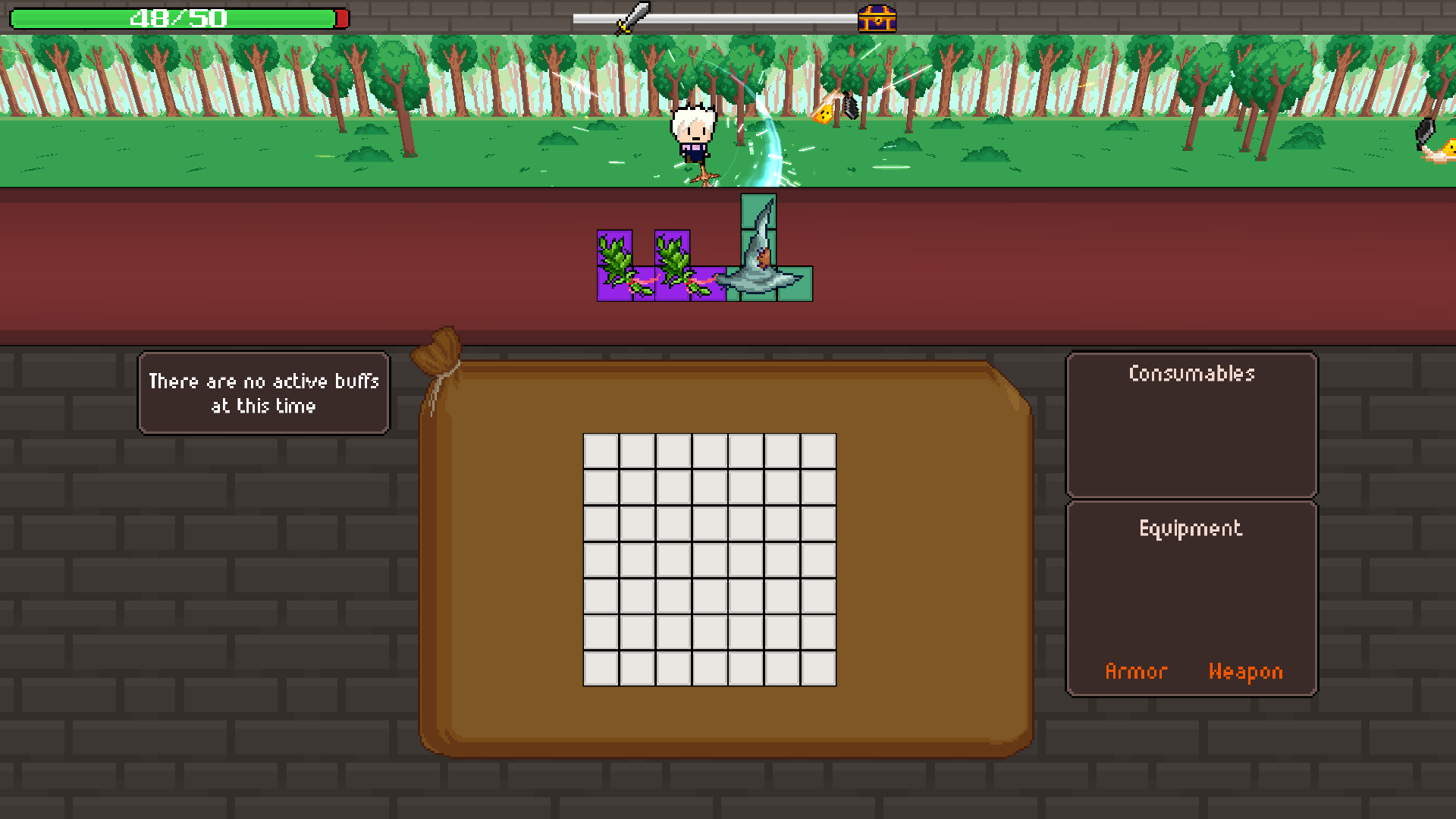 The whole process of running through the forest takes about… thirty seconds, give or take. I’m still busy trying to drag a boot and a helmet over to the bag when Lil’ Jarenth apparently beats the final monster, and three treasure chests pop up. I open one up, and two more mage hats pop out, while in the distance the shoe and helmet I didn’t pick up quietly fade into the background. 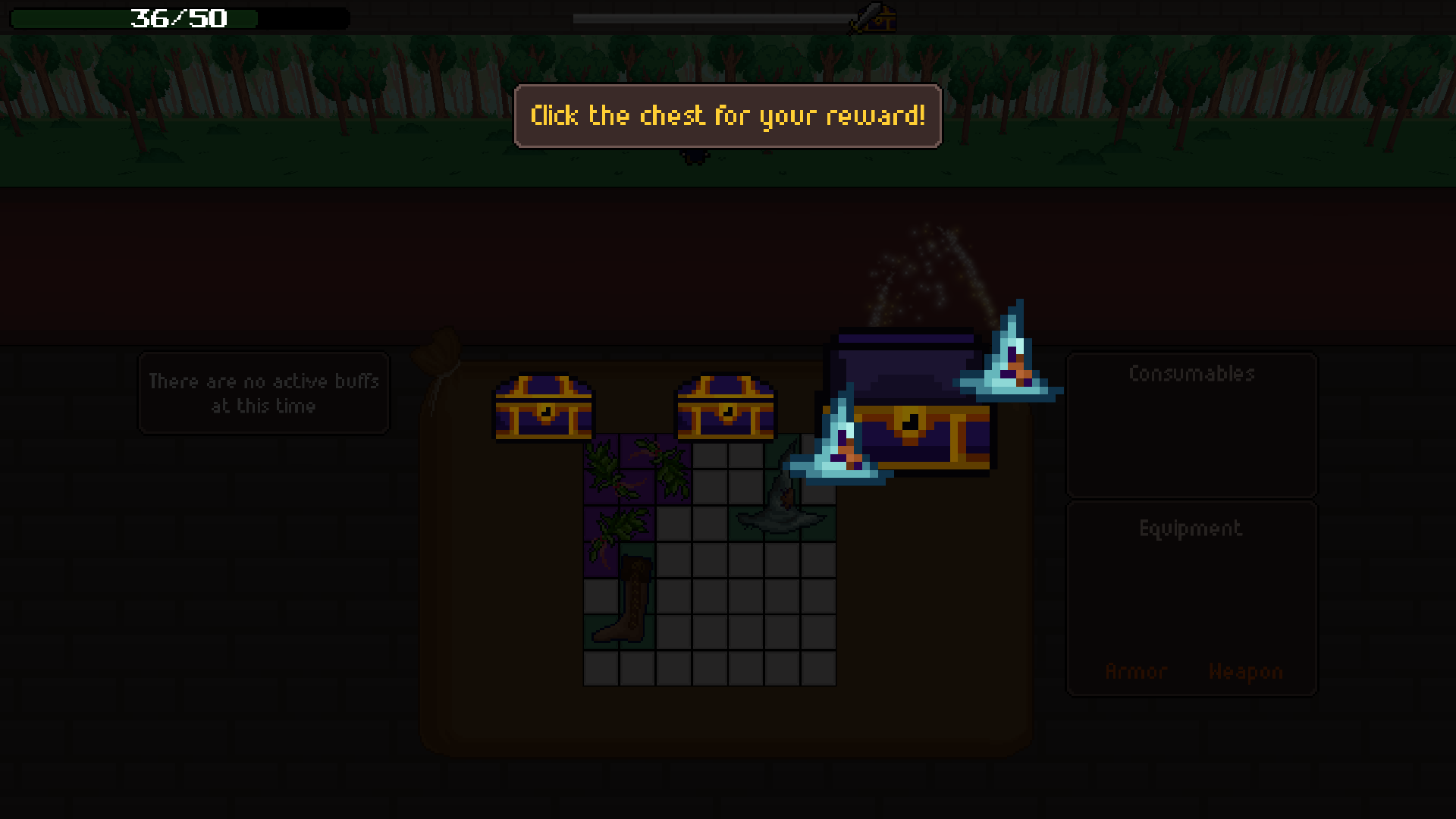 Is… Is this why I was doing it? Is this proper reward for my hard work? I literally can’t tell if I’m being ripped off or not!

My final reward tally is: 3 Mage Hats (1 found, 2 gifted), 1 Plain Boots, and 3 Green Herbs. Would have been more, but a popup suggested I could feed one herb to Lil’ Jarenth and I followed that prompt without thinking.

Now I’ve unlocked a town! Back on a world map, a little house icon has popped up. I click on it, and am prompted to buy a plot of land for a hundred gold pieces. So, this is a game universe where a university education puts you in five-figure debt, but a plot of land and a shop are bought for a pittance. Good to know — I should look into moving there.

I give my shop an entirely non-ominous name… 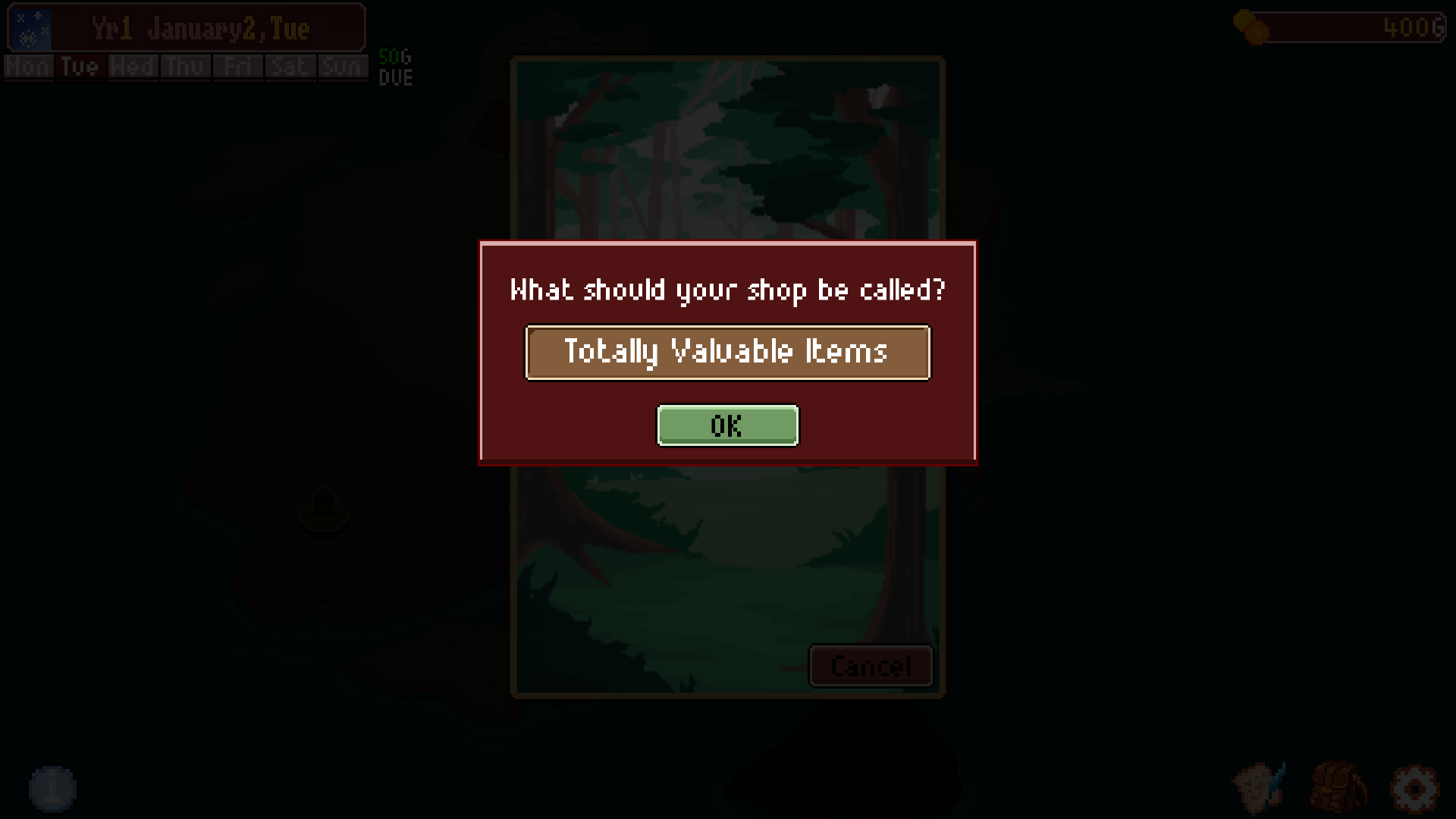 “Absolutely no bullshit items sold, or it’s your money ‘back’*!”

“Your first shop,” the game tells me, “how exciting!” Sure, exciting, let’s go with that word. That’s almost not inaccurate. Before I can even see the shop, I’m prompted to buy some tables. 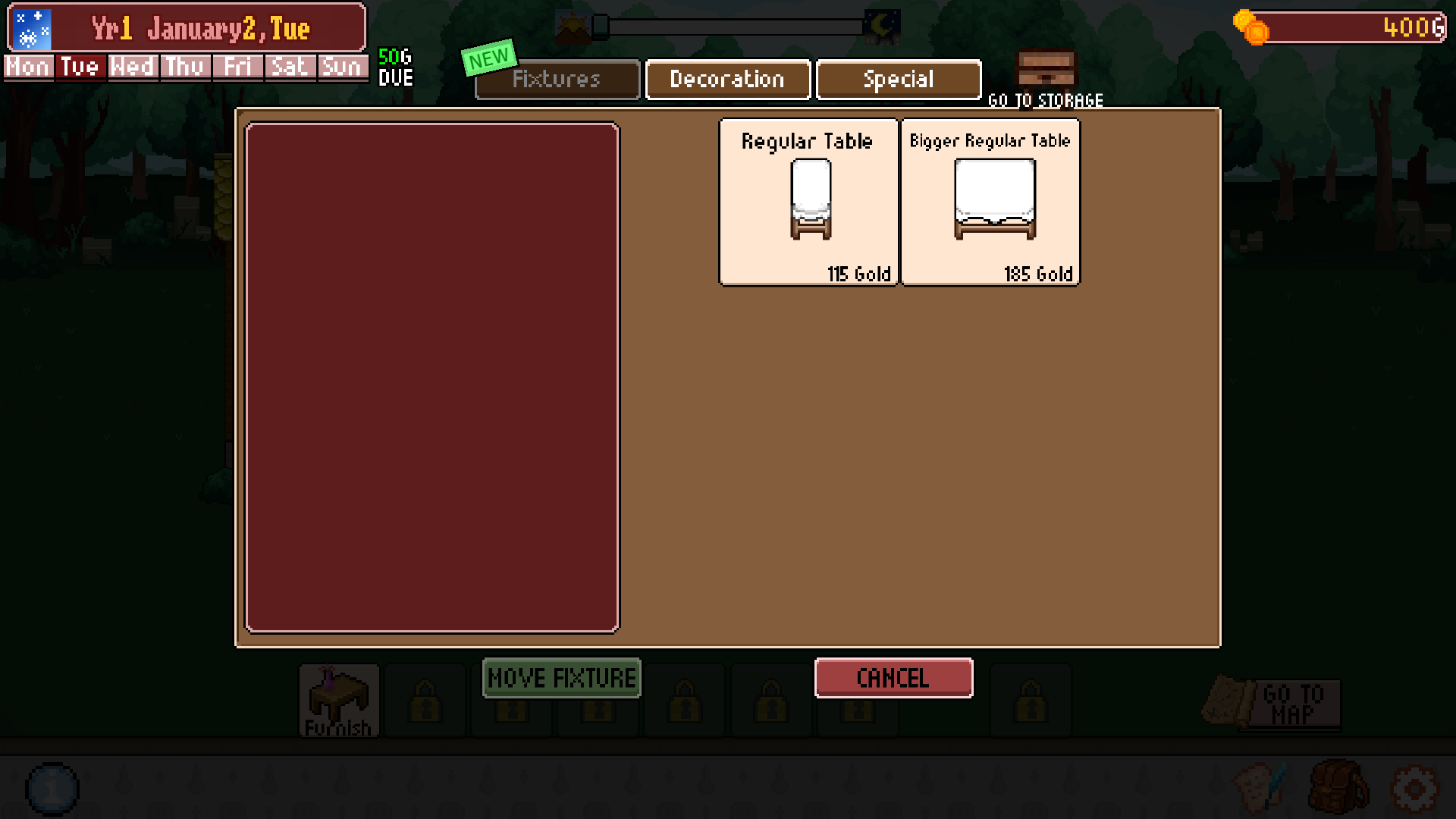 See, this is why I don’t like the ‘rollercoaster’ approach to tutorializing. What does this decision *mean*? Why am I being told to follow orders without context? TEACH ME THINGS

Then I get to place the table, and in the process, get a good look at the town and my store. 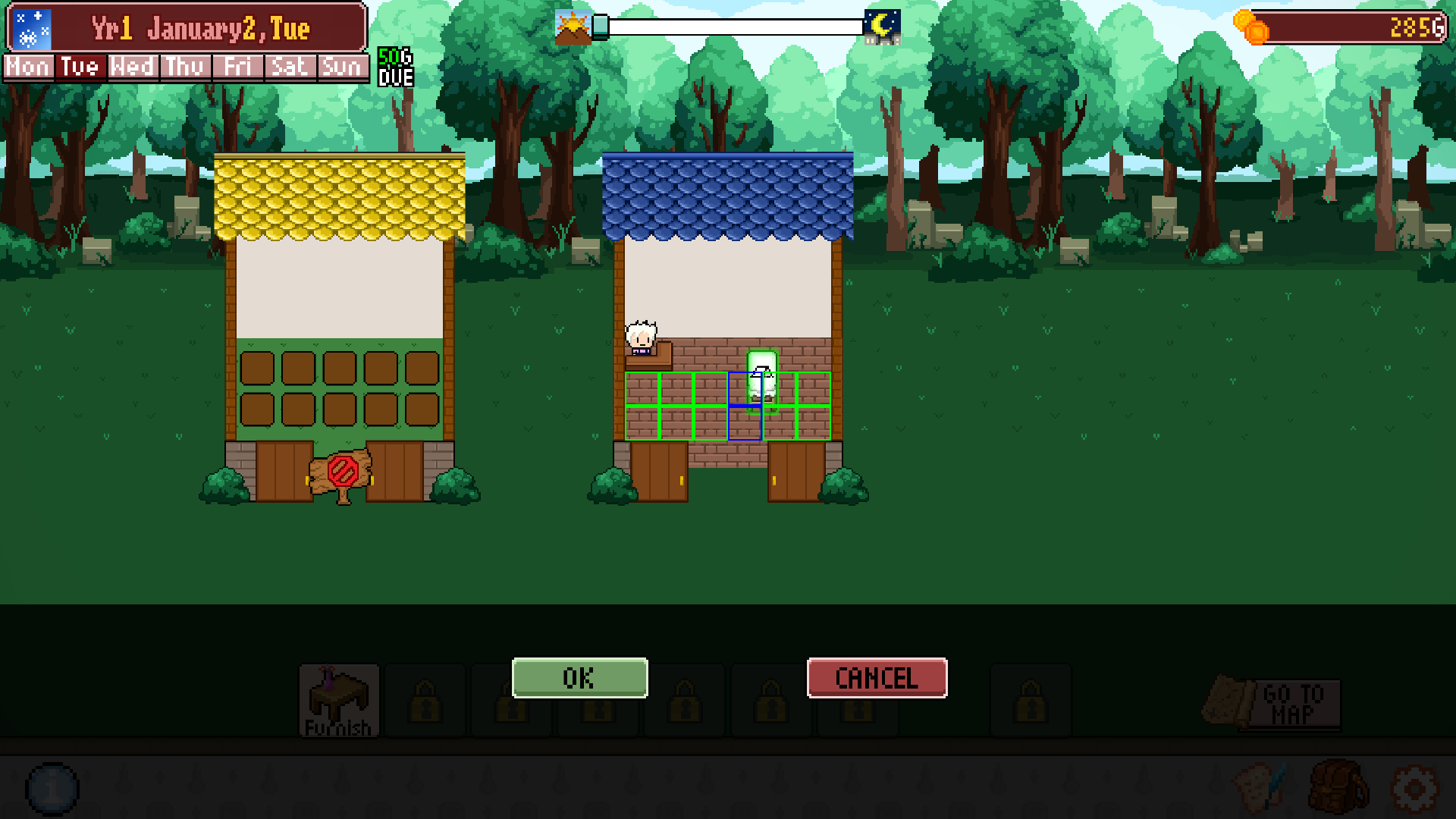 I’m… starting to see why I only paid a hundo for this.

Now I have a ‘fixture’ in my shop. Which means I can put items on it! The small table can hold one item, while the large table holds two. Would have loved that information earlier, but I’ve got enough cash to buy both. I even upgrade the large table, making it add a flat 1 gold to each item sold from it. I don’t know what that means either, in-fiction, but let’s just roll with it.

I put a hat, a boot, and an herb on the tables. I get the option to fiddle with the base price for each, though annoyingly the game keeps asking me if I want to apply the price percentage adjustment to every item after each adjustment. No idea who thought that was a good idea, but then maybe I’m just not seeing it. At any rate, before long I’m done designing my ‘store’. 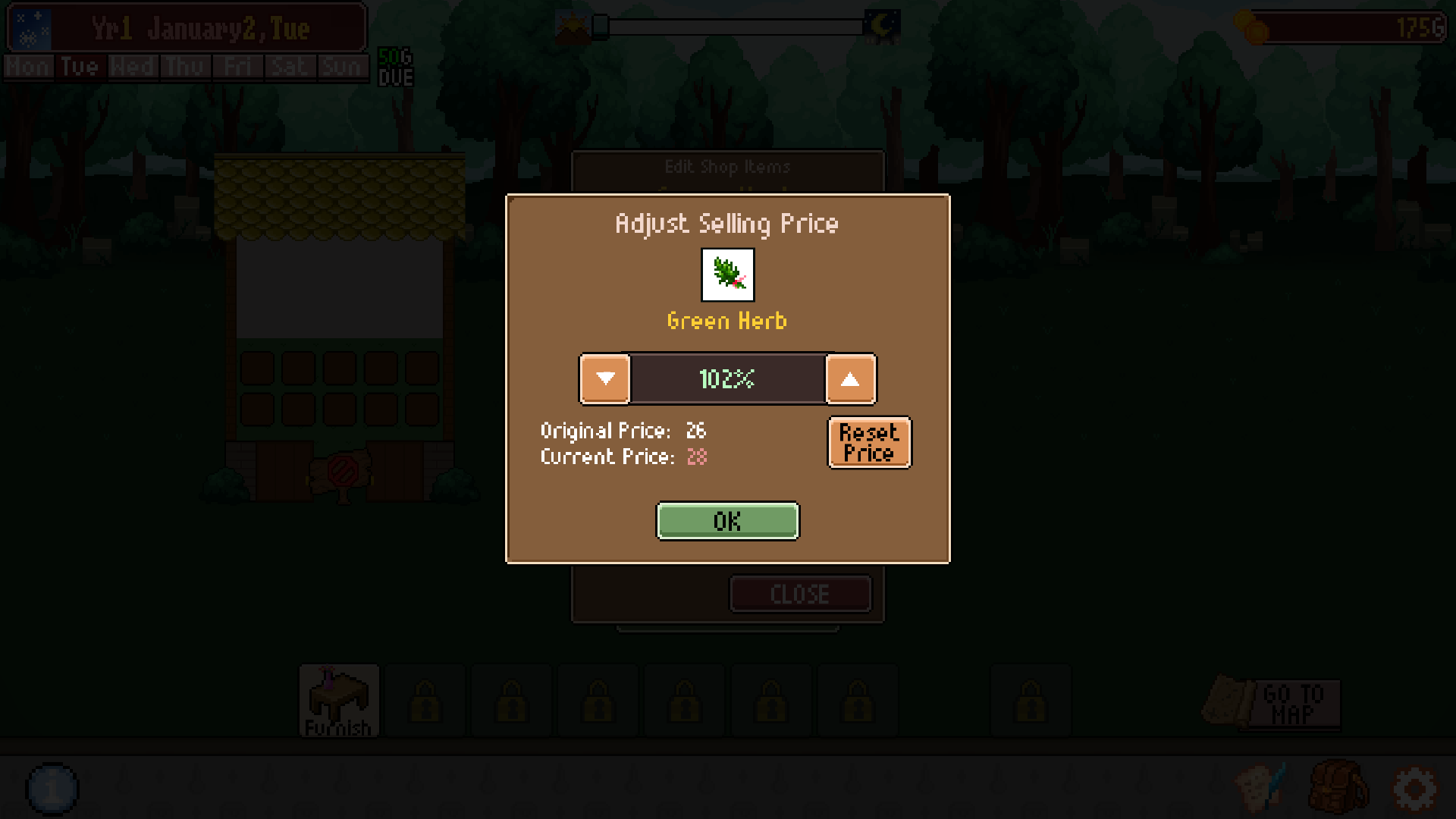 Manipulations like these take some *time* to get right, okay.

And then it’s time to open for the day, I guess! 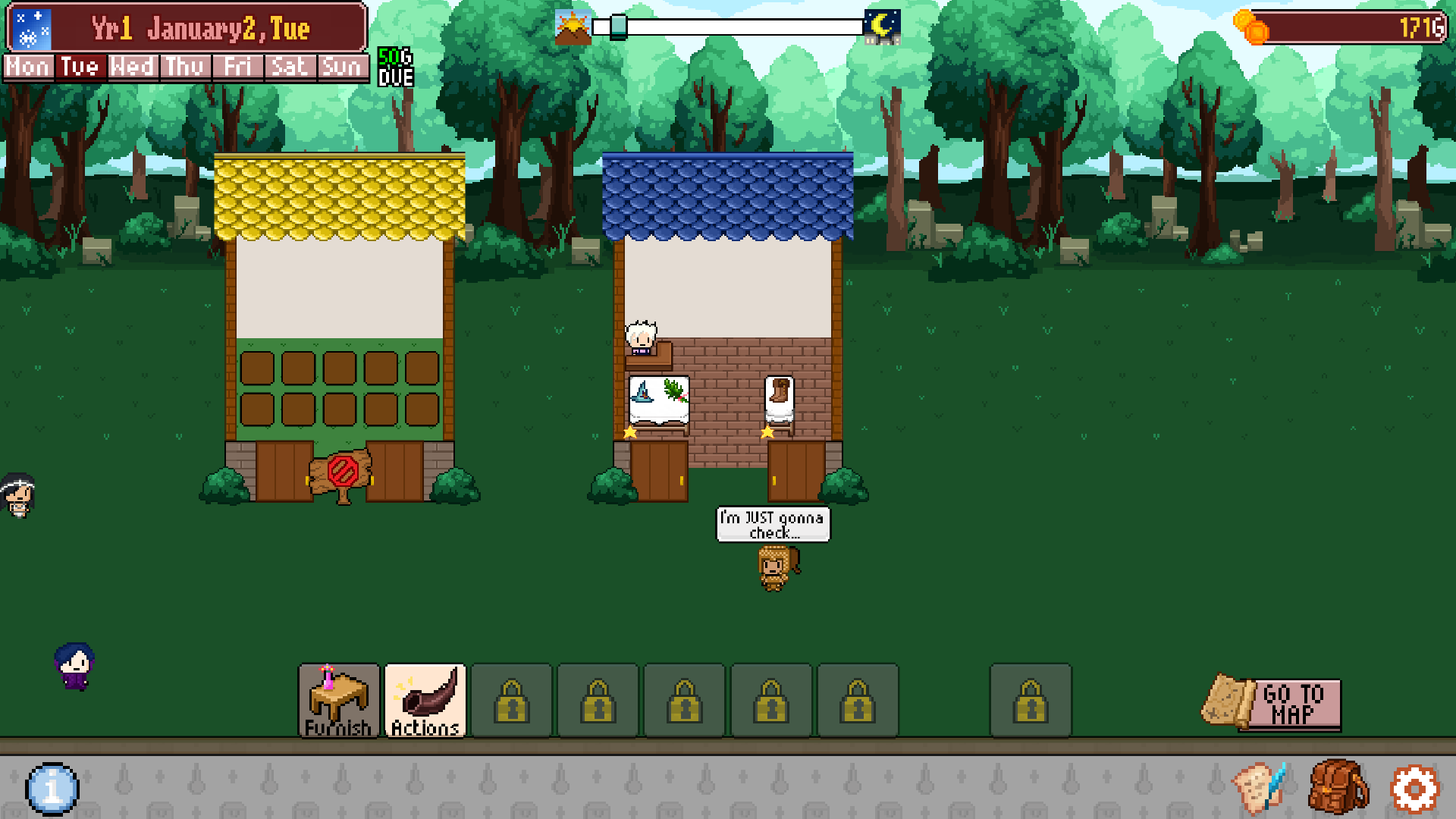 When I open the store, a time bar at the top of the screen starts ticking. From the left and right, various people start walking on-screen, going in straight horizontal lines that inevitably pass my store. Sometimes, one of those people stops, and mumbles to themself about my cool store, and ‘maybe checking some things out’. This seems to go one of two ways: Some people say something about the price being too high, or not having enough money, and resume their walk. I’ve lost them forever. Other people start visualizing the item they want in their mind. Then, after a few seconds, a similar item disappears from my shop, and money is added to my counter. 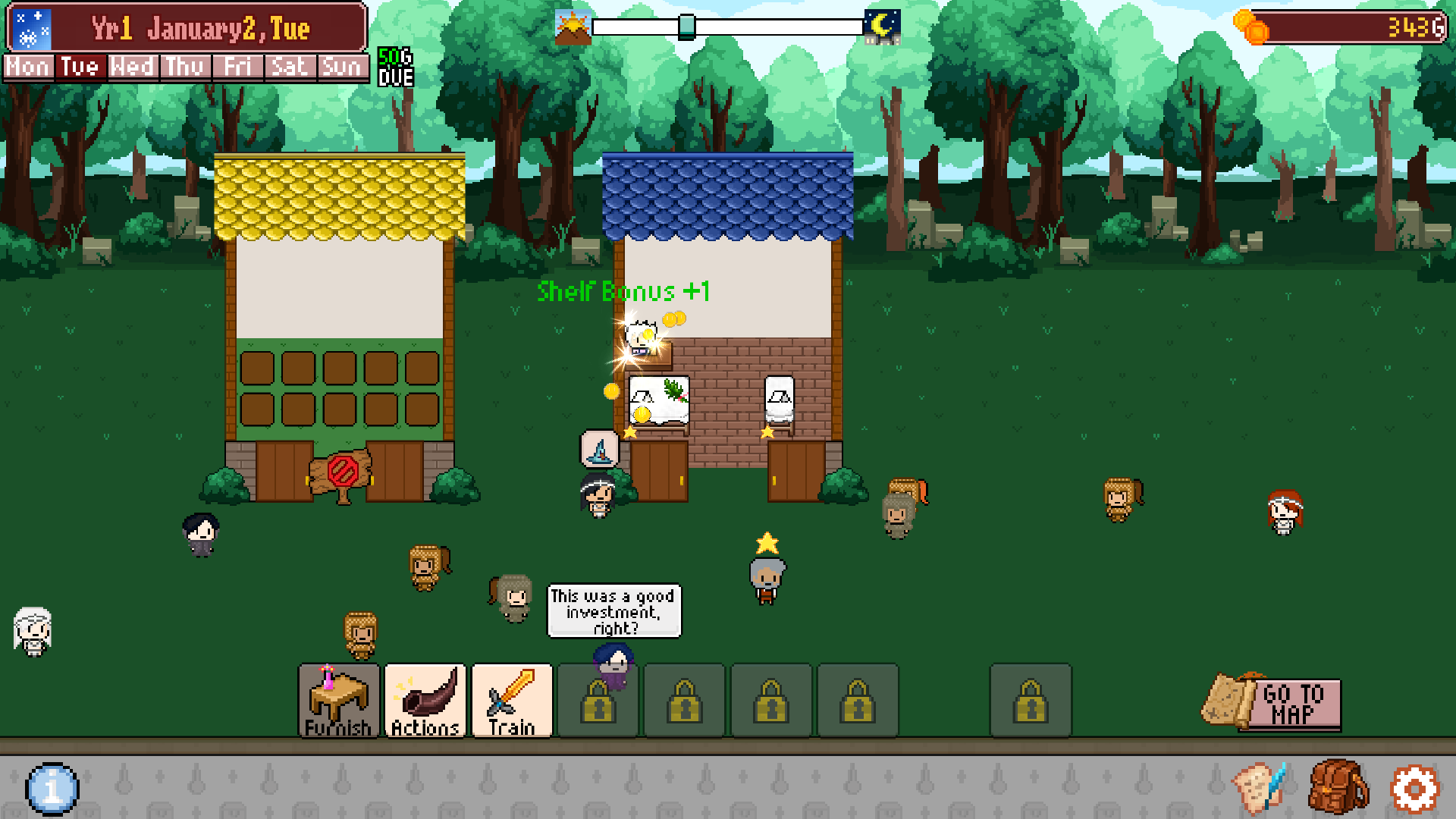 Pictured: One poor sap thinking about buying a hat, and another poor sap actually just buying the only hat I stalled. Sap #1 is about to find out that they snoozed, and as a result, they lost.

Before long, the nondescript grass field is lousy with people, and even with most of them passing my shop by, it doesn’t even take me a whole minute to shift all my merchandise. Without any input from me, I stress. I’ve had the option to use a magical power to ‘call customers’ to the shop, but that costs four gold pieces, and who has that kind of marketing budget? Instead, I’ve been entertaining myself by clicking on the walking people, which sometimes seems to trigger them to check out the store closer, and by clicking on the birds and tumbleweeds that make their way across the screen, which… rewards me with money? Like, pretty nice amounts of money, sometimes. 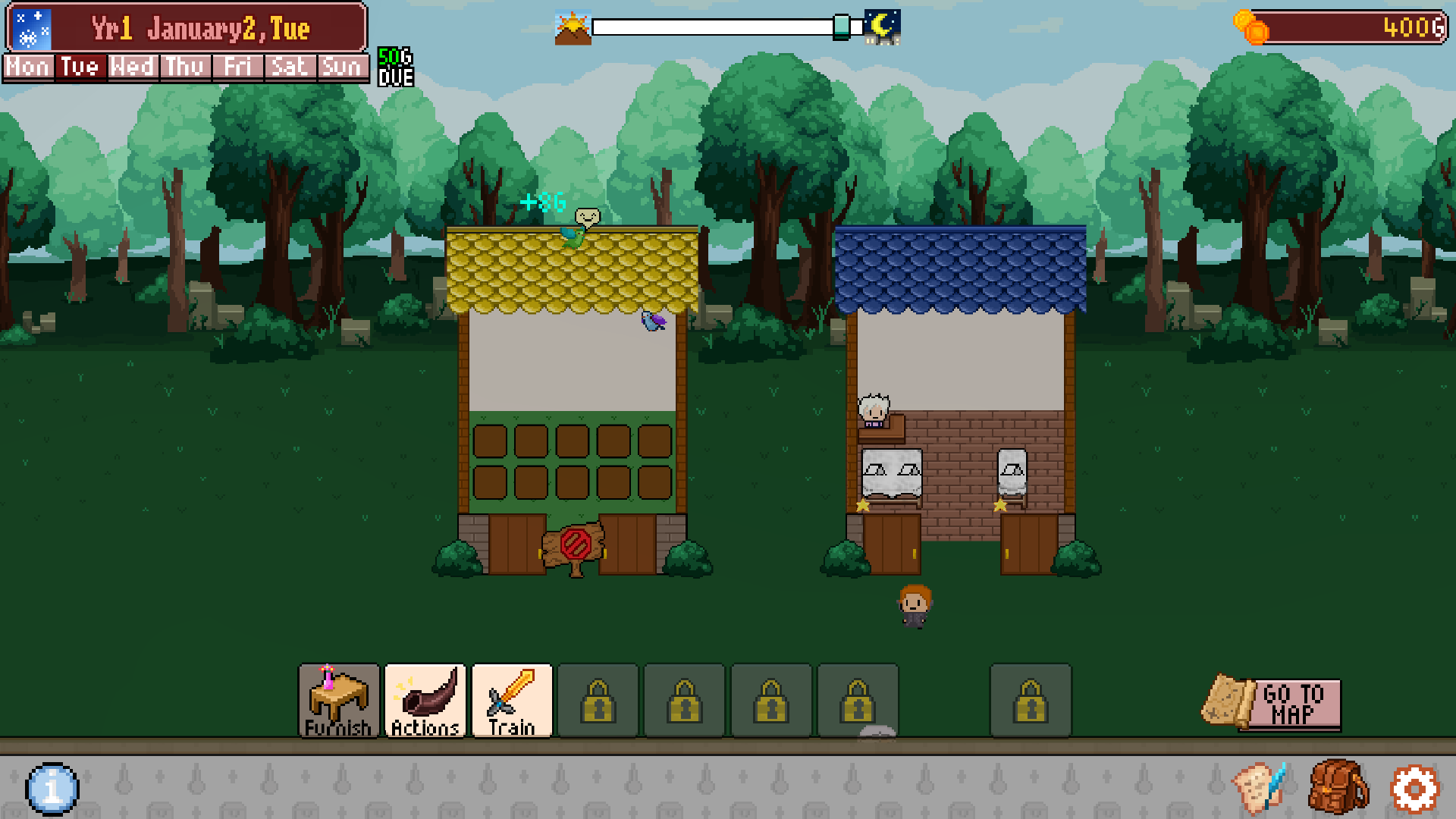 I swear I’m not kidding. I clicked the bird and money fell out.

But yeah, my shop is sold out pretty quickly. Day over, I guess! At the end-of-day screen I get an overview of my sales, my earnings, and the looming 50000 G deadline. I’m told that I can either start the next day, which means running another shop day with my current inventory, or I can return to the world map and run more dungeons. There’s only the one right now, but Pixel Shopkeeper promises that more dungeons might show up later. In fact, it’s so sure about this, it preemptively suggests I should look into training up myself to be able to deal with them. Which costs a lot of money, sure, but who doesn’t want to have nonzero stats? 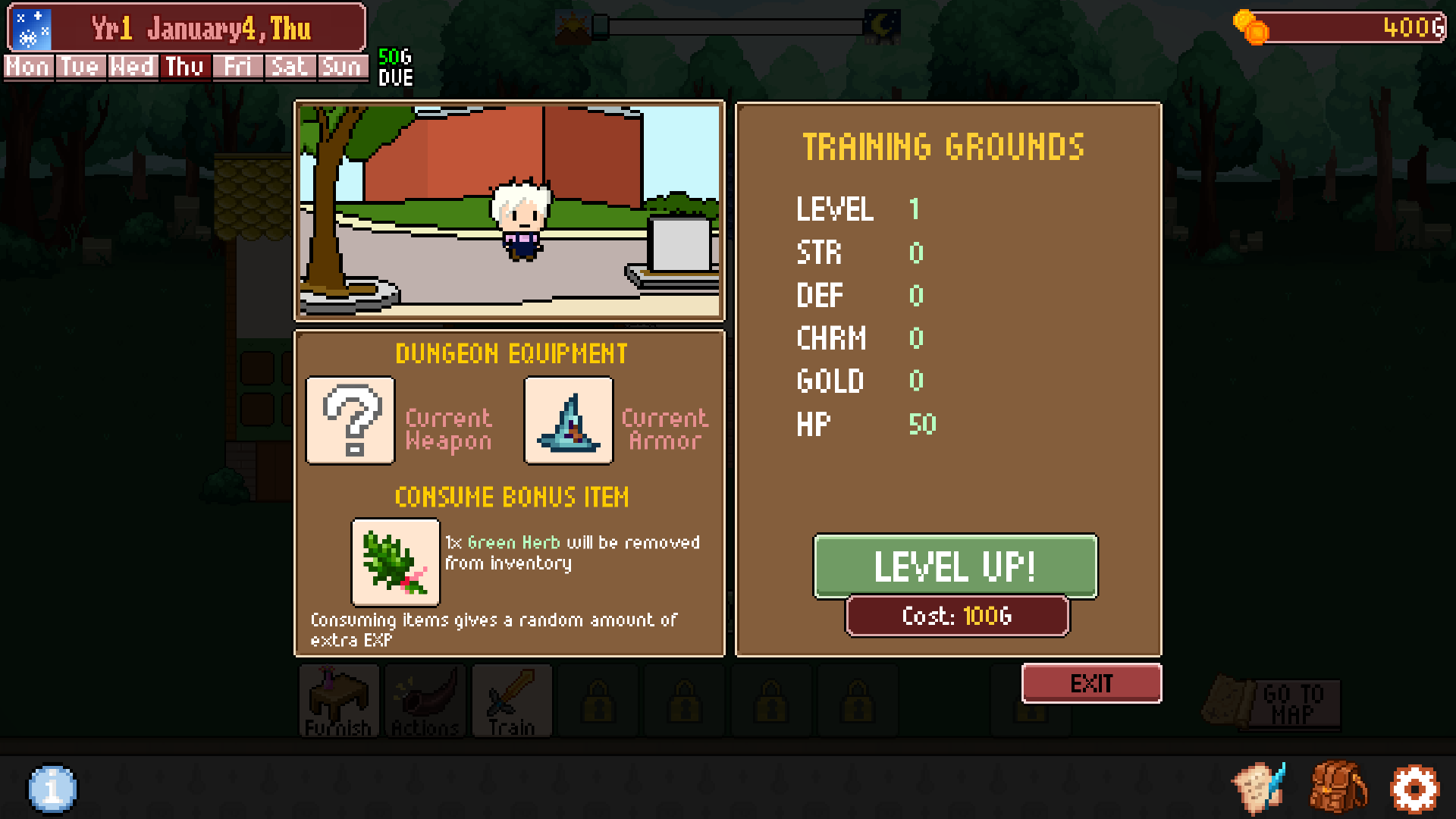 I’m literally paying to be able to win.

But then again, who even needs stats when I can reliably rock the only dungeon? 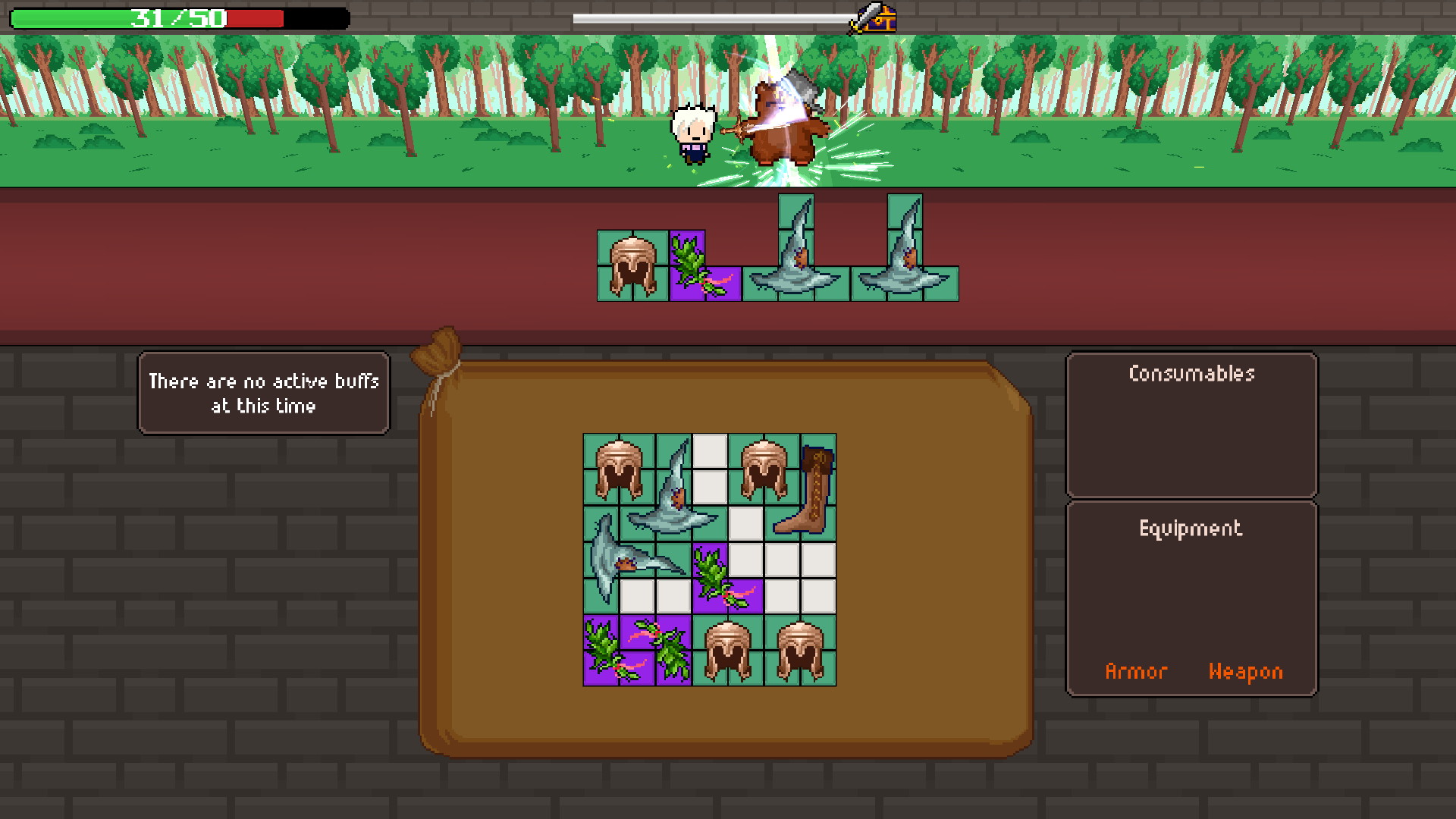 Yeah, I got better.

Now, I know what you’re thinking: If my loan is 50000 G, and this week I’m supposed to pay off only 50 G, even without interest that puts me in debt for a little under twenty years. But to that I counter, so what? It’s a living. Tell me, what sounds more appealing: Eking out a lower middle class existence peddling shoes and hats I stole from sentient eggs? Or risking my life in increasingly dangerous dungeons, chasing the high of pricier and shinier loot to fulfill an endlessly escalating demand for financial compensation? 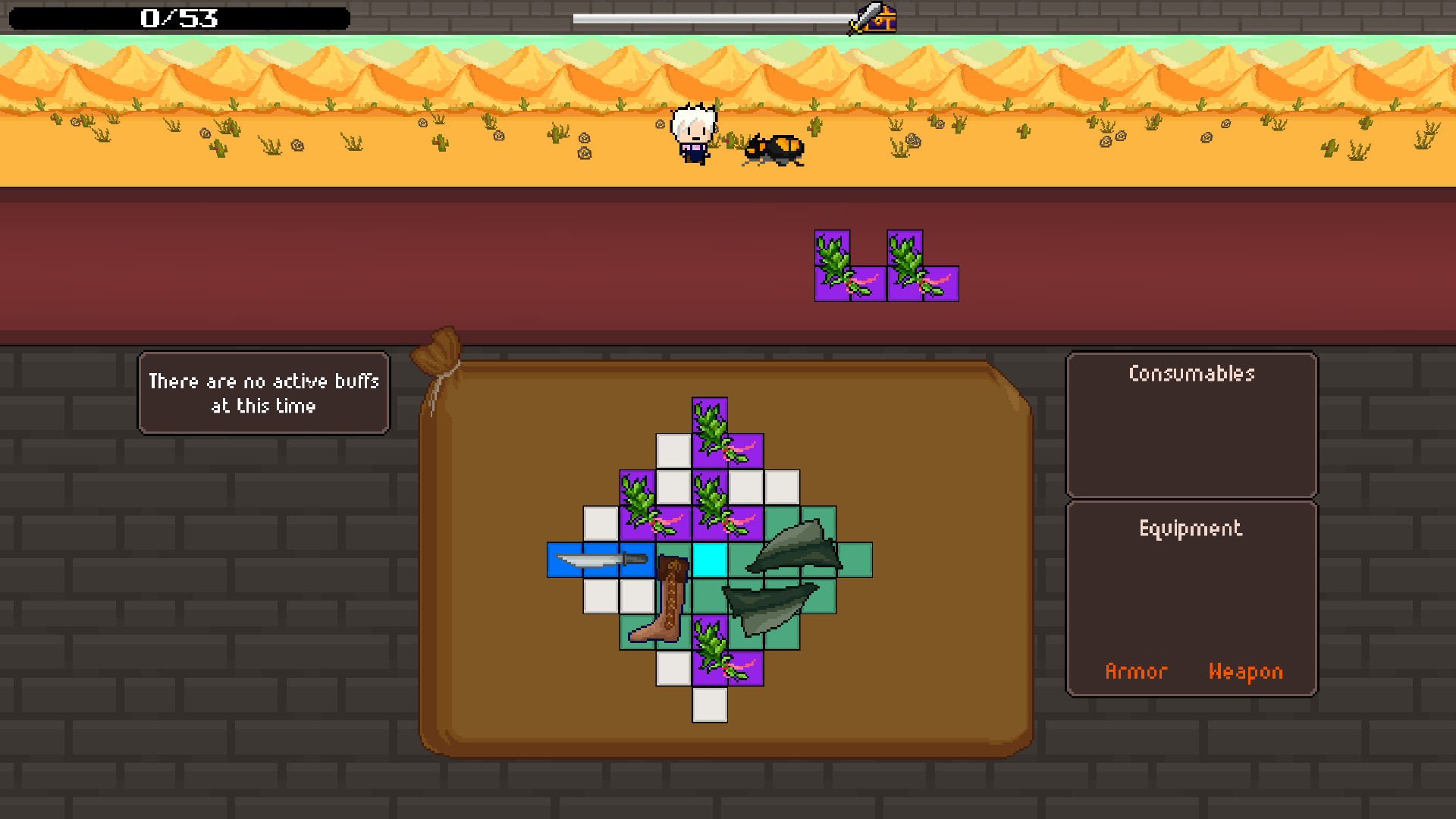 …Yeah, that didn’t convince me, either. Let’s go see what lies behind this next sand dune.