We interrupt this regularly scheduled treatise on the games on my to-play list to bring you a sudden and unexpected look at Illuminated Games‘ Golem Creation Kit, a game that I just sort of spotted on the Steam front page one day. The preview materials show all the aesthetic and graphical appeal of a Flash-based hidden object game, and I’m 90% sure the title is primarily a play on Fallout‘s GECK. I wouldn’t be able to tell you what made me look at this game and immediately decide ‘yes, this is what I want to review next week’.

But all the same, that’s totally what happened.

(Game source: Impulse-bought it myself.)

All my apprehension about impulse-buying and review-locking myself to a completely unfamiliar game vanishes into thin air when I first see Golem Creation Kit‘s title screen. 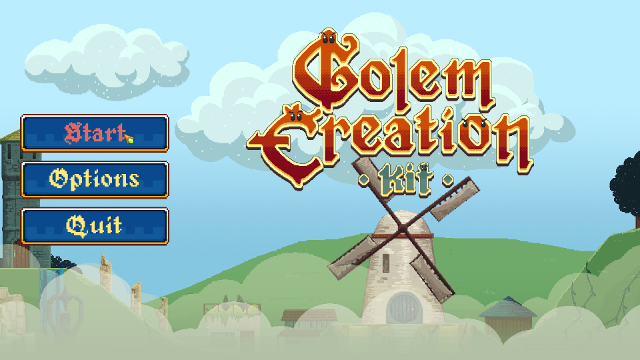 Look at it. LOOK AT IT. The letters have angry eyes!

I love this art style. I don’t know if I saw anything like this in the preview material, so it’s not completely unlikely I’ll end up disappointed. But look at how bright and colourful it is! The upbeat music adds to the warm and inviting atmosphere, for a particularly strong on-boarding experience. They say not to judge books by their cover, but with covers as nicely-designed as this one, it’s hard not to.

Also, like the metaphorical book I just brought up, Golem Creation Kit doesn’t present a lot of user options, beyond ‘how fast do you want to read the text’ and ‘how loud do you want your sound to be’. 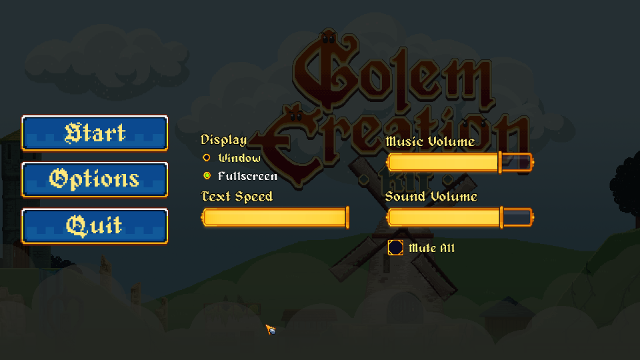 Anyone who thinks book-reading can’t be a very *loud* endeavor is reading books wrong.

I start a new game, select a profile, and name it ‘Jarenth’. And then it’s time to create some golems!

After some brief exposition. 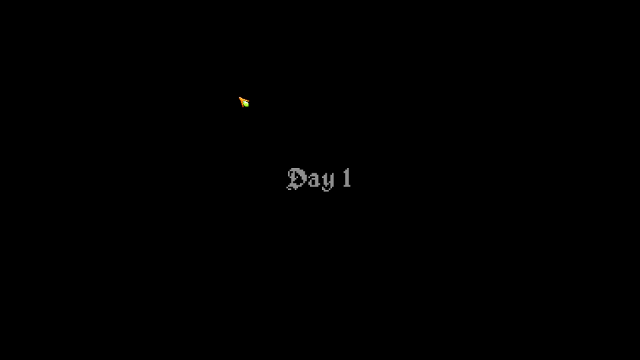 DAWN OF THE FIRST DAY

“It’s a balmy spring day in the Aurim valley. The birds are swaying, the trees are singing. And in the tower of the Mighty Wizard Euphastius Herodotus Bonz, apprentice magician Fil…” 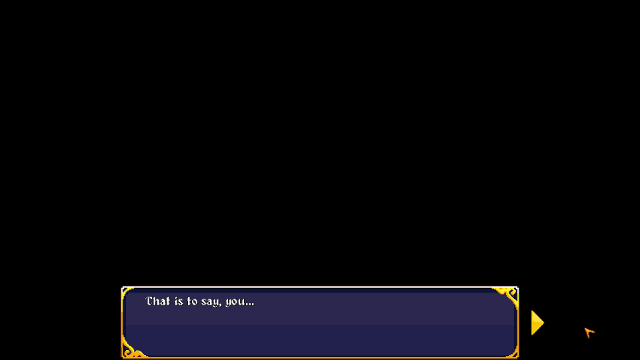 I appreciate this clarity.

“…are studying diligently, with the faithful aid of Bonz’s raven familiar, Qork.” 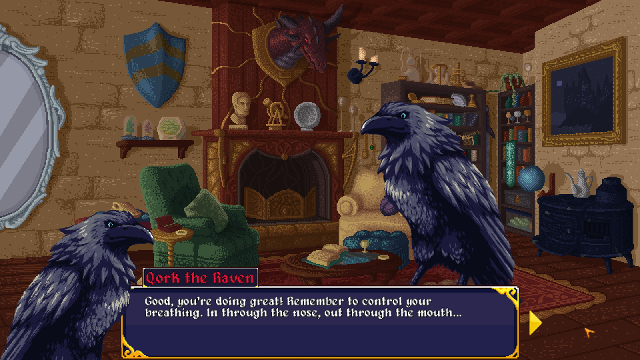 As depicted here, all of a sudden.

And just like that, the world pops into existence and view. The high-resolution, muted-colour pixel art I’m looking at appears to show some sort of den: There are comfy chairs, a fireplace, a tea kettle, and what appears to be the severed head of a slain dragon. Harmonica music whistles into being as I start reading the story of Fil, wizard apprentice, and Qork, wizard familiar and all-around bird. The latter is instructing the former on doing something breathing-related: The ins and outs, no doubt, of some advanced form of breath-based sorcery. 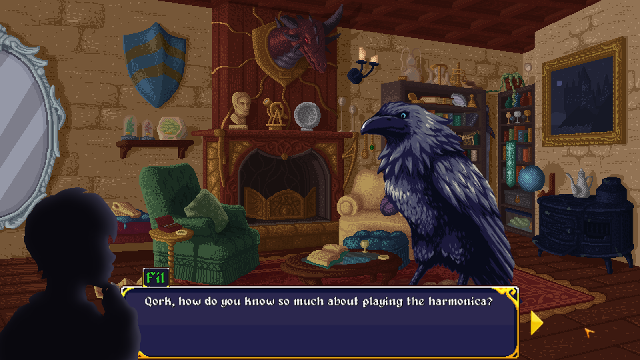 Ah, I see. There’s a group of people standing right outside the wizard tower. And from the torches, pitchforks, and generally angry shouts, I can’t help but deduce that this is an Angry Mob. 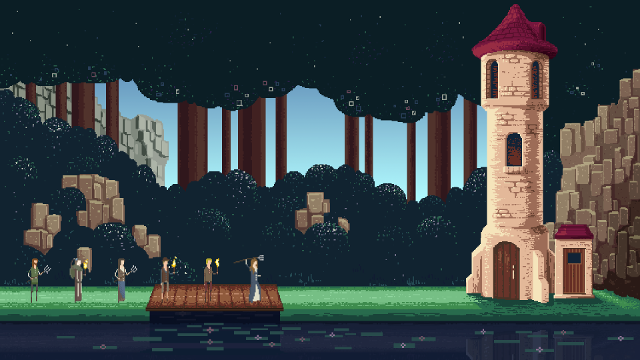 Angry at the fact that the tower is much more lovingly coloured and shaded than their models, obviously.

Fil is upset. Qork is more laissez-faire about the whole thing; apparently this sort of uprising comes with the territory of being a renowned mage. Master Bonz would be able to scare ’em off easily, but then Master Bonz is currently on vacation, apparently having left operations of his wizard tower to a child and a bird. Neither of which are much looking forward to being witch-hunted. 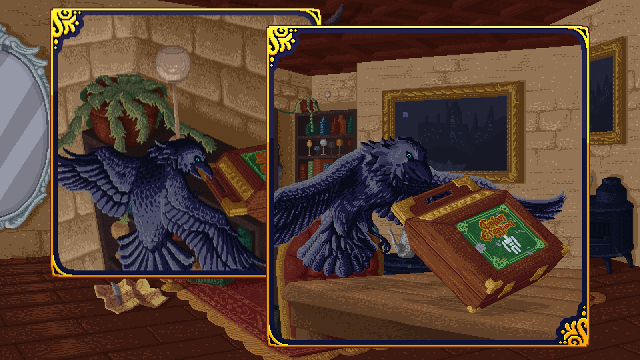 Hey, the game’s namesake! Finally, I was getting tired of *not* having golems to make.

Before I know it, the Kit fills the screen. It’s lovingly crafted, weathered but imposing in its luxury. It’s large, and immediate, and the only thing I can interact with. It promises a day, nay, a lifetime of exciting golem-creation and all the mysteries that brings.

I can’t figure out how to work it. 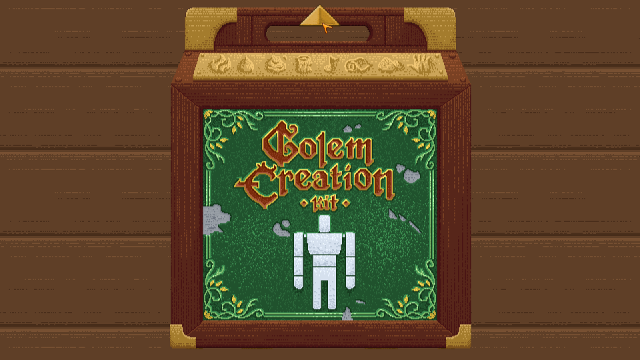 And the game won’t tell me.

It takes me a good five minutes of clicking, dragging, and cursing before I suss out that I’m supposed to click-and-drag open the box lid, top to bottom. Once I figure that out, though, everything else quickly slides into place. Literally, because the GoCK contains a ton of elements I have to drag around the board. 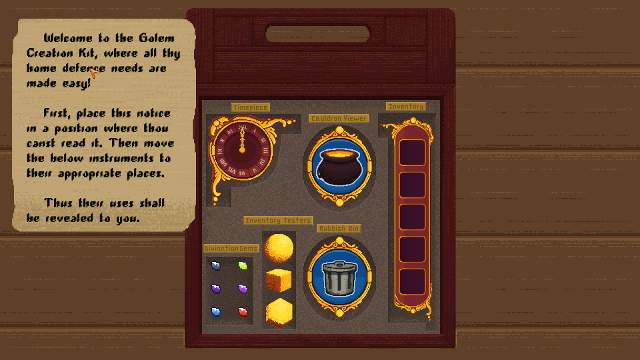 I don’t see how any of this is related to golem-creating, but then again, what do I know?

First is a letter, which tells me to put it somewhere within view, and then magically updates to keep me informed. Second is a timepiece, which I drag to the upper left, where it snaps into place. Third is a picture of a cauldron, which goes to the lower left. Fourth is an ‘inventory’ bar, which expands as I snap it to the right…

I’m assembling my own UI here, aren’t I. 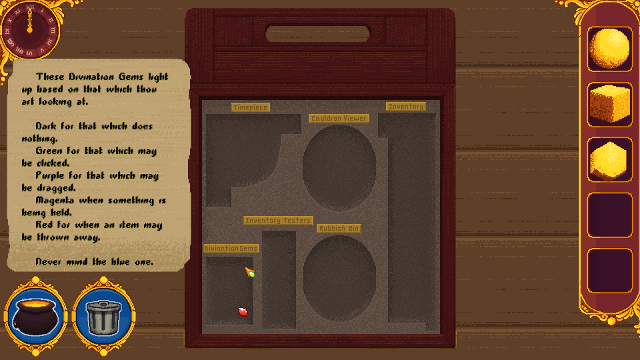 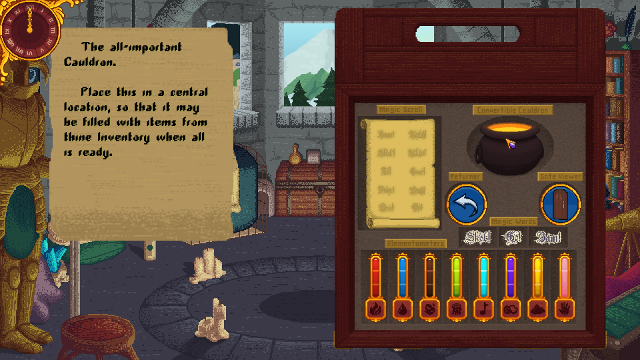 Is this the game?

Okay, okay: Complaining aside, this is actually a clever way of introducing UI elements, as the magic letter explains everything while I click and drag it. This is my cauldron, where golems will be made. This is my spellbook with magic words. These are three of the words, with more coming later. These eight meters indicate the contents of the cauldron, which is important for shaping specific golems. This is my inventory, where ingredients are kept.

I learn how to add ingredients to my cauldron, which fills up the various meters. There are eight, corresponding to: Wood, Rock, Sand, Water, Fire, Cloth, Flesh, and… Sound? I wanna see what a Sound Golem looks like. And I learn about my magic word, one of which is supposed to activate the mixture and spawn a golem. Again, not a great deal of context for what this means. I understand that in order to make a golem at all, I’ll have to get enough ‘ingredients’ to fill between one and two bars up to at least their second markers. Less than one means no golem, and apparently, more than two means no golem either. I don’t know why the bars have three markers if two suffices, but then I’m not the grand wizard. I also don’t know where the ‘ingredients’ are supposed to come from, unless this whole game is going to be about matching basic untextured geometric shapes. And last but not least, I don’t understand why I’m not allowed to use the windows yet! There are three windows, one to a town and one to a mountain and one to a sea, and when I mouse over them all the game says is “Gather ingredients from this Place (Not Yet!)”.

And then I finish the tutorial and start the game proper, and some things very quickly snap into place. No pun intended this time, actually. 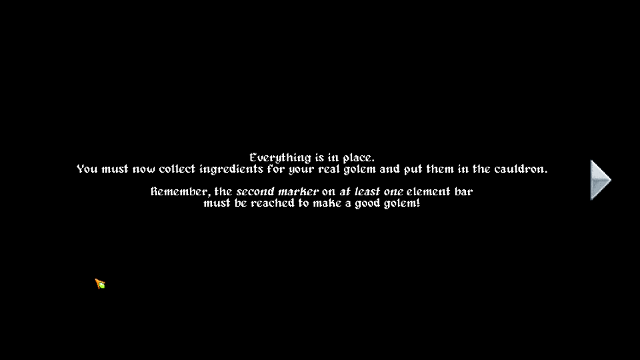 It turns out that in ‘real’ play, I can actually visit the three locations shown in the windows. This takes the form of a 2D/somewhat-isometric side view of the place, that I can zoom in and out on and click and drag my way around. I start in the village, a quaint medieval selection of stone and wood houses with a windmill, a market, some horses, and a river.

What happens instead is that I drag the front of the house clear off. 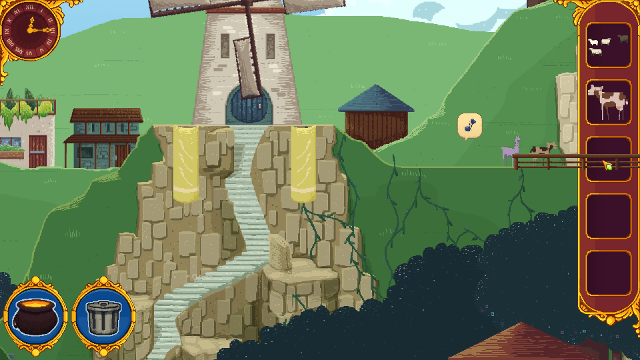 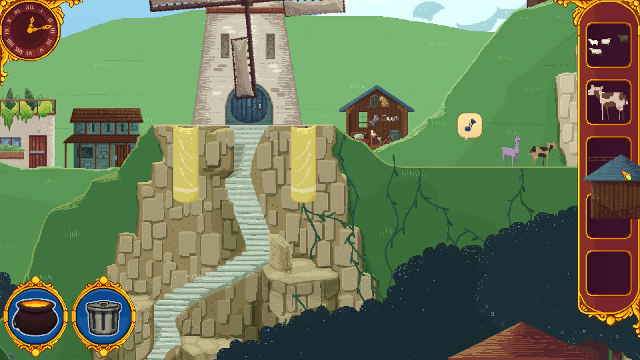 Well. That’s… That’s definitely interesting. I thought I was playing some sort of wizard apprentice, not Doodle God. But you know what they say about gift horses. That’s right: You pick up a bunch of those too, and stash ’em in your inventory, right next to the house facade! And a cow, too. And the fence that was holding them in. And the whole back of the house, just to keep the set complete. And…

Oh, my inventory is full now. Clicking the cauldron button in the lower left — hey, I put that there myself! — I’m zapped back to the lab, where I dispassionately drop fences and animals and entire houses into the magma-like mixture. Several of the meters rise, but not high enough. So, I’ll need more ingredients. How about… the Sea area? What ingredients does that have for me? Rocks, and crabs, and buried treasure chests, and maybe the eternal waters of the ocean itself? 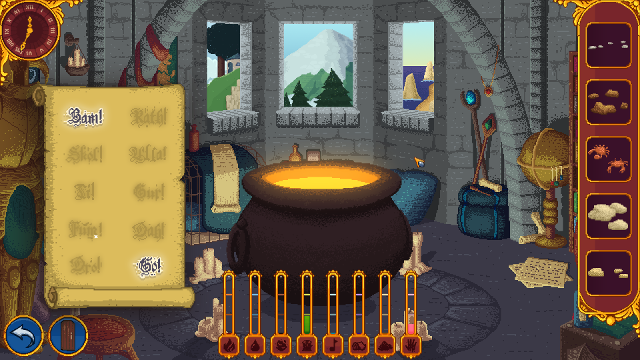 I mean, I’m keeping it light right now. But I totally see myself go mad with power over this later down the line.

I’m so preoccupied with grabbing everything just to see if I can, that I totally forget to pay attention to the upper-left timepiece. The game has told me that I only have limited time to assemble a golem. But this only comes back into focus when the soft background ticking becomes louder and more insistent, and I notice I only have seconds to spare. And I don’t know if I have enough golem juice yet! I’m supposed to do something here, but what do I do, what do I…

The clock runs out, and so does the patience of the mob, outside. With no golem to oppose them they storm the tower, kicking down the door and doing something that causes smoke to billow out. 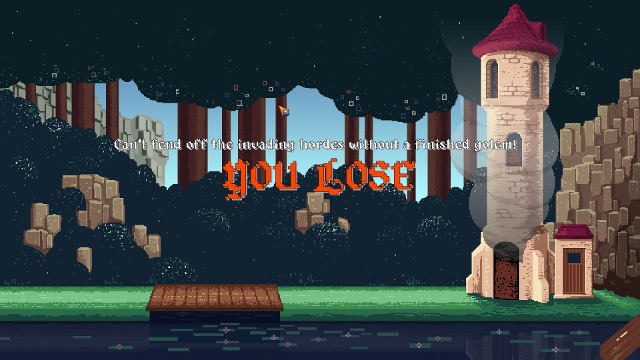 They all convinced Fil to stop being a wizard and start a new career as expert barbecue chef.

Alright. Let’s try that again. No, I don’t want to replay the tutorial; thanks for asking, though.

This time, I move with focus. The mountain area, which I hadn’t seen yet, is practically an overgrown forest, so I rip up entire groves, several ancient trees, and toss them in the pot, one after the other. The bar rises steadily, and once it’s decently full, I cast the magic word that doubles my strongest element (at the expense of all others). That pushes the bar well beyond the two-point mark, and with only a limited sense of vengeance I cast the GO word. 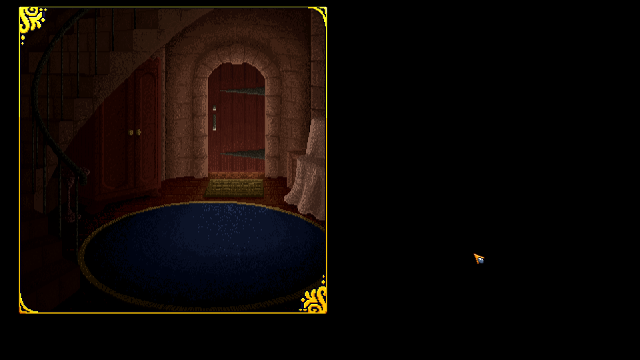 The view switches again, to the tower side perspective and the mob. This time, before they can move, the door flies off its hinges. And out walks a seven foot monstrosity of wood, moss, and baleful animated humanity. It takes five steps outside and then roars at the mob, and they all drop their weapons and torches and run off screaming. 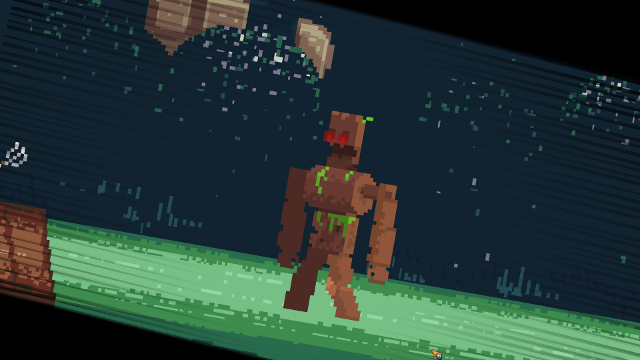 In the tower, Fil and Qork celebrate. Briefly. Fil is happy that they’re an actual wizard now! They made a golem and everything. Qork is a little more reserved: “They’ll be back,” he glooms, “angry mobs never let it go at just once.”

So… I guess this is the game? I mean, obviously more than just this. At the start of the level I had a brief moment to mouse over the attacking villagers: All of them were marked as ‘Immunities: None’. But it seems obvious that maybe later villagers will be immune to… certain golems? Certain spells? Certain types of attack? And with eight elements, and therefore at least eight different golems… Yeah, I can see this shake out as sort of a strange puzzle game. Find the right elements, make the right golem, avoid getting burned to death day after day. Or at least until master Bonz comes back in four days. That’s definitely what’ll happen, right. 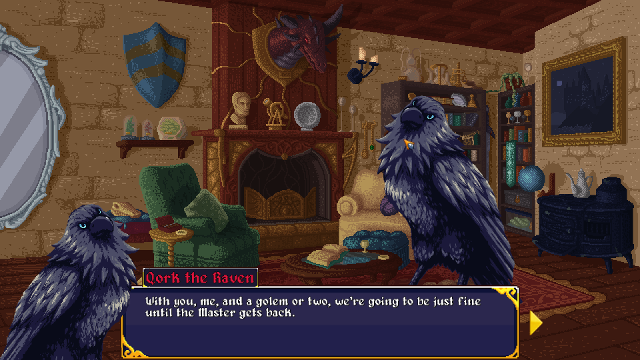 Unrelated, but: I love how Qork’s talking-head near the text is just his entire character sprite, down to the exact impressions.

Let’s see how on the money this assessment is. See you in a few golems!