One particularly neat aspect of running a small video games website and indie game review column essentially as a hobby is that I get a lot of opportunities to chase down and play that catch my eye for silly reasons (and then write them off as Patreon business expenses). This was the case with Little Cat Feet‘s OneShot, where I was drawn in the esoteric-sounding Steam blurb:

OneShot is a surreal top down Puzzle/Adventure game with unique gameplay capabilities. You are to guide a child through a mysterious world on a mission to restore its long-dead sun. The world knows you exist.

And just like that, onto my list of To-Play Text Files it went. Including, just maybe, a little *sneak peek* for the coming weeks?

Conversely, one aspect that people rarely tell you about is when you sit down with a game, pour two or three hours into it, and only then realize, quietly, “I can’t actually review this game“.

I mean, obviously I can write about OneShot. I’m doing so right now, as evidenced by the fact that you’re reading this. But… Regular readers will know I have a reviewing style that could be described as ‘exhaustive’. I’m a scientist by trade, after all, and what do scientists do when faced with something new and unknown? We dissect. We prod and poke and take things apart as far as possible, then describe the individual pieces, as a process of building up to describing the larger whole. Yes, even in the social sciences. Especially in the social sciences.

Some games can withstand this sort of clinical analysis with their gameplay experience intact. Other games can’t. OneShot is such a game. It’s a really interesting game, and I really want to talk about it in more detail. But if I just tell you all the cool things that happen, there’s a good chance that will come at cost of spoiling those cool things for you.

Hence, a Shortieland. I’m still gonna talk about OneShot, because like I said, it’s really interesting. I’ll just… try my best to hint at the specific things that make it cool. So if you’ve ever wanted to see me very obviously dance around an issue for a little under two thousand words, you’re in luck, I guess.

(Spoiler levels: Narrative, as low as I can get it. Mechanical, as limited as I know how to convey.)

OneShot is aware that you exist.

The thing about OneShot is that it starts off slow. Very slow. For the first thirty minutes or so, give or take a few depending on your puzzle speed, it is basically nothing more and nothing less than an RPG Maker-style puzzle adventure game. Controlling a cat-eared child called Niko you walk around a dark house, interacting with objects, finding doodads and rubbing them against each other and the environment to make progress happen. There’s no real reason to suspect OneShot will be anything but that, save maybe that you read the blurb. 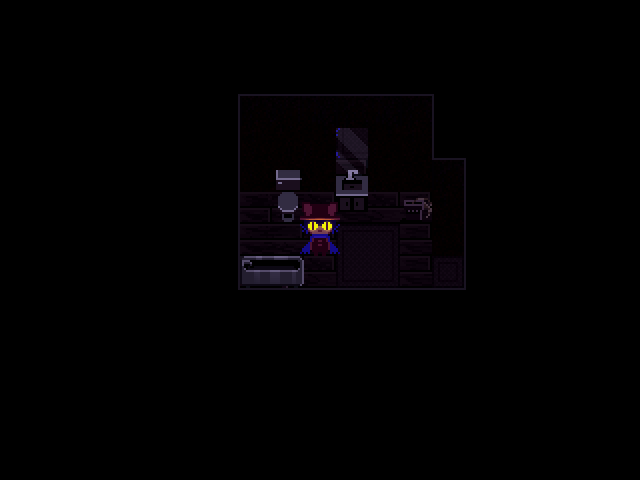 You AWAKE… to find yourself in a DARK ROOM.

Which is how it happened to me that, late at night on the longest most sweltering summer day of the year, I silently started at the screen in my underpants for nearly a minute, half heat-struck, half increasingly confused at a game that just addressed me with a name that by all rights it shouldn’t — couldn’t — have known to use. 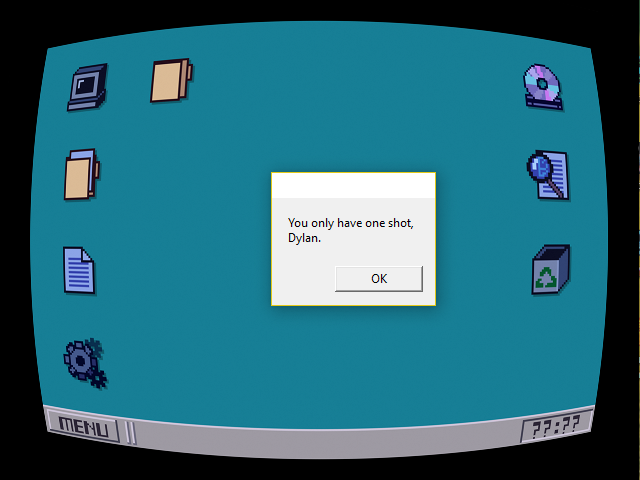 At no point did I enter this. It’s not my Steam name, either.

Things quickly get stranger from there, or maybe more experimental. This is the only such occurrence I’ll explicitly show in the review; don’t worry, there’s more than enough left.

The basic premise of OneShot is this: You, the player, are capital-G God in this digital world. Everyone knows you and everyone knows of you. But almost nobody ever directly interacts with you. In fact, for a God, you have a really limited window of interaction with the world. Which is represented, metaphorically but also very physically, by the OneShot game window. You can play OneShot in fullscreen mode, but the game all but insists you play it in a window: Partially to keep the game-window-as-window-into-the-world metaphor going, and partially for, well, other reasons.

There are only two characters you directly interact with. The first is Niko. 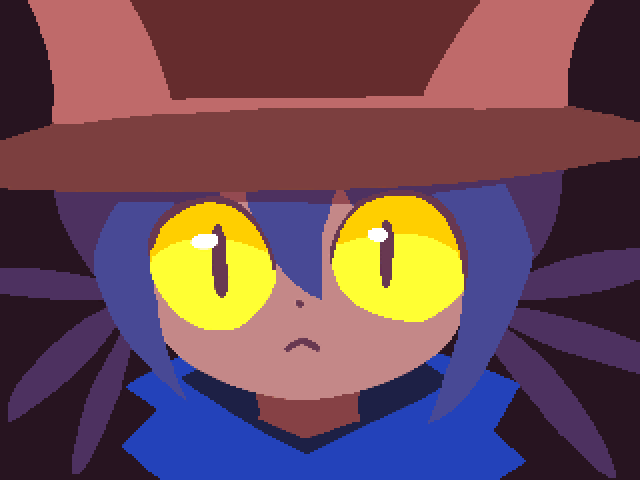 Say hi to Niko, everyone!

Like you, Niko isn’t a native to this world. They just… woke up here, one day, serendipitously coinciding with the first time you booted the game. Niko plays the very important role of being your Messiah, as well as the Prophesied Saviour Of The World. See, this world isn’t actually doing very hot. A long time ago, the sun disappeared from the sky, plunging the sky into darkness. The world has been surviving on residual heat and sunlight stored in phosphor, but that supply’s slowly running out. If nothing is done before the last light goes dark… Ah, but that’s where Niko comes in. Niko carries with them the world’s new Sun, which, yes, is a lightbulb. If they can bring that lightbulb to the top of the Tower at the center of the world, everything should be restored again. 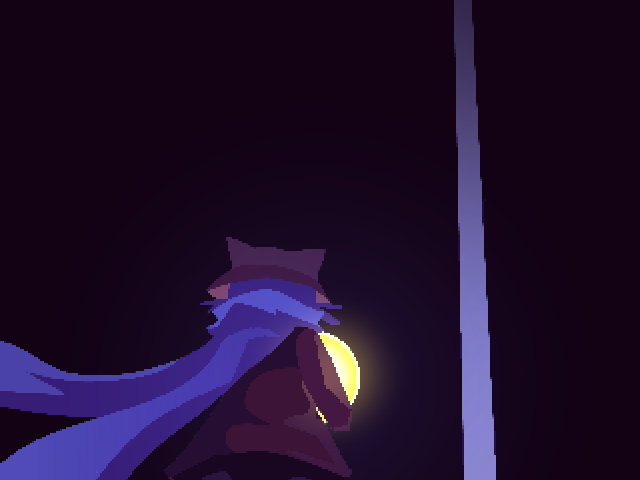 In practical terms, Niko is your player avatar in the world. You control them as they walk around the world, talk to other people, interact with the environment, and collect a small set of items. It’s not always clear how we’re supposed to conceptualize this, but it’s mostly presented in the form of one-sided dialogue: Niko ‘hears’ your commands, and replies in turn. There are a few segments where you do explicitly talk to Niko, but for the most part, I think that ‘you being at the reigns of the game’ is supposed to represent you ‘guiding’ Niko indirectly. 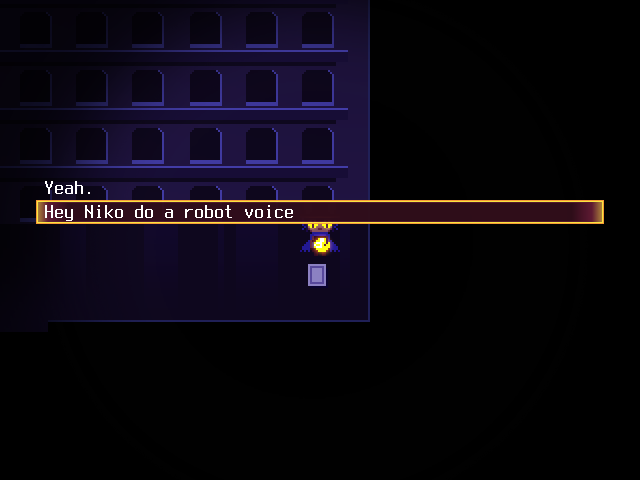 Like I said, something you can take a little bit more of a direct hand in that guidance.

Apart from Niko, the other character you interact with is a mysterious entity that I’m just gonna call The Entity, because I just got back from the gym and my spontaneous creativity for the day was washed away in resentment and sweat. If Niko represents the bridge between you-the-player and the game world, The Entity bridges the game world with your computer. 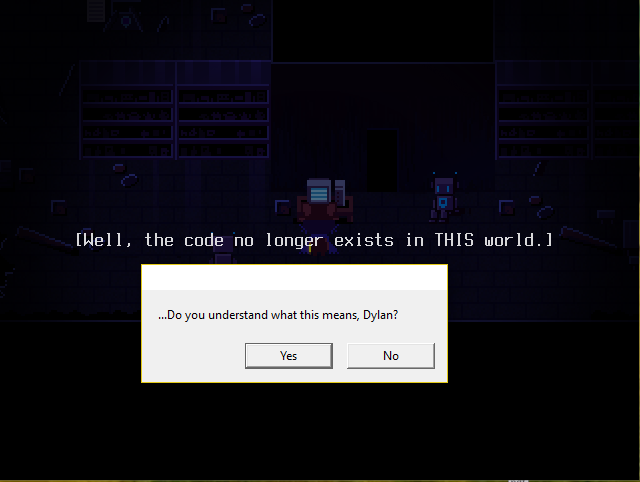 If not, don’t worry. You’ll get it soon enough.

The Entity is where OneShot starts getting experimental, which is to say that it starts playing with its own essential game-like nature. It does this in a functional, systematic way: It’s less Spec Ops: The Line‘s “you were playing a game all along and you could’ve quit whenever you wanted”, and more The Stanley Parable‘s questions what it means to play and choose within the confines of a rigid system, or The Beginner’s Guide‘s use of gameplay as a direct driver for storytelling. Even more accurately, it reminds me of Hack ‘N Slash, the Zelda-esque adventure game that saw you literally physically change the game files through Lua programming.

Whenever The Entity rolls around, it’s a surefire sign that you need to get your head out of the game. While most of OneShot‘s puzzles are your typical adventure game fare, use-key-on-door, The Entity provides guidance on those puzzles that confront you with the fact that, actually, you’re a person on a computer playing a video game. These range from the cute to the intrinsically confusing, and obviously I can’t say much more about them than this. 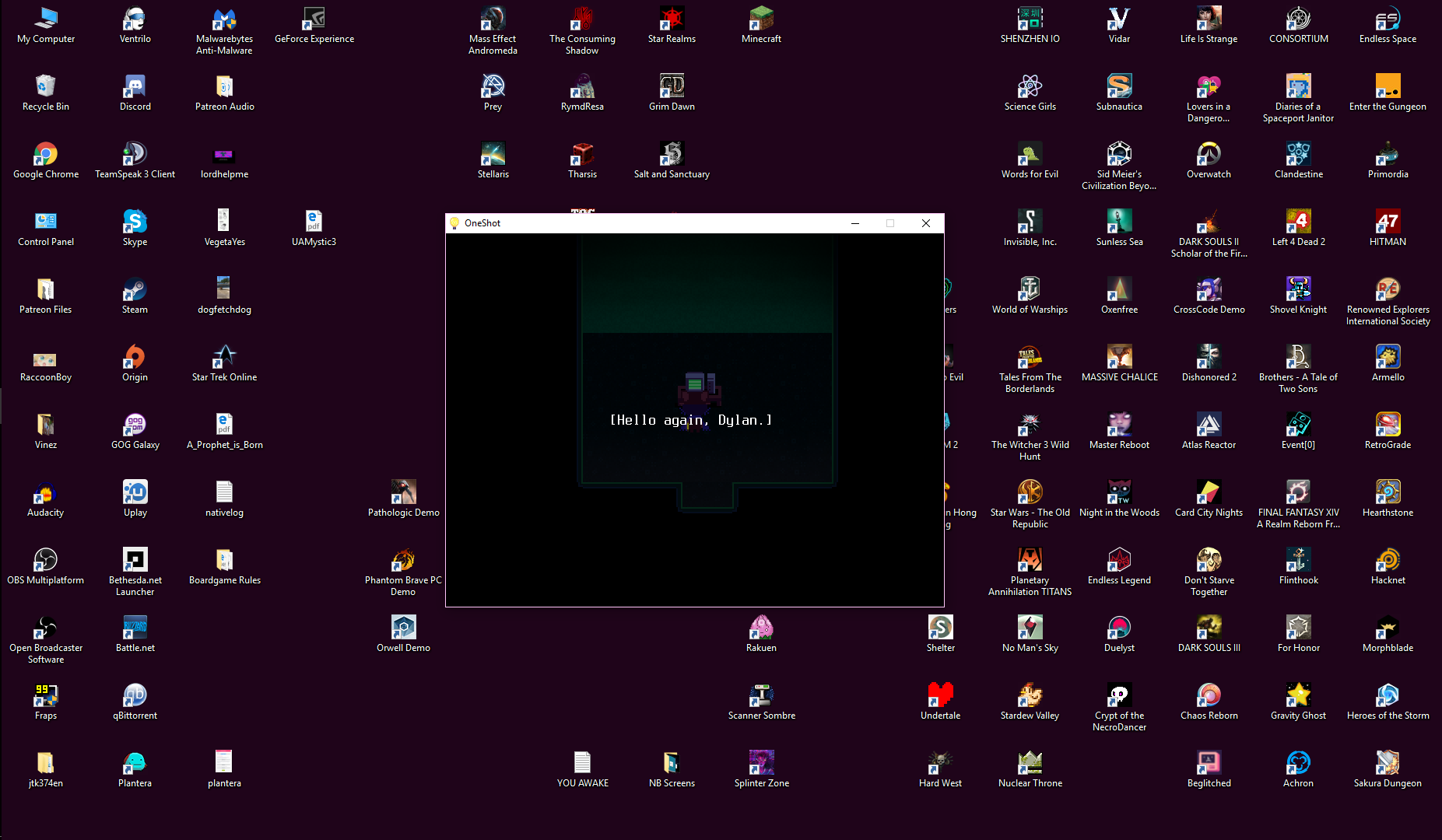 It took me a while to suss out the meaning of this particular message. Maybe you can see the hidden clue sooner than I can?

I love games like this, games that play with the boundary between the real and the ludic. It’s such an interesting space to play in! I also know that it’s not something everyone enjoys: I can name at least three friends that OneShot would probably bounce off of entirely. Which is okay! OneShot is more than just its experimental stuff: In the three hours that I’ve played, easily two, two and a half were typical adventure game fare and interesting character and world dialogue. I won’t say it’s a particularly expansive game: In each of the three areas there’s a small handful of puzzles to solve, generally themed about finding and combining the right objects in the right place. All the same, OneShot‘s experimental flavour definitely permeates the whole of it, particularly near the ending. Just the difference between sleep-saving and regular saving alone is… It’s something I could talk about. 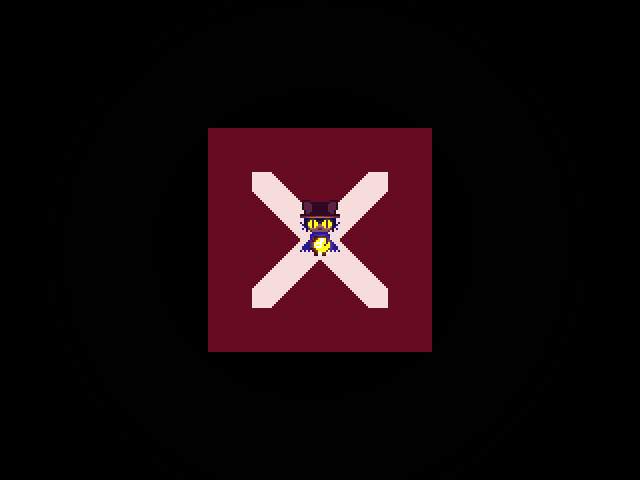 If this was a feature-complete description of OneShot, I’d already be pretty enthralled, if for no other reason than that it tickles my particular fancy. But a final note of approval must go out to the quality of the character writing, which really sells the experience. Of all characters in general, but Niko in particular. It’s impressive how, with relatively limited direct exposition, OneShot manages to sell the idea of you and Niko being a team of strangers in this strange land, out to save the world together. My favourite bits of dialogue didn’t relate to the world backstory or the other characters, but were the parts where Niko would talk about their confusion, or confide fears in me, or daydream about going home after all this to eat their mom’s pancakes. 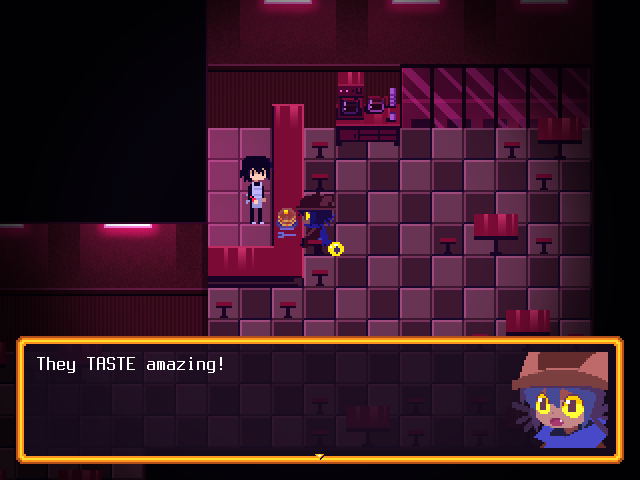 The limited use of talking-head pixel art is clever, as it really sets Niko apart as an involved, expressive character.

I don’t necessarily want to say that I cared for Niko near the end of the game. But I’ll say this: At one point, there’s a section where Niko can’t hear you anymore, and another character lies and tells them that you’ve already went on and that the mission is over. Niko accepts this with sad resignation, saying that they’re at least have liked to say goodbye after everything you two have gone through, and you can damn well bet I was yelling at the screen at that point. 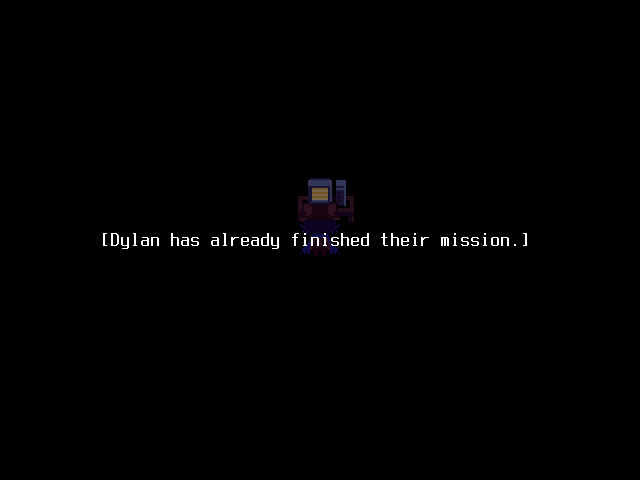 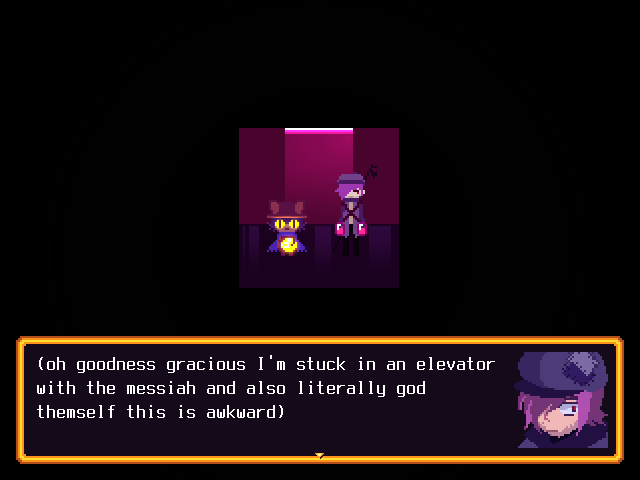 Which isn’t to say Niko is the *only* good character.

And that’s… really all I can say about OneShot! It’s not all I have to say about OneShot, but trust me on this. If what I’ve described so far, the combination of cute character writing and clever puzzling that plays with its own ludic nature, appeals to you even slightly, the best thing you can do is play OneShot for yourself. Under normal circumstances it’ll cost you ten Steam dollars, which I’m going to say is ‘fair’ because ‘honestly too low’ isn’t a reviewer opinion that a lot of people enjoy. Similarly, if what I’ve described so far is only turning you off, OneShot isn’t the game for you. They don’t all have to be!

And if you’re still on the fence right now, well… I don’t know. Maybe more detailed spoilers would help? Maybe they wouldn’t. Would it help if I showed you a cool thing? Obviously don’t click this if you want to preserve the surprise, but I’m hiding the single coolest moment in my entire OneShot play experience so far behind the next link. If this doesn’t make you want to get this game, probably nothing will.

Normal people only get one shot. Top playboys get 1-2 shots. Jarenth is currently on his second shot and counting. Wonder aloud what this babbling means on Twitter or hang out with him on Steam. And if you dig Indie Wonderland and Ninja Blues in general, why not consider supporting our Patreon campaign?