Have you ever heard of a gateway to the Splinter Zone? I hadn’t. The only reason I even know about (primarily) Eric Merz‘s opus is because some well-wishing soul retweeted a call to review action onto my Twitter timeline. Which is perfect, honestly. I’ve reviewed mostly higher-profile stuff the last few weeks, which is fine, but it might be nice to go back to my original roots and really dip into the indie. Look at a game that’s happy with even my C-tier level of extra exposure. As long as the final verdict isn’t ‘this game made me want to claw out my own eyes’, it’s a real win-win situation.

From the outset, Splinter Zone is a clever game: It understands that the fastest way to my heart is to dress up like a late-90s keygen program, complete with ReLoaded-esque cracker music. 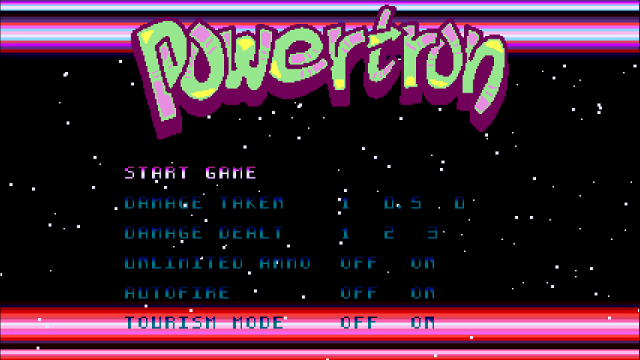 I don’t actually understand what this menu is? It doesn’t seem like a title screen. It’s more of an Options menu, but… for hyper-specific gameplay options? The modifiers for ‘damage dealt’ and ‘damage taken’, and options like ‘autofire’ and ‘unlimited ammo’, make this look like some sort of advanced difficulty menu. But why start off with this? Before I’ve even had a chance to parse what any of it means? I might never know, but whatever the reason, hitting Start Game takes me to what looks much more like an actual title menu. 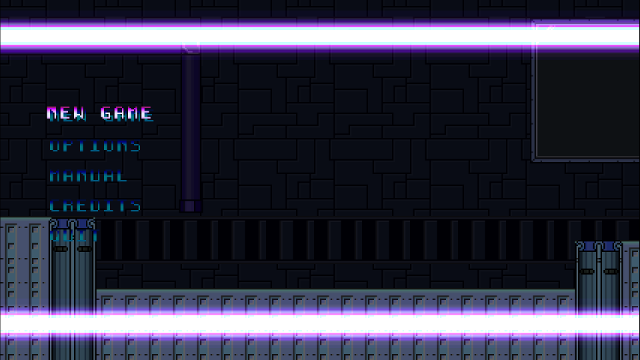 Okay, the actual game options are hidden here. Like Graphics, where I get to pick… Fullscreen mode or one of three window sizes. Or Audio, with no less than two 0-100 audio percentages! No more than two, either. I appreciate the option to rebind both the keyboard and the gamepad, though it’s hard to get screenshots of the former since Splinter Zone just binds my screenshot key to whatever’s currently up. Finally, the Gameplay options menu asks the tough questions. 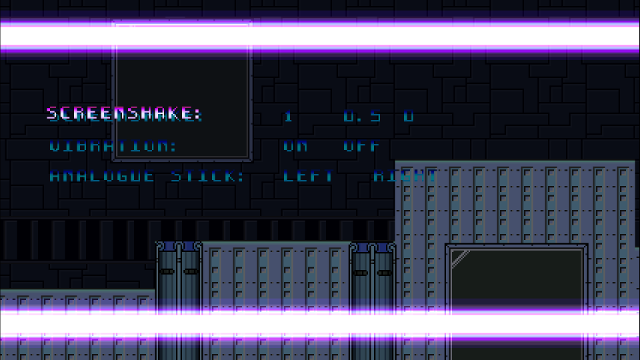 On or off? Left or right? Zero or one?

There’s a small manual, too. ‘Small’ as in ‘there are only two pages’. Page one describes how to jump, shoot, pause the game, and activate Hyper Mode. Page two describes what Hyper Mode is, and its relation to leveling up, apparently? This feels like something I should revisit once I’ve played enough Splinter Zone to actually parse any of this. For now, the title menu is well and truly accounted for. Let’s jump into the game proper and see what I get. 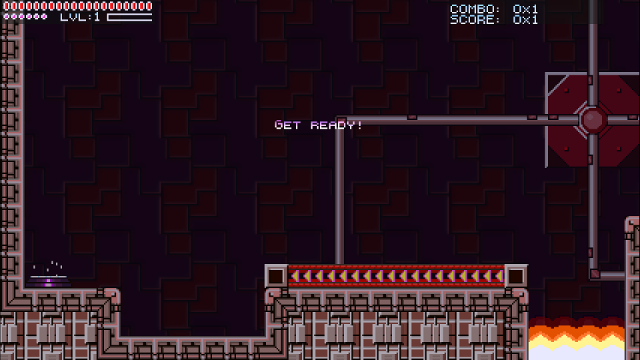 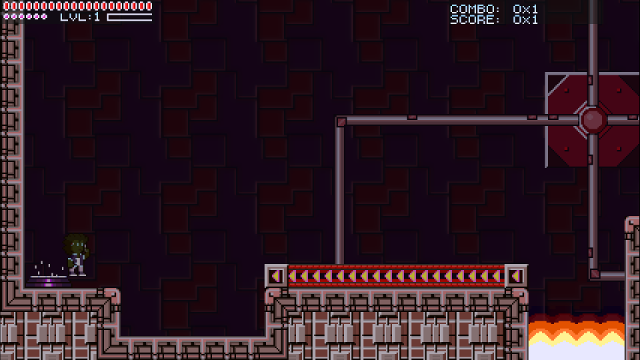 Hmm. This is interesting. First thing I notice is the strongly tiled 16-bit-esque level art style with a lot of primary colours. Second thing I noticed is the brown protagonist with the airy hair style, who I’m going to designate as a lady because that’s the impression she gives off. The character model seems simple at first glance, but actually contains some neat visual detail: The suit, the shaded hair, the subtle facial expression. Combined, the two first impressions are almost enough to get me to overlook the half-dubstep, half-techno playing exhortingly in the background. This is not a game for detail study, it seems to say. This is a game for Action, Now!

Controls are fairly straightforward, as the manual indicated. Left analogue stick moves left and right. A button jumps, just a single jump with strong air control. X button fires my gun, which looks small on the character model but gains in size when active. I can fire in rapid succession up to six times before it runs out; an ammo counter in the top left quickly ticks back up, but not quickly enough to not put a halt on my gunplay for a little bit. 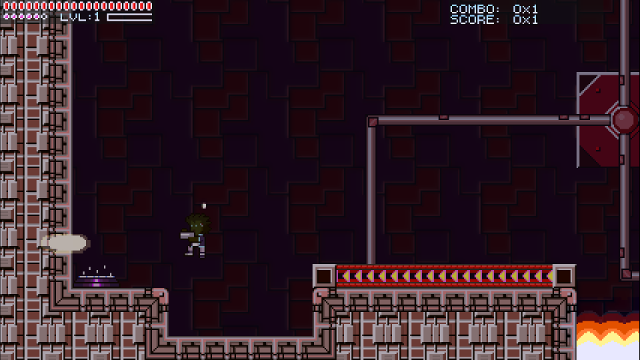 Pictured, here: All of the above.

The B button does… nothing, which is strange, because the manual said that button would activate Hyper Mode. But then maybe I don’t have that yet. The Y button also does nothing, but that’s more palatable, since it’s not supposed to.

I start moving right, since that’s the only way I seem to be able to move. The level I’m in has the aesthetic of an abandoned factory, owing to the running conveyor belt, but also a factory that’s currently burning down, owing to all the fire. I carefully jump from platform to platform…

From the right, something flies in. It’s like a… soda bottle top with eyes? 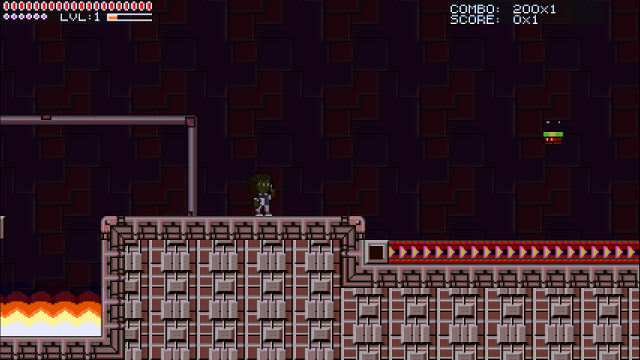 I can’t decide if I think it’s cute, weird, silly, or something I want to recycle.

I don’t trust it, so I jump up and shoot at it. A single hit causes it to explode in a blast of wind and smoke, sending a cloud of energy pellets to fly into me and fill up my level meter a little bit. 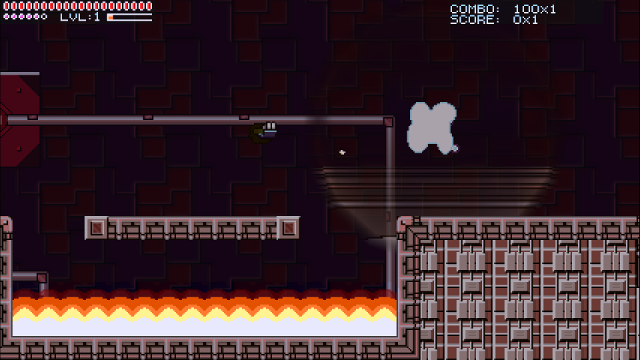 I run into about six of these robots on my way to the right. Most of them I kill, to the same effect. I miss one during my jump, so it flies over me, trying to drop some garbage on me as it passes. No dice, robot. I shoot it in the back, because the rules of engagement don’t count for garbage-dumping robot heads. All the while, I also have to take care to jump moving conveyor belts over fires and one bottomless pit; needless to say, some multi-tasking is happening.

Finally, I reach the right. A larger robot is standing here, similar to the flying robots but standing around in an actual body. As I watch, it reaches into itself, grabs one of the flying heads from its interior, and sends it my way. I respond by unloading my six bullets into it. It explodes in a significantly larger air blast than the previous one. 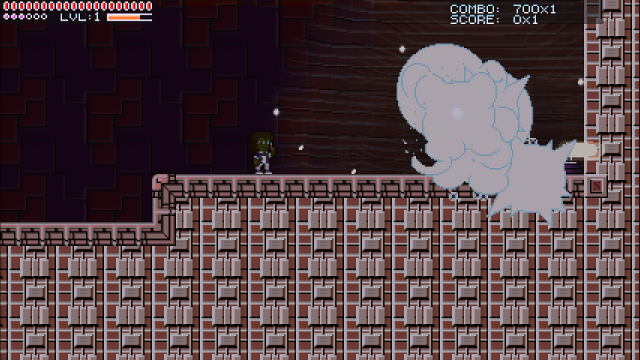 Final boss of the game: Defeated???

With the big bot out of the way, I can now access a purple platform at the very right. I jump onto it, and for my troubles I’m teleported to an entirely different place. 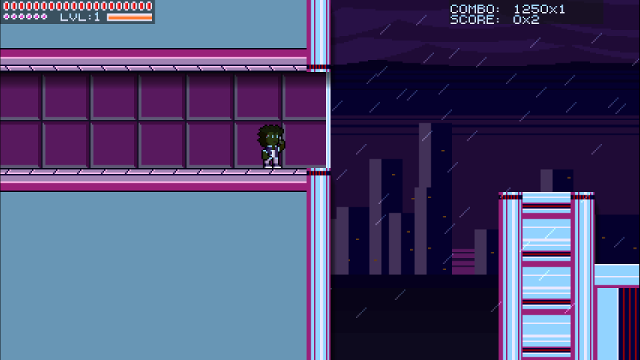 Well. I can’t believe I’m saying this in the actual literal meaning of the words *as well as* in the spirit, but ‘this is new’.

This new area is a teal-and-pink city, alternating interior hallways with running across outside rooftops. I jump through breaking glass, dodge bouncing robot chargers, and rush across a cracked building roof before the whole thing collapses. It’s very Canabalt, is what I’m saying.

But before I can figure out what it it or does, I misjudge a collapsing building jump and plummet face-first into the abyss. 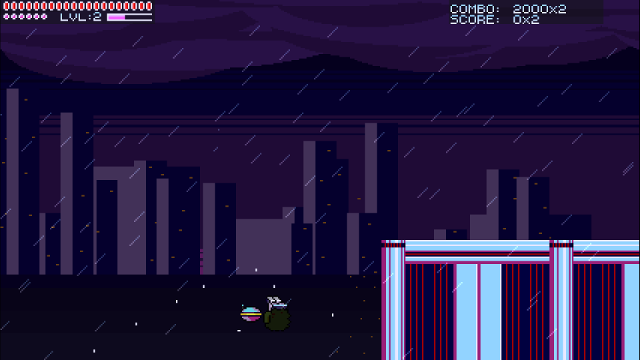 Impassionate, Splinter Zone shows me my play statistics. Score: 4000 points. Goal: About 55000 points, I guess. Rank: 66 thousand and then some. Your performance was insufficient. 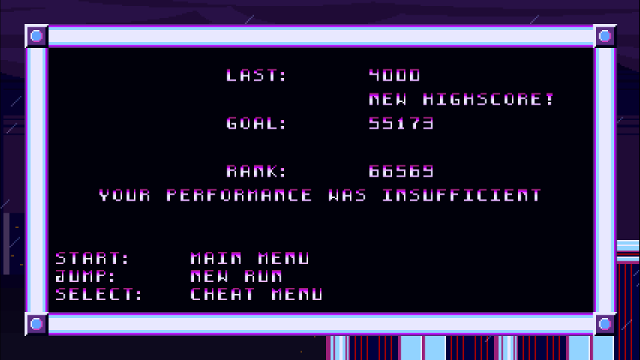 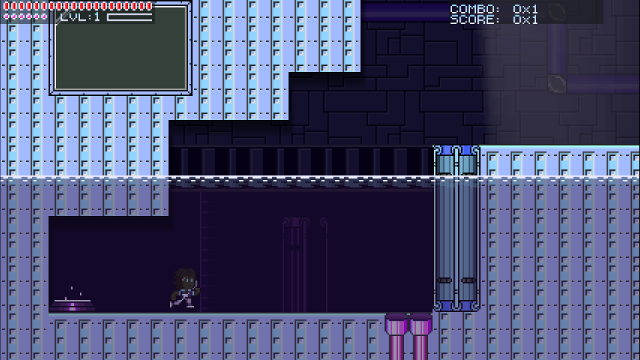 It takes me about five minutes of hopeless jumping and fiddling before I suss out that I have to stand still on the pink pipes to get a jump boost, so consider this my early warning. Learn from my mistakes. Beyond that, this is… new, but also the same. This time I jump over water, avoid confused-looking spike suns, and unload my gun into robot mortar gunners that fire sine-wave projectiles. 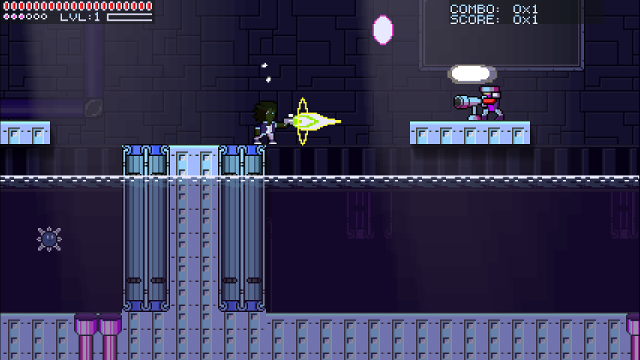 I make it to the end of this level with little hassle, save a few hits from the mortar gunners. I notice immediately that a single hit wipes out more than one health pip, which is interesting. Maybe that’s enemy-dependent?… I notice only later that getting hit also drains the XP I earned earlier. I consider this less rad. But eh, I’ll find more in the next area.

Except then the next area contains icy spikes, which I accidentally fall onto while trying to jump for a ladder. 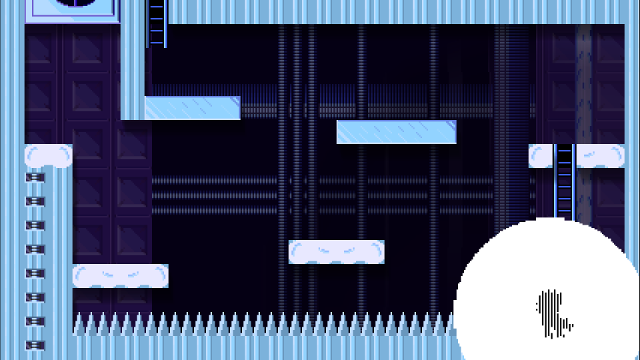 The icy spikes don’t mess around. 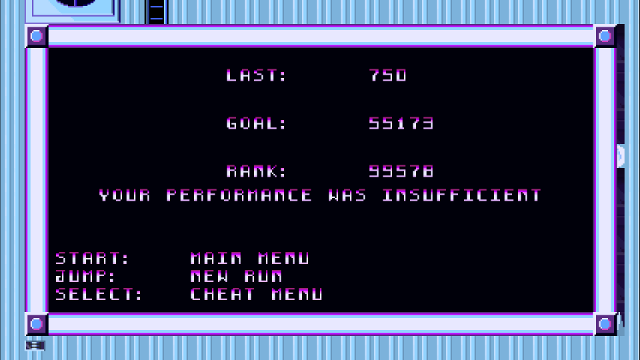 Yeah, yeah. How did I do so much *worse* this time?

Third verse, same as the first. Which is to say, I start in the same level as the first time around. Then I move to another ice level. Then I move to another teal-pink rooftop level. I actually live long enough now to get one of those Ovoid Friends again, and to learn what it does: When I fire, it fires too, like a Gradius Option that wandered from its spaceship. I wonder what happens when I hit level 3? I won’t find out on this run, because a floating hover tank just put an energy ball through my hurt self.

Finally, the fourth run promises something like progress: After surviving four levels without exploding or falling to my death, the fourth teleporter leads to an honest-to-goodness boss fight. I find myself facing down a… floating purple crystal, apparently. It flies from side to side, exposing a fragile face only as it travels, and alternately drops ice crystals on the frozen floor and fires coloured ice crystals directly at me. 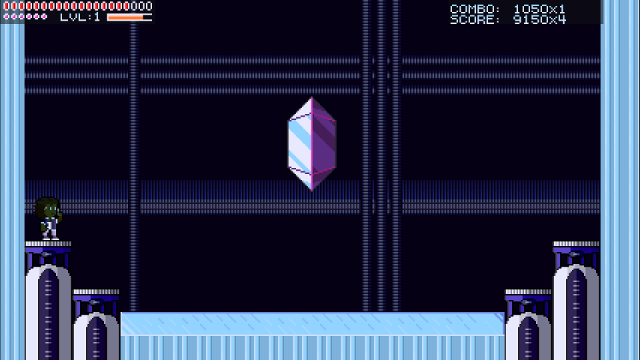 For reasons I’m not 100% on, there’s an initial period of about ten seconds where both me and the boss are just standing around, not doing anything.

I’m good, but the crystal is better: It slams into me over and over while I land relatively little hits on it. But on the bright side, my score of over 40000 points is easily the highest I’ve gotten so far! It’s actually close to the goal score; dare I dream, on the next run? 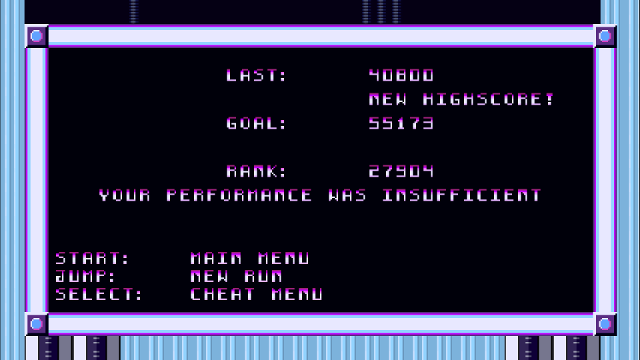 I’ll call this one ‘Progress.PNG’.

Am I actually getting better, or was this just an artifact of chance? Is this always the first boss, or is it based on the levels I played, or is it random? Will I ever beat one of these bosses? And what is Hyper Mode, which I still haven’t been able to activate? I don’t have the answers to these questions yet, but I hope to have reached them by the time you turn to the next page; I really hope so, because I don’t think ‘and then I was never able to progress’ doesn’t generally make for a good review. But who knows. Wish me luck!