I’ve been eyeballing Scanner Sombre for a handful of weeks now, ever since a random Rock Paper Shotgun news announcement that I since haven’t managed to find again. The theme of exploring dark underground caves through the mechanism of rainbow lights appeals to me, what can I say. I’m a sucker for some solitude. Plus, Scanner Sombre is developed by Introversion Software, the people behind such big names as Prison Architect, Darwinia, and a personally formative title of mine, Uplink. They’ve got a history of games that I find neat or at the very least interesting, and they’re applying this to a theme that I can see myself literally and figuratively get lost in for a while; I don’t want to say that Scanner Sombre was made specifically so I’d review it, but the numbers don’t lie.

Though it is interesting to note that for the longest time I mentally referred to this game as Scanner Sombra; maybe my subconscious is telling me that as much as I think I’ll enjoy a solitary cave dive, I might enjoy it even more with a cast of diverse and colourful fightin’ dads.

Alright, I’m immediately digging this opening. Colourful lights with a promise of darkness, gloomy music, Darwinia figuring. Message of the day. “Welcome to Scanner Sombre!” Scanner Sombre has been saying for a month and a half now. That’s not really how a ‘message of the day’ generally works, but then again, what do I know. Maybe cave rules apply.

In lieu of zooming in on that, though, look at these options! They’ve got a resolution! And a quality filter! And a field-of-view slider! And… and pretty much nothing else! 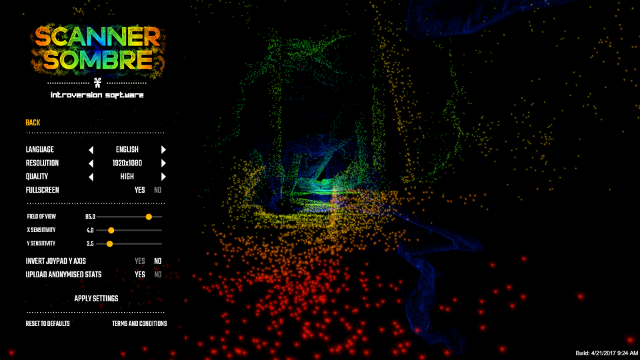 So either Scanner Sombre has no audio *whatsoever*, or it’s telling anyone who’d prefer audio level to be a game option to go fall down a dark pit.

So: no to audio sliders, no to customizable controls, but yes to collecting anonymized user data? These are some odd options screen priorities. At least they ask, I guess. All the same, seeing this leaves me a little gloomier and down-to-Earth than I was after just booting up the game.

Which I suppose is the exact mindset I should have. Cave adventures, ho?

I start in a tent. 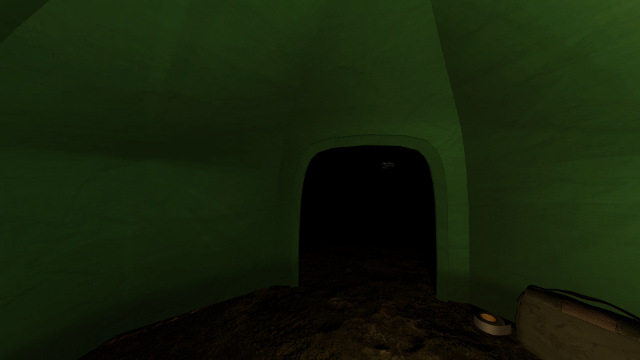 It’s an okay tent. Could use a front flap or something, and maybe a way to close the door.

I’ve got everything a prepared cave explorer needs in this here tent! A backpack, a small bag, a toolbox, some water bottles, scotch tape, a picture of my family. A magical invisible light source that manages to illuminate the inside perfectly, but doesn’t spill outside more than half a meter. Which does a good job of illuminating the contrast, because the outside is… 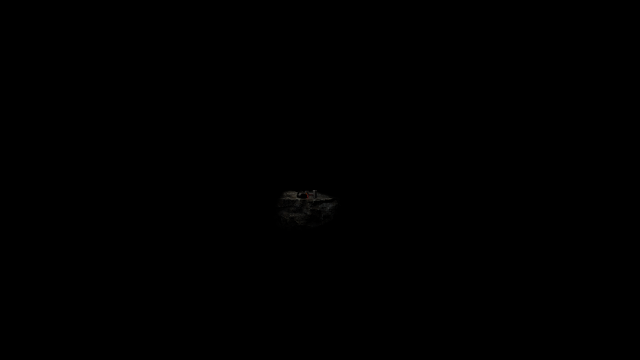 Everything that isn’t the tent and its small island of light is absolute impenetrable darkness. Everything? No, not everything. Far in the distance, I see another small island of light. There’s an insistent beeping noise coming from there to boot. So, with nothing better to do — or any idea what I should be doing — I carefully walk over to the one bright spot. Hoping against hope that I won’t bang my shins on any hidden darkness-rocks, or, you know, fall down any sinkholes.

The light island in the distance turns out to be a small illuminated patch of rock. On it lie two things, the source of the beeping. One is essentially a VR headset; my character immediately reaches out, grabs it, and puts it on. 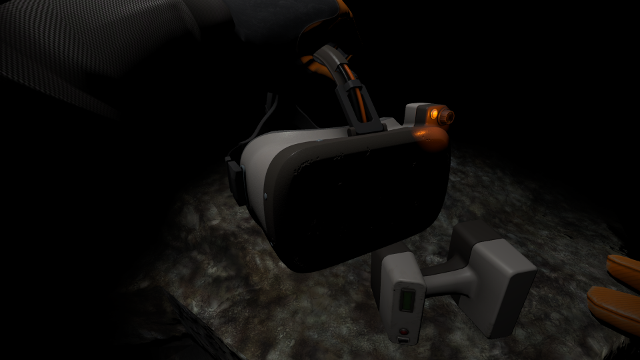 ‘Weird piece of technology in the middle of nowhere in a Stygian cave? Gonna put *that* on my face and eyes.’

The other thing is… At first, it looks like some sort of square dumbbell. Or half a Nintendo ROB. I have enough prior knowledge to know that this is probably the Light Imaging, Detection, And Ranging scanner that I’m going to be using to make my way around the cave, but it could also be an early 90’s console peripheral. 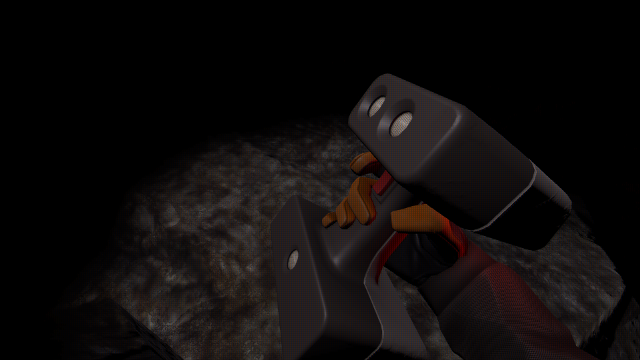 The predetermined movement ends, and I’m left standing with a LIDAR scanner in my hand. And a big yellow tutorial prompt splashed across the screen. 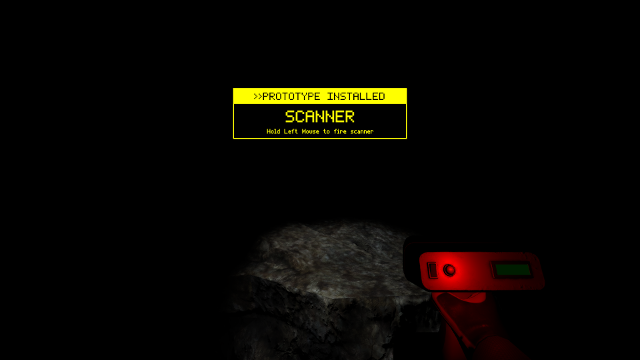 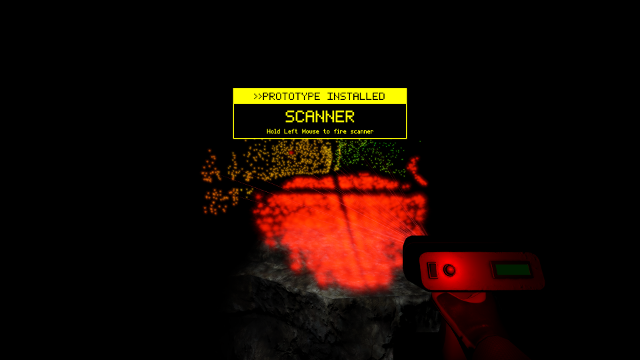 I hold down the left mouse button, and the scanner starts… The best way I can describe it is that it constantly fires small beams of light from its main apertures. Slowly, the area I’m pointing at starts filling up in colour: I infer that whenever a light beam hits a surface, it marks it.

This is… not what I was expecting, honestly. When I read about using a scanner in total darkness, I envisioned something more like a sonar, firing pulses of visualized sound to get temporary ideas of what the cave looks like. In contrast, what I’m doing right now feels much more like painting. As I sweep my scanner over the area, more and more colourful dots appear, slowly visualizing the cave outline in green, red, yellow, and blue. 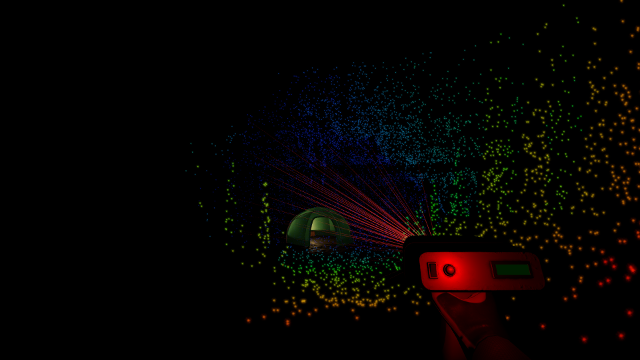 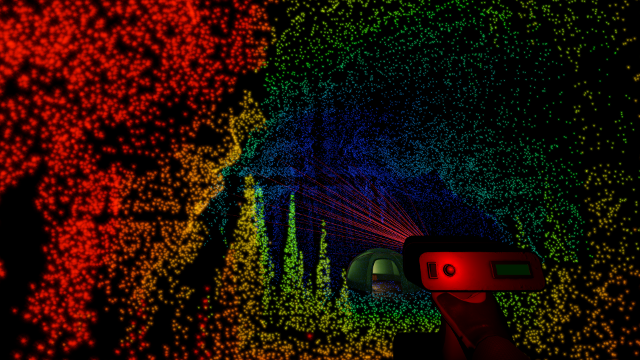 It’s not what I expected, but once I shove those expectations aside, I find that this is cool all the same. There’s something fulfilling about filling out the cave walls and its stalactites and stalagmites, like slowly uncovering a secret. The different light colours are used to good effect: Surfaces that are closer by are painted in reds and yellows, while farther-away surfaces are tinted green and blue. It’s a dynamic process, adjusting itself as I walk around and scan. I have some questions about how this actually works, but as far as gameplay goes, I’m engaged enough. 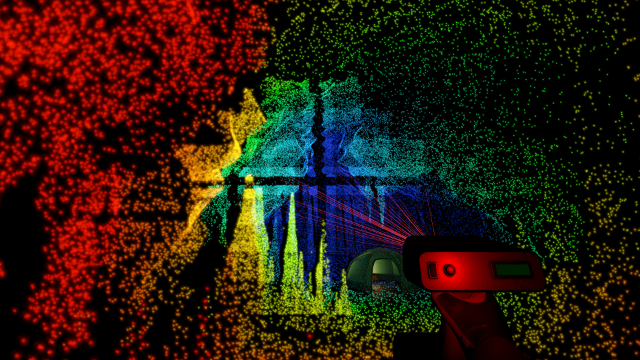 The longer I scan one particular area, the more the picture is filled out. Except for that cross region. At first I figure it means there’s nothing there, but then I move the scanner around a little bit and start seeing it filled in — I think maybe the scanner just has a blind spot?

It takes me a good minute of walking around and scanning before I’m satisfied with my illumination of this place. Looks a lot better now. And then, the rest of the cave awaits! 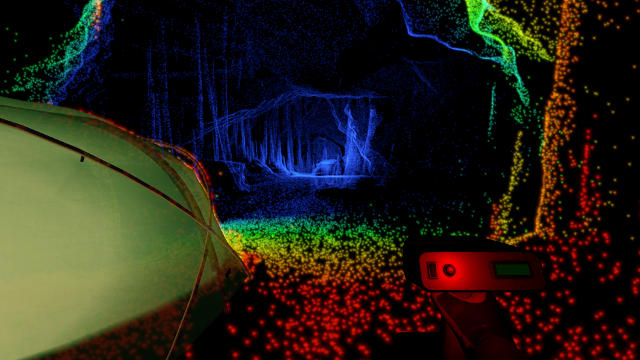 I use the LIDAR scanner to make my way through a small, winding cave opposite the tent. It’s dark in here, but oddly, it’s so dark that it’s actually not claustrophobic — I can’t possibly feel trapped when I can’t feel any feelings in relation to this space. I might as well be in actual outer space, for as much as this area is real.

What also doesn’t help, or I guess it does help in overcoming any claustrophobia, is that the scanner can apparently keep track of the cave layout through walls. As in, when I walk into the small cave and follow the curve to the left, I quickly spot a ghostly outline of the area I just came from in the distance. It’s already easy to forget that I’m not looking at actual light, but that I’m wearing a VR headset that visualizes the scanner results. There’s no reason why it wouldn’t permanently show every place I’ve scanned; or if there is a good reason, ‘because there’s real stone in the way and my brain expects this to not be possible’ isn’t it. 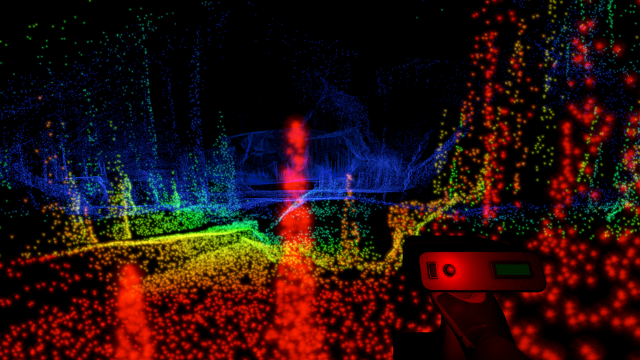 It’s a *little* spooky, I won’t mind telling you. Between this and the slow gloomy music, Scanner Sombre still manages to summon *some* sense of being trapped underground.

I paint my way around one, then two, then three corners, the ghostly imprint of my trail a constant friend — or at least, until I paint over the intervening wall with enough intensity. Just as I wonder if there’s any actual purpose to all this, teal text pops up in the top right corner. 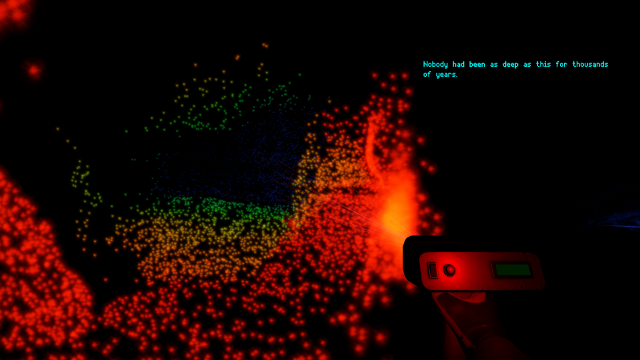 It is now: Story time.

The text announces itself short, scratchy jingle. “Nobody had been as deep as this for thousands of years.” Silence. Scratch: “I was utterly alone. No call for help would ever reach the surface.” Silence. Scratch: “My friends all told me I was crazy. My wife couldn’t understand my obsession. But I had to know if the myths were true.”

Silence. That’s it, I guess — at least for now.

Every now and then, the cramped hallways give space to more open caves. Both are interesting to scan: The hallways give a more immediately sense of pathfinding and progression, while the caves are more interesting from a discovery and exploration point of view. What’s over there? Ooh, what’s this structure? I swing my scanner around and catch a pillar I’d completely missed in the beam. And in the distance…

Well, this is new. I see two large scanners, easily visible through their yellow outlines. As I get close, they activate, bathing the area in red light lines. Illuminating a hanging bridge I wouldn’t even have known to look for. 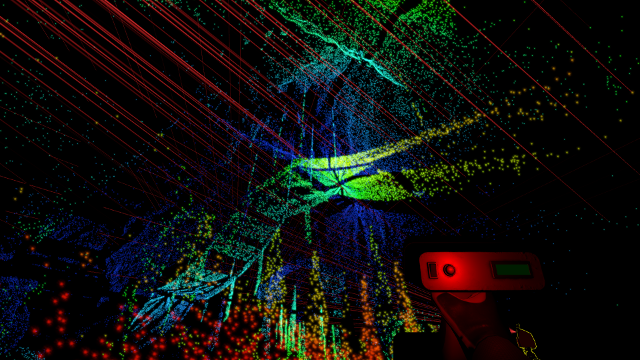 Wait, a bridge? Yeah, it turns out there’s evidence of human construction in this particular cave area. A hanging bridge, mostly intact, with ropes I can scan to the ceiling. There are also structures in the middle of the room that resolve into arches and pillars, in various states of disrepair. I scan each and every one of them, laboriously, to see if I can learn anything else. And also just because I want to.

Not far off, I find something I probably should’ve grabbed earlier — a new scanner! Or rather, an upgrade to the scanner. With this ‘aperture control’ upgrade, I can now use mouse wheel or Q/E to change the focus of my light beams. I can focus them closely together, to very quickly uncover a small area, or I can put them wide apart, to slowly scan an entire room at the same time. 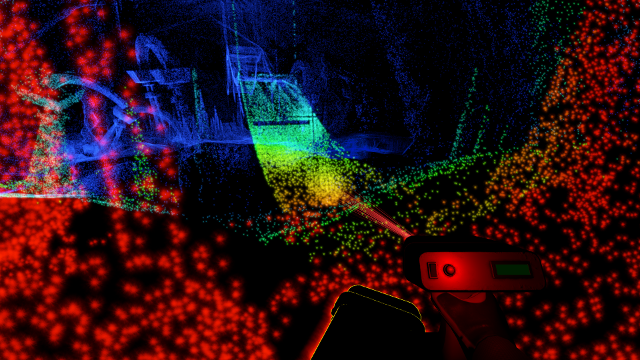 Let me just make *really* sure this bridge is structurally sound before I step on it. Because that’s apparently the only way to proceed.

With my new tool, and (I have to assume) to promise of more upgrades later down the line, paint-exploring this entire cave starts to look more and more like a viable prospect. Wonder what else I can find down here. Maybe more evidence of human civilization? Bridges, pillars, statues, houses?

Or maybe just an incredibly creepy human figure, T-posed in the middle of apparent nowhere? 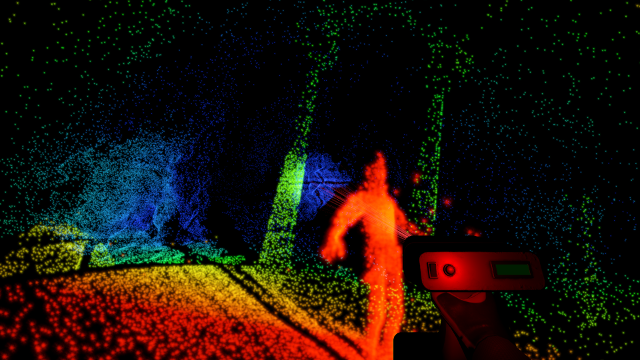 The worst part is, I can’t *un*-find this now. The scanner will have it on register forever.

Well. This is… The creepy music ratchets up, and suddenly I remember why I’m playing Scanner Sombre late at night, with all the lights off — even my second monitor is dark.

I focus on the cool temple-like area I’ve found myself in, and try to ignore the human figure that probably won’t relocate or jump to life as soon as I stop looking directly at it. 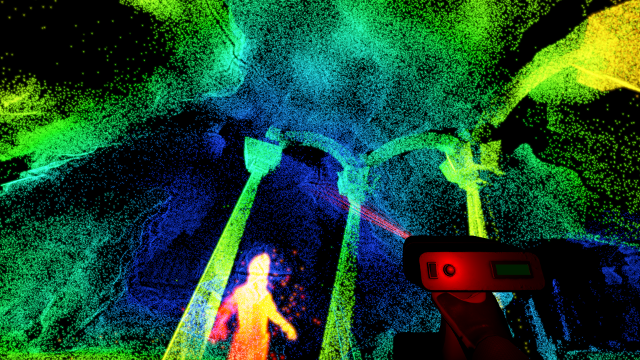 Okay Jarenth, pull yourself together. There’s nothing to be worried about. It’s probably just like, a statue or something. Could check real easily if I had any kind of light source on me, like a flashlight or a match. Or even the red light on the scanner! Just put that real close to the thing and… But then there’s no button for that, huh?

Maybe there will be! Maybe one of the upgrades I haven’t found yet is a ‘make sure this creepy thing is in fact just a pile of stones in the vague shape of a man’ upgrade. Maybe what I should do is just keep playing, never looking back, and then I’ll find out soon enough that this game isn’t actually intended to be creepy at all and everything I think is scary is just figments of my overactive imagination.