Look at Earthlock‘s nice opening screen. It’s got colour, it’s got variety, soothing pseudo-fantasy music is playing in the background. I’ll tell you what this title screen is: It’s pleasant. 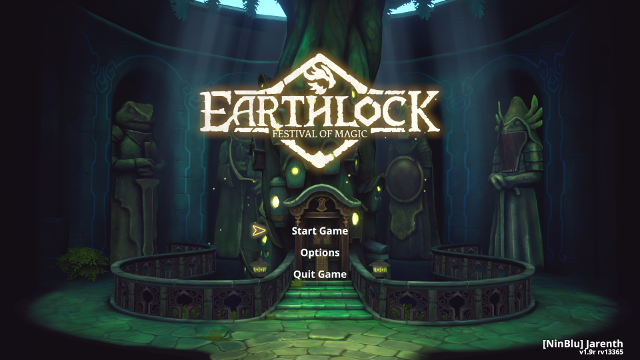 I could stay and watch this title screen for *whole seconds* before feeling urged to move on.

Some of you may wonder why I often spend so much time talking about title screens and options and the like. The reason for that is simple: The title screen is like a game’s welcome mat. It’s the first thing you see the first time you play, and forever after that. It’s the game’s first chance to grab you. If it works, if the game overall is good, you’ll generally rush past it on subsequent loads, just like I don’t look at my friends’ welcome mats when visiting their houses for the tenth time. But that first moment can still be something special. I like to share that. Particularly if it’s pleasant.

Which is why it’s so disappointing that Earthlock‘s controls screen breaks with the established aesthetic so hard. 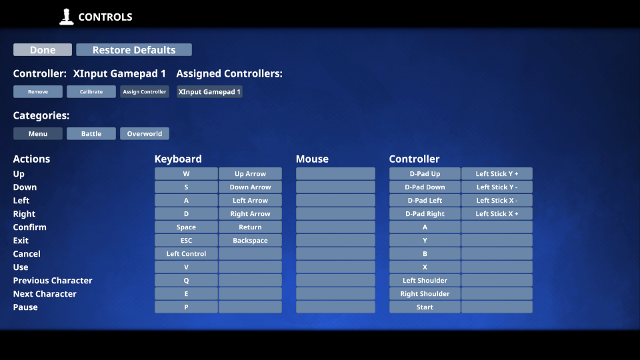 The other options screens aren’t like this: You’ve got your audio sliders and your fullscreen toggle and even a text speed selector, all in the same general aesthetic as the menu at large. This just feels… I dunno. ‘Editor-default’?

That said, I find that now that I’ve talked about it — and worked in some screenshots that show the zenith and nadir of Earthlock‘s opening aesthetic choices — I find I no longer have a desire to stick around here much longer. Set my audio, set my resolution, turned the VSync off. Let’s see what this game is all about, again.

“The ruins of the past. Shrouded in mystery…” 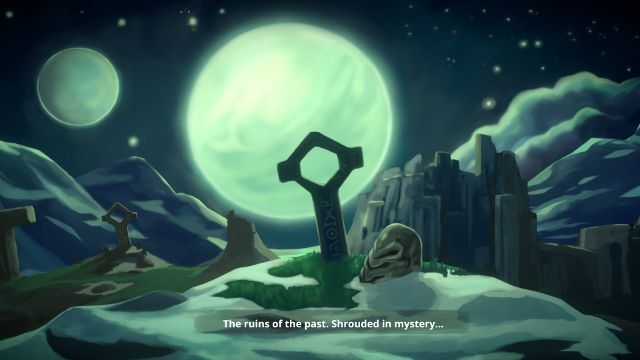 A whole story’s being told here, but I’ll summarize it for you: Once, a mythical civilization ruled the planet Umbra, using a magical energy called ‘amri’. Then there was an uprising. Then the planet stopped spinning, kind of, just like that. The mythical civilization disappeared from the planet that now has a Day half and a Night half. So there were some monsters, some rebuilding efforts, some lesser civilizations that are still cool, you get the general idea. 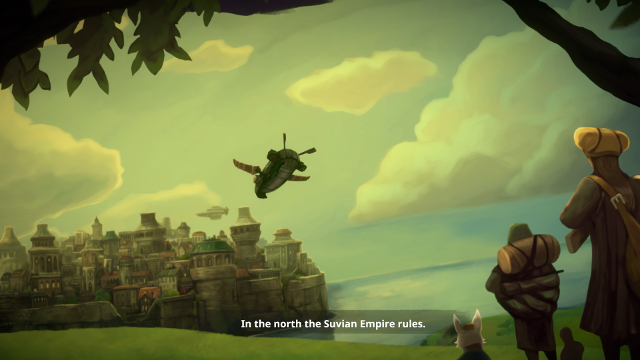 The new civilizations were at least cool enough to invent airships.

Trouble’s a-brewing in the northern Suvian Empire, and that’s where our story begins. 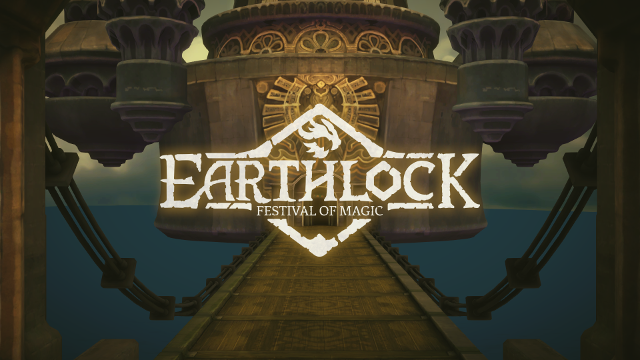 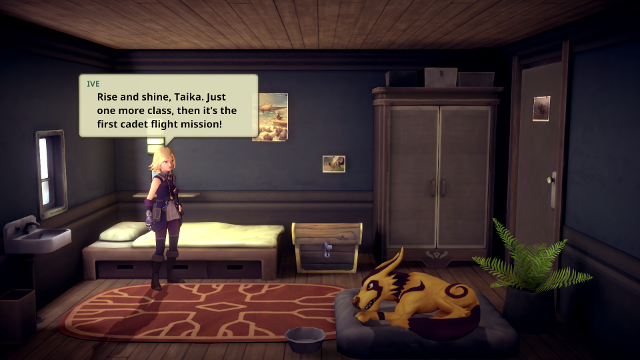 And her… dog? Tiger? Tigerdog?

This is Ive. Say hello to Ive, everyone! Ive is short for Ivory. Ive just woke up and she’s late for a class, or maybe her first flight mission; either way, we can tell she’s a JRPG protagonist. She’s also my spell checker’s worst nightmare, but that’s neither here nor there. 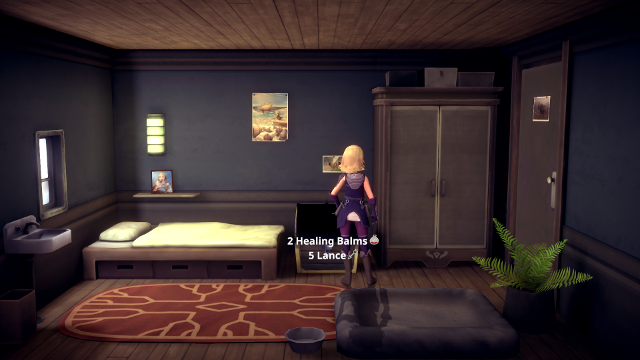 She also keeps healing potions and weapons in a chest in her room. So that’s strike three.

I try around the controls a bit. WASD moves Ive around. Spacebar inspects things, like Ive’s dog’s food bowl, or the aforementioned chest. Escape opens a menu. And… that’s it, I guess?

Ive grabs her ‘slinger’ and her ‘power glove’ from a cabinet. She’s ready for the exam! Then I walk towards a door, and before I can even parse that a door is nearby, a screen transition loads in. I am now in a hallway. 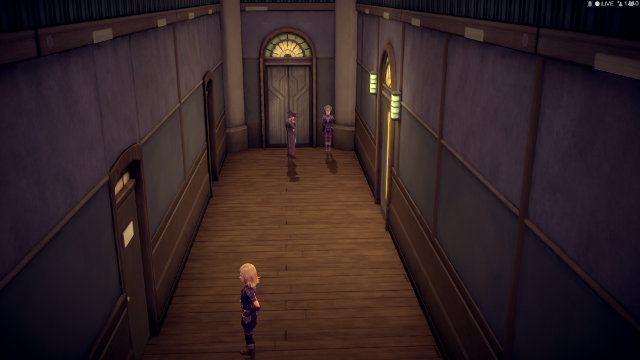 Exits are to the west, west, north, and east.

In a moment of startled confusion, I hit the A key. Ive moves two centimeters closer to her room door. A screen transition kicks in before I can course-correct. I am now inside the room again. Ah, I see how this is going to be. Not annoying at all.

A few screens of Ive-wrangling later, I’m in the exam hall. I quickly take the time to hit the Escape menu, and study up on the supplied material. This proves to be a mistake. 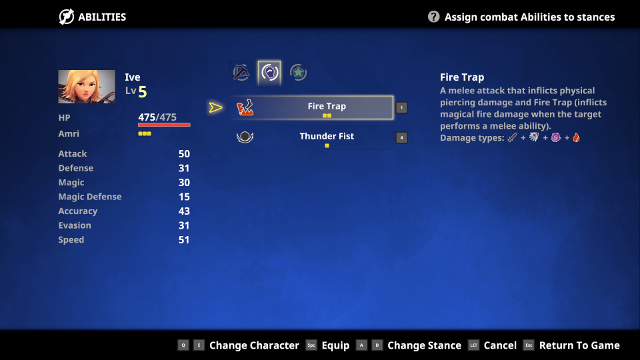 Man, this is a lot of stuff to get through. If only there was some sort of conveniently-placed combat tutorial I could fall face-first into. 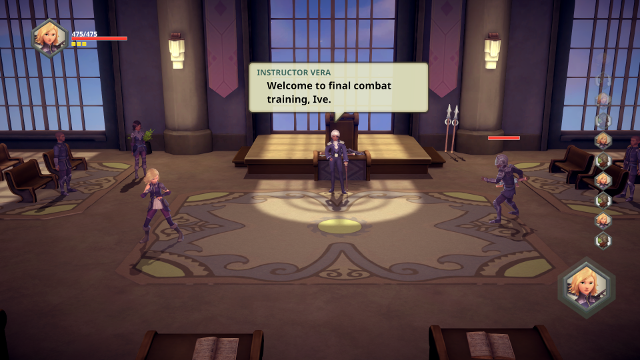 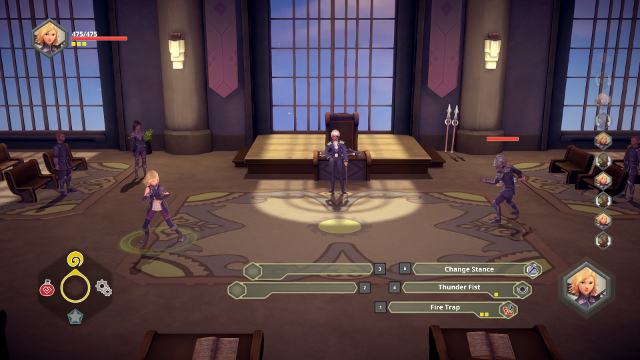 Lots of colourful options and indicators.

Over the course of three rounds, combat is explained to me like this. It’s essentially turn-based, in the Final Fantasy X style, with the action order visible on the right side of the screen. Ive has two abilities she can use: A Thunder Fist, and a Fire Trap. Each take a certain amount of amri, which are my yellow cubes. I regenerate one amri cube per turn, so Thunder Fist can be done into perpetuity. Abilities are activated with the keys 1-4, or, I have to assume, the controller face buttons. 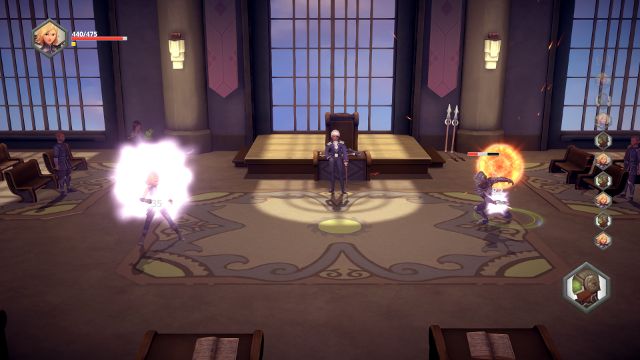 But there’s more! The menu in the lower left is controlled with WASD, and this switches between modes. In attack mode, the number keys activate abilities. But I can switch to item mode, and suddenly those same number keys activate the healing potions I picked up. If I go into options mode, I can ‘rest’ to regain more energy, or ‘feign death’, except I can’t. And then there’s a bottom option, a blue-white star, but that one’s unavailable. 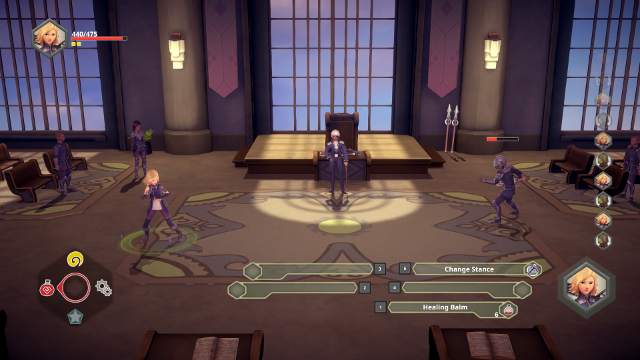 Good thing I grabbed those potions.

I beat Suvian Trooper, so the instructor next brings out… a horrible flying beetle monster, Jesus. Because it’s flying, I can only hit it with ‘ranged attacks’. Good thing I grabbed that crossbow earlier. But to use it, Ive has to switch from ‘Scout Stance’ to ‘Slinger Stance’. This switch, which can be done from any sub-menu with E, takes an action, but unlocks a whole new suite of combat abilities. 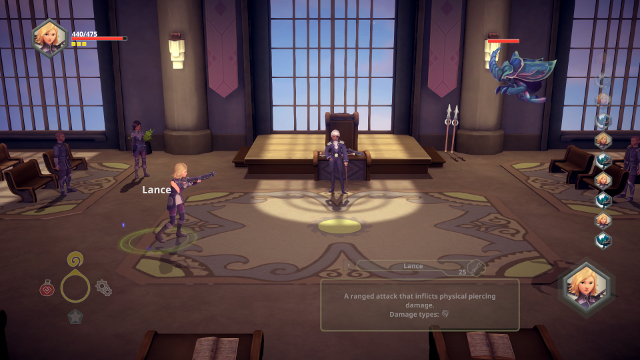 And a different combat model, to boot.

The final tutorial is a little different, as it doesn’t actually start out in combat. Instead, it introduces the idea of ‘engaging’ enemies. The long and the short of it: Earthlock doesn’t have ‘random’ encounters, but enemies that are visible on the world map. Getting close enough to these draws their attention, and they’ll start running towards me. If they hit me, or if I track them around for too long, turn-based combat does start, with them getting the first hit in… But I can hit Spacebar at any time to fight all engaged enemies, with me getting the first hit.

I can immediately see the shape of this. You can kite enemies around and actually lose them if you’re clever, but there’s only a short time before combat auto-starts. So, obviously, starting combat is about creating manageable groups of enemies to fight at a time. Earthlock reinforces this idea by…

Huh. Actually, Earthlock doesn’t reinforce this idea at all. In fact, it seems to be egging me on to fight as many enemies as I can get, all the time, Lok’tar Ogar style. 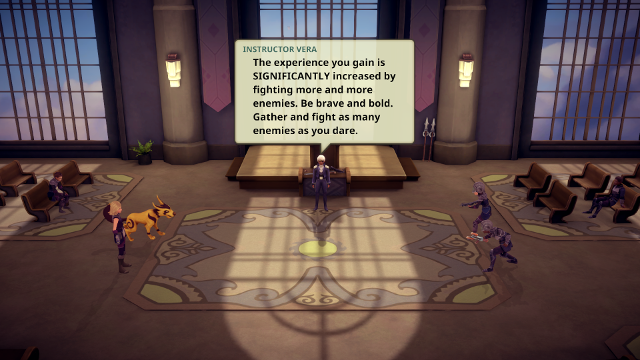 “Come on! What are you, chicken?” — Instructor Vera.

Anyway, I effortlessly trash the remaining Suvian Troopers with the help of my dog, Taika, who apparently knows elemental magics. Exam completed! Now it’s time to select the candidates for the first real-flight scouting mission! And that selection will be done by none other than the esteemed General Lavender!

Who is… Oh. Who is Ive’s dad. Of course he is, of course she is. You can probably guess what trope this is going for. 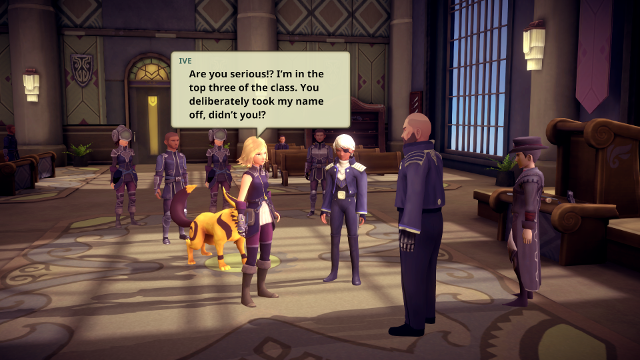 ‘I’m the best soldier around, but my *stuffy old dad* won’t let me get into danger!’

Of course, Ive isn’t going to take this sitting down. And as luck would have it, my classmate Punch — no, really — has a confession: He’s been selected for the flight, but he actually failed his exam! That doesn’t make any sense, for a variety of reasons, but fine. Punch offers Ive the use of his plane instead, so she can fly the scouting mission while he… goes to study, or something.

I run to the flight deck, packed with MonoScouts. New compressors and all. I show my flight papers to the deck commander. Everything seems to be in order. Yes, this is happening! Time for Ive to get her first flight, and show her dad how things are done, all in one fell swoop.

The screen fades to black.

I am now this guy. 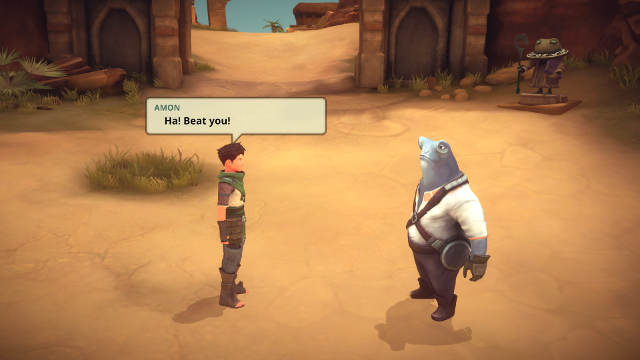 Suddenly and without much warning, I now control a guy named Amon. He’s… some sort of desert scavenger? He came to the ruins that we’re apparently in to hunt for treasure with his Uncle Benjo. Who appears to be, and I feel the need to point this out rather explicitly, an anthropomorphic hammerhead shark. Not once in their initial discussion are any of the questions that this raises brought up. Are there more shark people in this world? Wouldn’t it suck for a shark man to run around in a desert? And why is this clearly human boy called this clearly shark man uncle? 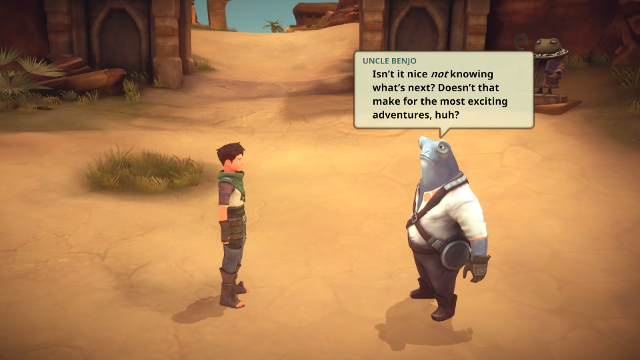 No, listen, it doesn’t work that way. I need answers, damnit!

But alright, fine, I accept that I won’t be getting answers to this any time soon. Just like I won’t get any answers about this mysterious frog statue: Why is it here, why does it look so dapper, and why does it let me save my game? Mysteries like this course like magic rivers throughout the universe. 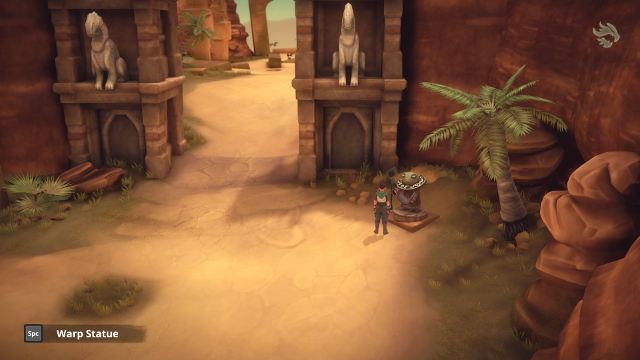 Why is is called ‘Warp Statue’ despite not doing any warping? We’ll never know.

For all my early griping, this desert ruin exploration section does pay off on the build-up from the tutorial. There are discrete groups of enemies flitting about, and I can try to wrangle them closer together for larger combats that result in more experience. Amon fights differently from Ive: While he also has a ranged weapon (a ‘spud blaster’, which, sure), his melee stance involves less elemental traps and punching attacks and more daggers and stealing.

Uncle Benjo doesn’t seem to have a stance. That probably doesn’t mean anything, though. 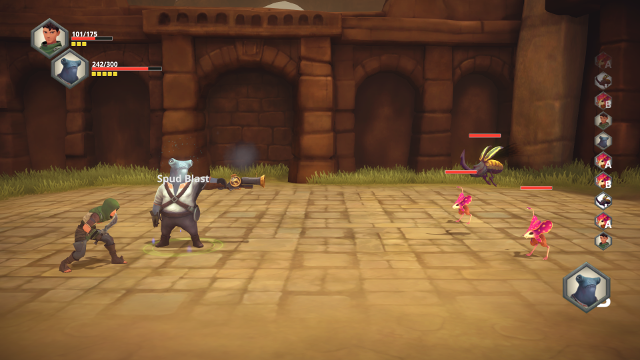 Listen, don’t fucking worry about it. He uses the exact same ranged attacks as Amon and nothing else, but that means *nothing*.

Together, Amon and Benjo penetrate the Zabrium Ruins, fighting beetles and weird plant-like fire mice that scorch us with their tails. Some experience is gained, some treasure is found, and once inside, there’s an extended puzzle section that involves transferring coloured lights from lamps to circular consoles to make platforms rise and fall. It’s a little silly, but it’s also pretty much combat-free, which I appreciate in my puzzle sections. 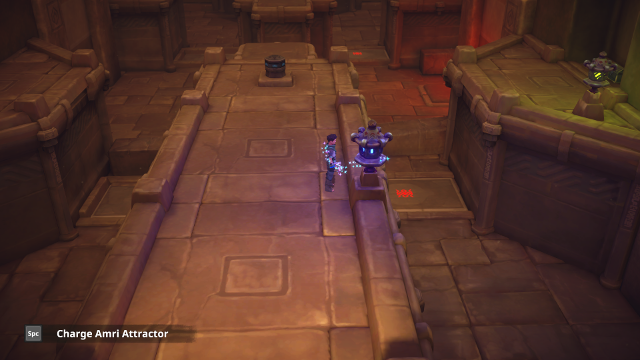 No, the game doesn’t ever stop to tell me what any of this means. Why are these lamps here? Why can I manipulate them? Why haven’t others done so in the past?

And you know what? I’m sure that what’ll happen. I’m sure the disk will be sold, and Amon and Benjo will make a tidy sum, and nobody is going to be followed home by mysterious assassins hell-bent on obtaining the disk for their own nefarious ends. 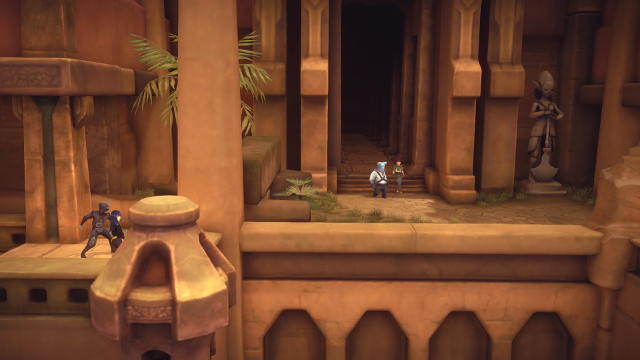 So stop suggesting that already.

Let me just re-iterate that this will all work out fine. In fact, I’m sure that on the next page, nothing dangerous or exciting will at all have happened.