Another relative unknown from the endless depths of my Steam wishlist, Arvi Teikari, Roope Mäkinen, and Joonas Turner‘s Environmental Station Alpha was released a little over two years ago, in a time where the world had yet to turn into a 24/7 Stranger Than Fiction madhouse. I don’t remember how it got on my wishlist, apart from that it ‘seems neat’ from the outset. But it was on Steam Sale a few weeks ago, and so, here we are.

Much like last week’s Flinthook, Environmental Station Alpha isn’t afraid to put the narrative intro cart before the main menu horse. In a style that…

…You know, I actually don’t really know how to describe this. I want to say ‘8-bit’, but then that descriptor tends to be slapped on anything with visible pixels. Is this 8-bit? Is it more? Is it less? I find myself wanting to call it ‘4-bit’, but that’s probably needlessly mean. 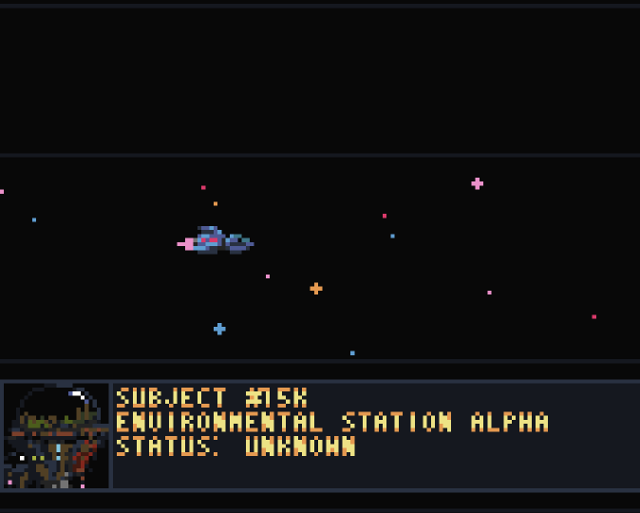 All the same, I genuinely don’t know how many bits are necessary to contain this game.

Anyway. In a chromatically subdued 8-bit style, I watch a spaceship struggle to present the illusion of movement as a short story is spun. The ship is heading to the titular Environmental Station: Alpha, basically a self-contained space zoo / biome collection. It was abandoned decades ago. We don’t know why. This is probably not the setup for grand adventure and mysterious space danger. All the same, though, the powers that be have decided not to send any humans out into the void, but instead a single, oddly orange-coloured robot. 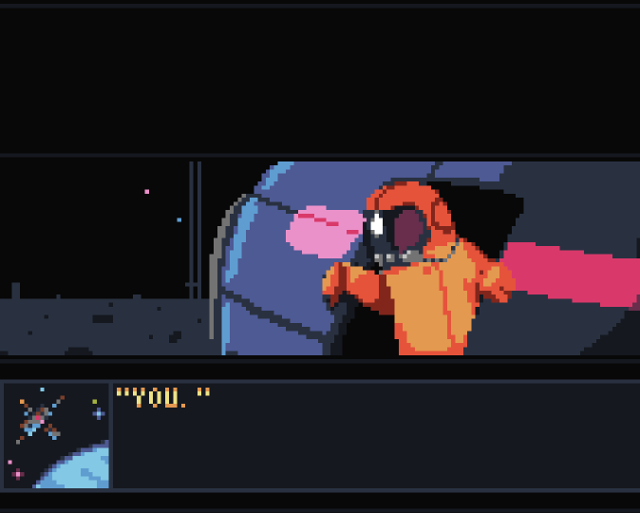 In space, no-one can hear you commit sins against fashion.

I briefly scroll through the settings, which are a level of sparse that feels appropriate for a game of this style. I don’t know why, it just does. We’ve got sound and music sliders, four resolution settings, a few toggles that I don’t really parse yet, and keyboard and gamepad controls. The keyboard controls actually pique my interest, because two of the buttons are bound to the mysterious-sounding ‘Ability 1’ and ‘Ability 2’. Were the developers afraid to spill the gameplay beans in a settings menu? Another Environmental Station Alpha mystery, I’m sure.

Sometimes, when reading game controls before starting, I’ll mention that I ‘can’t parse’ this or that thing. Writing down your controls like this removes that effect… At the cost of making it really difficult to figure out what controls are what later on. Assuming the nomenclature stays that way.

I hit the New Game button, select profile 1 of 3, and choose the Normal difficulty — out of a selection of either Normal or Easy. Immediately the screen switches to a close-up of the spaceship I saw in the intro, and only a few seconds later I find myself… 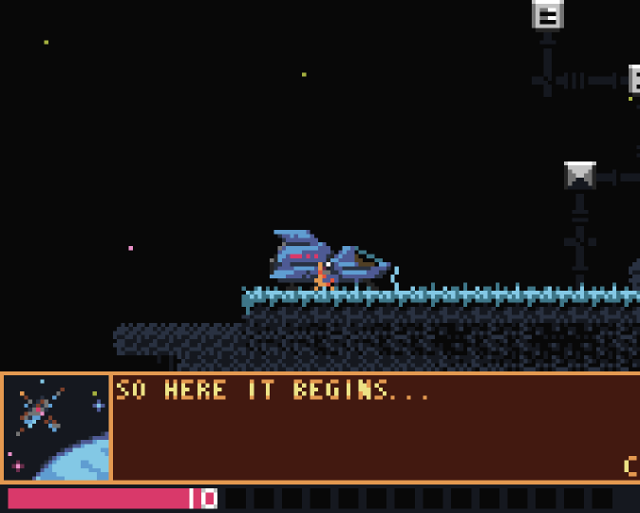 In case it isn’t immediately clear, that small blob of orange pixels is my player character. Was it made orange solely to contrast it against the blue of the ship?

You might be wondering why a spaceship landing at a space station appears to be free-standing on a grassy field, instead of in some sort of docking bay. But, a text box tells me, ‘we can’t use the main entrance because the generators are offline’. Acceptable excuse. I guess that also suggests an initial objective: Maybe I should try to find these generators, and turn them back on.

The game is afoot. Some tutorial prompts bring me up to control speed: Left and right arrow move, C shoots, X jumps. And S summons a pause menu, which contains inventory, a map, and the actual save/exit menu that I figured I’d have to hammer Escape for. Not all of these make a great deal of sense yet. 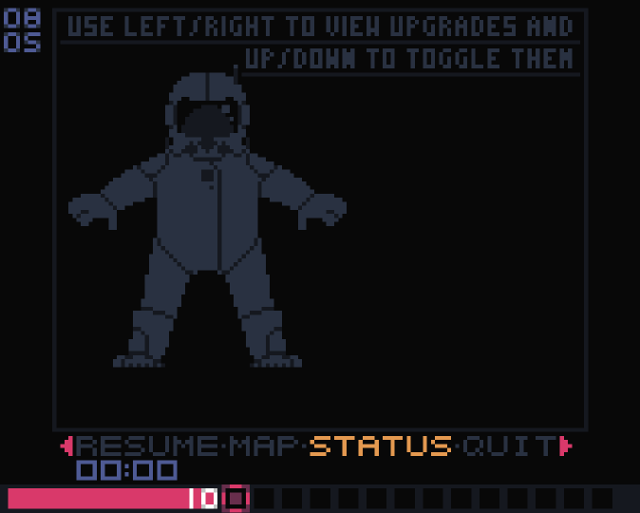 I spend a few seconds walking around, jumping, and shooting. There are seductive grey blocks nearby, but my jump height isn’t quite enough to get onto them. I shoot them, but my short-range laser blast passes through them with no effect. Good to know, I suppose. Options thus exhausted, I proceed into the station. Let’s hope nothing bad happens immediately!

It turns out nothing bad happens immediately, but the station is covered in… I have no idea what these things are. Dirt clumps? Dead vines? Stacks of Jenga bricks? Whatever they are, they block my path, but it turns out this is a problem my laser can deal with. I also find an odd crawling spined creature, mostly harmless, that ignores me in favor of crawling up walls and falling off over and over. I say ‘mostly harmless’, because when I run into it (to see what happens, obviously) the health bar I apparently have in the bottom left corner goes down by 1.

Again, my laser comes to the rescue.

There’s also water here and there. The water doesn’t actually do anything. I’d have figured it for a hazard, given the whole ‘I’m a robot’ thing and all. But no, I can just splish-splash through. Don’t mind if I do, I guess.

I traverse two screens worth of brown blocks, water, monsters, and a bridge, to end up in a room with a big computer terminal. Hey, it’s a backup power generator. ‘DO YOU WANT TO TURN THE POWER BACK ONLINE’? Yeah, actually, I’d love to. Wow, I can’t believe what a smooth mission this has ended up bei- 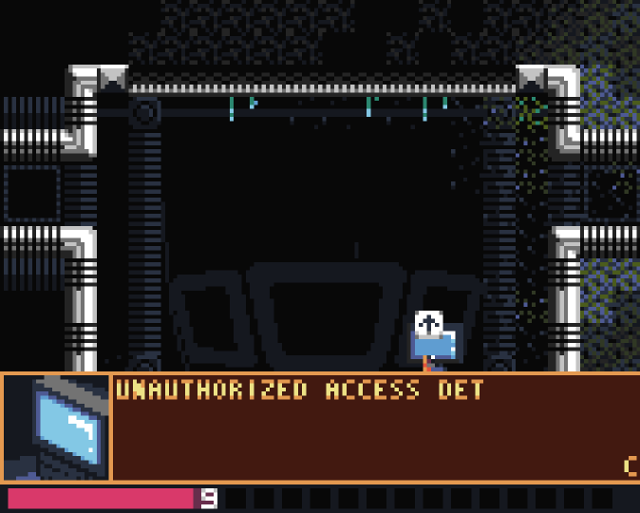 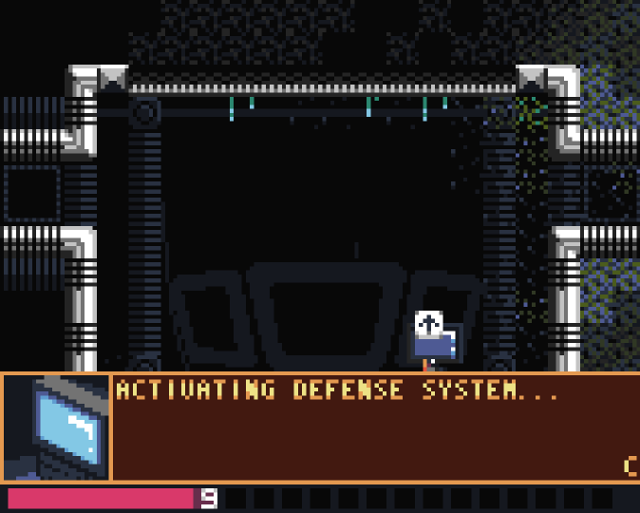 Suddenly, a giant defense robot appears! This Class C Guardian is apparently the ‘boss’ of this power system! And I have to fight it! If only there was a name for this particular gameplay convention! 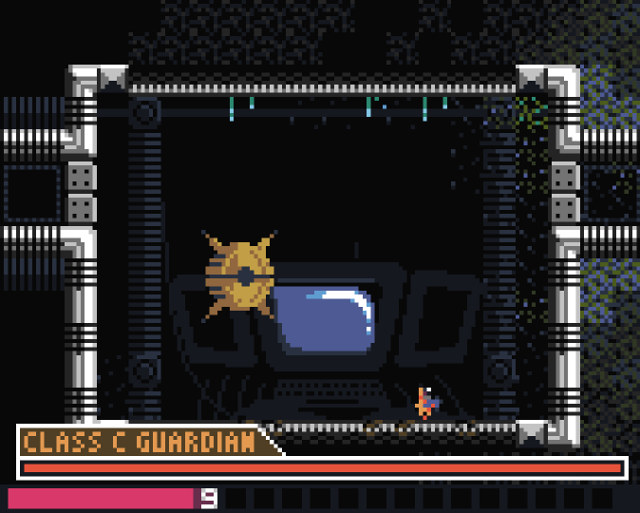 I don’t know why this robot looks like a spiky space acorn either, just roll with it.

I fight the Guardian, which flies around the room shooting pink bullets and doing all sorts of weird robot attacks. We trade hits, but its capacity to dodge isn’t quite mine; at the end of its health bar it falls to the ground and explodes, leaving naught but dust.

The doors to the room I’m in open — I didn’t even notice they’d closed — and a blocky stair appears to the left door. Back whence I came. Might as well; this place is apparently more dangerous than we thought, and I wouldn-

As I run back across the bridge, more alarms blare. The station is put into high alert status. Part of that means ‘sealing the AI mainframe and the surrounding area’. Which apparently includes retracting the bridge to the computer room I was just in. 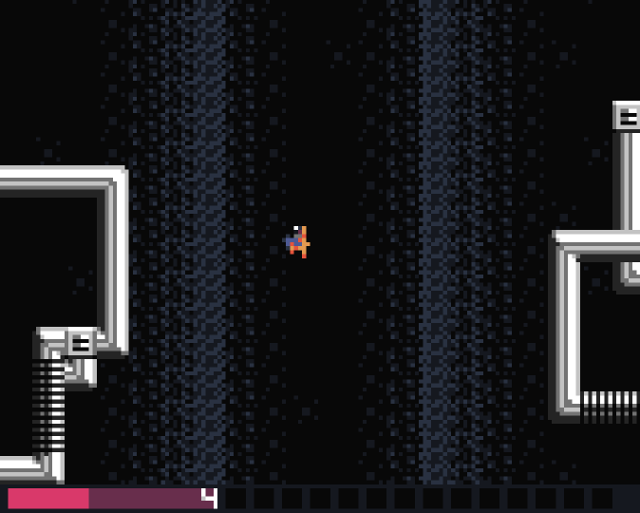 No comical whistling falling sound was provided, but readers are encouraged to substitute their own.

And just like that, I’m stuck in the bowels of a hostile, decaying space station. Increasingly garbled messages from command confirm what I already suspect: There’s nothing outside forces can do for me, in the sense of helping directly nor assisting. I’m gonna have to get out of this on my own. 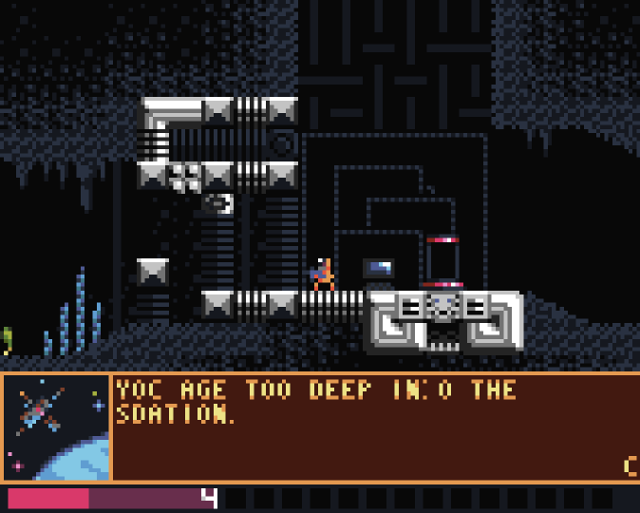 ‘Dear diary: Turns out that fortune teller was right after all.’

The situation isn’t all bad: The red-lined tube I landed next to turns out to be a Save Station, with the added bonus of restoring my health. And…

…Okay, no, it is actually bad. That’s the only point of light so far. I’m still stuck in a hostile, decaying space station, with no idea where to go or what to do in order to get out. I’m one solitary robot with one solitary laser pistol, and arrayed against me is what could very well be an eternity of unexplored corridors, devious traps, horrible creatures, and security systems gone haywire. 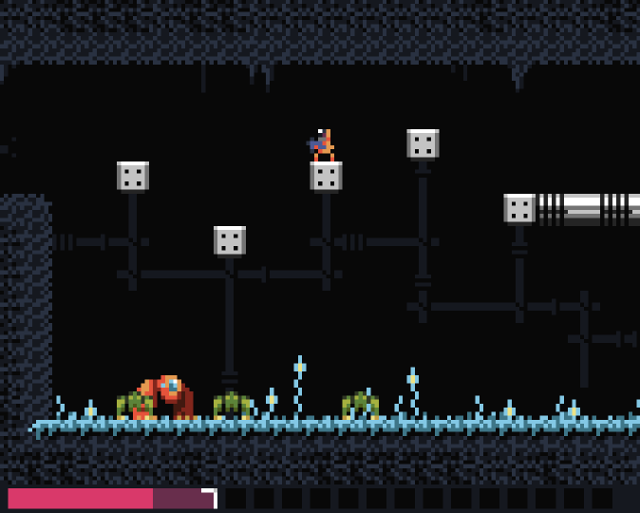 Yup, would you look at that.

I couldn’t have asked for a better video game setup than this, honestly. It’s a magical world, Hobbes, ol’ buddy. Let’s go exploring.