You know how different games represent or embody their essential themes in different ways? Some themes come across in gameplay, some in aesthetic, or narrative, or player choice, and some don’t actually come across at. I bring this up because Tribute Games‘ Flinthook, which as far as I can tell is a game about a rope-dashing pirate ghost, very suddenly appeared in my social media awareness: One day it didn’t really exist, the next, it was practically everywhere. Now, I realize this mostly says something about the shut-eyed way I navigate game news. But all the same, it’s amusing that Flinthook essentially hookshot its way into my awareness, making it the first game I know of that represents its essential themes in the layout of its marketing campaign.

Very first impression of Flinthook: It knows how to wow. Flinthook starts with a flashy, fancy, energetic animated opening, alternating cool black-and-pink minimalist graphics with shots of an adventure cartoon that honestly wouldn’t be out of place on prime time. It also runs like a minute, so I won’t do a blow-by-blow here, but the essentials as I get them are: A planet with a lighthouse, which explodes. A ghost that’s obsessed with an anchor. A man grabs the anchor and is possessed by the ghost, forming… pirate ghost anchorman! Then there’s a whole sequence of PGAM, or let’s just cheat and call them Flinthook, fighting other pirate monsters with guns, bombs, and cunning rope-dashing. There’s also some stuff about bottled ghosts, haunted compasses, and a multi-eyed tentacle horror beast, but I have to leave something to your imagination. 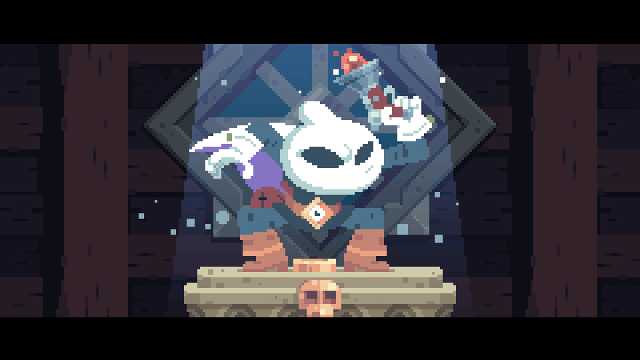 Look at this dapper ghost, and look at this cute art style! I love how colourful it is.

The soundtrack is also really good so far. I often present myself as The Guy What Doesn’t Care About Music Much (though at this point I might be moving into The Guy What Talks About Being The Guy What Doesn’t Care, etc etc), but Flinthook‘s intro and menu beat grabs me immediately. They’re both extensions of the same up-tempo theme, a rushing tune that makes me want to get in there and shoot some pirates. I really hope that’s what this game is going to be about, soon, or all that build-up will have been for nothing.

Options-wise, what I’m looking at is simplicity itself: Music volume, FX volume, ‘window mode’, large range of languages, and a control view. It’s on the sparse end of feature complete, but then I have to wonder how much a game with Flinthook‘s graphic style benefits from advanced visual options. No subtitles, but then maybe there’s no spoken dialogue. The only thing I’m really not sure about is whether or not controls can be rebound; I think not, and while I know lots of games leave that functionality out, I miss it every time. But alas. We’ll see whether or not that becomes an issue later down the line.

And just like that, it’s time to start adventuring. 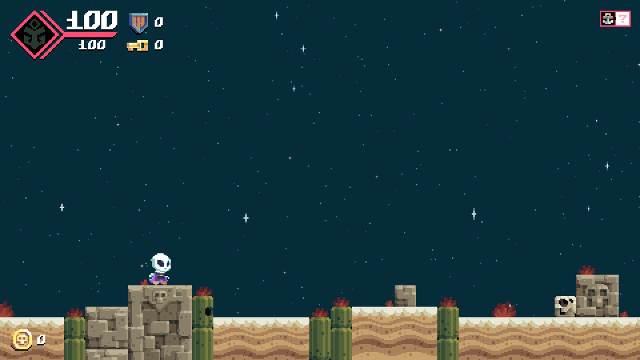 Do you feel adventurous yet?

Desert. Why’d it have to be desert? I have nothing against deserts, save my personal agoraphobia. I just wonder why we’re here.

I stand still for a while, waiting for Flinthook to tell me how to move. Nothing is forthcoming. Okay, so it’s gonna be this kind of tutorial, then. I start hammering the buttons. Left analogue stick moves, as expected. A jumps. No double jump. B and X don’t seem to do anything right now. Y does… something, I just have no idea what. Whenever I push the button a big crossbones appears in the top left corner, near the UI segment that holds what I assume to be a life meter, ‘shields’, and ‘keys’. 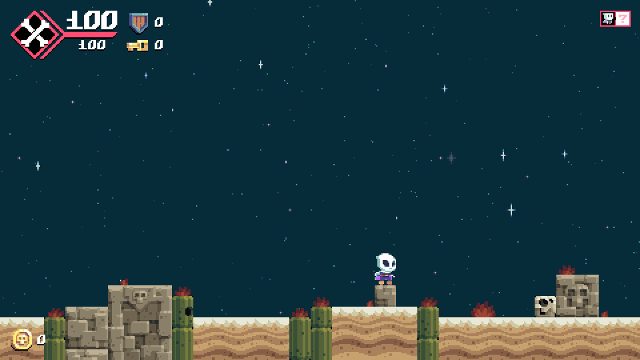 Meanwhile, in the top right, a cute chibi ghost hangs out near a square question.

Walking to the right, I eventually chance on a shrine of some sort. On it floats an anchor-shaped grappling hook of some sort. ‘Quickhook’, says Flinthook, ‘press B to pick up’. Don’t mind if I do. Afterward, an actual controls popup teaches me that I can use the right trigger to fire a cool grappling hook in the direction I’m aiming. 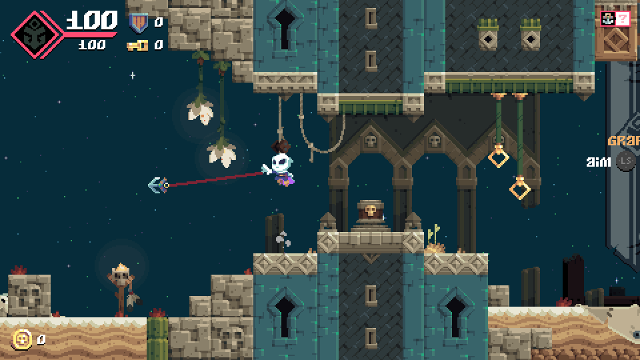 My night just started looking up.

I’m immediately in two minds about this. On the one hand, this is very cool. The grappling hook makes a very satisfying noise when it connects to one of the half-dozen hanging diamonds scattered around the place, and the zipping-around that follows feels quick and responsive. So far, so good, and I can easily envision the high-octane potential of a game built around this central mechanic.

If you said ‘also the left analogue stick, making it so that you can only grapple in the exact direction you’re currently moving’, then congratulations! Go apply to Tribute Games sometime. You’ve already got their mindset down. 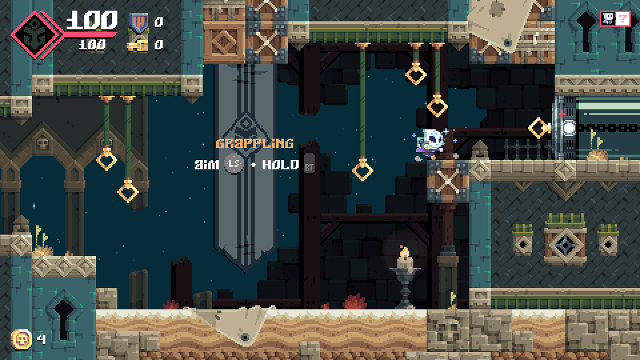 I try to wrap my head around this control scheme for a few minutes, but it doesn’t quite take. What’s particularly confusing is that the mouse-and-keyboard controls, which I can switch to at any time, do totally work as expected: Move with WASD, move mouse to aim, press buttons to fire. This immediately feels so much more natural. I decide to stick with the controller for now, because from experience I know I tend to prefer games like these with a controller. If it’d been right stick to aim… But fine, this is what it is. We’ll see if I can keep this up.

I finally pick up that I have to hook into a giant tube on the side of the level. My little ghost character is sucked into it, and spat out one room to the right. 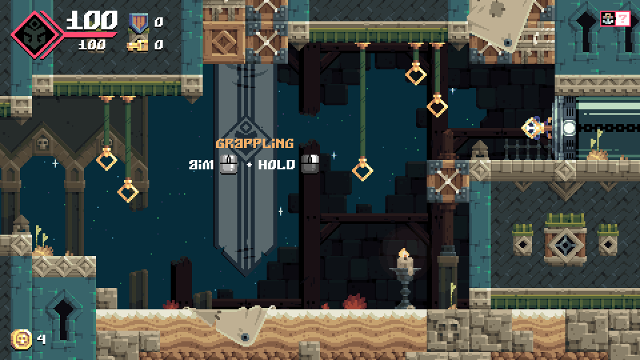 When I said ‘take the tube to work’…

I get some more opportunity to practice movement and basic platforming in the following two rooms, which I pick up quickly enough — except the bloody hook aiming. Then, in the fourth room, another shrine gives me a… ‘blasma pistol’, which, sure. Fine. There’s also an angry pirate in the room with a pistol of their own, and both the exit tubes are locked, so I guess I can already see the shape of what’s about to happen. 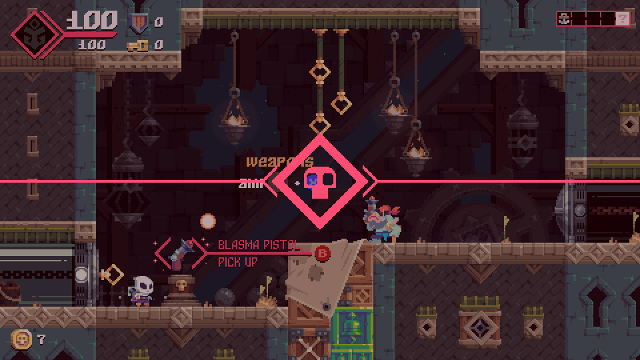 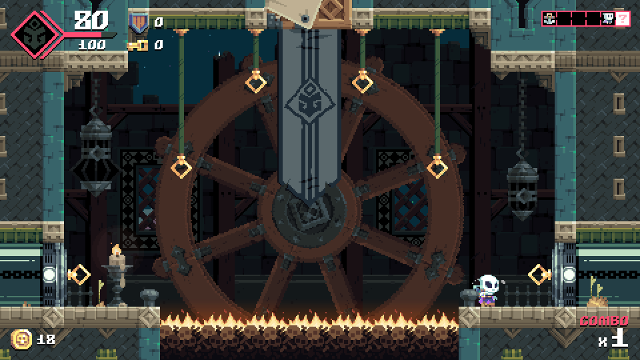 Anyway, then I pass the room of burning skulls and a giant steering wheel — You know, pretty standard, feels like every game has one of those these days.

Ah, but we’re not even done with the toys yet! In a room with strange wiggly purple barriers, I grab a ‘chrono belt’, which may or may not just be a watch. The barriers are impassible, lil’ Flinthook simply bounces off them — in a literal sense. But I can now hold down LT to briefly slow down time. Which gives me more chance to react and be cool, but which also disables the barriers. 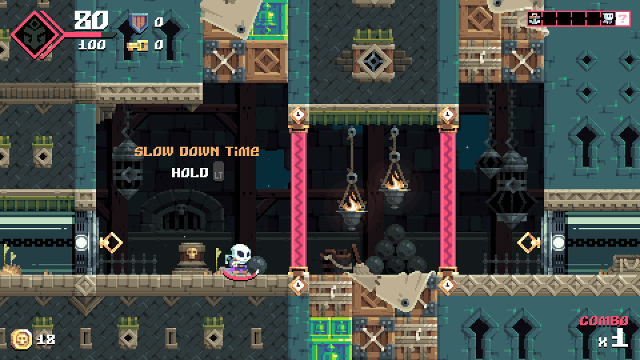 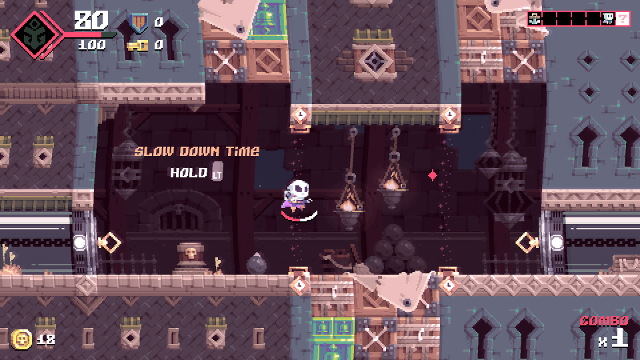 I hook around, I wall-jump, I learn how to collect and subsequently throw big barrel bombs onto groups of surly pirates. And I collect coins. So many coins, it’s a veritable payday. I learn about green emerald bells, which when rung shift some blocks into and some blocks out of existence. It’s a good day for learning all around.

And finally, at the end of the race, I gain two final prizes. First, there’s this thing: 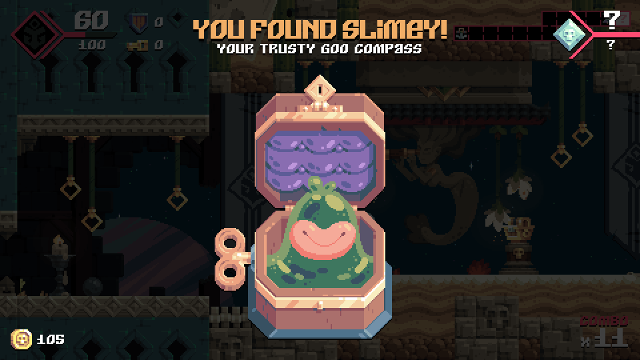 This little guy is Slimey, my goo compass. I know, I know, just roll with it. If I ‘feed’ Slimey some ‘ghost gems’, they’ll point me to my next BOUNTY in no time. Wait, what bounty? It turns out that that’s the second thing I earn: There’s a bounty on the diminutive head of Bad Billy Bullseye, and it’s up to… Well, anyone with a death wish and a working pistol, but very specifically me, to go collect. 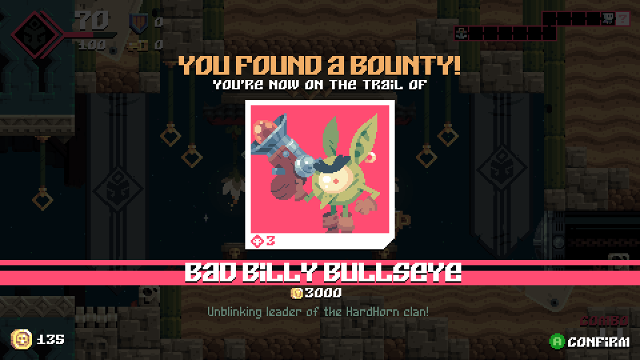 Look at this mean-looking bastard. Look at him, as he looks at you. *Unblinking*. 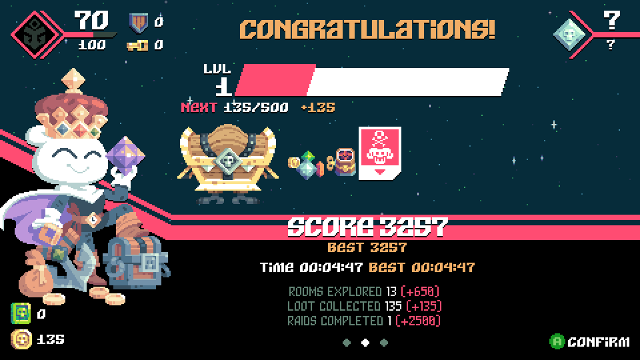 I have now won, and am the best at tutorials.

So how do I get to Bad Billy Bullseye? Beating the tutorial drops me into the main game menu, which… has a lot of options marked ???, and one option marked Play. I can select a target here. My only target is Billy. Should be easy enough, right…

…Except it’s not. I know I want to get Billy, but I don’t know how to find Billy. That’s what the slime compass is for. I have to collect enough Ghost Gems to pinpoint Billy’s location before I can bring that scumbag in. Problem is, those Ghost Gems aren’t just on display in the corner shop: No, they’re held in the various ships of Billy’s pirate armada. Which means that if I want to get to the big boss man… 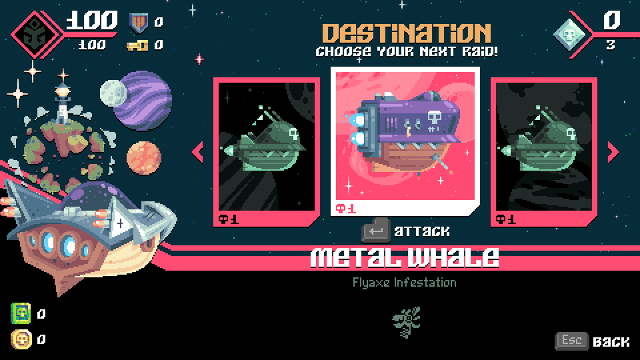 Three ships. Two of them look different, all of them have a skull rating of one. Each has a different descriptor at the bottom, though. This one has a ‘snack pantry’. That one has a ‘librarius’. The third one has a ‘flyaxe infestation’. I don’t really know what any of these mean, yet, but I am starting to see the shape of this; and if I’m right, this could end up being a lot of fun. For now, I’ll go say hi to the flyaxe ship: Not because I have to, but because I can. 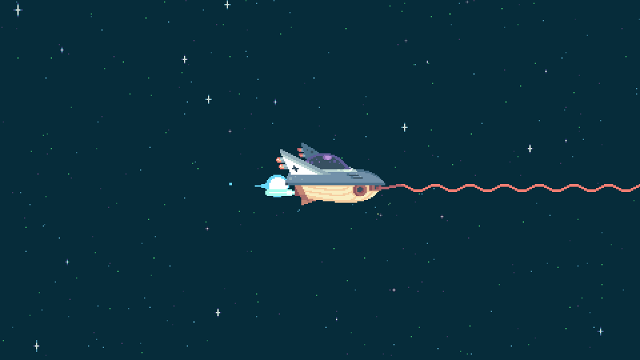 Let’s see if Bad Billy Bullseye is as easy to take down as his nickname suggests.