I want to tell you about Rakuen.

I started following Laura Shihigara on Twitter after her phenomenal contribution to To The Moon, which to this day is still the only piece of video game music I love so much that I have a physical representation of it in my home. Given how much I dug To The Moon in general, you won’t be surprised that I was interested in her involvement in/spearheading of Rakuen, a game that from the little news I elected to follow of it seemed very much to be what I promise I’ll never call it again, a To The Moon-like. Same concept, but different context, setting, characters, and way the player inevitably gets their heart broken, that’s what I figured. I was particularly drawn to the recurring visual of the boy in the origami hat, since that’s one of the few origami pieces I can sort-of do myself, and the title, Rakuen. If you’d put me on the spot, I’d guess that it’s Japanese for either peaceful or paradise; I know this, of course, because I phonetically memorized the lyrics to the opening song of the Kirby anime. 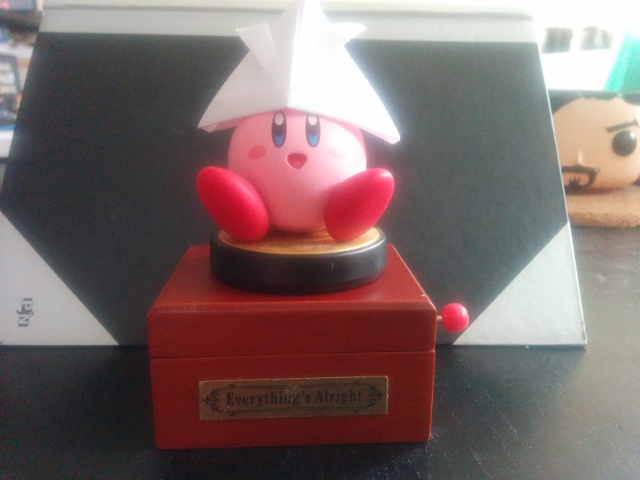 Bringing all of the above together…

Rakuen came out on Steam a little over two weeks ago. I waffled on picking it up for review purposes at first, figuring that I didn’t know how much there’d be to talk about. But I eventually decided ‘you know what, I’ll just play it, it’s bound to be cool, and I’ll see if I get any writing out of it afterwards. So I bought Rakuen, and started playing it, and eventually completed the whole story.

All of this happened yesterday.

Regular readers might remember that I sometimes play fast and loose with the description of my playtimes and -dates, especially if it suits the review story. “I just beat the final boss,” I’ll say at the start of the second page, in actuality having beaten the boss three days ago. I get it, this is my narrative style, I dug this hole for myself. Which is why it’s important for me to reiterate that all of this happened yesterday. I installed Rakuen, and started playing Rakuen, and finished playing Rakuen, all on Sunday March 28th 2017. Yesterday, from the perspective of when this article goes up. Which means that Rakuen gets the unexpected honour of having my fastest-ever review turnaround time: Since I played well into midnight to close out the story, I’ve gone from final play session to written review in less than 24 hours.

And here I was wondering I wasn’t gonna have anything to say.

END_OF_DOCUMENT_TOKEN_TO_BE_REPLACED

I am on holiday. The trip actually only kicked off yesterday, but understandably I’m not exactly able to keep updating and recording videos while I am away. As I have mentioned in the posts for the previous weeks it has taken a fair amount of preparation but at this point, the channel should pretty much just play itself. Videos releasing at midday every day, automatically tweeting out and adding themselves to the appropriate playlists. The marvels of the built-in YouTube scheduling and playlist systems.

This week I finish Ranless Sea and put a pause of Pillars of Ranternity, that means next week you will see some changes to the schedule. In the Monday/Friday slot I will be fighting the alien overlords in The Ransistance (you can sign up to become a soldier here. On Wednesdays I revisit my favourite game from 2015 and play through Massive Chalice for the first time since I wrapped up my Massive Tips series.

END_OF_DOCUMENT_TOKEN_TO_BE_REPLACED

Working with a buffer can be hard but very rewarding. I am currently getting ready for a trip at the end of the month. I won’t be gone for too long, just under 2 weeks, but to do that I need to ensure that I can extend the buffer far enough.

Generally speaking, I do most of my recording on the weekend, but vacations generally take up weekends on both sides of the trip, which means I not only have to cover the period I will be away, but a little longer until I can find more time to record. This means a 2 week trip needs a minimum of a 3-week buffer.

Somewhat unhelpfully, the trip also falls on the changeover points for 2 of my series. At the end of this month Ranless Sea will wrap up and Pillars of Ranternity will be taking a well-deserved break. This means that I need to try to prepare 3 weeks worth of each of the new series, along with prepping the title screen and ideally outros. At least if some of this falls behind I can try to get a little done during the trip.

At the time of posting this may be a little bit late, but one of the new series will be titled The Ransistance and will be an XCOM 2 Let’s Play. If you want to join up please fill out this form. (NB: the only thing you absolutely HAVE to provide is a name, everything else is optional)

END_OF_DOCUMENT_TOKEN_TO_BE_REPLACED

Another relative unknown from the endless depths of my Steam wishlist, Arvi Teikari, Roope Mäkinen, and Joonas Turner‘s Environmental Station Alpha was released a little over two years ago, in a time where the world had yet to turn into a 24/7 Stranger Than Fiction madhouse. I don’t remember how it got on my wishlist, apart from that it ‘seems neat’ from the outset. But it was on Steam Sale a few weeks ago, and so, here we are.

END_OF_DOCUMENT_TOKEN_TO_BE_REPLACED

In terms of viewership the channel has not changed much. I am still seeing very low engagement with my longer running series, Pillars of Ranternity and even Torment: Tides of Ranmenera is barely getting any interest. Worse still I am losing motivation to play Pillars of Eternity and so, in the absence of any written or vocal feedback I have decided to take a break from Pillars. In my recordings I have reached the end of the White March Part 1 and that seems like a suitable stopping point. I will return to it eventually but I think some separation will do me some good.

At this point I think I will start an XCOM2 Let’s Play to replace it. That game stole a week or so from me just after it released and I would like to go back to it now all the DLC is out and the mods are more mature. Let me know if you are interested in being recruited and if you have any mods you would recommend I play.

The backlog itself still in a state of flux, on YouTube I am only solid through to the 18th, but I have raw footage that will see me through to the 26th when Pillars wraps up. In general, 2 weeks feels like a pretty good buffer, but I have a trip coming up at the end of the month. If I don’t get some extra recording done it will be hard to keep up the same consistency of output in June.

END_OF_DOCUMENT_TOKEN_TO_BE_REPLACED

You know how different games represent or embody their essential themes in different ways? Some themes come across in gameplay, some in aesthetic, or narrative, or player choice, and some don’t actually come across at. I bring this up because Tribute Games‘ Flinthook, which as far as I can tell is a game about a rope-dashing pirate ghost, very suddenly appeared in my social media awareness: One day it didn’t really exist, the next, it was practically everywhere. Now, I realize this mostly says something about the shut-eyed way I navigate game news. But all the same, it’s amusing that Flinthook essentially hookshot its way into my awareness, making it the first game I know of that represents its essential themes in the layout of its marketing campaign.

END_OF_DOCUMENT_TOKEN_TO_BE_REPLACED

My buffer is shrinking disconcertingly quickly. I now am covered for daily episodes through to the 15th of May with only a small amount of unedited videos to help extend things. I need to find the motivation to sit and record more. What doesn’t help is the complete lack of feedback on the new schedule. My attempts to get it so far have proven unsuccessful and the only other metrics I have to go on aren’t exactly ideal. Since the release of Torment: Tides of Numenera my view count has dwindled dramatically and many of my new videos are being almost completely ignored. I would love to know why. Are the games just no longer fresh? Am I putting out too many videos? Should I take a break or change the format. I really need some human feedback here, not just numbers without much context.