The daily schedule seems to be working for the moment, how long it lasts will depend on how well I maintain my buffer. Currently, I have videos uploaded and scheduled through to the 11th of May, with weekends covered significantly longer. In fact, one of the major motivations for moving to a daily schedule was to have an outlet for some of the videos I had already recorded but not had a time to release them. I would really appreciate some feedback on this though. Does the new Ranneko Plays schedule work for you? Is it too much? Which is better fewer games with more episodes each week or more games with a greater chance I am playing one you want to know more about?

END_OF_DOCUMENT_TOKEN_TO_BE_REPLACED

So, here’s the thing. The game I want to talk about this week isn’t so much a full game as it is long-awaited DLC. I’m talking (of course) about Specter of Torment, second in a line of three DLC expansions for Yacht Club Games‘ Shovel Knight. There’s a limited audience of interest for this sort of thing: Either you already own Shovel Knight and by extension Specter of Torment and you don’t need any purchase advice, or you don’t own slash haven’t played Shovel Knight yet, in which case a Specter of Torment review is probably of limited value. For this reason, I’m keeping this review a little shorter than usual; it’s definitely only this reason, and nothing to do with the fact that I hecked up my screenshot key bindings during play. I’m sure you guys would be riveted by a series of nigh-identical pictures of me swapping through items, but alas. Better luck next time.

for real, though: Specter of Torment is still worth talking about, if for no other reason than to help you decide if you should actually spend time playing it. 2017 is proving itself to be a ridiculous treasure trove of great games; I can count up to half a dozen amazing releases I haven’t been able to give the time they deserve yet, and the number’s only that low because I don’t own all consoles yet. I’m in the stage of my life where free time has supplanted money as the prime limiting factor for which games I can play, which means I have to ask myself the same question on every new release I get my hands on: Is this actually worth investing some of my precious time of life?

(Game source: Bought it myself, a long long time ago..)

END_OF_DOCUMENT_TOKEN_TO_BE_REPLACED

It’s been a while since I posted, but that doesn’t mean I haven’t been busy. In fact, right now I have new videos on my channel every single day. Unfortunately, it has proven… difficult to post regularly on the site because my update system wasn’t really intended to cope with this kind of volume. Plus some of my regular series have gone on long enough that it is difficult to avoid repeating myself. The plan from this point is to weekly summary posts so regular readers can keep up with at least the broad strokes.

END_OF_DOCUMENT_TOKEN_TO_BE_REPLACED

Hey everyone, it’s Jarenth. Hope you all had a happy non-denominational springtime-related holiday weekend? May your days have been filled with personally satisfying degrees of casual leisure, spiritual significance, and/or chocolate eggs.

I chose to spend my limited free time this week hanging out friends, family, and babies in lieu of playing indie games, so I bet you know where this announcement is heading. Regular service should resume next week.

Serious question to all y’all: How do you folks keep track of interesting games? With 2017 being some sort of Good Games Singularity, it feels like a necessary luxury to keep track of games you want to at some point, but just not right now. I used to have a Steam Wishlist for that sort of thing, but the combination of a terrible user interface and my own ever-expanding interests means that that option has been on a slow Akira reenactment ever since 2014. I sometimes keep Steam store tabs open in Google Chrome, but that’s sort of crumbling under the same problem: I currently have 125 tabs open over six different windows, and none of them are tabs I feel I can ever close. So, that leaves me… what? Calendar reminders? Post-its? Writing on my whiteboard?

I’ll tell you what apparently does work. I have two monitors, with the right one serving as my ‘main desktop’; as you’d probably imagine, that place is a sprawling wasteland of a hundred icons. But the left desktop is still relatively pristine. So I’ve taken to a measure so stupid that I can’t believe I ever thought it would work: Writing down game names as file names for empty text files, and then dropping those onto the desktop. 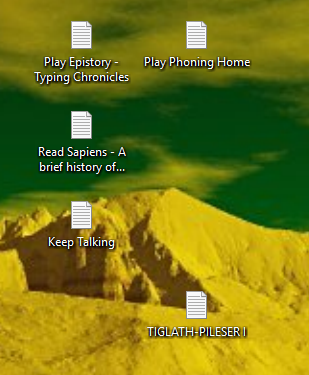 No, seriously. This is not a goof.

Right now I’m getting ready to play Fishing Cactus‘ Epistory – Typing Chronicles, which I just bought and downloaded after seeing my desktop reminder. I hate that this goddamn system apparently works (for now), but I’ll take what I can get.

END_OF_DOCUMENT_TOKEN_TO_BE_REPLACED

Long-term readers might remember that in the past I’ve been a very vocal fan of Gaslamp Games‘s Dungeons of Dredmor. Still a fan, in fact, I’m just less vocal about it. I didn’t just write a praise-filled review on the still-defunct Blue Screen of Awesome, but later followed that up with a four-page in-depth screed about all the reasons I loved that game. Ninjustin and I even had tentative plans to use Dungeons of Dredmor as the basis for a charity donation drive event. Donations for Dredmor, we’d call it. Hell, that might still pan out someday — TM, TM, TM, and all that.

So when Gaslamp Games announced their second game, Clockwork Empires, a steampunk- and Chthonic-inspired colony builder, I… I generally try to not get swept up in hype, ever since Oblivion did what Oblivion does. But I was more invested in Clockwork Empires than I usually am in games in development. I really kept up with the dev blogs for a while. I checked the Steam page for news and release dates. I even found myself tentatively planning what I’d do with Clockwork Empires when it came out: Review it for Indie Wonderland, or maybe use it as the basis for another Let’s Play? The sky was the limit in those halcyon days. I didn’t actually engage with the game when it hit Early Access, because I’ve got weird documented hangups about Early Access, but I waited.

And then Clockwork Empires actually came out. I’ll give you a moment to search the site for how much I’ve written about it since release. I’ll give you another moment to figure out where out site’s search functionality is hiding. A third, final moment is reserved for the realization that I just deliberately asked you to waste your time; yeah, it’s nothing. I got Clockwork Empires on release, and I even played it a bunch, and then I never mentioned it on the site or wrote anything about.

It turns out that Clockwork Empires just kind of sucks.

Or at least, it did suck. It’s been months since I played it; my last screenshot is dated November 20th, 2016. Might be that it got real good after I stopped playing. Might not be. A quick browse through the Steam reviews seems to reveal that Gaslamp Games stopped all work on Clockwork Empires in December of that year, so I think my take is probably still accurate.

Truth be told, I didn’t write about Clockwork Empires back when I played because I was disappointed. That’s not a good reason to not write; in fact, if anything, a disappointing game should get more press. But for the longest time, I just didn’t want to. I wanted this game to be good, and it wasn’t, and then I just wanted to not think about it again. But I did keep all my screenshots from that play time. I don’t know what’s driving me to write about it right now; maybe I just want to get some lingering disappointment off my chest. Maybe I think a late warning is better than no warning. Maybe there are lessons to be learned from the ways Clockwork Empires disappointed. Or maybe the triple-A game releases in 2017 are off the chain and I’m lagging behind on my indie game coverage like some kind of rank amateur. You choose.

(Spoiler levels: Narrative, not really a factor as far as I know. Mechanical, high-ish.)

(Game source: Bought it myself)