Hey readers. It’s been a while since I did one of these triple features. I usually do these either when I have a backlog of smaller games that I don’t think have enough meat for a full review, or when I didn’t get far enough into a larger game the previous week. Those of you who’ve seen my Twitter account devolve into non-stop Breath of the Wild screenshots may be able to guess the cause this time.

Not to say that the games I want to talk about this week aren’t interesting, though; there’s a reason I had each of them in my backlog. I’ve got a diverse set for you this week: one game about morphing, one game about diving, and one game about bullying. And jumping. And rolling. And delivering pizza. And piquing your interest enough to keep reading, hopefully.

I know about Disparity Games‘s Ninja Pizza Girl thanks to the site’s resident video game ninja, Ninjustin, who told me about this cute game he’d played about ninjas, pizza delivery, and emotional investment. His pitch was enough to get me curious, so I dove into a few weeks ago, and — yeah, I can sort of see the appeal.

Mechanically, Ninja Pizza Girl is probably easiest explained as sort of an indie 2D reimagining of Mirror’s Edge. Except it’s not first-person, and there are no guns involved, and the cyberpunk city you’re running around in is a lot less sparkly white and clean and a lot more grimy and run-down. So not really a great comparison at all, but listen: hush. 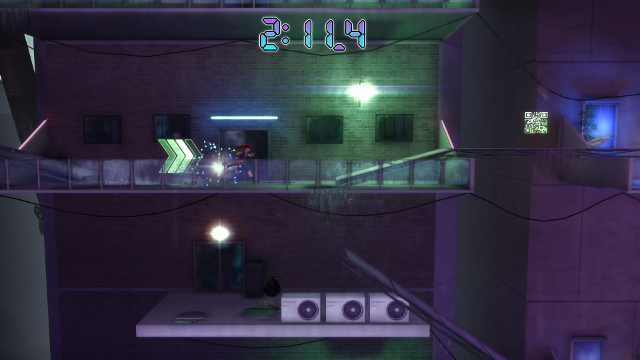 I’d come up with a better simile, but time is of the essence.

The basic Ninja Pizza Girl gameplay loop is this: You’re at point A. You need to get to point B. Connecting the two is a semi-open section of world, littered with jumps, obstacles, enemies, but also collectible bonuses. There’s a time limit, because you’re delivering pizza and pizza gets cold, but otherwise you’re fairly free to run through the level according to your own insights. 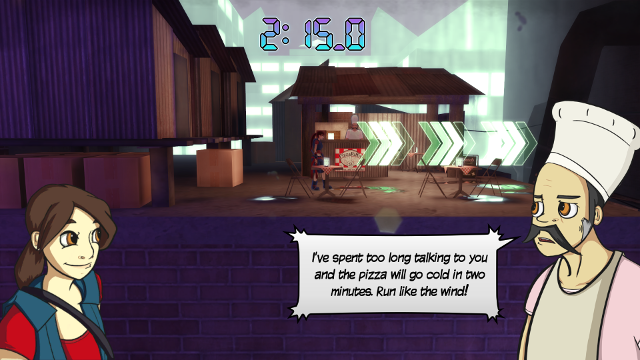 In practice, you’ll find a variety of ‘paths’ through each level, usually by way of different vertical elevations you can run. If you manage to make the tricky jump or spot the opportunity to swing on a pole, you can stay up higher, where the routes are often shorter, the rewards more plentiful, and the scenery fancy and open. If you don’t make the jump, you fall, and (assuming you remember to roll into it) get stuck on the lower tiers for a while. In my experience the ‘backup’ routes do tend to be easier to run, which makes it almost a sort of adaptive difficulty.

Initially, the name of the game in each level is just to make it to the exit (in most cases), but I hope you can already see how the real challenge is speed and time. The better you play, by finding the good paths and deftly dodging obstacles and enemies, the better your time rank. It’s a challenge that tests your reflexes, but also rewards learning the level layout and planning optimal approaches. There’s even a bonus in it if you manage to keep moving for long enough, where the game’s muted visuals and relaxed audio get swept up in rainbow lights and pumping electro dubstep — I’m pretty sure that’s called ‘flow mode’, and if it isn’t, it should be. 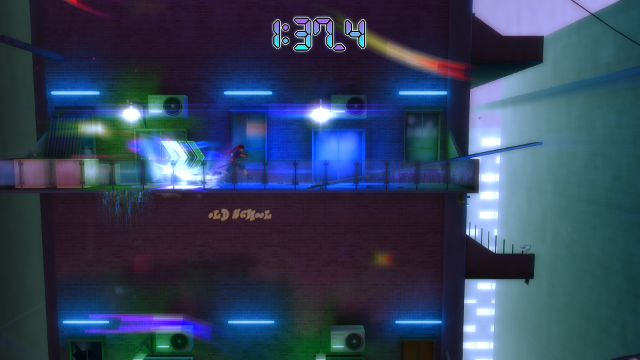 Kinda took me by surprise the first time it happened, I won’t mind telling you.

Sound and visuals are actually a big part of the Ninja Pizza Girl experience. Gemma, your pizza runner du jour, doesn’t have a health bar or something similar, but her ability to run good runs is influenced by her mood — every time she falls, or misses a jump, or gets garbage thrown at her, she feels a little less good about herself, and the game gets a little more grey and a little less festive. This is actually a pretty sneaking process; I didn’t even consciously notice that it was happening until the game outright told me. The effect actually persists between runs, because that’s how ‘feeling shitty about yourself’ does tend to work. 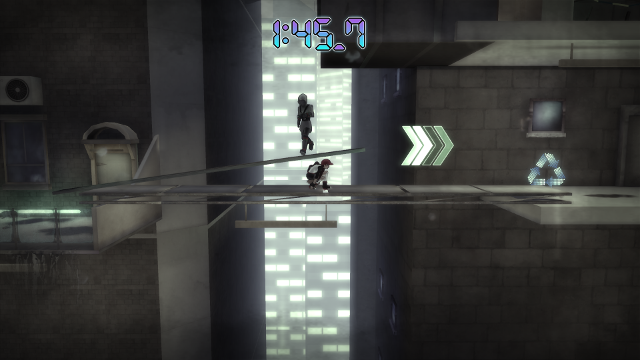 “Hmm. I seem to remember this game being less *monochromatic*.” 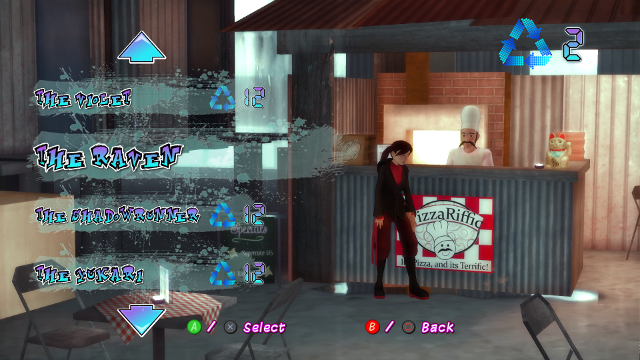 Also, like in real life, one good way of getting some colour back into your perception is by treating yourself to fancy new clothes.

This also ties into Ninja Pizza Girl‘s storytelling, and it’s this that lifts the game from ‘fairly straightforward speedrunning platformer’ to ‘actually really pretty neat’. Without going too in-depth, the story follows the aforementioned Gemma as she delivers pizzas for her father’s one-man pizza shack. Gemma craves acceptance from the other pizza delivery ninjas, who all work for larger chains, but all they do is belittle, insult, and outright attack her. If that sounds gloomy and kind of downbeat, that’s because it is: Ninja Pizza Girl is at its core a story about the deleterious effects of sustained bullying, and it brings that across really well. What makes it even more effective is that this main story is interwoven with Gemma’s actual pizza delivery adventures, which are filled with a bright and diverse cast of people with an equally diverse cast of problems — that Gemma is more than happy to help out with. Two mutually attracted people both daren’t make the first step, but maybe pizza can help convey their emotions? A trans woman is upset at her lack of feminine-coded clothes, so Gemma tries to cheer her up — “You’re a woman no matter what clothes you wear.” Gemma uses her limited free time between runs to make a cool pizza running outfit for a little girl that really looks up to her, one that’s even better than her own. An early set of levels even sees Gemma acknowledge that she herself was a bully in the past, on an axis she didn’t recognize, and try to make honest amends.

Have you ever had this experience? That it’s really easy to identify and fix the problems in other peoples’ lives, but that your own (similar) problems seem insurmountable? Ninja Pizza Girl girl understands, and the writing delivers a few solid punches as Gemma keeps trying to earn the approval of the other ninjas — for reasons apparent to no-one but herself. 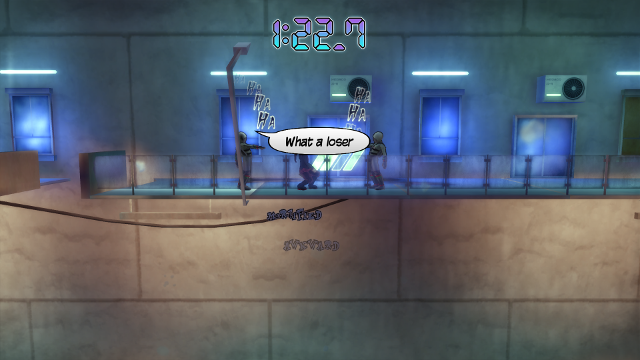 The pizza ninjas are obstacles on your runs and all they do is try to make you fall, then point and laugh.

I won’t claim that Ninja Pizza Girl is a particularly amazing game: the production values are obviously a little low, the levels can bleed together after a while, and on more than one occasion I’ve had to restart runs because a jump got caught on invisible pixels or an input just didn’t register correctly. But the writing is really good, the story is short enough to get through inside a few hours, the levels are both expansively cool and short enough to not outstay their welcome, and for my complaints about the controls and the aesthetic, I do really enjoy the sense of speed, flow, and forward momentum that the game conveys at its best moments. If you’re interested in a heartfelt story about uncertainty and vulnerability, if you enjoy speed-driven platforming, or if you’re looking for a cool leaderboard game to compete at with your friends, Ninja Pizza Girl might be worth a look. 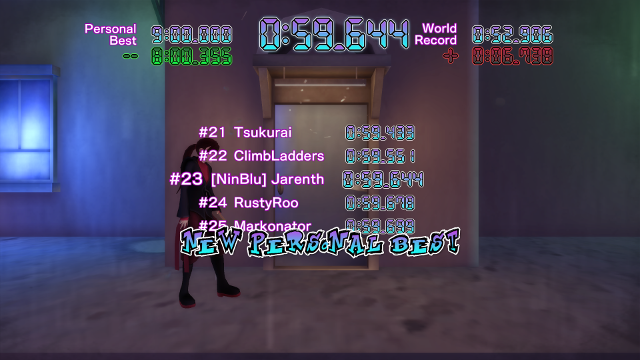 And if you think you can beat my times, *come at me*.