Heya, faithful Indie Wonderland readers. This week I’m reviewing a game called Sproggiwood, brainchild of Freehold Games. I am doing this because the game is called Sproggiwood. That’s my entire reason, and it’s a good one.

You might try to argue that I could be interested in Sproggiwood because its Steam page promises a neat combination of roguelike dungeon combat and persistent upgrading, the latter of which is incarnated in a cute voxel-art village that supposedly grows as you adventure. These are good points all, but I’m going to counter by saying Sproggiwood. Guys, it’s a really good work. Say it out loud. Sproggiwood. Really let it roll off the tongue. Sproggiwood. The other stuff helps too, I’m not gonna lie, but if this game’d been called something like The Adventures Of Bob, I probably wouldn’t have…

Actually, that’s a lie, I would 100% play The Adventures Of Bob and everyone here knows that I would. But if that game even exist, and as I write I find myself hoping that it does, it’ll have to wait until this. This week’s Indie Wonderland is 100% Sproggiwood, 100% of the time.

This title screen’s giving me what I need. Cute art, blue and yellow colour contrast, Sproggiwood. 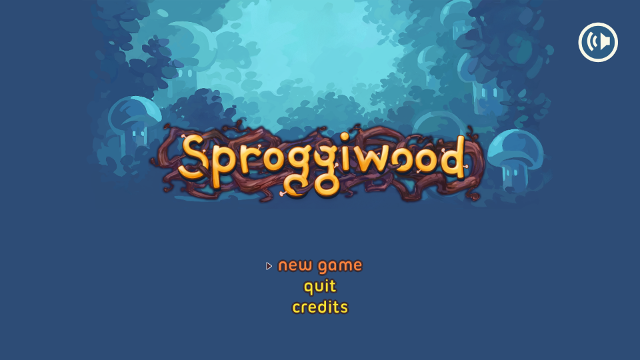 I’m basking in it, can you tell?

Actually, this title screen isn’t giving me everything I need. Where are my options? I need those to live! Options and settings and like the vitamins and minerals in a well-balanced diet. You think you can go without, and you might not even notice that your intake is lacking — here, there’s an audio thing in the top right corner, that’s like eating healthy, right? Until suddenly one day BAM, instant death. Happened to a guy I know, true story: He always played video games with subpar options and now he’s not here anymore. Rest in piece, Jimmy ActualPerson. If only you’d had more Depth Of Field.

Sadly, my madman-rambling doesn’t magically conjure a settings tab into existence. I’ll have to make do with a limited difficulty selector, which is lean fare indeed. 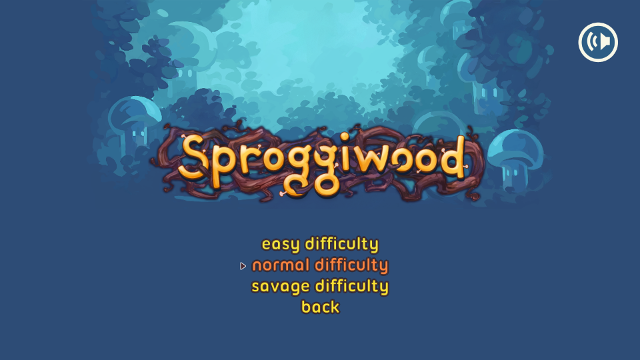 Choice thus made, I move on to…

Red curtains are drawn, and Sproggiwood starts telling me a story. “There once was an island called Clog…” Hah, I think to myself, that sounds like it could be the opening to a limerick. It has the cadence down. Then Sproggiwood out-clever’d me by doing exactly what I expected.

I move to a black backdrop and now there’s a sheep talking. 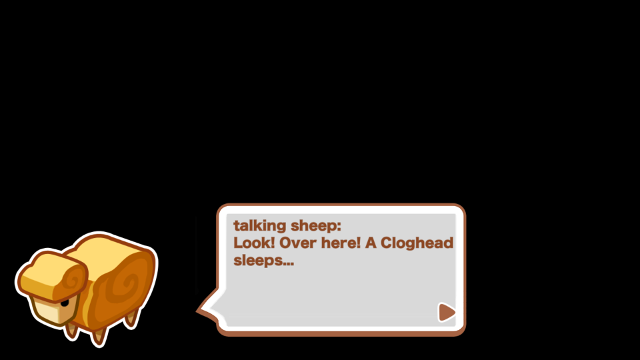 Helpfully labeled, so as to not confuse me. 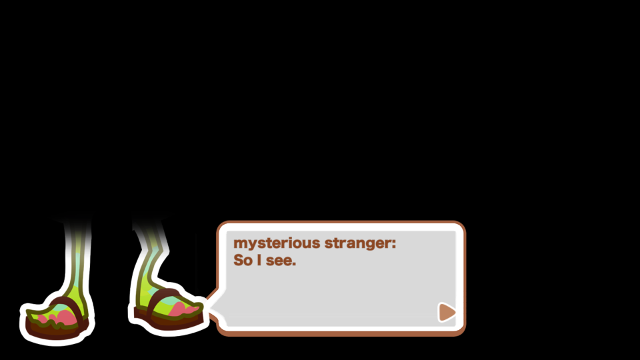 I know the feet aren’t doing the talking because otherwise they’d be labeled as such.

The sheep and the feet babble cryptically about work that is done, and granted powers, and something called ‘Raako’. Then the sheep shoos off the feet, lest ‘the Cloghead’ sees them ‘when they wake up’.

Then I wake up! 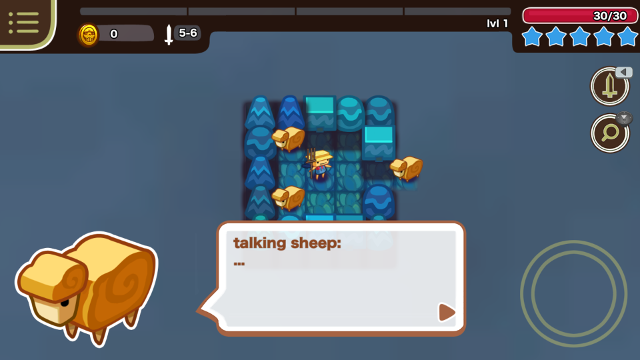 That’s me, in the middle. The farmer with the square head and the rad dungarees. I’m apparently a Cloghead, whatever *that* means.

I don’t have a lot of time to take in my surroundings, or my UI, or this world’s weird blue trees, because the pushy talking sheep immediately starts living up to its name — i.e. being talkative, and pushy. It calls me a ‘Cloghead’, which is weird, because as far as I can tell this game isn’t called ‘Cloggiwood’. But whatever. The sheep mocks my surprise at meeting a talking sheep, and invites me to take a ‘closer look’. 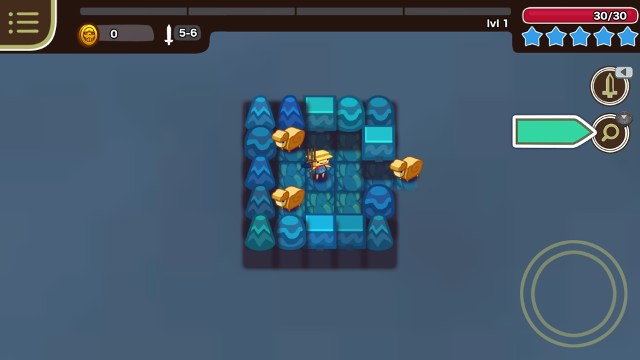 I stand in total silence, trying to figure out what this might mean. And also because I don’t know how to move or talk.

There are two buttons on the right side of the screen, marked with a sword and a magnifying glass, as well as with the symbols for ‘Xbox Controller Back Button’ and ‘Xbox Controller Push Down An Analog Stick’. By clicking the stick and then nudging the left analogue stick, I can get a controller indicator all the way over to the sheep, moving in small hops that I assume correspond to the square tiles on the floor. Or, and this is a little confusing, I can also move the cursor with the mouse, click on the magnifying glass button, then click on the sheep. These seem like odd complementary control schemes, but I guess I do prefer having them both over forcing one or the other. Either way, I eventually manage to take a closer look at the talking sheep. 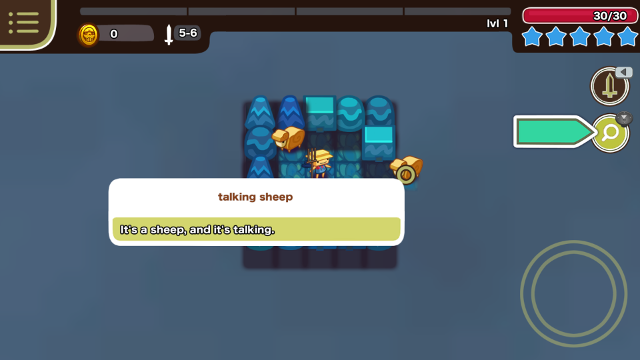 I don’t know what was expecting.

Satisfied, the sheep urges me to follow. I can move either by clicking a giant oversized arrow in the bottom right corner, or by nudging the left analog stick. So far the control schemes are 1 for 1: mouse rules in the looking department, controller is better at getting places. It’s either a team-up for the ages, or I’ll end up hating 50% of this game.

I follow the sheep rightward. It moves past a yellow cube with eyes, which then slides into my way. With no other option, I move in the space right in front of it, and the cube violently lashes out. 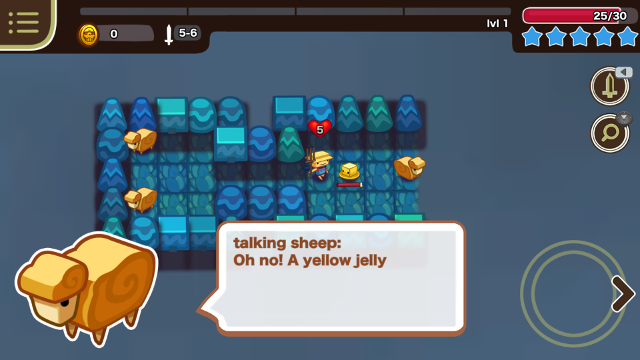 At least, I assume. Could be it’s trying to give me kisses instead. Hearts as a damage signifier are open to interpretation.

The sheep is pessimistic about this development. 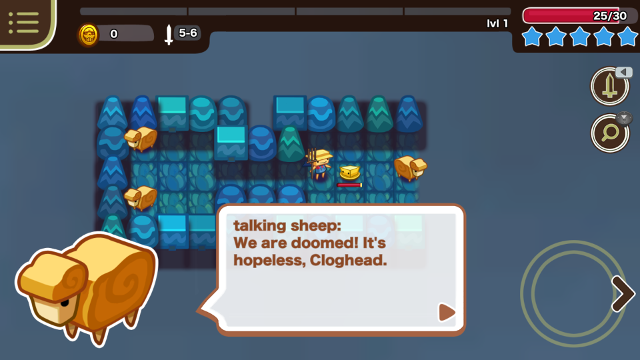 “Let us lie down and accept our fates.” 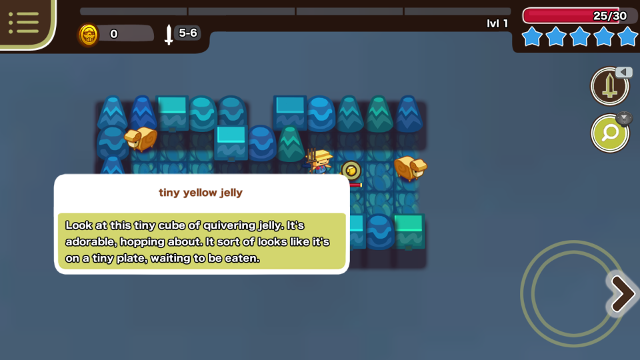 Looks can be deceiving.

Here’s the thing though: I’m a farmer with nice dungarees, a big pitchfork, and nothing to lose, and crucially the only action I’m allowed to take is to keep walking rightward. So I do, and my little Cloghead takes the initiative by goring the jelly on their pitchfork, sending globs of yellow flying all over the square. The sheep, for their part, is impressed.

We move five squares and run into a second jelly. This one is blue, and bigger, but that doesn’t stop me from poking it to bits. Doing so apparently Levels Me Up, if the big ‘RB: Level Up’ indicator on my screen is anything to go by. I’m presented with four fancy powers, three of which I can choose to unlock. 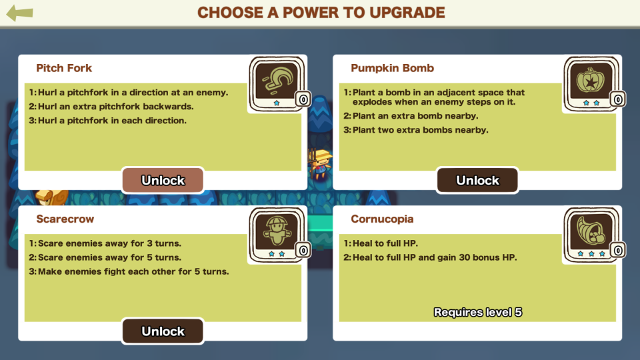 They’re all appropriately farmer-themed, which I appreciate, I have to say.

Oh, and what’s this a little further down the path? It’s a fancy golden treasure chest! Containing nothing less than a magical shovel of fire! 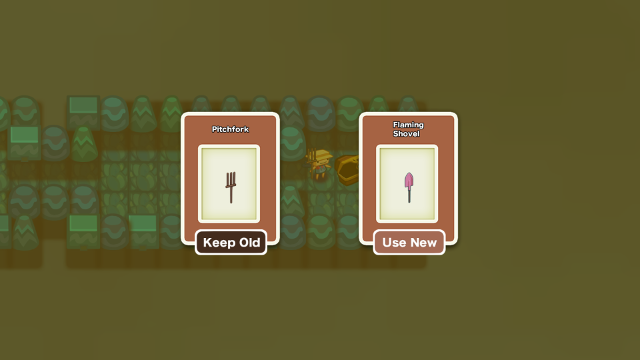 Appropriate pink, and now I’m wondering if that’s what they were going for or not.

We move through another narrow canopy of trees, and I see a second yellow jelly wait beyond. I resign myself to a jelly bite, but the sheep has a different plan this time: it tells me I can wait for one turn, giving the jelly a chance to move closer to me — their natural bloodlust overrides any level of counter-planning. I can skip turns with the left trigger. And sure enough, the jelly surges up to meet me, but — having used its entire turn to reach me — can’t actually attack yet. 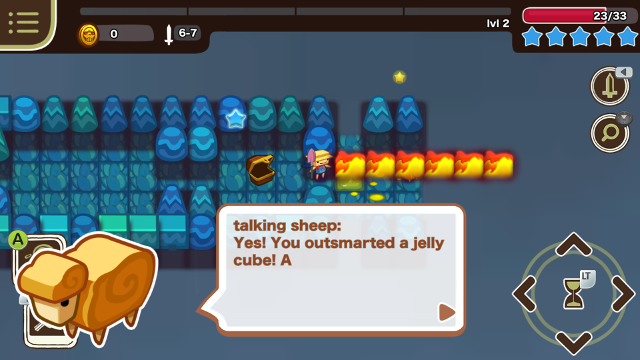 So it turns out this magical fire shovel is actually *really fucking rad*.

We finally reach the end of the mysterious blue-green forest. There is a magical door here — like, an actual free-standing door frame, for some reason. The sheep suggests that the best course of action would be to enter it, heedlessly, and I’m inclined to agree. 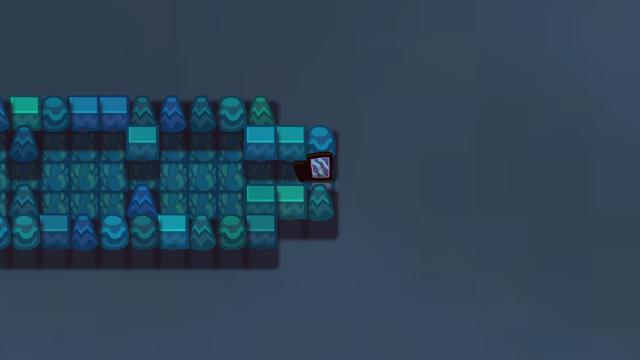 Tell me that you wouldn’t. Be *really* honest with yourself here.

The magical door takes me to a map, slash level select screen! There are houses, and mountains, and plains, and a critical path denoted by black dots. And what’s that in the lower left corner? 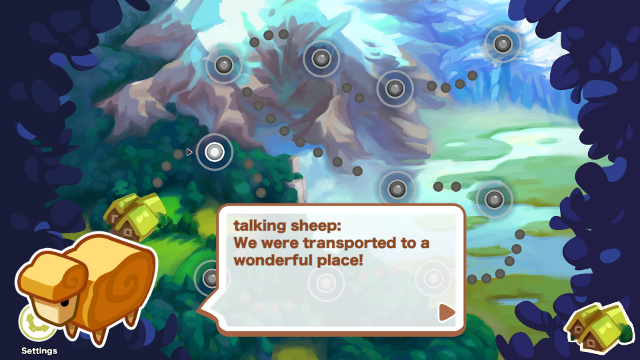 I can’t get to the setting yet, because the sheep keeps babbling. Also, the ‘sheep’ reveals itself to actually be some sort of big-headed nature sprite called Sproggi, which certainly puts the game title into some perspective. Sproggi is the “DARK LORD OF THIS REALM”, and they have taken me from my home to “BEGIN LIFE ANEW AS THEIR THRALL”. I’m not sure how I feel about this, to be completely honest. 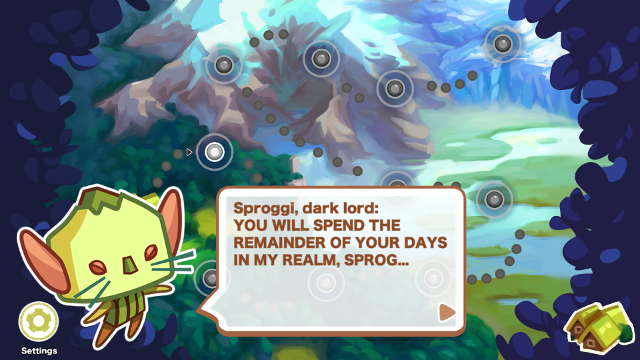 I’m not really sold on the idea, gotta be honest. Where’s the draw for me?

Sproggi isn’t the worst master, though, and to prove it, they take me to the ‘meager peasant village’ where I will ‘spend the rest of my days’. It looks lovely, to be honest. There’s two houses on a square field, some trees, a river. The buttons on the side promise an assortment of cool village building and gameplay furthering possibilities.

Obviously I can’t get to any of this yet, because Sproggi is still yelling. But it’s nice to know there’s something cool in my future. 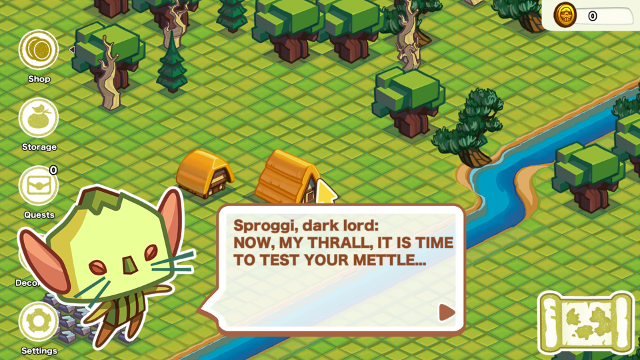 You’re certainly testing my *patience*, does that count?

Sproggi’s first task for me is… expectedly malevolent, given the whole Dark Lord Of The Sprog shtick, but also unexpectedly malevolent, given the whole cute aesthetic. In a cave called Ickykolo there lives a slime philosopher called Big Ick, bent on improving the station and mental development of jellies Sprog-wide. My quest is to ‘put Big Ick in his place’, which I assume is a euphemism for armed murder. 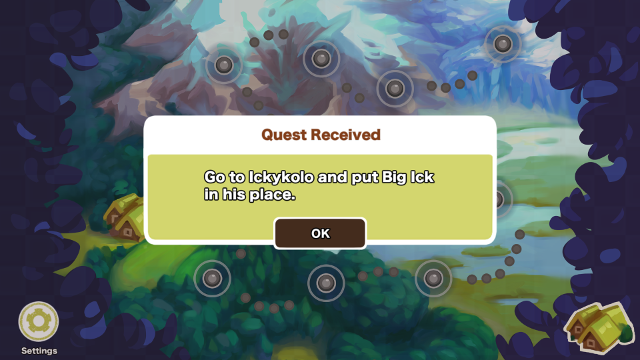 Though this game *has* zagged on me before, so I’m open to being surprised.

And that is how, only an hour after starting, my Cloghead farmer finds himself in a dark, spider-infested forest, far from home, under the thrall of an evil forest sprite, and tasked to murder a giant slime intellectual. 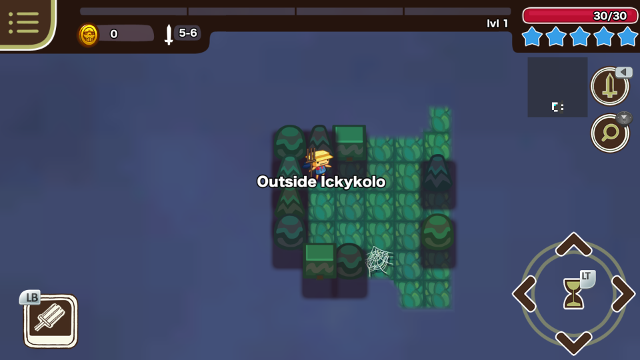 And it looked like such a good day waking up.

Well, you know what they say about life, lemons, and violently enforcing authoritarian forest sprite regimes. Check back in you after I meet Big Ick. Who knows, Sproggiwood may surprise me yet. I’d be surprised if this is actually the direction it’s taking. But then again, wouldn’t doing that be the biggest surprise of all?…