Two weeks ago, Daylight Studios emailed me (somewhat out of the blue) with a Steam review key for their latest game, Holy Potatoes! We’re in Space?!. They figured I might be interested in writing about it, given that I reviewed their previous Holy Potatoes! A Weapon Shop?! earlier. And they’re not wrong. While my memories of the potato-based weapon shop game are mostly a mixed bag of ‘interesting mechanics’, ‘overuse of pop culture referencing’ and ‘endless grind‘, I can’t say I’m not curious how a sequel to a game about forging fantasy weapons for fantasy ren faires manages to translate itself to space.

Just in case I’d already forgotten where this game takes place, the title screen of Holy Potatoes! We’re in Space?! is quick to establish that, yes, we are in fact in space. 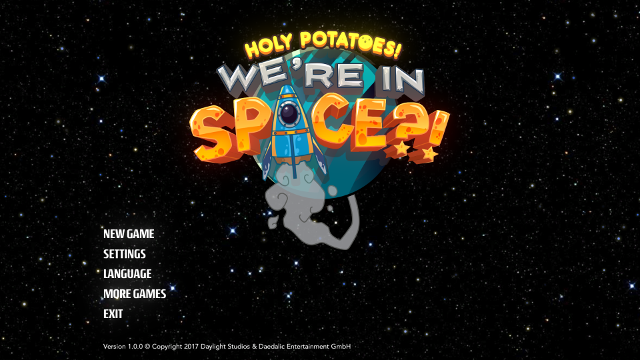 It’s got everything you expect from space. Stars. Planets. An infinite yawning void, maddeningly endless abyss of frozen nothing. Spaceships!

I appreciate Holy Potatoes‘ opening language settings, that’s an innovation I honestly think more games should use. I also appreciate the fact that I can set two kinds of ‘typewriter effect’, one for cutscenes and one for encounters. I don’t know what that means, but it’s at least twice as many typewriter-related options as any other game I’ve played. And finally, I appreciate the sheer audacity of the ‘More Games’ option just linking to some of the developers’ other games. No time like the very first title screen interaction to upsell, am I right? 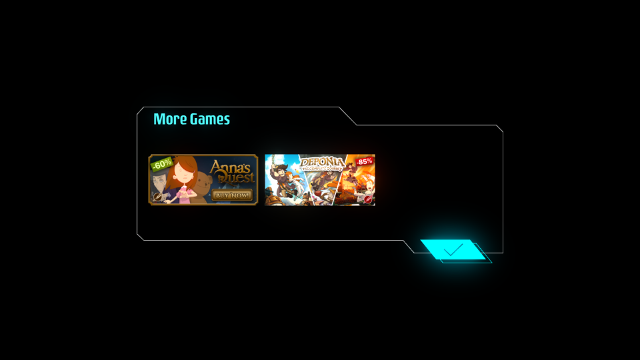 I have to say, I *would* have expected to see Holy Potatoes! A Weapon Shop?! here.

But enough beating around the bush. Space awaits. In whatever form, I don’t know. Based solely on the previous game I expect space-potato people, space-weapon crafting, and space-pop culture references. Let’s see how well my predictions do! 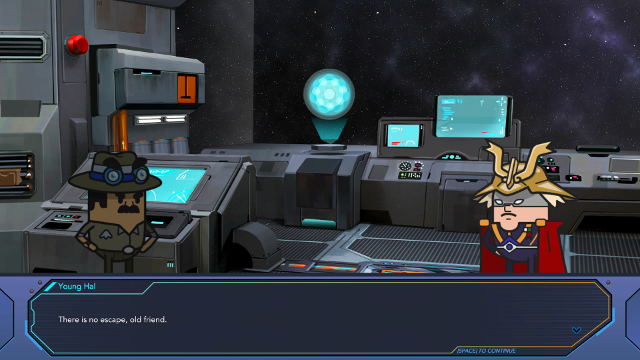 That’s one of three down right out the gate.

Against a fancy-looking starship backdrop, two potato people have a serious discussion. “There is no escape, old friend,” says one of them, apparently called Young Hal. “You don’t get to call me that anymore, Hal!” says the other, young Jiji. “Can’t you see what I’m trying to do, Jiraga?” asks Young Hal. It’s a little confusing to have these characters use different names from what the game is telling me their names are. It’s also somewhat difficult to tell them apart: their character sprites don’t animate when they talk, and I only have the changing of light tones to guess that Hal is the character on the right and Jiji/Jiraga on the left. As for what they’re talking about, I have no idea. Something about death and destruction, lofty ideals and betrayal, innocent lives sacrificed to stop a greater evil, and listen I can’t take this seriously, they’re talking potato people, for spud’s sake. 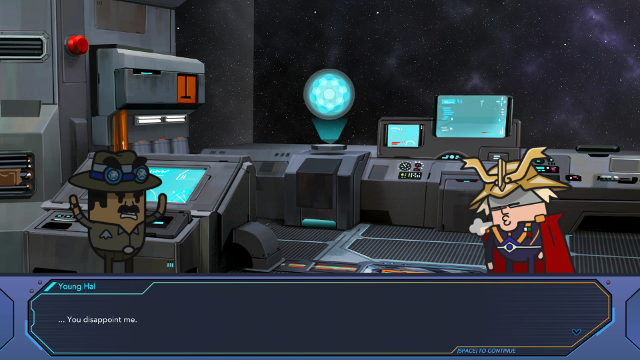 DEAL WITH IT, HARDHAT 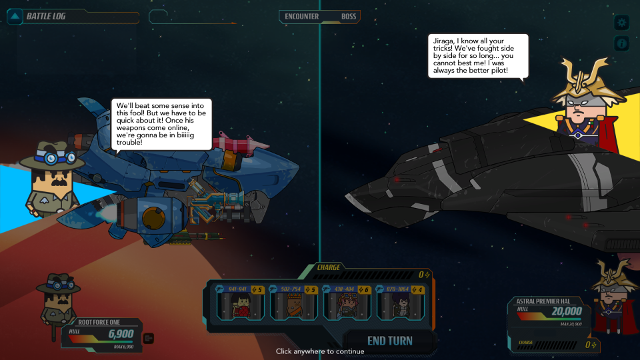 The fight will start after the needless posturing phase, I have to assume.

A process that involves many numbers. 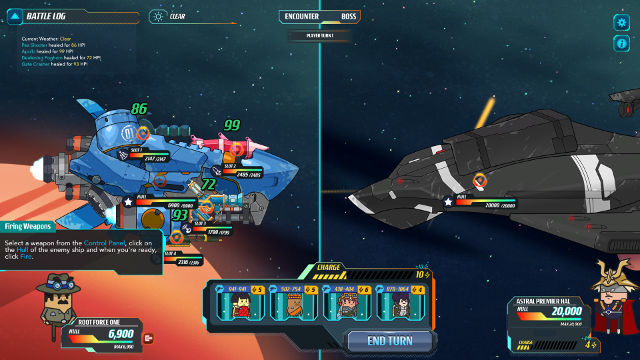 What happens next is a tutorial of the combat kind. First, I learn how to fire a weapon: click on the weapon in the panel, click on the enemy ship, and then press Fire. I’m free to select any weapon from Root Force One’s impressive-looking selection of guns, so I select a mean-looking laser cannon and blast away. 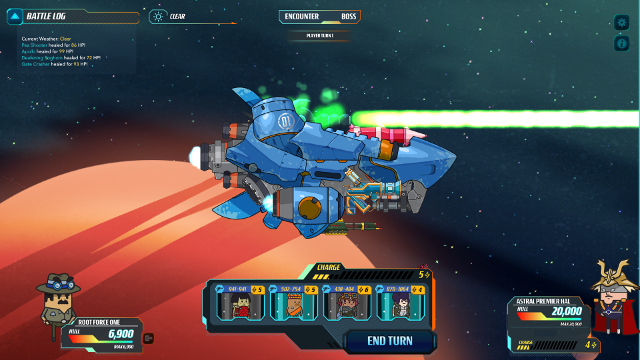 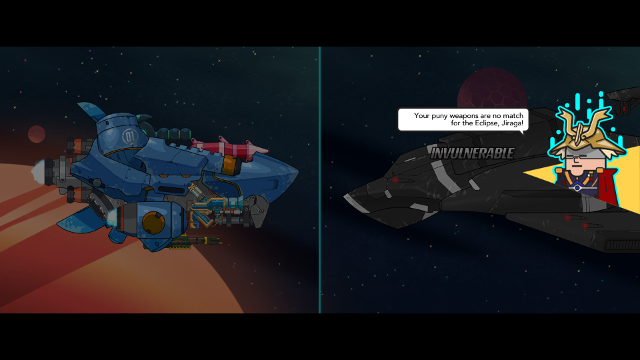 Hmm. They did, in fact, take that.

Ah. That’s the sort of battle this is going to be, huh.

Next, I learn more combat tricks. Hal retaliates by directly attacking my weapon, so I learn about moving my solitary shield to protect any one part at a time. Hal brings a mean-looking laser weapon online, so I learn about directly targeting his weapons, and destroying them before they can deal too much damage to me. It would be really helpful if I didn’t have to do that one shot at a time, so I learn about the ship’s power system, Charge, and how I can fire multiple weapons at once if the batteries are full enough. Hal brings out even more weapons, so I learn about special Pilot skills, which — just as an example — can lock down all segments of a given ship for 4 entire combat rounds.

Then I learn about weapons again! 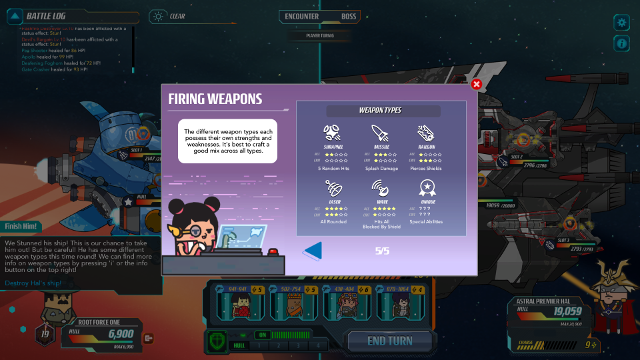 Anyway, some more fighting happens. Then Hal takes out a superweapon, and Jiraga decides that’s his cue to leave. Which he can just do, apparently? Hal vows to pursue him to the ends of the galaxy, and I’m on the edge of my seat. Okay, that’s a lie, but still, I’m curious. What’s the setup for this conflict? Who are these people? And what’s going to happen next?

I’ll probably never find out, because the game skips forward fourteen thousand days. 14.511, to be exact. I am now these potato people instead. 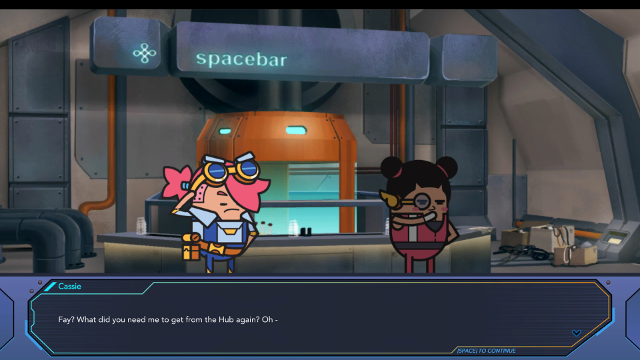 From tense conflict about the fate of the galaxy to two nerds in a bar named after a shitty pun.

The two spuds on-screen, I learn, are goggle’d Cassie and monocle’d Fay. They’re… the opening three lines of dialogue establish that they’re looking for ‘Jiji’, which I think means Jiraga, now fourteen thousand days older than he once was. He was kidnapped six months ago, and all Cassie and Fay have to go on is his paper journal, which space travelers totally keep. I think… the tutorial was supposed to be ‘Fay reading Jiraga’s recollection of that one battle’? It’s implied, at least.

Anyway, these two nerds have their own ship. It’s apparently both a hunk of junk, and a good ship. It has a terrible name, so I get to give it a better one. 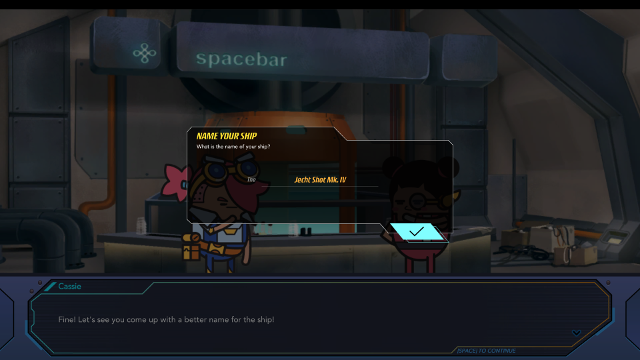 You’re free to ask why my brain went for *this* particular reference, but I can’t promise you I have an actual answer.

Anyway, time to actually play! This is our ship. As you can probably see, it’s currently missing both a Crafting Room and a Therapy Room. Obviously these are important rooms to have. 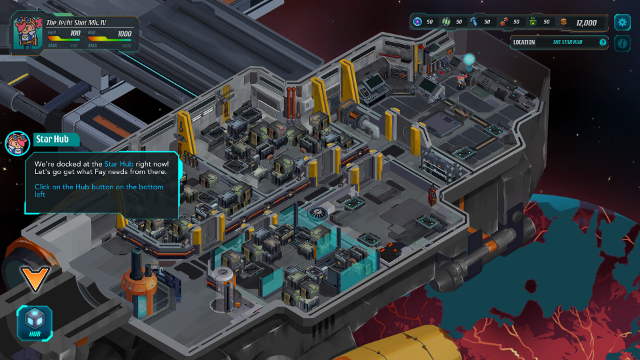 Where else am I going to do all my therapies? The mess hall?

Luckily, the Jecht Shot Mk. IV is docked to a Star Hub, essentially a cuboid strip mall. This particular one has an upgrade shop, which means I can buy a Crafting Room and a Therapy Room for the low low price of a thousand dollars — sorry, one thousand ‘$tarch’ each. 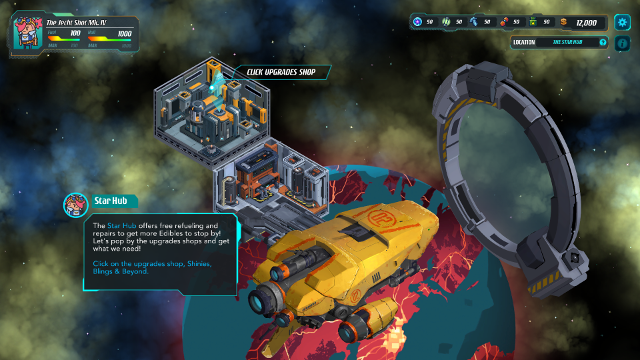 I hate that money is called $tarch, I hate the name of this upgrade shop, and I hate the planet graphic below as well, for good measure.

With the new rooms installed, I can now… craft weapons! Hah, called it, I knew there’d be crafting in here. The process is slightly arcane, and not helped by the multifaceted information overload that’s thrown at me, but as far as I can tell it works like this: add a weapon blueprint to the Crafting Room, add a crew person to the Crafting Room, and then wait. 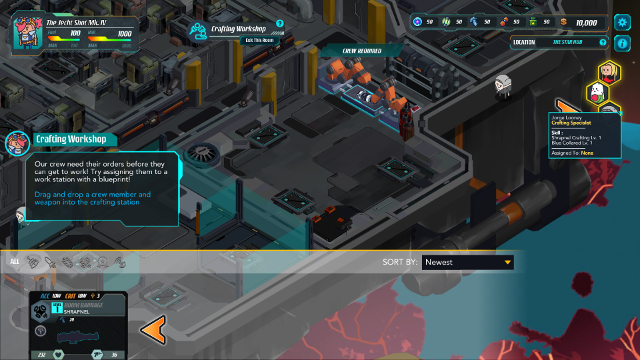 Sure, it sounds easy when I explain it like *that*.

Crafting items also takes up some ‘resources’, which exist in five discrete and colourful categories in the top right of my UI. It looks like I have plenty of $tarch and resources both, but Cassie and Fay seem to disagree. So what we should do is… explore! Not necessarily explore the galaxy, but maybe explore this little sector of space a little. Bringing up the map brings up one planet within easy travel range from the Star Hub. We can fly over there, explore for resources a little, then come back to the Hub and leave before the pursuing death fleet shows up! 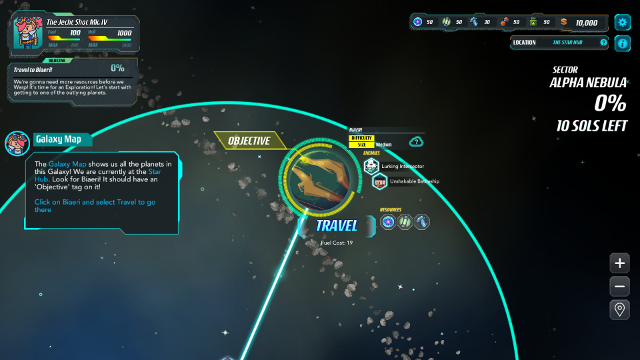 Wait, what was that second one?

Yeah, the game just sort of drops that one on me at the last second. Cassie and Fay only have a limited time to fart around in this little sector of space; ten Sols, to be exact, which I’m pretty sure just means days. If they haven’t warped out through the Star Hub’s giant ring gate by that time, a big and scary Eclipse fleet is gonna show up, and presumably mess up their day really bad.

I fly to the planet. This takes one Sol, which is enough time for my crafting crewspud to finish up a pretty decent-looking Shrapnel cannon. I equip it to the weapons station on the bridge, then equip one crew officer to operate it. Then I also equip the laser cannon I had lying around as well, for good measure. And then it’s time to explore!

Exploring looks an awful lot like looking at a 2D picture of my ugly ship and answering simple Choose-Your-Own-Adventure questions. 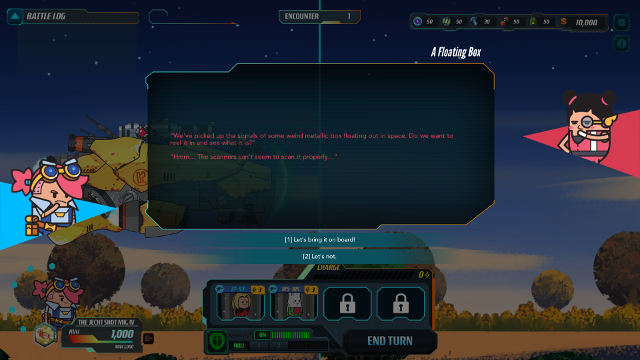 Of course I opened the box! There might be *treasure* inside!

There’s also some amount of combat, including battleships and leek people. 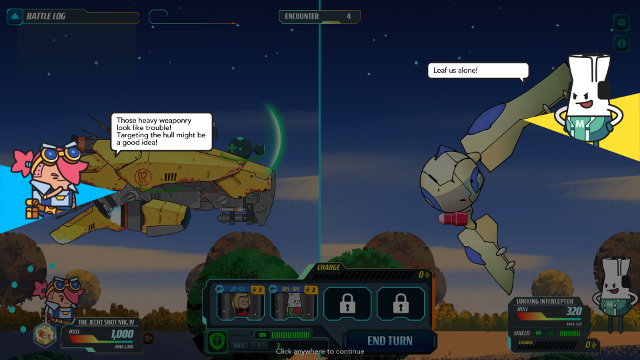 This would’ve been more exciting if I hadn’t *just* faced off against the most powerful armada of the old known galaxy. But I guess a one-gun-on-one-gun battle with a leek and their ugly ship is fine too.

After two choice moments and two combat encounters, the exploration ends. That… was it! For my troubles, I’m rewarded with two achievements, as well as nominal amounts of $tarch and resources. My gains are seriously minimal when compared to existing stocks, but Cassie and Fay seem to treat it as some sort of windfall. Ah, well, who needs ludonarrative harmony anyway. Even though there are technically still 8 Sols left on the clock, it’s now apparently time to make like a tree and…

Wait, would that joke even work in a world of plant people?

Anyway, whatever. The point is: I return to the Star Hub and click on the giant circular gate, and Cassie and Fay warp off to places unknown. Why they don’t just use a map is anyone’s guess, but at least it throws the Eclipse fleet off our trail.

And of course a new galaxy means new chances for adventure! I don’t actually know what our intrepid heroines are trying to achieve, apart from the nebulous goal of ‘find Jiraga’, but I have no doubt it’s a rich vein of storytelling potential. Maybe they’ll fight an oppressor fleet? Maybe they’ll aid a rebellion! Maybe they’ll sabotage a superweapon! Maybe they’ll find a stray cat! 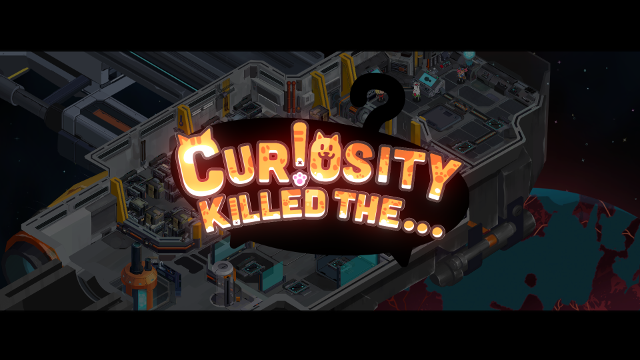 Yeah, guess which one is the one that happens.

So our first real mission out of the tutorial is chasing down a mischievous warping space-cat, huh? That’s the tone we’re going with? That’s what we’re using our precious time and dwindling resources to try and achieve? Alright, sure, fine. I don’t even know why I expected otherwise.

I’m off to look for the stupid cat. And maybe have some actual adventures afterwards. I wouldn’t recommend holding your breath, though. For a lot of reasons, but mostly the impracticality of it? If you really want to know what adventures I ended up having, you’d be much quicker off checking the second page instead.