I picked up Stellar Jockeys‘ Brigador on a whim after spotting in in the Steam store. Mechs and tanks rumbling through a cyberpunk war-torn cityscape? Clashing hot-neon colours with electronic soundtrack to match? Dozens of available pilots with varying levels of deep and intricate backstory? I have no idea what we’re doing, but hell yes, sign me the fuck up.

This title loading screen is quite something on the eye. 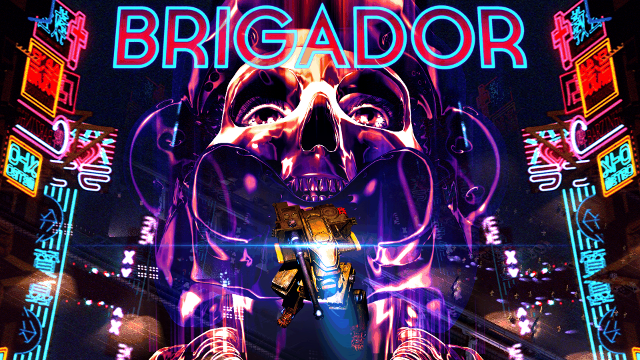 I came for electro-boosted clashing colours and I am not disappointed.

The actual title menu, in contrast, is far more subdued. Amidst an orange serial number and bright pink options, a text message from late 2016 welcomes me to the game. Apparently Loyalists are now in. 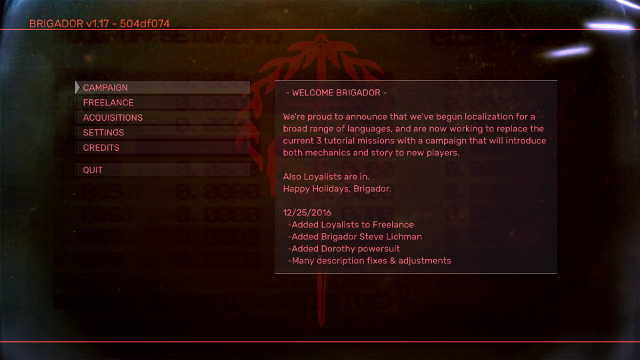 I was really hoping for Traitors to go into style again, but maybe that’s for the summer season.

I leaf through Brigador‘s menu options. The settings are much as you’d expect: limited but feature-complete graphics, no less than six audio sliders, sensitivity and speed settings, and a bunch of gameplay options that I can’t parse yet. 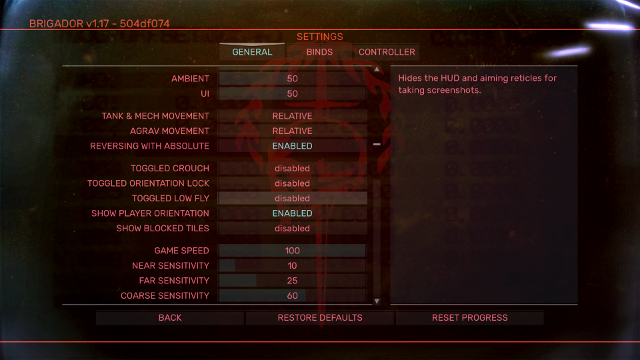 There are three different kinds of sensitivity to set and I don’t think I actually know what any of them do.

The rest of the menu is… less clear. Campaign contains a numbered set of missions, of which I can only select mission [00], fair enough. But then there’s Freelance, where I’m sort of… deluged with information. Pick a pilot, pick a vehicle, pick a primary and secondary weapon, pick an operation… each contained in long, confusing lists. Most options are still locked behind imposing-looking dollar prices, most of them starting at the one-million mark. I could in theory unlock all of these in the Acquisitions menu, I think, if it weren’t for the fact that I’m flat broke. 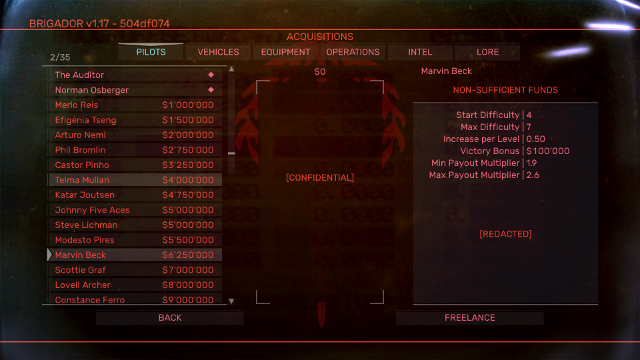 Still not sure why I’d *want* any of that, or what all of this means. But I’m assuming at this point that I’m dipping into a mode I shouldn’t have dipped into yet, so that’s on me.

So, yeah. Campaign it is. Let’s get to doing whatever it is I’m supposed to get to doing. 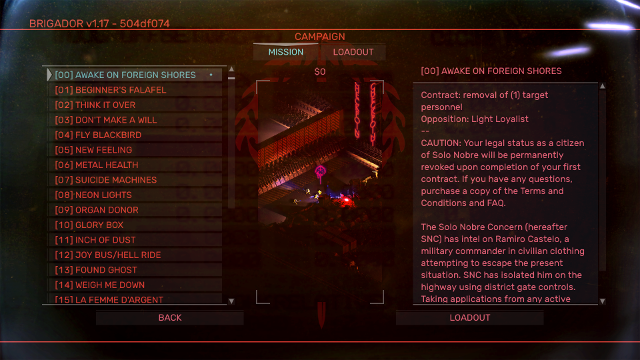 Take out one (1) target, lose my citizenship forever. Sure, I can do that.

I awaken inside some sort of weird rectangular nightclub. 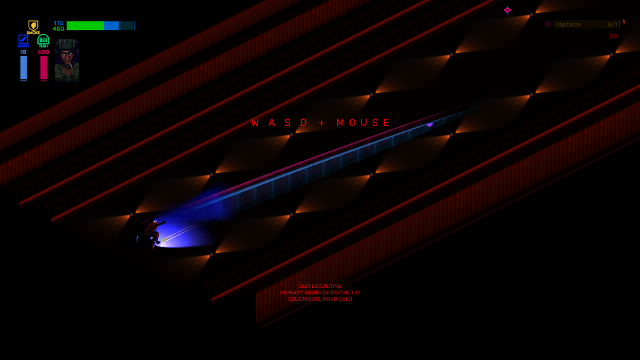 Or maybe the formal approach to one.

“WASD + Mouse” blares Brigador, so I do, and a lot is cleared up rather quickly. Moving the mouse swivels around the long red and blue lines on my screen, which rotate from a shape in the lower left corner that I need a few seconds to identify as a mech. It’s standing in the dark a little, but yeah. Legs, cockpit, the works. The W and S buttons cause it to lumber forward and backward, as you’d expect. Contrary to expectation, though, A and D don’t strafe — I’d expected a left-right strafing movement based on the direction I’m looking at) but instead… rotate the mech’s headlight?

Oh, no, okay. I get it now. Moving the mouse doesn’t change the mech’s full orientation, but just that of the lines — which, if I know my ‘mech’, indicates the orientation of the head. The A and D keys control the rotation of the body, and W and S move straight forward and backward based on body orientation. It’s the sort of control scheme that in other games would make me say ‘this character controls like a tank’, except I’m actually controlling a walking tank this time. Still, it takes some effort getting used to. 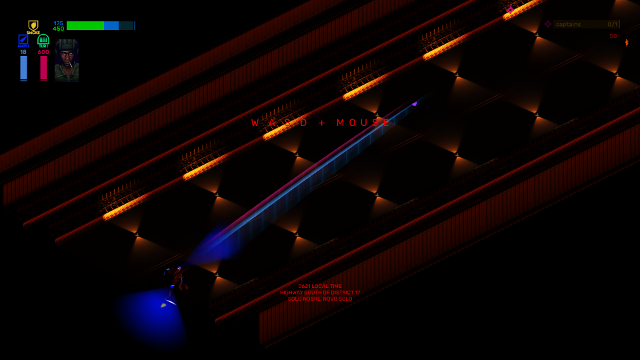 ‘No, stop facing backwards! Do I want you to, you rust bucket with legs!’ — me.

I get a functional hang of moving after about thirty seconds, and proceed down dark path, which — if I’m a mech, then this is probably less of a nightclub and more of just a normal street, with headlights. And tough-looking walls. And an infinite black void beyond those walls. An-

Suddenly, a Cats-esque monotonous voice blares into my screen.

“GREAT LEADER IS DEAD,” the voice blares, “SOLO NOBRE MUST FALL”. As it does, tiny shapes start trickling in from the right side of the screen, moving to the left. It takes me a few seconds to parse them as fleeing people. They’re so tiny! I do my best to avoid accidentally stepping on them as I move counter to the current. 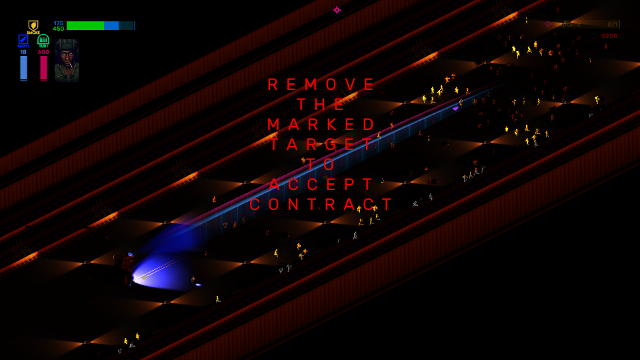 I have a place to go, after all.

I reach a hard corner after seconds of walking, wading through a sea of people that are more and more picking up that they should be running around me. To the left, I see a purple marker floating over what looks like a stack of containers. The marker target. I’m supposed to remove it, so… Mouse movement controls not only the orientation of the lines coming from my cockpit, but also the length. I move around a little until the lines point at more-or-less the marked spot, then press the left mouse button. A single shell launches forward so fast that I don’t even think to screenshot it, and just like that, the market target is engulfed in an explosion. 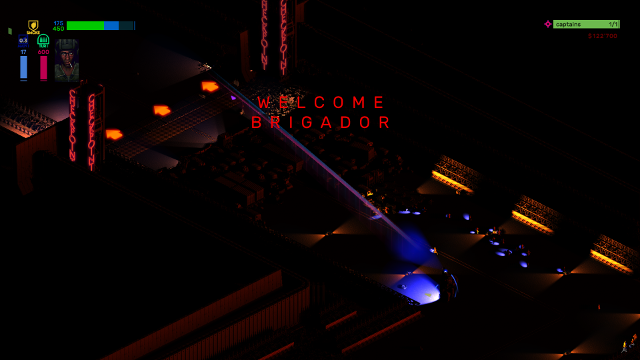 As the level fades out, I have no idea what I just did. The introduction slideshow that follows gives a little more context: this is the planet of Solo Nobre, which was ‘our colony’ until a revolutionary named Great Leader took it over, and now that they’re (apparently) dead, operatives called Brigadors are employed to dismantle the regime and return Solo Nobre to independe– well, to its rightful corporate owners, at least. 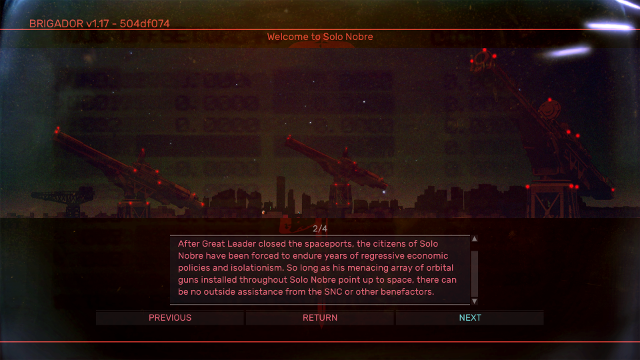 Look at all this lore-liscious backstory over here.

Luckily, the next three missions seem intended to actually help. I remember from the title screen that an actual tutorial was added to the game later, and it might be that I’m only just now getting to that. 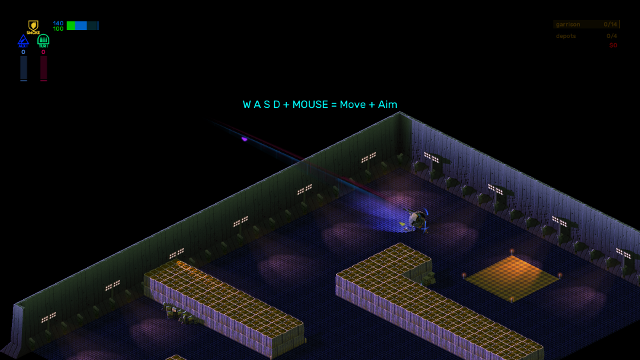 Compare and contrast *this* training message to the *previous* one.

I walk a small mech around a geometric training facility, learning things as I go. Mouse and keyboard are for movement and aiming! I did know that one already, but still. Left and right mouse buttons fire the mech’s two guns, which map to the blue and red aiming bars, respectively! That’s better, that’s good intel I didn’t 100% have yet. And how about this: the Spacebar button causes my mech to stomp its feet in a sulk. This utterly destroys a nearby wall. 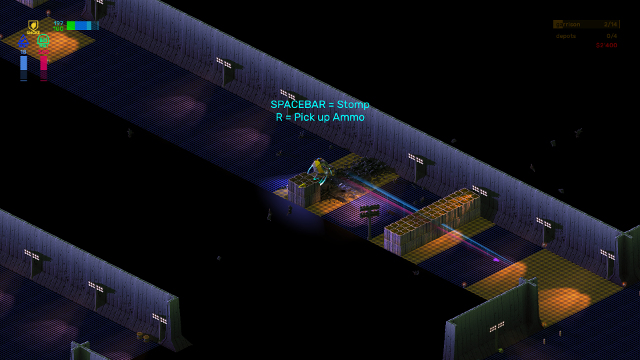 Okay, so I can’t destroy all walls: the imposing walls keeping the dark void out seem pretty much impervious. But anything else… it’s not even so much that I can destroy the walls as that I have to, which seems promising for later.

I learn a lot in a small period of time. For instance, I learn that the large coloured structured with an AMMO sign are ammo storage (shocking) that I can use to reload… but only if my gun matches the correct colour/icon. I can also destroy them, if I want, though I should probably avoid doing that from up close — I can stomp them to bits, but the resulting explosion is no bueno for my remarkably fragile mech and pilot. I learn that my mech can crouch, which disables movement in favour of gun accuracy, and that I can use middle mouse button to deploy a volley of smoke grenades on a cooldown.

And, of course, I learn how to fight. 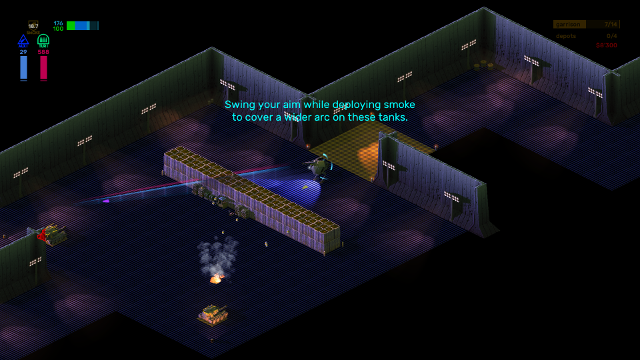 These tanks have no idea what’s coming to them.

I walk-‘n-stomp through the small training facility, destroying the nineteen garrisoned soldiers and tanks within. They do fight back: after a few easy setups to teach me the ropes of gun and smoke, I’m set loose in a larger arena where it’s actually kill or be killed. And, dang: it is tricky to control this mech in battle. I’m so used to top-down games like this having strafing and/or absolute direction controls that Brigador‘s mech-turning trips me up. It’s easy enough to aim and shoot… I mean, after I get the hang of the aiming arcs, which are their own kind of obscure science. But moving and shooting at the same time more often than not means I’m focused on shooting, only to find I’ve been walking into a wall for five seconds. Needless to say, I take in almost as much as I dish out; my mech limps through the exit gate with a fraction of its original shielding remaining. I’m so relieved that I didn’t die in the tutorial, it takes me a few seconds to register that clearing this mission has also awarded me with four point five million dollars. 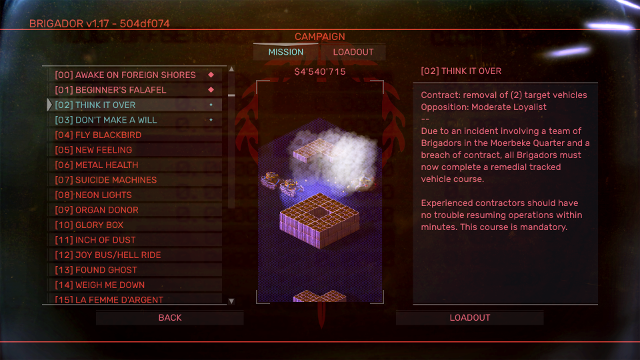 Or that’s what I initially think; looking back through screenshots, I see that I got ~2.2$ million payouts from both missions [00] and [01].

Missions [02] and [03] are also tutorials. I figure initially that they’ll deal with the finer points of mech control, or maybe different mech types, but no. They deal with different vehicle types, as in: in mission [02], I straight-up control a tank. 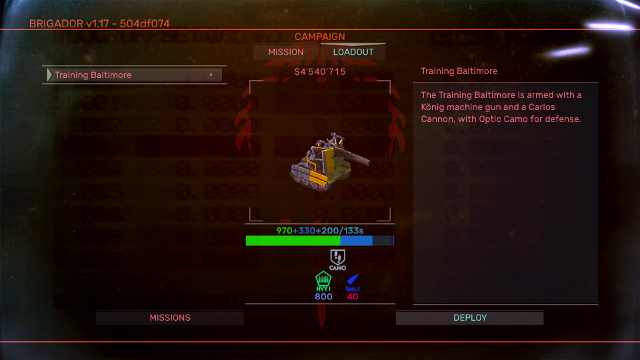 Or, well. More like an open gun platform on threads. But still.

While tanks and mechs are different beasts, the basics of their controlling are pretty similar: rotate the turret with the mouse, control with WASD. ‘Like a tank’, what can I say. The tank does lack the abilities to stomp and crouch, instead receiving a bull rush maneuver — just rev up the engine to squish soldiers and knock down walls. This particular tank also carries a cloaking device instead of smoke grenades, though I think that’s a feature of this individual tank (and the previous mech) instead of belonging to all tanks. But who knows. 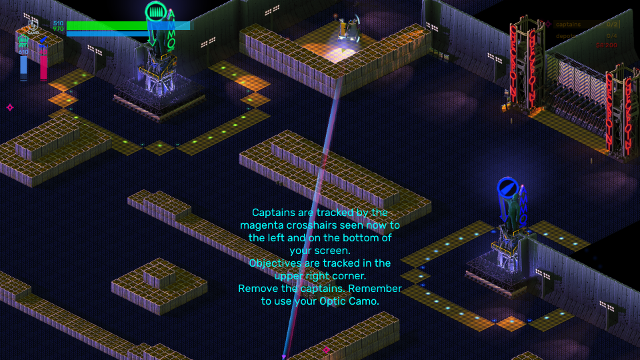 I also learn that it’s good to kill the marked ‘Captains’, which is another thing the old [00] tutorial *sort of* conveyed.

In the third, even stranger tutorial, I control an ‘Agrav’, which is essentially a floating tank. This one does control significantly different from the rest: Agravs don’t have independent turret movement, but turn with the mouse, and they do use A and D to strafe. Like I said I wanted, but as it turns out, not quite how I wanted: W and A strafe the Agrav left and right based on direction of movement, meaning that my brain twists itself into plenty of hoops whenever the Agrav I’m running is facing any way but straight up. 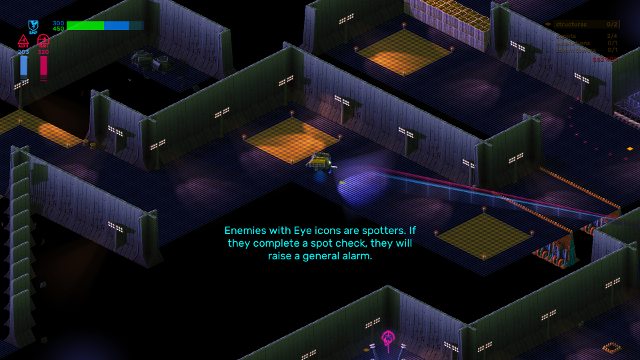 Quick, which button to press to strafe to the right! If you pressed D on instinct, congratulations — you’re dead. 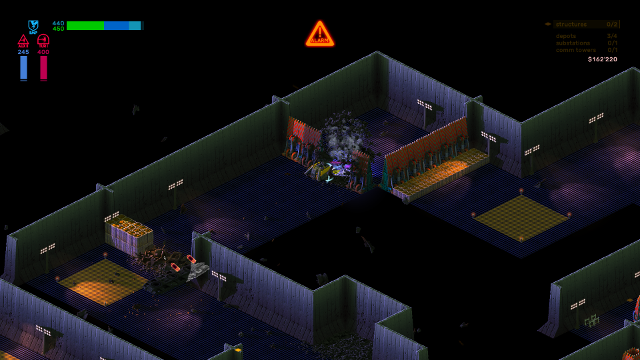 Oh, and instead of a foot stomp or a bull rush, Agravs respond to Spacebar with a *body slam*. You’d figure a delicate floating vehicle would try to *avoid* slamming the ground, but what do I know?

Apart from vehicle control, the three tutorials also slowly introduce mechanical complexity. This is how you reload. This is how you use special powers. This is how you find your targets. The Agrav tutorial introduces ‘spotter’ enemies, which trigger alarms, which (among other things) raise ‘panic walls’ in the level, restricting movement and necessitating destruction — unless I find and destroy the power substations and comm towers keeping the alarm up. Which counts as a secondary objective that I’d get paid for, anyway, so where’s the downside?

Finally, I make it to the end of the third tutorial level. Brigador sees fit to give me some final, ludomechanical game advice. ‘Play Campaign for missions, or play Freeform to make money, using vehicles and weapons and pilots Acquired with the cash you’re awarded.’ That seems like a pretty decent setup, honestly. And one final word of advice: 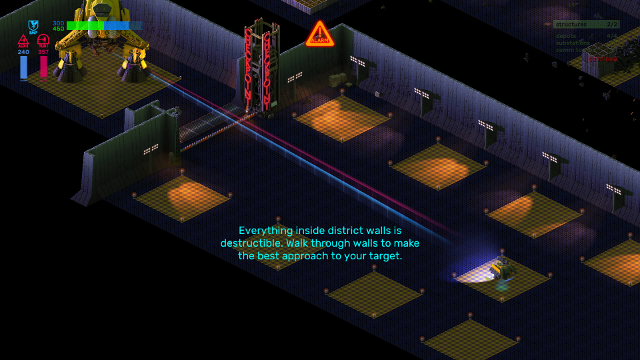 And just like that, Solo Nobre is my oyster. Where to go first? Some more Campaign missions, or a little Freelance mayhem? I’ve got eight mil burning a hole in my pocket, so maybe I can try out some new guns?… Yeah, I’ve got enough to think about. See you on the other side of the page, where presumably I’ll have leveled the entire planet.