Hexecutable LCC’s Beglitched is another 2016 alumnus long on my to-play list. I don’t know if it necessarily met with high critical praise, but I do know that I kept a tab to its Steam page open for something like four months, including one total Chrome loss and manual reboot. It looks neat! Between the bright colour scheme and aesthetic, the hacking theme, and the various cute animals, Beglitched just looks like a game that I would enjoy playing. Plus, the blurb tells me that it’s “a game about insecurity, in our computers and ourselves.” And I am hella insecure, about basically everything. So this should make for a fine companion piece to my day-to-day existence.

Good Lord, this game is pink. Hot pink, bright pink, and pastel pink, with some blues and purples to boot. Can’t fault it for having a colour scheme, at the least. 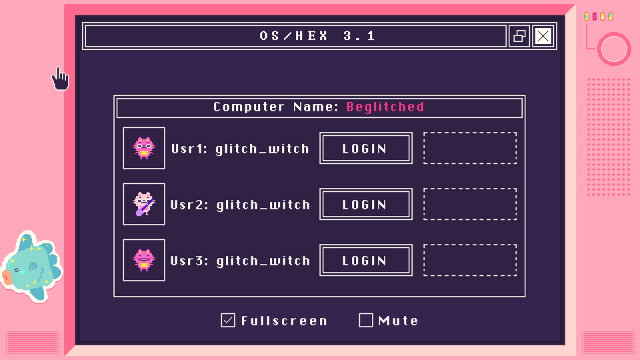 And this *does* make it match with the native Ninja Blues layout. I’m pretty sure.

This game is also very immediate. By which I mean, that screen? It’s the first thing I see on starting. There’s no… real load-in, as far as I managed to get. No explanation. From the look of it, not a whole lot of possibility either.

I click around for a bit on everything that’s not a big LOGIN button, including the coloured lights in the top right and the Mola Mola sticker in the bottom left. Nothing. The only results I get are from clicking on the ‘OS/HEX 3.1’ Windows-style bar buttons, which — you probably won’t be surprised by this — act as a window/fullscreen toggle, and a hard exit. Ask me how I discovered that last one.

With seemingly nothing else to do, I decide to ‘LOGIN’ to one of the user accounts, all titled ‘glitch_witch’. All three are headed by cute pixel cats, but I pick account number 2 because that cute pixel cat has a lil’ spade. I don’t know if that matters; I don’t know anything at the moment.

A ‘password required’ prompt pops up. Before I can take a crack at the right password, the sound of ethereal keypresses fills one in for me. 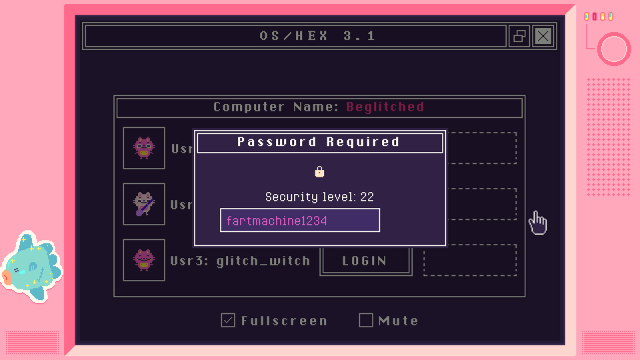 Poorly so. Come on, guys, I could have gotten this!

“INCORRECT PASSWORD DETECTED!” the popup yells. Yeah, no surprise. Then a lot of things happen in quick succession… 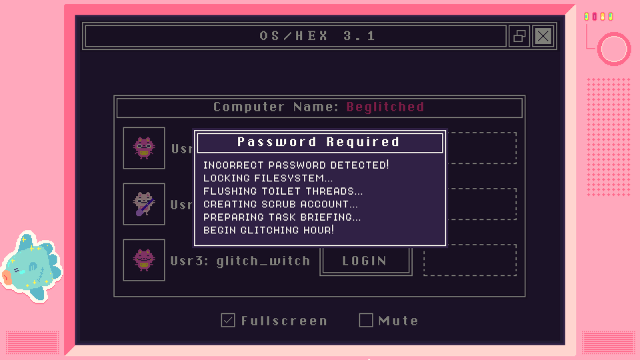 What the hell is even *happening*?

…and at the end of a five-second sequence of total confusion, I find myself looking at a computer desktop. 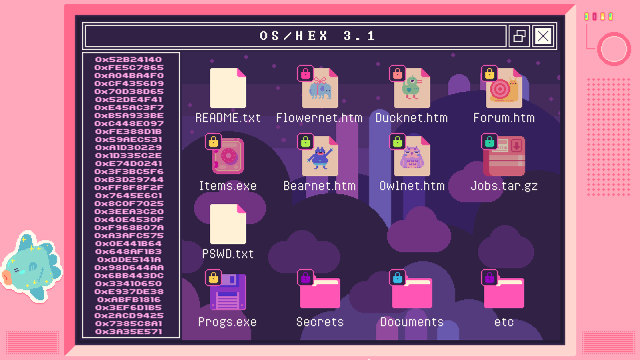 This is the weirdest security system I’ve ever run into.

For reasons unknown, I’m looking at a combination computer desktop/pastel factory explosion. The game has given me no indication what the hell is happening; luckily, I did watch some of the teaser movie on Steam, which reveals that this is a strange laptop that ‘you’ (the player) found in a box, and have decided to fiddle around with. That’s already some useful context.

There are several icons on the desktop, but almost all of them are locked. When I click them, my out-of-control player persona immediately shotguns a bad password, and is shot down. So I won’t be accessing those files any time soon. Whatever they even are. 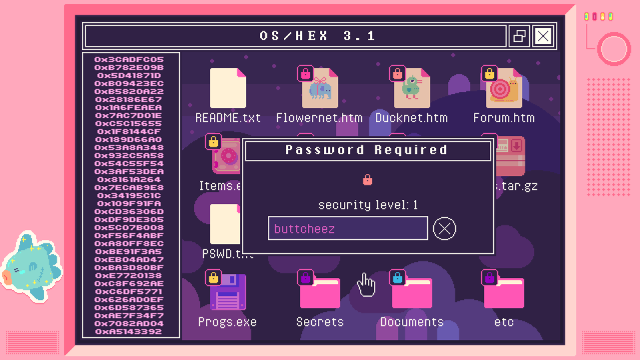 For real though. Am I remote-controlling a six-year-old?

Good thing there’s an open-access Readme.txt right in the corner. Don’t mind if I do! 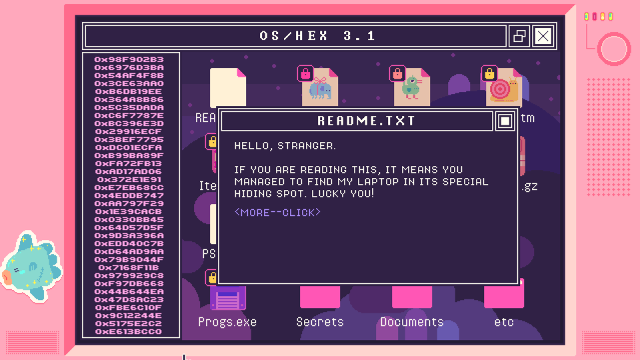 Could also have been called ‘ThePlotThickens.txt’.

The Readme file is actually a message from the Glitch Witch. I don’t know what that means, but they’re apparently “a pretty cool computer witch”, “manipulating the fabric of the modern world to my will”. I still don’t know what that means. Anyway, the long and the short of the message is that since I found the Glitch Witch’s laptop, they might be willing to let me in on some of the juicy secrets locked inside… assuming I do them a favor first. 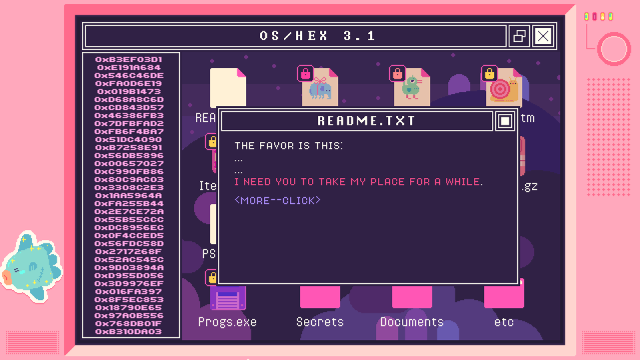 How hard could *that* be?

Glitch Witch’s message instructs me to go to ‘Flowernet’, to get familiar with the workings of their computer. Flowernet is locked off, but the message tells me the password: ‘onechiefr0cka’. Classy. Sure enough, when I click Flowernet.htm this time around, the right password is ethereally entered. And I find myself…

…in what looks to be a series of boxes. 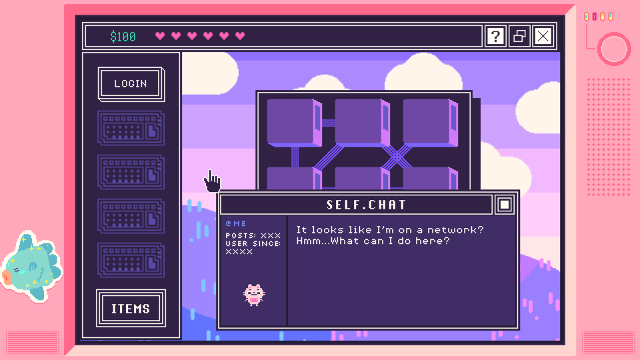 Helpfully overlaid immediately by a chat window, wherein… I talk to myself, I guess.

Huh, this is new. I wonder what I’m supposed to do here? 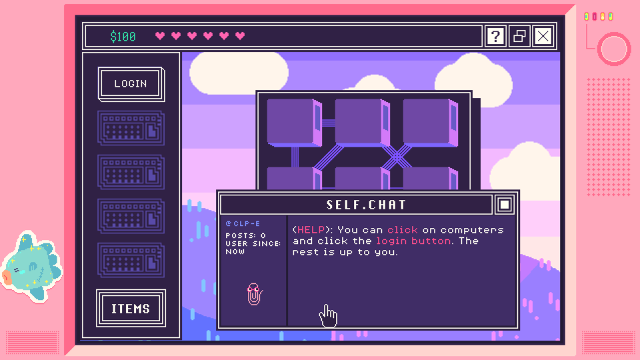 Ah, I… I guess that clears that up. Thanks.

Let’s try to make sense of what I’m looking at. In the center of the screen, I see nine blue-purple boxes, connected by purple threads or blue arrows. The center bottom box is different from the rest: it’s faded out, has a screen and an icon, and there’s a little cat avatar on it. Hey, that’s the cat I picked earlier! Except sans shovel. I feel cheated right now.

By clicking on the boxes arrow-connected to my current box, the cat moves there. Then, I can click the Login button in the top left corner, wary of the fact that all this weirdness started with blindly logging in someone. The results are… pretty much nothing. The first box I try to log into returns zilch. The second, nope. The third… 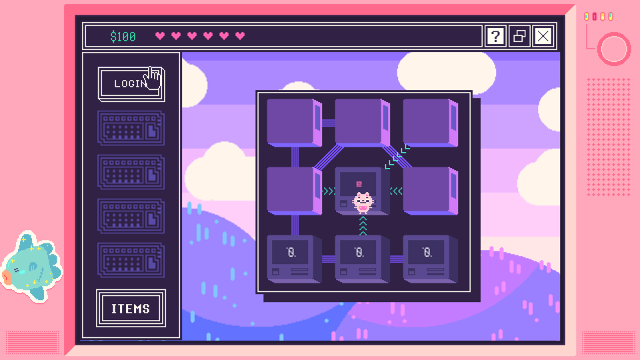 Alright, this is at least *new*.

Logging into the computer still resulted in a big ‘nope’ message and a sad face, but there’s a different icon on the screen now; a pink ‘e’. Wonder what that means? I try to explore some more, but find nothing else… until I log into the solitary computer in the top right. After logging in there, the screen displays the universal pastel-pink icon for ‘exit’. And I notice that I can log in again immediately after; when I do, my cat avatar teleports into the void. 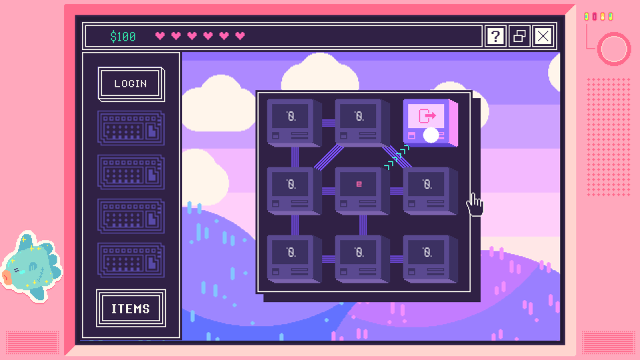 And to another set of boxes. 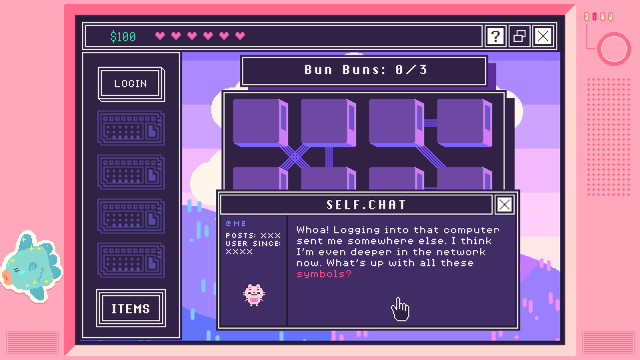 Cat Avatar helpfully suggests that the boxes are supposed to be computers. Which, in fairness, I can sort of see. And logging into the particular one I did has sent me deeper into the network — sort of the opposite of what I’d expect an ‘exit’ button to do, but I can deal with it.

I click halfway through the computer network in a daze of confusion before I think to ask Clippy for help — who did explicitly tell me to click the question mark button if I needed advice. 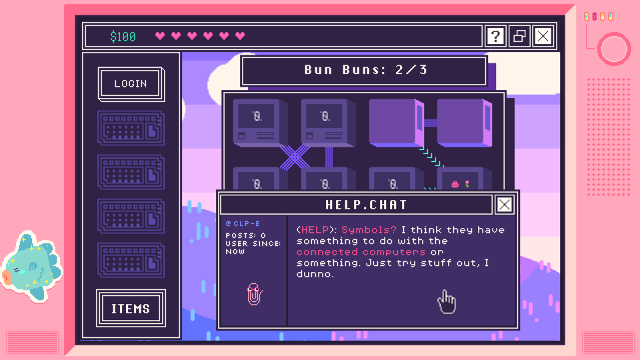 They never said anything about *good* advice, I guess.

Well, that didn’t help much. I resume clicking on and logging into every computer in the network…

…until suddenly, I realize that a pattern has slowly revealed itself. 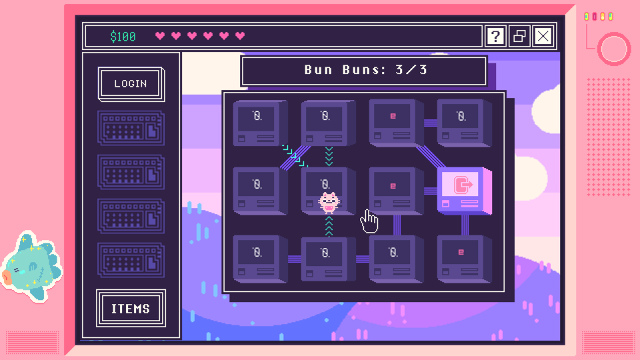 Before I can test my theory, the next network kicks things up a notch. 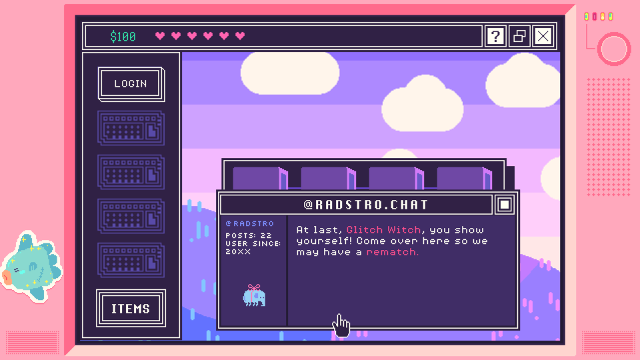 A confusing and oddly-shaped notch, but I’m starting to see that that’s par for the course in Beglitched.

I’m being smack-talked by a rookie hacker hiding behind a poorly-drawn elephant. This is real life now, I guess. They’re under the impression that I’m the Glitch Witch, which at least means the ‘taking my place’ thing is working. They’re also no longer the ‘weak leftclicker’ they once were, and demand a rematch. A rematch of what? 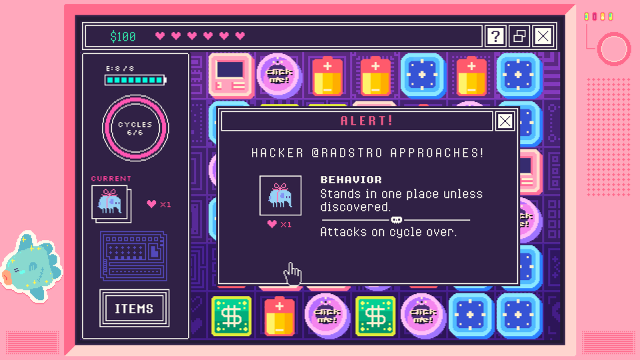 And now I’m playing a match-3 game. This… is all real, right? I’m not hallucinating any of this? If I’m in a hallucination you have to tell me when I ask, I’m pretty sure that’s the law.

With only a little prodding, the elephantine hacker @Radstro tells me that this is the ‘battle grid’. @Radstro is hidden somewhere on the battle grid, and they taunt me that I can never defeat them with ‘clicking and dragging sectors’, and ‘exploding a bomb on their location’. The over-informative villain monologue is a classic for a reason. Beglitched even helpfully indicates that the purple circles with the ambivalent faces are ‘bomb sectors’. It also equally helpfully tells me where @Radstro is, who — in their haste to boast and mock — seems to have forgotten to actually hide. 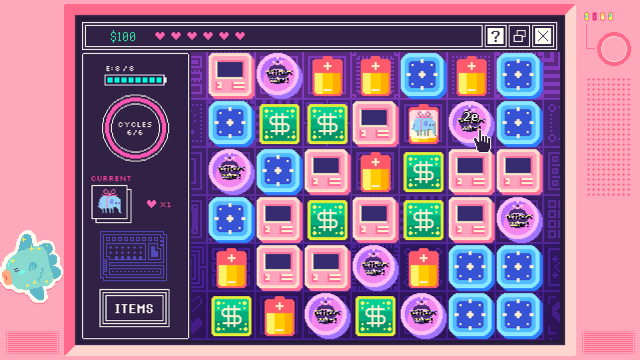 See if you can spot the devious enemy.

Let’s try this out. I click and drag a bomb sector next to the elephant. This costs me One (1) Cycle, as indicated on the left. I click the bomb, which makes it explode. Costs another cycle, plus Two (2) Energy. Nothing else happens, save that a new icon falls down. Ow, right, I should have put it exactly on the elephant.

I move some more bombs, accidentally matching a bunch of other icons and making cascades of icons rain over the screen. I click a few of them too, to visual but otherwise uncertain effect. Finally, I manage to get a bomb over the elephant, and set it off. 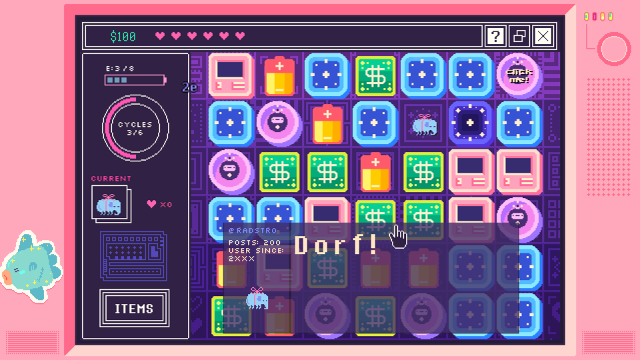 I guess this is what I wanted?

@Radstro swears to train harder and return for the rematch. Which is exactly one network over, when they return in embarrassment and tell me they weren’t actually intending to be visible last time. It’s time for a re-match! This time, @Radstro is actually invisible. You’d think that that’d make it harder for me to blow them up, but in a rare moment of directed guidance Beglitched teaches me to use the pink ‘computer’ sectors and the blue ‘compass’ sectors to hunt @Radstro down. Basically, I can activate computer sectors (for one Cycle and two Energy) to learn exactly how many squares away the enemy is from the computer square. And activated compass sectors give me a general idea of where the enemy is, again relative to the icon. 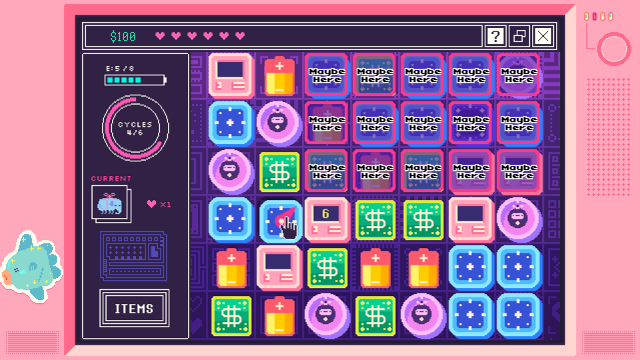 By activating a few sectors, and then jiggling them around — and comparing the different predictions — I’m once again able to nail down @Radstro. Then it’s just a matter of dragging another bomb over, and… sure enough, they DOINK around just as doofily. Haha! I AM HACKER

I make my way through one final network maze. This one doesn’t have angry hackers, but a lot of eggs. Not the Twitter kind, the scrambled kind: I need to hunt down three more bun buns, but if I log into a computer with an egg logo, the network gets ‘scrambled’ and all my progress is erased. This serves as a lesson, I think, that not every computer is good to log into: be careful about what you do, and only commit to those logins that you know are good. Good advice overall, to be honest.

And then, I hit the final network. There’s no challenge here, only two things: a message from Glitch Witch, and a new program for my side bar. The program is an icon legend, very helpful for learning what these things are all about. I guess I’ve already shown I don’t need that anymore. The message is one of congratulations. Glitch Witch is satisfied with my progress, and in beating ‘that clown’ — which she must have predicted I would fight, seeing as though these are old text messages. The message gives me the password for level 1 locks, meaning I can now access Ducknet. 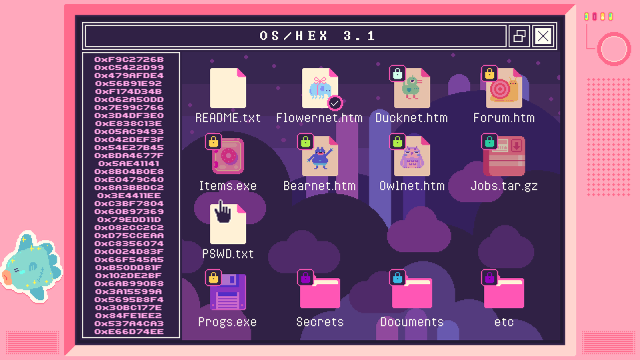 Okay, I see the shape of this. The different networks and folders are locked by different levels of password. By doing jobs for Glitch Witch, I should be able to collect more of these, as well as more programs, and gain more and more access to their computer secrets. For… whatever reason? It doesn’t matter, I’m down anyway. Let’s see what terrible hacker work Ducknet holds!