Oh, right. I forgot the needless inclusion of sexual distress. Silly me. 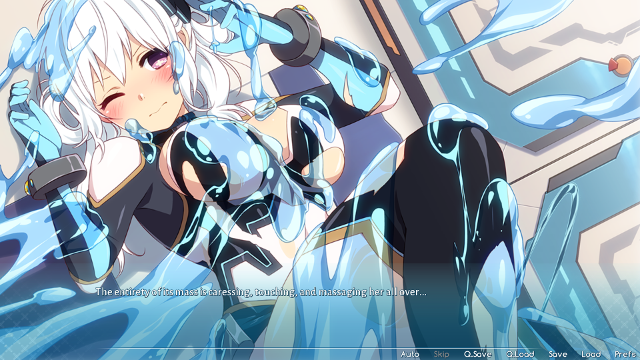 I almost forgot I was playing a Sakura game!

But yeah, no, otherwise it played out pretty much exactly like I thought. The whole setup of being on a spaceship and chasing a mysterious poorly-known intergalactic criminal is unceremoniously ditched when Sakura Space reveals Akane to be on the ship already. Instead, what plays out is a weirdly-structured ‘catch me if you can’ story: not only does Akane know about the bounty, but she actively eggs on the protagonist crew to try and catch her. It turns out that the crew is space famous across the galaxy, which they themselves didn’t know but a lot of other people did, and Akane has been committing her crimes specifically to get a bounty so she could get their attention. At first it looks like she’s trying to just have some fun, or prove her superiority, by one-upping the crew members and then filming them in sexually compromising situations. But in the end, it’s revealed she’s got a case of the hero worship and she would really rather be with the mercenary team. She’d in particular like to be with the captain, if you catch my drift. 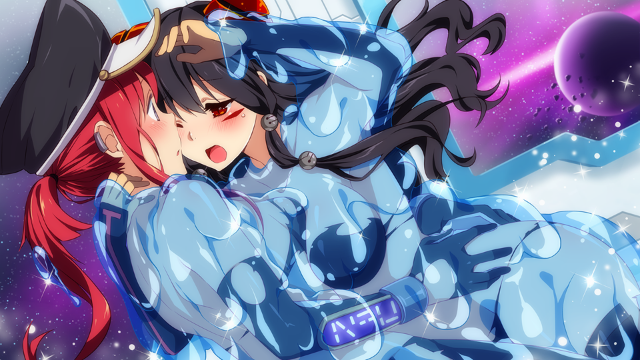 But don’t worry if you didn’t catch it, I’m more than happy to help you *visualize*.

So the crew fall for a few of Akane’s traps, then devise a good counter-trap of their own, capture her, and then decide to let her join the team instead of cashing in a billion-credit payday. And now you know the plot, as they say. I better put some heavier-duty spoiler warnings on this review.

My opinion of Sakura Space is… I’m gonna say mixed. It’s obviously not one of the stand-out good ones, which is to say that it’s not Sakura Swim Club, But Space. It’s also not one of the stand-out bad ones. It’s not terrible, mostly par for the course for a Sakura game. It’s just… I want to give it points for trying to be neat and innovative, in a few places. But if I’m gonna do that, I also have to dock it points for failing on fairly basic levels when it comes to storytelling. And all the weird sexual violence, that too.

Narratively, Sakura Space is an odd duck. I’ve played two kinds of Sakura games so far: games that set up a whole own world and mythology and then have the story revolve around that somehow (your Sakura Angels and Sakura Spirit), and games that use a more default real-world template to tell stories in (Sakura Swim Club, Sakura Beach). Sakura Space is the odd one out here because it spends a ton of time setting up the Space Future Setting, but then ditching everything that makes the setting cool to tell a simple crime story that in no way uses it. Seriously, this whole Akane chase thing could have been set in a mall. A big part of it is set in a mall! Nothing in this story uses the space setting, or the interesting concept of a mercenary company carrier, to any sort of good effect. Not even the space technology plays any major role, save for one or two ‘gotcha’ moments. And even then, they’re not crucial. Replace the holodeck with a training gym, the AI with an additional character, and the fancy future weapon with a gun belt and a net, and you’re there. All that leaves to explain is the ‘massage gel’ that this game is so fond of.

I’m not saying there’s much in this setting that should be used. It’s interesting in concept, but light in real detail. But why spend so much time laying the groundwork anyway if you’re not going to apply any of it? 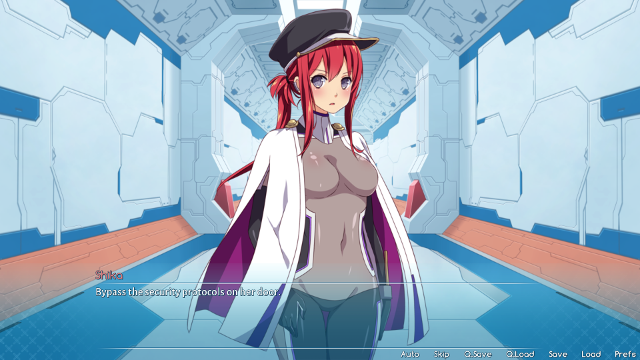 It’s actually very important to understand that the AI on this ship can override all locks at the captain’s behest. This is a much better and much more functional explanation than ‘a lockpick’ or ‘a boot and strong leg muscles’.

What’s odd is that Sakura Space seems to understand this, on some level. After the initial Akane reveal, the world-building basically ends, to be replaced by more character-driven story beats. But while you’d think I’d welcome that, it doesn’t really work. Not at this time, and not for this game. I’d have loved a game that actually looked at these characters, and maybe explored what it means for them to hunt and be hunted by a clever criminal over a potentially life-changing prize. But obviously none of that happens. Instead, we get a handful of scenes where the characters talk about themselves, just sort of describe themselves, in a fancy splash art pose. “Don’t worry, Captain,” Kotori says, flashing her knives, “with these cool knives, I always take down any bounty we hunt! Because I’m so good at it!” 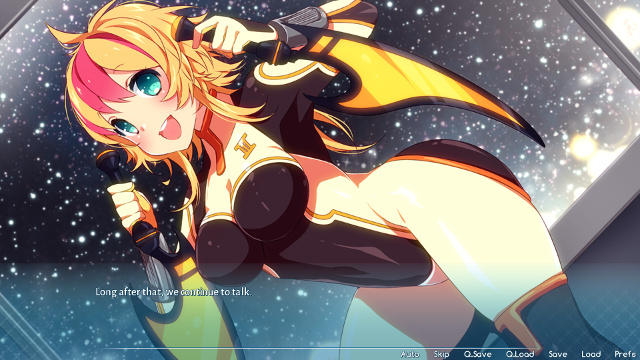 ‘After that, we talk more. But you wouldn’t be interested in that.’

It looks and feels almost like a fundamental misunderstanding of what makes character-driven stories work. You need to get us to care about these characters. Not throw in a half-hearted plot hook and then have them all talk about how much swimming pools they’re gonna buy with the money. Sakura Space makes overtures towards this, particularly near the end: Akane’s ‘narrative arc’, if you want to call it that, could have been an interesting plot beat in a more competent game. But in this game…

It doesn’t matter, is the point. None of it matters. If we’re still playing Sakura Space past the fifteen minute mark, we know why we’re here: schlocky action nonsense with liberal cheesecake. You don’t need to explain to us that Kotori is an excellent dagger fighter, or that Nami yearns to explore the void of space. The latter is never relevant, and the former will come up anyway. It almost feels blasphemous to say this, but taking the time to establish details in a game like this is basically wasted effort.

What’s particularly disappointing is that mechanically, Sakura Space shows traces of interesting ground work. There are no less than twenty-one discrete choice moments in this game, all of them binary. Before clearing the story the first time, I had it in my mind to comment that almost all of them felt oddly strict, guided almost: like they all had a right and a wrong answer. ‘Is there more to Akane than her whip skills, Y/N,’ asks one choice. If you answer ‘no’, Shika and Nami talk about how she also exhibits stealth, planning, and programming skills. If you answer ‘yes’, the captain confidently states that Akane’s not all she’s cracked up to be… whereupon Nami disagrees, and the two talk about how Akane also exhibits stealth, etc, etc, etc. Clearly one of these two looked like the ‘correct’ answer.

It looked that way because it totally was: at the end of a Sakura Space playthrough, you are actually graded on the number of ‘investigation questions’ you answered correctly. 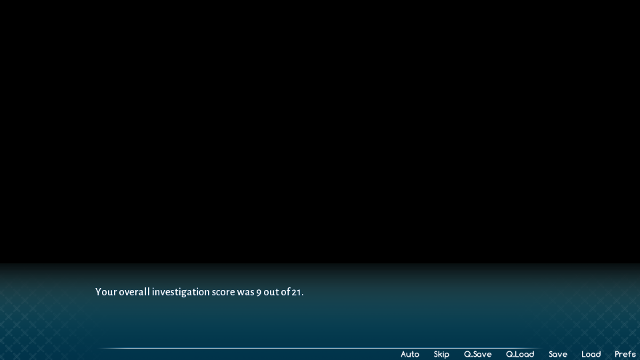 Don’t blame me, I was roleplaying a careless hot-headed Captain Shika. You should be glad I got questions right at all!

In a more competent game, this could be the basis for an interesting branching narrative. Maybe you’d get more options if you investigate right, or you’ll be able to get under Akane’s skin better? As it stands, it’s just a numerical score that engenders maybe one or two replays. Or you can read my review and learn that it changes nothing at the end. Not even a bonus scene at the end.

And apart from that… I mean, it’s just a visual novel. You read the pictures and occasionally make the meaningless choices to get to certain #content. And it’s a Sakura game, meaning that a lot of that content will be needlessly sexy. Think disappearing clothes, think two characters kissing. Or in a few occasions, think played-as-hilarious sexual assault: Kotori has a ‘fun’ habit of sneaking up on her co-workers and then forcibly groping or making out with them. This is played as a joke, because of course it is: for all the strides Sakura games make sometimes, I’m not holding my breath for one that tackles sexual consent in a meaningful way. 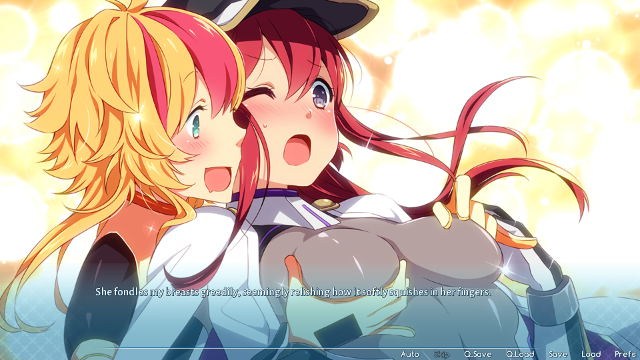 Pictured: a person who does *not* get fired or jailed immediately after.

In ‘fairness’, and I use this term as lightly as possible here, Sakura Space has a similar issue as Sakura Swim Club here: a lot of the seemingly-odd narrative choices of character discrepancies are explained ‘better’ in the cut 18+ content. Play that version of the game, and you’ll learn that Shika, Nami, and Kotori all casually sleep together all the time, and that Kotori’s behaviour can be read in that perspective — one of assumed consent, still thorny, but turned into explicit consent later on. And things like Kotori’s love of ‘pool parties’, mentioned once in the clean game and never brought up again, make marginally more sense when you see that… but let’s not get into that here, I do try to run a work-safe column. 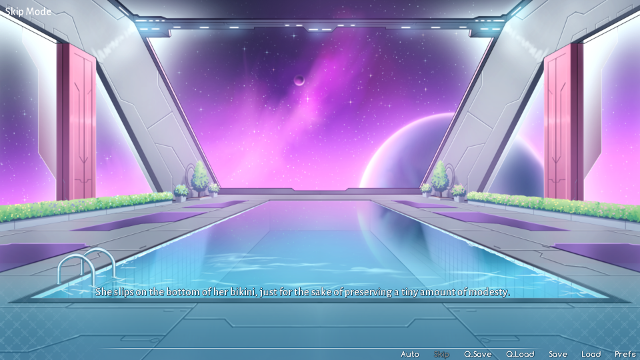 Yeah, it turns out this scene was toned *down*.

So, at the end of the day, is there any real reason to recommend Sakura Space to interested buyers? No, not really. The story isn’t good, half attempted grand chase story and half ‘wouldn’t it be cool if these hot women tried to strip each other in public’ that builds to nothing and ‘resolves’ a plot that didn’t even exist for a good three quarters. It experiments with player choice and scoring, but not in a way that matters; I applaud the initiative, but maybe a different game can actually use it. And even the porn isn’t particularly good… although your mileage may vary on that point, I guess. I’m a little burnt out from Sakura nudity. I wonder why. If you’re not, and you’re looking for a(nother) fix of blatant cheesecake that can be patched into blatant anime pornography, I guess Sakura Space isn’t a terrible choice. For ten bucks, you could get more or cheaper porn, but… I’m not judging, hey. I played it; I lost all moral high ground from the word go. That said, If you’re looking for a good visual novel, or an interesting story, there are better games even inside the Sakura line. Or you could widen your search parameters to include brands that aren’t renowned garbage.

Jarenth grumps, but remember that he plays these games voluntarily. Mock his lifestyle choices on Twitter or hang out with him on Steam. And if you dig Indie Wonderland and Ninja Blues in general, why not consider supporting our Patreon campaign?