Winter Wolves‘ Loren The Amazon Princess is another fan request for VNADS 2016, as well as a game I’ve been interested in checking out myself. It’s been on Steam since January 2014, and I think I remember that it’s one of the first self-identified visual novels I personally ever saw on the platform. It might even have been part of the seed that originally led to VNADS, who knows? I needed only the gentlest of nudges to check this one out.

(Spoiler levels: Narrative, high, but only for the first third of the game. Mechanical, medium.)

Wow, this title screen is… quite something. 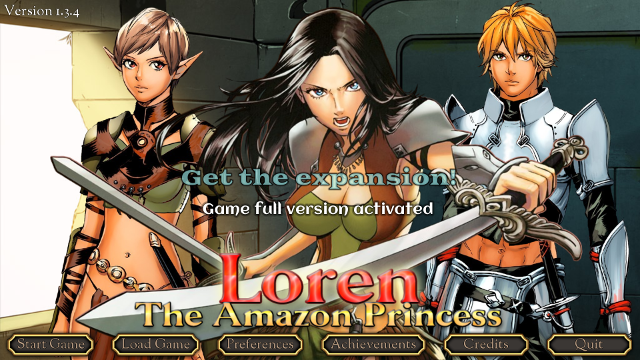 Let’s see, what have we got? Front and center, a Boobs Amazon, Strong Female Character-ing her swords in-between product advertisements — each in different garish colours and founds. To the right, a stoic-looking Knight Hunk with inexplicable bare midriff action. And to the left, a Sex Elf.

Okay, well. Don’t judge a book by its cover. Even though that’s what we literally do with all books everywhere. The Preferences section, at least, is perfectly servicable, and consistently cast in a nice yellow-brown colour scheme — with only one font! And there’s an achievements section that promises a lot of romance, a lot of fighting, and a lot of answers. 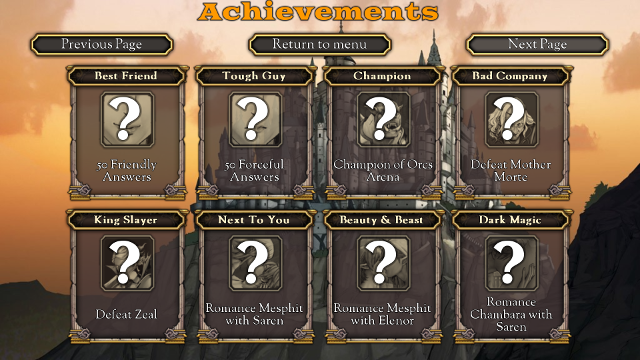 Probably not in the way I think.

But enough about that. We’re here to get our Amaz-ON. And I’m starting that right away… 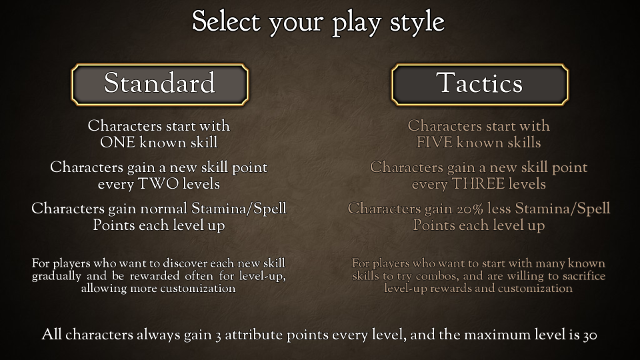 …just as soon as I select my play style and difficulty level.

This is promising to be an interesting visual novel experience.

The scene: a monastery. The time: a late hour. The actors: a hooded monk, a desk, and a quill. 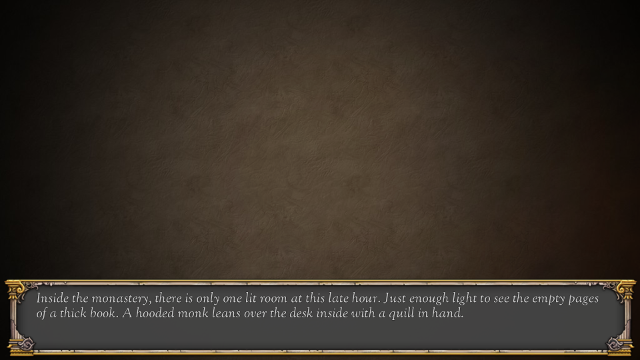 “I am the monk,” the monk says, and through my powers of being an outside observer I know this to be true. “I am here to write a tale so epic that I cannot sleep until it is told,” he says, and I roll my eyes. But sure. “So here I write: “The Tale of the Amazon Princess Loren.””

Then the scene shifts again, presumably into the past. Now we’re at a castle. 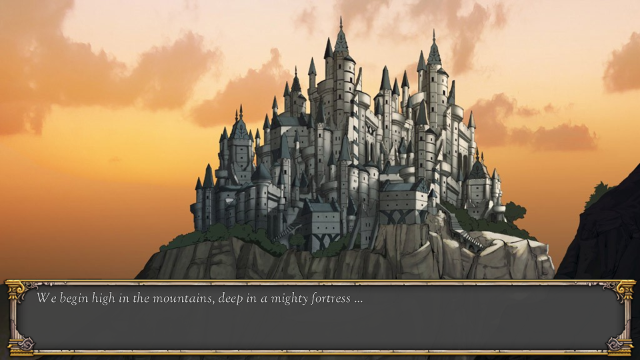 Yeah, okay. I’ll accept that this is a ‘mighty fortress’. I wouldn’t want to be the siege army for *this* place.

And in that castle lives a princess. 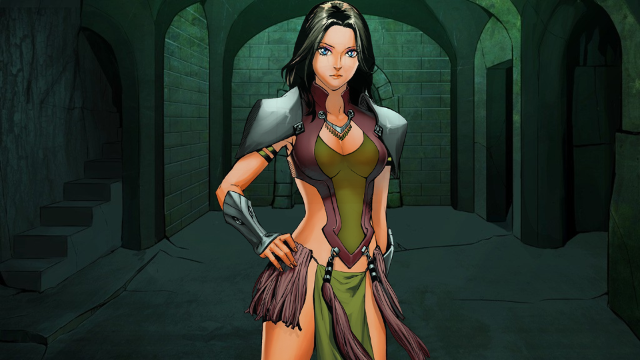 You might notice she’s *fading into view* a little — I was too quick on the screenshot button.

The story opens with Loren, titular Amazon Princess, wrecking some training dummies with her sword. I don’t actually see this happen, but it’s narrated in detail. Against a static backdrop of Loren and her lack of pants, I learn that her servants fix the training dummies every night, so she can re-wreck them every day. Also, she fights with two swords. I had an inkling of this from the title, but it’s nice to see it confirmed.

Loren wrecks the last dummy! She is then displeased at the lack of dummies left standing. One of her servants, which is to say slaves, brings up that she’s simply out. Loren responds by suggesting that maybe then one of the slaves should go fetch a sword. 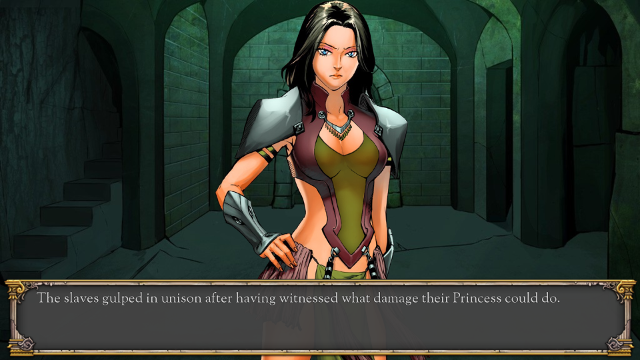 So unless I’m reading this wrong, our protagonist in the first ten screens of play have been characterized as (a) a slave-owner, and (b) someone willing to kill for fun.

If Loren The Amazon Princess is trying to go for some sort of Quickest Characterization As An Unsympathetic Jerk Award, they’re totally nailing it.

Loren’s prospective bloodsport is interrupted by the arrival of a griffin, and more importantly, a messenger. The Captain has returned! She comes bearing important news, and even less of a shirt than Loren. 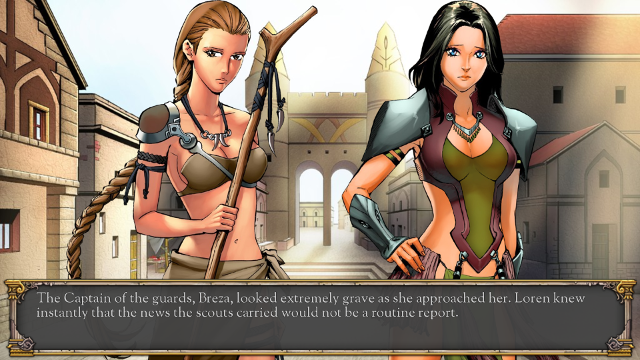 Nice braid, though. I respect that.

The long and the short of it is this: Loren’s mother, Queen Karen — Queen Karen? Really? That’s, that’s a great fantasy naming scheme there. Karen. Anyway, Queen Karen has been ‘lost’. She left the Amazon Citadel two weeks ago and nobody can find her. The Amazons are just about ready to write her off and appoint Loren as the new Queen. All Amazons, except Loren herself, who instead prepares to go look for her mother herself. Because if you want a job done right… 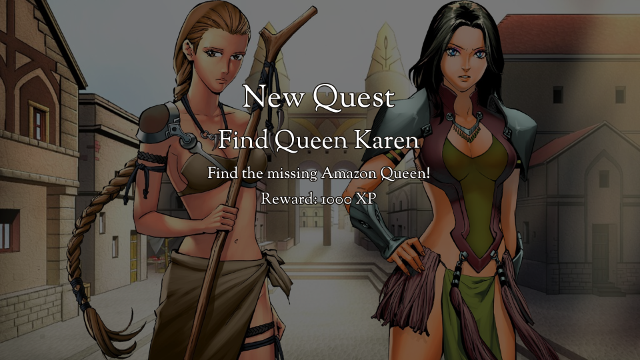 Loren has a *quest*.

“Press Q to see your active quests, and also to access the party management screen.” Don’t mind if I do, Loren The Amazon Princess! I have to say, this game is feeling much more like a traditional RPG than I’d have expected. Not many visual novels come prepared with a full equipment system and several character-specific skill trees. 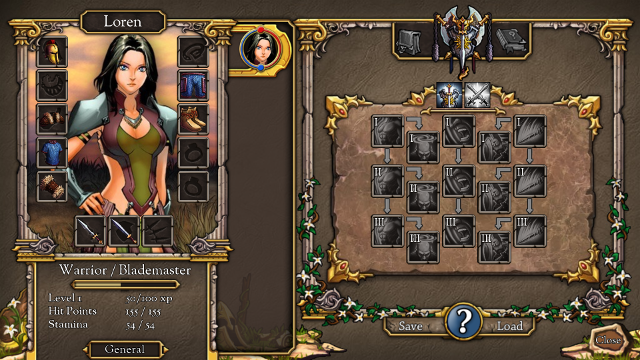 “Sure, this is a visual novel.” — someone who is either a doofus, or a visionary.

Finally, Breza relents. If Loren is to leave the Citadel, she should at least get the help of a ‘capable individual’. It’s at this moment that the monk writing this story stops, scratches their head, and goes ‘now who was that person again?’ 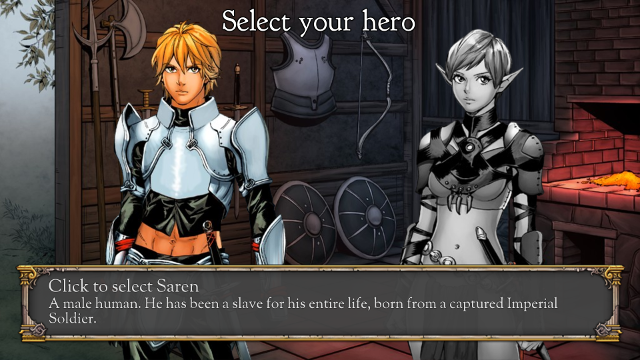 “Loren is a powerful fighter,” the game itself quickly interjects — or maybe that’s the monk again — “but lacks healing skills. Your playable character has the specialization class “Hero” that will be very helpful throughout the whole game.” And… wow. Not even going for a little bit of ludonarrative harmony here, huh, are you? ‘Hey, your character is a hero that can heal, and that’s why they’re you’re character!’ It’s about as subtle as Loren’s fetish-fuel outfit. Or Breza’s outfit. Or Elenor’s outfit. Or…

An introduction scene plays out. Elenor has been a slave for the Amazons all her life, after she was ‘found’ starving and freezing as a baby. She serves the Amazons dutifully, as a ranged combatant and a healer, and she has the following stats: 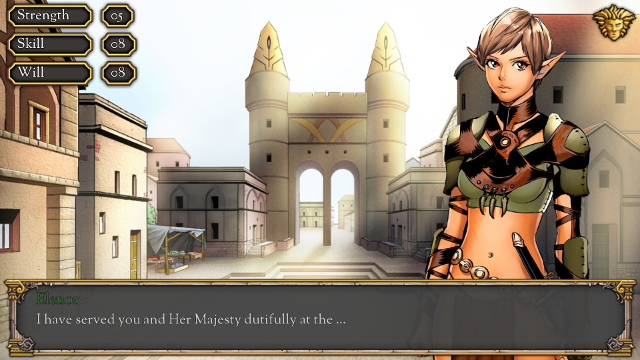 Just so you know.

A Choose-Your-Own-Adventure plays out. Elenor served the Queen in the… Royal Palace, +2 Skill. 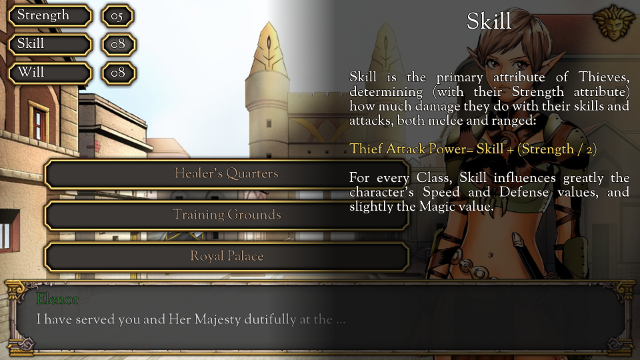 Elenor did good at the… target challenge, +2 Skill, and a crossbow. Elenor protected the Queen by… talking down some thugs, +2 Wisdom. Elenor owns an… enchanted ring. Elenor very specifically served the Queen as a… 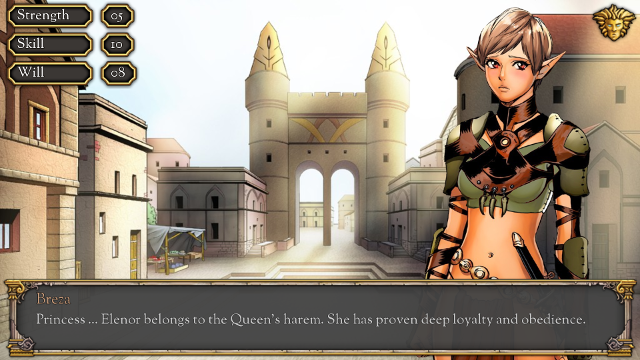 Oh for *fuck’s* sake. I didn’t even choose this intentionally! I don’t even know *if* I chose this! 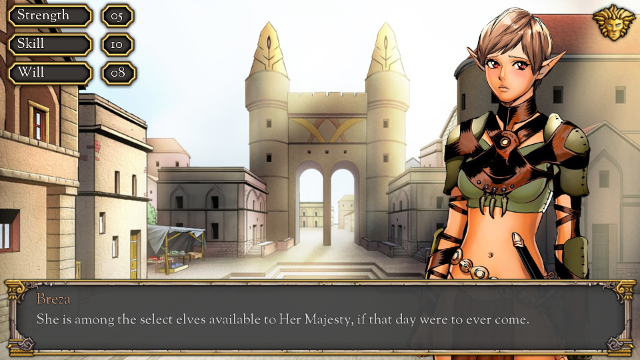 And then it got worse. 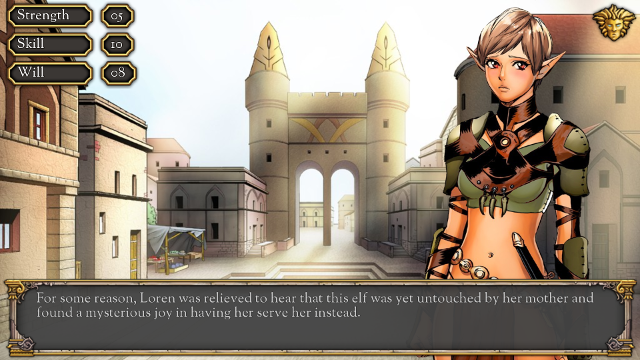 I swear to god, if this doesn’t stop here, I’m turning this review around. 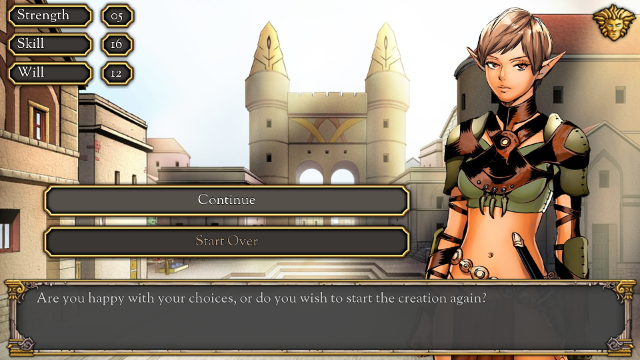 That look says “I *dare* you to pull me through that shitshow again.

Then I get to pick a difficulty. 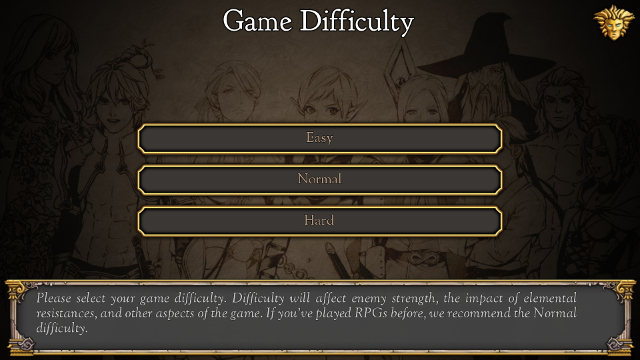 I thought I already did that earlier?

First stop on the trip: buying items in the Citadel, which we haven’t actually left. I don’t know what this game wants from me anymore. 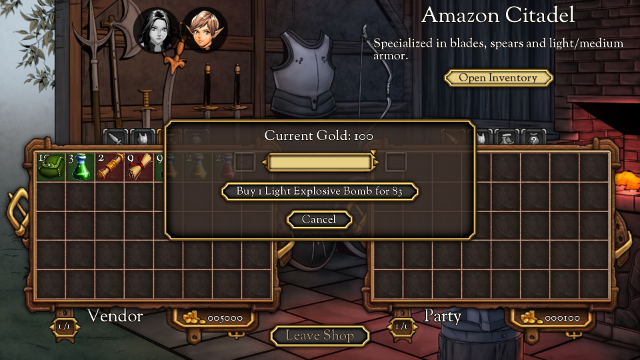 Sometimes you just can’t get rid of a bomb.

And then we’re off! For real this time.

The journey is simple enough at first. Loren decides we’re going to the human town of Grimoire, so that’s where we’re going. Elenor plays the role of the demure slave, because she knows she can literally get killed at the drop of a hat if Loren is out of target dummies again. It could actually be pretty interesting if the game takes this route further. Loren is obviously a jerk, and Elenor has to dance around her aggressive nature and her ingrained privilege. Loren takes an aggressive posture, and Elenor immediately fears for her life. At night, Elenor only gets Loren to make camp by pretending she herself is exhausting to collapsing — even though it’s Loren who needs the rest the most. 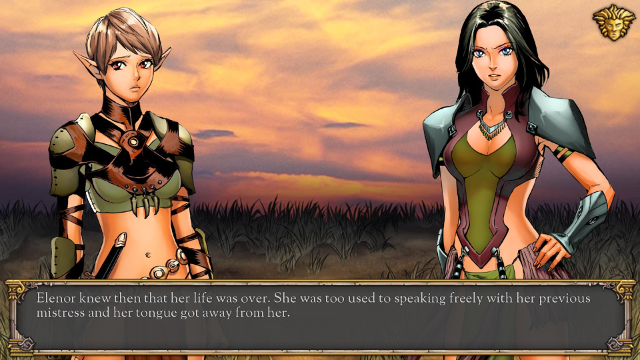 Spoiler: Elenor’s life was not over.

Then it turns out that Loren has never been in the wider world before, and that she literally can’t tell the difference between a human town and a mountain. And she barely believes that non-Amazons can build structures. 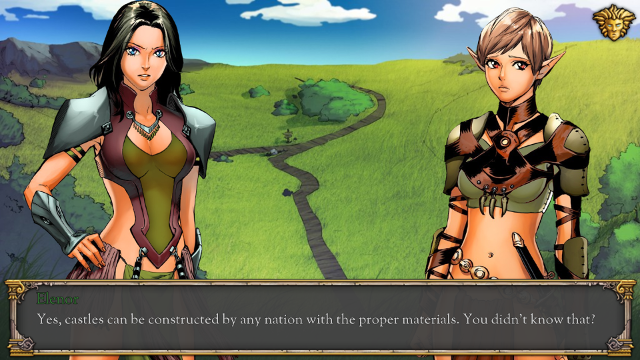 And that firmly shifts the relationship more into sass-or-be-sassed-ville.

Suddenly (by which I mean, after an optional camp-and-chat scene), goblins happen! It’s a fight! Elenor realizes that Loren has never seen the outside world before, so she probably has no idea of the rigors of actual combat — of training dummies that can fight back! It’s up to her to protect the princess!

Except that’s a lie, because then a battle screen starts and it turns out Loren has far superior combat stats to Elenor. 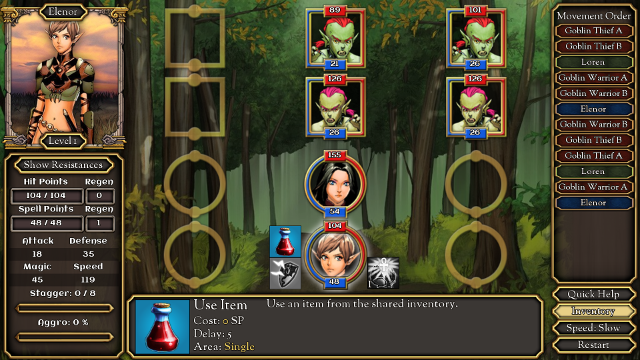 Look at the numbers! They’re higher than the other numbers!

I gotta say, I didn’t expect a full-fledged turn-based JRPG combat system in my visual novel. But here we are. On the right, a movement order system, not unlike what I remember from games like Final Fantasy X. And on the left, a slew of stats, sub-stats, and derived stats. What the hell is ‘stagger’?

Through the medium of one tutorial pop-up and some experimentation, I learn how this stuff works. It’s obviously turn-based, with the character in-picture on the left — not the one at the top of the movement order — taking their turn. Actions are taken by clicking on characters to see a popup menu. If I click on a friendly character, the actions are related to using items, defending, and healing. If I click on an enemy character… Well, you get the idea. 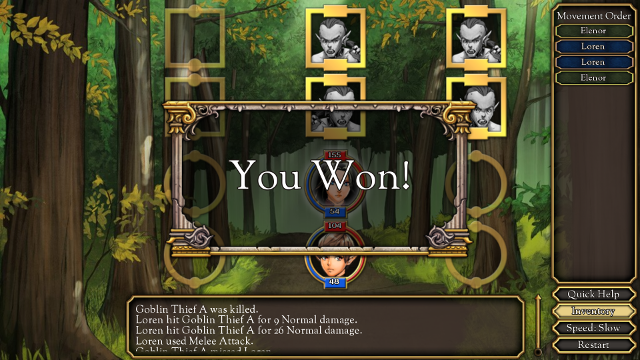 We defeat the goblins, gain EXP, gold, and a shortbow, and rescue a man hanging from the tree. He turns out to be a blond half-elf, dressed in colourful robes, who introduces himself as Draco, fire wizard extraordinaire. He’s so obviously a new party member that Loren kicks him straight in the chest, and threatens him at sword point to go away and never come back. That‘ll stick, I’m pretty sure. 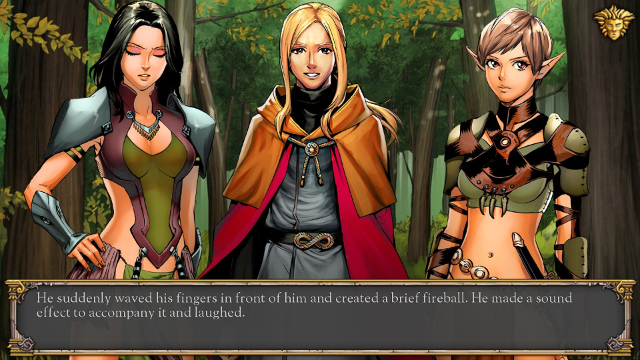 “Let’s spend all this effort designing this character and establishing them in the world, and then retire them after a single two-minute scene!” — no single character designer, ever.

And just like that, Elenor and Loren arrive at the human city of Grimoire. Minor quest completed! 100 XP to all. Loren decides to go look for clues, which I assume means ‘stomp all up and down the city demanding answers from people she deems lesser, i.e. men‘, and Elenor decides to try and keep Loren out of trouble. I actually don’t know what that would look like, given the master/slave dynamic they have going on? But at the very least it might be funny.

I’m gonna call the play-by-play here, though. First quest completed, that seems like a good point. Even if it didn’t take me much more than thirty minutes to get there. But I’ll check back with you after we’ve ran into misadventures, after Draco resurfaces/joins the party, AND SLASH OR after I rescue Queen Karen.