Following an unprecedented two concurrent reader recommendations — I really hope this doesn’t come off as a mean-spirited burn, I love you guys — I’ve decided to this week take a look at Solstice. Created by MoaCube, developers of Cinders [official site], Solstice… looks a lot like Cinders 2.0? Both mechanically, and with respect to art style, I feel like I’ve seen this before. Except that Cinders was very clearly based on the Cinderella story. But Solstice… maybe it’s a Ice Queen adaptation, like Frozen? Am I going to be buddying up to existentially oblivious snowmen any time soon? Probably not. But still, only one way to find out.

Well, this is an interesting opening screen. Snow, ice, and an aurora borealis, more or less as expected. But then there’s sort of a Moorish/Islam-architecture style city in the distance? With what looks to be a magical shield around it? It certainly contrasts to the various steel pipes dotting the landscape, which seem to transmit some combination of water and heat — if the blooming plants around them are any indication. 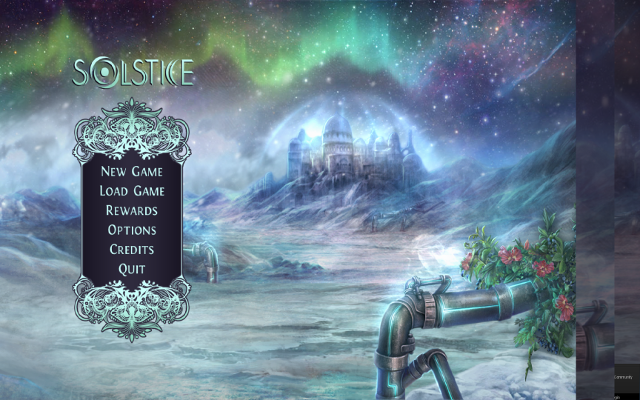 Don’t pay any attention to the weird visual effects on the right. It wasn’t actually like that during play; for some reason, Fraps decided to make a mark on these screenshots.

While I don’t want to make this whole review a litany of ‘like Cinders…’, it’s almost unavoidable at this stage. For instance, like Cinders, Solstice has very limited audio and graphical options, and nothing else — I hope you like your music either Full Blast or Not At All, because there’s no middle ground. And like Cinders, Solstice promises a codified system of endings and ending variants, complete with vaguely-titled trophy achievements to engender replay. 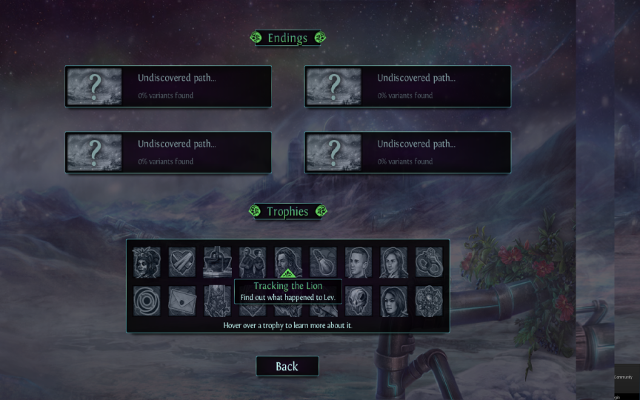 That didn’t do much for me with Cinders, either.

But you know one thing that Cinders doesn’t have? A woman freezing to death for no clear reason in the first five minutes of the game! 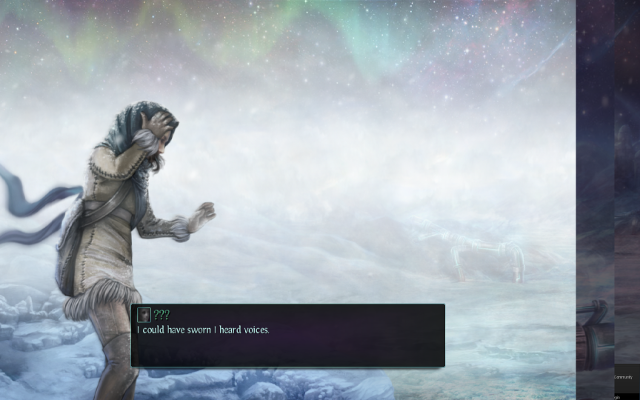 Solstice opens on a white-out blizzard, with only the vaguest hint of arctic ice and pipes visible in the blur. A woman walks into the scene, clearly struggling against the (neatly animated) snow and wind. “So… odd,” I think she says, because the text goes unattributed. “I could have sworn I heard voices.” She slowly struggles forward, all the while muttering to herself; about the injustice of it all, about a cowardly caravan driver, and about the chancellor that seems to have sent her to this frozen waste. Is this… is this my viewpoint character? It certainly seems that way, and I’m not exactly complaining; I just prefer my VN viewpoint characters to be less imminently doomed.

Suddenly, the white-out clears, and Nameless Woman spots the city from the title screen in the distance. The Jewel of the North! 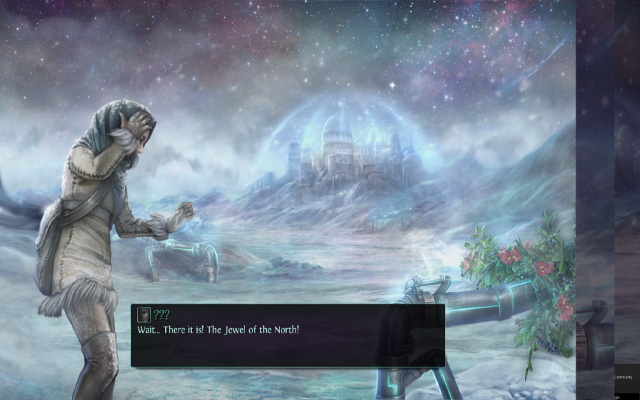 She doesn’t give it any other name, so I’m gonna choose to believe that that’s actually what this city is called.

Nameless Woman babbles for a moment about how great the city looks, how she wasn’t prepared, and how ‘the others must have added to it’. Then she notices that the nearby pipes are sort of warm, and decides to take a quick nap next to them. Sadly, there’s no obvious option to not succumb to hypothermia, so I guess this’ll be a shorter review than we’re all used to.

The woman goes down, which is to say that her sprite slumps beyond the bottom of the screen. The screen then pans to the left, where a casual-looking man appears to not notice he’s terribly under-dressed for a snowstorm. 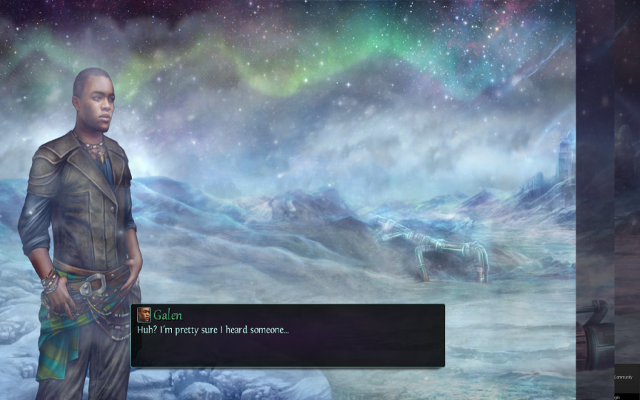 “I’m pretty sure I heard someone! Unless my ears and hearing have frozen.”

At least this dude has a name. Hey there, ‘Galen’. What are you doing out here in the snow? In your desert explorer outfit? “I’m pretty sure I heard someone,” you say, but unless Frozen Lady over there is mumbling in her sleep…

“Then maybe it’s time to wake up?” a mystery voice answers. “You’re almost there.” This is followed by a translucent woman appearing from thin air. 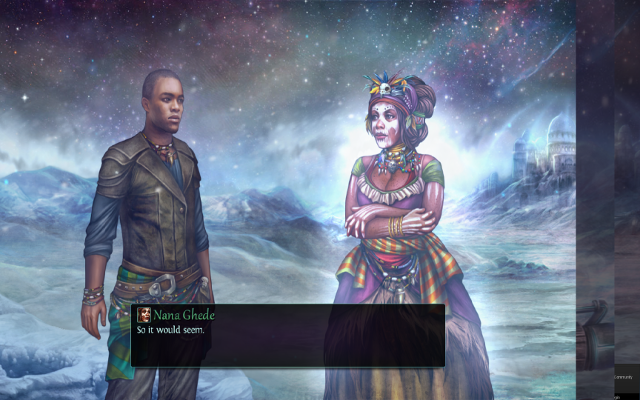 So I think that at this point, ‘communal ice madness’ is as good an explanation for this series of events as anything else.

The weirdest part about this whole affair is that I know this woman. Which is to say that I, Jarenth, recognize this character as having been in Cinders. So you can’t blame me for making that link this time. This also unveils the intriguing reality that Solstice and Cinders share a setting (broadly). Do I sense more cameos in the future? Time will tell.

In the immediate present, I learn that Galen here is apparently Madam Ghede — sorry, ‘Nana Ghede’ — grandson. And that he’s dreaming. He specifically mentions that it’s weird to see his grandmother in this odd getup, and I’m choosing not to go into that any further. 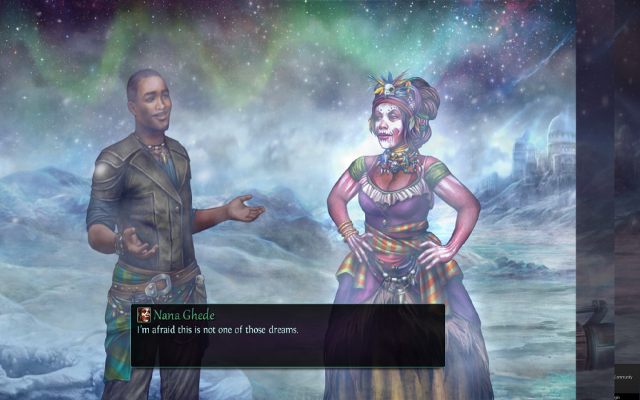 I’ll spare you a blow-by-blow recount: Galen here is also trying to get to the Jewel of the North. Nana Ghede offers up some cryptic warnings, which coalesce into a gameplay tutorial — sometimes you can choose what to say, and later in the game you’ll be notified whenever a present event has been changed as a result of past choices. Tip to toe, just like Cinders! 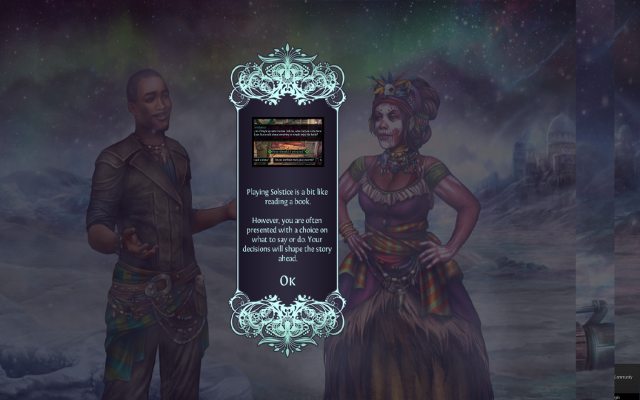 I’m not sure how I feel about tutorials on visual novels. I *guess* Solstice is complex enough that it’s worth explaining the mechanics better? 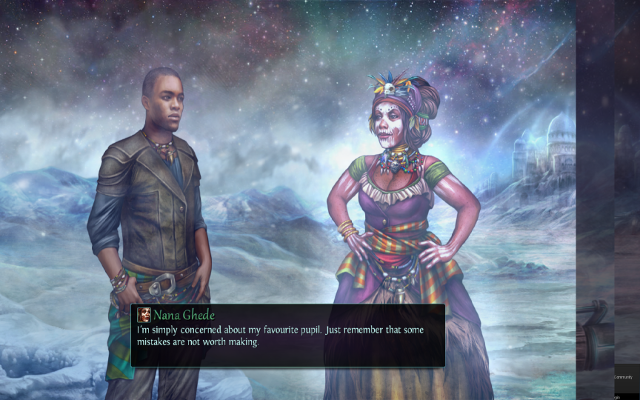 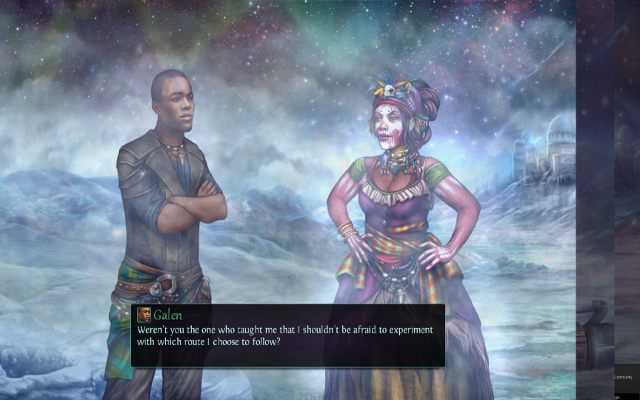 ‘But if you want to quicksave before a choice and reload, that’s good too!’

Then Galen wakes up, and his caravan moves toward the distant city — briefly stopping to pick up a sleeping frostbitten woman, who I guess should count herself lucky. And then we all arrive at the city! 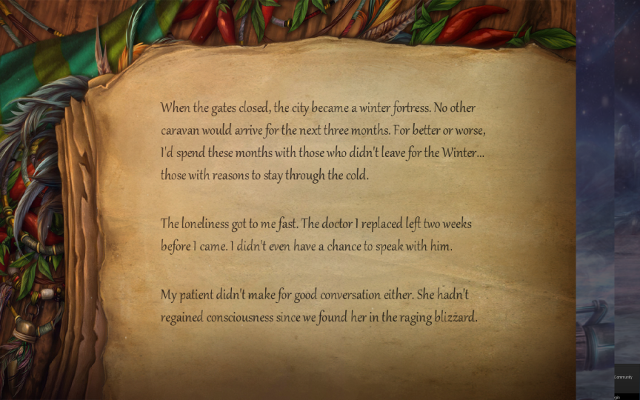 Then we all arrive at several paper scrolls, explaining the backstory of getting into the city thusfar!

Summary: Galen has traveled to the Jewel of North, also called the City of Ice. Located in an arctic wasteland, the city is tough to reach under the best of circumstances — but three months of every year form the True Winter, during which no caravans even make the trip. Galen’s a doctor, sent here to replace the previous doctor, who disappeared. You’d figure a city that size would have multiple doctors, but you’d be wrong — because you have no idea how small this city actually is. Only about a dozen people stay on during the True Winter period. And now Galen’s one of them, and he’s aching to meet the others.

First up, Yakone, the caravan driver who got him here. Who I’d figure he had enough time to get to know during the trip, but whatever. 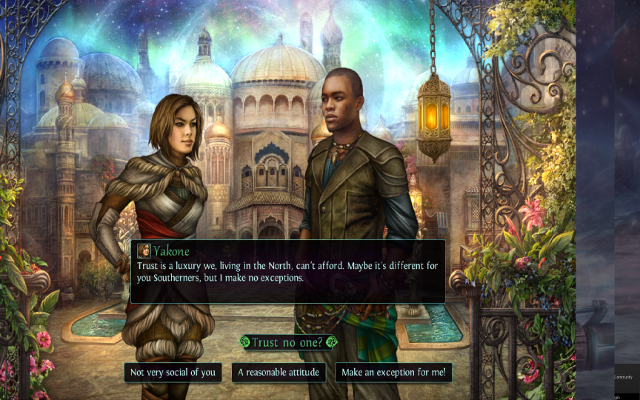 Yakone wastes no time in setting up her character archetype.

I can’t help but notice Galen still wearing his summertime outfit. Part of me wants to attribute this to the artists not wanting to create multiple outfits for each character, cynical an outlook as that would be. But it’d be silly if this turned out another dream sequence. Luckily, Galen handily prompts Yakone for some world-building: the City of Ice is warmed by subterranean hot springs, the warm water of which is pumped around the city through the aforementioned pipes. And the magical shield we saw earlier? That’s actually a magical shield. It keeps the warmth in and the snow out. 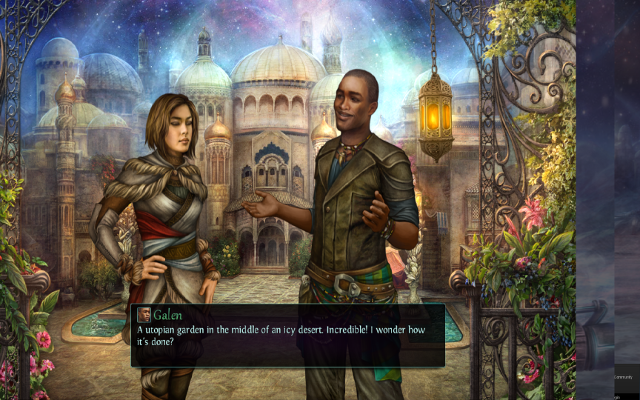 Galen takes note of this. 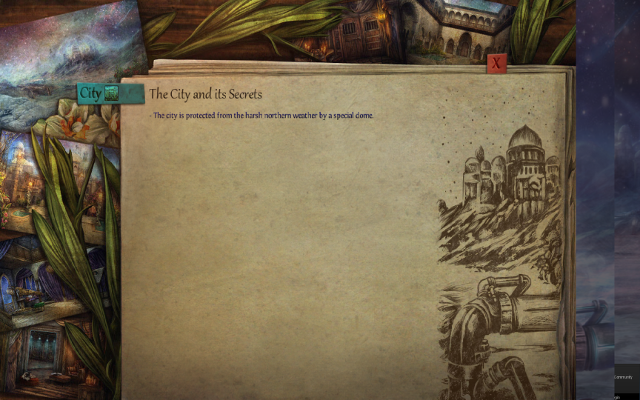 In this fancy journal section, but also literally in the story — he pulls out a notebook and writes it down, to the amusement of Yakone.

Next stop on our whirlwind meet-the-locals tour is Kasiya, the capably ginger Captain of the Guard. 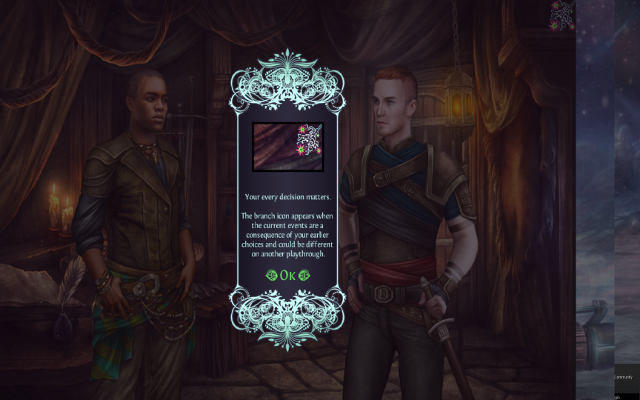 Here we actually learn about the choice-signaling mechanic — the way I talked to Yakone earlier is reflected here.

There’s also an incredibly fancy bathhouse. I mean, bathhouses in and by themselves are fancy by design, but this one takes the cake. A veritable sauna oasis in a magical greenhouse city in the middle of an arctic desert? Something tells me that, if I was stuck in this city for three months, I’d probably be spending most of my time here. 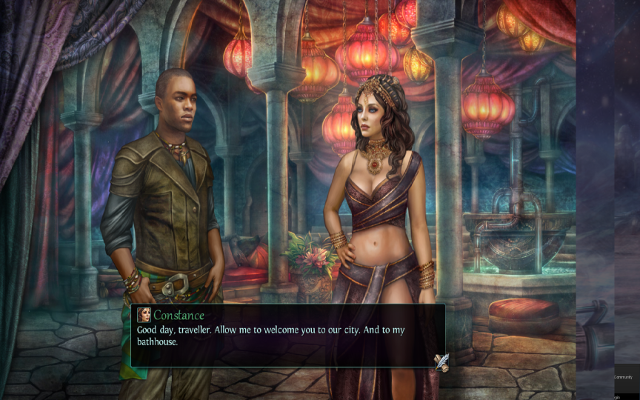 Because of the warm water. Obviously. Just baths, no ulterior motives.

In rapid order, I meet: Sem, the loner master of the kennels, who prefers his dogs to people. Istvan, the retired ruler, and de facto ruling power in the City of Ice. Slava, the innkeeper. And Slava’s husband, Lev. 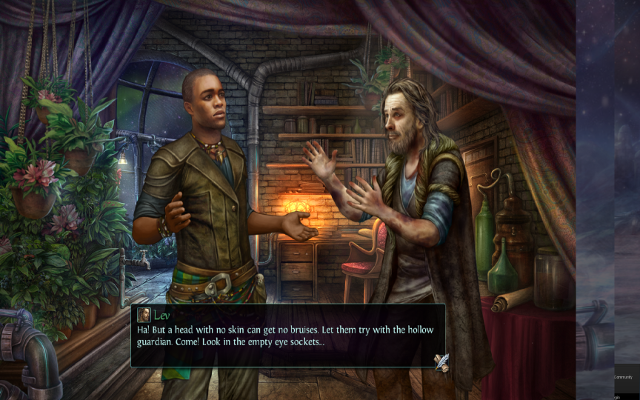 Lev is an interesting fellow.

Meeting Lev is actually the point where Solstice moves into its first chapter proper. One splash screen after his unannounced visit later, I find myself some time in the future — two weeks or so, from context clues. Galen is just talking to his former frozen patient, now recovered… 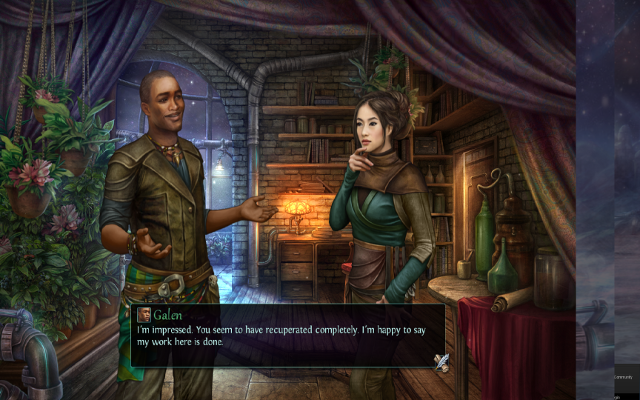 ‘Should we talk about why you were walking in a snowstorm to begin with? No?’

…when Slava bursts in, panicked, and asks Galen to help her find Lev. He hasn’t been seen for ten days, ever since he left this office in one of his deluded states. Galen, being the sweetie that he is — which is to say, the sweetie that I through conversation options make him be — agrees to help.

And then an interesting thing happens.

See, playing through this initially, I felt this would probably be a good point to cut the first page play-by-play. We’ve seen the mechanics, we’ve seen the art, we’ve heard the opening beats of the story. And now that it’s getting interesting, I can cut away, play more in the privacy of not writing about it, and then do my overview thing on the second page. It looked like a good plan, and I felt confident about it while guiding Galen to Kasiya to ask for help, then to Constance to get some ‘information’, and then back to Slava to report…

…at which point my viewpoint suddenly snaps back in time, and I find myself to be Yani. 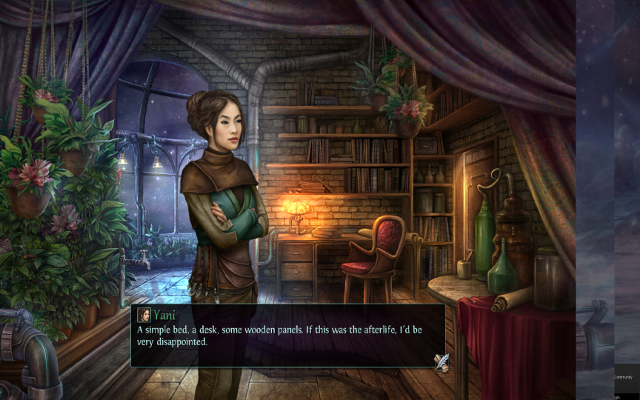 You remember her? She almost froze and stuff, it was scary.

As Yani, I briefly play through the exact same story as before — Galen comes in to check up, the two of them make small talk, then Slava bursts in to ask for help. Except from a different angle. This time, when Galen goes to play hero, I-the-player don’t go with him. I stick with Yani instead, who mumbles out loud about her secret mission, and then decides to make the acquaintance of the leading powers in the city. 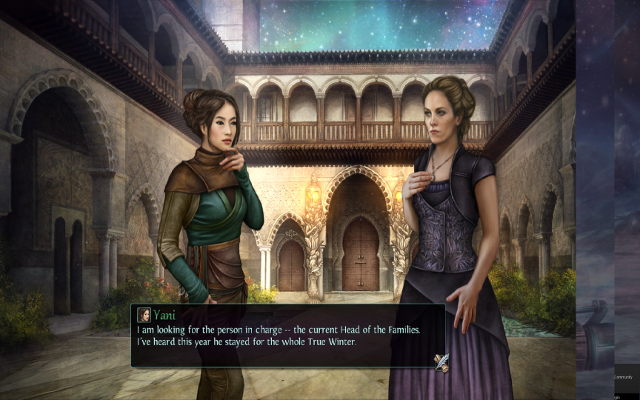 Laura here is not in charge, but don’t underestimate her — she’s essentially the boss’ secretary, and anyone who doesn’t know what kind of power executive secretaries wield has never had the bad fortune of pissing one off.

Anyway, no sooner do I take control of Yani than the story actually kicks into high gear — with a pressure surge through the city’s power systems that blows up a lamp, and foreshadows a catastrophic breakdown that could break the shield, cool the hot springs, and doom everyone to freeze in the arctic shell of their once-glorious city. 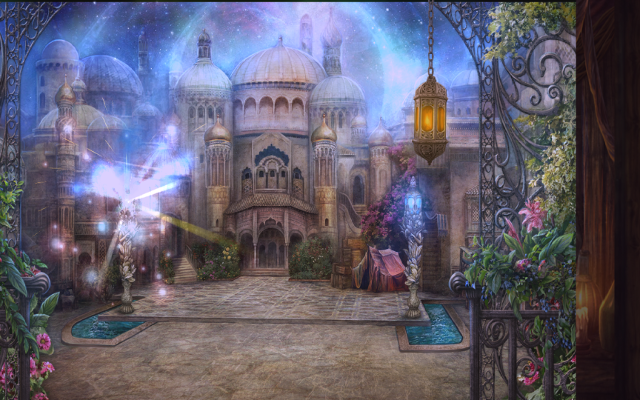 They won’t even have their lamp to light the way anymore.

Let’s just go see if I can’t prevent that, shall we?